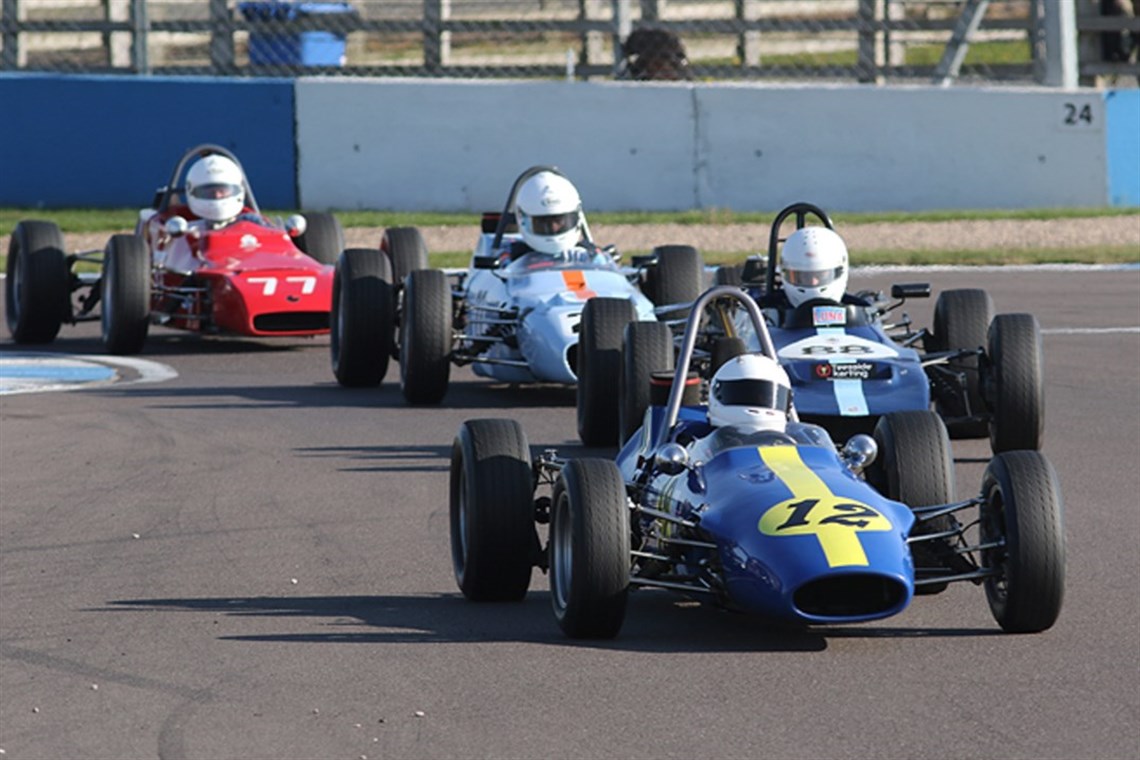 As well as four races for the HSCC Historic Formula Ford Championship, the weekend features a past champions’ photo call and a grid walk-about. On each day, the Formula Fords will come to the grid during the lunch break to allow photo calls and interviews before the races start.

In the Historic Formula Ford races, Callum Grant heads the field after a double win at Cadwell Park but he faces a fantastic field including Michael O’Brien, Richard Tarling, Benn Tilley and three members of the Mitchell family as regular contender Sam is joined by his elder brother Ben and father Westie.

Father and son pairing Graeme and James Dodd will be at the sharp end of Saturday’s second round of the Jaguar Classic Challenge along with Jamie Boot, Steve Skipworth/James Dean and the car shared by Sam Thomas and BTCC star Colin Turkington.

The timeless Chevron B6/B8 design continues to be the car to have in the Guards Trophy and they are likely to set the pace at Brands, topped by Charles Allison, Philip Nelson and father and son Hugh and Mark Colman. Leading open cockpit entries include the Brabham BT5 of Thomas and Turkington.

The GT division is headed by the stunning Shelby Daytona Cobra of Leo Voyazides and Simon Hadfield, and rivals to the Cobra at Brands include the TVR Griffiths of Mike Gardiner/Dan Cox, John Spiers and Peter Thompson/Mark Hales.

Voyazides and Hadfield will also head the Pre ’80 Endurance field in the stunning Gitanes-livered Lola T282, aiming to repeat their 2016 Brands Hatch victory in the hour-long, pit-stop race.

The cars from the HSCC Super Touring Challenge are back on track for the third meeting in the five-event, 10-race 2017 season. It was 2014 series winner James Dodd who took a commanding double at Donington and he tops the entry for Brands.

Another excellent grid of iconic production sports cars from the 1960s will contest round five of the HSCC Historic Road Sports Championship, with three mighty Morgan Plus 8s aiming to stop Peter Shaw’s Lotus Elan winning again. Spearheading the Morgan onslaught is Will Plant in one of his father Richard’s Plus 8s. Will won the opening two races but missed Cadwell and 2015 champion Kevin Kivlochan is back in his Plus 8 after clashing commitments kept him away from Donington and Cadwell. Philip Goddard is the third of the Morgan trio and will be in the mix.

Big powerful single-seaters always deliver a fantastic spectacle on the Brands Hatch Grand Prix circuit and that’s sure to be the case in the pair of races for the Derek Bell Trophy. On Saturday the cars will share a grid with the Classic Formula 3 cars, while on Sunday the DBT pack will have a stand-alone race.

Stars of the show will be at least five Formula 5000s using thundering 5-litre Chevrolet engines. The line-up will include Neil Glover in the unique ex-Peter Gethin Chevron B37, hard charging Jamie Brashaw in his March 73A, Frank Lyons in his gorgeous Gurney Eagle FA74 and Paul Campfield (Chevron B24).

After sharing a grid with the Derek Bell Trophy field on Saturday, contenders in the HSCC Classic Formula 3 Championship switch to a shared grid with the cars in the Classic Racing Car Series on Sunday.

The Classic Racing Car field includes several 1600cc Formula 2 and Formula Atlantic cars from the late 1960s and early 1970s, including the rare Winkelman WDB2 of Robs Lamplough, the Lotus 59 of Mark Goodyear and the March 712 of Lorraine Gathercole.

Heading the field are defending champion Andrew Park and 2014 champion Benn Simms and with four wins from five rounds to date, Cumbria-based Park is already well on target to retain his crown. However, Simms is a formidable rival and their battle should be a fine curtain-closer for the weekend.

A fine field of cars will contest round five of the HSCC 70s Road Sports Championship on Sunday afternoon. Charles Barter won the season opener at Donington Park and won in his Datsun 204Z after a mighty battle with 2015 champion Jim Dean in his Lotus Europa. However, since then Julian Barter has won three times in his Lotus Elan and showed his father no mercy on Father’s Day at Cadwell Park as he beat the 240Z to complete a brace of wins.

The final race on Saturday afternoon is round five of 11 in the HSCC Historic Touring Car Championship when Warren Briggs (Ford Mustang) and Jack Drury (Ford Falcon) will vie for victory if Drury’s car is all back together after a hefty shunt at Cadwell Park. Snapping at the heels of the V8 muscle cars will be the leading Lotus Cortinas, notably the cars of Ben Winrow, young James Clarke, series newcomer and former Porsche racer Pete Chambers and Richard Belcher.

Opening the racing on Saturday will be a bumper grid for the FJHRA/HSCC Silverline Historic Formula Junior Championship. Heading the championship standings after a recent double-header round at Cadwell Park is Crispian Besley who is having a fine campaign in his class C2 Cooper T56. However, at the head of the rear-engined pack will be Cameron Jackson (Brabham BT2), teenager Benn Tilley and Michael Hibberd (Lotus 22s) and Mark Shaw in his ex-Denny Hulme Brabham BT6.