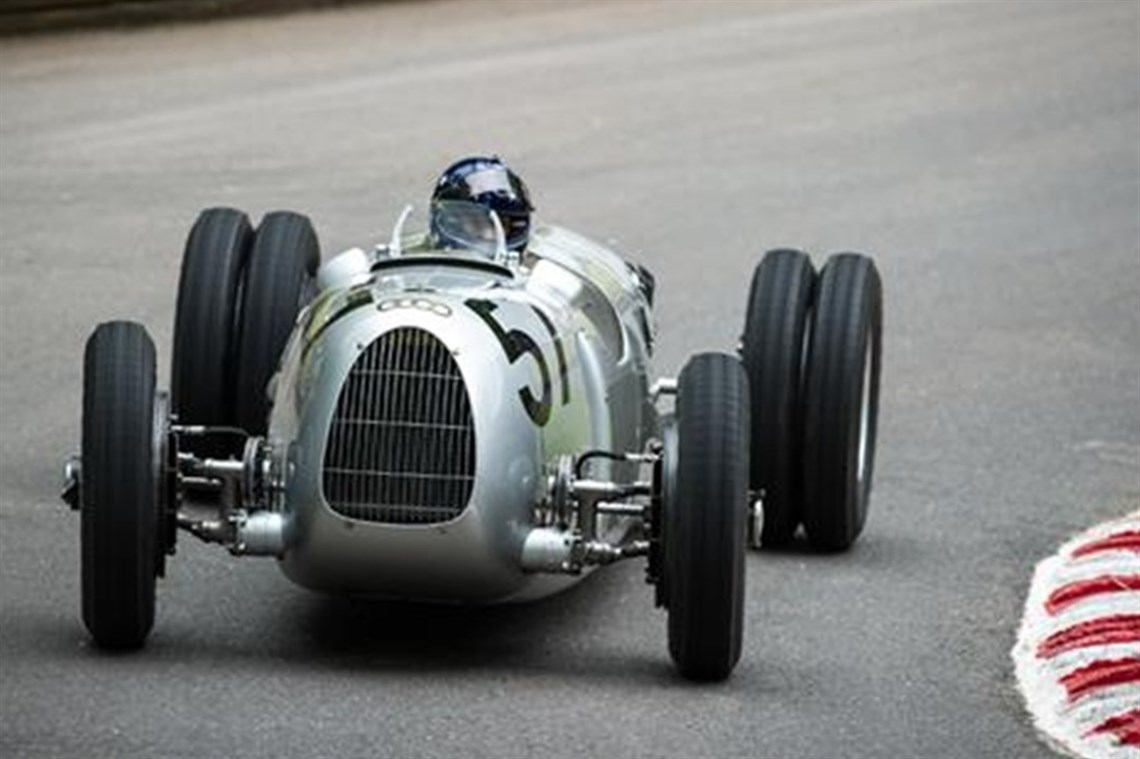 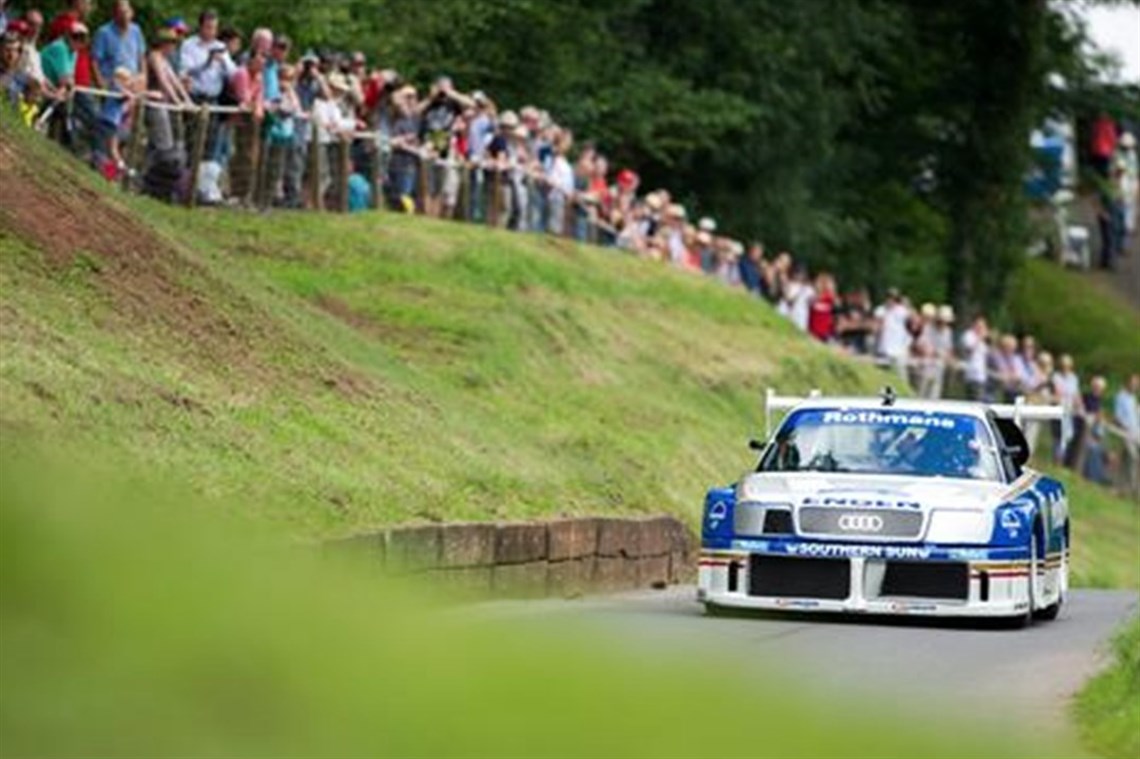 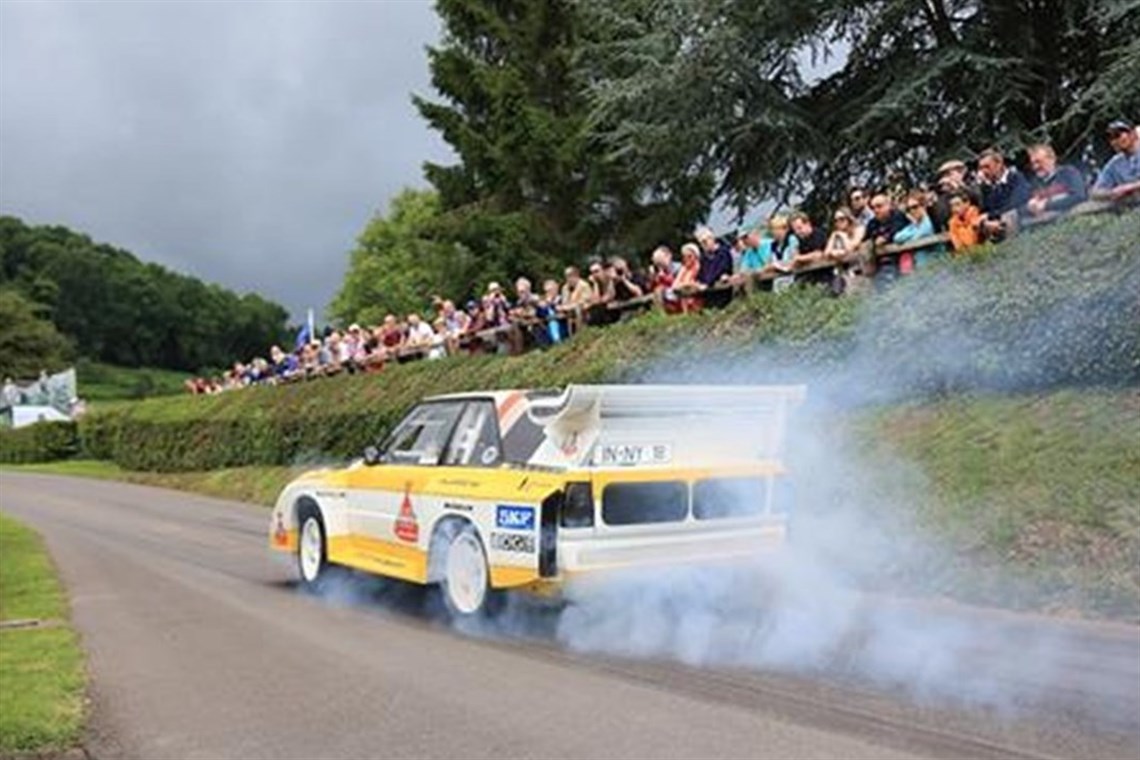 Jimmy McRae on the startline in the Prodrive Metro 6R4. Photo. Mark Constanduros 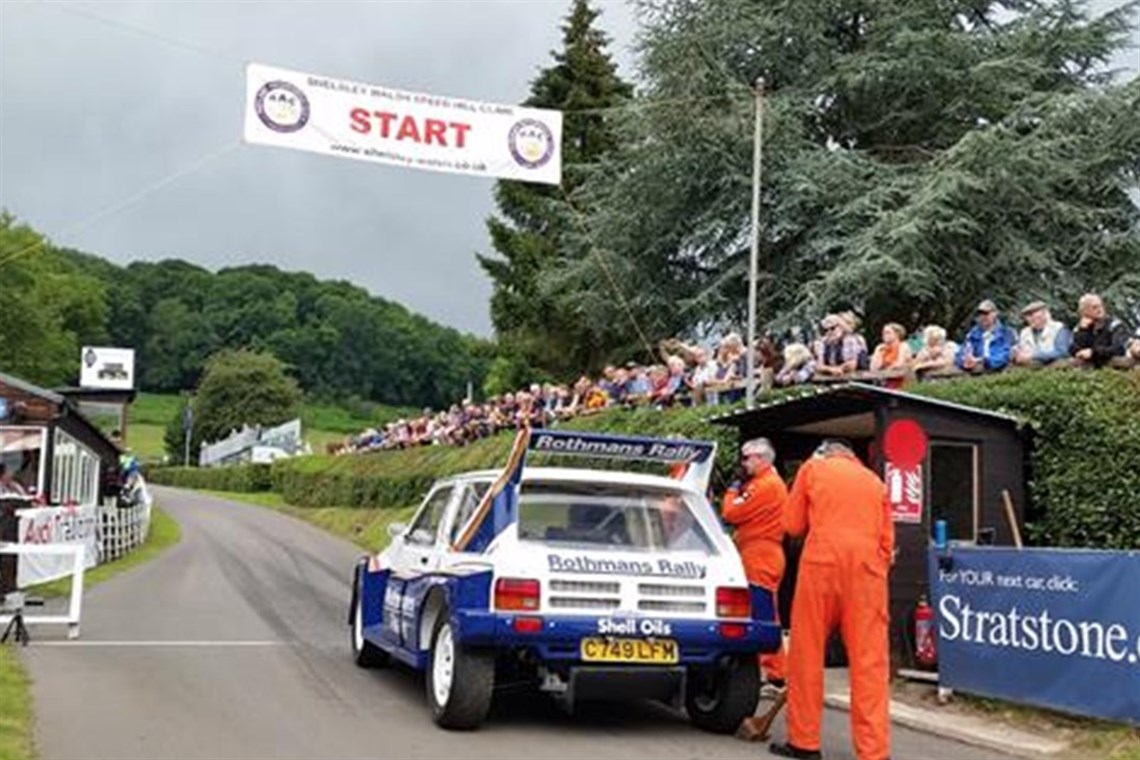 Twice a winner at Le Mans and a former F1 driver Hans was guest of honour at the meeting and followed in the footsteps of his late father the legendary Hans Stuck, who exactly 80 years ago drove a similar V16 Auto Union Grand Prix car up the iconic hill in front of the same sorts of large number of spectators.

Hans, said: "This place and these crowds are absolutely magical and I won't be shy with you, I actually had tears in my eyes coming back down from my first run - just thinking about my father doing the very same thing in the same car those many years ago.

"My reception here this weekend has been simply wonderful and I am delighted to have been able to put on a show with this famous car for so many people who have all shown such interest, enthusiasm and appreciation."

Hans-Joachim Stuck also drove the Audi IMSA S4 GTO which was making its UK debut after arriving in this country only 6 weeks ago. This monster of a race car is capable of 190mph powered by a turbocharged five-cylinder, 20-valve racing engine creating 720 bhp. It certainly made the ground tremble as it took to the hill.

Another crowd pleasing aspect to the weekend was the appearance of 25 Group B rally cars from the 1980s period, which were eventually banned on safety reasons, but driven over the weekend once again by stars such as Jimmy McRae with his original co-driver Ian Grindrod, Russell Brookes with his co-driver Mike Broad and David Llewellyn in the Audi S1.

Jimmy McRae, commented: "I have just been reunited with the glorious Metro 6R4 which was always a crowd pleaser and these outrageous Group B cars still have a large following of avid fans, many of whom are here today to see and hear them in action once again."

Fellow rally driver Russell Brookes, was driving his former 1986 Opel Ascona in tarmac specification and in original Andrews Heat for Hire colours, saying: "This is a fabulous occasion and it is great to be meeting up with old cars and old friends but is does seem strange to be racing against the clock up such a very short length of track.

"Somebody once created the slogan 'the right crowd, and no crowding' and this weekend sums that saying up exactly. The atmosphere and organisation is simply exceptional and credit must go to the organisers for their efforts in creating such an occasion whereby people can celebrate our wonderful motoring heritage in all its forms."

A Concours d Elegance competition was staged for the first 100 cars to enter on the Sunday and this was won by Peter Prosser from Buckinghamshire with his 1935 MG Pillarless Magnette saloon, which will now be invited to be displayed on the MAC stand at November's NEC Classic Car Show.

Peter, said: "We were invited here today as guests of Stratstone and just happened to be in time to enter the competition, not really expecting much as this car is in regular use and has just completed a tour of Ireland with the MG Car Club. I have owned the car for 18 years having originally bought it from Australia and had it delivered to my home in pieces on four pallets, taking another four years for its restoration.

"You can imagine our surprise then when my wife Dot and I were awarded the top prize and we were thrilled to be presented with our trophy by Jimmy McRae, who then drove us up the hill - being very surprised at how nimble the car was - so much so that he was still smiling when we got back down!"

Adding to the weekend's festival atmosphere was live music and singing on a stage created in the Courtyard together with dancing displays in 1940s and 50s style. This was wonderfully enhanced by officials, vehicle support staff and members of the public being invited to dress in period costume to match the occasion and many many people entered into the spirit of the occasion and did exactly that.

On the track itself, competition was as fierce as ever through a wide range of varied machines dating back over the decades in various classes, hosting names such as Frazer Nash, MG, Cooper 500, Austin Healey, Lotus and Morgan, through to Austin Mini, Ford Mustang and Ferrari.
Best Time of Day on Saturday went to Nic Mann in his amazing home made Mannic Beattie Sports Libre car, which uses aircraft power as part of it engine, taking an ascent time of 25.47 seconds. Sunday saw a Best Time of Day for local man Keith Harris with a time of 29.18 seconds in his Chevron B25 racing car.

Saturday's class winners included Bill Tuer in a Morgan, Mark Brett in a Bellamy Ford, Martin Spencer in GN Spider 2, Malcolm Thorne in a Lotus Buick, Mike Gallery in a Morris Cooper S, Stuart Gilbert in an MGB GT V8, Thomas Robinson in an MG Midget, Finlay Mackintosh in a Cooper Mk6, Phoebe Rolt in an Elva FJ Junior, Richard Mason in and Austin Healey 3000, Tim Painter in a Metro 6R4 and Kevin Jones in a Renault 5 Turbo.

Sunday's separate event saw most of the above once again take class wins with the addition of Andrew Tippett in a Russell Alexis Formula Ford and James Smith in a 1968 Rellard Trials.

Also presented was a very special watch called the "Spirit Of Shelsley Walsh" which had been designed and made by Omologato, timing sponsor at the hill climb. This was presented to Chris Jaques who brought back the 1934 Maserati 8CM that Whitney Straight drove at Shelsley Walsh.
Looking back over the weekend, MAC committee member and event paddock marshal Tony Harrison, commented: "Yet again the accolades keep pouring in from competitors and visitors alike for this very special classic event here at Shelsley Walsh.

"For example, one competitor, Wayne Wilson is from Australia and competing in his 1968 Brabham BT21 and after this his first visit to Classic Nostalgia is already making plans to return next year and its easy to see why, the sight and sound of the Auto Union alone is mesmerising and you can watch people simply smiling at its pure power and presence.

"The crowds have been amazing and with awesome weather to boot we believe this could well be a record attendance. The Group B rally cars have also been such a huge success, so this event could be a very hard act to follow!"

Mark Constanduros, Commercial Manager for the Midland Automobile Club commented: "Several years of hard work paid off this weekend. To see Hans-Joachim Stuck drive his father's Auto Union was a very special moment. He is such a lovely guy who fell in love with Shelsley Walsh.

"And to also have three British Rally Champions here with 9 titles between them was a joy. They were all a bit like naughty school boys, great fun to be with."

"Not sure how we will follow this up, but there are ideas!"

An iconic, immaculate and very successful car with great provenance

Wolf GB08S with V8 engine. Car only did testing and is fully revised. Features assisted steering.