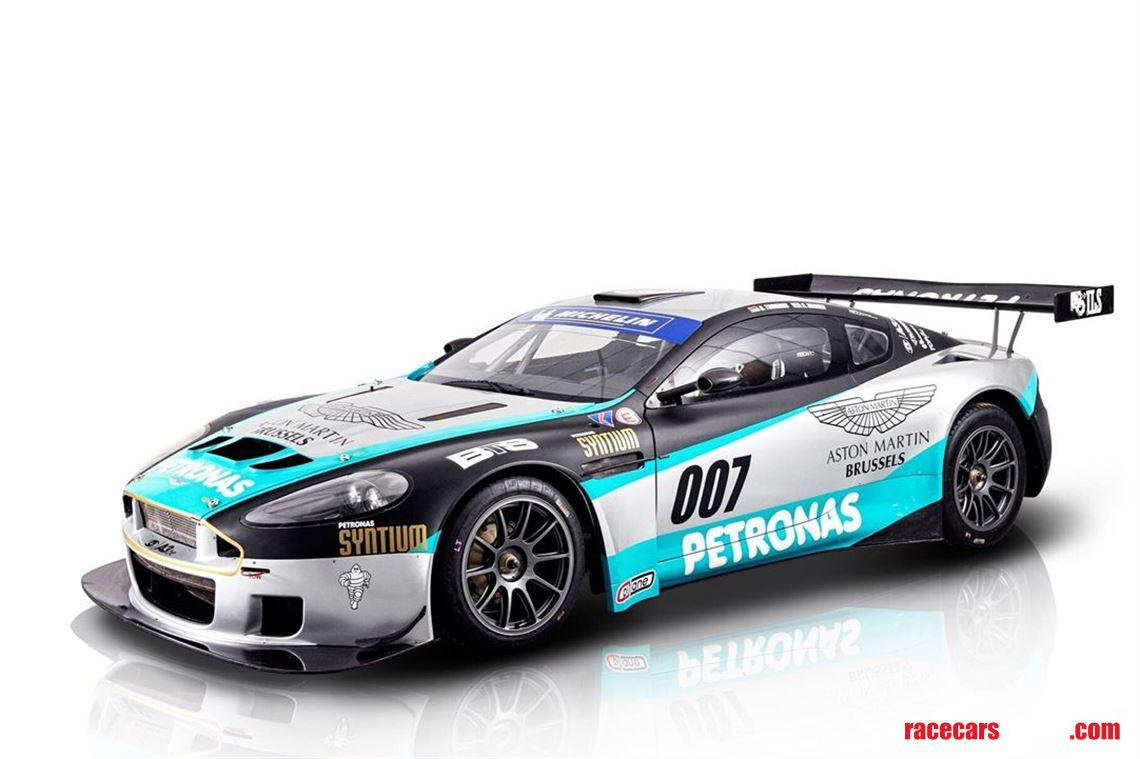 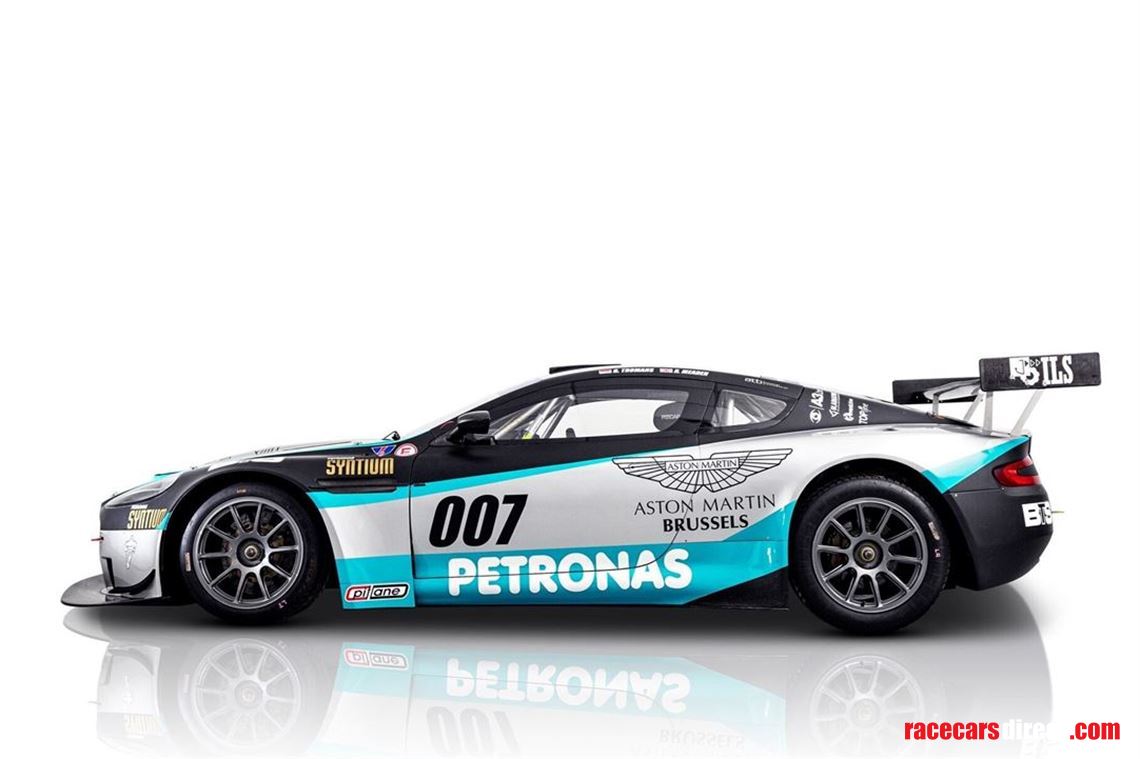 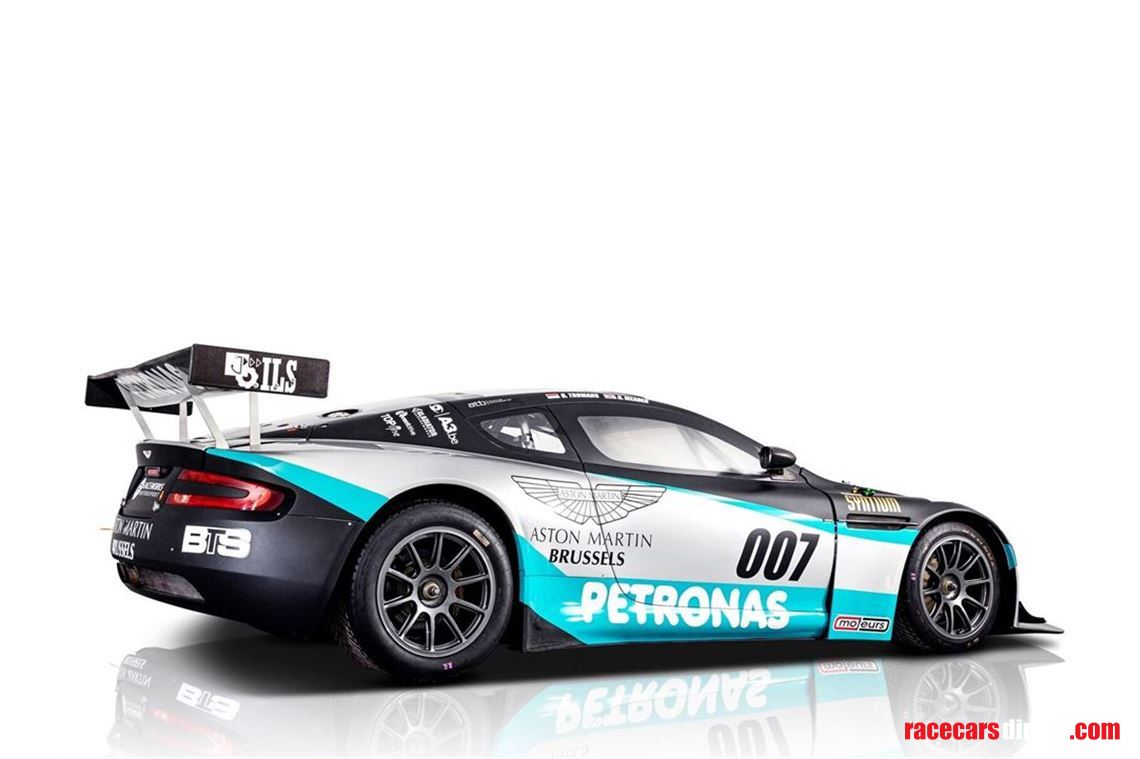 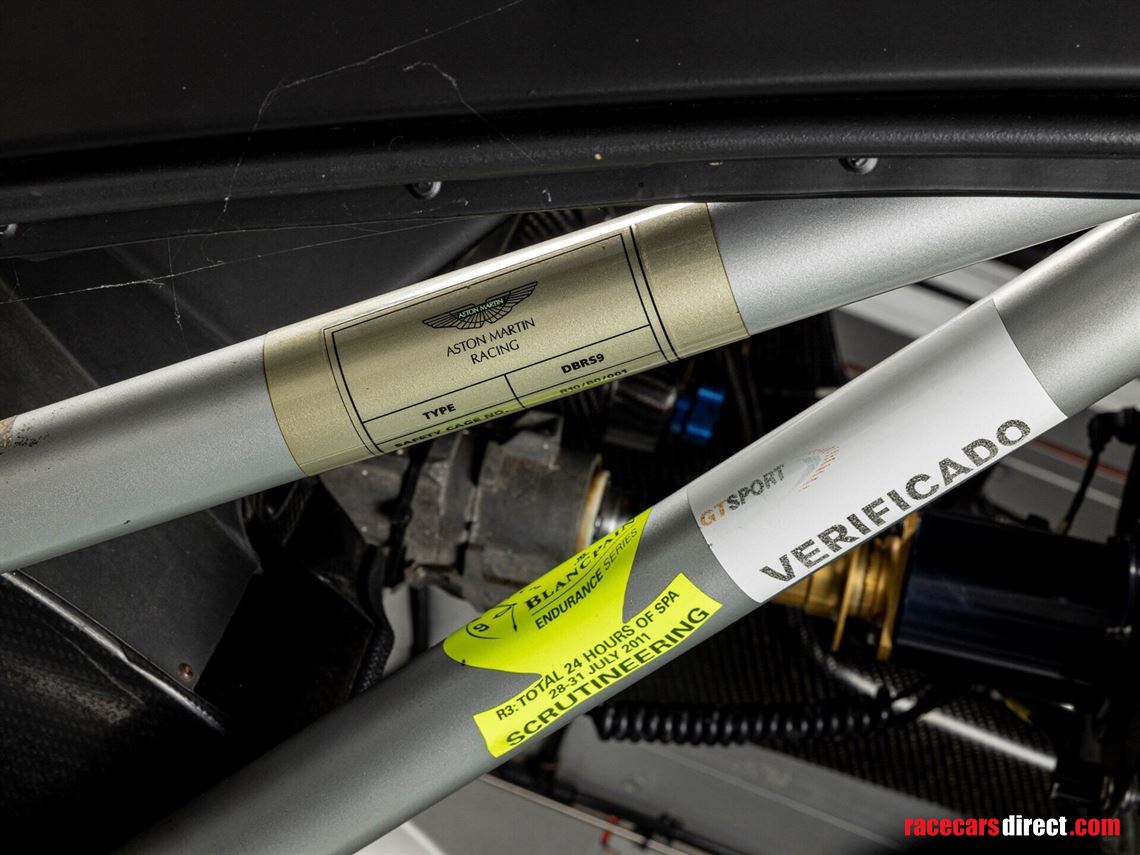 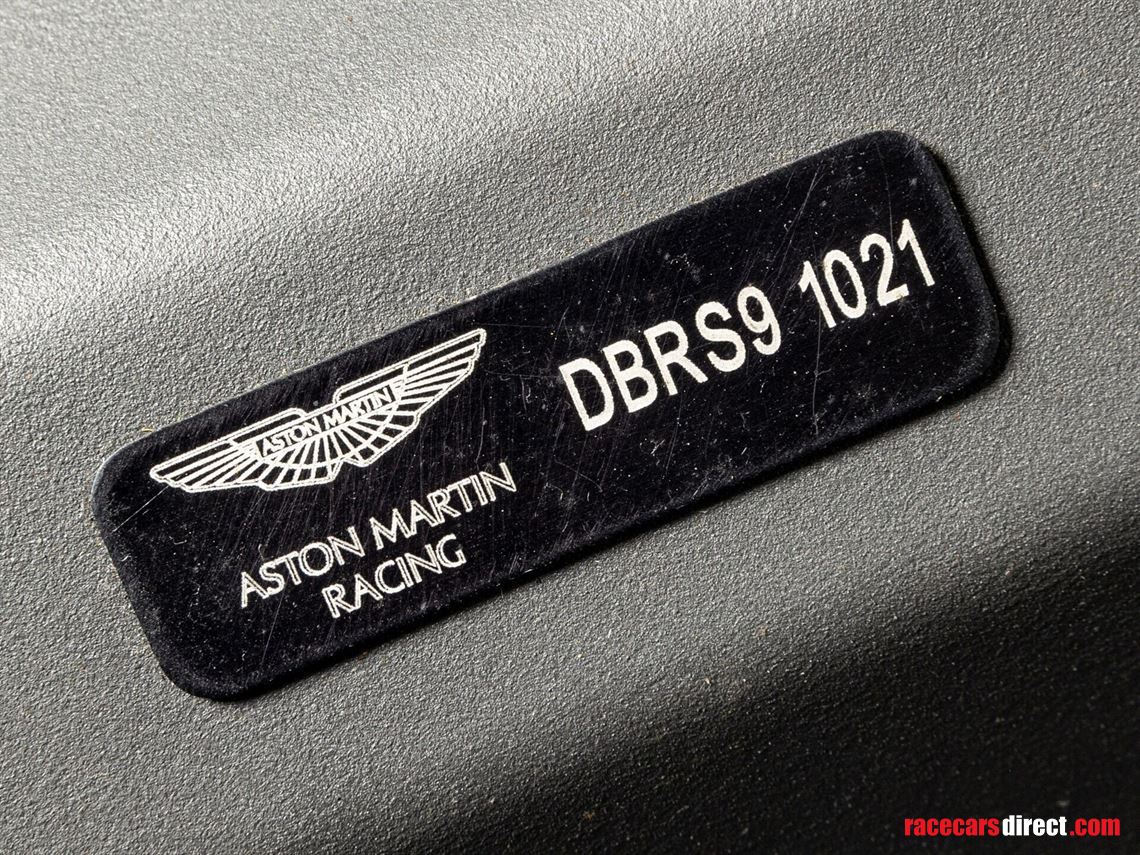 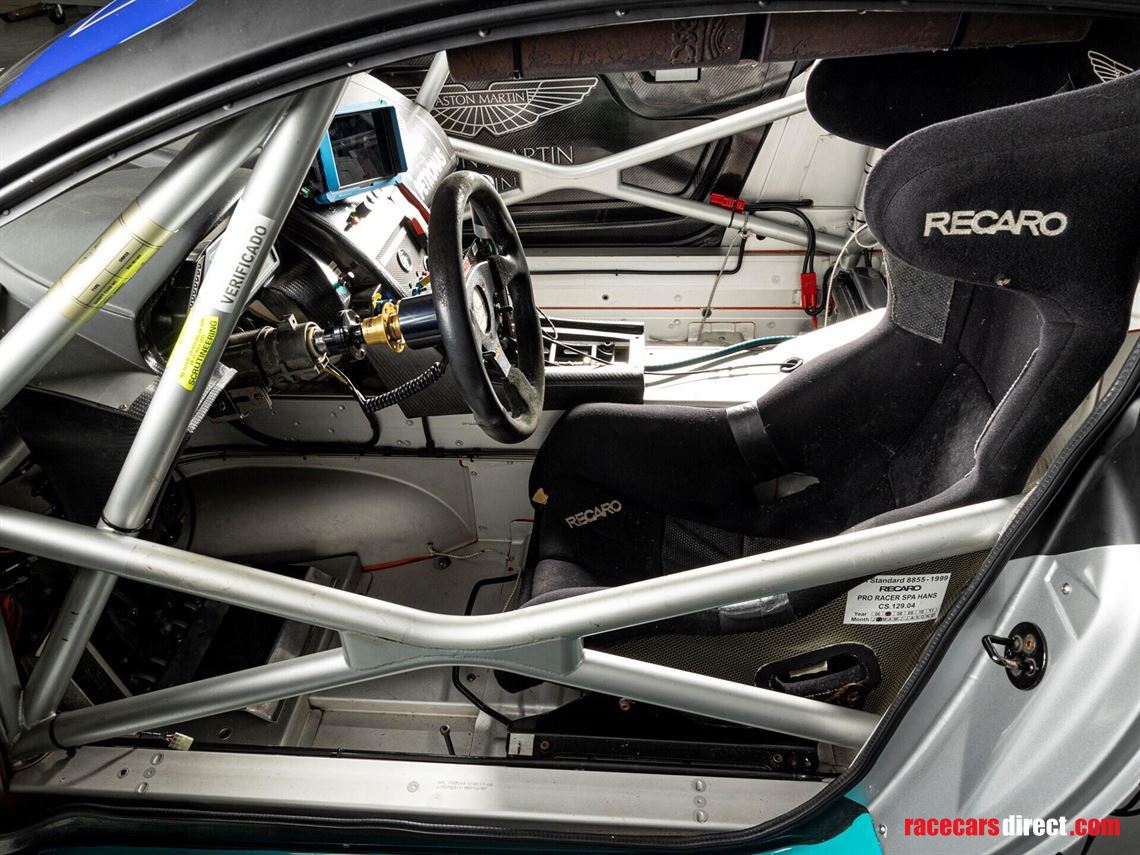 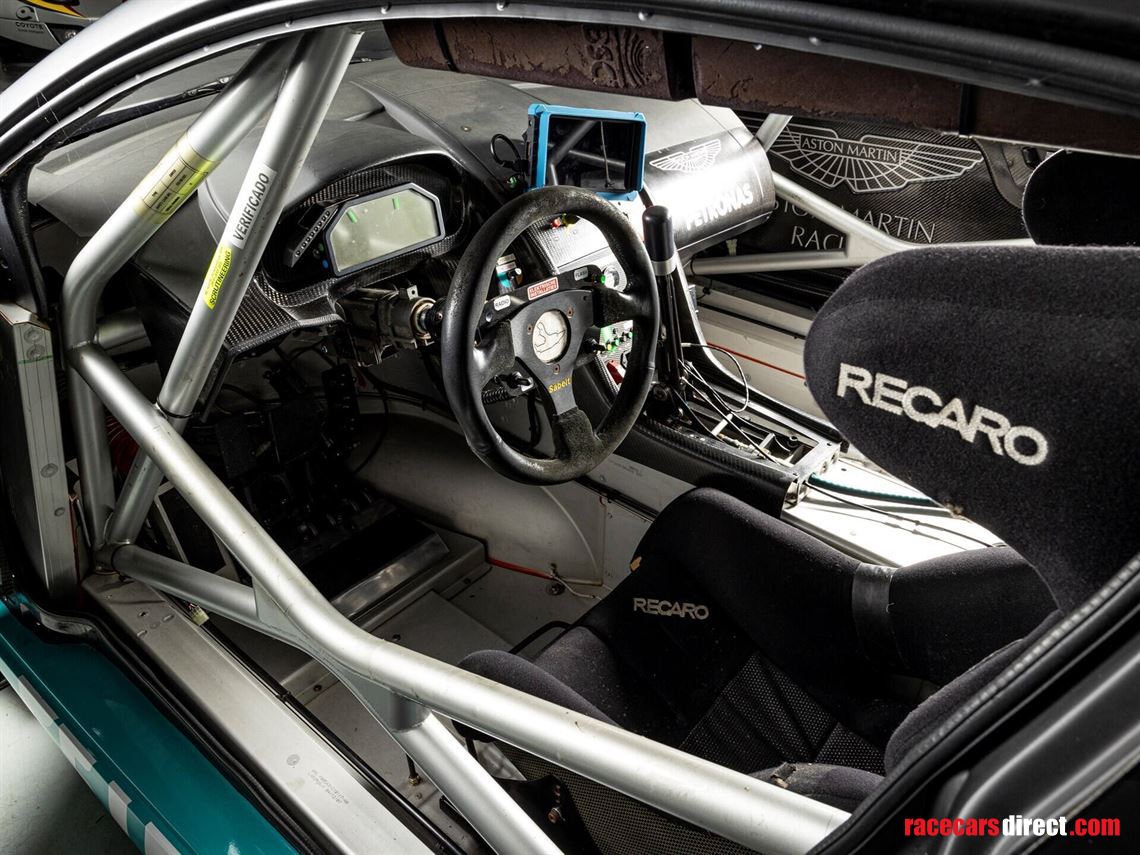 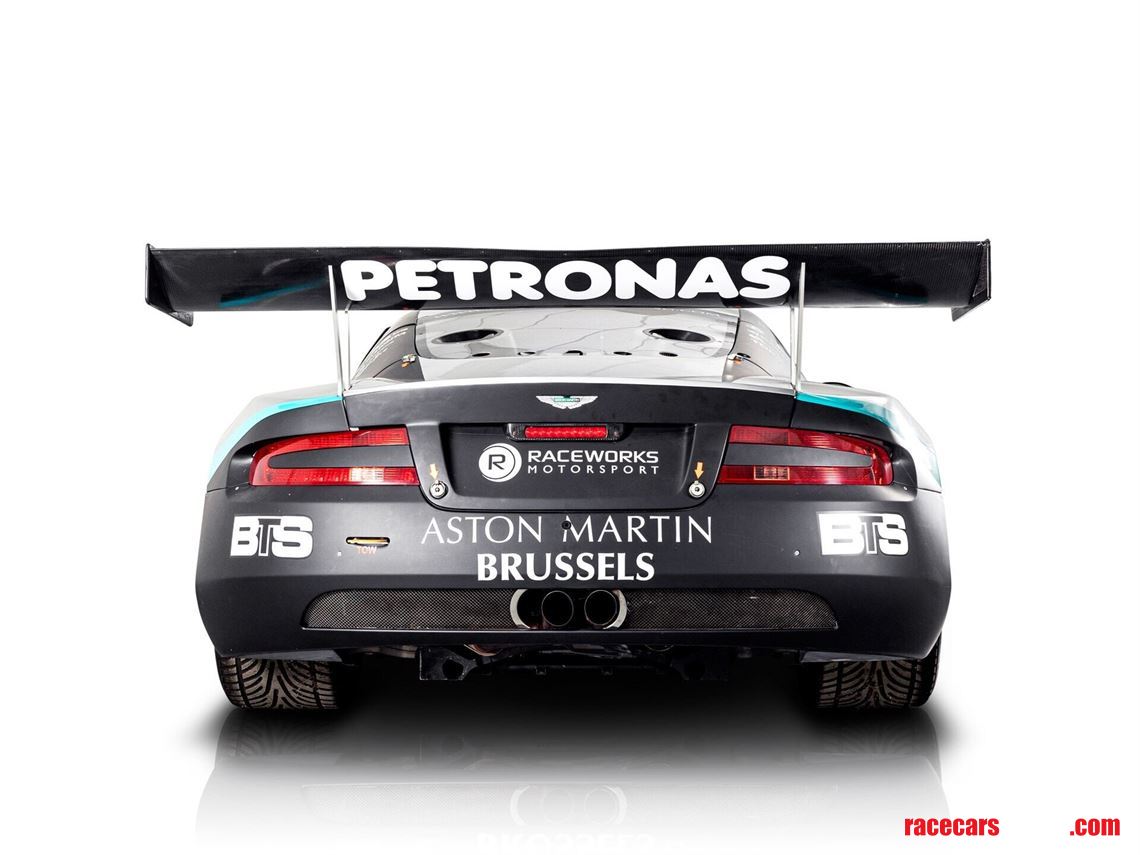 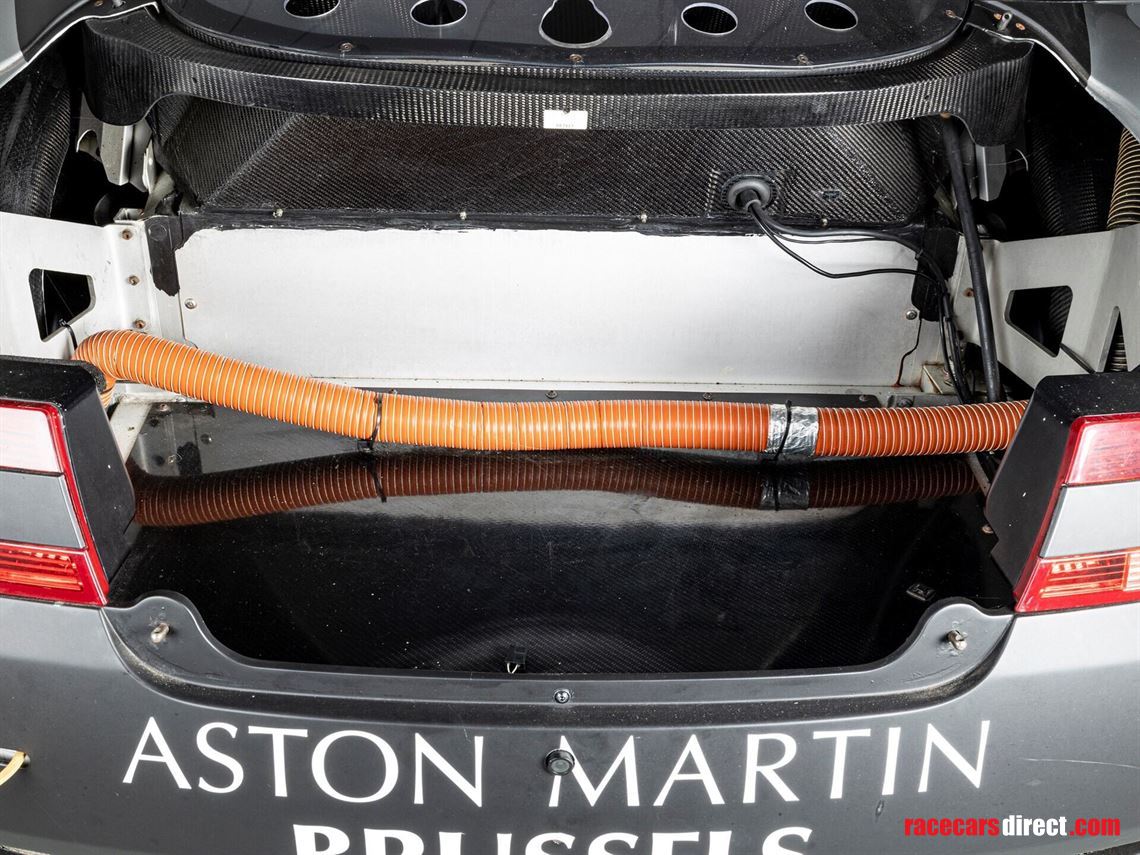 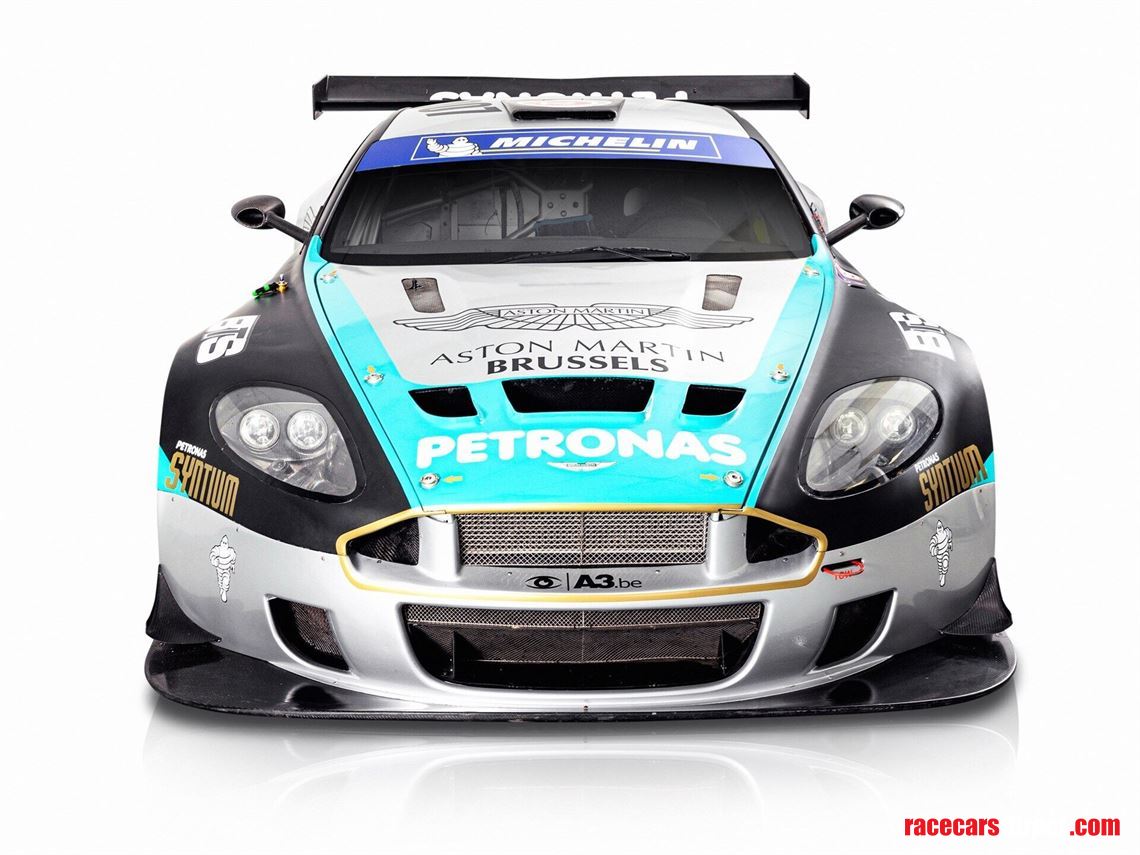 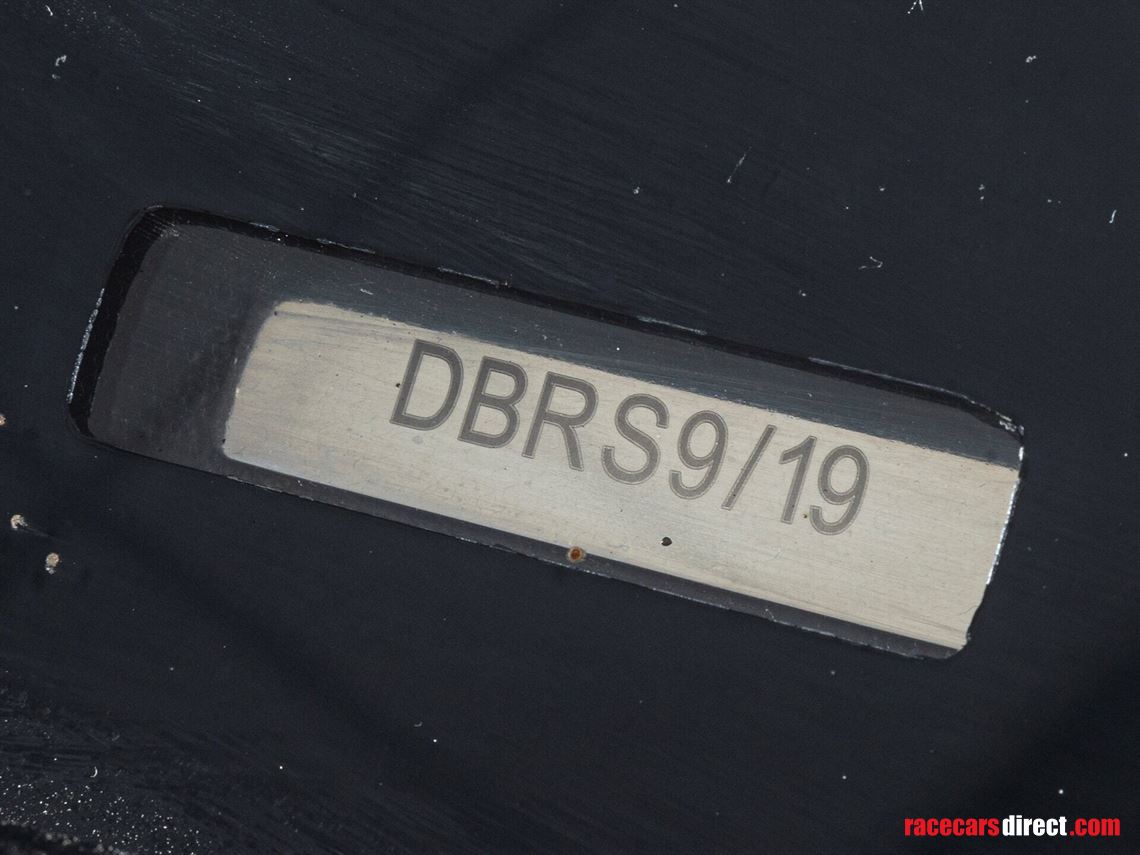 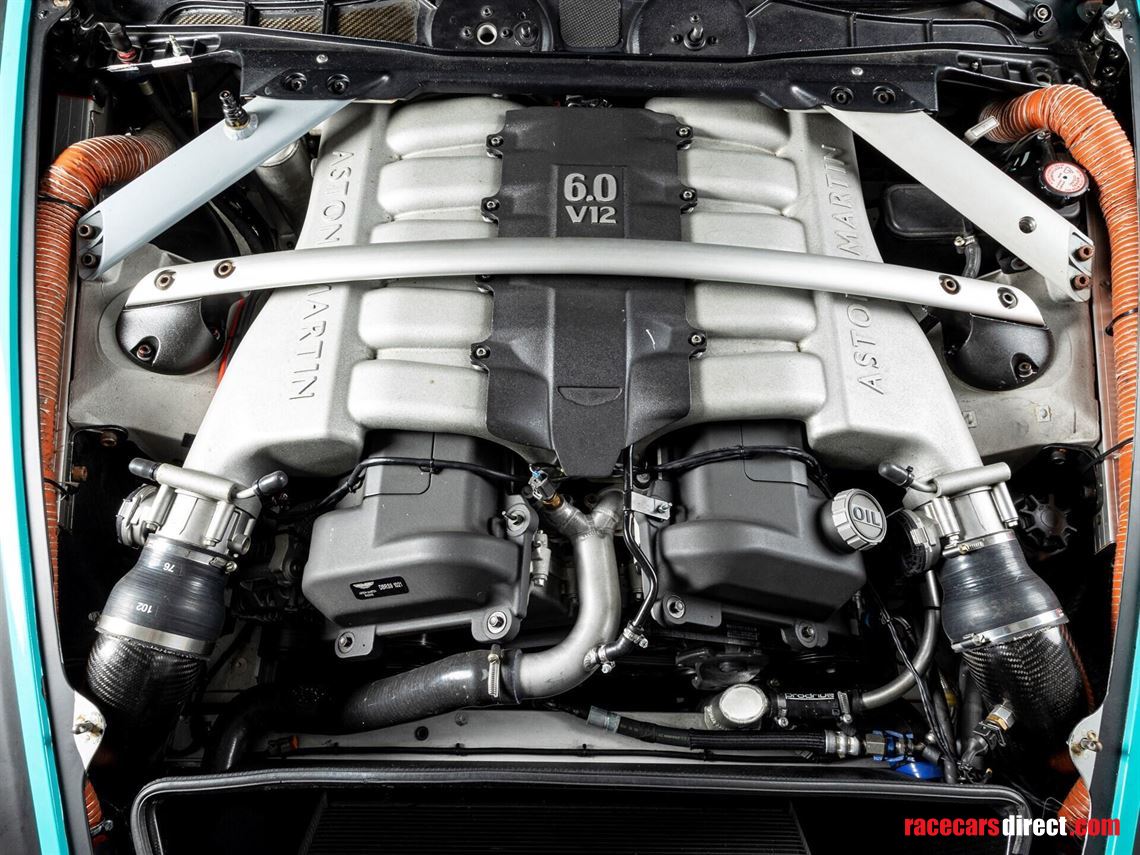 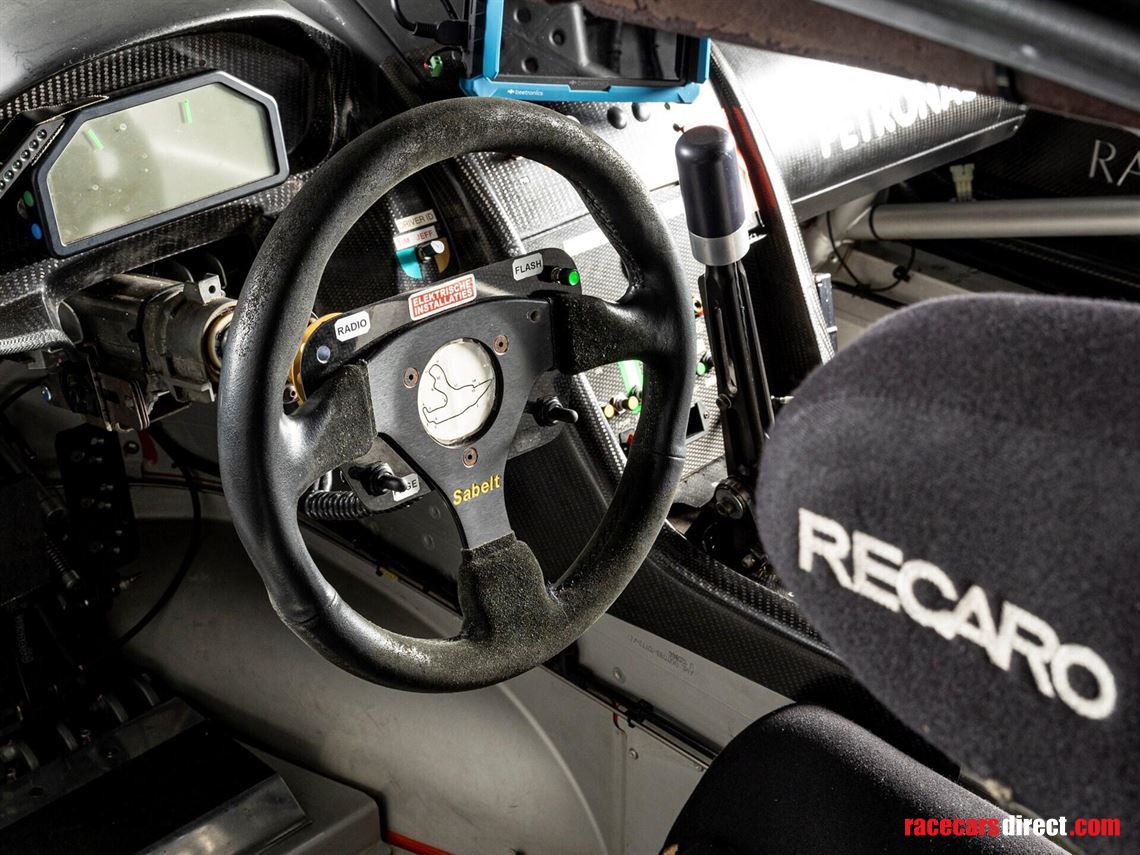 Please note that this vehicle is sold on a Bill of Sale.

After a hiatus of more than four decades, Aston Martin returned to frontline GT racing in 2005; the company's new DBR9 model represented its first factory-blessed, series-production competition GT car since the DB4GT. Success was immediate, with a magnificent GT class win on the car’s debut in the Sebring 12 Hours being followed immediately by overall victory in the RAC Tourist Trophy; the latter Aston’s first success in the famous race since 1959.

Although derived from the roadgoing DB9, the DBR9 was every inch the bespoke racing car, developed exclusively with the top level—and big budget—GT1 class in mind. However, the introduction of the more cost conscious GT3 class for 2006 inspired Aston Martin to develop a lower-tech variant, which offered a substantial portion of the DBR9’s formidable performance for barely one-third of the cost: enter the DBRS9.

As with the DBR9, construction of the DBRS9 was entrusted to Prodrive; the latter model featuring a marginally detuned version of the same 5.9-litre V-12 used in the former, with both sharing the same basic monocoque chassis. The DBRS9 boasted noticeably less sophisticated aerodynamics than its sibling, but was only slightly heavier, at just 1,280 kilograms; this figure remarkably being some 480 kilograms lighter than the standard DB9.

This example, chassis DBRS9/19, was one of just 26 DBRS9s constructed, and originally delivered to British GT team Cadena Motorsport ahead of the 2007 British GT Championship season. The car made its race debut at Brands Hatch in July, where it was driven by team owner, Paul Whight, and FIA GT competitor, Amanda Stretton. By the time that Thruxton had come around in August, the relationship had progressed such that Whight—now sharing with son Barrie—finished 6th in the weekend’s first race and an excellent 4th in the second. The season ended promisingly, with Barrie Whight and Lotus Test Driver Gavan Kershaw recording two further top-10 finishes at Rockingham in a highly competitive field that included the likes of seasoned GT professionals Allan Simonsen, Thomas Erdos and Jonny Cocker.

The 2008 season had Cadena intersperse their British GT commitments with selected rounds of the popular Britcar GT series. The season started with an excellent 2nd place overall in the Britcar 4 Hours at Snetterton—both Whights sharing the car with Kershaw on this occasion—while the British GT Championship rounds at Thruxton, Brands Hatch and Silverstone yielded respectable 6th-, 7th-, and 10th-place finishes, respectively.

For the remainder of the DBRS9’s contemporary racing career, its preparation would be entrusted to Aston Martin Racing customer team Barwell Motorsport, with the car entered under the Cadena-Barwell banner. The 2009 season encompassed just one event—the Zolder round of the Belgian-based Belcar series—although 2010 had a noticeably busier schedule, with Whight Sr. enlisting the services of former British Formula 3 frontrunner, Michael Bentwood, as his co-driver.

The new driving partnership immediately got off to a promising start with a 3rd place in the first round of the British Championship, at Oulton Park. Meanwhile, in May, the pair contested the Belcar 12 Hours at Spa-Francorchamps, in which they finished a creditable 13th overall; their deficit of just one lap to the winning Porsche emphasising the series’ competitiveness. Thereafter, a return to the British GT Championship yielded a 5th and a 10th place at Snetterton in August, and a 3rd at Brands Hatch just a month later. The season concluded with a one-off participation in the Spanish GT Championship at Jerez, in which Paul Whight and Tom Kimber-Smith took a fine 6th in the first race and 8th in the second.

The 2011 season proved to be DBRS9/19’s competitive swansong, with Cadena agreeing a deal to lease the car to the Belgian-domiciled—but still Barwell-prepared—Petronas squad. Driven by Belcar frontrunner Tim Verbegt and former Formula 3000 pacesetter, Jeffrey van Hooydonk, the pair contested five Belcar rounds; their best results being a 3rd, a 4th and a 5th—all at Zolder—and an 8th place in the Belcar 12 Hours at Spa. Interestingly, the car was entered for the blue riband Spa 24 Hours in July, but was unable to start due to tyre supply issues.

Despite having retired from professional competition at the conclusion of 2011, DBRS9/19 did compete in one final race—albeit one strictly amateur in status—when it contested the 2012 Aston Martin Festival at that year’s Le Mans 24 Hours. Driven in the 10-lap event by Paul Whight and Barwell team owner Mark Lemmer, the car finished a commendable 4th in class and 10th overall; this occasion marking the last time it turned a wheel in anger.

Acquired by the vendor in 2021, chassis DBRS9/19 has been used only very sparingly since, and has recently benefitted from a comprehensive overhaul by BBM Sport of Daventry, Northamptonshire. This included the replacement of the time-expired fuel tank and clutch, as well as a complete strip down and reassembly of all four suspension “corners” to permit the necessary crack testing to be performed. In addition, all brake calipers and master cylinders were completely rebuilt, while the engine was subjected to a leak-down test, and its fuel injection system overhauled.

This DBRS9 is accompanied by a spares package that is not limited to 12 wheels, selected bodywork panels, and many mechanical components. These include air ducts, brake bells and calipers, carbon fibre propshafts, damper brackets, a flywheel, fuel pump, and more; an inventory of spare parts can be viewed as part of this car’s digital history file.

Immaculately presented in its eye-catching 2011-specification Belcar colours, DBRS9/19 would undoubtedly represent a potential entry into the numerous historic series and standalone events—such as the Le Mans Classic and Classic 24 Hour at Daytona—for which it is eligible. Furthermore, with its factory-sanctioned, Prodrive-built credentials, it forms part of an illustrious yet highly select group of competition Aston Martins, and represents a car in which the ethos of its inspiration—the DB4GT—very much lives on.