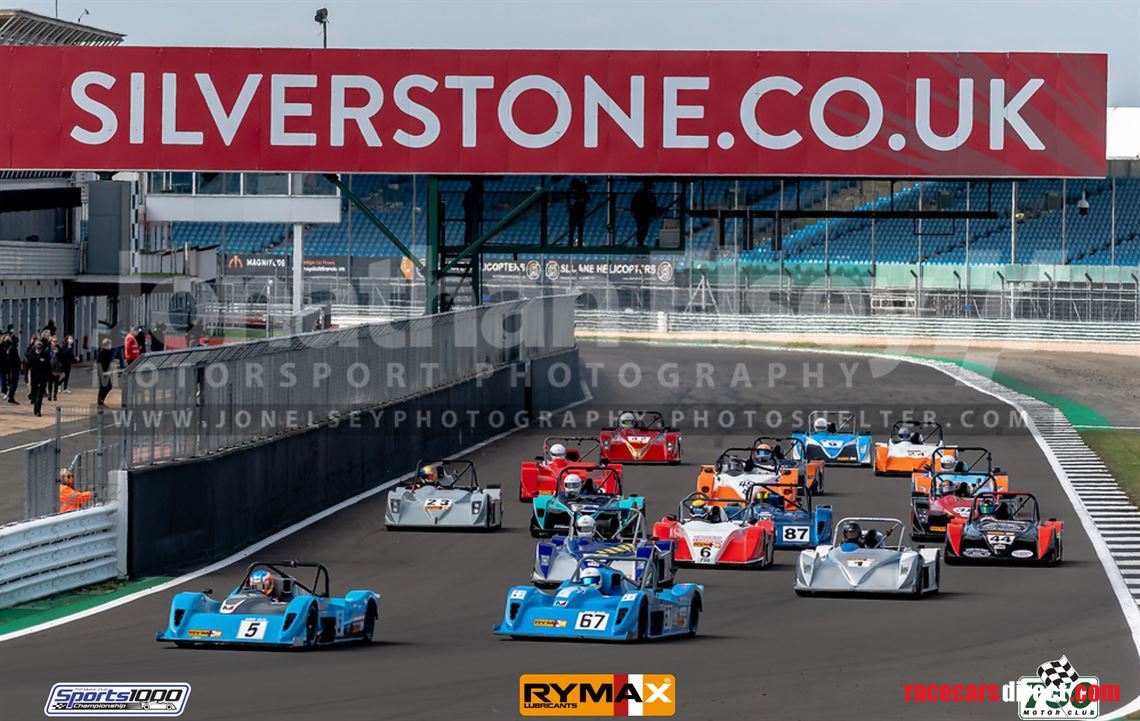 The start of the of the new Rymax Lubricants Sports 1000 season began at the home of British Motorsport, Silverstone. During testing before the event; lap record times were being turned by multiple drivers, threatening Tim Gray’s long standing record of 59.79 set all the way back in 2012.

Little did we know of how extremely exciting both races would be, with the biggest entry of Sports 1000 cars since the start of 2017.

The two Mittell’s of Victor Neumann and Michael Roots secured the top two positions separated by 0.05secs with the young Frenchman taking his first pole position in Sports 1000. The reigning Champion Ryan Yarrow secured third place on the grid just under 0.7secs behind. A standout performance from new challenger Matthew Minett placing fourth on the grid less than a second behind pole. Returning racer Daniel Larner continued his good testing form gaining fifth , just over 1 second away from Victor Neumann.

One to watch in the race would be Rich Miles after a scrutineering issue, meaning he would start at the back of the grid.

The first race of the Sports 1000 season had the makings of a Shakespeare play with elation and heartbreak at its core.

The fast-starting Mittell of Michael Roots passed his teammate Victor Neumann off the start quickly followed by Ryan Yarrow into Becketts corner. Equally swift off the line, Carl Austen made up four positions to sixth behind Colin Chapman and Daniel Larner. Rich Miles also made a lighting fast start up ten positions in the first two laps making his way up to seventh place.

On to Lap four, Victor Neumann made his way past Ryan Yarrow into second and began the chase towards Michael Roots. Yarrow would keep the two Mittell’s honest staying within touching distance to take advantage of any drama that may unfold.

It was hotting up further down the pack with the battle for 13th position between the quartet of Stephen Dean, Tony Gaunt, Sporting Cup Champion Jonathan McGill and Pit lane starter Phil Hutchins being just over a second apart for most of the race.

Rich Miles continued on from the first two laps as he battled with the seasoned competitor Colin Chapman for fifth. The 63 of Chapman in his new Spire GT3S held off Miles for five laps before Miles made his move in to Brooklands. Daniel Larner held a very respectable fourth position, but could not make headway into the top three in his first race back in his Mittell.

Back at the front, Victor Neumann caught race leader Michael Roots just as they began to lap the field. As they crossed the line on to the last lap, they were under 0.3secs apart. Roots successfully navigated the traffic with Neumann losing a small amount of ground on to the back straight. This gave Roots the advantage he needed and crossed the line to take what he thought would be his first ever win in Sports 1000.

The results changed when post-race scrutineering had been completed. Unfortunately seven cars had succumbed to Championship regulations which changed the scope completely.

This had a significant change on the grid for Race Two with many fast competitors starting from the rear.

The post-race shakeup meant a lot of drivers were out of position and the grid for Race Two is taken from your fastest lap from Race One. Ryan Yarrow would be on pole with Colin Spicer next to him on the front row. Further back on the grid; the competitors with lost results from the first race, all had a point to prove. You surely can’t get on the podium from back there...

As the lights went out on the Silverstone gantry, Colin Spicer launched into the lead ahead of Champion Yarrow. They were closely followed by an extremely fast start by Sporting Cup Race One winner James Walker, who troubled the top two for the first five laps before a rotation at Brooklands.

Michael Roots moved up to Seventh from 14th on the first lap closely followed by Rich Miles and Victor Neumann in the subsequent circuits. As they fought their way through the field Neumann was able to pass Miles putting cars between them.

After nearly half the race a quintet were fighting over 11th position; Tim Hoverd, Jonathan McGill, Stephen Dean, Tony gaunt and Tom Johnston. These racers would swap positions until the end of the race. Johnston would come out on top of this exchange followed by Dean, the Sabre of Hoverd, the Wolfe of Gaunt and Sporting Cup Champion McGill. A little further behind; the newcomers/returning drivers of Matthew Minett, Ian Hutchinson, Andrew Timpson and Matt Thomas were all setting respectable lap times still getting used to their high-speed machines.

Back at the front, with seven laps to go Roots caught Yarrow. Consequently, Neumann closed up the gap with 0.8secs covering the three of them. Rich Miles in fourth was able to break away from Colin Chapman in fifth but couldn’t make headway in to the top three.

The top three remained static for the rest of the race until Roots slipstreamed his way along the wellington straight and passed Yarrow in the penultimate corner of the race. Michael Roots went on to win the last race of the day, Ryan Yarrow in second and Victor Neumann in third.

We look forward to another bumper grid at Croft in North Yorkshire May 29/30.

This is the later wider chassis car, Fully registered and road Legal, £50K of optional spec.