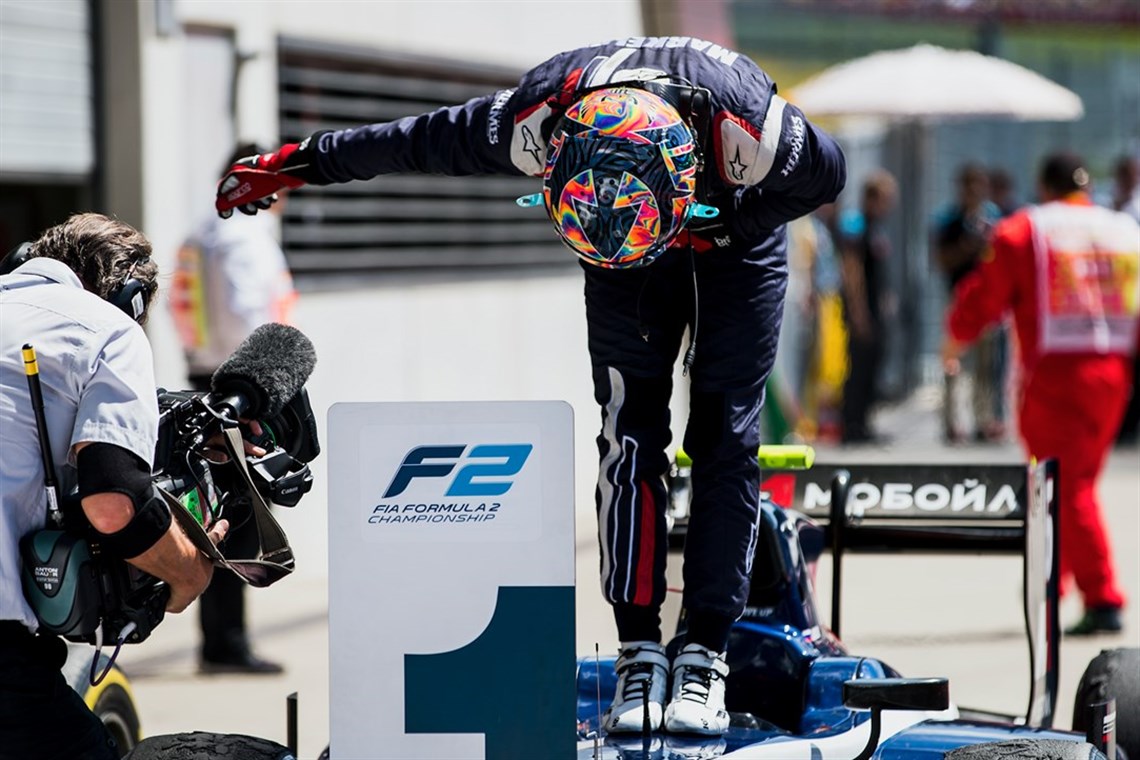 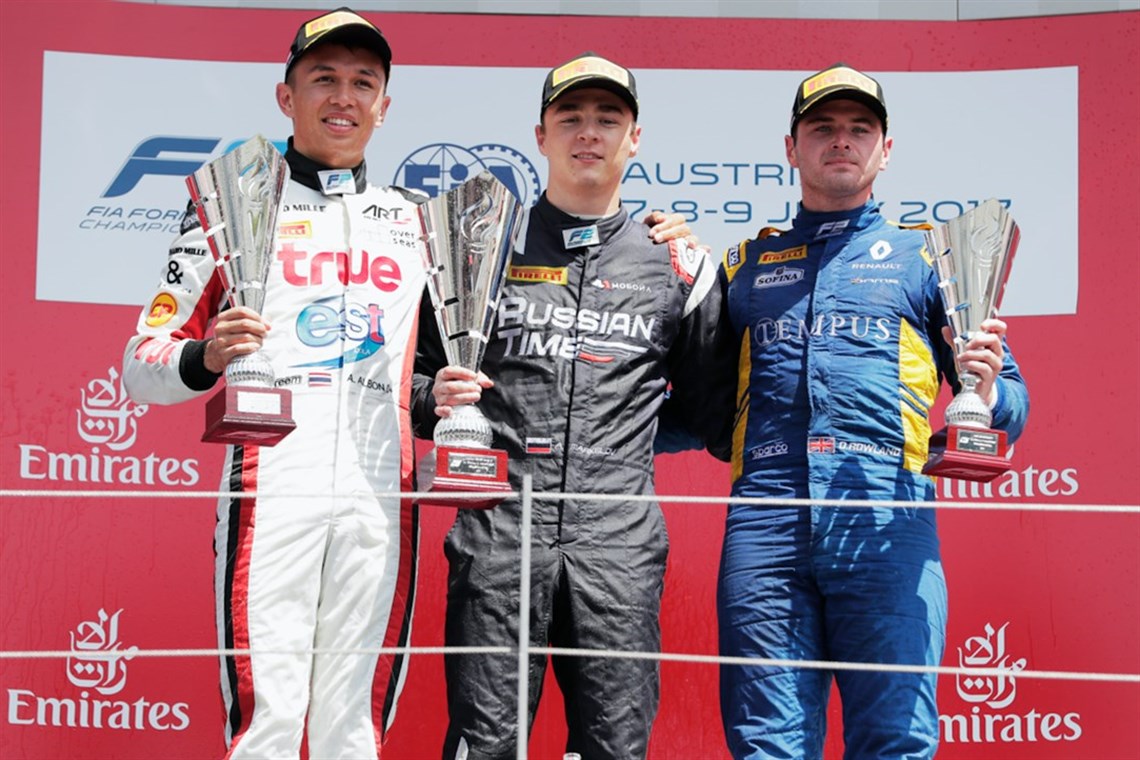 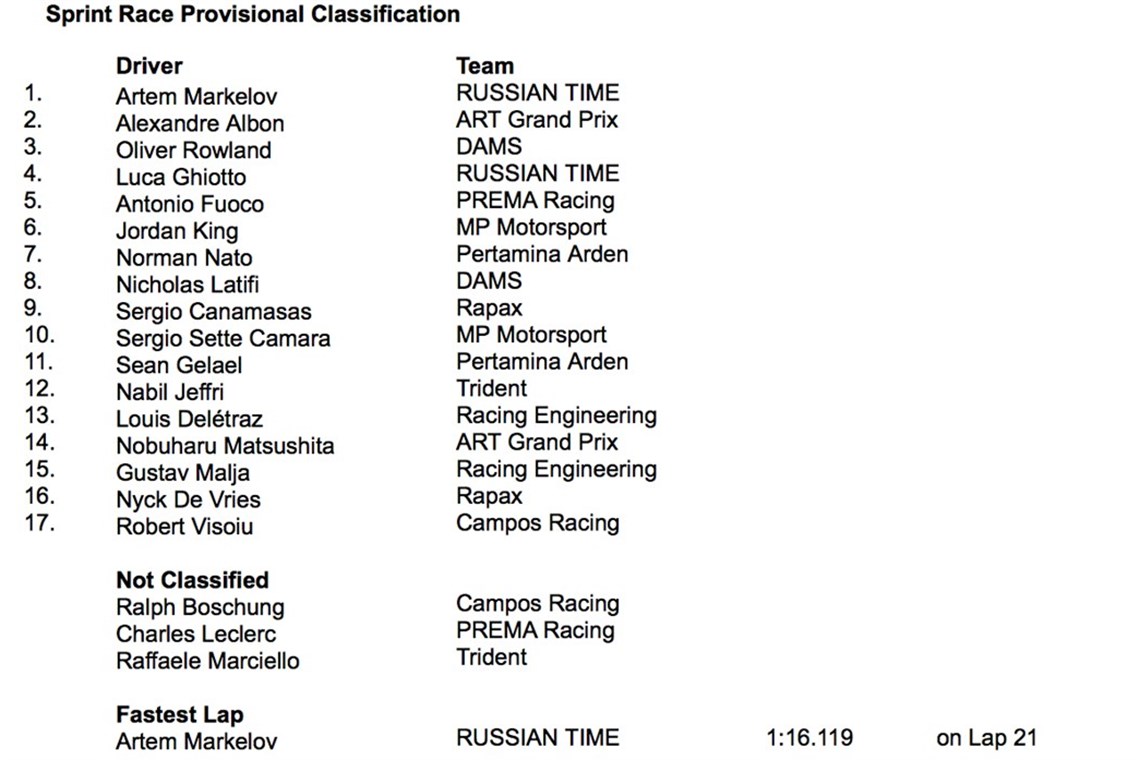 Artem Markelov dominated this morning’s FIA Formula 2 Sprint Race at the Red Bull Ring in Spielberg, Austria for a fine win which saw the likeable Russian close up on championship rival Charles Leclerc, who retired midway through the race, as he was greeted by the chequered flag ahead of Alexander Albon and Charles Leclerc.

The win was set up at the start, which saw a long hold before the lights went out to release the Russian, who easily controlled a fast charging Albon with Rowland in his wake: the start was too long for Ralph Boschung, who stuttered as he tried to go and was swamped by the grid before Raffaele Marciello drove into the back of the slower car, forcing the Italian into retirement and the safety car to emerge on track.

The race was live again on lap 5 with Markelov easily controlling the restart: further back Leclerc was looking to move forward and dispatched Jordan King for P5 and a ringside seat for the battle ahead of him. Rowland was looking for a way past Albon, who was not in the mood to hand out presents: the DAMS man stuttered and Antonio Fuoco went to the outside of him at turn 4 but was squeezed onto the kerbs before stumbling back into teammate Leclerc, who had nowhere to go and spun into retirement after contact between the pair, prompting a VSC period.

The marshals did their customary quick job of removing the car and the race was live again 2 laps later, with a number of drivers very close together as the track went green: Nyck De Vries ran inside and through a fight between Luca Ghiotto and Gustav Malja, who came together with the Swede sailing into the gravel and the Italian resuming the fight and moving back past the Dutchman.

With his teammate controlling the race from the front, Ghiotto was on a charge to recoup something from a disappointing weekend: on lap 11 he dispatched Robert Visoiu for P7 before slicing past Nicholas Latifi a few laps later by running outside and switching back at turns 5/6, blasted past King on lap 19 before closing on Fuoco, easily claiming the inside line at turn 4 for P4 a lap before Visoiu and De Vries tripped over each other at the same place, with both running through the gravel and losing a probable points finish.

But at the flag it was Markelov who collected all the plaudits for a fine win ahead of Albon and Rowland, with Ghiotto in P4 after an astonishing drive to finish just ahead of a disappointed Fuoco. King was promoted to 6th following a 5 second time penalty for Latifi for speeding in the pitlane, with the Canadian finishing his run of podiums in P8 behind Norman Nato, who celebrated his birthday with more points for 7th.

As disappointed as he was with the retirement, Leclerc could at least be consoled with an extended lead in the Drivers’ Championship, moving up to 151 points ahead of Rowland on 102, Markelov on 99, Latifi on 72 and Ghiotto on 66 points, while in the Teams’ Championship PREMA Racing and DAMS share a seat at the top of the table on 174 points each ahead of RUSSIAN TIME on 165 and ART Grand Prix on 130 as they look towards next week’s Round 6 of the 2017 Championship in Silverstone.