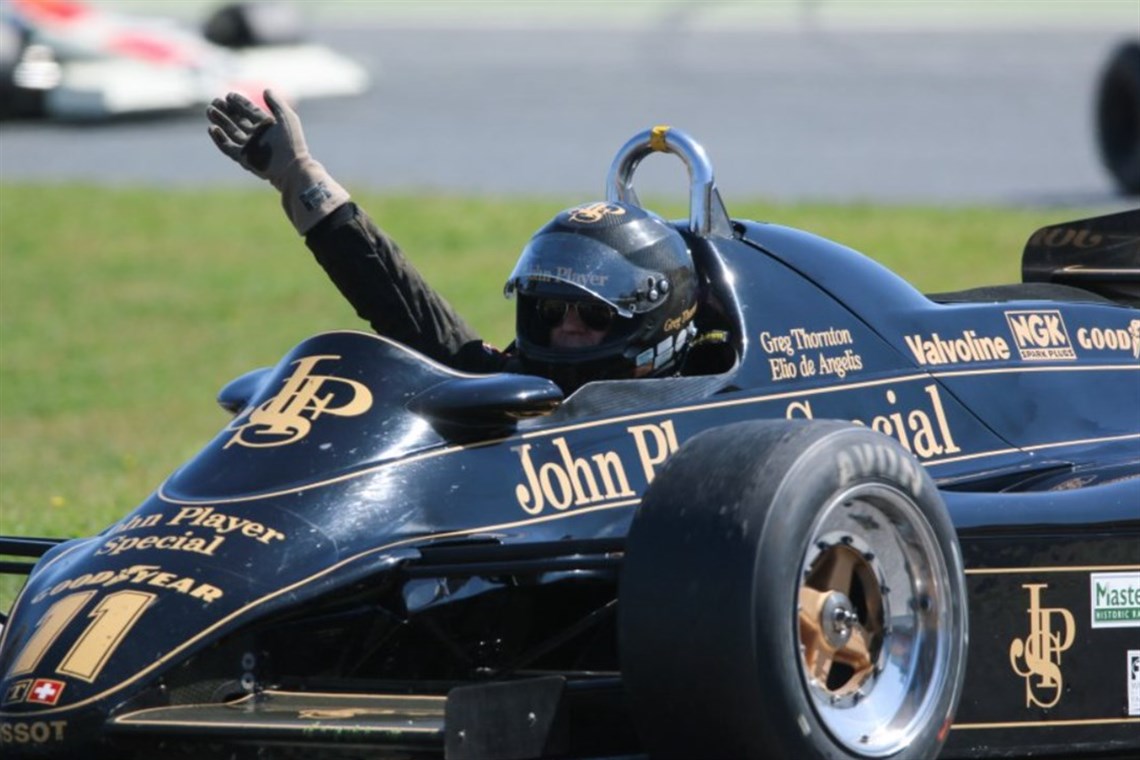 Lotus 91 driver Greg Thornton won the opening race of the FIA Masters Historic Formula One season by beating Loïc Deman’s Tyrrell 010 and Steve Hartley’s Arrows A4. Thornton had inherited the lead when pole man Michael Lyons had to retire his Williams FW07C on lap 6 but two laps later lost it to Deman. When the Belgian was baulked by a backmarker, Thornton was handed back a lead that he kept until the end. Hartley ended up a distant third, 20 seconds adrift.

“LOÏC GOT ME AT THE END OF THE STRAIGHT. AFTER THAT, I SAT BACK HOPING THAT SOMETHING MIGHT HAPPEN – AND IT DID!”, SAID A JUBILANT THORNTON.

“I was trying to lap James Hagan’s Lec who was in the middle of the track and I spun…”, Deman explained.

In the pre-78 class, another pre-race favourite failed to make the finish when Nick Padmore’s Fittipaldi F5A suddenly slowed and coasted back into the pits with gearbox problems. That gave the lead to Max Smith-Hilliard, whose Shadow DN5 was embroiled in a close fight with Jason Wright’s Shadow DN8 that lasted until the line. The pair were split by a mere second all race. Patrick D’Aubréby took third in his March 761 after Jamie Constable’s Lola T370 lost speed in the latter half of the race.

“A GOOD START OF THE YEAR”, SAID A HAPPY SMITH-HILLIARD, “BUT JASON KEPT ME HONEST RIGHT UNTIL THE END. I COULDN’T QUITE PULL AWAY, SO I HAD TO MAKE SURE NOT TO MAKE ANY MISTAKES.”

“I’m simply not fit enough”, said Wright, the American being honest as ever. “I’ve had too many business responsibilities in the past few months, so I just got tired at the end. But the car felt good, I really enjoyed myself.”

At the start, Michael Lyons got away from pole cleanly to lead Thornton and Deman into the first corner. On lap 2, he produced the fastest lap of the race to open up a three-second gap that he set about maintaining thereafter.

Meanwhile, Steve Hartley had done an amazing job to climb up to fourth, having dropped down to seventh at the start. He was followed by a six-car train led by Andy Wolfe (Tyrrell 011) who had got past Christophe d’Ansembourg (Williams FW07C) and Simon Fish (Ensign N180). They were followed by Joaquin Folch (Brabham BT49), pre-78 class leader Nick Padmore and Mike Wrigley (Williams FW07C). A gap then opened up to Smith-Hilliard and Wright, both just shy of the top-ten, with Ian Simmonds’ Tyrrell 012 as the sole Lauda class competitor following the pair for the entirity of the race.

On lap 5, as Deman closed in on Thornton, the leader was beginning to slow, Lyons’ progress halted by a broken throttle linkage that made him crawl back to the pits at an ever-slower pace.

The next lap around, Thornton was the new leader but Deman was setting him up for a pass, which duly occurred at the start of lap 8. At the same time, though, another leader was slowing, Nick Padmore’s pre-78 class-leading Fittipaldi returning to the pits with terminal gearbox issues, handing the class lead to team mate Smith-Hilliard.

Deman then kept a lead over Thornton of around a second until on lap 12 when, coming up to lap James Hagan’s Lec CRP1, the Belgian was forced onto the grass and spun, thereby handing a gift to Thornton that the Lotus driver was happy to accept. With four seconds in hand on Deman, Thornton ran out the race to become the first FIA Masters Historic Formula One winner of 2017.

Steve Hartley had a lonely race to third, finishing 20 seconds down on Thornton, while Andy Wolfe kept Simon Fish at bay to take fourth. Sixth was Folch, ahead of d’Ansembourg, whose Williams lost pace in the closing laps, and Wrigley. Top pre-78 runners Smith-Hilliard and Wright rounded out the top-ten, ahead of Simmonds, ‘Mr John of B’ (Ligier JS11/15) and D’Aubréby, who grabbed third in the pre-78 class after Jamie Constable’s Lola T370 dropped back with three laps to go.

Built for the 1983 F1 Season by RAM racing and raced by Kenny Acheson and Jaques Villeneuve Snr.

A one-off toolroom copy of the rare GT40 roadster. Ready to race and in brand new condition.

PADDOCK DISTRIBUTION is specialized in the selling of race trailers.

Motorsport98 is selling his Ligier JSP320