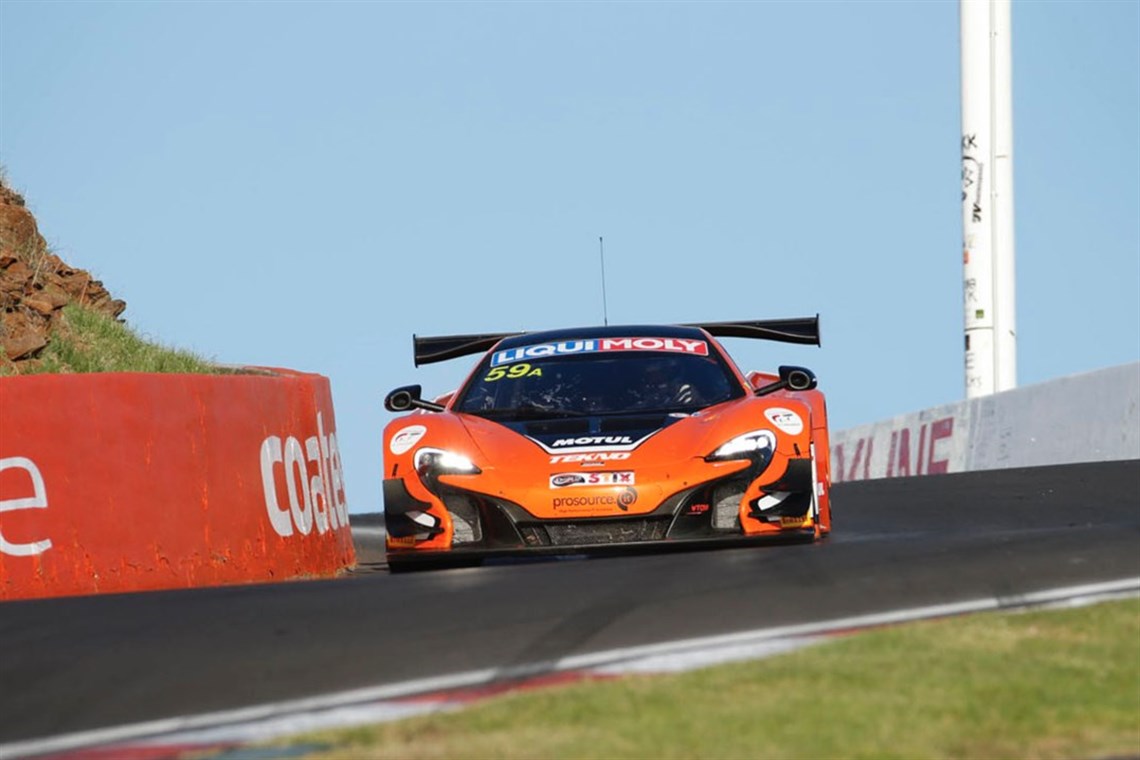 Shane Van Gisbergen, Alvaro Parente and Jonathon Webb drove their #59 Tekno Autosports McLaren to victory in an action-packed Liqui-Moly Bathurst 12 Hour, the opening round in the new Intercontinental GT Challenge. The McLaren drivers held on to a mere 1.2 second lead over the 2015-winning Nismo Nissan GT-R.

Eight different leaders from five different manufacturers, a record 29 lead changes, a new outright lap record for Shane Van Gisbergen (2'01.567) and a new distance record with 297 laps: the spectacular and closely-fought 2016 edition of the Liqui-Moly Bathurst 12 Hour, the first round of the inaugural season of the Intercontinental GT Challenge, was definitely one for the history books. But after twelve hours of non-stop on-track action, it was Tekno Autosports, and their McLaren 650S who triumphed, after their pit-stop strategy put them in the lead when it counted most.

As polesitter Shane Van Gisbergen led the 36-car strong field away at 5.45 am on Sunday morning, the New Zealand driver immediately made his mark on the race, claiming the outright lap record on the Mount Panorama Circuit. The orange machine stayed in contention for the lead all through the race, although there were some hectic moments. In the early hours, Alvaro Parente came to a halt on the pit straight with electrical problems, but a reset got the #59 McLaren going again, having lost some 45 seconds. The Portuguese driver and Jonathon Webb, from Australia, then drove the middle stints of the race, climbing back up the order.

When Shane Van Gisbergen got back behind the wheel for the final hours of the race, he immediately lost ground due to a drive through penalty for speeding in the pitlane. The last of 13 safety car-interventions, some 90 minutes before the end of the race, and a perfectly executed pitstop strategy allowed Gizzy to close on the leaders again and when the #1 Nismo Nissan made its final pitstop 50 minutes before the end, Van Gisbergen was back on top.

An inspired drive by reigning Blancpain Endurance champion Katsumasa Chiyo saw the Nissan claw back in the final laps, reducing the gap from over 13 seconds to less than 1,5, but Van Gisbergen kept his bearded head cool and took the victory, claiming the first major endurance win for McLaren in over twenty years.

Behind the McLaren-Nissan duo, #10 Team M-Sport Bentley driver Steven Kane held off Laurens Vanthoor in the #2 Phoenix Audi to claim the final podium position. Both manufacturers went through some tough times on the mountain. The two MPC Audi cars, that managed to qualify on the front two rows of the grid, were both hit by a spectacular punctures in the opening hours. On the #74 R8, the flailing rubber caused terminal suspension and oil cooler damage, while the #75 eventually finished in eighth. The #2 Phoenix Audi had lost a lap early on as well, but determined stints by Vanthoor and Winkelhock saw the car back on the lead lap at the beginning of the second half of the race, even claiming first position just before the 200-lap mark. The gamble not to change tyres for the final stint did not bear fruit however, and the Phoenix crew had to settle for fourth.

In the Bentley camp it was the #31 Continental that gave the team the most work. The car had made contact with the #60 McLaren early on - the Tekno Autosports machine never got back into contention - but it managed to get back to the top of the leader board, with both Bentleys lying in first and second positions for a while. However, a second contact proved to be too much for the #31 Continental, and the car eventually finished in seventh, four laps down.

The Mercedes of Erebus Motorsport and Mishumotors might have been the oldest GT3 machines among the Intercontinental GT Challenge cars, but they were more than a match for the other contenders. Even though the #33 and #63 SLS did not cross the finish line after making contact with the hard walls surrounding the Mount Panorama circuit, the #36 Erebus Motorsport Mercedes was at the sharp end for most of the race, leading the pack on four different occasions. In the final hours the Erebus drivers lost position on the lead lap and could not recover from that, finishing in fifth.

In the Intercontinental GT Challenge AM driver classification, the top points looked set to land in Tony Quinn's pocket, with the #37 Keltic Racing McLaren enjoying a five-lap lead halfway through the race and even running in fifth overall. Soon after, an incident with the #32 Lago Racing Lamborghini - both cars swerving to avoid debris on track - left the McLaren beached on a curb in Griffins Bend and any chance of victory was gone.

A great comeback after the early tyre problems gave the AM win to Steve McLaughlin, who shared the #75 MPC Audi with René Rast and Garth Tander. Roger Lago (#32 Lago Racing Lamborghini) and Rick Armstrong (#82 International Motorsports Audi) were second and third among the Intercontinental GT Challenge AM drivers, after a race in which both had to recover from a number of setbacks.

NOW IN THE USA!