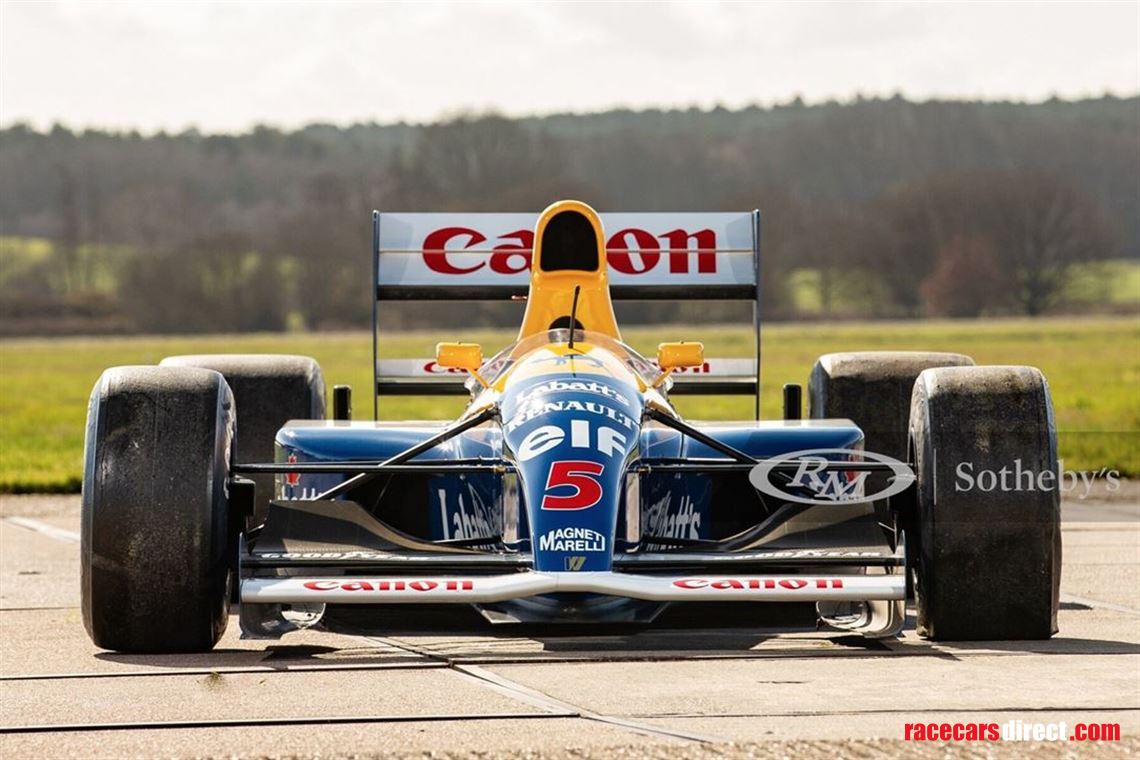 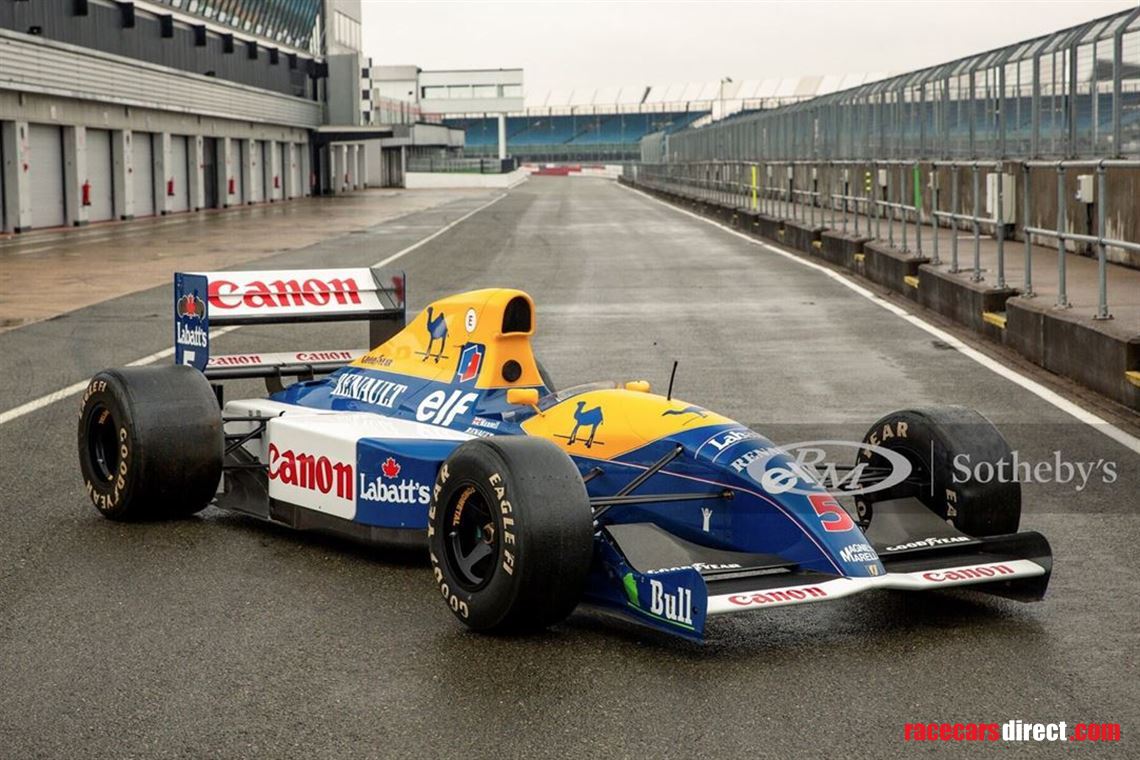 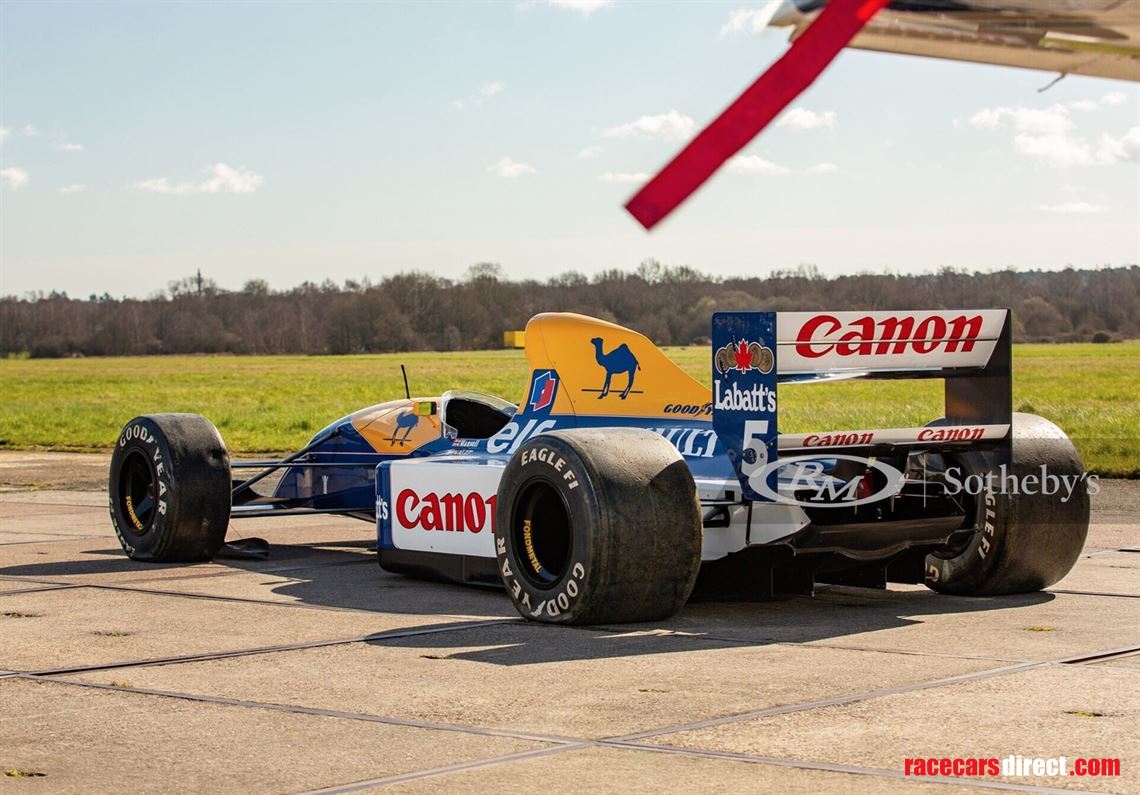 1991 British Grand Prix winner Nigel Mansell in Williams FW14-5 gives Ayrton Senna a lift back to the pits after the latter ran out of fuel on the final lap. Courtesy of Motorsport Images 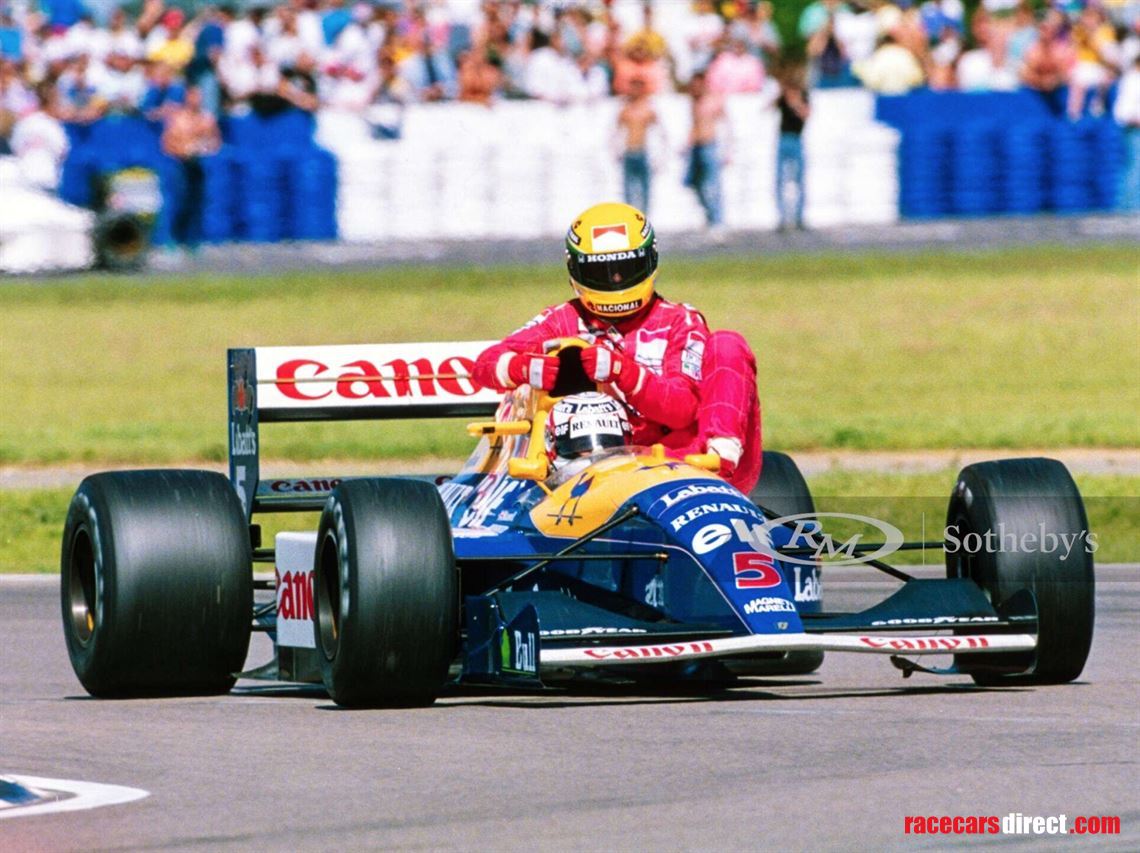 Nigel Mansell in his Williams FW14 battles wheel to wheel with Ayrton Senna in his McLaren MP4/6 to lead the 1991 Spanish Grand Prix. Courtesy of the Girardo & Co. Archive 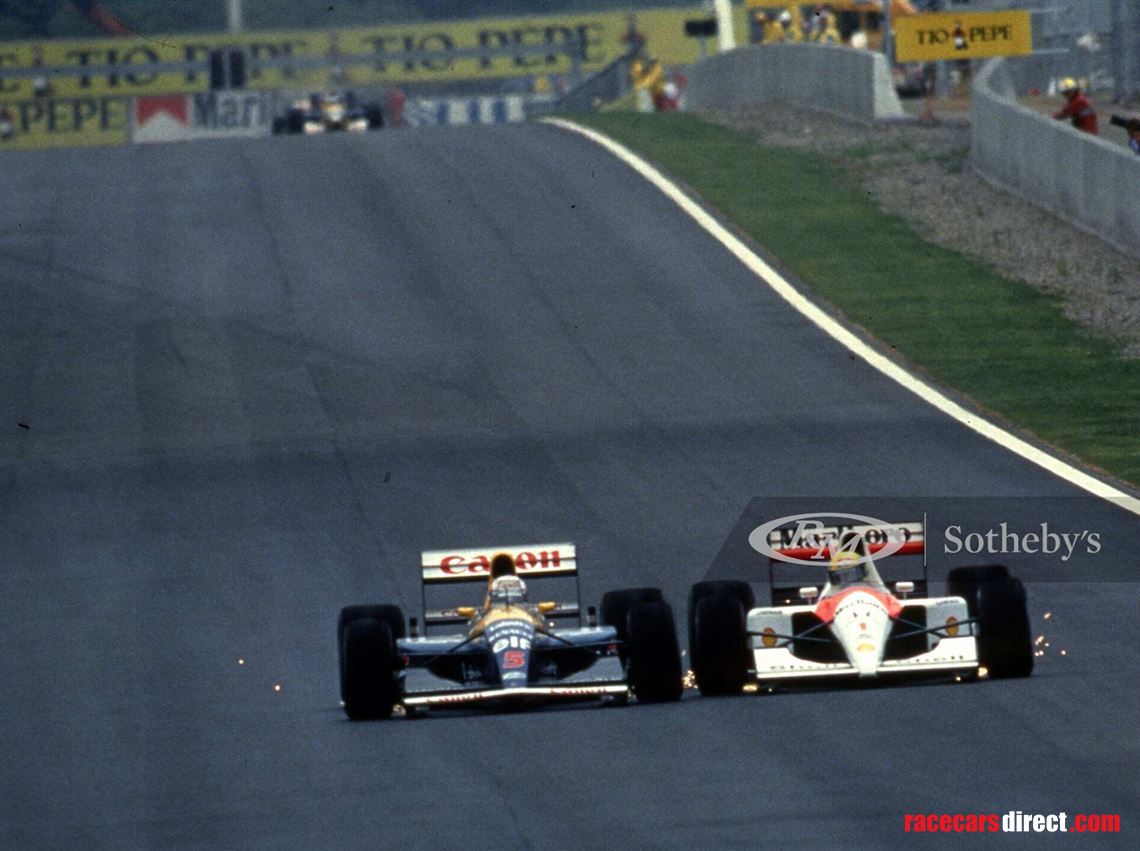 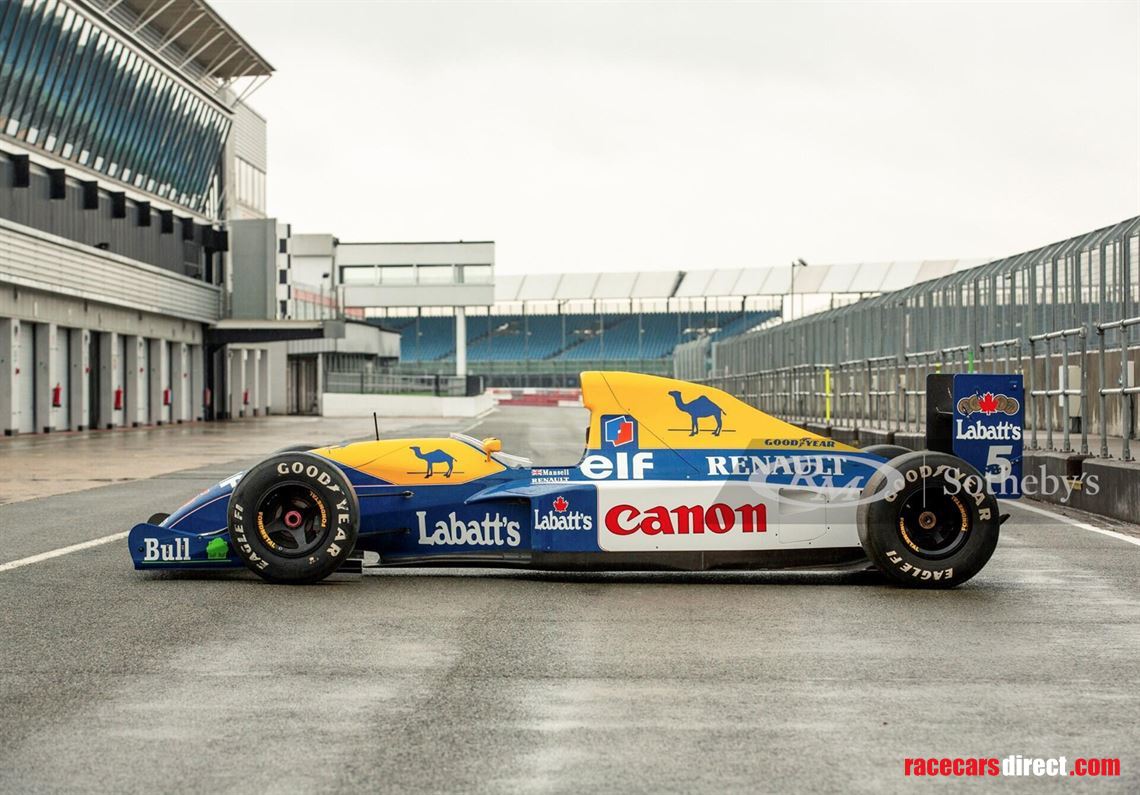 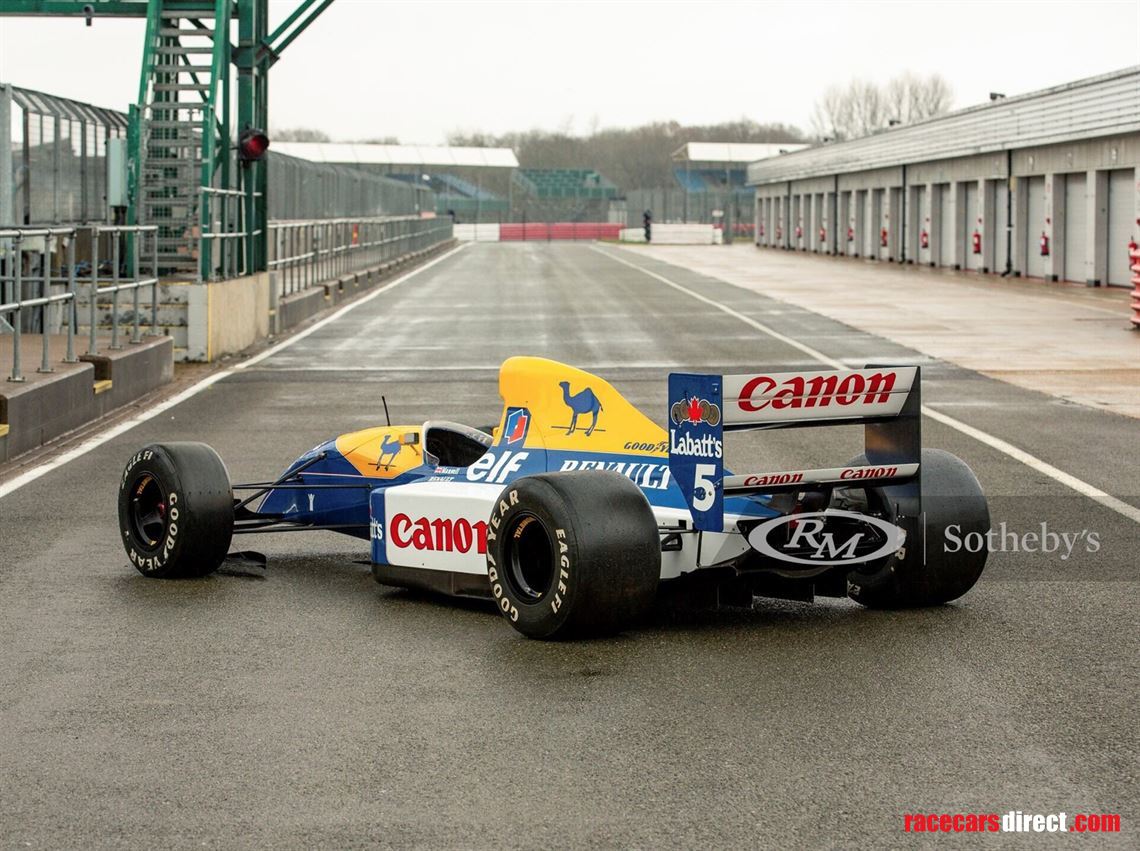 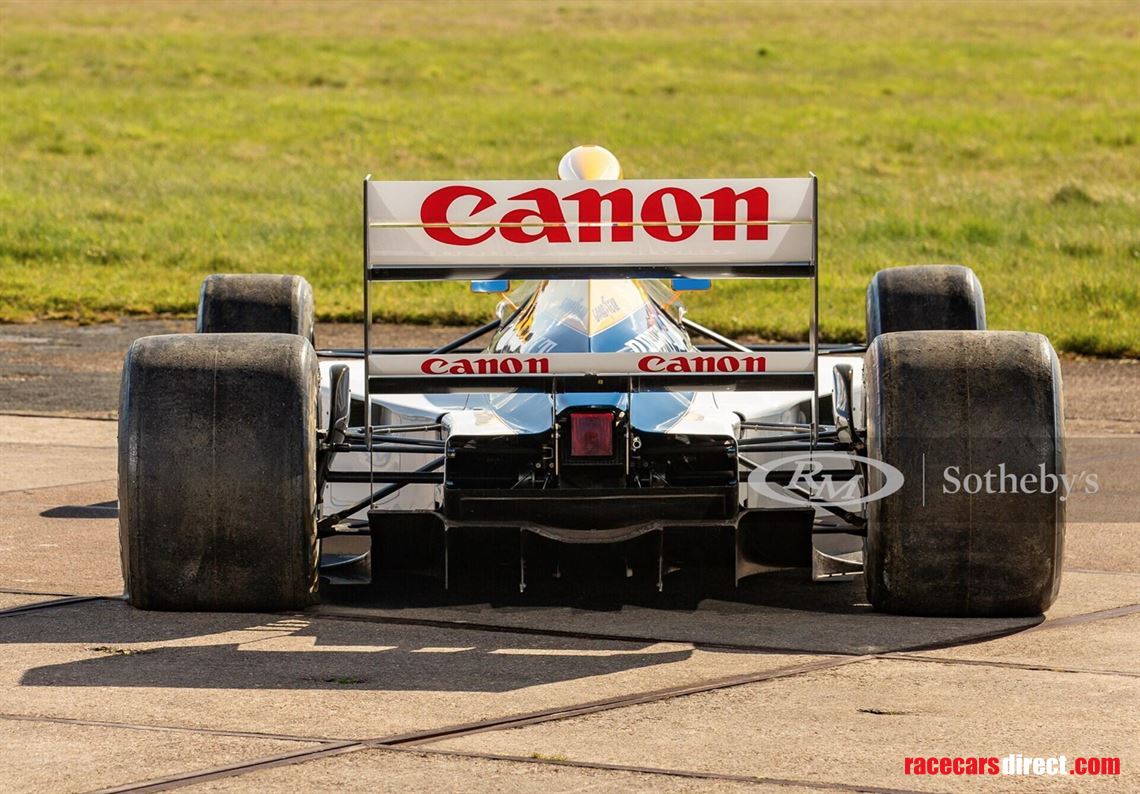 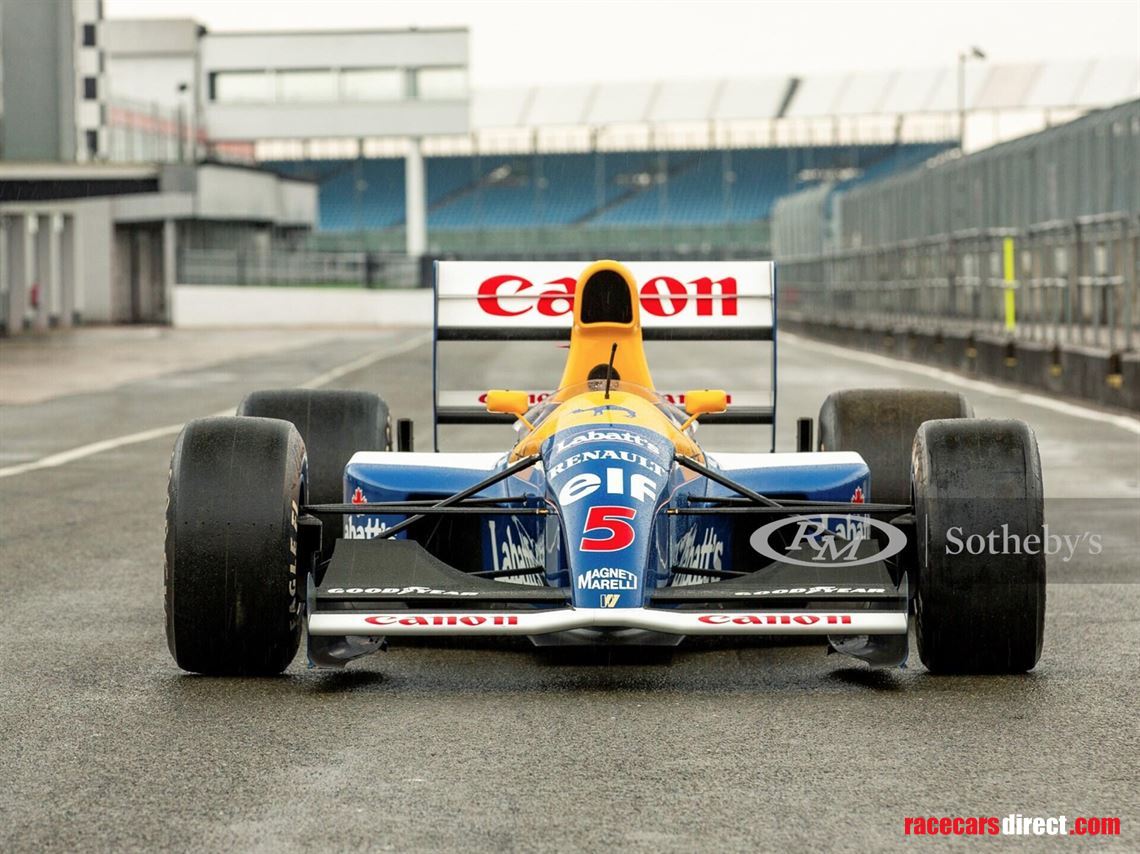 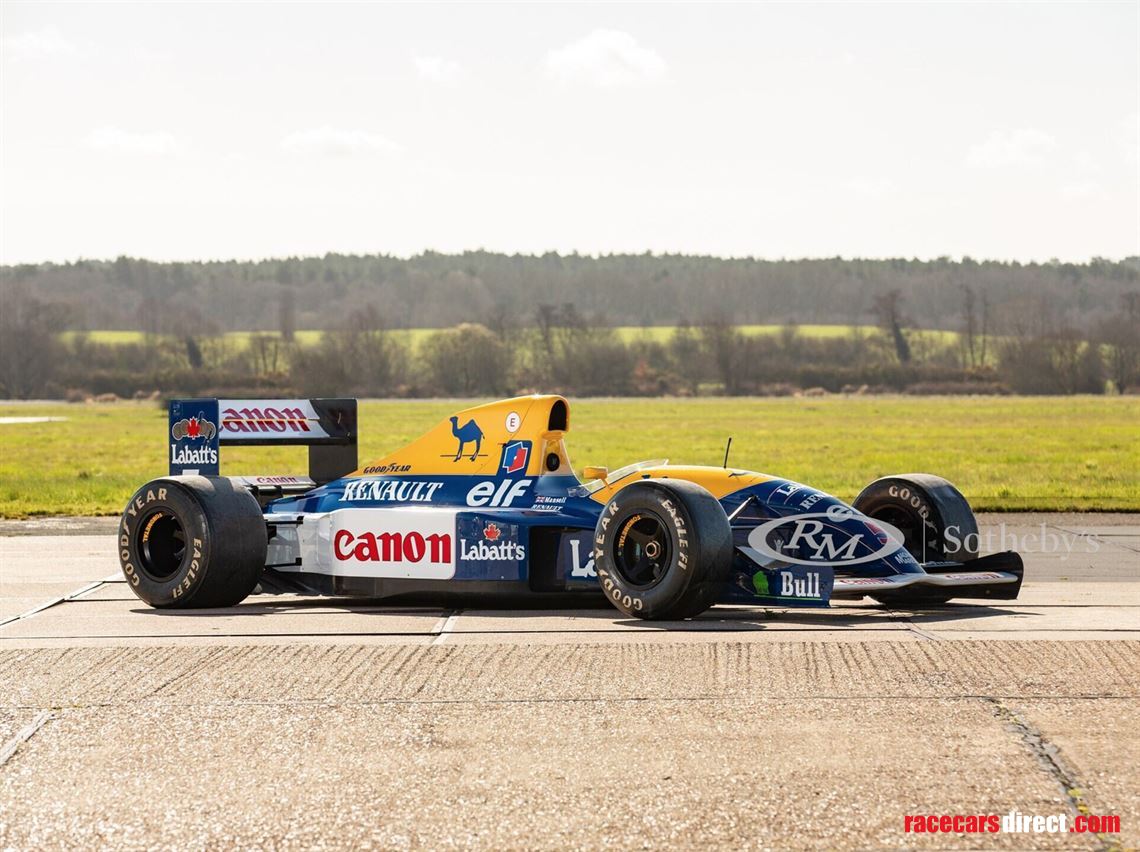 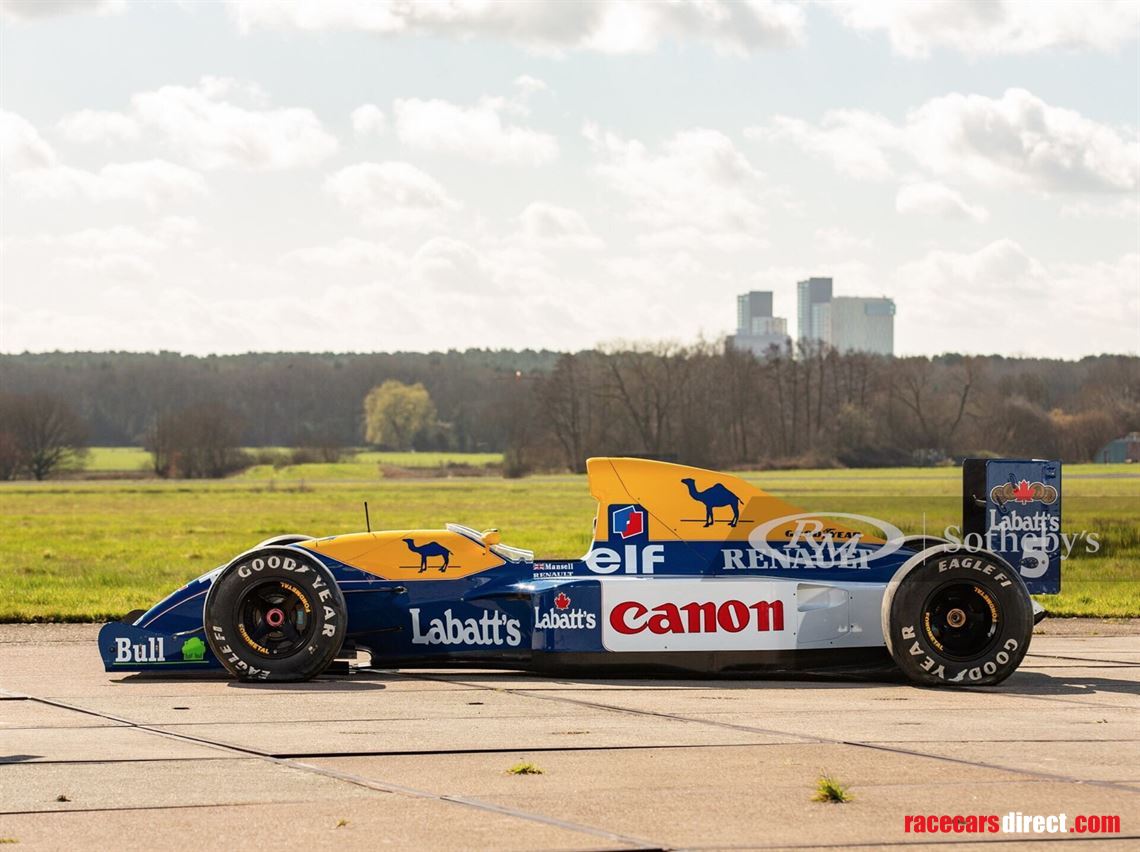 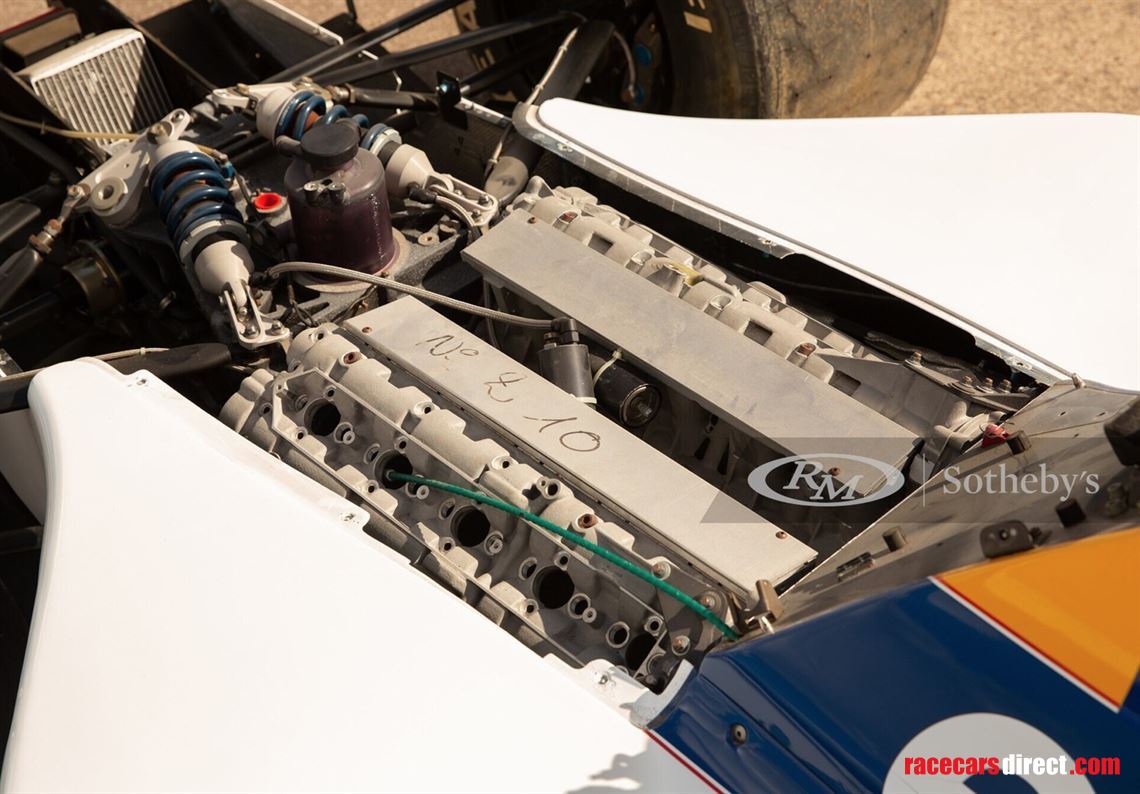 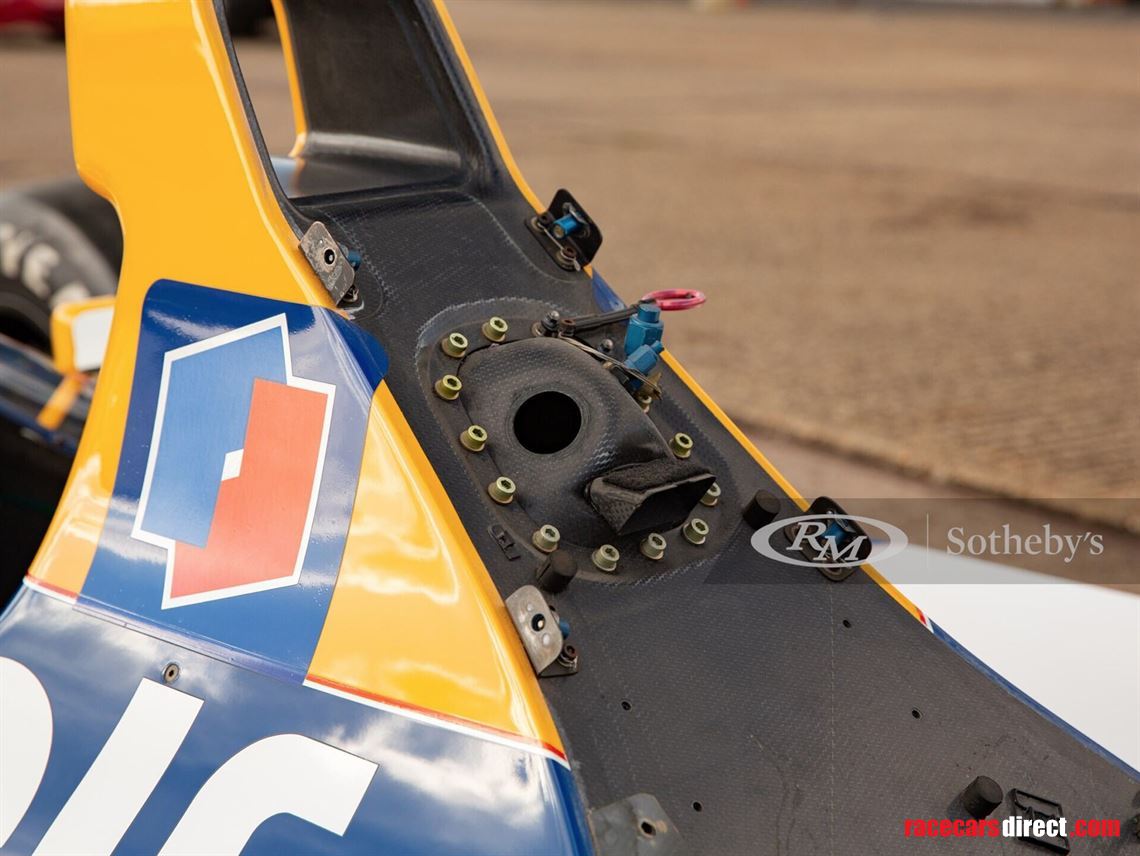 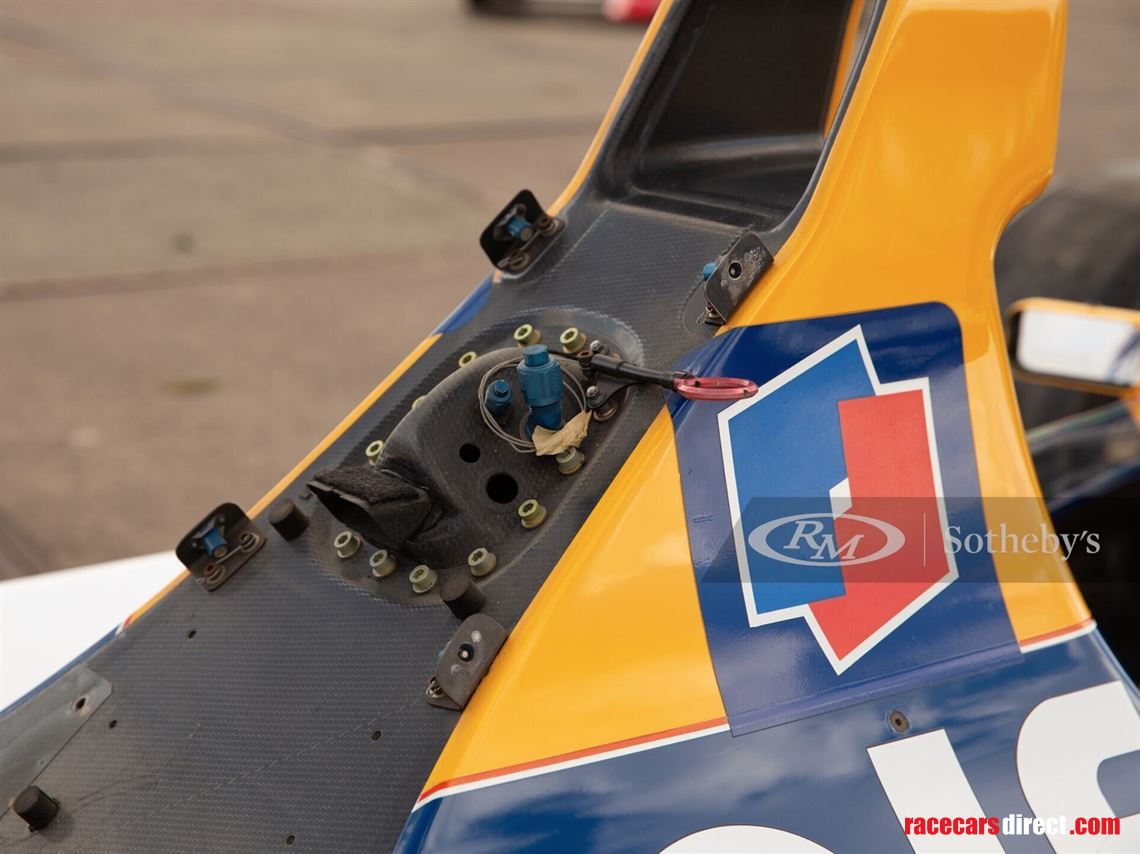 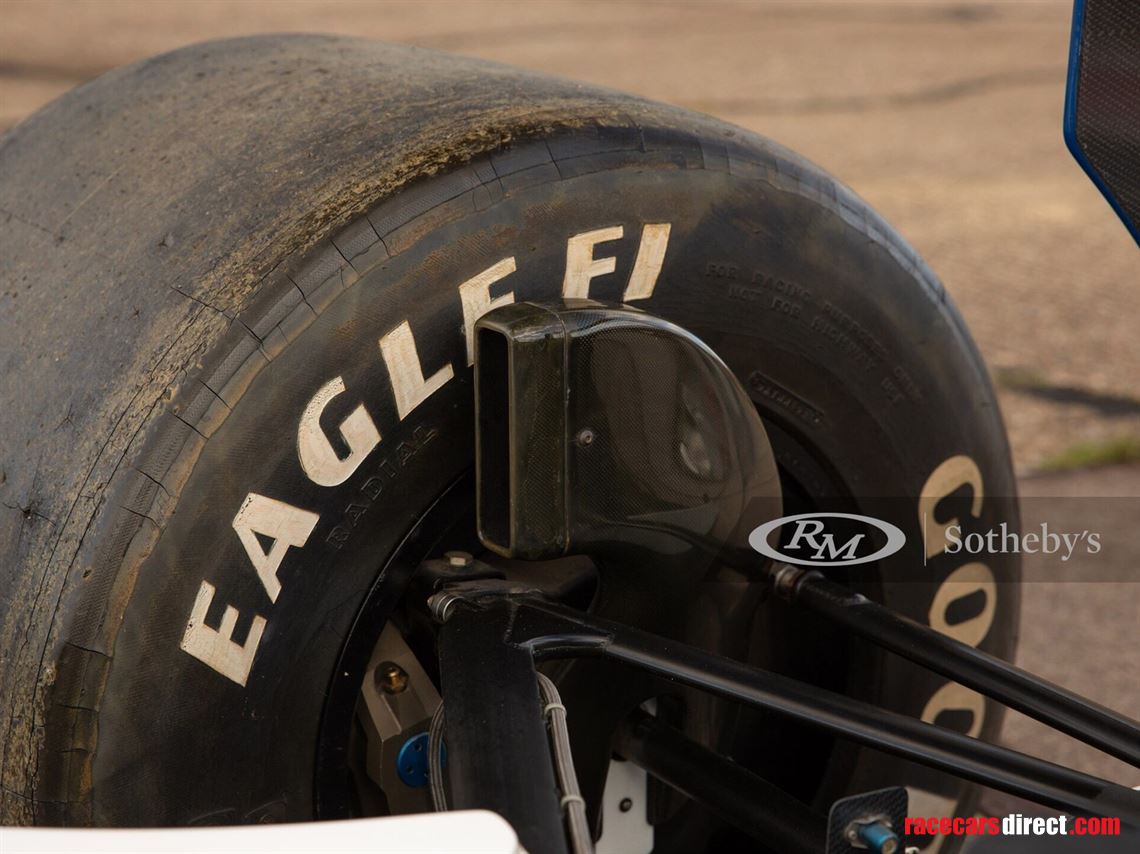 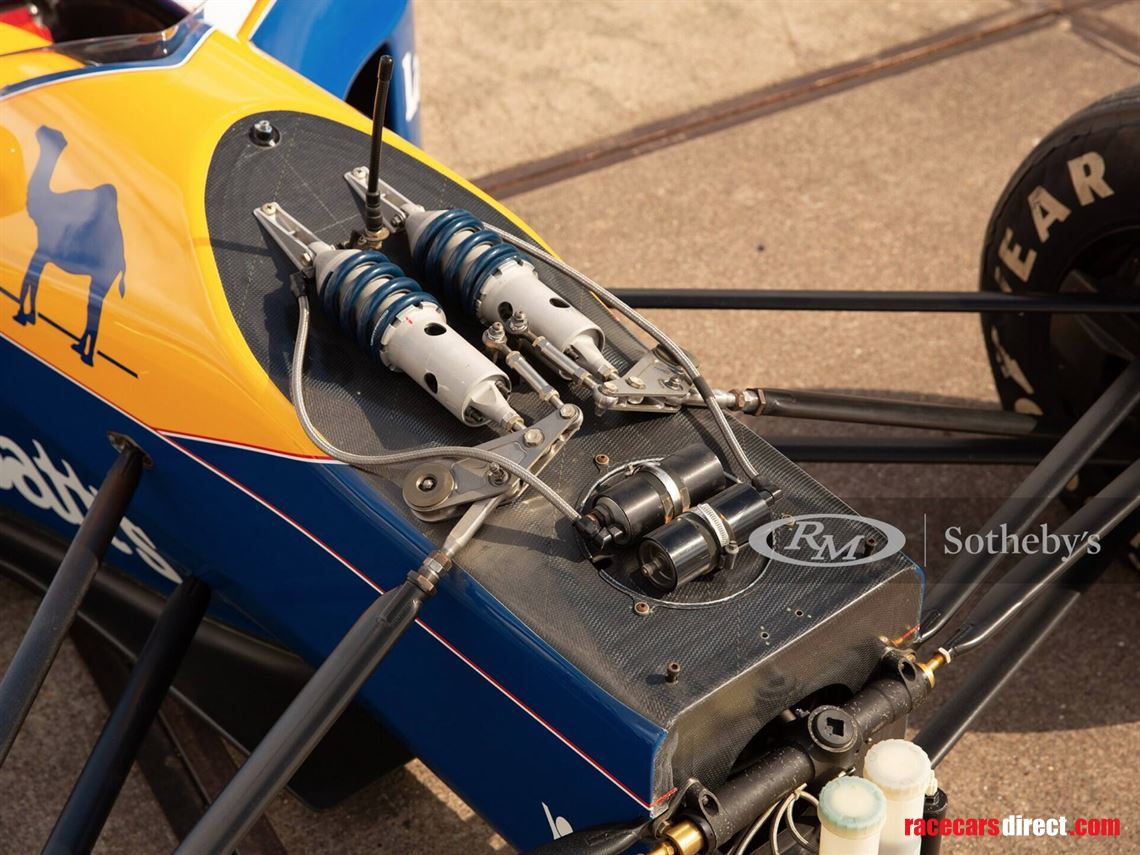 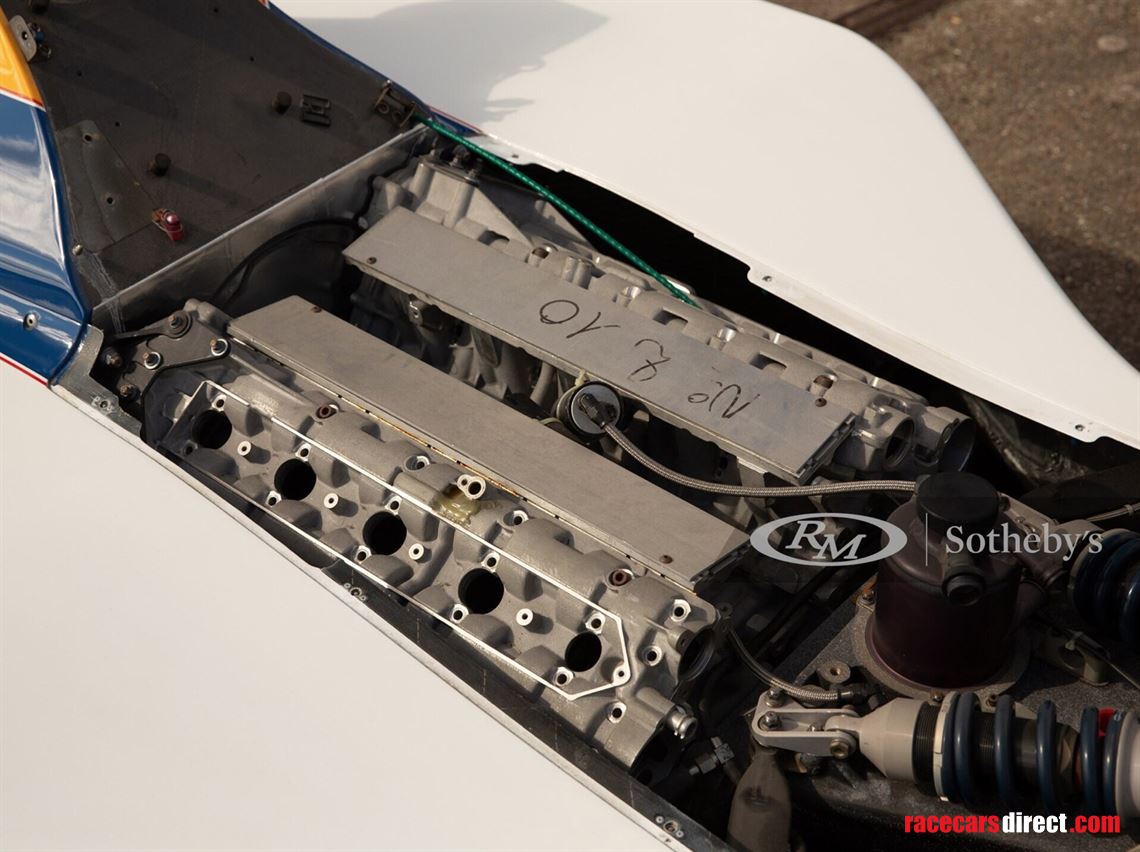 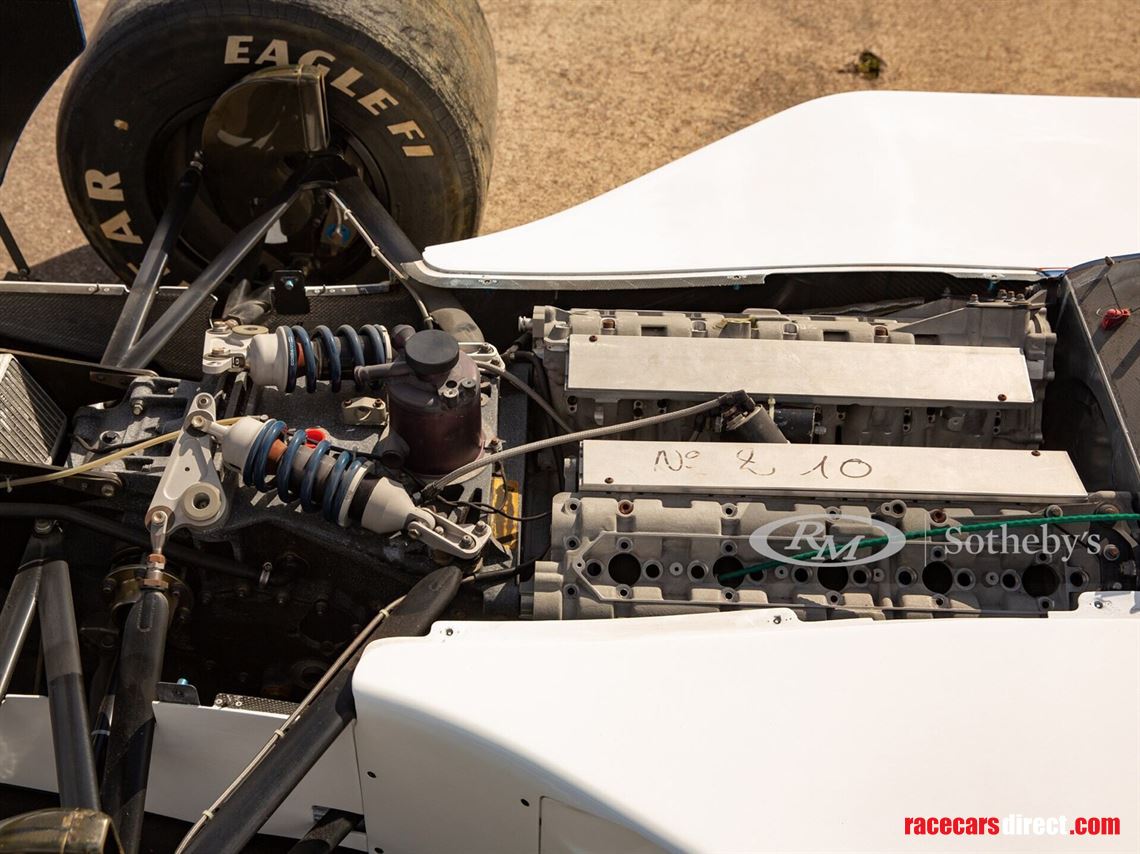 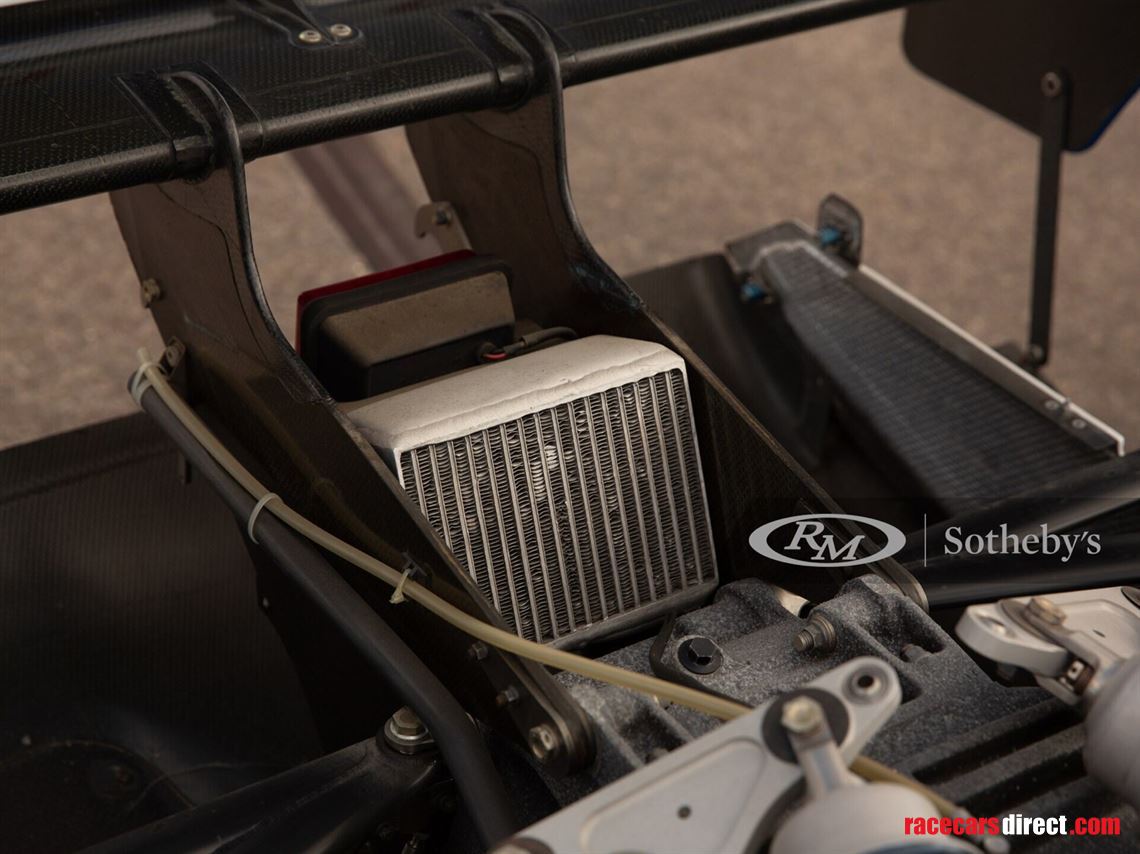 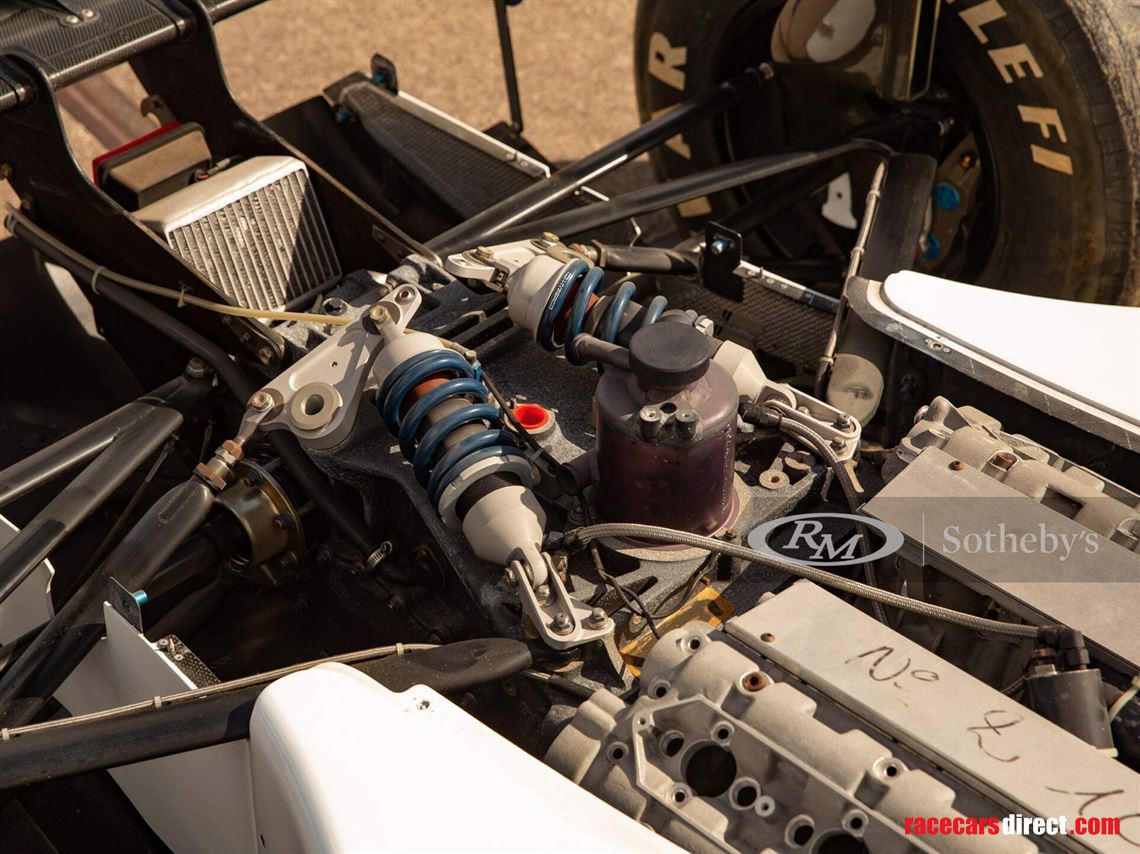 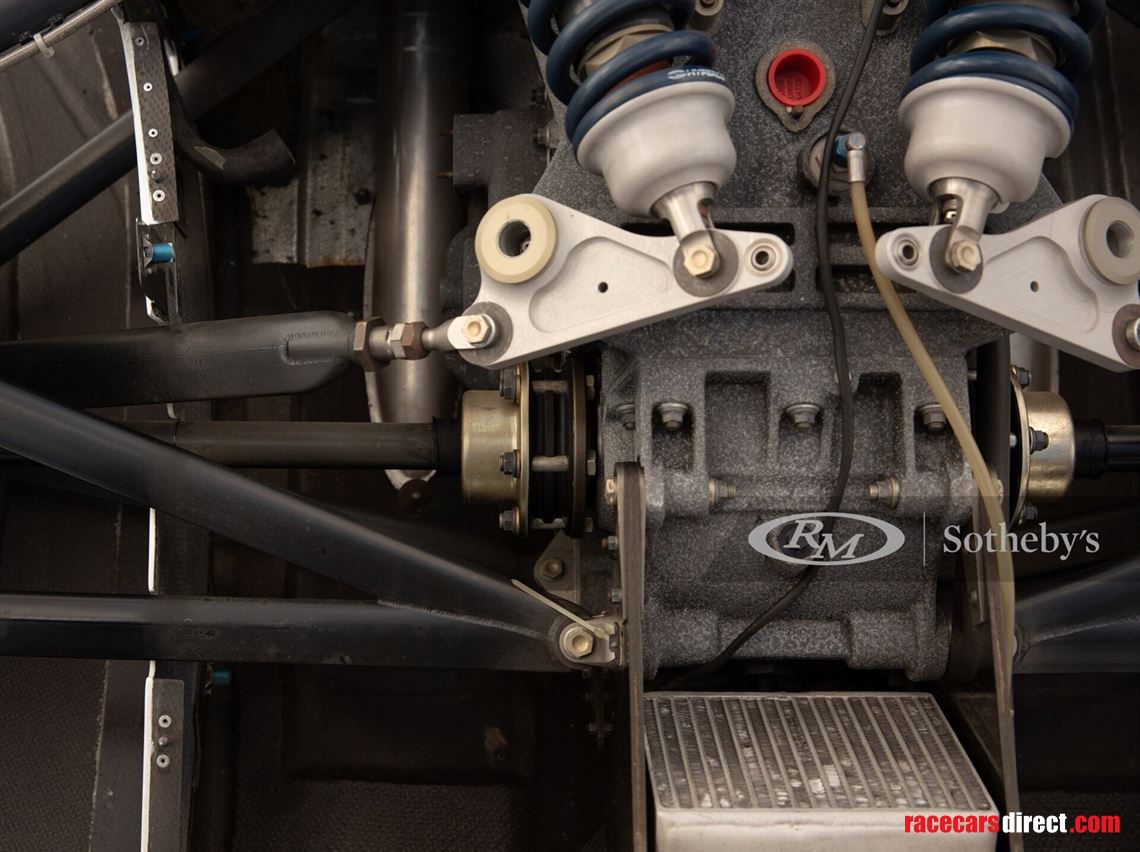 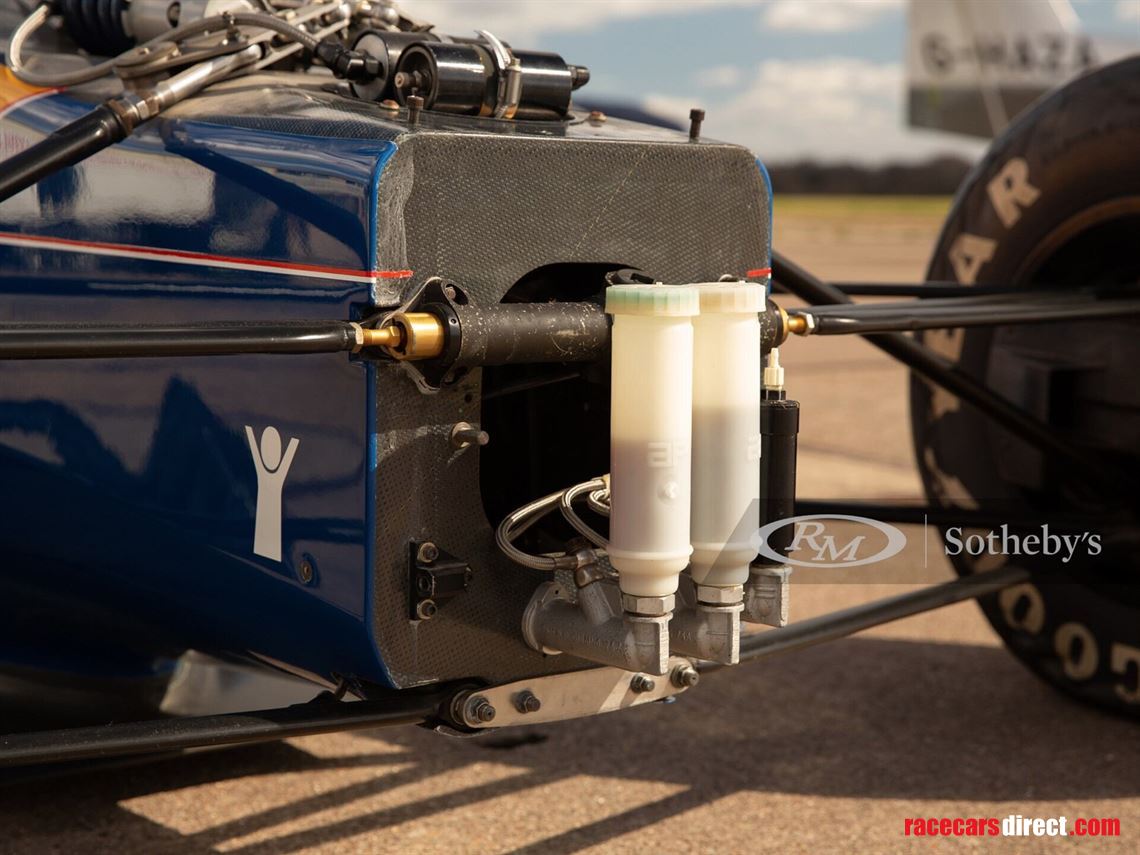 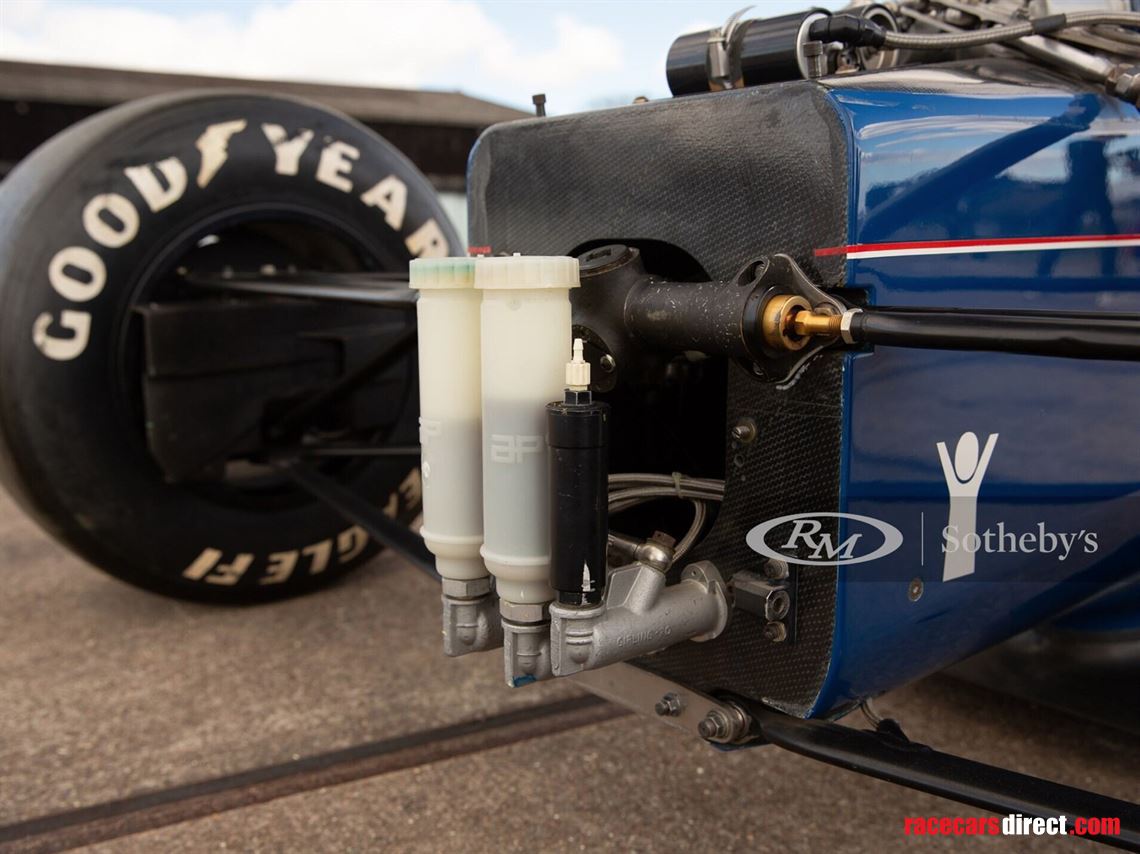 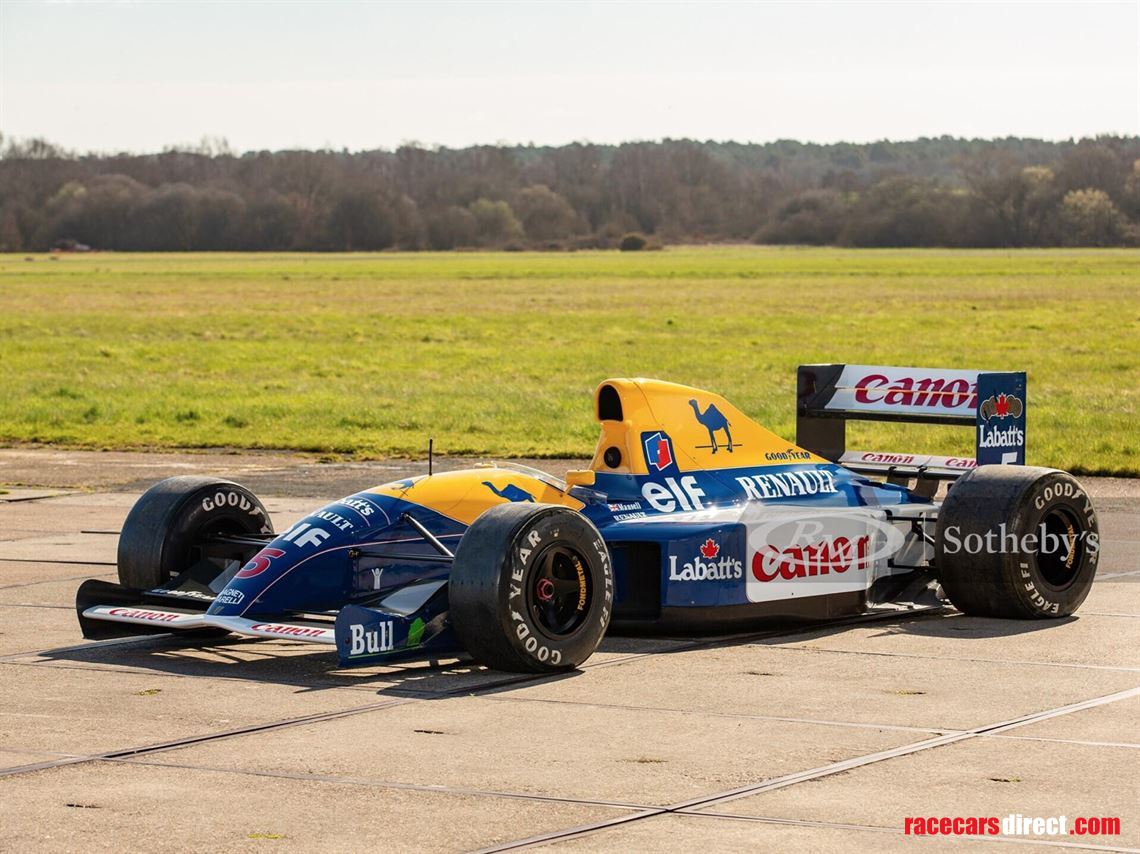 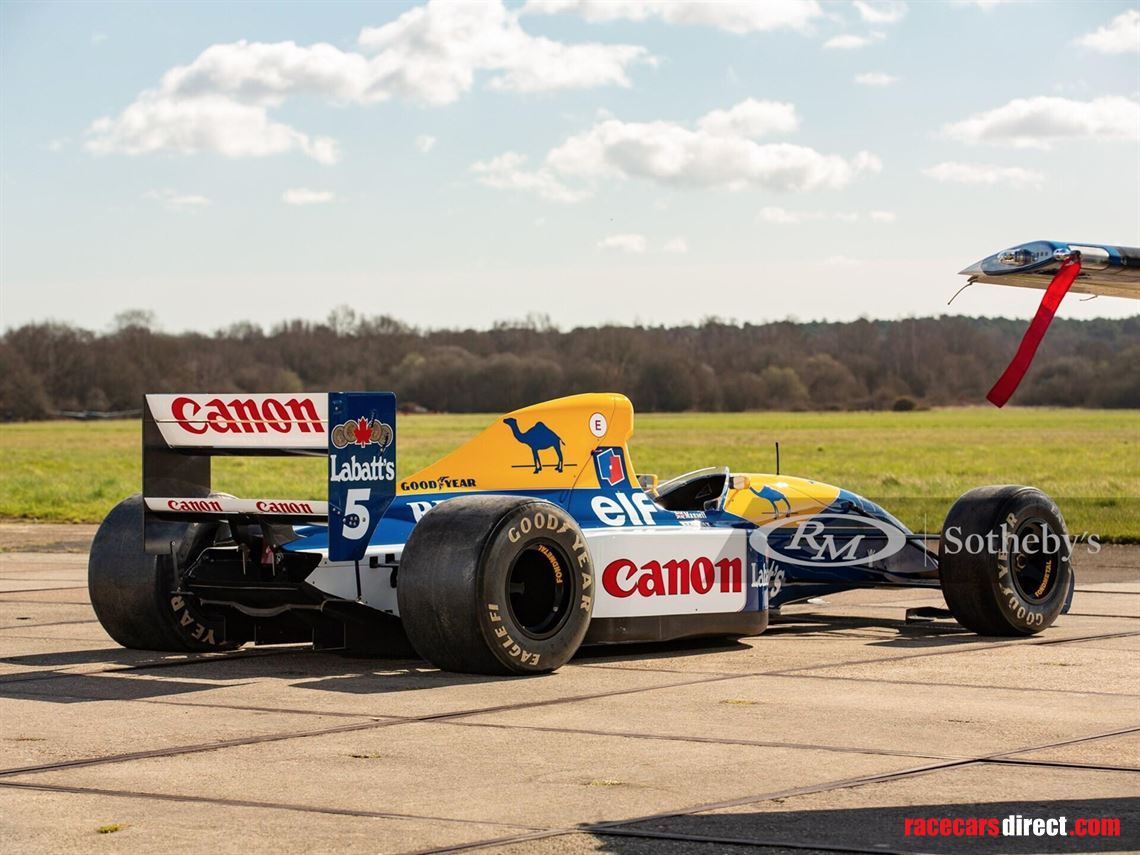 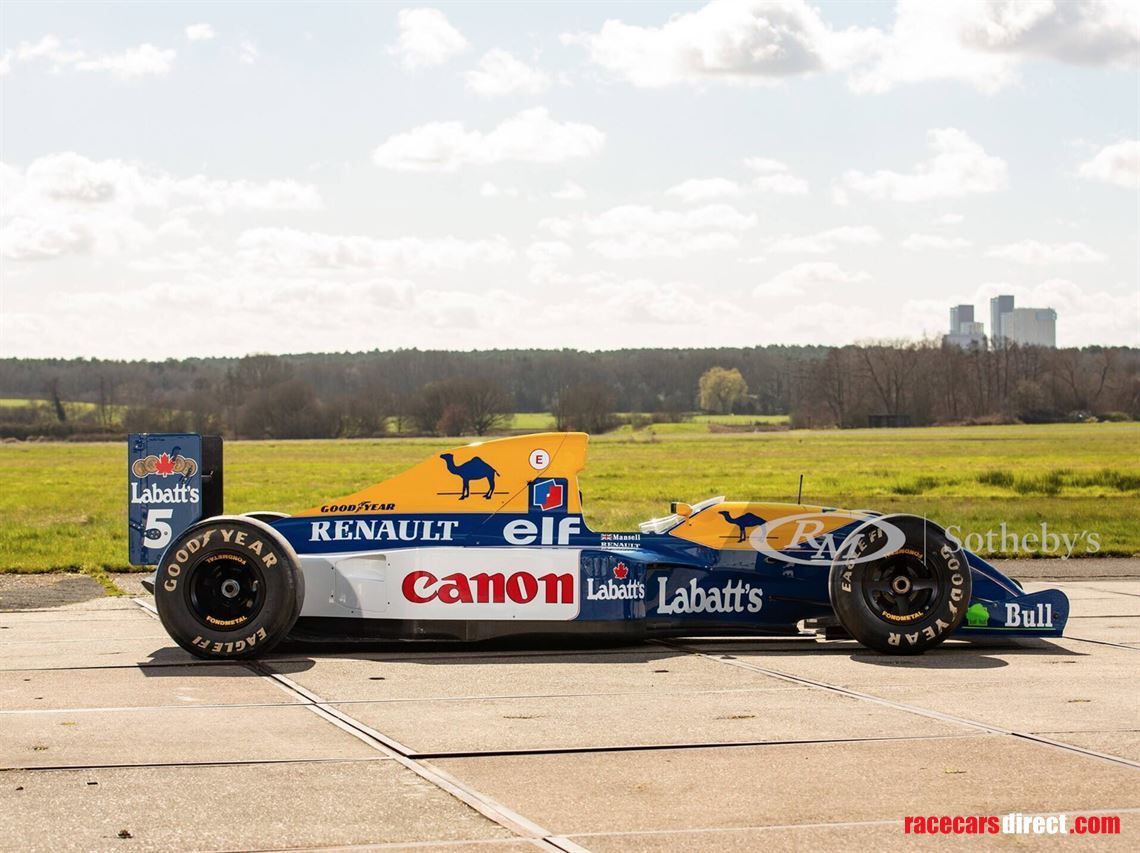 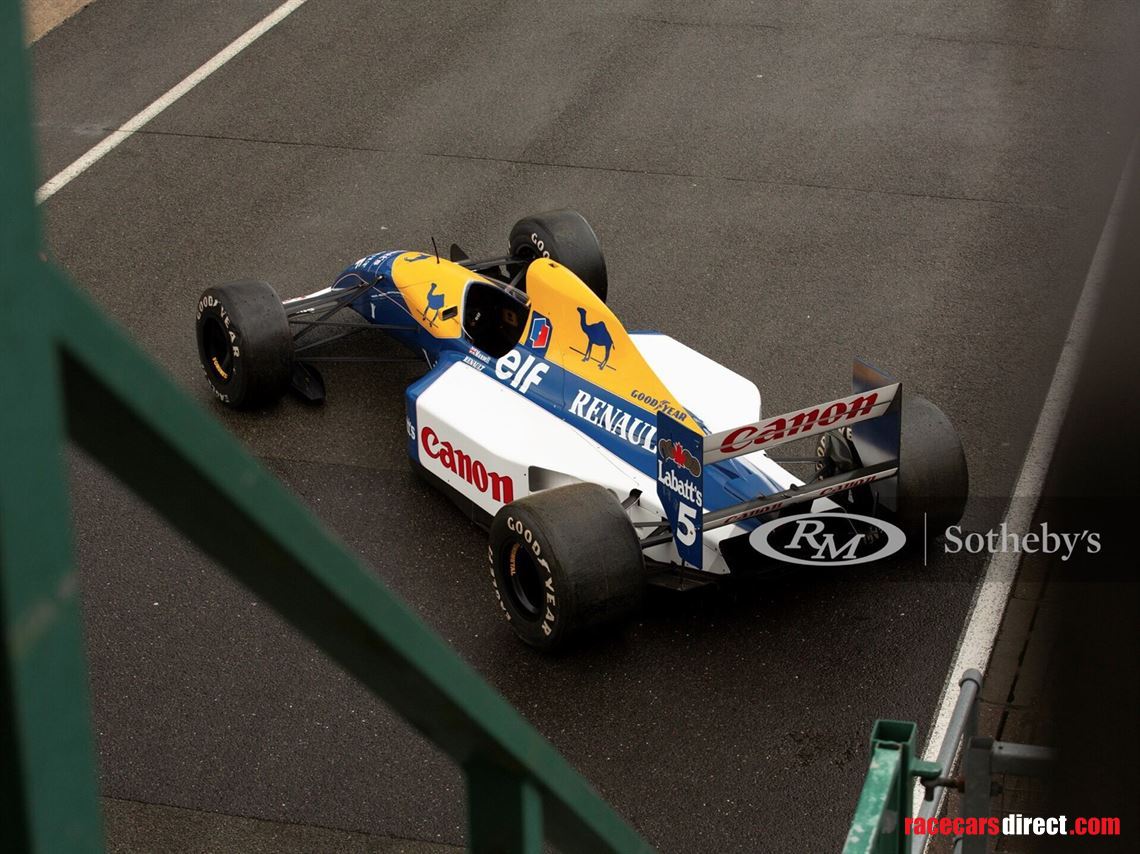 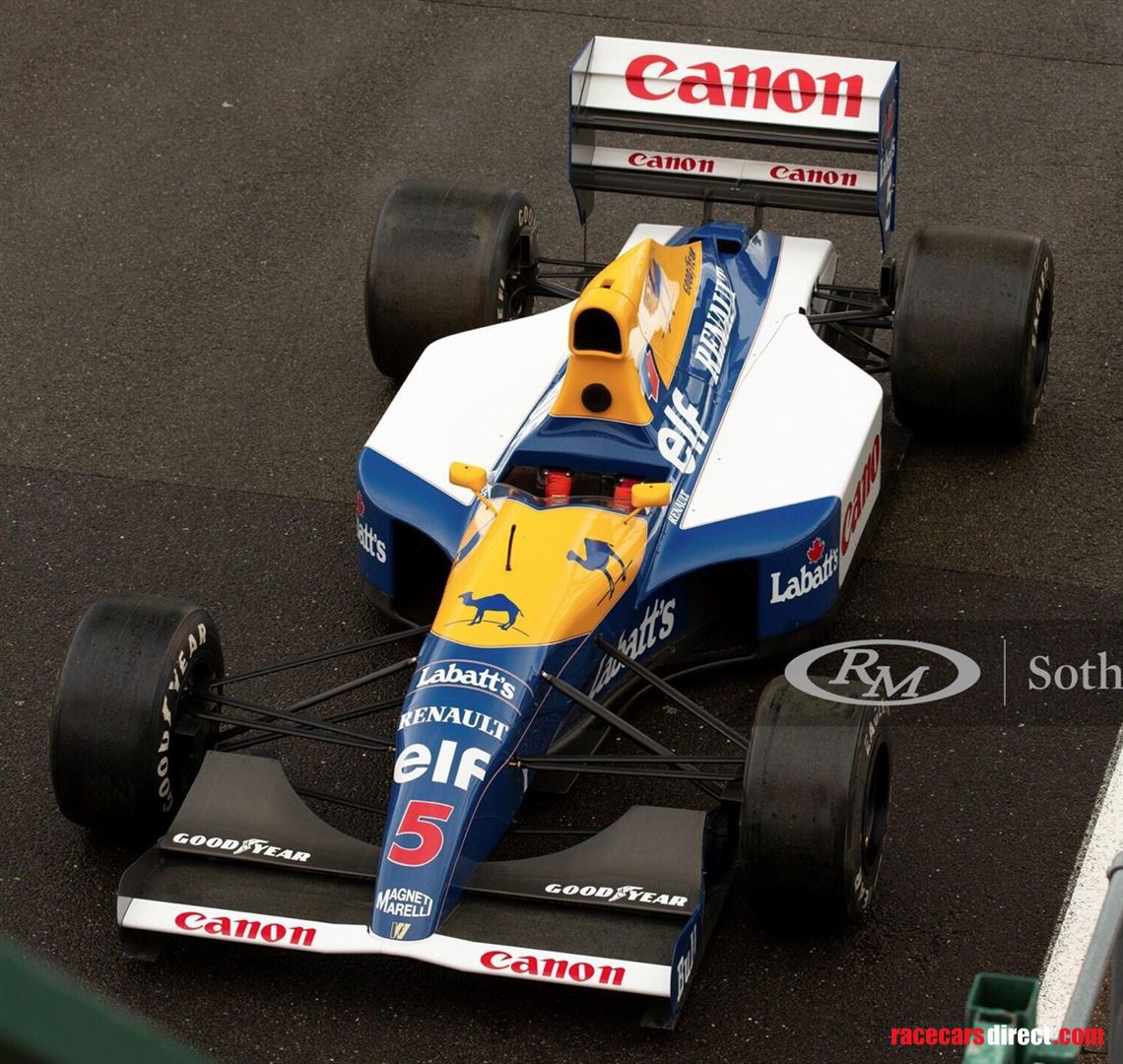 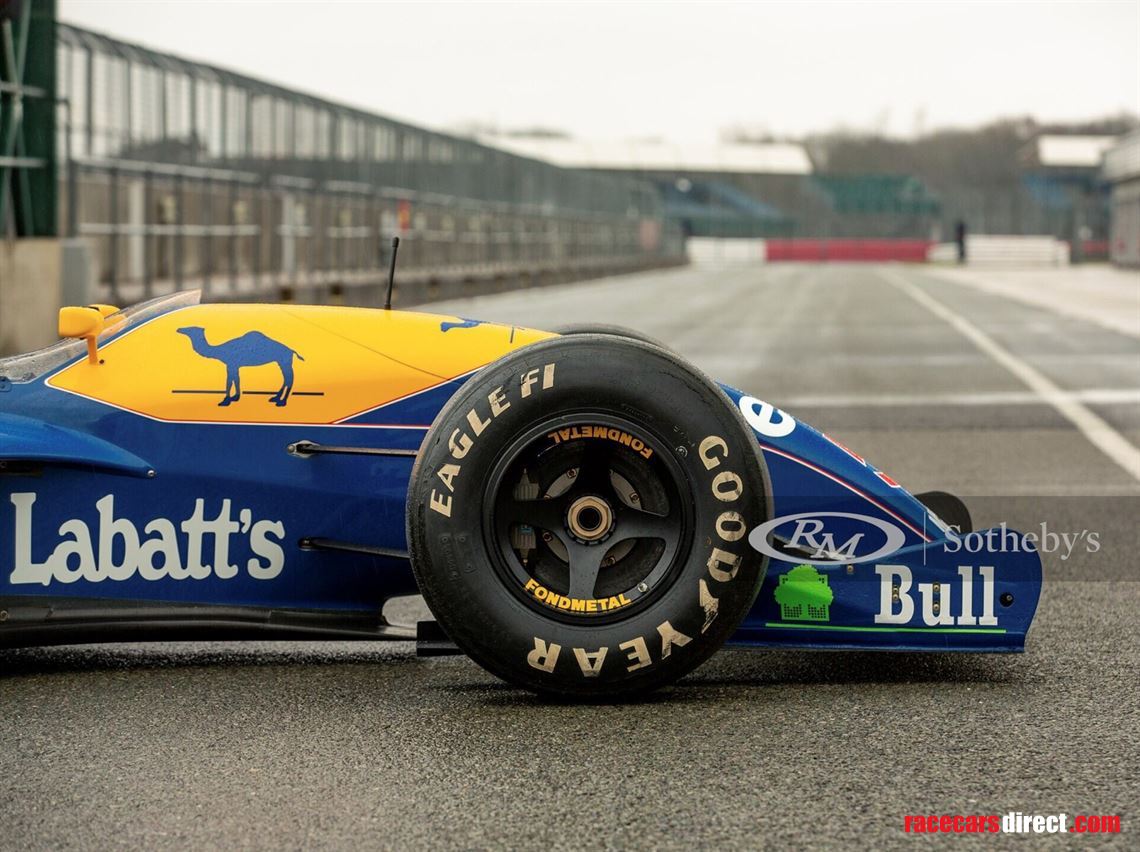 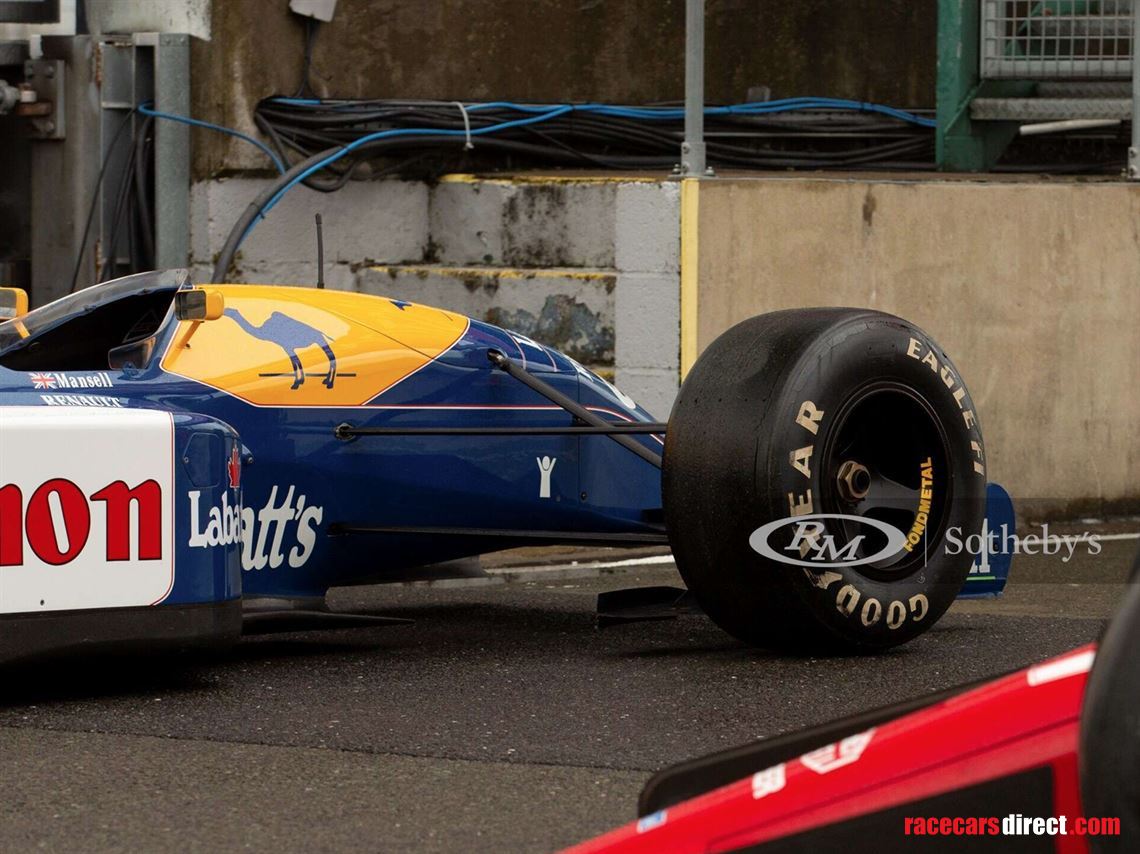 When Nigel Mansell elected to re-join Williams after two tumultuous years racing for Scuderia Ferrari, few could have predicted the thrilling end to the British racing driver’s long and ultimately successful Formula 1 career. Having come close to the Driver’s Championship on two previous occasions with Williams—finishing 2nd overall in successive years over 1986 and 1987, once behind Alain Prost and latterly behind teammate, Nelson Piquet—Mansell maintained ambitions of clinching the title for himself, which would be realised behind the wheel of a Williams car in 1992.

Though Mansell had been the last driver personally recruited by Enzo Ferrari to race for his team, the Englishman severed his ties with Formula 1’s most successful team to force the move back to Williams. His first season at Ferrari brought mixed success, getting to grips with the newly introduced semi-automatic gearbox in the Ferrari 640 to secure one race victory and finish 4th overall in the Driver’s Standings. Mansell viewed the season as one for development, pinning his hopes on the championship for the following year. That year would also prove to be tough for Mansell, who suffered from reliability issues in his Ferrari.

Tensions peaked at the 1990 British Grand Prix, where Mansell discovered the mechanics had swapped his car with Alain Prost’s at the request of the Frenchman. This proved to be too much, and Mansell announced he was retiring from Formula 1 following the race. Frank Williams grasped the opportunity to sign Mansell, and the driver returned to the team he had represented between 1985 and 1988. Williams agreed Mansell would be their lead driver, and successfully persuaded the Englishman to back away from retirement. Mansell signed to Williams on 1 October 1990.

Williams and engine provider Renault sought to improve on the results of the earlier FW13 and FW13B cars, which had underperformed in the respective 1989 and 1990 seasons. With a goal in mind, Adrian Newey was hired by Williams in 1990, having previously worked for March Engineering. Having thrived at March, Newey was able to advance the aerodynamics of the new Williams car and the completed product, dubbed the Williams FW14, was “all-new”, save for its 3.5-litre Renault V-10 engine. It was regarded as one of the most sophisticated and technologically advanced cars in Formula 1. Mated to the 700 horsepower Renault powerplant was a Williams six-speed sequential semi-automatic gearbox, the first of its kind fitted to a Williams car. The FW14 generated great excitement within Williams, and—coupled with the signing of Mansell in October 1990—it felt like a milestone in British motorsport history had been reached. The FW14’s future looked bright ahead of the 1991 Formula 1 World Championship.

For the first six races of the 1991 season, Mansell drove a chassis numbered “FW14-2”. Despite suffering from gearbox troubles in the first three races, he went onto achieve good results with 2nd at the Monaco and Mexican Grands Prix. When 7 July 1991 approached, Mansell selected chassis FW14-5—the car offered for sale here—and on its debut race at Magny-Cours, he secured his first Formula 1 victory of 1991. The French Grand Prix was a sign of things to come.

On 14 July, Mansell highlighted the dominant nature of Newey’s design, qualifying in pole position and claiming an outright victory at the British Grand Prix. Chassis FW14-05 dominated the entire race, finishing a mammoth 42.293 seconds ahead of Gerhard Berger in his McLaren MP4/6. Ayrton Senna crossed the line in 4th, but ran out of fuel on lap 58. During his victory lap, Mansell famously stopped on the circuit, indicating to Senna to climb aboard, driving the Brazilian back to the pit lane. This is arguably one of the most iconic moments in Formula 1 history, and chassis FW14-5 provides the opportunity to own a piece of motorsport folklore.

Mansell continued his winning streak in chassis FW14-5, and was victorious at the German Grand Prix. In Hungary, Mansell finished behind Senna, yet Williams continued to highlight the competitive nature of the FW14 by finishing 2nd and 3rd respectively. At the Belgian Grand Prix, chassis FW14-5 suffered from electrical issues, causing Mansell to retire on lap 22. On 7 September 1991, in qualifying for the Italian Grand Prix at Monza, Senna took pole position ahead of his Championship competitor Mansell. On race day, Mansell would prove his superiority in chassis FW14-5, finishing with a huge time gap of 16.262 seconds ahead of Senna and taking 1st place. Mansell had shown that he and FW14-5 could beat Senna’s McLaren MP4/6 in head-to-head racing.

At that stage in the 1991 Driver’s Championship, there was all to play for, as only 18 points separated Mansell from Senna and there were still four races left. At the Portuguese Grand Prix, the race was shaping up nicely for Williams and by lap 18 Mansell had taken pole position. However, disaster struck when Mansell pitted on lap 29 and the crew failed to correctly secure his right rear wheel, which rotated off, leaving Mansell stranded. It a state of panic, the crew fitted a fresh wheel to chassis FW14-5 outside of the pit box, disqualifying Mansell. Following Portugal, Mansell placed himself back into contention for the Driver’s Championship. At the Spanish Grand Prix, Mansell and Senna fought viscously in the early stages of the race. With the pair millimetres from each other on the main straight Mansell took Senna’s position and fought his way up the grid to 1st place. Heavy rain at Catalunya allowed Mansell to maintain his lead, as his competitors struggled on the slick asphalt. Mansell won, but more importantly, Senna finished in 5th, meaning that the title race was back on. 16 points now separated Mansell from Senna.

The penultimate race and the decider of the Driver’s Championship was hosted in Japan at Suzuka. At the start, Mansell was blocked by Senna and continued to hound the Brazilian until lap nine, when the British driver unfortunately come off on the first corner, spinning off and burying chassis FW14-5 in the gravel. With Mansell stuck, the McLaren team soldiered on, and Senna would be World Champion for 1991.

The Australian Grand Prix marked the end of the season, bringing with it torrential rain and near- impossible driving conditions that led to the race being called-off on lap 14 due to safety concerns. The results stood as the standings were when the race was called, with Senna in the lead and Mansell in 2nd place. By this point, both the World Championship and Constructors’ Championship titles had been confirmed, with Senna recrowned as Driver’s Champion and McLaren winning the latter.

In 1991, the Williams FW14 had shown it was extremely competitive, with chassis FW14-5 claiming victory on no fewer than five occasions, alongside two 2nd-place finishes. Mansell and Williams had proved to be lethal combination and a threat to McLaren dominance. In the 1992 season, the FW14B—a revised version of FW14—allowed Mansell to beat Senna, earning him his first Formula 1 World Championship title, announcing his retirement for the second time soon after, though he did later compete for Rothmans Williams Renault in 1994 and Marlboro McLaren Mercedes in 1995.

At the end of the 1991 season, Williams gifted Mansell chassis FW14-5 in recognition of the success of his return to the British team. This Formula 1 icon has remained in the sole possession of Mansell for over 30 years, spending much of this time on static display. The Williams will need mechanical inspection and recommissioning prior to returning to the race track; please contact an RM Sotheby's Specialist to find out more about its mechanical condition. As a true icon representing a golden age of motorsport, this FW14 presents a truly rare opportunity to acquire one of the most revered Formula 1 cars of the modern era.

For more photos and for details on how to bid please follow the link below.

Offered Without Reserve by RM Sotherby's - Monte Carlo, Monaco 14 May 2022.