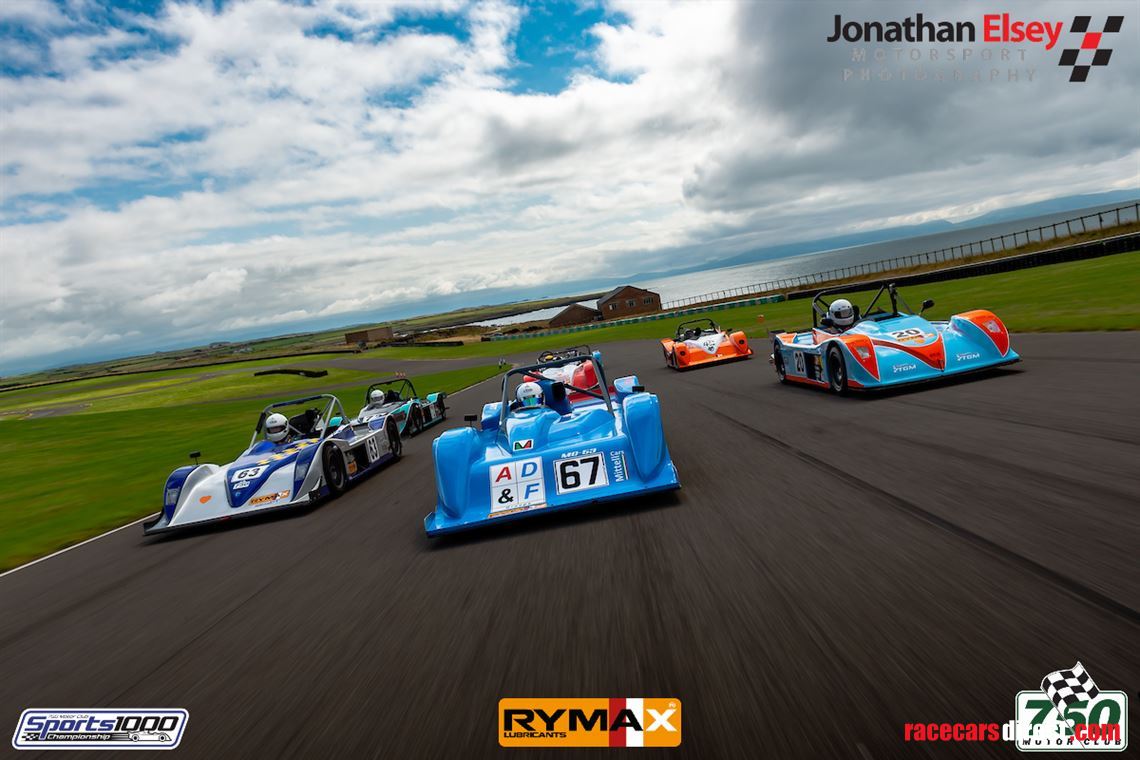 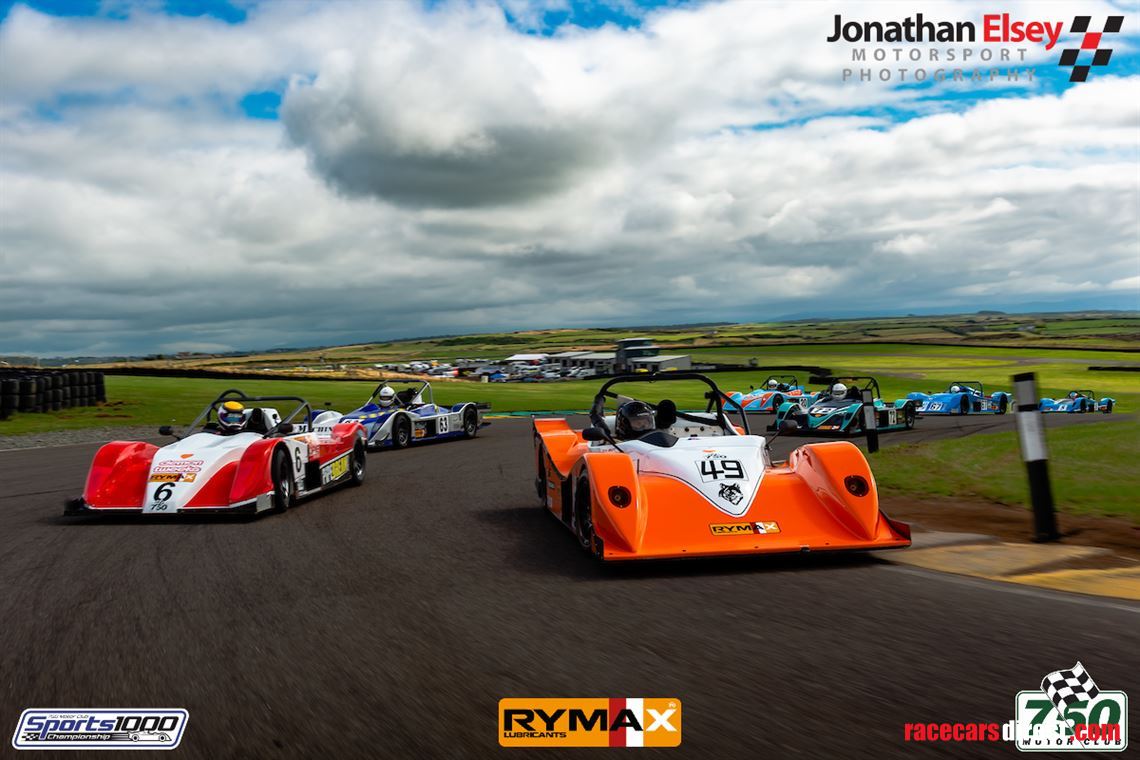 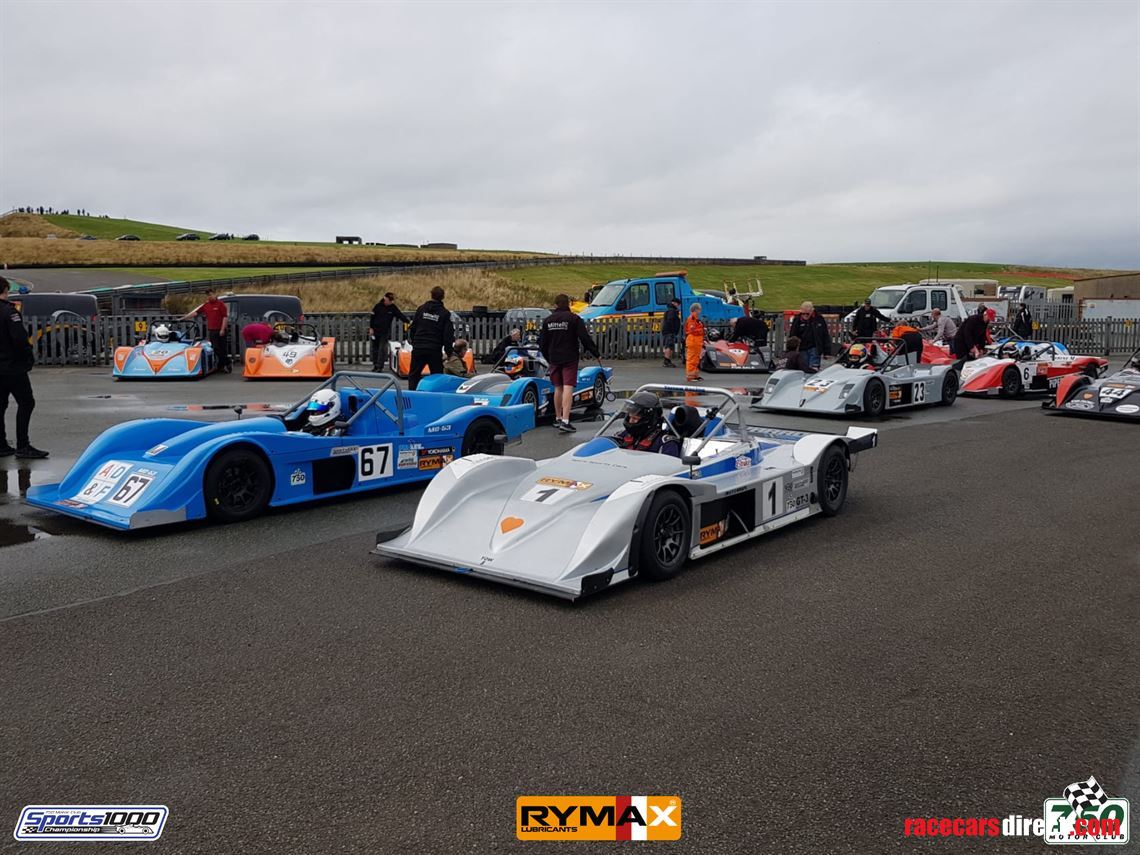 The Rymax Lubricants Sports 1000 Championship travelled to North Wales and the beautiful Anglesey Coastal circuit for its Fourth race meeting. The location produces its own microclimate, making it increasingly difficult to gauge what weather may be coming for the impending races. The decision for what setup and tyres to choose would prove decisive for the whole grid throughout the weekend.

It was the defending Champion Ryan Yarrow who judged his setup perfectly in the qualifying session amid the extremely changeable conditions and took Pole Position by 1.64s. Both the Blue Mittell’s of Victor Neumann and Michael Roots would line up behind in Second and Third respectively separated by 0.7s. Matthew Minett had again shown his pace on a qualifying lap lining up on the grid in Fourth. One to watch in the first race would be Rich Miles, who had qualified in 11th on the unfavourable dry tyres on the wet track.

As the lights went out, both Yarrow and Neumann would go side by side going in to the first corner, Yarrow would hold the inside line and maintain his position. This is the last anyone would see of the current Champion as he would extend his lead to nearly 12s by the end of the race.

The two Mittell’s of Neumann and Roots would scrap for Second as the #5 of Roots would use superior traction on the exit of The Banking to gain the march on his teammate. The Red Mittell of Dan Larner would jump to Fourth from the line from Sixth on the grid. Both Roots and Larner would start on Wets, the track would dry out as the race progressed making it trickier for them to fight for positions.

Rich Miles would start carving his way through the grid from his starting position of 11th , he would make up Three positions on the first lap promoting him to Eighth. Colin Chapman would follow Miles in Ninth and start to make progress through the field after falling back a couple of positions from the start. Neumann would challenge Roots at the Corkscrew on the next circuit to claim back his position he had lost on the previous lap.

Carl Austen would capitalise on a good tyre decision and challenge Larner for Fourth, he would make his way past extending the gap to hold the position. James Walker would start gaining positions and start his race long dice with Larner for Sporting Cup honours. This battle would wage on for 11 laps of the race with Larner putting up a valiant defence on the wrong choice of Wet tyres. By lap 3, Miles had made his way in to Sixth position and was in the centre of a Nine car train for Third as the wet tyres of Roots started to overheat on the ever drying surface. Austen would be the first to make his way past the Mittell with Miles following suit soon after. Back at the front of the field, Yarrow was setting multiple fastest laps of the race and easing away from Neumann who was also in a comfortable Second place. Chapman behind did not waste time passing McGill, Larner and Roots in as many laps to move up to Fifth and started to make time on the cars in front. The two cars in front where fighting hard over Third position, Miles would pass Austen after gaining a superior exit at the Bus Stop and continued his charge on the podium. Tony Gaunt and Tim Hoverd were well inside the Top 10 and could not be separated for the entire race. Eventually Gaunt sent a precision move up the inside at Seamans to finish Eighth and Ninth for the Wolff and Sabre self built machines.

Back with the battle for Sporting Cup honours; Larner had held off Walker until his tyres could not take anymore and on the penultimate lap, Larner lost the rear through the Corkscrew with Walker securing another Win in the Sporting Cup.

Ryan Yarrow would go on to take his Fourth win of the year from Neumann in Second and Miles who came from 11th on the grid to finish Third. Roots would retire with a broken gear lever to further lament his struggle in the race. He would start at the back of the grid for Race 2.

The second race of the weekend would prove to be far closer than the first. The familiar Spire and Mittell combo would line up at the front of the grid. The Blue Mittell of Neumann would get the better launch from the line however Yarrow would again keep the inside line and exit the first corner ahead of the Frenchman. Rich Miles would slot in behind them in Third with a fast starting Colin Chapman moving up to Fourth passing Carl Austen as the lights went out.

Michael Roots made his way up to Sixth position after starting 15th on the grid making passes throughout the first lap, which proved vital in salvaging a result from the race meeting. He would not waste time promoting himself up to Fourth as he passed the Spires of Walker and Chapman.

On the outskirts of the Top 10 a Septet of racers grappled for Ninth; including Hoverd, Hutchins, Minett, Hutchinson, Larner, Johnston and Austen who had fallen back down the field.  Tony Gaunt had managed to free himself from this large group and was moving forward to catch the Spire of Reigning Sporting Cup Champion Jon McGill.

Neumann started to reel in Yarrow at the front of the field. The young Frenchman had pushed to within 0.4s setting the fastest lap of the race in order to get on the rear of the Spire. Roots continued his lightning pace, catching Rich Miles who had developed an issue with a slipping clutch. Roots took full advantage and slid up the inside at Rocket to gain another place into Third position.

In the battle for Fifth, Walker had been challenging Chapman for 14 laps with the gap hovering over 1.0s throughout until an issue for Walker ended the contest. This allowed McGill who had been creeping up on both the cars ahead of him to pass Walker to secure another win in the Sporting Cup. The skirmish for the lead continued with Neumann catching Yarrow in Rocket, the Mittell and Spire went side by side through Rocket Out but ultimately to no avail. Yarrow went on to set the fastest lap of the race to gap Neumann by 2.8s and win the Second race of the weekend.

The next round is at Brands Hatch on the 11th/12th September.

Turatello SR320 race trailer. Configure this race truck to meet your particular needs and stand out