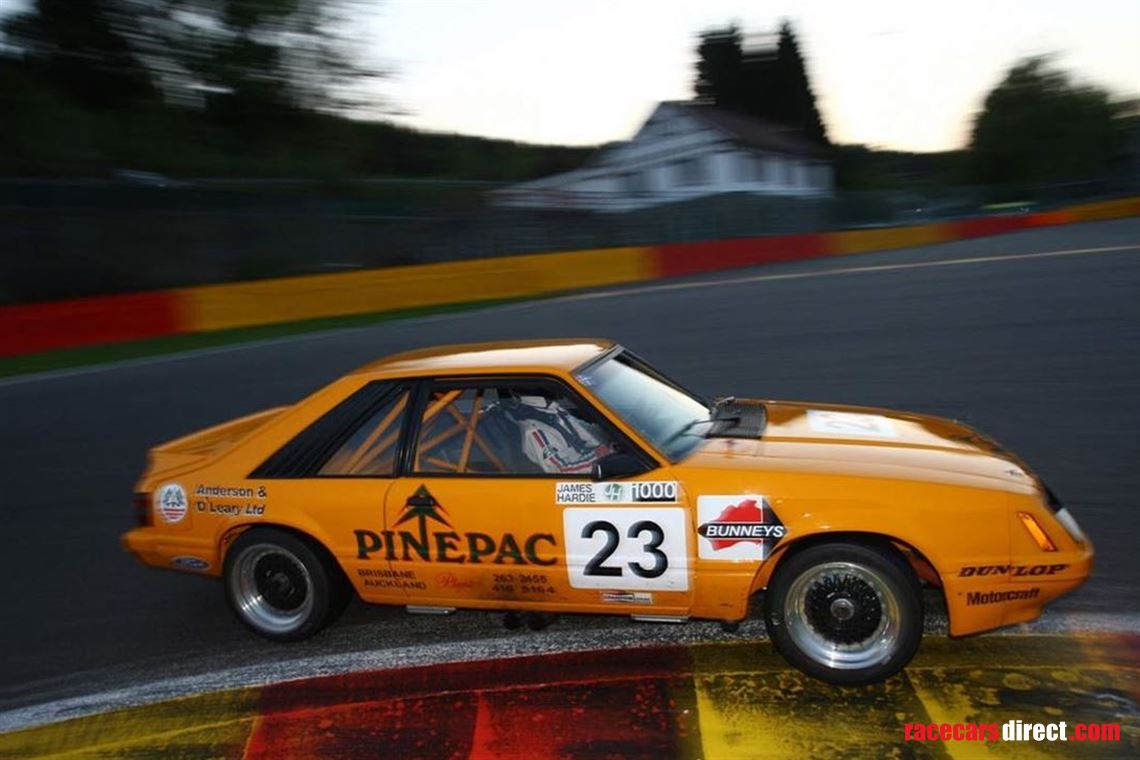 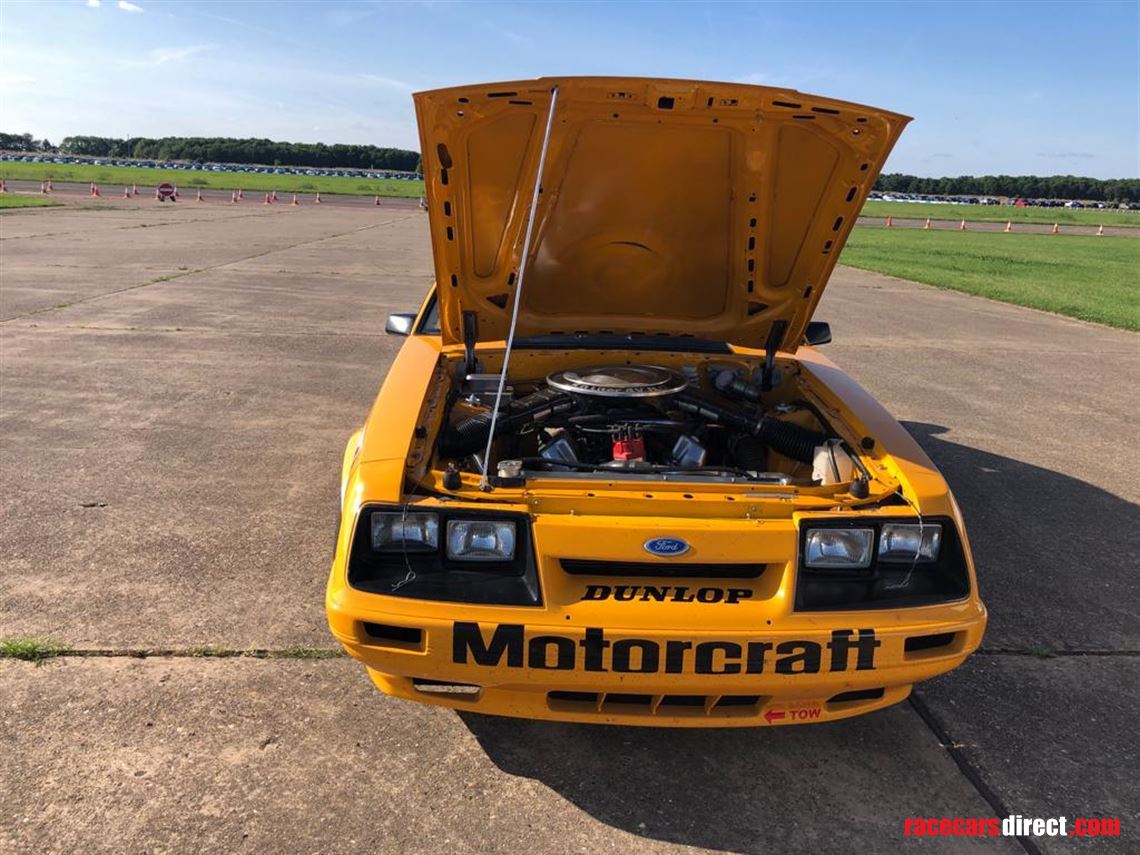 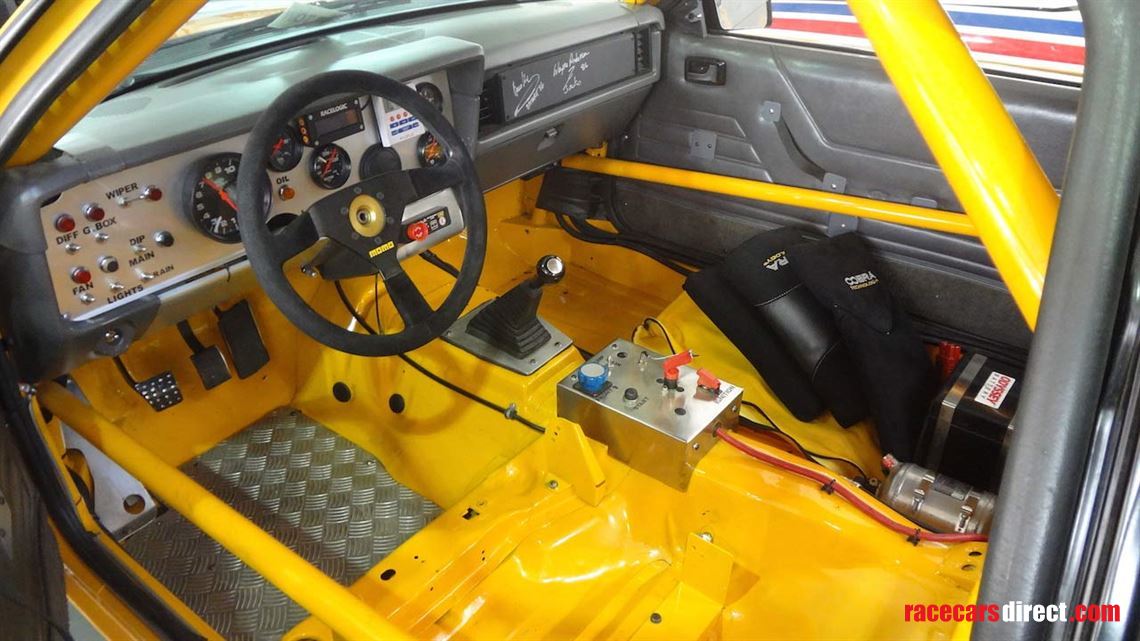 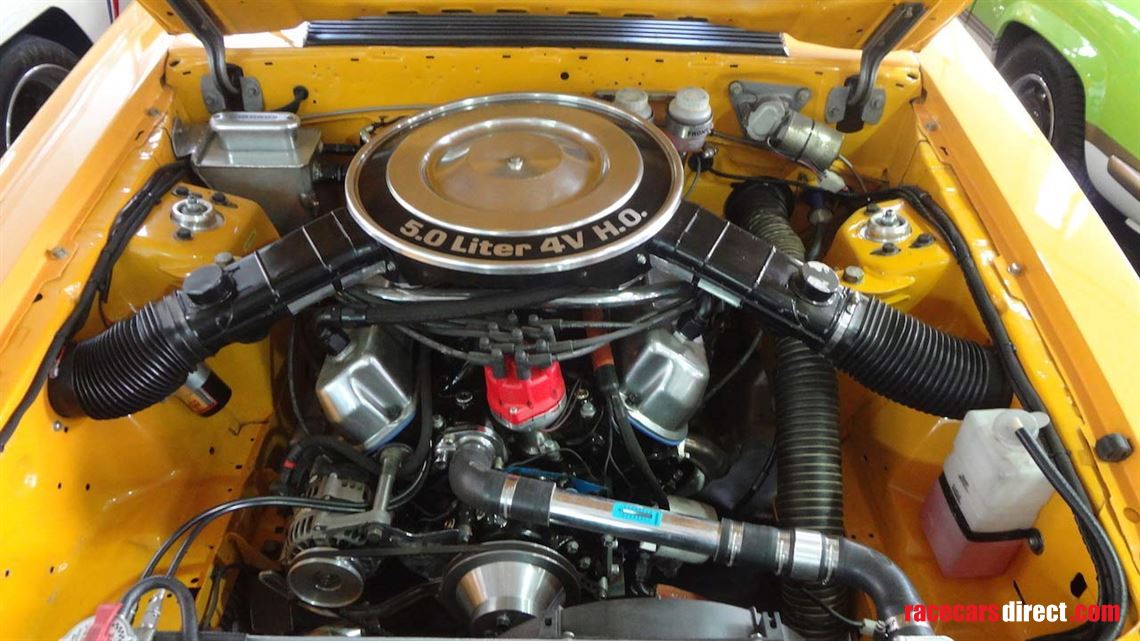 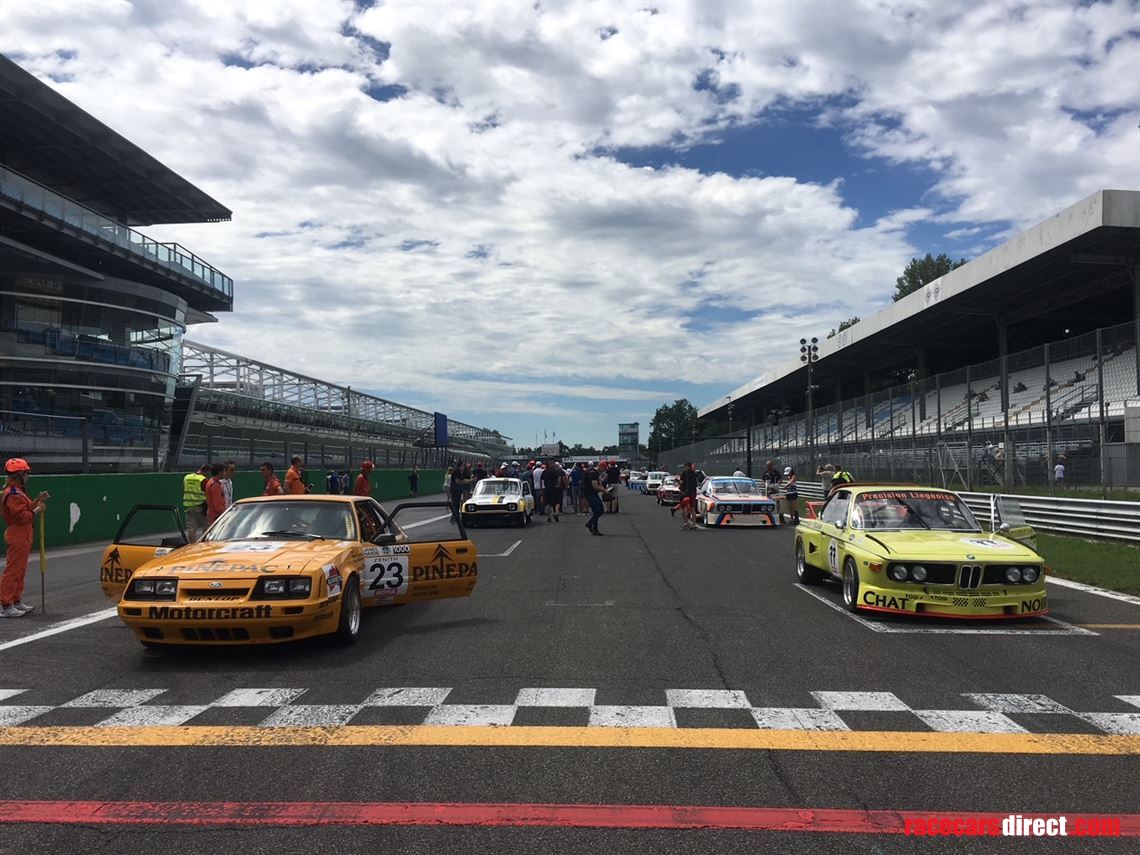 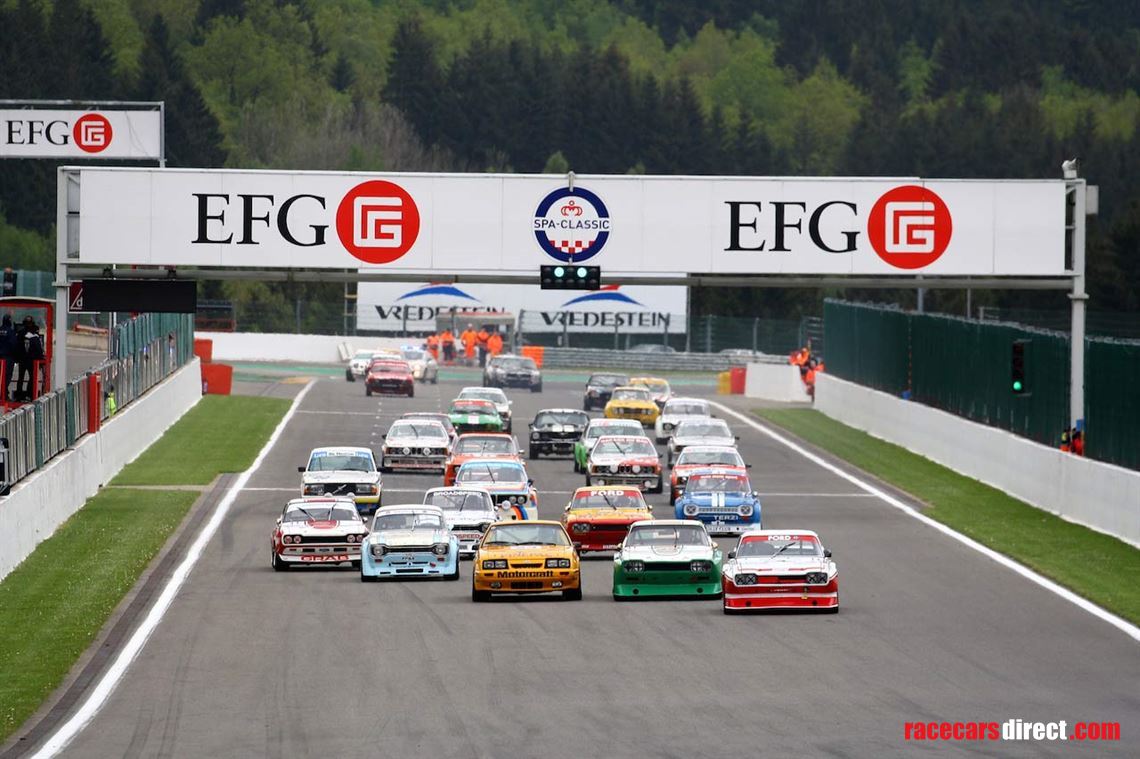 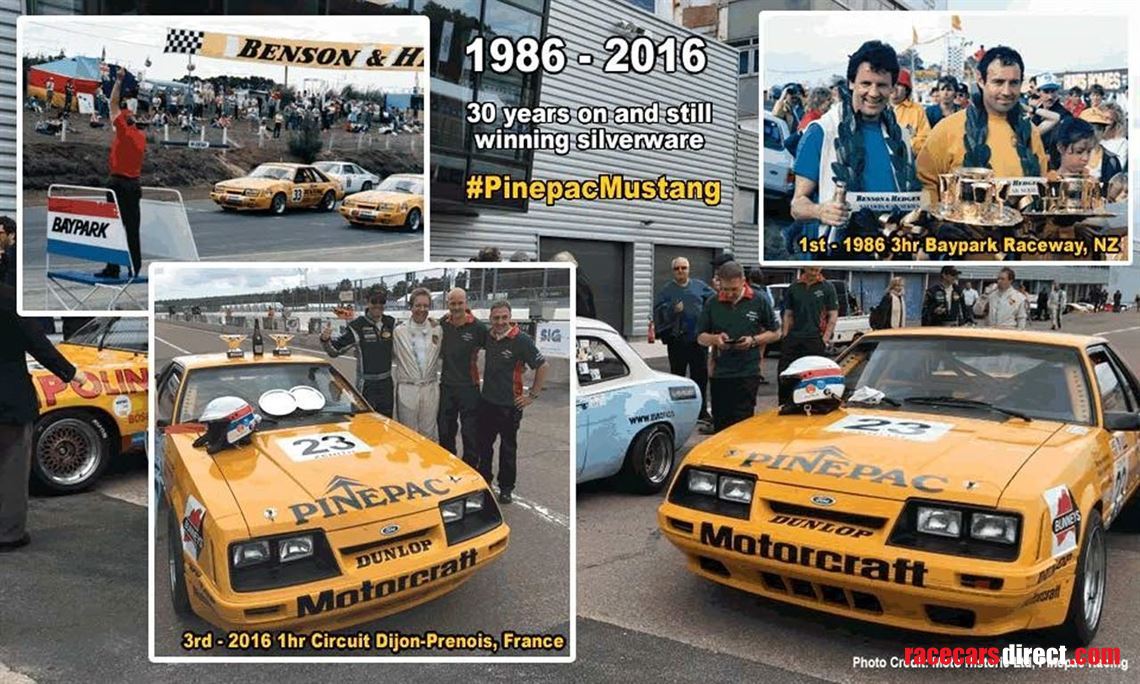 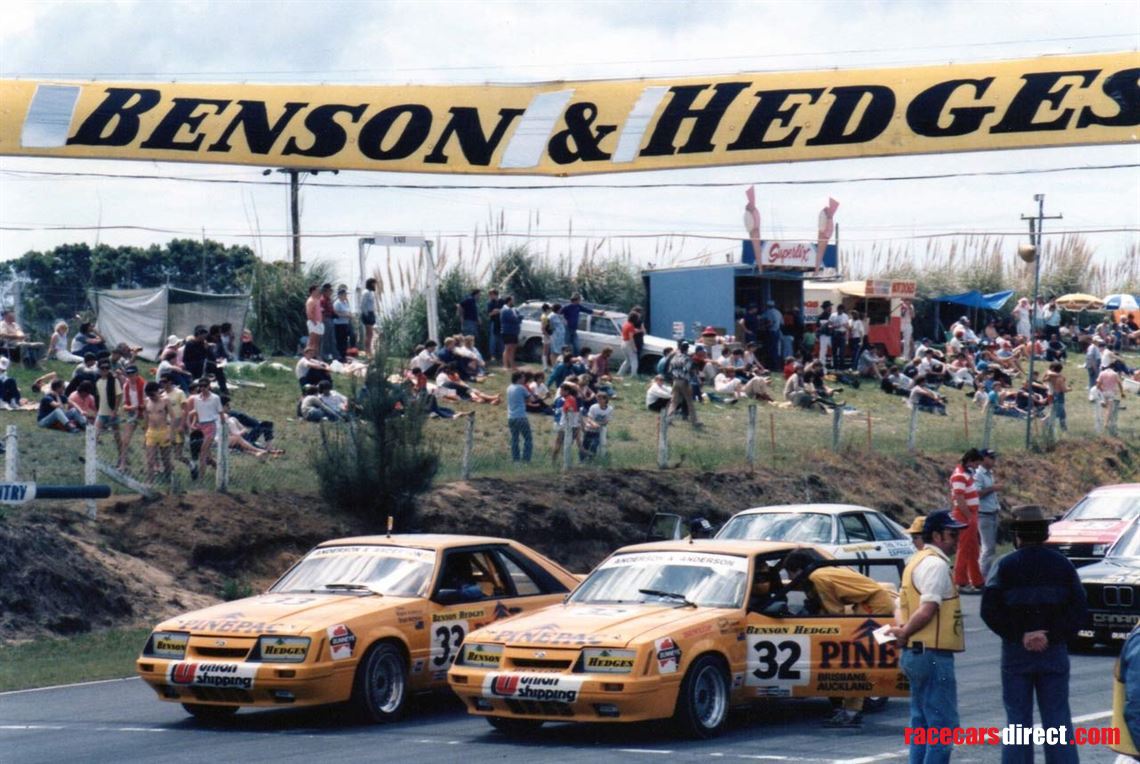 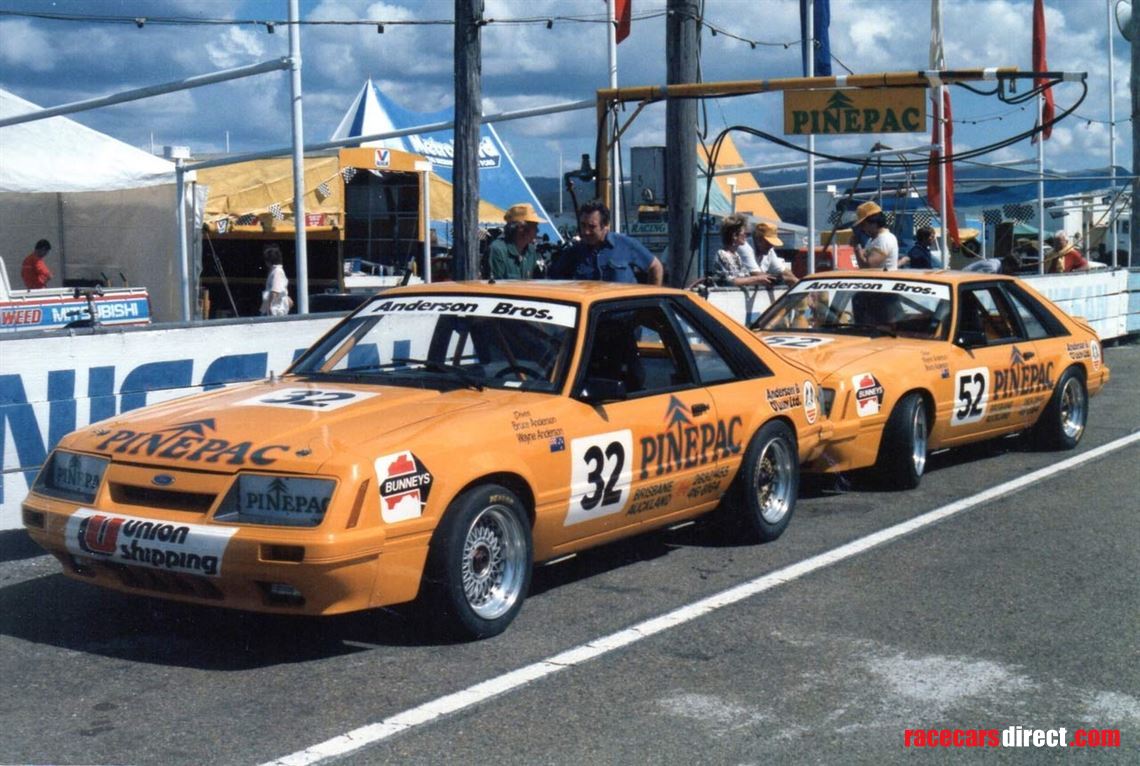 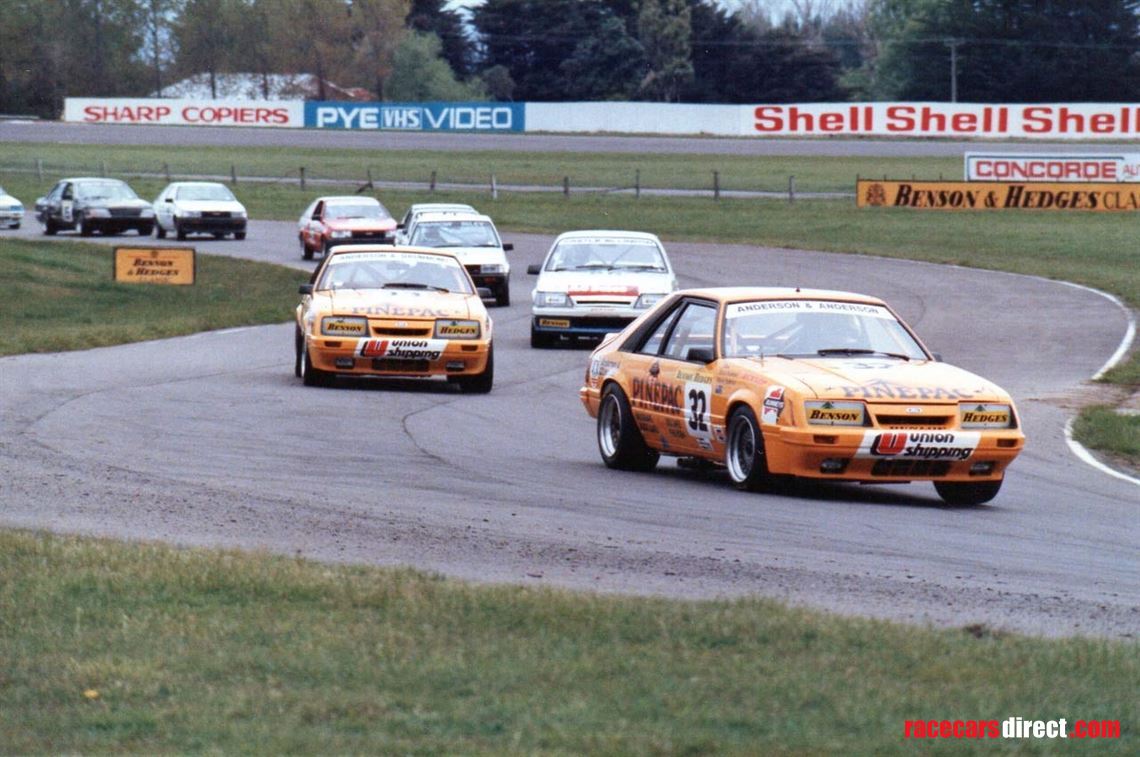 With Ford's official blessing, the Fox Body Group A Mustang was an inspired creation from the legendary race shop Zakspeed in Germany. Having had a very successful run with the Group 5 Capri, the Zakspeed team applied what they knew, to the 5 litre, compact 2+2 Mustang. Unfortunately, early Group A period weight penalties meant that the car was never going to give the car the edge it needed in Europe. The Group A cars were sold in 1984 to Australian cult hero Dick Johnson and they went onto much greater things in Australia.

When the Anderson Brothers, two very good gentlemen drivers from New-Zealand, started racing in the early 80’s, they probably didn’t expect their team, Pinepac Racing, to grow that fast, and have as much as 3 cars, battling in the NZ touring car Championship, Australian touring Car Championship as well as Bathurst.

In 1985, the touring Car Racing scene had switched to Group A regulations, and the Anderson Bros decided to buy two Fox body Mustangs from Don Smith in Sidney. The Mustang had already proved to be a serious contender at Bathurst with Dick Johnson. Don Smith raced his own Mustang at Bathurst in 1984.  The Anderson Brothers bought this car and a bare shell as well from Don. They rebuilt both cars to 1985 specs and entered the cars in various championships (ATCC, NZTCC, Bathurst and even WTCC in Wellington).

The second car, known as the Black Car, was mainly raced from 1986 by Wayne Anderson. It saw action at Surfers Paradise, Bathurst, or Nissan Mobil 500.

This is the car we offer today.

Purchased by the current owner in 2015 from New-Zealand, it was imported in UK, and fully rebuilt with no expanse spared by the experts at Moto Historics. The car was granted a new HTP in 2016 (valid until 2026), and immediately proved to be a front runner in the highly competitive Heritage Touring Cup championship by Peter auto.

The car scored many pole positions (Dijon, Spa), and podiums. It was always one of the fastest cars on track despite strong opposition from the Capri 3100 GAA and the BMW CSL.

All mechanical (engine, diff, exhaust, gearbox, etc), are new and have been rebuilt.

The fresh engine has been dynoed at 489 HP.

It is 100% ready to race with a valid HTP and has just been successfully tested.

This Pinepac Racing Mustang offers an unbeatable performance / price ratio and can easily compete with the fastest Historic Touring cars (Ford Capri, BMW CSL) which are much more expensive to buy and operate.

Street legal race car - one of only 30 built