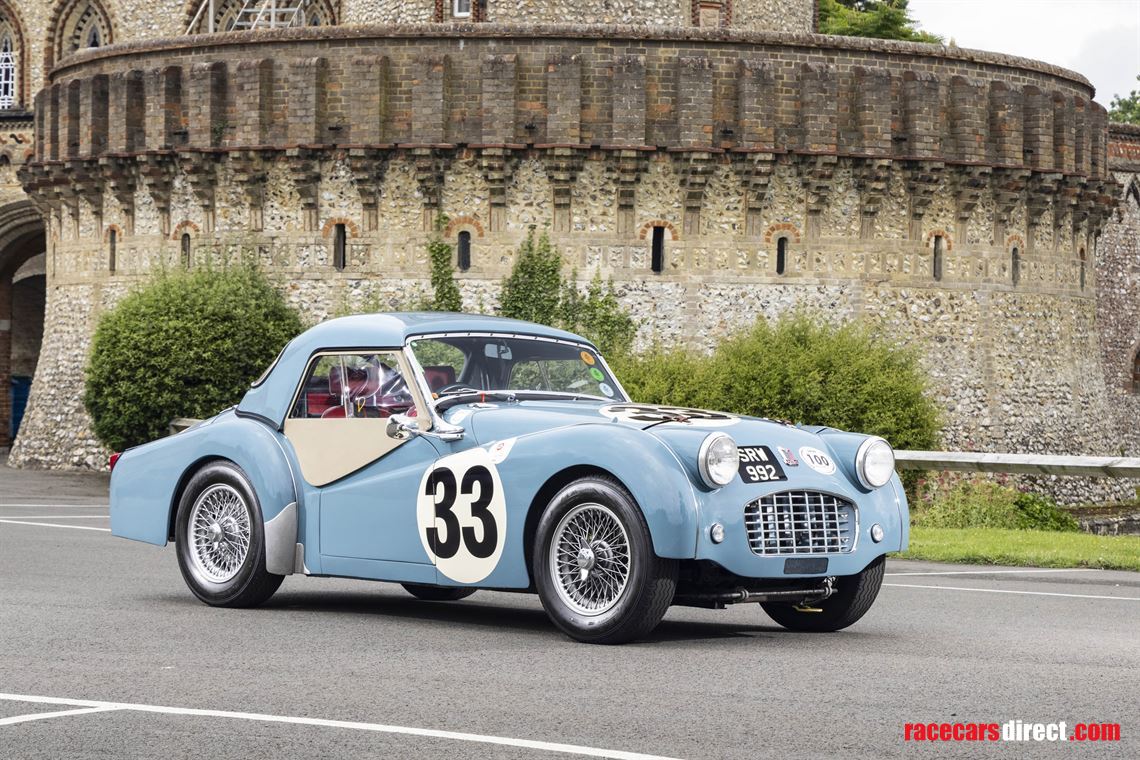 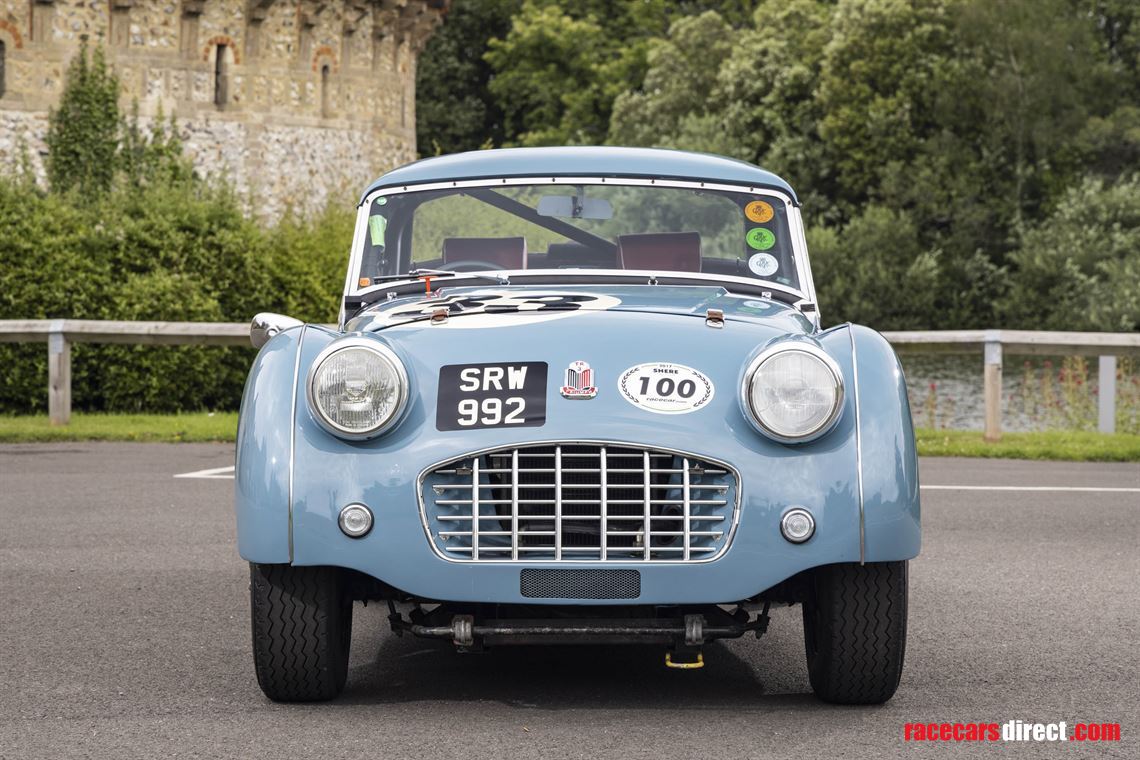 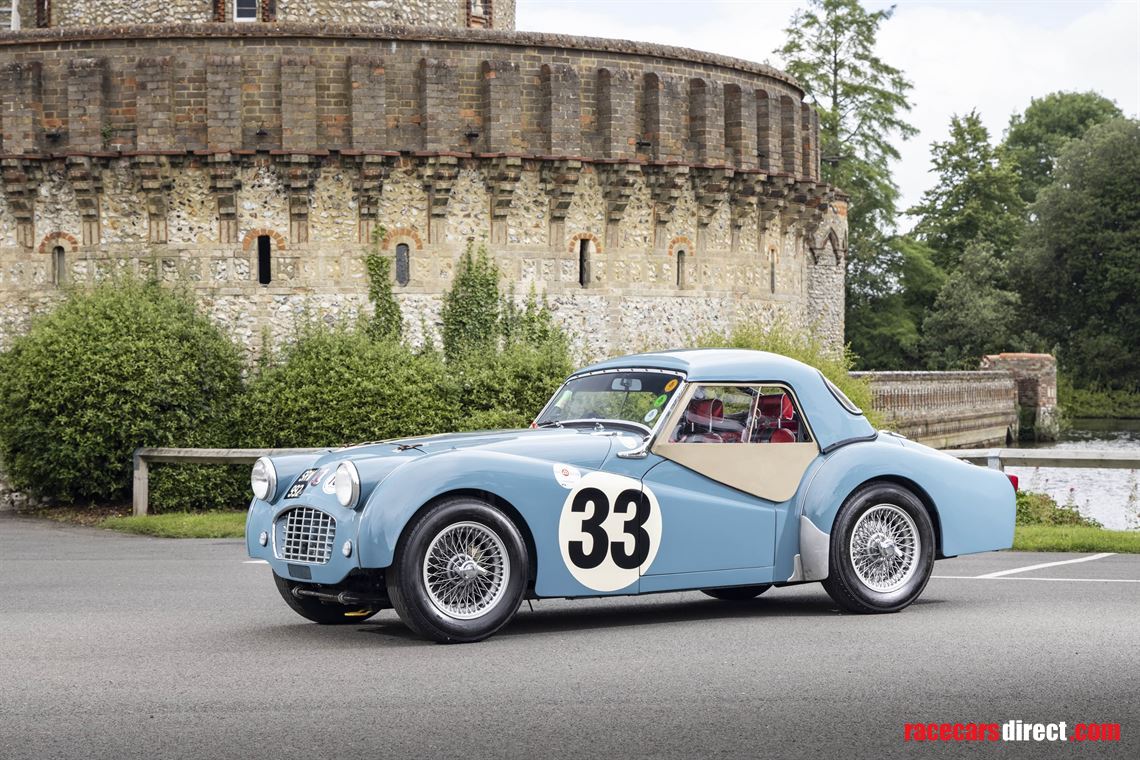 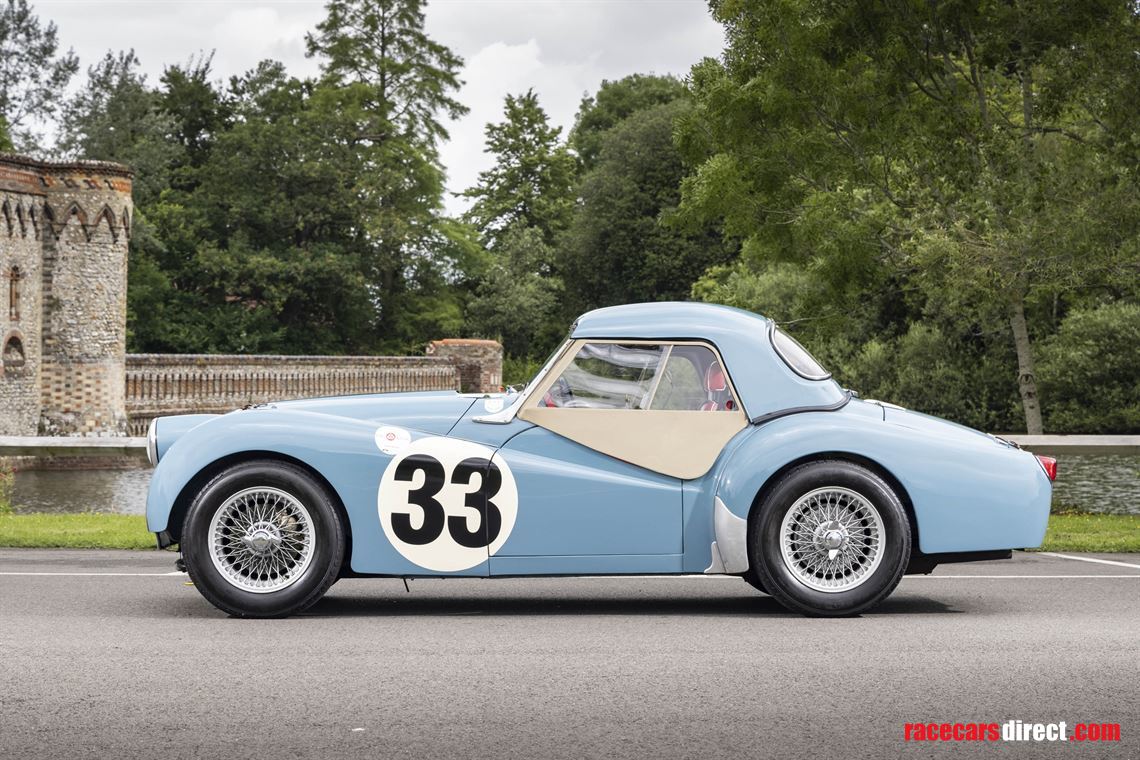 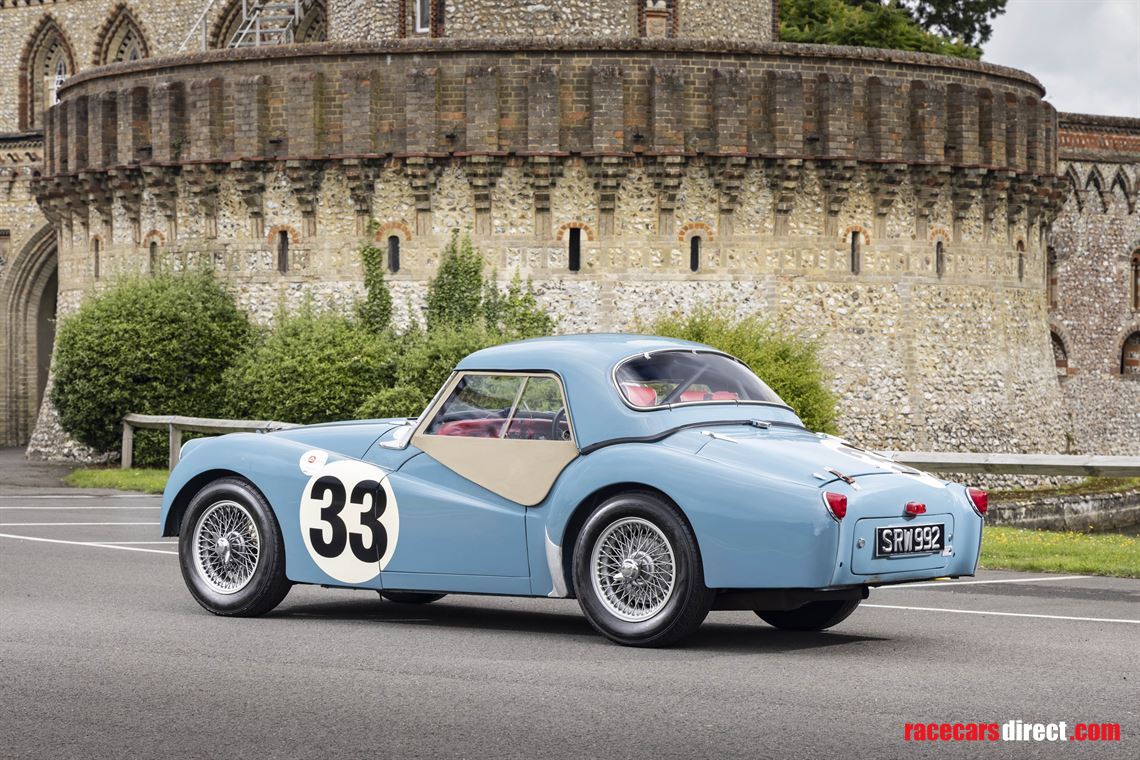 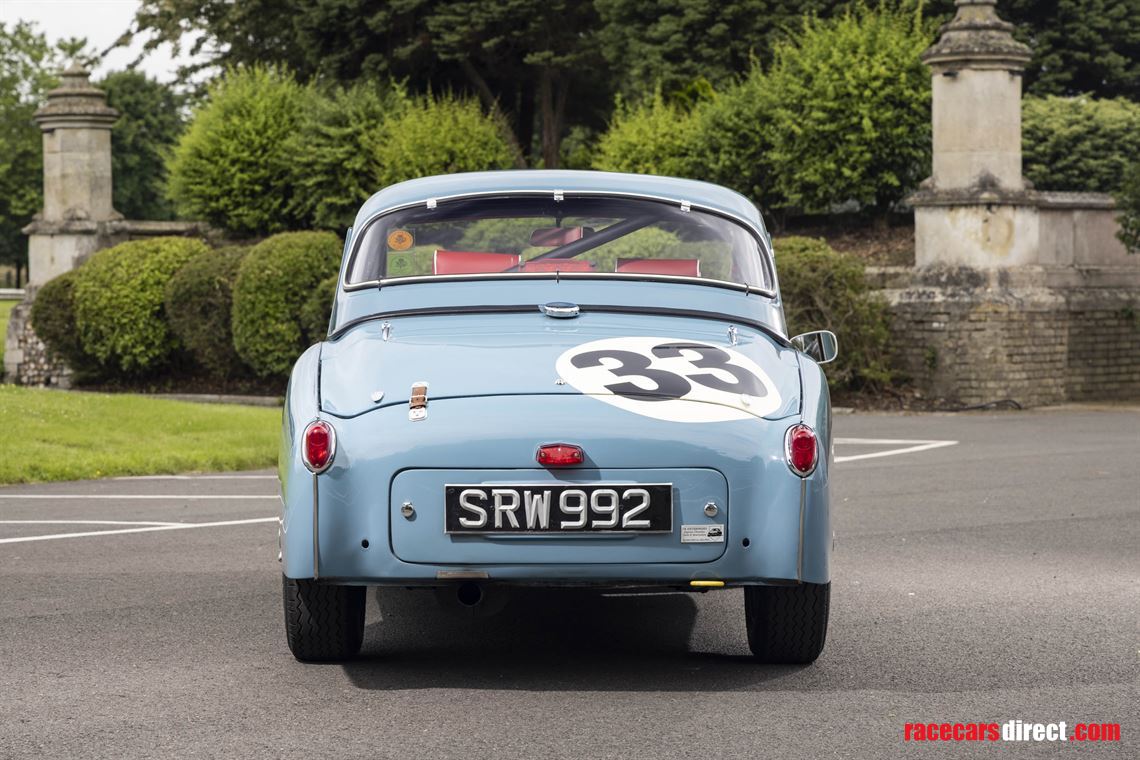 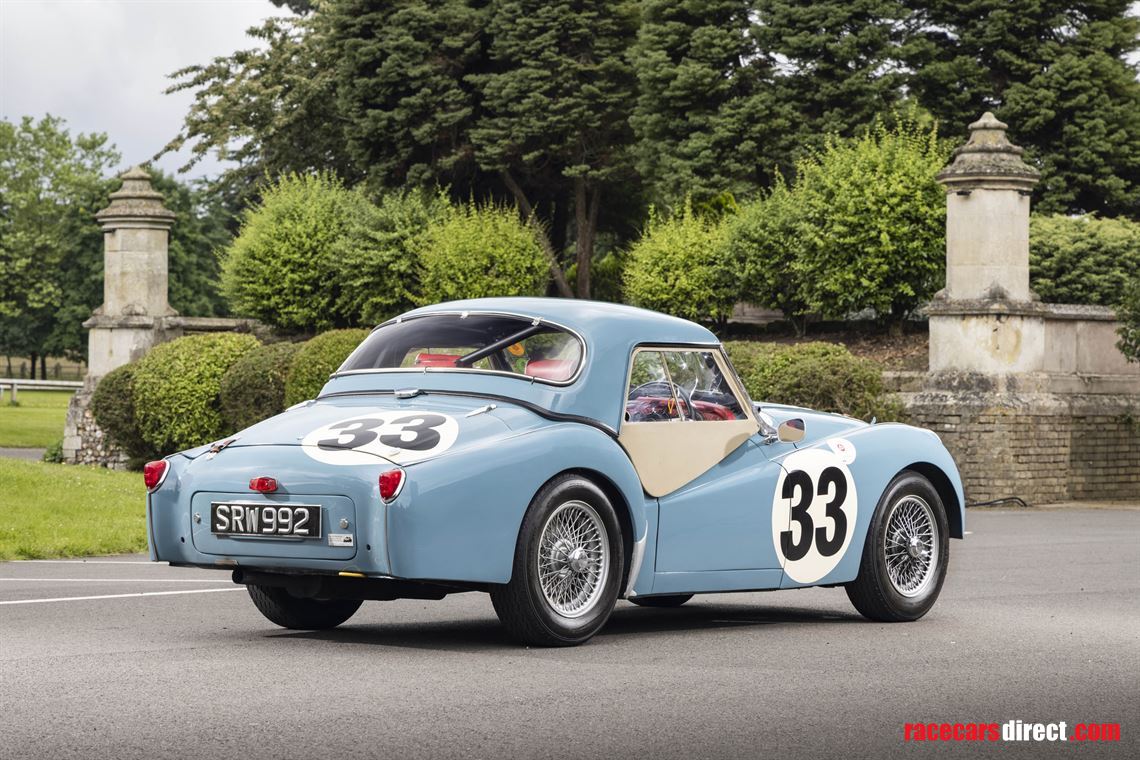 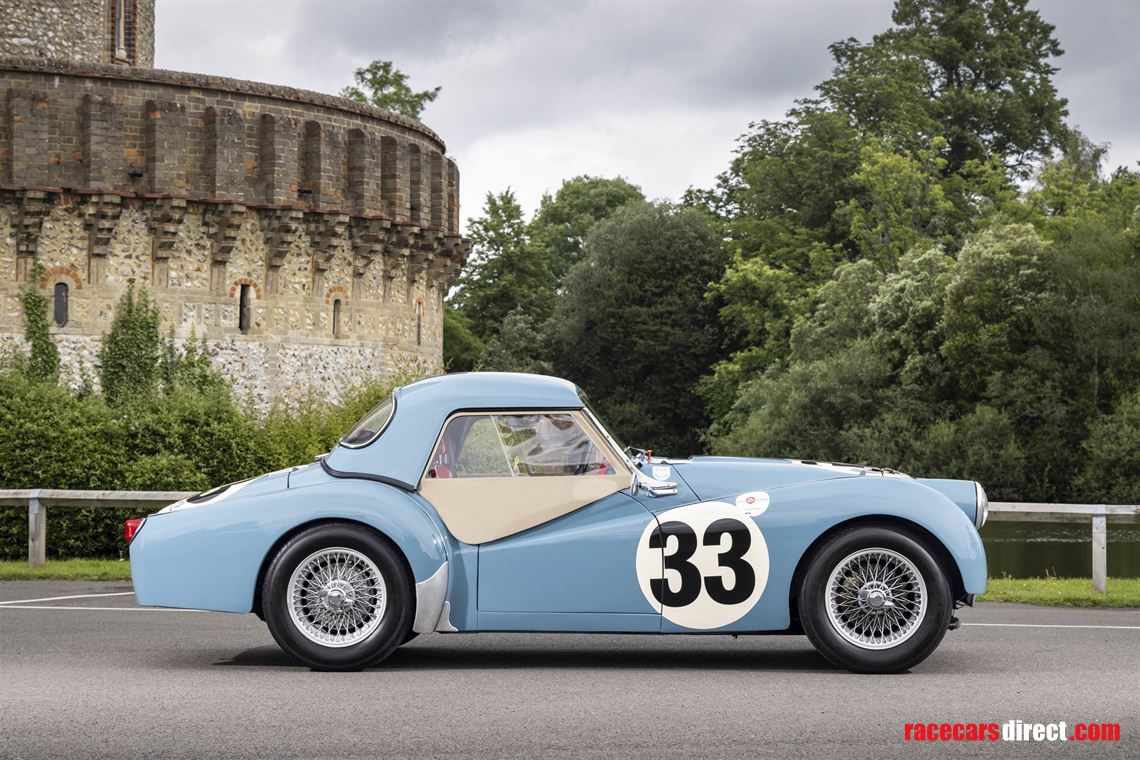 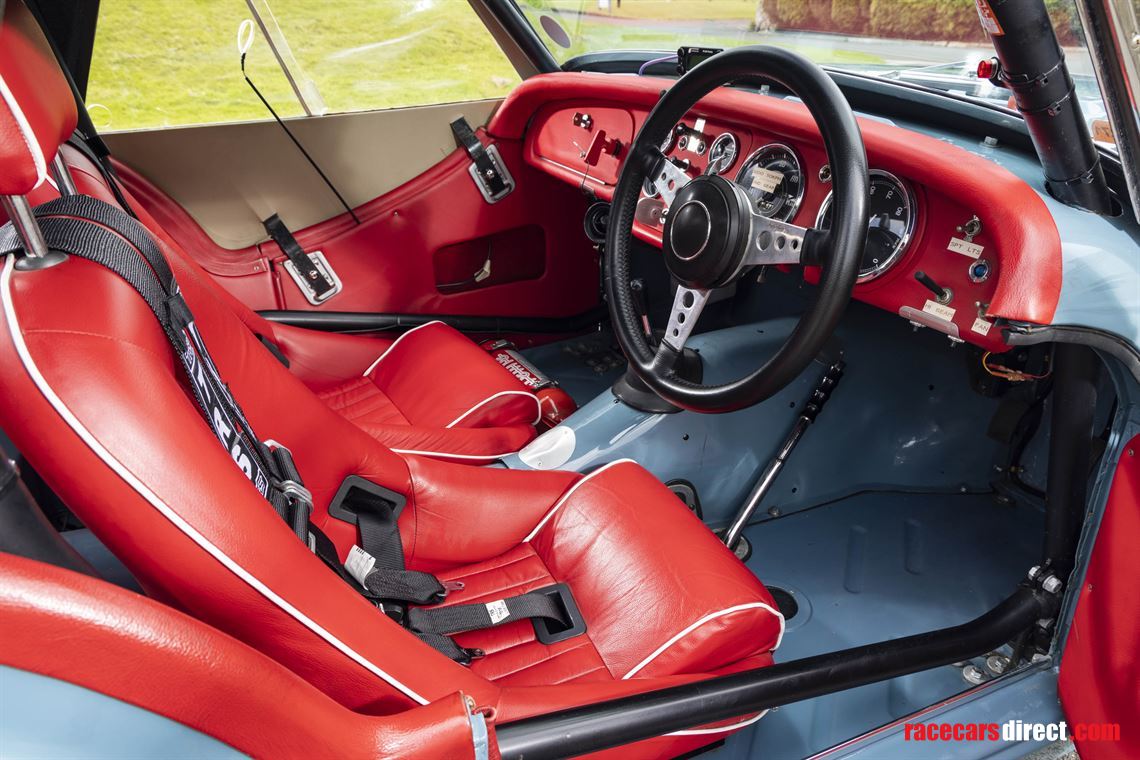 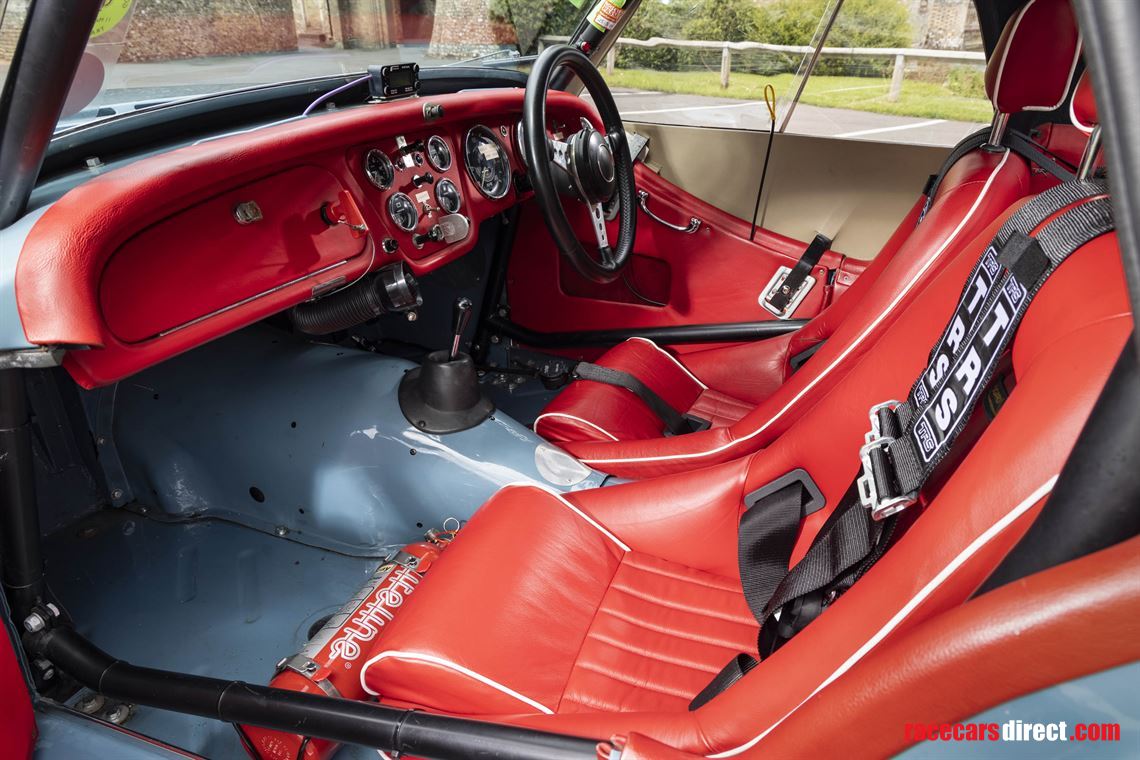 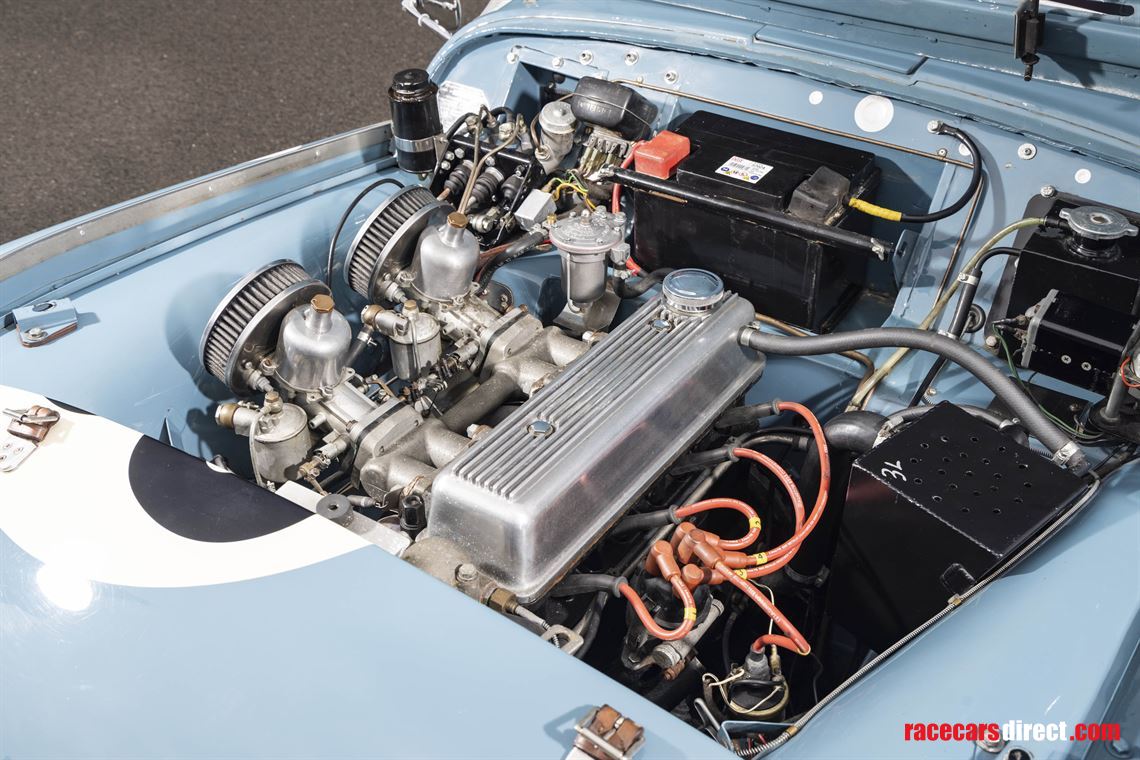 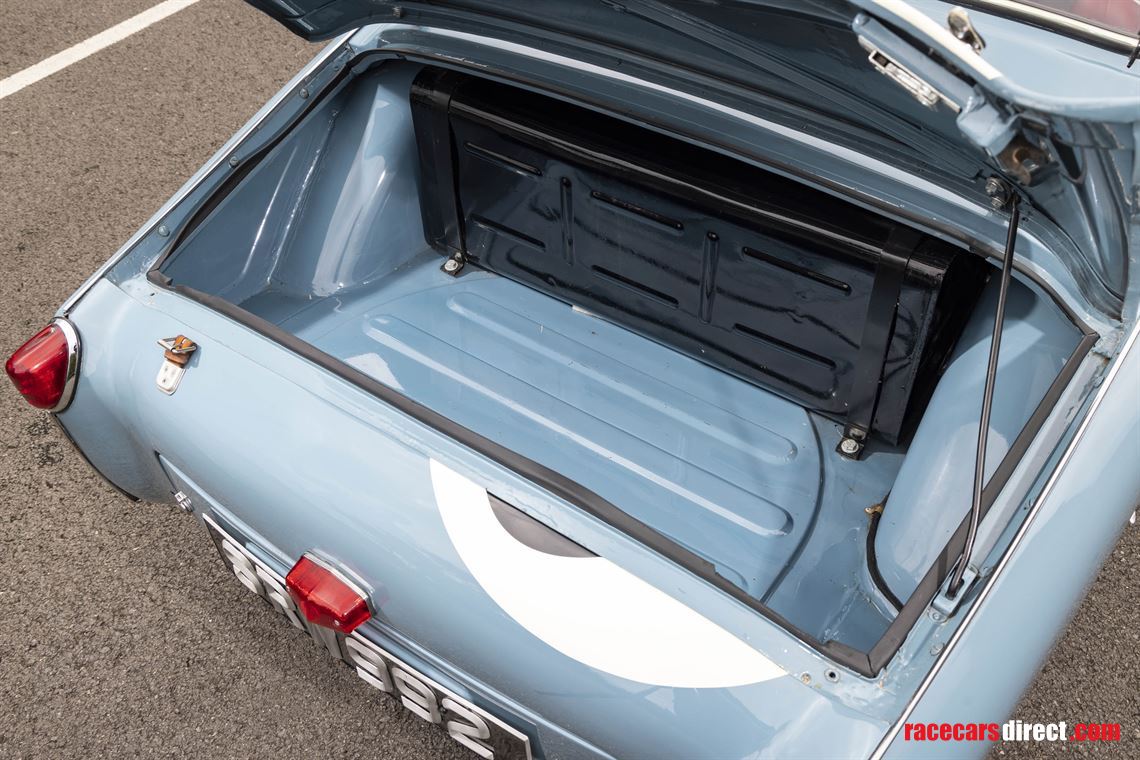 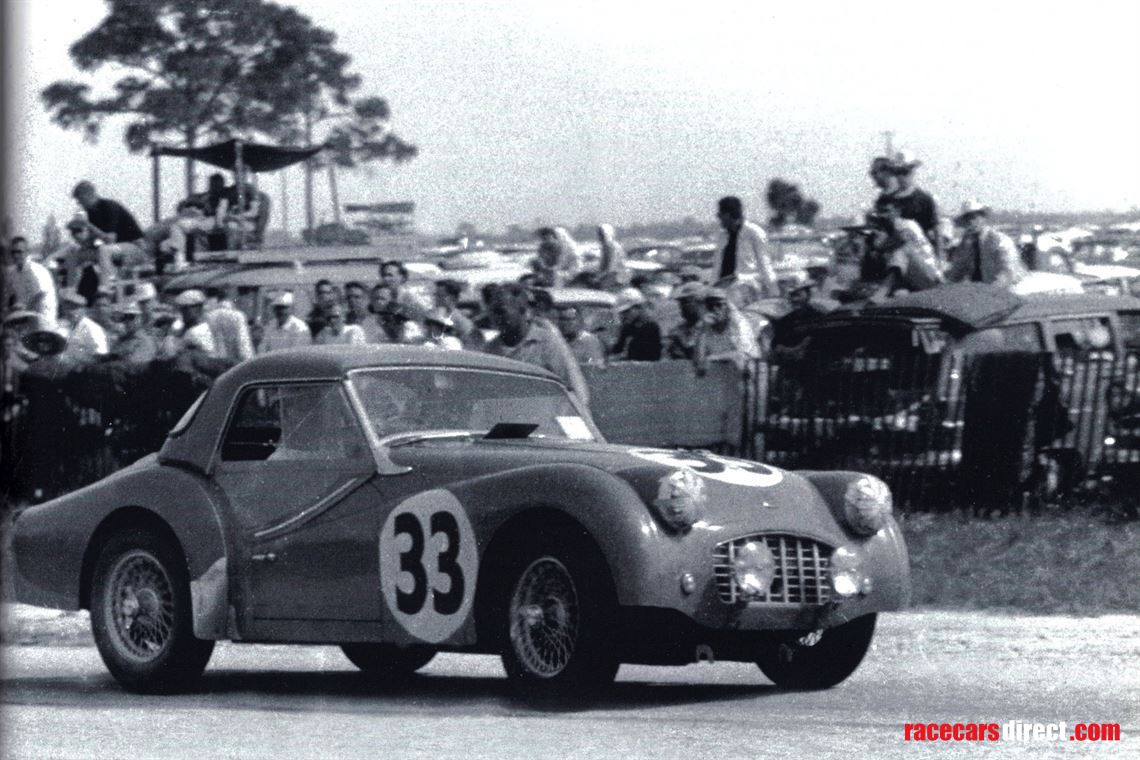 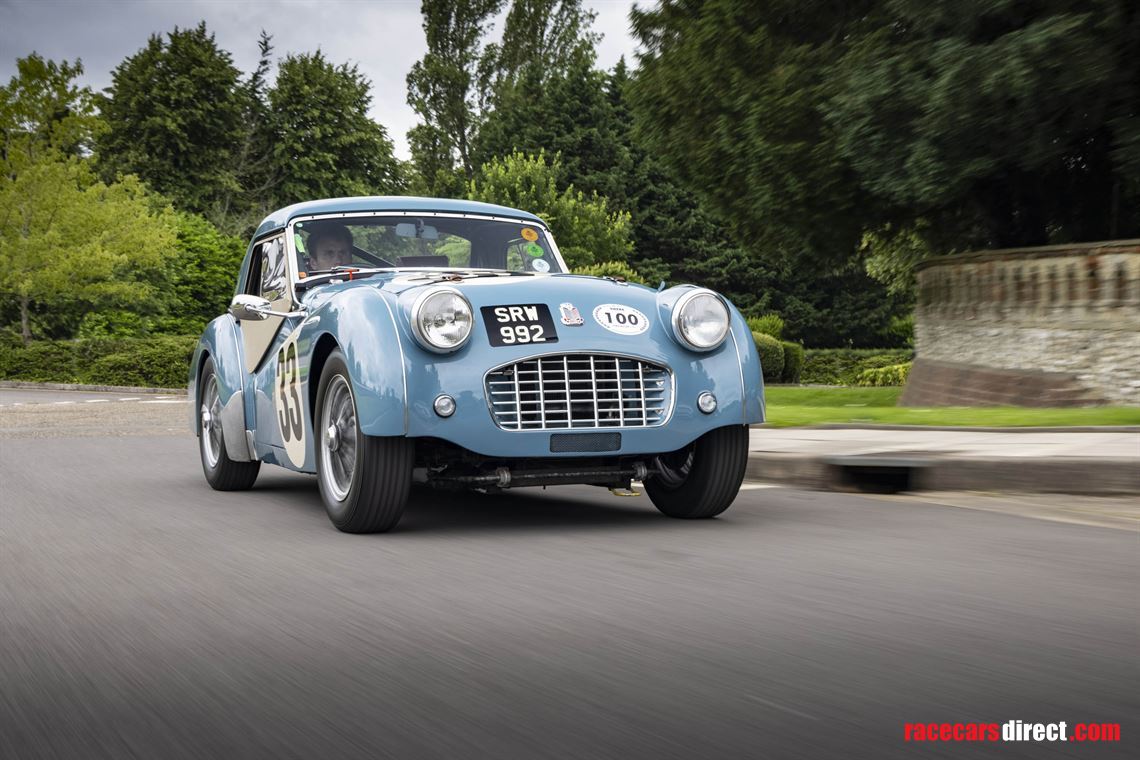 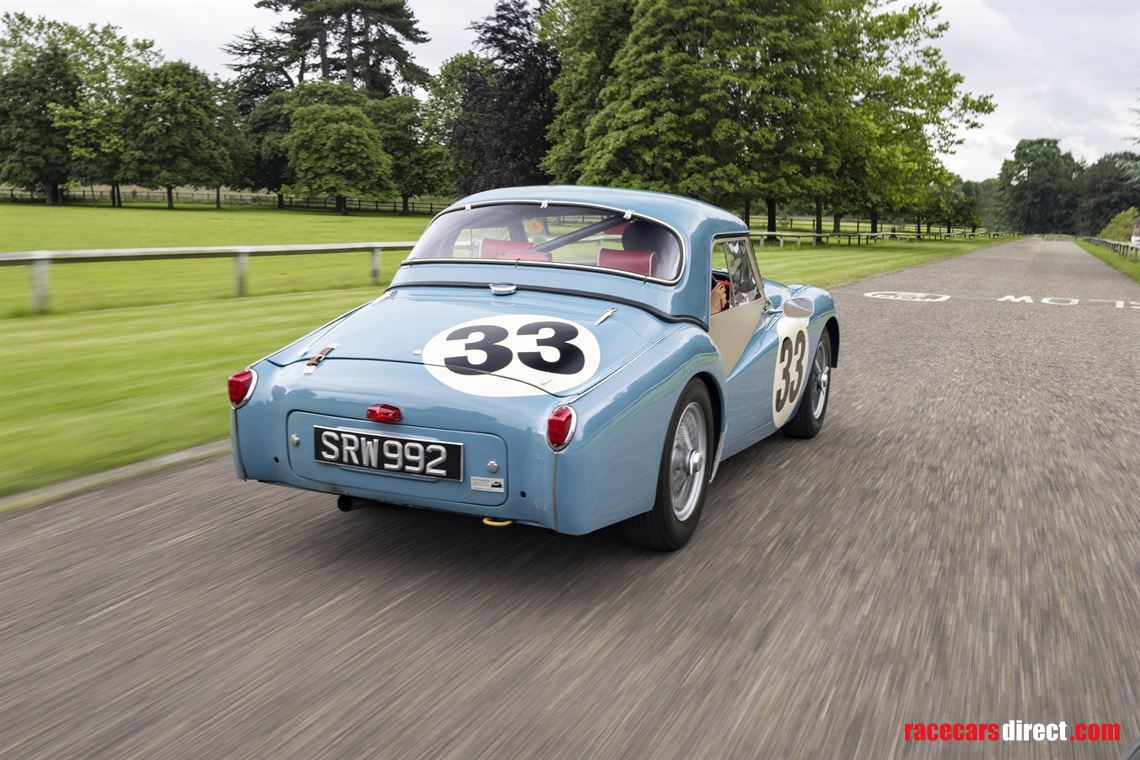 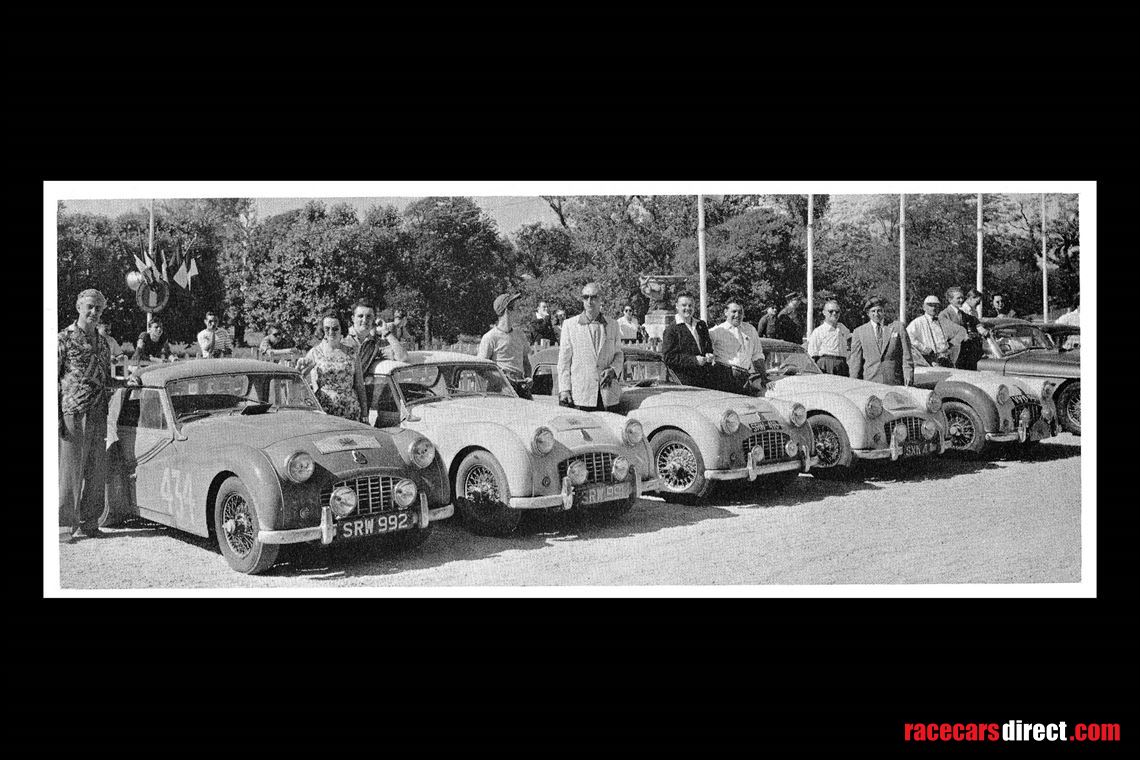 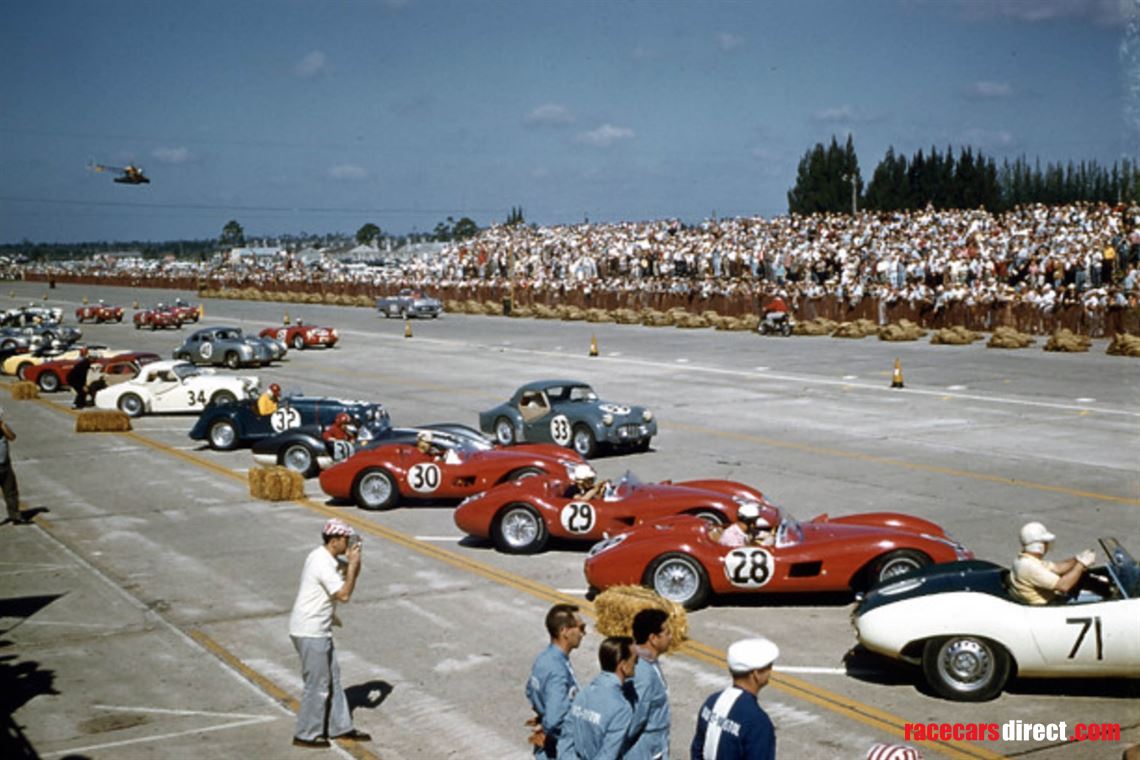 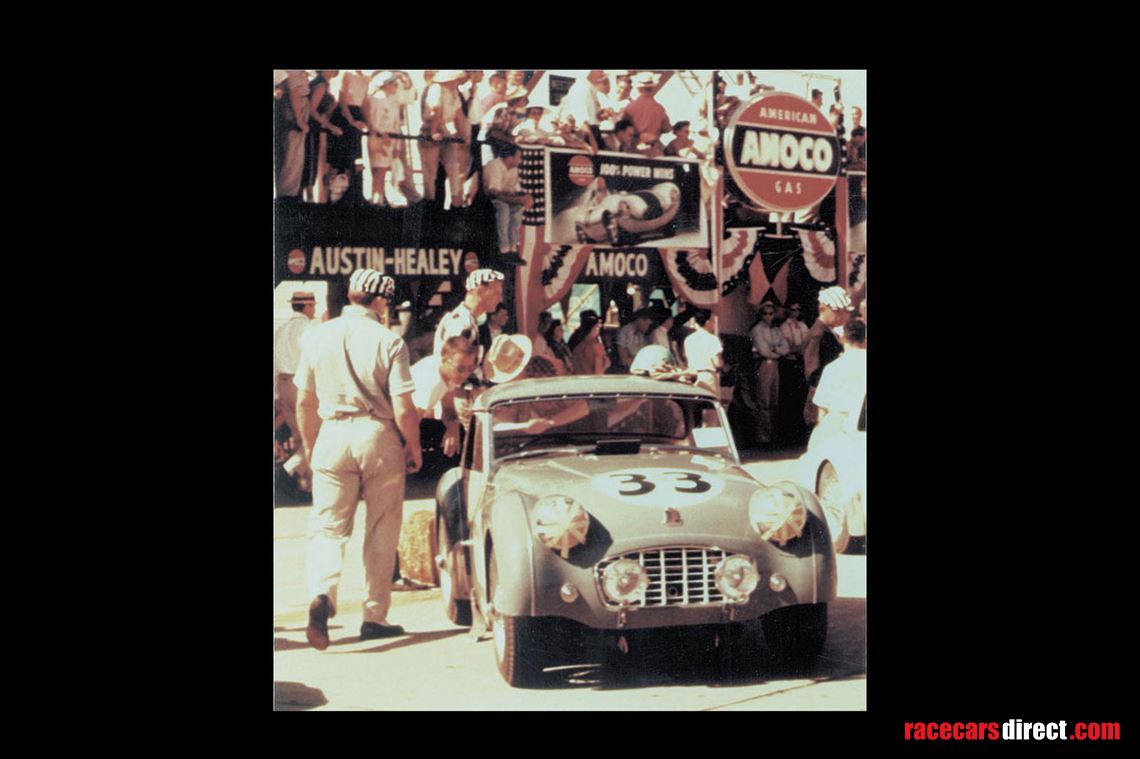 Henderson Fellowes is delighted to offer for sale the sole surviving ‘ex-works’ Triumph TR3 from the trio of cars entered for the 12 Hours of Sebring in 1957.

An extract from the production records of The Standard Motor Company Limited confirms that chassis number TS 10614 was completed on Thursday 22nd March 1956 between 9.30-10.30am no less! Painted in rare Salvador blue with a red Vynide interior and Fawn Side Curtains, the TR3 was built to the following specification;

Road registered as ‘SRW 992’, the Triumph was one of three TR3’s entered by the ‘works’ to tackle the Alpine Rally held in June of 1956. Driven by Tommy Wisdom and with his daughter Anne navigating, the pair assisted Triumph in winning the team prize as well as a much-coveted Alpine Cup.

Later in ’56, ‘SRW 992’ was again entered by the ‘works’ for French driver Annie Bosquet to compete in the Swedish event, The Rally to the Midnight Sun – with co-driver Jo Ashfield the TR3 finished 13th in class.

During the winter of 1956/57, the Triumph competition department upgraded ‘SRW 992’ to the latest disc brake specification ahead of dispatching the car to the United States of America for the sixth running of the now popular 12 Hours of Sebring. Entered as car number 33, the TR3 would be driven by Mike Rothschild and Robert Johns (initially the car was slated to be driven by R.E. (Bob) Drake & Ken Richardson). ‘SRW 992’ would form part of a trio of TR3’s entered by Triumph along with sister cars ‘SRW 991’ (car number 34) painted white and ‘SRW 410’ (car number 70) painted cream with a red roof. There are numerous photos of the trio lined up before the race contained in the TR3 book by Frederic Reydellet (a copy accompanies the car). Rothschild and Johns finished the race very credibly with a second place in class GT2.0.

Following the success at Sebring, all three cars were shipped back to England and sold off. ‘SRW 992’ would then enter new ownership and was used in competition and as a road car before passing into the hands of a Triumph enthusiast in South Yorkshire. In 1996, TR Historian Bill Piggott was visiting Yorkshire to look at a TR3A for sale and parked next to it was ‘SRW 992’. Needless to say, Piggott left with ‘SRW 992’ rather than the ‘3A. Requiring a full rebuild, Piggott chose to return the TR3 to the same spec in which it completed the Alpine Rally in ’56. Piggott used ‘SRW 992’ until 2006 when he sold the car to the current owner who had been looking for something with either a race or rally history.

The new owner had a desire to race ‘SRW 992’ and so decided to re-install the front disc brake set-up as it had raced at Sebring in ’57. Respected Triumph preparers TR Enterprises of Nottingham were entrusted to do the work and the engine was improved at this time to incorporate an uprated camshaft, gas-flowed cylinder head, steel crank and forged pistons. Further improvements included an uprated competition clutch, a straight-cut gearbox, overdrive and lightweight aluminium panels.

In 2010 following these improvements, ‘SRW 992’ was entered for Plateau 3 at Le Mans Classic – a personal highlight for the owner. Other notable race meetings that ‘SRW 992’ has entered include the Goodwood Revival, Goodwood Members Meeting and victory at the Grand Prix Historique de Bressuire.

Offered today in ‘Sebring ‘57’ specification, ‘SRW 992’ is an enticing opportunity to enter a myriad of historic rallies and race meetings.