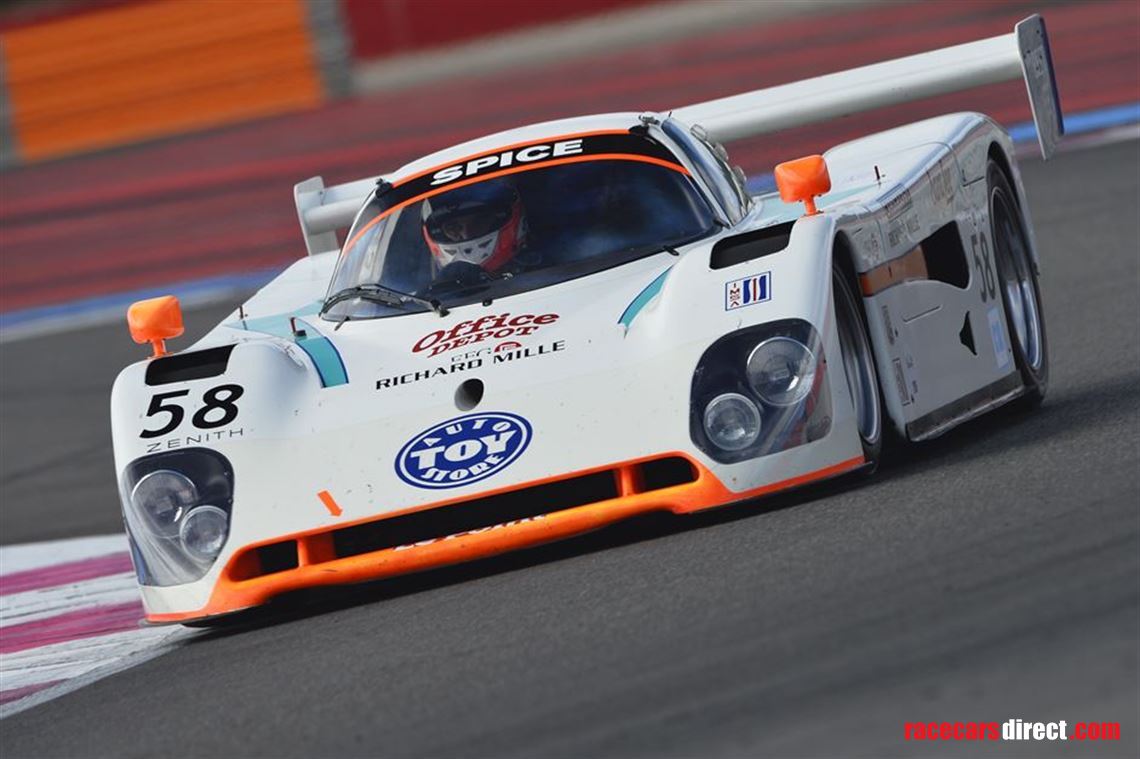 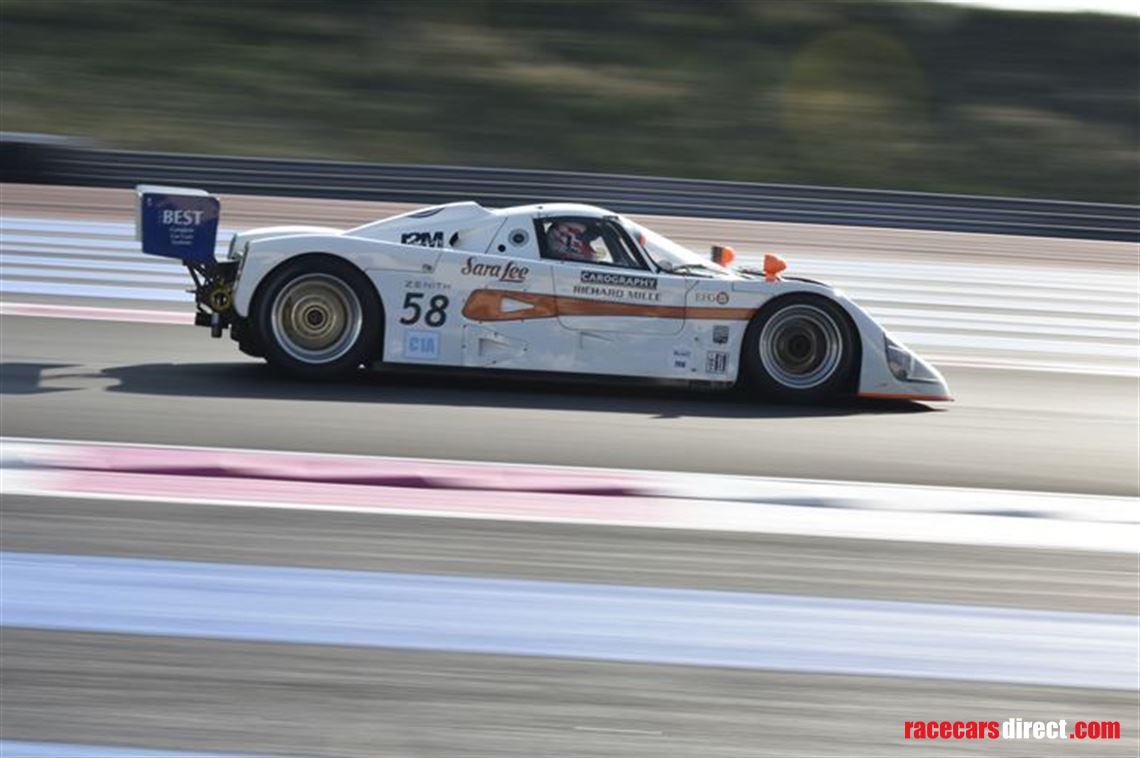 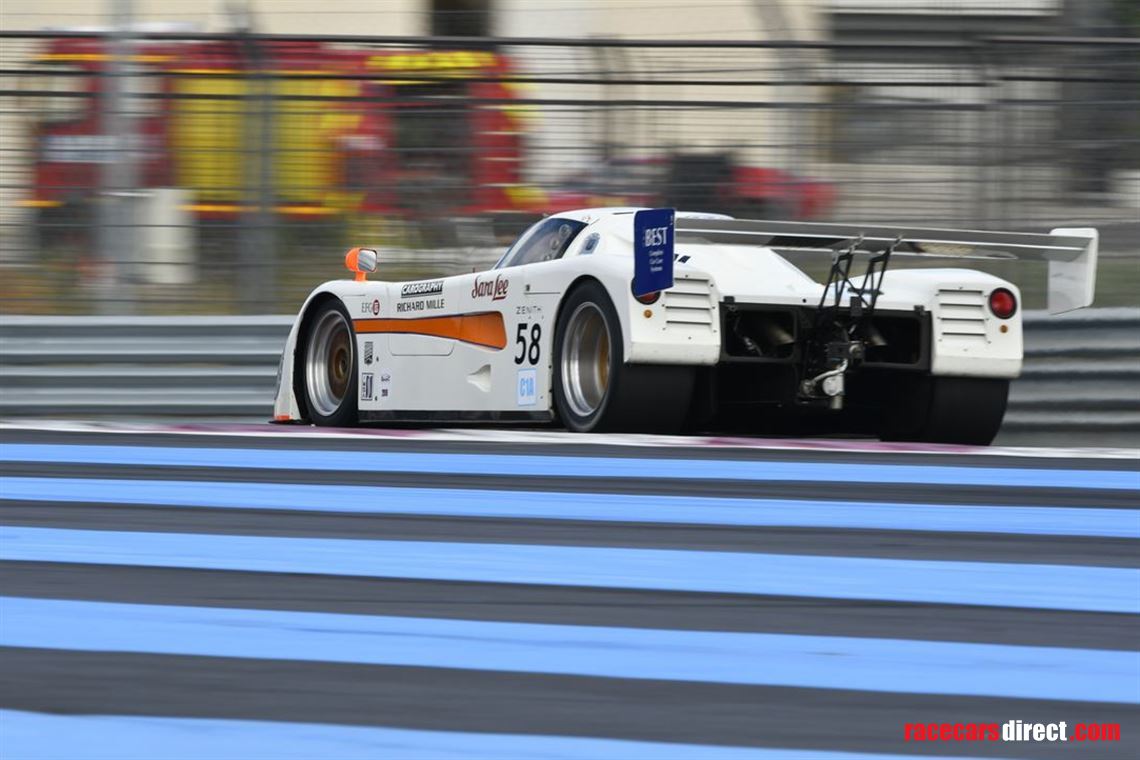 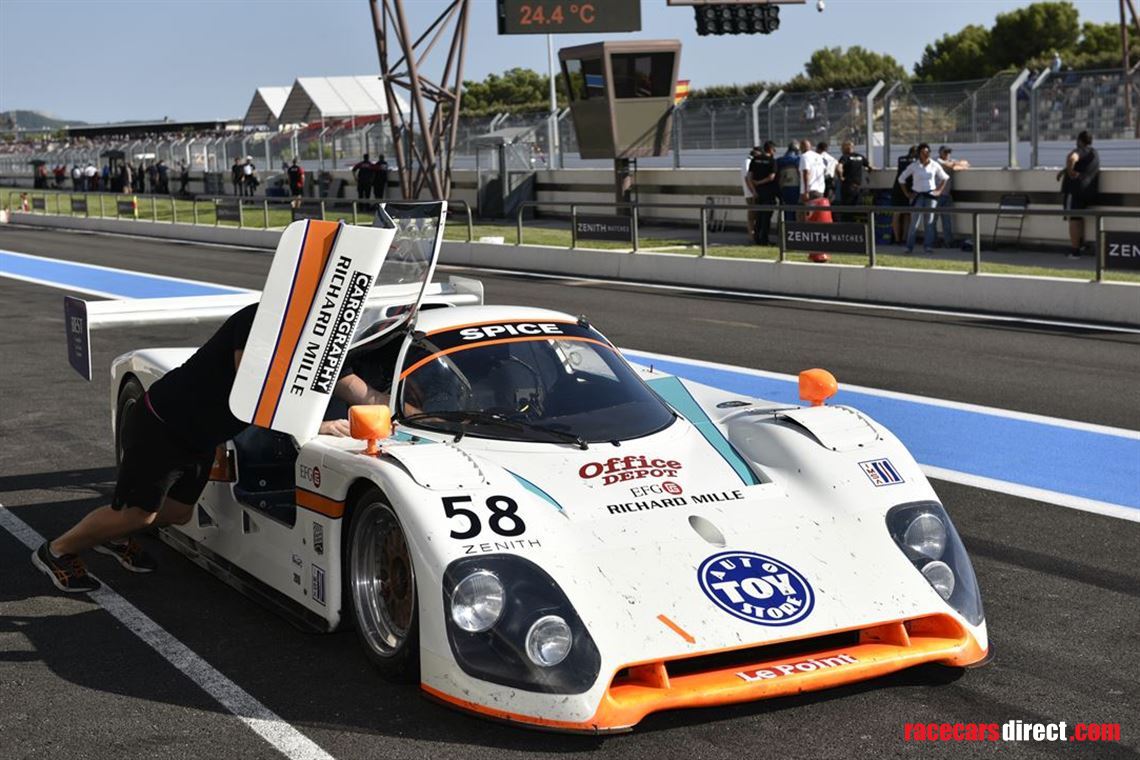 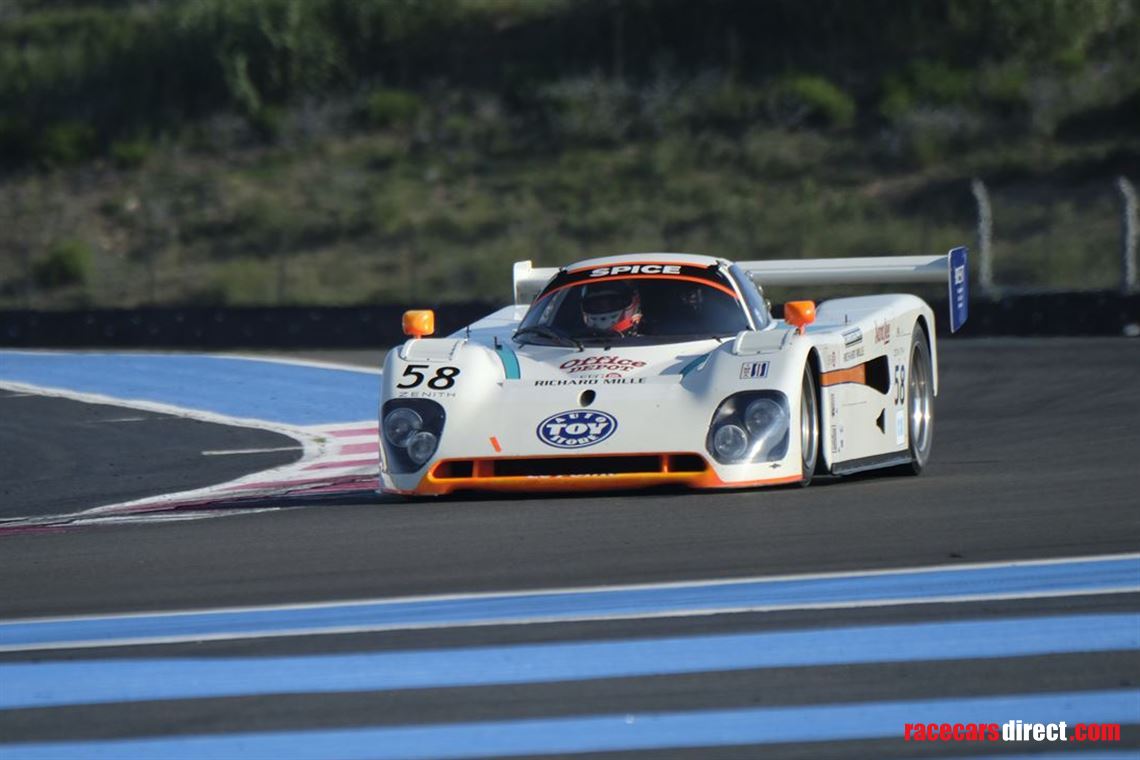 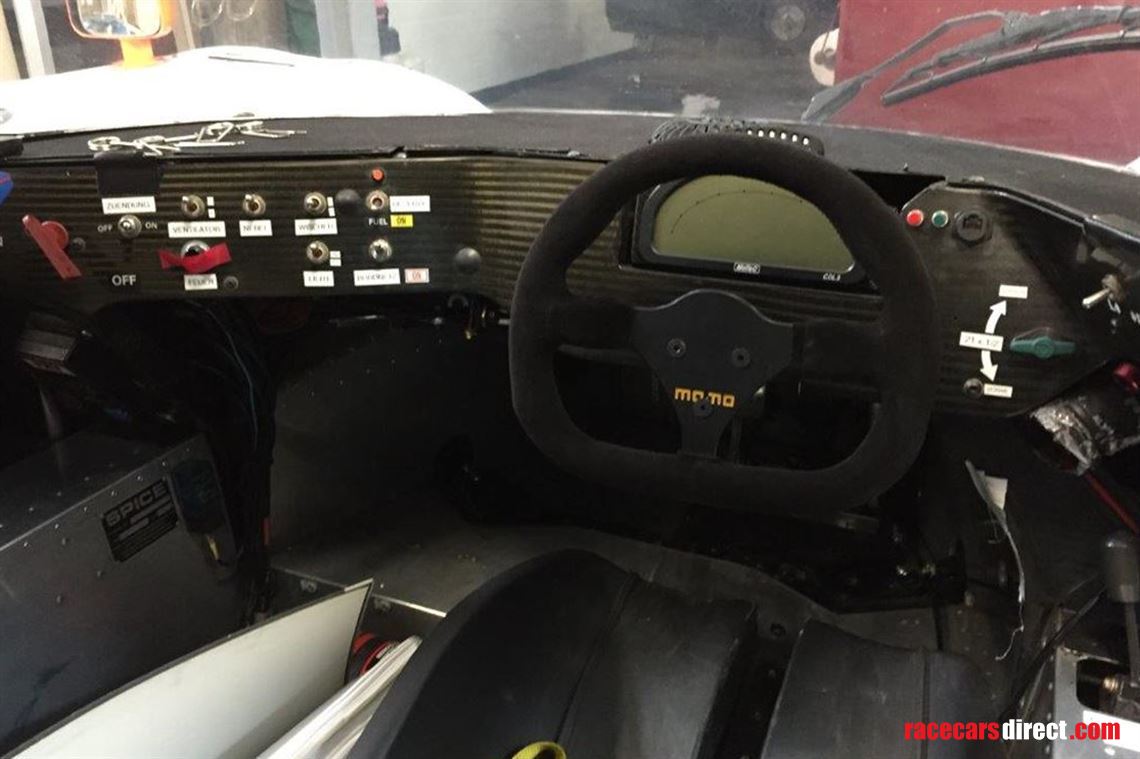 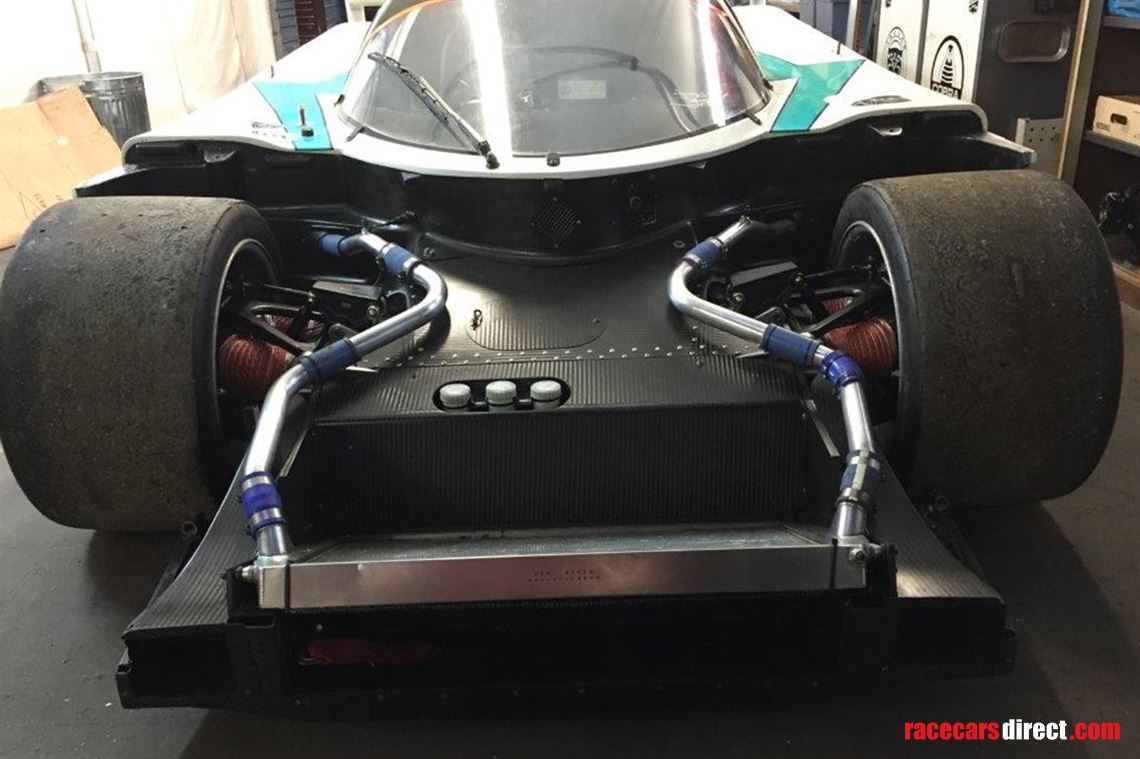 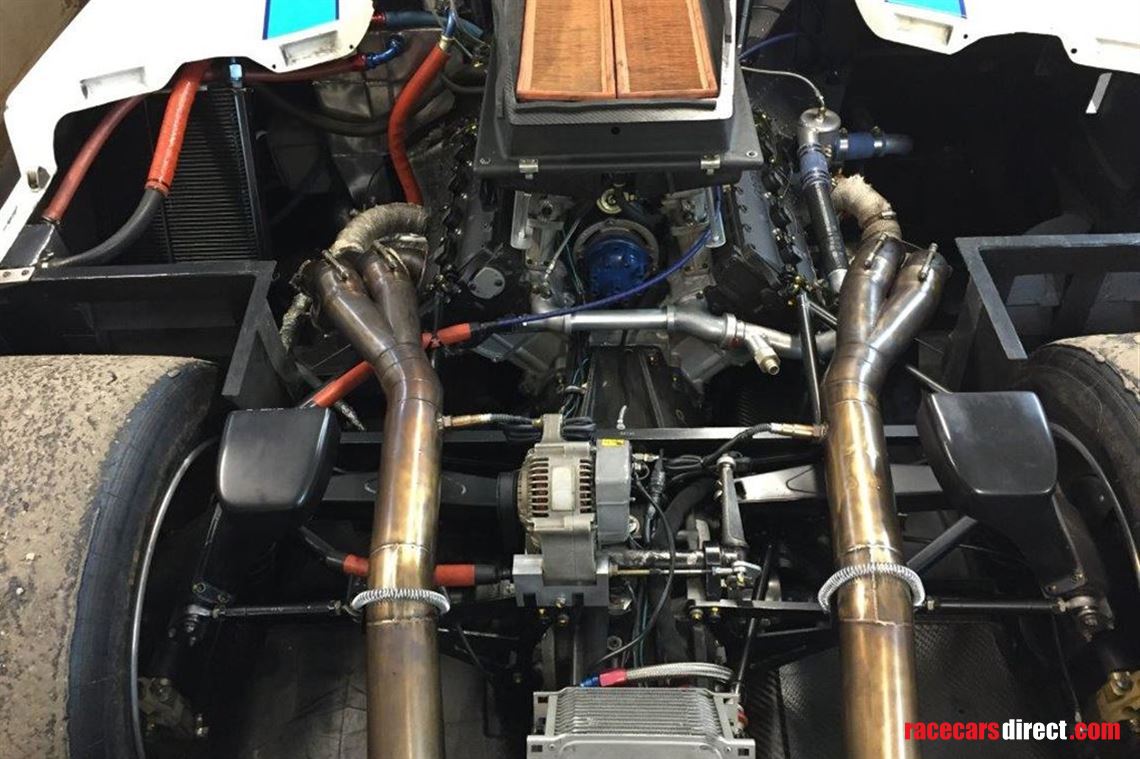 The Spice SE90C-020 is a worthy representative of the manufacturer Spice Engineering, which has particularly distinguished itself during the World Sports Car Championship in 1991, against cars from very sophisticated manufacturers and meeting the new regulations.

​Designed by Graham Humphrey, the Spice SE90 was intended for the World Sports Car Championship, and more particularly for the 1990 season. Like the previous versions produced by Spice Engineering, the SE90 was offered to customer teams in two versions. The SE90C to meet the rules of the C1 and C2 categories of the World Sports Car Championship, or the SE90P version, designed for the IMSA championship and the GTP and GTP Light categories. The SE90 is one of the most powerful and outstanding cars of the Spice epic, its different versions have won several championships.

A semi-official car run by the Euro Racing Team

The chassis SE90C-20 is a SE90C version, which started its career... in 1991! Many private teams chose to keep the solid base of the SE90, while the world of endurance was in transition. It is the case of the Euro Racing team, which will engage two Spice SE90C in 1991, the no22 and the no20 now offered for sale. Both cars will participate in the 24 Hours of Le Mans in 1991. Flying the Dutch flag (hence the colors of the flag as decoration), the team receives financial support from Japan, with the jeans brand Osu Wada. Euro Racing has in 1991 a status of "semi-official" team of the Spice brand. Indeed, Jeff Hazell, the director of Spice, was involved and present alongside Mike Franklin, the team-manger of the Euro Racing team, and the regular drivers Charles Zwolsman and Cor Euser. Proof that this SE90C of the Euro Racing team had a special status, it benefited from the latest evolutions found by Graham Humfrys, Spice's designer, to whom we owe all the models of the manufacturer since the SE86C.

At the Nurbürgring Sports Car World Championship round, the #20 Spice took 7th place behind an armada of Jaguar XJR14, Peugeot 905 and Mercedes C291. It will not see the finish line due to an engine failure.
During the round taking place at Magny-Cours, two Peugeot 905s won followed by a Jaguar XJR14 and our Spice SE90C-020 which is thus classified at the fourth position, a true exploit.
The next race of the World Car Championship was held in Mexico City, where our Spice SE90C-020 once again finished at the foot of the podium. Two Peugeot 905s won again, this time followed by the Porsche 962 C of Team Salamin. The Spice thus showed remarkable efficiency.
The final round of the Championship will be held at Autopolis, where the Cor Euser / Charles Zwolsman double will once again outperform. Finishing in 7th position, our Spice accomplishes the feat of being the best placed car of the old generation (C1). Victory went to the Sauber C291, followed by two Jaguar XJR14s, a Peugeot 905, a Mercedes C291, a Toyota TS010, carbon-shell cars with engines that meet the new regulations aimed at banning turbocharged engines, and so on.
The Spice 020 was then sold in the United States and entered in 1993 in the 1 hour 45 minute race in Miami where it was sporting a new livery in the colors of the sponsor Auto Toy Store, which it still wears today.

It is offered for sale with a 3.5-litre DFR engine overhauled by G. Richardson. The gearbox has also been overhauled and a new bevel gearbox has been installed. Maintained by a well-know workshop, it is sold with its recent invoice file and an interesting set of parts. It can be viewed by appointment at Ascott Collection.