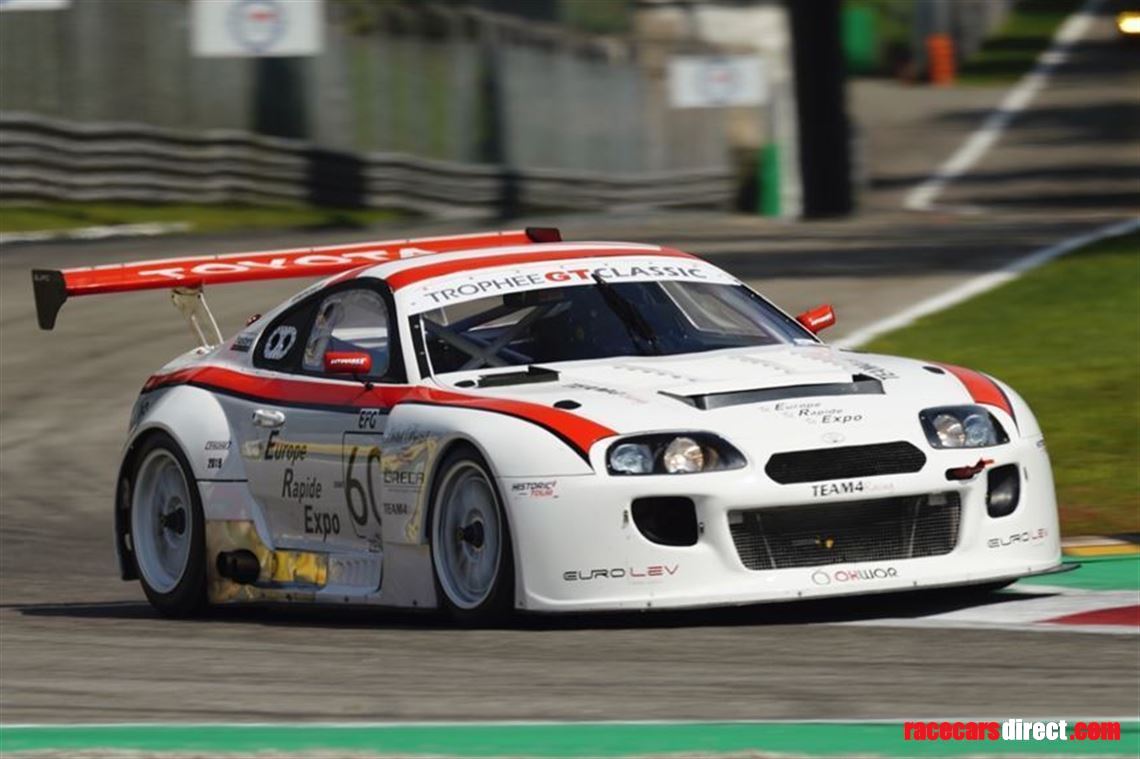 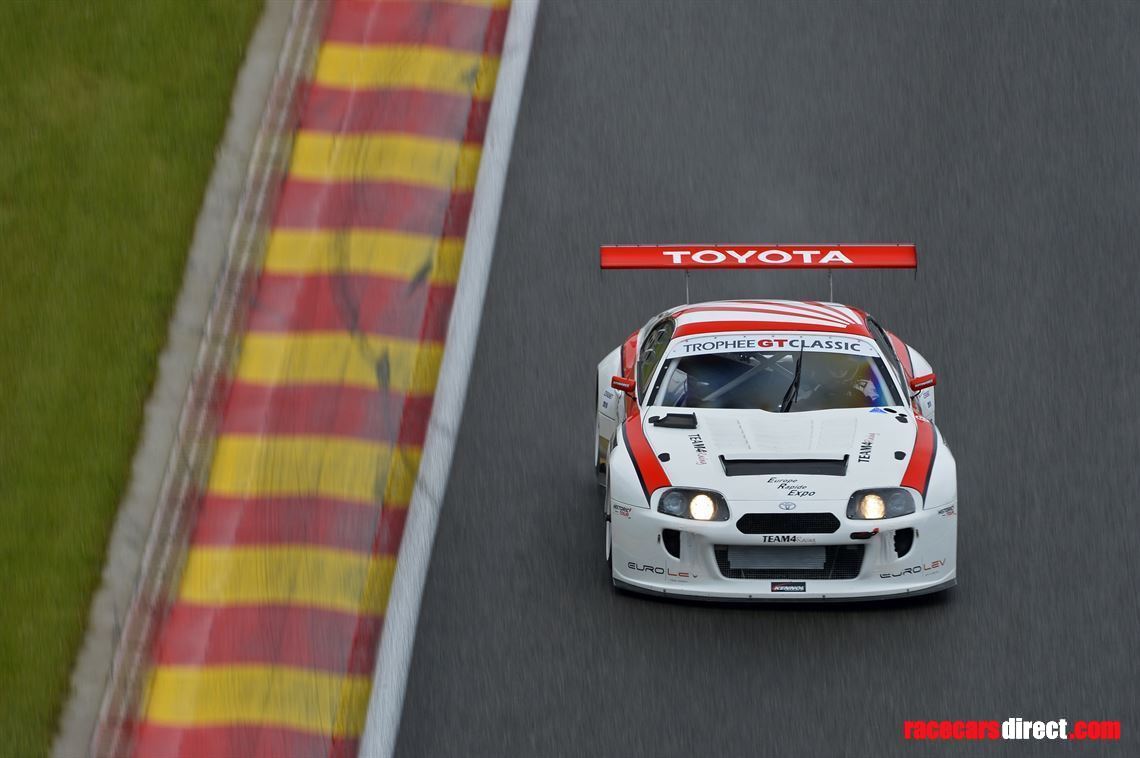 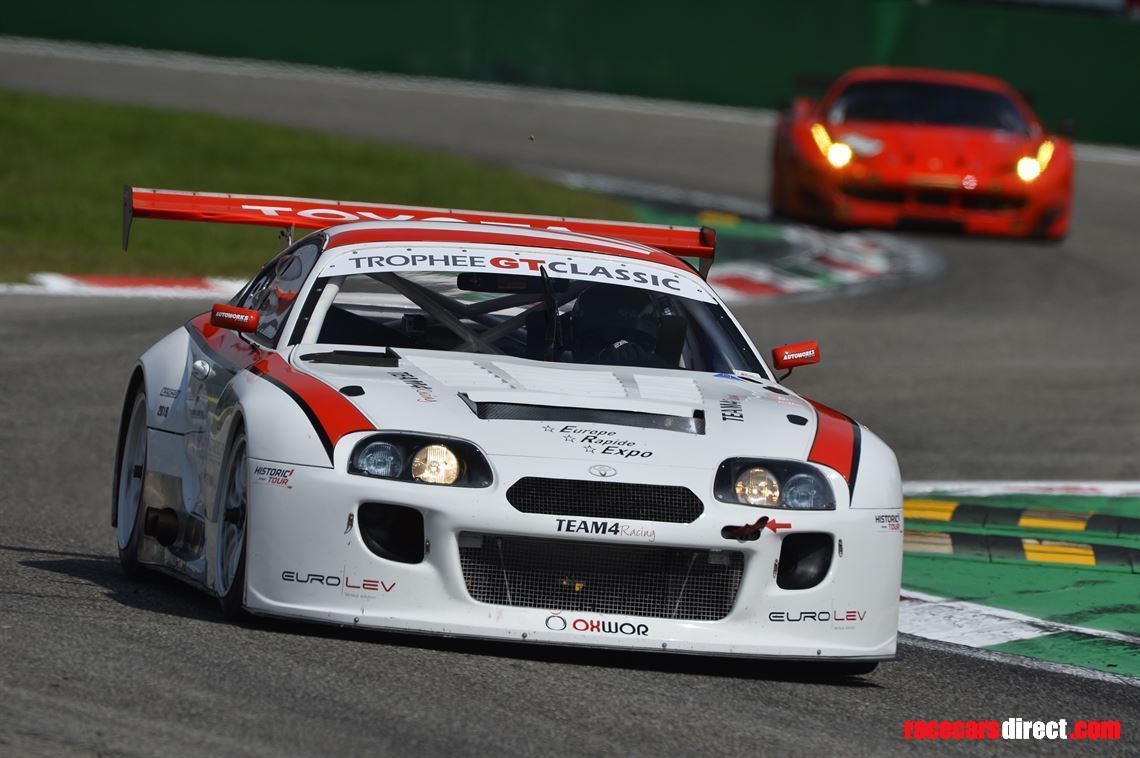 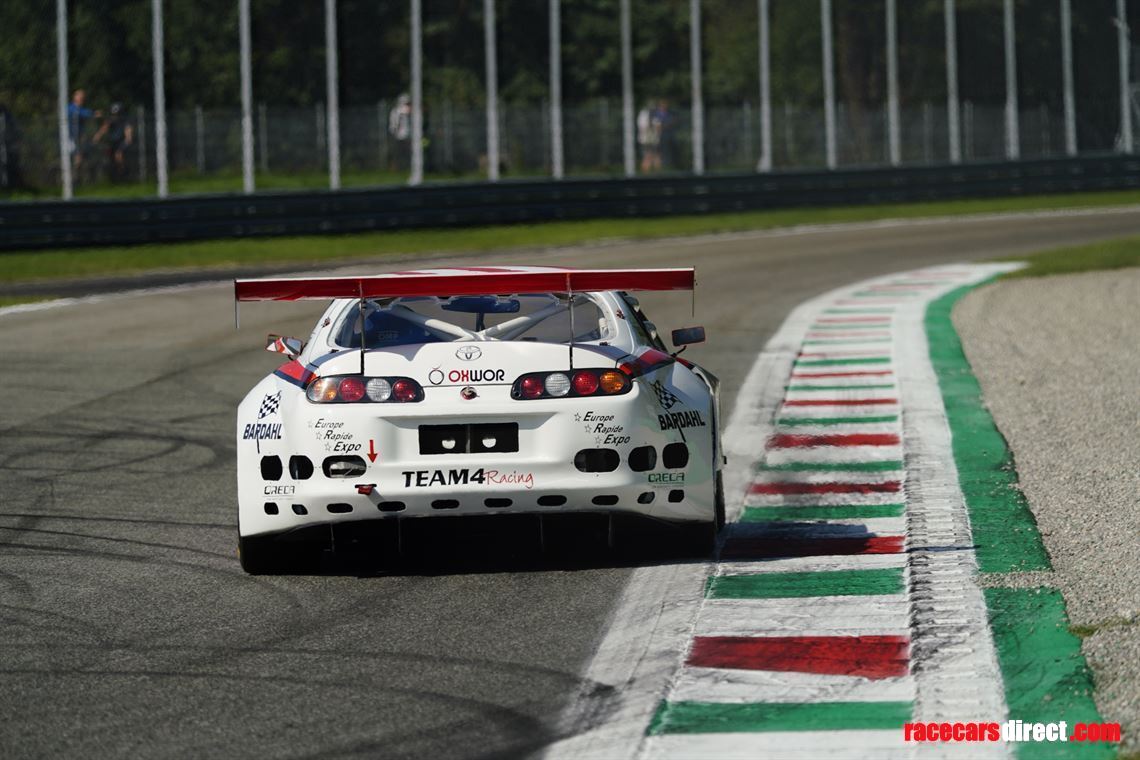 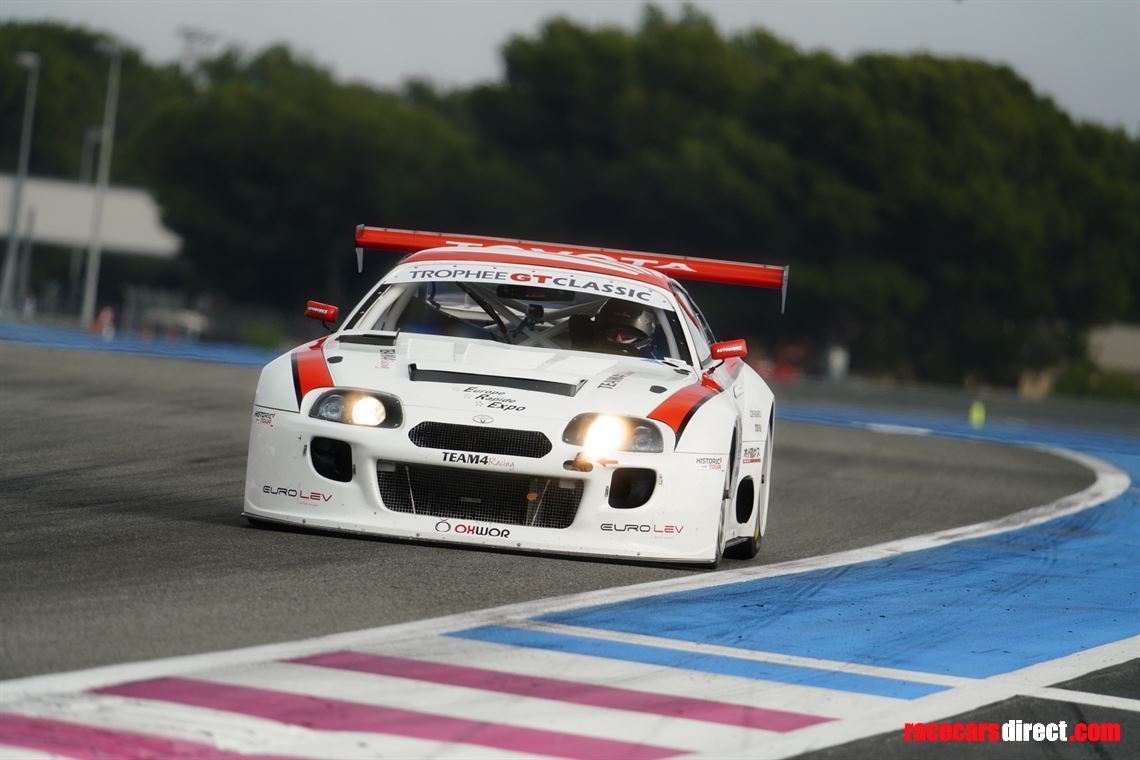 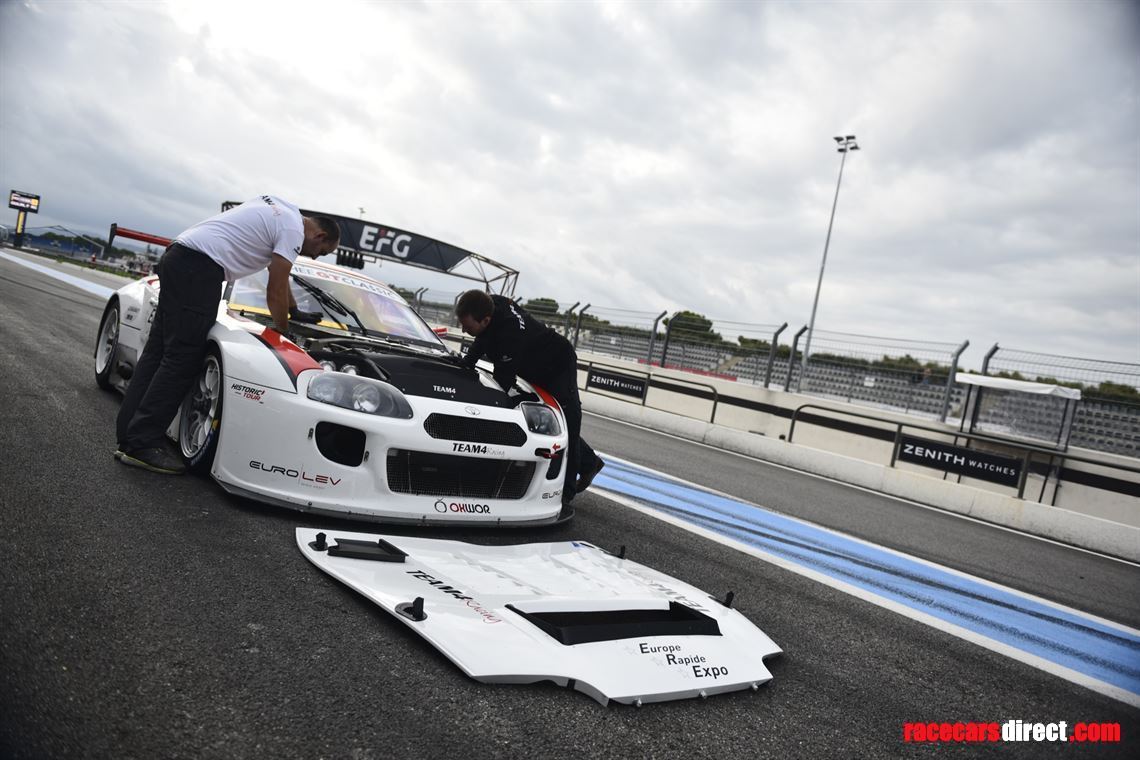 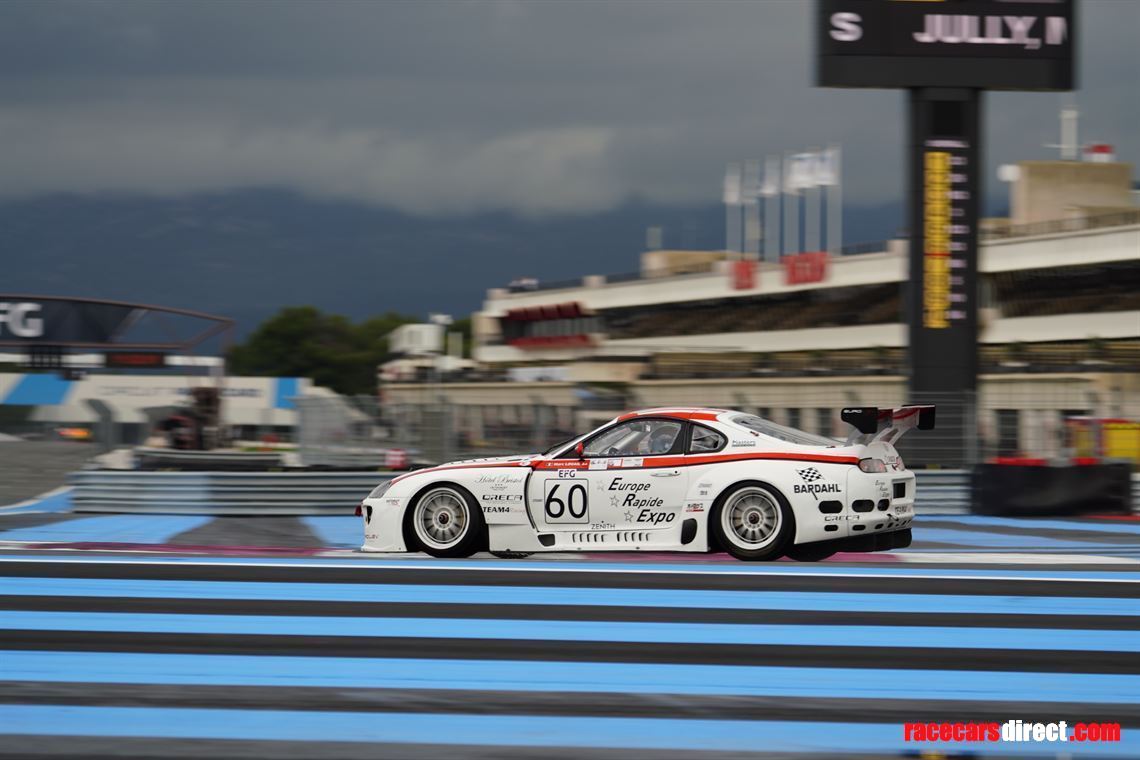 A rare and powerful GT2

This TOYOTA SUPRA GT2 was developed in France by Jean-Pierre Signoret in order to participate in the French FFSA Championship from 2002 to 2006. Over the years, it has evolved to reach a high level of performance. It has received a number of parts from the GT500 such as the bodywork, central nipple hubs, AP racing brakes as well as 18 inch Enkei rims.
Weighing in at 1,200 kg, this SUPRA GT2 is powered by a TOYOTA 2JZ-GTE 3-liter twin-turbo engine producing 750 horsepower at 1.6 and 600 horsepower at 1.45 bar. The engine preparation and mapping were developed by TEAM4, the workshop in charge of the car in conjunction with ORECA. Indeed, the electronic management is entrusted to Magnetti Marelli and it is ORECA that has entirely developed the different maps in order to offer performance levels adapted to the conditions of use (qualifying, race, wet track etc...).

The development of this rare GT2 was then entrusted to Soheil Ayari who used all his expertise to develop the SUPRA GT2 and make it usable for a gentleman driver. The workshop TEAM4 has done a lot of work in developing the SUPRA GT2. Knowing this car in the slightest details, the team is at the disposal of the future buyer to continue to look after this car.

In 2019, the TOYOTA SUPRA GT2 was entered in the Endurance Racing Legends (Peter Auto) races and proved to be very successful. At Spa Classic, where conditions were wet, it set a best time of 2.376 min. At Monza it turned in 1.546 min and in less than 2.04 min at Le Castellet.

With a crack-test valid until the end of 2022, a tank valid until 2023, new turbos, and an engine overhauled in 2021, the TOYOTA SUPRA GT2 that we offer for sale is ready to run. It is sold with a large set of parts including suspensions, wishbones, hub carriers, bearings and brake discs. Many body parts are part of the lot. Visible by appointment. 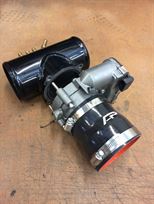