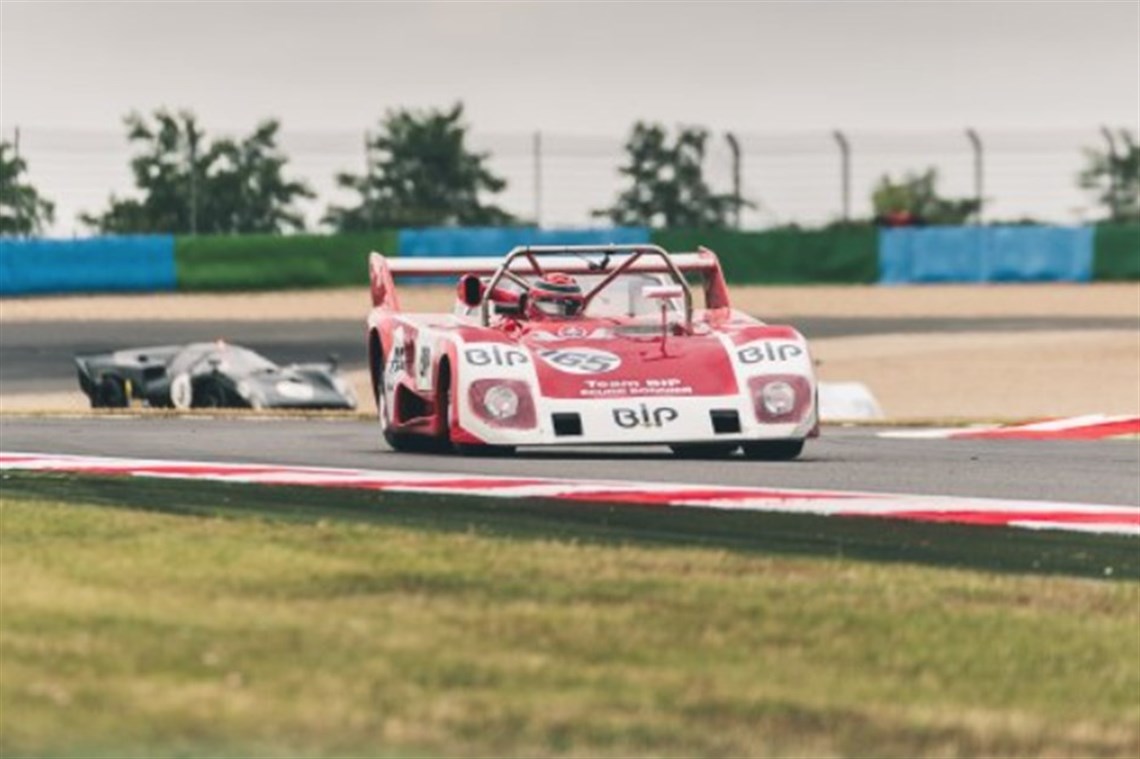 In a race that started on dry tarmac and gradually became wetter, Diogo Ferrao and Martin Stretton took their Lola T292 to a fine FIA Masters Historic Sports Car win in the Grand Prix de France Historique event at Magny-Cours. Ferrao battled with Manfredo Rossi’s Osella-Abarth PA1 during his opening stint before handing over to Stretton, who eased out to a lead of over half a minute to Mike Donovan’s Lola T70 Mk3B. Rossi still salvaged third despite spinning several times in the wet second part of the race.

Rossi led initially after Max Smith-Hilliard pulled off on the second lap, both having pipped front-row starters David Pittard (Chevron B8) and Jason Wright (Lola T70 Mk3B). Soon Ferrao was on his back, though, and on lap 5 the Portuguese driver passed his Italian rival. The pair ran nose-to-tail until the pitstops, in which the Kendle & Adams dealt slightly quicker with Rossi than Martin Stretton Racing did with their Lola. Rossi was back in front, with Paul Gibson ahead them both after illegally stopping ahead of the pit window. Stretton quickly dealt with both Rossi and Gibson to pull out a dominant lead.

Behind Stretton, a couple of spins dropped Rossi back into the clutches of the Lola T70 Mk3B gang led by Donovan, with Wright and Gibson at close quarters. After an entertaining fight Donovan took an easy second place while Rossi hung on for third. Jason Wright was a close fourth in his T70 Mk3B, and could have been third if the race hadn’t been red-flagged five minutes from the end because of Pierre-Alain France spinning his T70 Mk3B around at turn 10 and leaving it in a dangerous position. Wright had just overtaken Rossi, who had been in yet another spin, but on countback to the standings from the lap before the Italian kept his third place. Paul Gibson was an early contender in his T70 Mk3B but a drivethrough penalty for his early pitstop nudged him back to fifth.

“It was good fun fighting Manfredo, he’s a true gentleman driver”, said Ferrao. “We didn’t qualify well in the wet, and I was really catching on in those first few laps, learning how the track feels in the dry.”

“DIOGO DROVE FANTASTICALLY”, SAID STRETTON ABOUT HIS PORTUGUESE TEAM MATE HANDING IT TO HIM ON A PLATE.

“Manfredo got ahead at the pitstops but it started to speckle and he was just being a little more careful than I was. I got him going into the hairpin, and from then on it was a matter of driving away and opening up a gap. Conditions changed every lap, which made it difficult but good fun as well!”

“Yesterday I had no wiper, and was on wet tyres I hadn’t used for three years!” said Donovan about his dismal qualifying performance, which was soon forgotten when the race started in the dry. “It’s a fabulous circuit, it’s the first time for me here, and it’s so difficult in the wet. I enjoyed the fight with Manfredo, Jason and Paul, though, as I had to overtake them having dropped back at the pitstops. Everyone was making mistakes everywhere!”

“Diogo really gave me a hard time”, Rossi said. “And then in the second half of the race I think I spun five or six times! I could never have kept up with Martin, though. Even Diogo was a bit faster than me.”

On a dry track, the nimble Chevron B8s were unable to repeat their stunning qualifying form, but poleman David Pittard and team mate Graham Wilson still brought their B8 home in eighth overall and as the Bonnier class winners. Mark and Andrew Owen finished a close second in class, with Eric Perou and Luc Cheminot up next, in ninth and tenth overall respectively.

Keith Ahlers and Billy Bellinger (Cooper Monaco King Cobra) led the Hulme class all the way, Ahlers stretching away from Chris Jolly’s Cooper Monaco to open up a 30-second gap at the pitstops. Bellinger then pulled away further to win by a minute from Jolly’s team mate Steve Farthing. Gary Wright and Charlie Birkett were third in their Ford GT40.

“The car was very good, and we had a nice and clean race”, said Ahlers. “I lost sight of Chris fairly quickly, building a gap of one second per lap, and handed it over to Billy with a 30-second lead. Billy brought it home in the rain – I was waving from the pitwall for him to take it easy, as it was so treacherous out there!”

“I spun, as the brakes glazed up”, said Jolly about disappearing from Ahlers’ mirrors. “We had put on new brakes but in the wet yesterday we were unable to run them in properly. So I couldn’t really push.”

“IN THE WET, THERE WAS JUST NO GRIP”, SAID FARTHING. “I’M JUST HAPPY TO HAVE FINISHED!”

Among the early casualties were the Max Smith-Hilliard/Nick Padmore Chevron B19, the former pulling off on the second lap, while Laurie Bennett gave up in his McLaren M1B without completing a lap. The pit-window period proved to be uneventful – except for the Gibsons’ error, that is – when Christian Tedeschi’s Chevrolet Corvette spun off at the chicane to cause the race to be neutralised just when the pit window was about to open.

The only M6GT racing in Europe