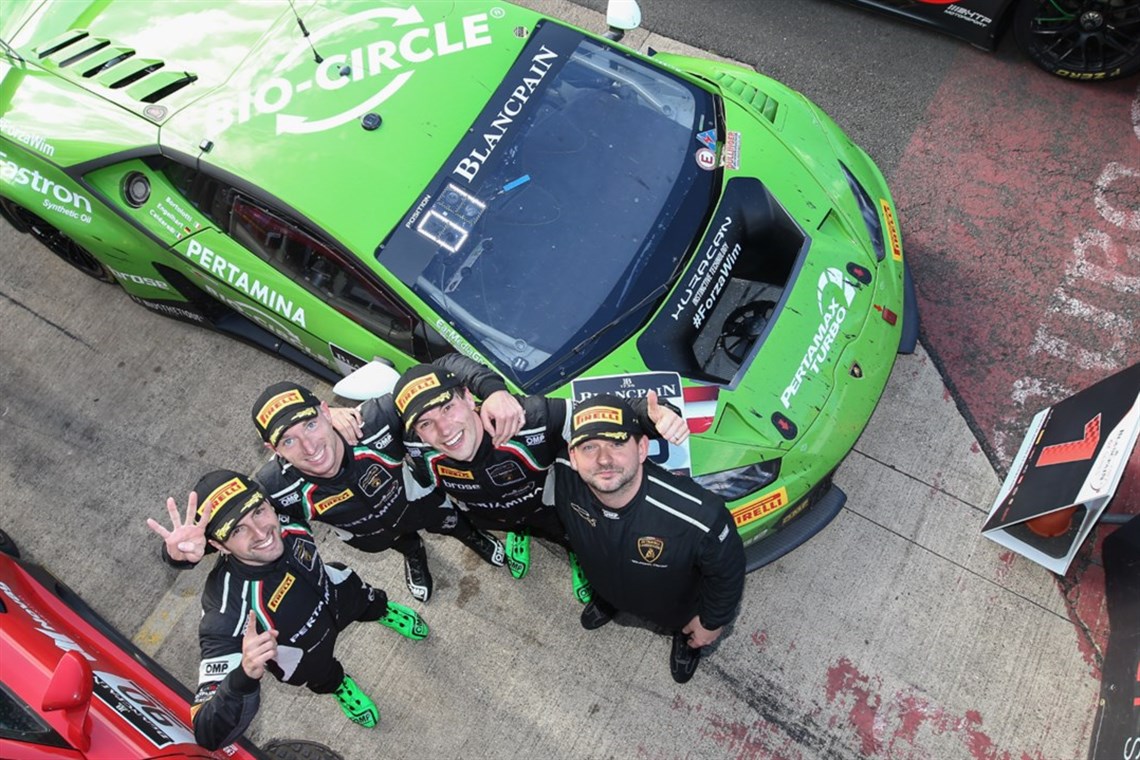 The #77 Barwell Motorsport-entered Lamborghini Huracan GT3 claimed the Pro-Am honours, while Rinaldi Racing’s #488 Ferrari 488 GT3 topped the AM field in a thrilling affair at the Home of British Motor Racing.

After an extra formation lap was needed, Bortolotti powered into the lead at Copse Corner from second place on the grid, as the Lamborghini factory driver overhauled the pole-sitting #88 AKKA ASP Mercedes-AMG GT3 of Felix Serralles at the green light. Bortolotti quickly opened a comfortable gap of over six seconds up front, while Serralles fell out of contention when he was judged guilty of a false start and had to serve a one-minute Stop-and-Go penalty.

Behind, Jonny Kane’s #44 Strakka Racing McLaren 650S GT3 was then sent into the barriers at Turn 3, which triggered a lengthy Safety Car period. AKKA ASP put the neutralisation to great use with an early pit stop that promoted the #90 Mercedes-AMG GT3 into the top spot ahead of the #63 Huracan.

Third-placed Jimmy Eriksson took advantage of the battling duo up the road to reel them in with Mercedes-AMG Team HTP Motorsport’s #84 machine. The Swedish driver was soon all the over the back of Caldarelli and when the Italian lost momentum trying to overtake Meadows, Eriksson pounced on the inside of the Lamborghini to grab P2.

The trio continued to run nose-to-tail all the way through to the final round of pit stops, with Bentley Team M-Sport’s Andy Soucek in the #8 Bentley Continental GT3 even making it a four-way battle as they all peeled into the pit lane with just over 60 minutes of action left on the clock.

Excellent service work from the GRT crew enabled Christian Engelhart to leapfrog the #90 and #84 Mercedes and emerge back in the lead. The German driver still had to resist Raffaele Marciello’s charge, with Maxi Buhk and Davide Rigon’s #72 SMP Racing Ferrari 488 GT3 also breathing down the race leader’s neck.

And resisted Engelhart did, although he had to manage some tricky situations through traffic. One of these close encounters with a backmarker almost cost the #63 Lamborghini the lead but it was Marciello who ultimately lost out, as the Italian ace slipped behind Buhk.

That was not the end of the story though, with the reigning Blancpain GT Series Overall champion inching ever closer in the final minutes. With two minutes left in the race, Buhk was glued to Engelhart’s gearbox with traffic up the road and a long 5.891 kilometres to take on for a final time… or so it seems! Indeed, the #63 crew thought they had the win in the bag, but Engelhart crossed the line with three seconds to go.

That meant an extra lap holding off the charging Buhk. Engelhart kept his cool under intense pressure to clinch Grasser’s third win in as many Blancpain GT Series weekends, following their successes at Monza and Brands Hatch.

The Pro-Am category initially shaped up to be a titanic scrap between the pole-sitting #87 AKKA ASP Mercedes-AMG and Rinaldi Racing’s #333 Ferrari 488 GT3, with Jules Gounon and Daniel Keilwitz jostling inside the overall top 10 early on. The German driver grabbed the class lead, only for the #333 car’s race to spin out of control when the Ferrari was handed a drive-through for speeding in the pit lane. Failure to serve the penalty resulted in a black flag for the Pro-Am points leaders, while the #77 Barwell Motorsport-entered Lamborghini Huracan GT3 of Adrian Amstutz, Martin Kodric, and Patrick Kujala picked its way up the field to claim the bragging rights in the category.

It was no walk in the park though, especially given the speed shown once again by Ahmad Al-Harthy and Jonny Adam in the #97 Aston Martin V12 GT3. The Oman Racing Team with TF Sport pairing motored under the chequered flag just over a second behind the winning Lamborghini. After Gounon’s strong opening stint, teammates Jean-Luc Beaubelique and Nico Bastian ensured a solid third-place result for the #87 AKKA ASP entry.

The AM category crowned a two-man crew in Pierre Ehret and Rino Mastronardi on the #488 Rinaldi Racing-entered Ferrari 488 GT3. Second in class was another Ferrari 488 GT3, the #888 Kessel Racing car of David Perel, who had claimed a dominant class pole position on Sunday morning, Marco Zanuttini and Jacques Duyver. Completing the AM podium positions were Matias Henkola, David Schiwietz, and Henry Walkenhorst on the #36 Walkenhorst Motorsport-entered BMW M6 GT3.