Porsche 919 Hybrid one - two at Nurburgring 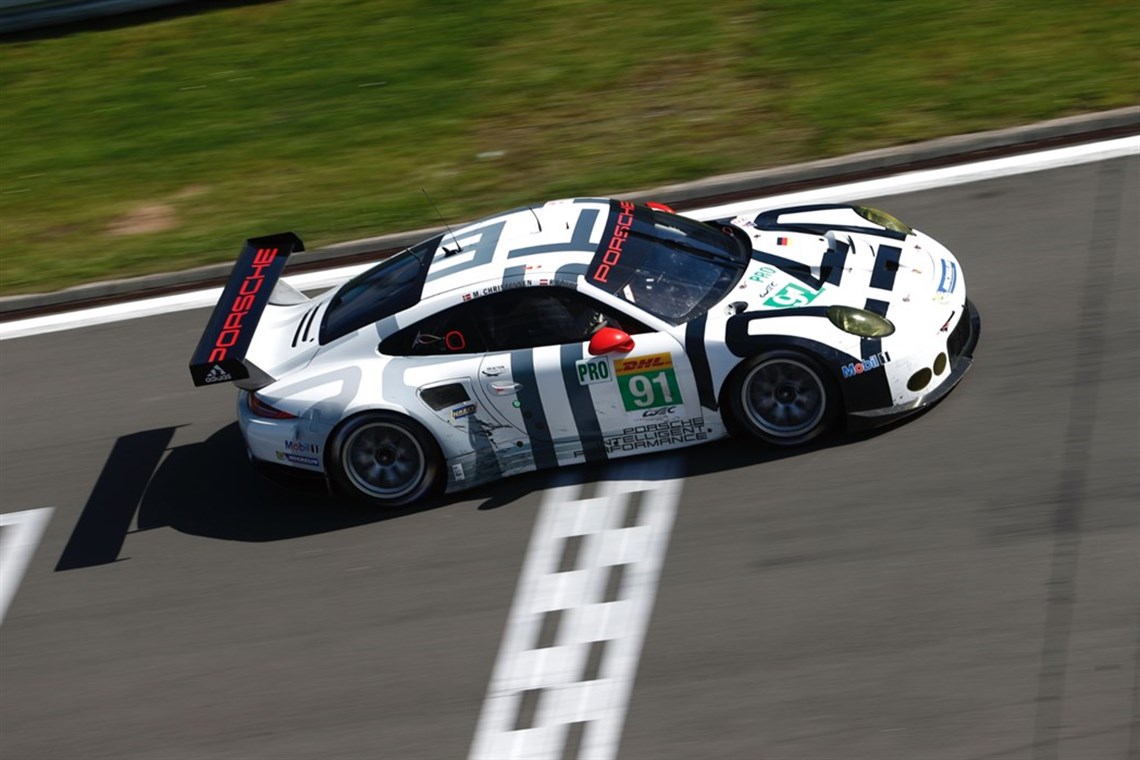 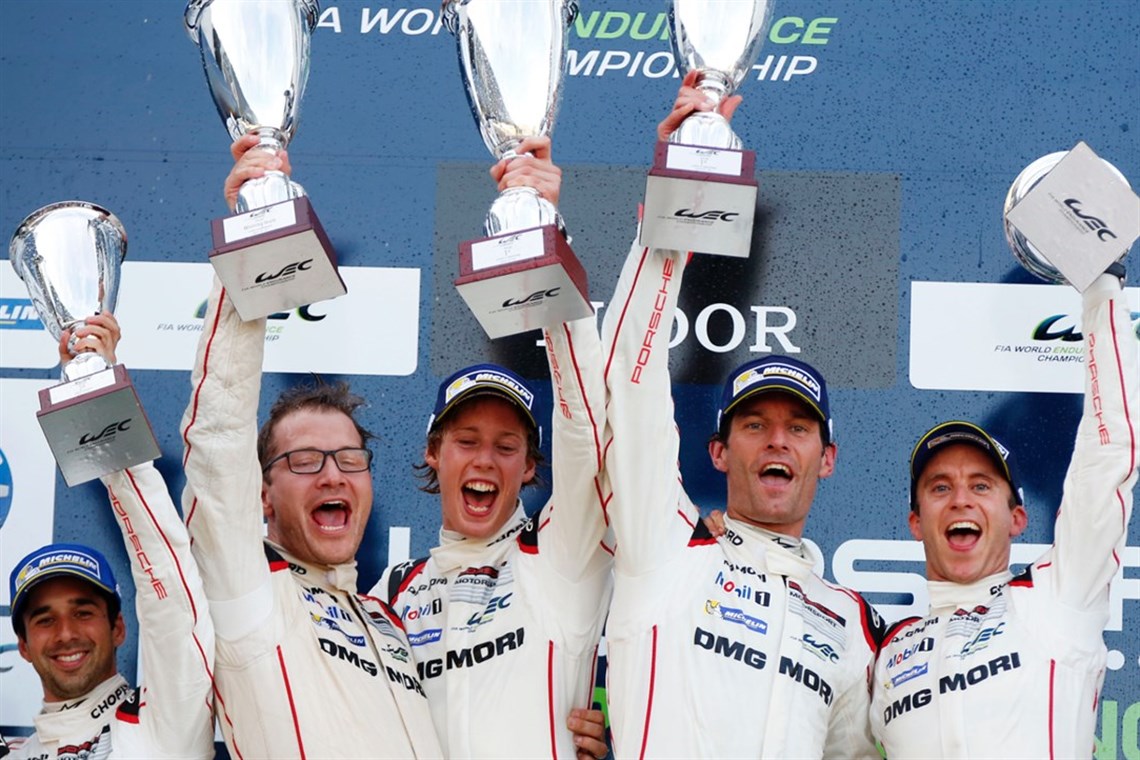 The Porsche Team claimed a one-two result in front of a great crowd at the fourth round of the FIA World Endurance Championship (WEC) at the Nürburgring, Germany, this weekend.

After the maiden victory of the Porsche 919 Hybrid at last year’s finale in Brazil and the recent one-two result at Le Mans in 2015, this is the third major success for the young team and the LMP1 race car with its ground-breaking hybrid technology. For the driver line-up, which includes former Formula One driver Mark Webber, it is the first and long hoped for WEC race win. With this dream result Porsche has extended its lead in the Manufacturers’ World Championship and is now lying 33 points ahead of Audi and 95 ahead of Toyota.

With the relatively short and twisty 5.137 kilometre long circuit and the numerous class categories going at different speeds, the race was action-packed with thrilling lapping and overtaking manoeuvres. The journey taken by the Dumas/Jani/Lieb car en route to second was full of stories. After starting from pole, they lost the lead in the first half of the race because of long ‘stop-and-go’ penalties after a technical problem. While the team usually changed drivers at every fuel stop at the Nürburgring, Neel Jani stayed in the car for 76 laps, which was two and a half ‘stints’ (a stint being typical distance between pit stops). It was also Jani who recorded the fastest race lap at the Nürburgring with a time of 1:37.955 minutes.

How the race went for car number 17:
Timo started from second on the grid behind the sister car. During a “Full Course Yellow” he lost around ten seconds because of slow lapped cars between him and the leading car. Later a damaged nose cone disturbed the air flow over the car, which is why the team decided to pit early. After 24 laps, Timo handed over to Mark, who continued with new front bodywork. Eventually having dropped back to sixth, Mark overtook the number 7 Audi on lap 40 to place second again behind the sister car.

After 56 laps Mark handed over to Brendon, who took the lead on lap 64 when car number 18 was penalised. After 89 laps Timo took over the leading car to hand it to Mark again after 123 laps. During a Full Course Yellow after 144 laps Brendon jumped in again. After 175 laps Mark took over for the final stint and brought the car home to take the victory.

How the race went for car number 18:
Neel defended pole position against the sister car. After 31 laps he handed over to Marc, when leading by over a minute. After 54 laps Marc received the first of, in the end, three so-called ‘stop-and-go’ penalties for the number 18 car. The first was five seconds. When he resumed in the race he battled hard against Mark in the sister car and defended the lead. After 63 laps Romain got behind the wheel, and re-joined in second place. But after 78 laps he was given a 30 second stop-and-go, followed by a 60 second stop-and-go after 82 laps. The reason was a problem with an engine sensor, which caused the car to use more fuel per lap than the regulations allowed.

After 96 laps Neel got back into the car in fourth place. He stayed in the car for a double stint, picking up fuel and tyres after 129 laps. When the next Full Course Yellow was instigated he drove even longer, because he pitted for fuel after only 144 laps. After he overtook the number 8 Audi he was lying third. From lap 167 onwards he was in a breath-taking battle with both Audis. After 172 laps, Neel pitted with the car lying third. Marc took over for the final 45 minutes and improved to second place.

Quotes after the race:
Matthias Müller, Chairman of the Executive Board Porsche AG: “After the successful Le Mans weekend we came here with huge expectations. The time since June 14 was obviously very well used and today we have shown what Porsche is able to do. Not only in LMP1, but also in the GTE Pro class. Congratulations to everyone involved.”

Wolfgang Hatz, Board Member Research and Development: “One-two in qualifying yesterday, one-two in the race today with the 919 Hybrid as well as with two Porsche 911 RSR – you just can’t ask for more. Everyone was rewarded for hard work.”

Fritz Enzinger, Vice President LMP1: “To achieve a one-two at the first WEC race on home soil is a dream come true. The new aerodynamic package works very well. This and today’s points brings us a little closer to our goal to win the Manufacturers’ Championship. I also want to thank the entire team back home in Weissach. We are looking forward to the next four six-hour races.”

Andreas Seidl, Team Principal: “For us the race was a bit of a rollercoaster. With the number 17 car we had damage early on, but kept clean after that. The number 18 car had to come in three times for a stop-and-go penalty. Because of a technical problem we had exceeded the energy limit we are allowed. But the drivers never gave up and fought back. Our pit crew was, once again, the benchmark by doing the fastest stops. I also want to thank our tyre partner Michelin for a great co-operation, which played an important role in today’s achievement, especially in regard to the high temperatures.”

Drivers Porsche 919 Hybrid number 17
Timo Bernhard (34, Germany): “We have been close to victory a couple of times and now it has worked out. The start was okay, but during the Full Course Yellow I lost ground due to lapped cars between me and the leading sister car. At some point the car became difficult to drive because of front damage and we decided to pit early for a new nose cone after 24 laps. After a tricky beginning, we managed to fight our way back to the lead. Of course, we were benefitting from the sister car’s bad luck, but we were also doing a good job.”

Brendon Hartley (25, New Zealand): “I’m incredibly happy that we got our first win. After Timo was a bit unlucky in his first stint, everything went smoothly. With the new front nose the car’s performance was back where it should be, and I took the lead when our sister car was penalised. Later we kept our heads down and stayed focussed.“

Mark Webber (39, Australia): “Achieving the second one-two after Le Mans is great for our team. This is my first Porsche victory and, of course, it is a big day for Brendon, Timo and myself, and it is always a team effort. The two of them were awesome, we had no technical issues and took an important step by improving our performance on shorter tracks. Traffic was sometimes brutal today, but we made it.”

Drivers Porsche 919 Hybrid number 18
Romain Dumas (37, France): “The technical problem and the resulting penalties were a huge disappointment today. Finishing second is a great result under the circumstances, and it is certainly important for the Manufacturers’ Championship. We could only fight back in the race because we were strong this weekend, and this for sure goes for our pit crew as well, this has to be mentioned.”

Neel Jani (31, Switzerland): "My first stint still was a dream - pretty much the opposite to the early laps in Le Mans. But then we lost a race win because of the penalties. Battling with the Audis was again interesting. I was faster in the first part of the lap and was able to get past, but then I had to save fuel and they caught me again on the second part of the lap. In the end we managed to beat them.”

Marc Lieb (35, Germany): “It was such a shame we could not win the race because of the penalties. We had been very happy after the pole position yesterday, but today wasn’t our day. It is really frustrating when you are called into the pits to needlessly sit there. Regardless of how our race went, it made me proud to see this huge crowd here at the Nürburgring.”

Perfect in original condition! Only one year raced the very first races of the new Cup