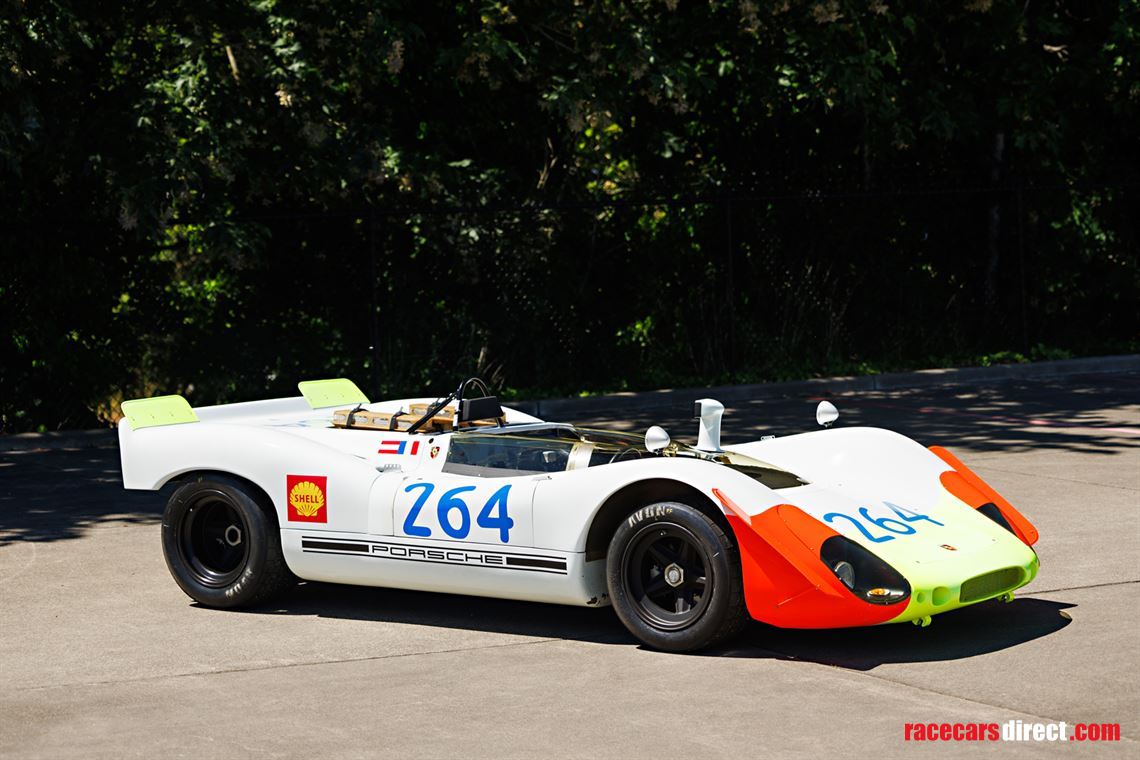 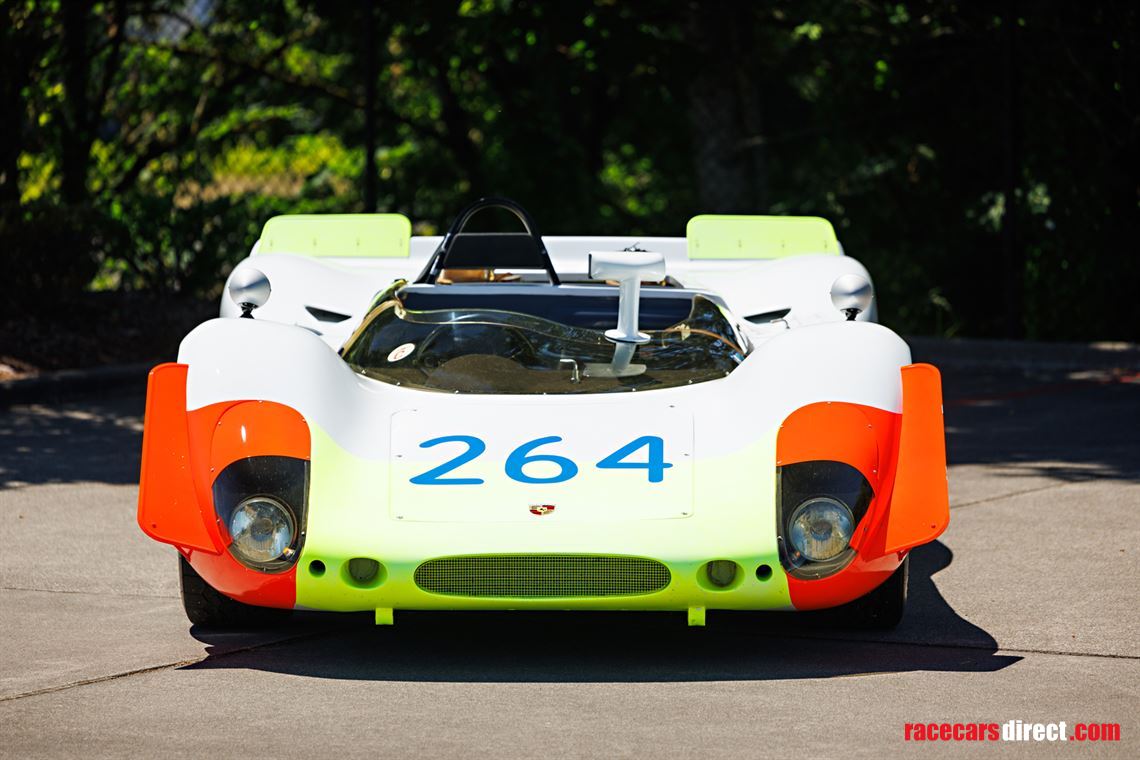 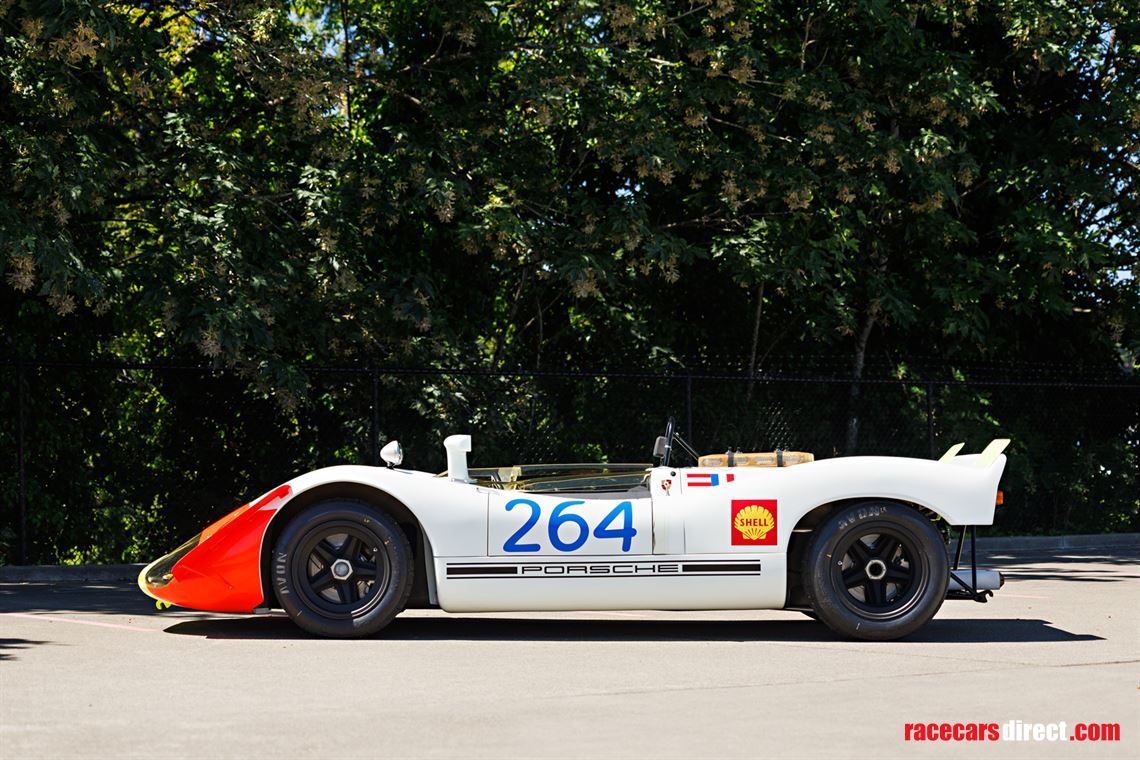 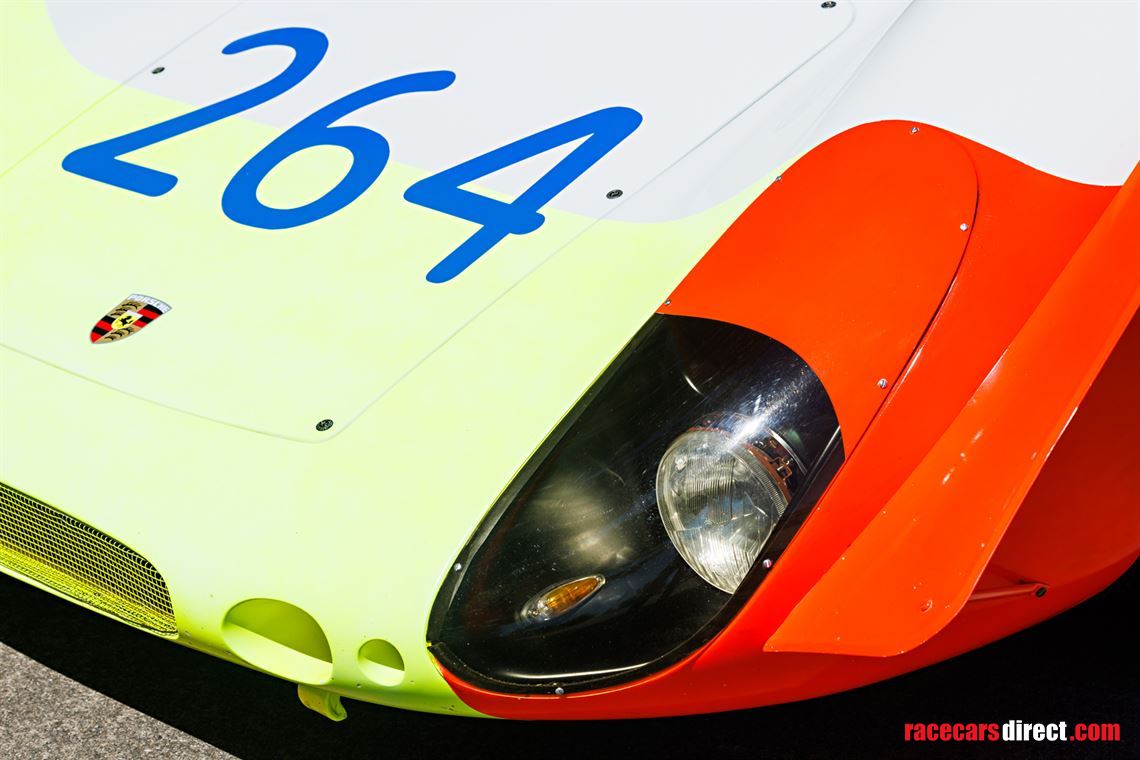 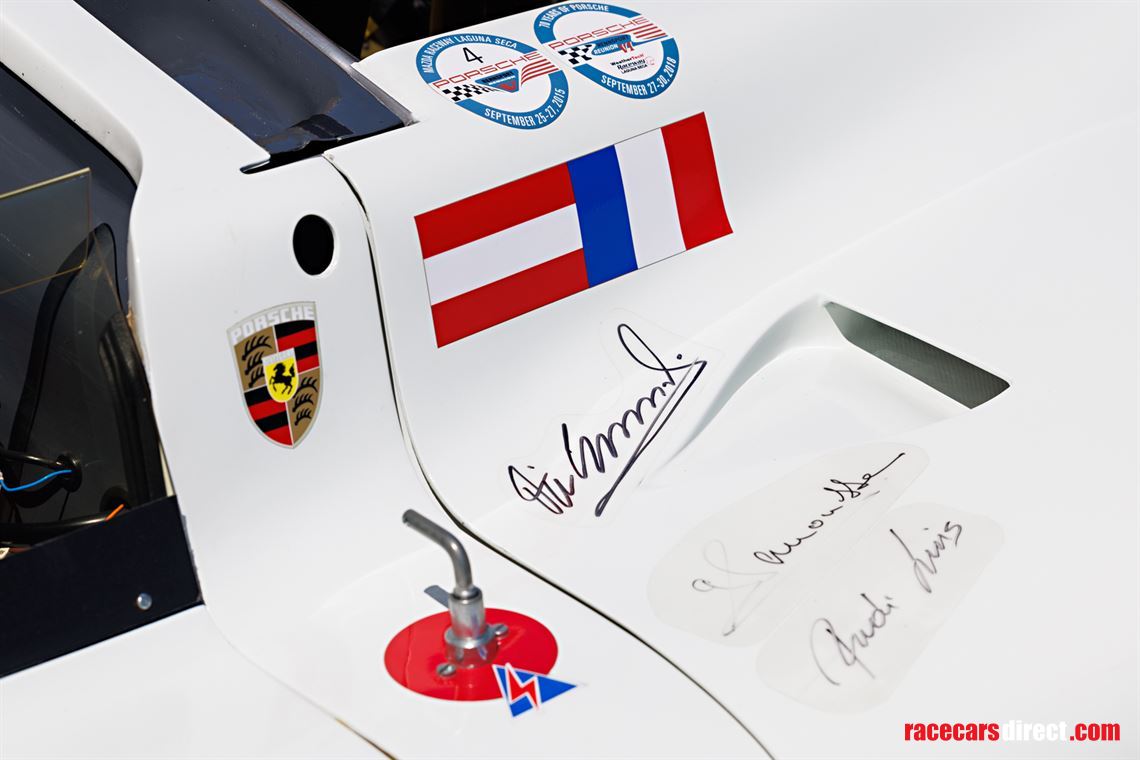 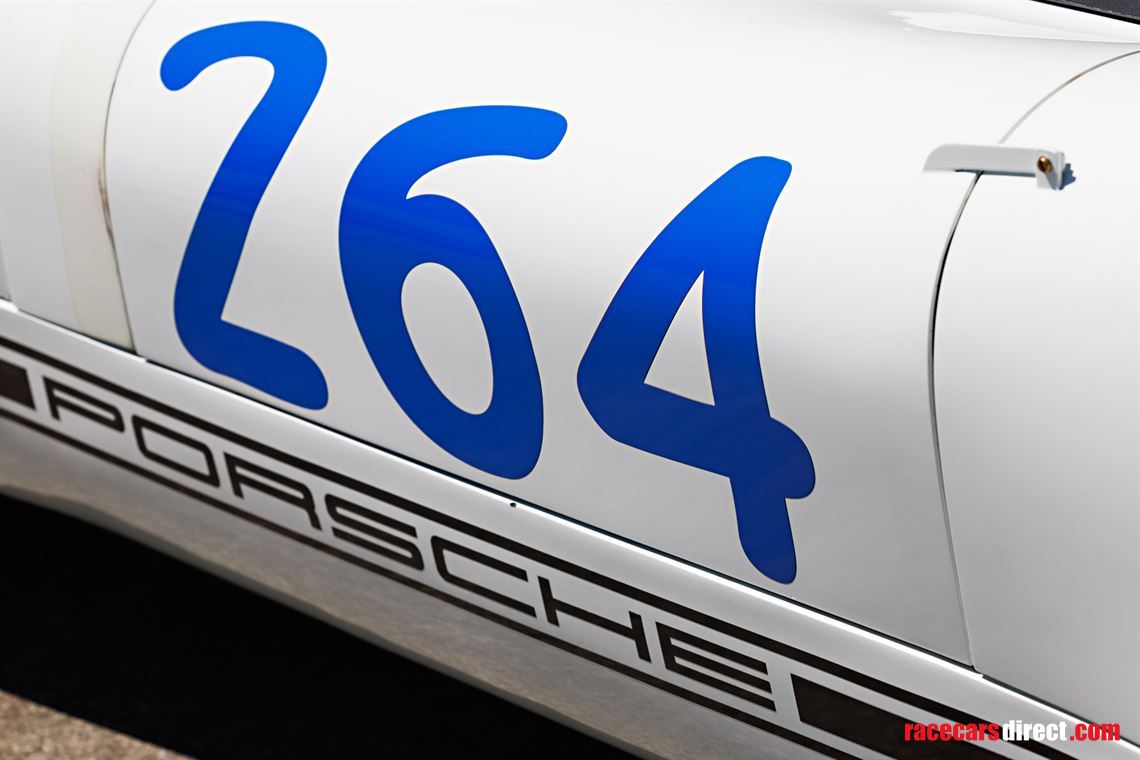 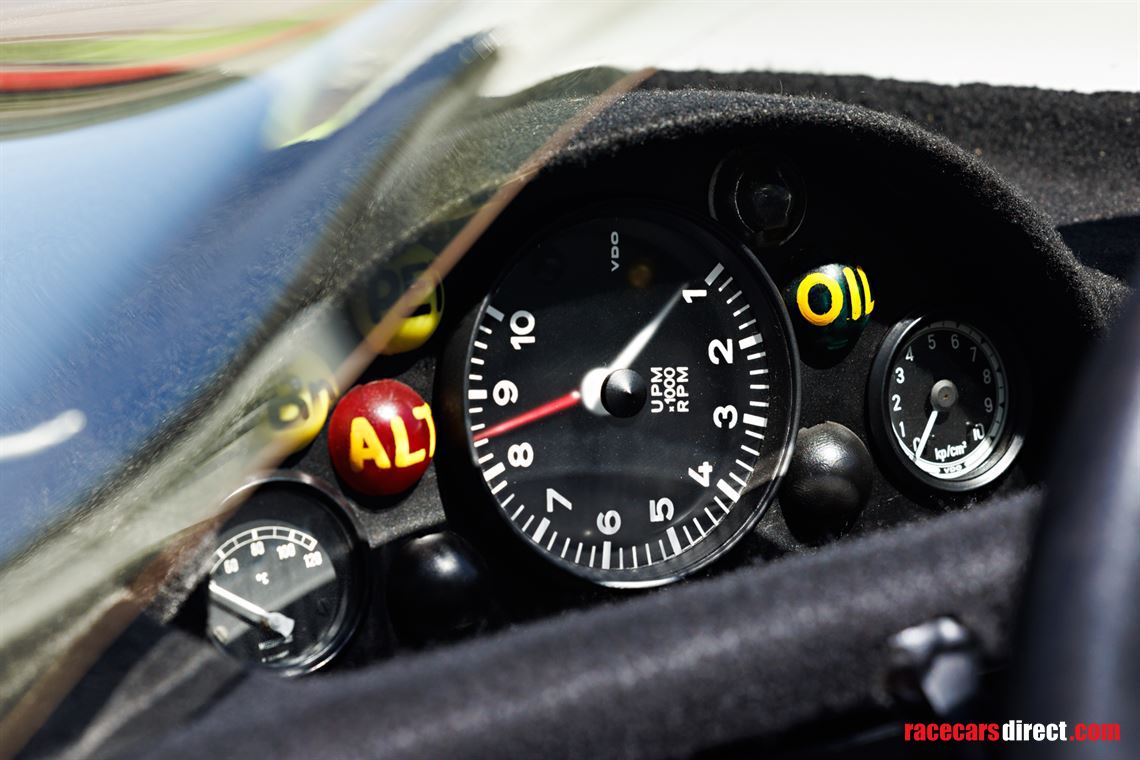 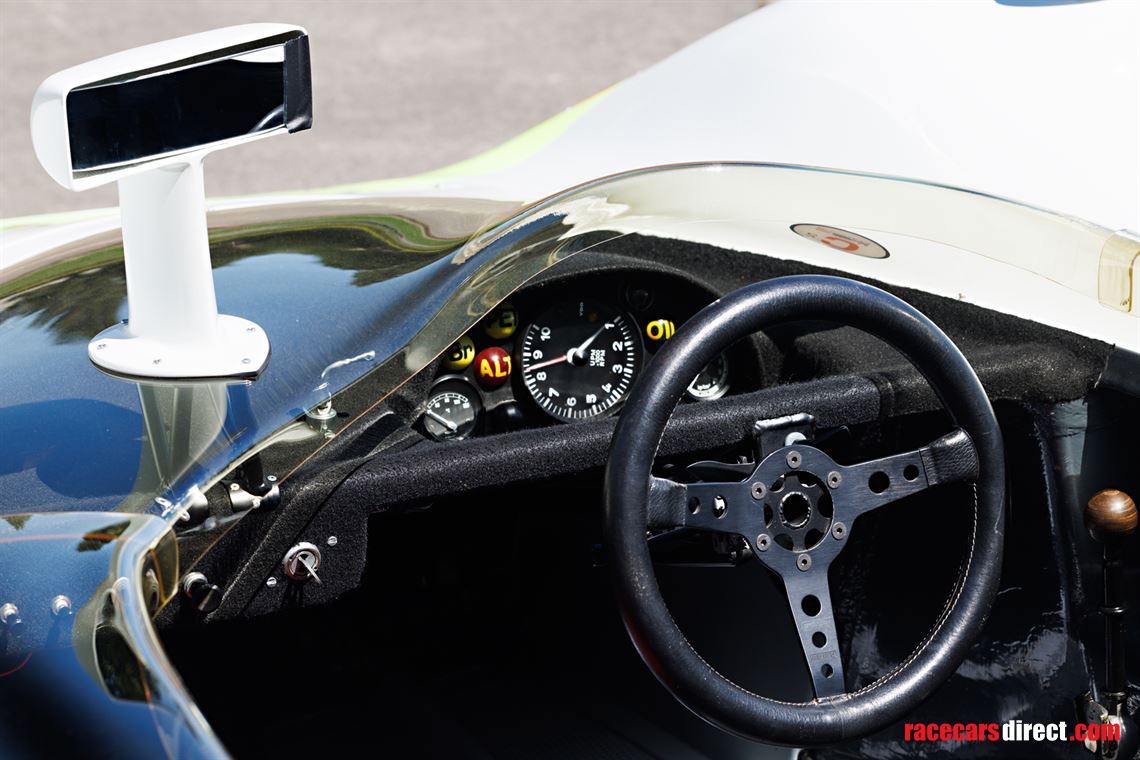 By the late 1960s, Porsche’s legacy as a manufacturer of the world’s finest sports racing cars had been firmly cemented. Models, such as the 550 Spyder, RSK, RS60, 904, 906, and 910 had competed at the highest levels of sports car racing worldwide, and captured class and overall wins at the majority of the sport’s most prestigious events.

Building on the 910’s tube frame and bonded fiberglass bodywork architecture, the 907 was introduced in 1967 as Porsche’s first serious assault on overall victories at races, such as the 24 Hours of Le Mans and Daytona, and the 12 Hours of Sebring. Powered by a 2.2-liter, flat eight-cylinder engine, the 270 hp 907 was fast, but not the ultimate solution for the events that Porsche coveted most.

For 1968, international regulations changed and a new category for three-liter sports cars was introduced for that year, with a five-liter category to come for 1969. With Porsche’s 911 road car generating revenue that the company had never before had access to, the decision was made to develop the 907’s replacement, the 908, in conjunction with the company’s challenger for the five-liter category, the 917.

Conceived by Ferdinand Piech and engineer Helmut Bott, the 908 was initially developed as a coupe, fitted with either short- or longtail bodywork. It produced mixed results, being soundly defeated by the older 907 at some events due to vibration issues of the 908’s three-liter engine. At Le Mans, the factory longtail 908s all failed, and a 907 finished second to a Ford GT40.

For 1969, another change to Group 6 regulations brought a shift to the 908, which lost 220 lbs. when converted to an open Spyder specification, and was built exclusively with aluminum frame tubes. Additional upgrades were a lighter five-speed transaxle and a revised engine with a different crankshaft that cured the earlier version’s damaging vibrations. Titanium axles were fitted, and the lithe 908/02 Spyder was draped in glass-fiber bodywork that weighed a mere 13 kg, helping the finished car to weigh just 600 kg (1,323 lbs.) overall.

Early results with the new Spyder were not promising, and all three failed to finish their first races at the 24 Hours of Daytona in 1969. At the 12 Hours of Sebring, Rolf Stommelen, Joe Buzzetta, and Kurt Ahrens Jr. drove a 908/02 to 3rd Place, a harbinger of the domination that would come in many races the rest of the season.

The stunning 908/02 offered here is chassis 010, which, according to a copy of its build record on file, was completed on April 8, 1969. Just five days later, in its first event as a Porsche works entry, it competed as one of three Spyders entered in the BOAC Brands Hatch 6 Hour race in the UK. Chassis 010 was driven by legendary drivers Vic Elford and Richard Attwood, who placed 2nd, as part of a dominant 1-2-3 finish for Porsche.

Three weeks later at the Targa Florio in Sicily, Italy, Porsche entered no less than six 908/02 Spyders, along with two 907s and two 911Rs, in an all-out assault on the prestigious race. Chassis 010 was emblazoned with a Day-Glo livery that it wears today, and was driven to a disappointing 21st Place by Rudi Lins and Gérard Larrousse due to mechanical troubles. Despite the poor showing by 010, Porsche’s efforts at the Targa Florio were rewarded with a sweep of positions 1–4, as well as 6th and 7th with the 907s.

The third and final works-entered race for 010 was the ADAC Nürburgring 1000 Km on the fearsome Nordschleife, where it arrived as a backup car, but became an entrant after chassis 018 was in an accident during practice. Porsche had extensively tested its new 917 ahead of the German event, and it proved to be something between cumbersome and horrifying to drive, depending on which driver you asked. It was clear that the 908/02 was the superior car, and five were entered against just one 917. Elford drove 010 once again, this time paired with Kurt Ahrens Jr. Wearing red and green identifying colors, the pair started from the third row on the grid and finished 3rd Overall, as part of another 1-2-3 victory for Porsche. Importantly, the results at the Nürburgring secured the 1969 World Sportscar Championship for Porsche with three races left in the season, cementing the dominance and legacy of the 908/02.

Following its well-worn path of selling works cars to private owners after a few races, Porsche sold chassis 908/02-010 to Swiss-based racer Richard Broström in June 1969, replacing his 910 (chassis 028) that he had raced earlier in the year. Broström was well known as a formidable competitor who had been able to lure great drivers, such as Joakim Bonnier and Masten Gregory, to partner with him in endurance races. With a top-level 908/02 at his disposal, Broström won his first race in 010, a non-championship event at Anderstorp in Sweden. This was followed by 5th Place at Hockenheim and an unfortunate disqualification at Zeltweg for driver Masten Gregory.

The 908/02’s next race was one of the more interesting in its incredible career. Chassis 010 had been fitted with Porsche’s updated “Flunder” (flounder) bodywork, presumably by the Porsche factory. Pedro Rodriguez was in between Grands Prix for BRM and was invited to drive the car in the Interserie race at the Norisring in June 1970. While outmatched by the Porsche 917s of Gijs van Lennep and Jürgen Neuhaus, Rodriguez drove 010 to 3rd Overall and 1st in Class against a strong field of competitors.

By November 1971, the 908/02 had been sold to another prominent Swiss privateer racer named André Wicky of Laussane, Switzerland. Like Broström, Wicky acquired the 908 to replace another ex-works Porsche, this time for 907 chassis 031. A Porsche repair order on file from February 1971 indicates that Wicky shipped 010 to the factory for work to be completed, which included repairing a fuel tank and installing an FIA-mandated brace.

Wicky entered the 908/02 in many events over the course of the next four years, competing in some of the most prestigious endurance races throughout Europe, including the 1000-km races at Dijon, Monza, and Nürburgring. Importantly, this 908 competed in four 24 Hours of Le Mans races, highlighted by a 21st Place finish in 1973, wearing a Camel Cigarette livery. Wicky owned 010 until 1981, when it was purchased by enthusiast and racer Albert Eggs of Sierre, Switzerland.

According to invoices on file, Eggs took the 908/02 back to Porsche circa 1982 for extensive reconditioning, but its event record during his ownership is unknown. California-based collector and gentleman driver Said Marouf purchased the 908/02 in 1989, and raced it in vintage competition, supported by mechanic Rob Shanahan. In 2005 it was sold at auction to Miguel Amaral of Portugal, still fitted with the Flunder bodywork that was fitted for Richard Broström in 1969.

Mr. Amaral desired to race the 908/02 at high-level vintage racing events, and sent the car to the noted specialists at Lanzante Limited in the UK for a complete restoration to contemporary racing specifications. This work is documented by extensive photos and videos on file, and included the replacement of the Flunder bodywork with new panels of the same style. The 1969-era pieces were retained and continue to accompany the car. Mr. Amaral’s exploits in 010 include competing in the 2010 Le Mans Classic. The current owner bought the 908/02 in 2011 and brought it to the US.

Desiring a more exacting, period-correct restoration, as well as a return to the original “Coke bottle” style bodywork and period livery, the consignor compiled a team of noted professionals to return the car to 1969 Targa Florio specification. Louie Shefchik’s team at J & L Fabricating in Puyallup, Washington, handled disassembly, reassembly, and logistics, while the body and chassis were sent to 908 expert Kevin Jeanette at Gunnar Racing in Florida. The engine, which is stamped no. 90803009, was sent to the experts at Jerry Woods Enterprises (JWE Motorsports) for a full rebuild and cosmetic restoration.

Upon disassembly and review of the file, Gunnar Racing discovered that 010 was a very sound and original example, and its race record does not record a single accident in six years of professional competition. The transaxle fitted is no. 020, which corresponds to factory documents showing it to be the same unit installed by Porsche for its final race as a works competitor, the 1969 Nürburgring 1000 Km. Any correct components that had been replaced or lost throughout the car’s history were sourced by Gunnar Racing and installed. The restoration is a marvel, easily surpassing the standards of even the most ardent fan of prototype Porsches.

Determined to experience his 908/02 as Porsche intended, the owner has subsequently raced it selectively, participating in the Monterey Pre-Reunion and Rolex Motorsports Reunion in 2015, the Rennsport Reunions in 2015 and 2018, and Velocity Invitational in 2021. It has also been accepted to the Velocity Invitational this coming October.

Just as many period drivers preferred the 908 to other cars from the era, the owner has been thrilled with this 908/02’s performance and reliability, recording not a single DNF in the events he has raced. Documentation showing its recent care accompany the car, including setup information and engine maintenance logs showing compression and leak-down tests.

Many Porsche racing cars of this era suffer from maladies ranging from serious accidents to periods of neglect and unexplained holes in their histories. Poorly documented examples of the 908 are the norm, with the small number of exceptions being exemplified by 908/02-010.

This car’s factory-works and subsequent privateer history, in which it was driven by an unparalleled roster of the era’s best drivers, and in the sport’s greatest events, places it at the top of a very exclusive group. Add to this an unbroken provenance including successful racers, rabid enthusiasts, and committed collectors, and a restoration of uncommon quality, and you end up with a Porsche 908 that must rank among the finest extant.

Produced to the highest Standard

The perfect racing fix for the winter months. Come and race with FF Corse....