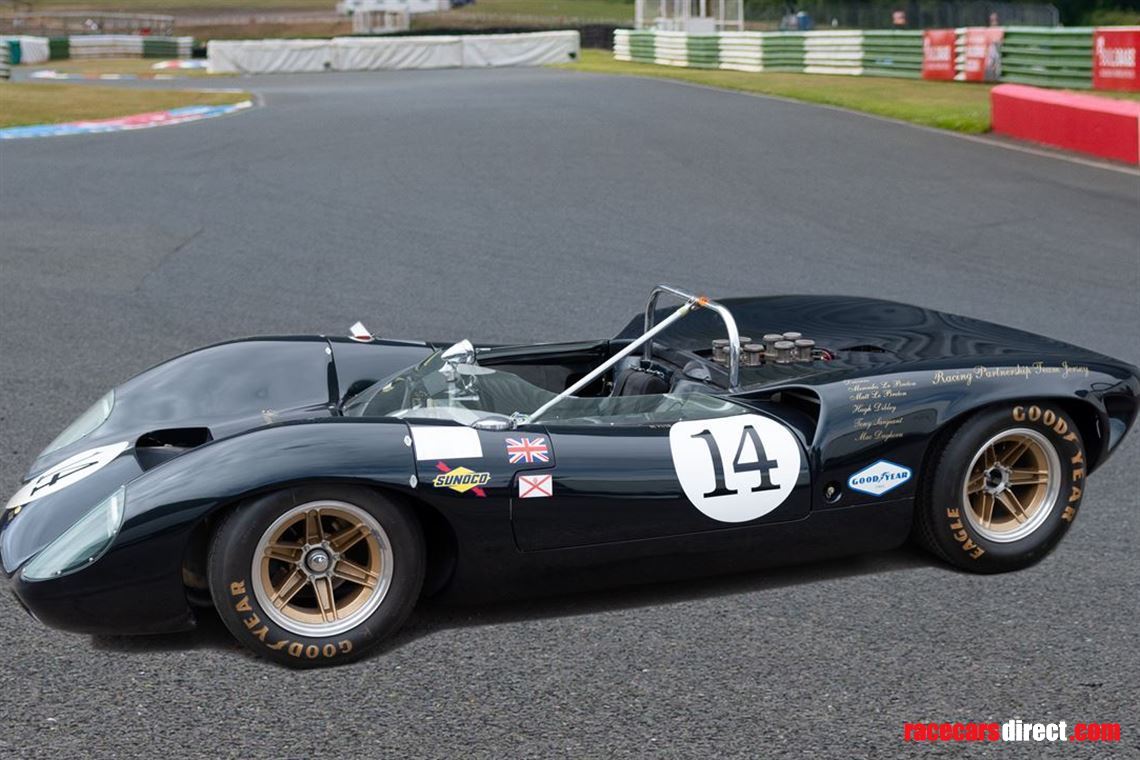 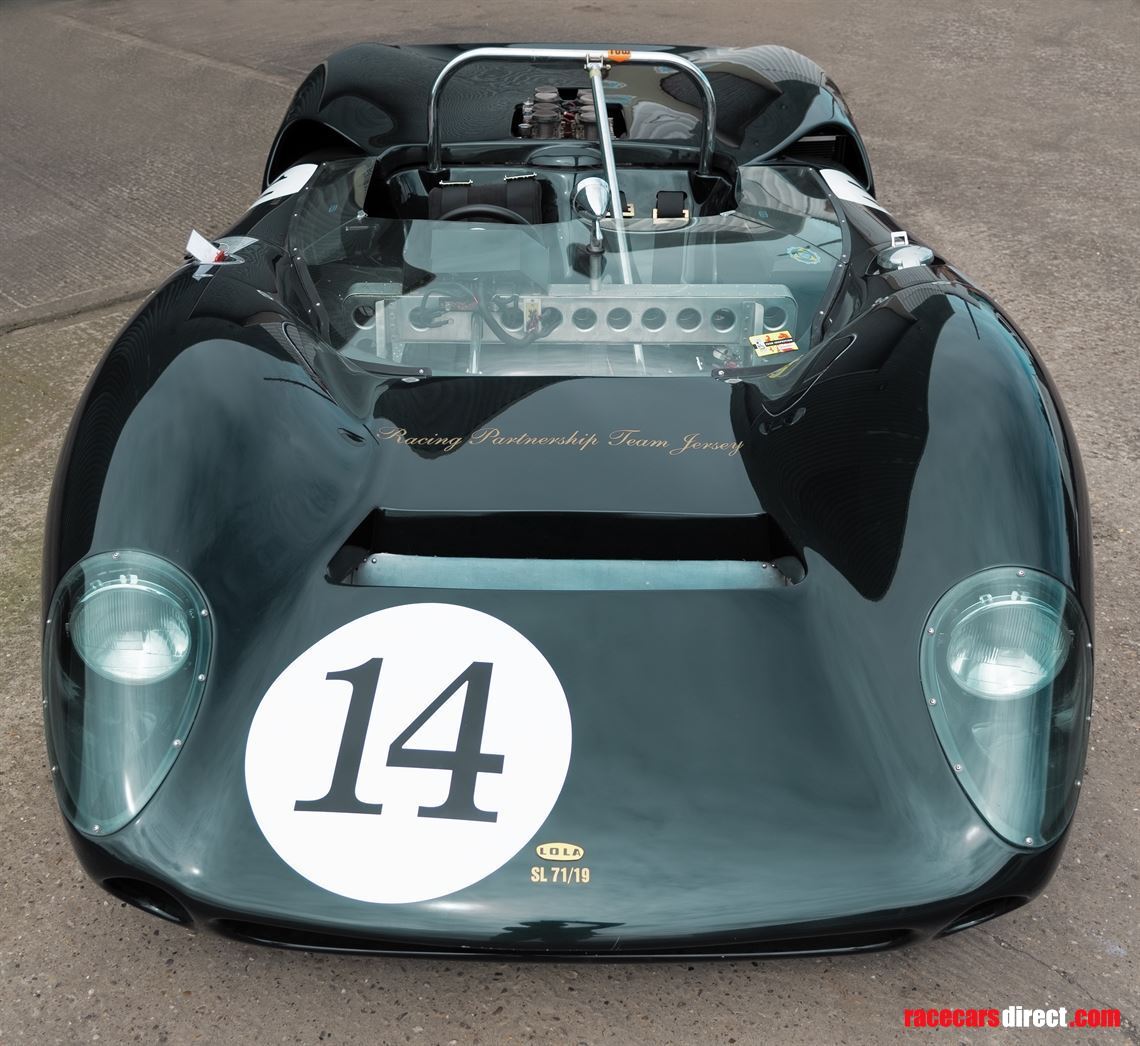 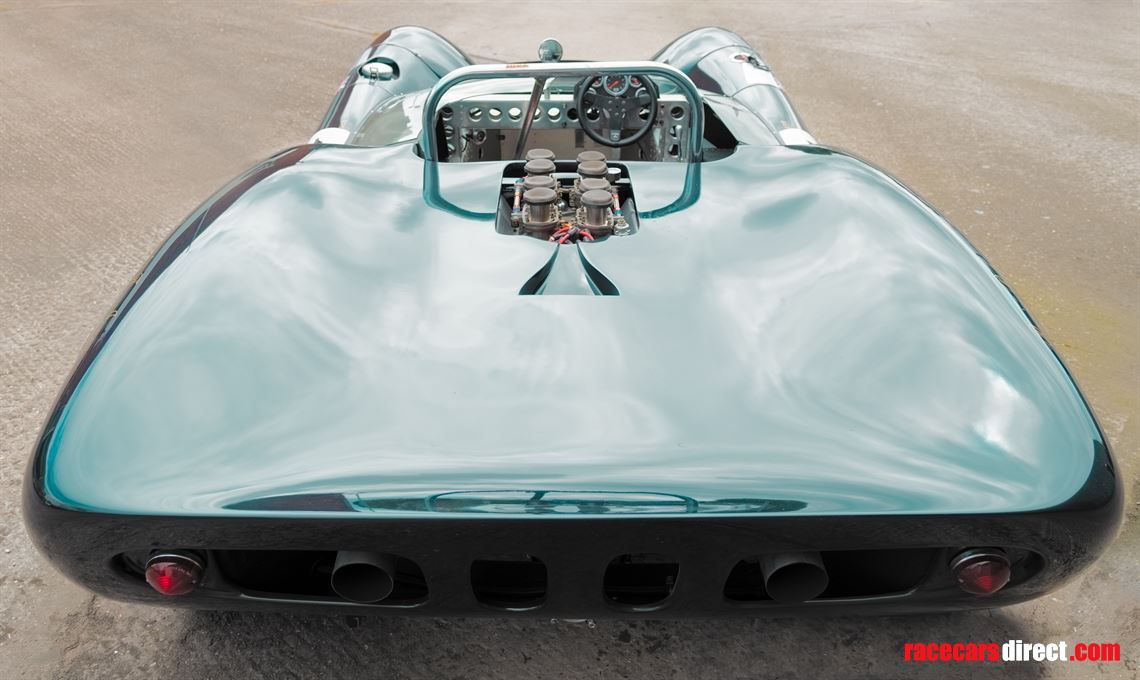 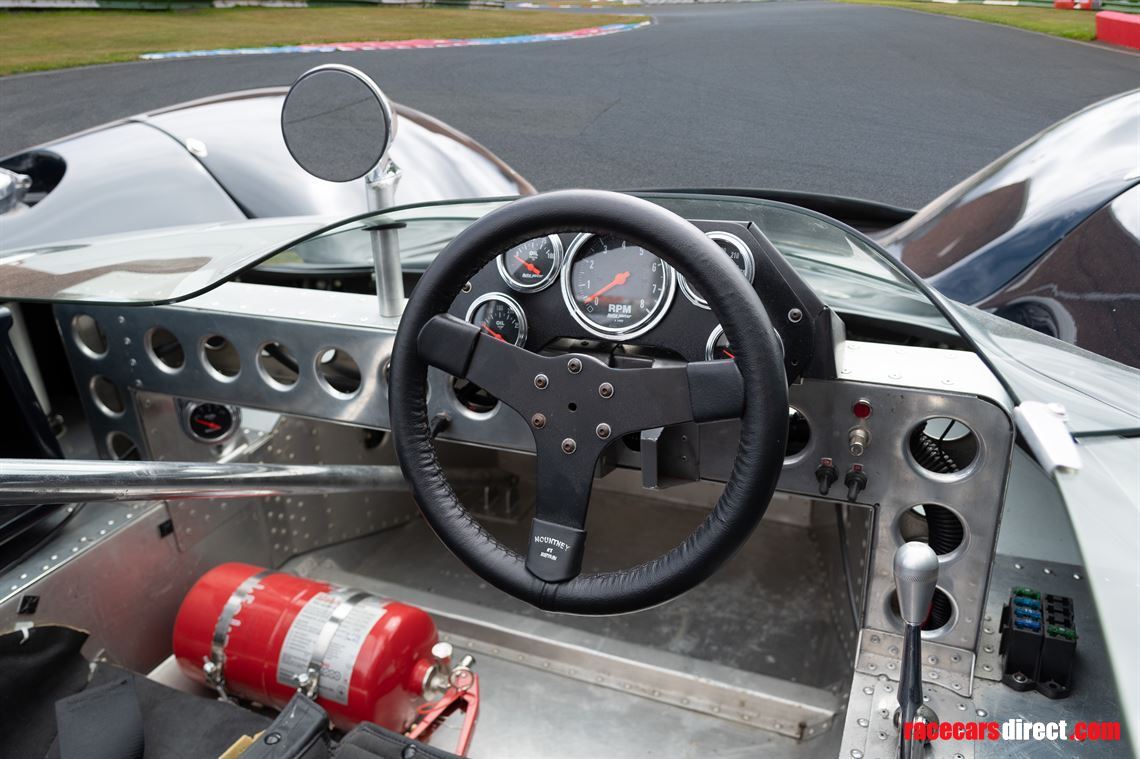 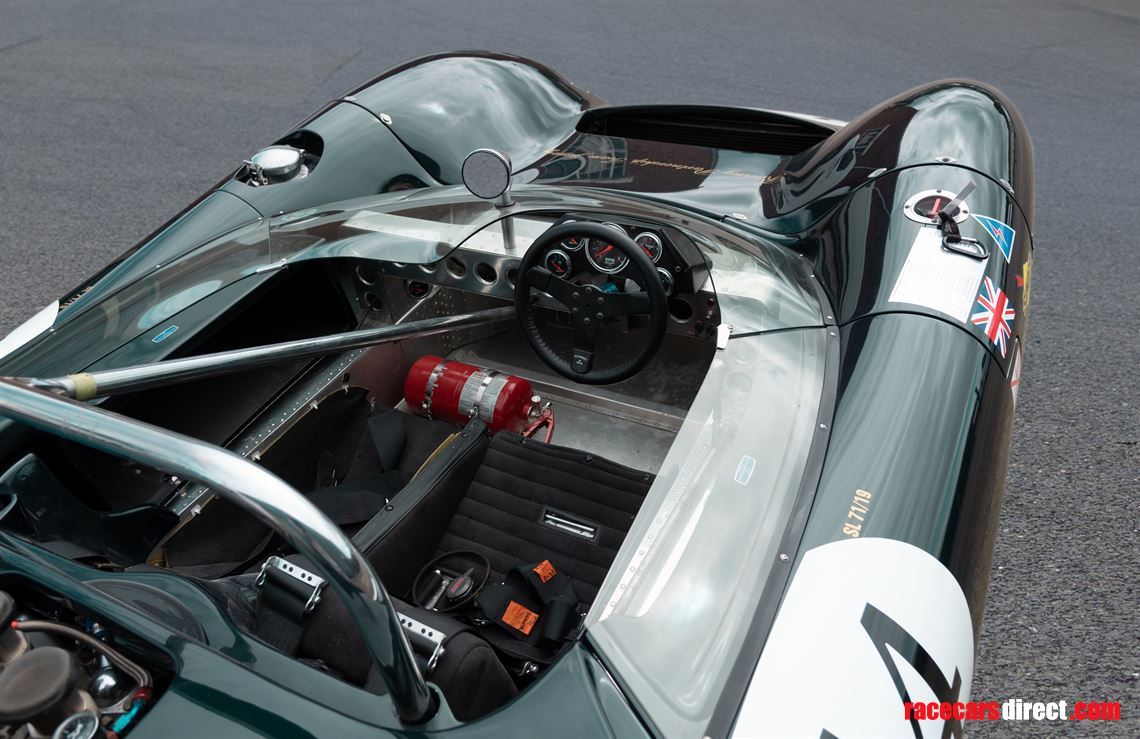 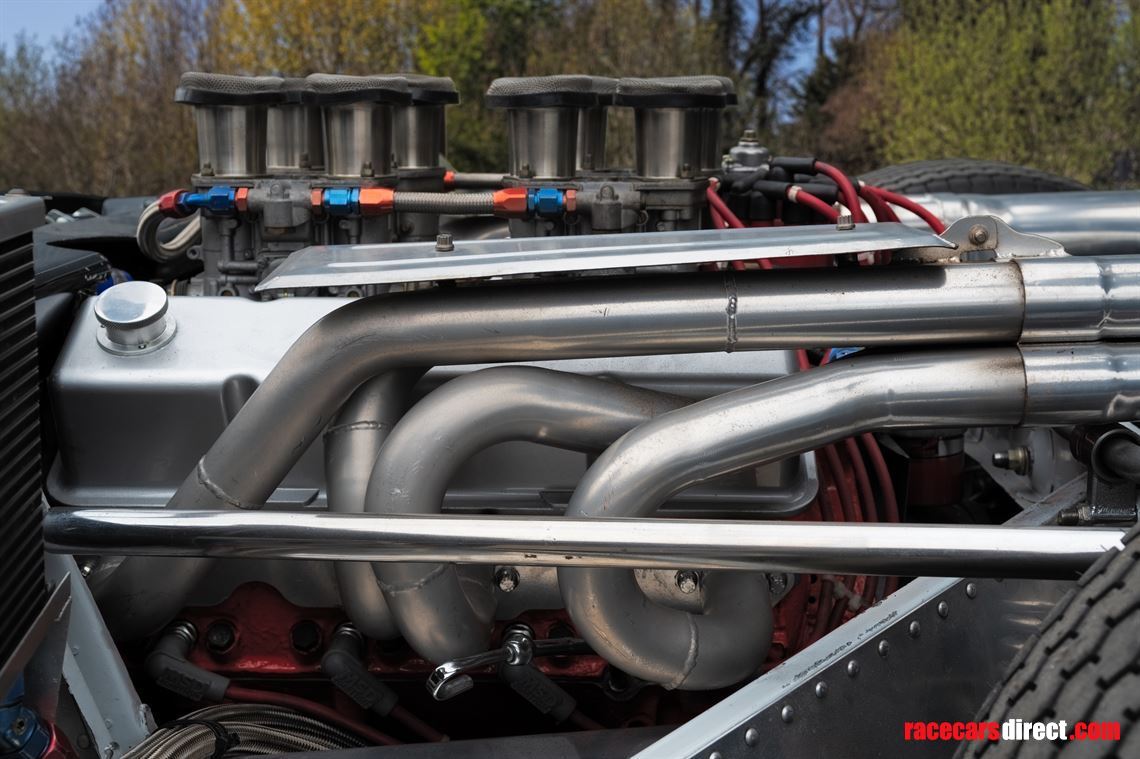 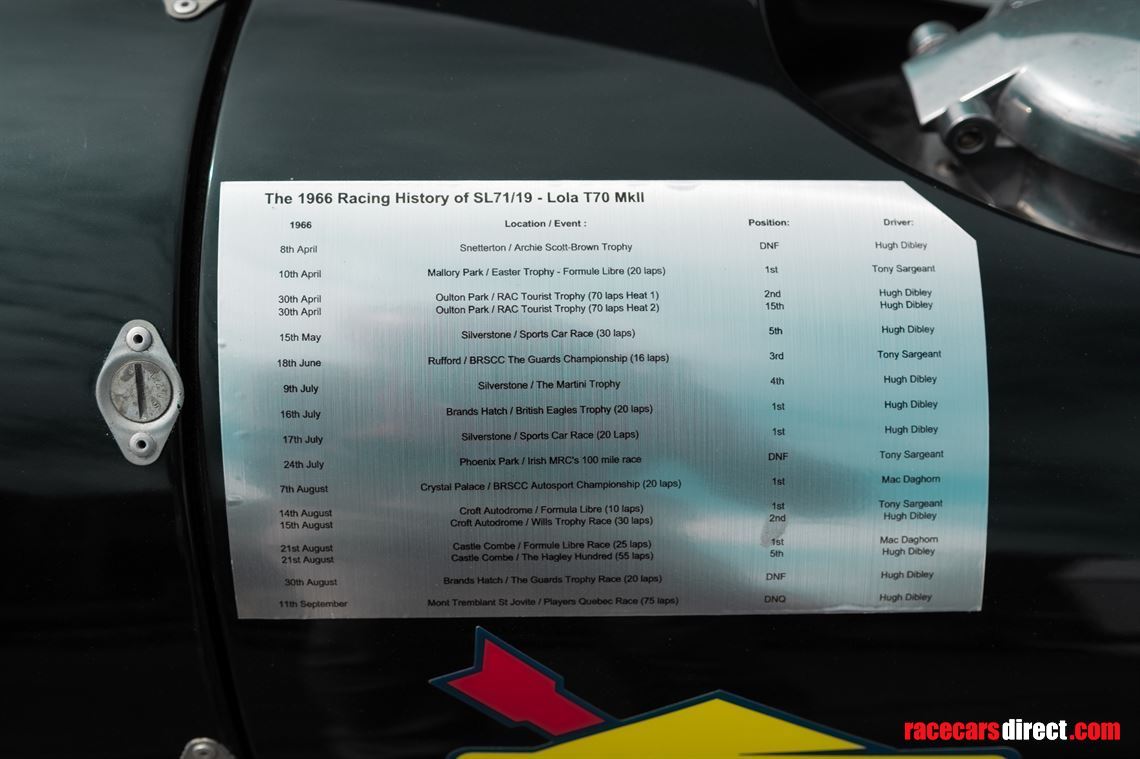 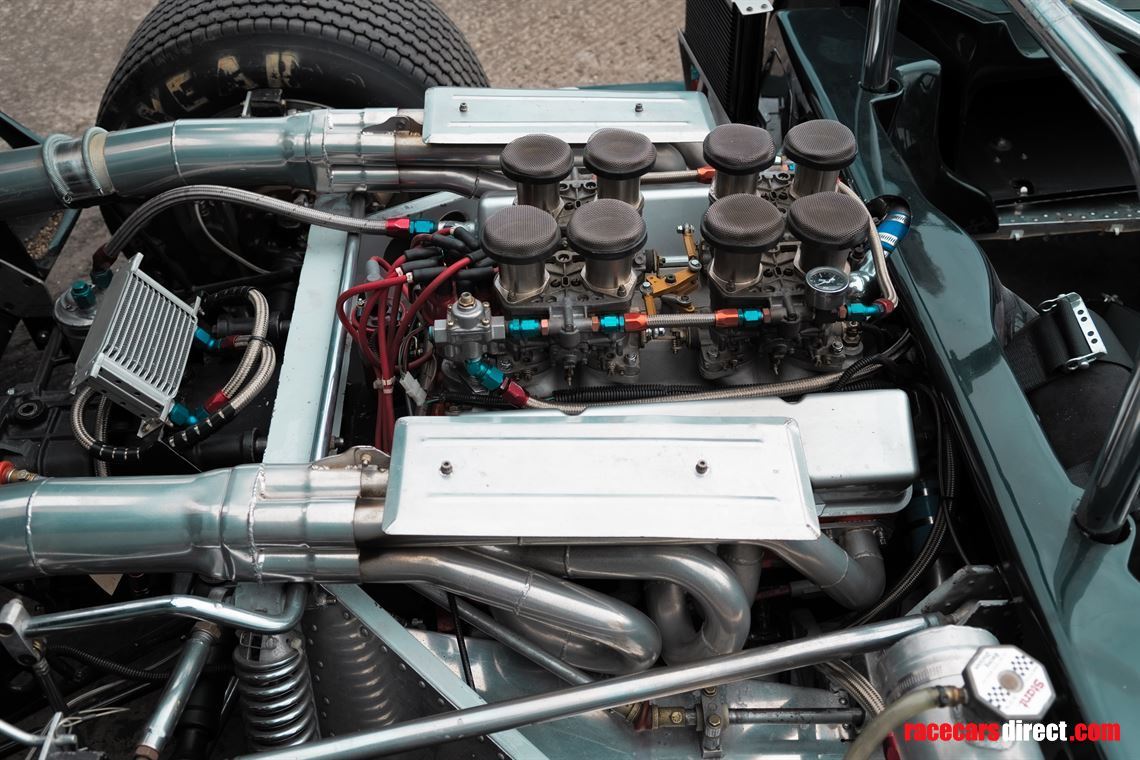 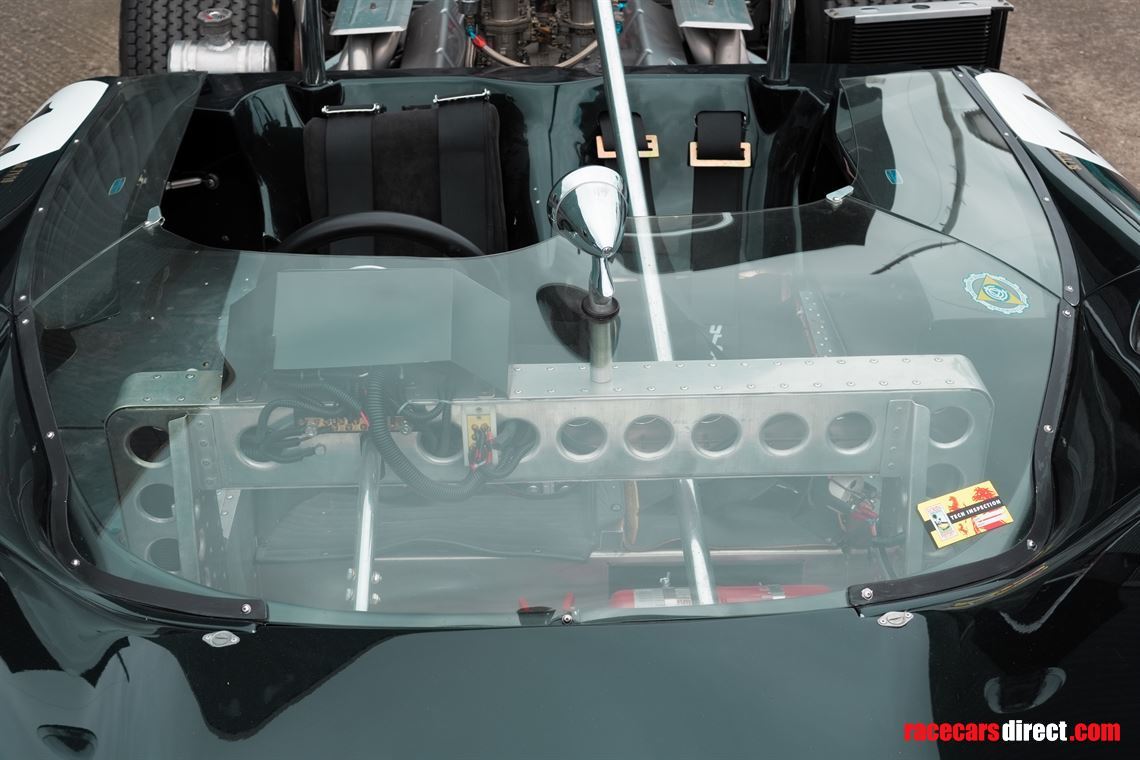 This wonderful car has had a full Engine and Gearbox rebuild and a thorough mechanical and cosmetic inspection throughout.

From humble beginnings – the prototype Mark 1 sports car emerged from a garage behind the Broadley family's tailoring shop in Bromley in 1958 – Lola Cars quickly established a winning reputation and grew to become a major force in world motorsport. Eric Broadley, his cousin Graham and Rob Rushbrook, at whose garage premises the first customer production versions were made, were the architects of the early success, which continued with a front-engined, single-seater Formula Junior, the Mk2.

Among Broadley's early projects was the Mk6 GT coupé, which had been designed to take advantage of readily available American V8 engines that offered the ideal combination of compact size and adequate performance. Lola's first monocoque design, the Mk6 GT became part of Ford's Le Mans programme in 1963, Broadley having been hired by the American company to assist with the development of what would emerge as the all-conquering GT40. At odds with his American bosses, Broadley left in 1964 and the following year, having penned a handful of Formula 2 monopostos, returned to sports cars with a new design for Group 7 racing: the T70. Effectively a 'formula libre' for sports prototypes - enclosed wheels and provision for an onboard spare were just about the only regulations - Group 7 was becoming popular on both sides of the Atlantic and the potential market for such cars looked promising.

Designed to accept American V8 engines, the T70 Spyder incorporated a full-length monocoque body tub fabricated of aluminium panels on a steel framework, the engine being bolted to the firewall bulkhead as a semi-stressed member. The suspension was conventional, boasting unequal length wishbones and coil spring/damper units all round, though the positioning of the disc brakes inboard of the wheels was an unusual feature, adopted in the interests of better cooling. Hewland's new LG500 gearbox was specified, this magnesium-cased unit having been designed specifically for use with large-capacity V8 engines. Enclosing this ensemble was one of the most beautiful bodies ever to grace a racing sports car, the glassfibre panels of which were produced by Specialised Mouldings.

John Surtees was one of the first customers for the T70, running what in effect was a 'semi-works' team in 1965. Traco-prepared Chevrolet V8s were used, a 5.0-litre unit at first and then from mid-season a 5.9. A Mk2 version of the T70 became available before the end of the '65 season, Broadley taking advantage of the forthcoming deletion of the 'spare wheel' requirement to redesign the nose, replacing the original twin radiators with a large single unit while incorporating a host of detail improvements to both chassis and suspension. The result was a significantly quicker car, which in prototype form was driven to a convincing victory by Surtees in the Guards International Trophy at Brands Hatch on the August bank holiday weekend. Surtees then wrote off the prototype Mk2 at Mosport Park in Canada following a suspension failure, sustaining injuries that put him out for the rest of the season.

He bounced back in 1966, winning three of the inaugural Can-Am Championship's six races for Lola and defeating rivals McLaren and Chaparral in the process. Privately entered T70s won two of the other races making it a magnificent five out of six for Lola. Surtees' success capped what had been a tremendous year for the British manufacturer in North America, Graham Hill already having won the celebrated Indianapolis 500 in a T90.

Although the works McLarens would dominate Can-Am for the next five years, the Lola T70 remained a popular choice for privateers, among whom it was rated as the sweetest handling of the customer cars. Given its Can-Am origins, it is not surprising that the long-serving T70 family of sports cars was better suited to sprint events, yet against the odds a Mk3B coupé entered by Roger Penske lasted the distance to win the coveted Daytona 24 Hours endurance classic in 1969.

Chassis number 'SL71/19' was delivered new to Tony Sargeant in December 1965 to be campaigned by Sargeant, Hugh Dibley and Mac Daghorn under the Racing Partnerships (Jersey) banner. The trio's intention was to compete in Group 7 and Can-Am races in the UK and North America. The Lola was red at this time and usually carried competitor number '53'. Competition was fierce in this class of racing in the mid-1960s, with many established Formula 1 stars crossing swords with sports car specialists. 'SL71/19' regularly lined up on the grid alongside the likes of Jim Clark, Graham Hill, John Surtees, Bruce McLaren, Denny Hulme, Richard Attwood, Chris Amon, Jacky Ickx, Innes Ireland, Brian Redman, Mike Parkes, David Piper, Frank Gardner and Peter Gethin. Given the strength of the opposition, the Racing Partnership's results for 1966 are truly impressive, with Sargeant achieving two 1st places and one 3rd; Dibley one 1st, two 2nd places, one 4th, and two 5th places; and Daghorn one 1st (full results list available).

Unfortunately, the Racing Partnership's season did not end well, as Dibley crashed 'SL71/19' heavily during qualifying at St Jovite, Canada in September, damaging the chassis. The Lola took no further part in the event and was transported from Canada to Florida, USA where it remained until renowned marque specialist Mac McClendon purchased it in 1975. After many years McClendon rebuilt the car, complete with a 1963 Chevrolet V8 engine, replacement chassis, and other parts for Norwegian enthusiast Fred Larsen.

Subsequently the Lola's original owner, Tony Sargeant, repurchased the car. Interviewed for an online feature, he recalled: "It was everything I wanted it to be. It had a Ford V8 engine. It was not very competitive initially but it was a beautiful car to drive. Whatever you wanted it to do it did it. It was always very smooth and easy on the track". Sargeant went on to say that he had bought the rebuilt Lola from a collector in California, and recalled his emotions when the car returned home: "Absolutely indescribable really. It was the most exciting feeling when the car landed on the dock and emerged from the container. The only thing was, the car was blue! It had always been red when we raced it. Later, I did manage to drive it in the Jersey Sprints. It was a bit of a squeeze to get in it but we managed. To me it was still an absolutely perfect car."

Brand new Radical SR10 ready to race across the globe or the 'Ultimate trackday' toy, you decide!

Available for exclusive hire for Track Days throughout the UK and Europe.....