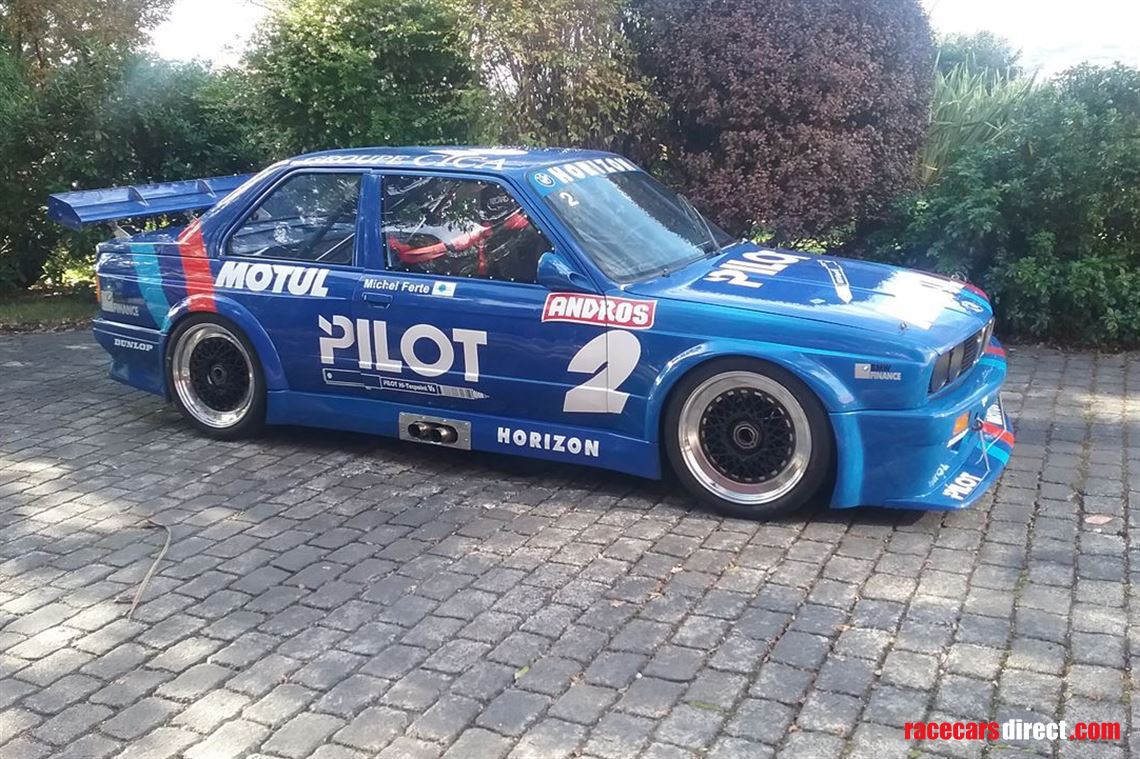 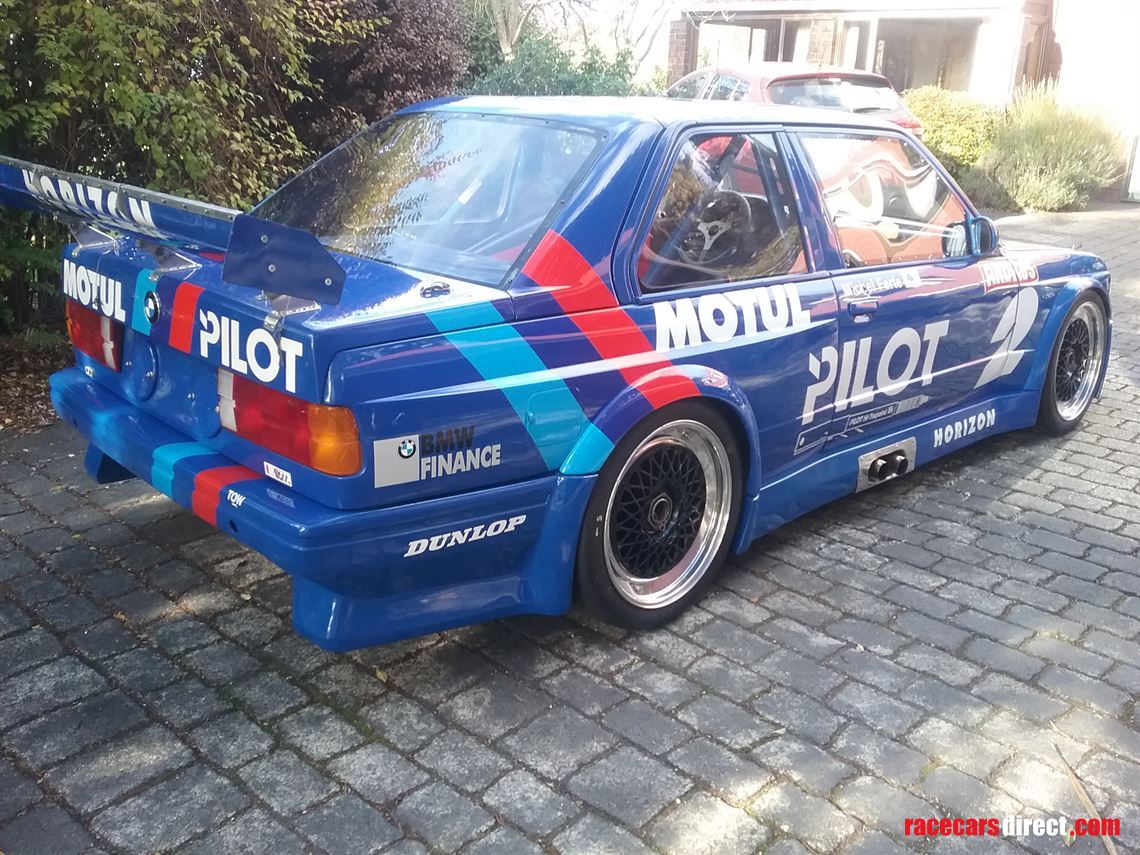 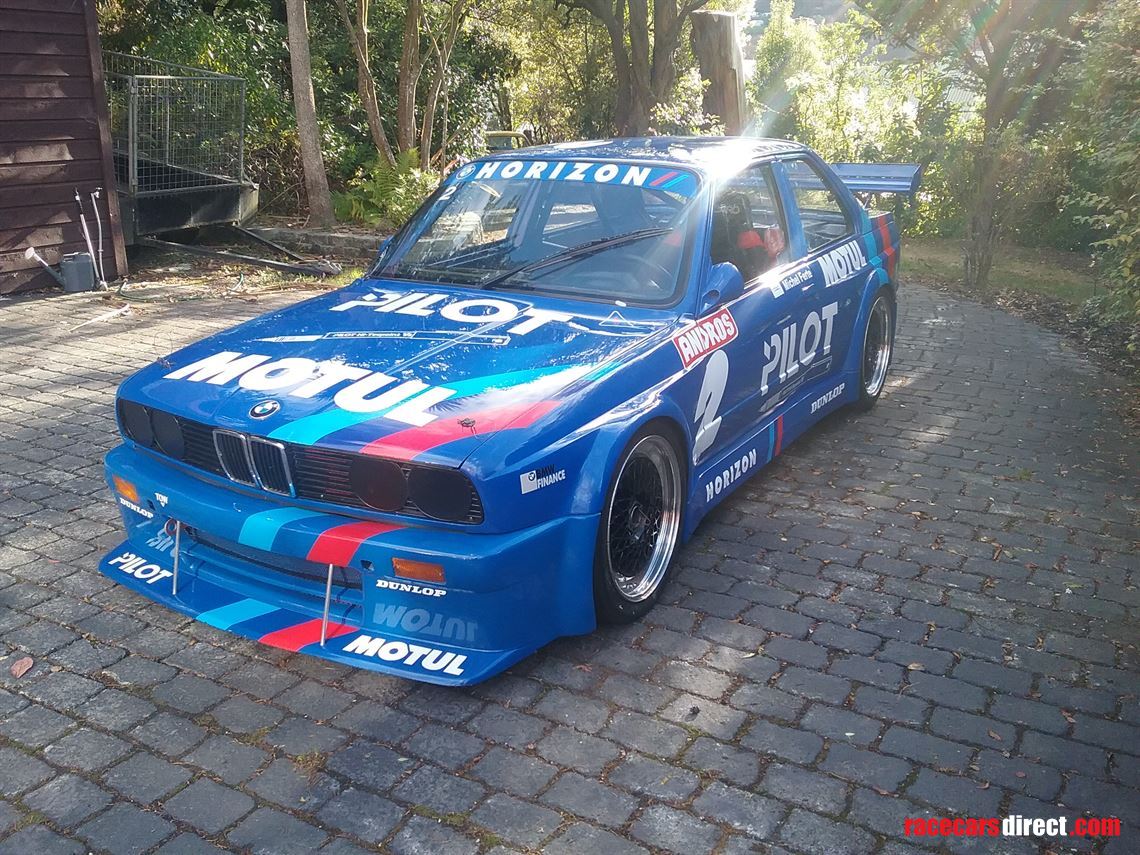 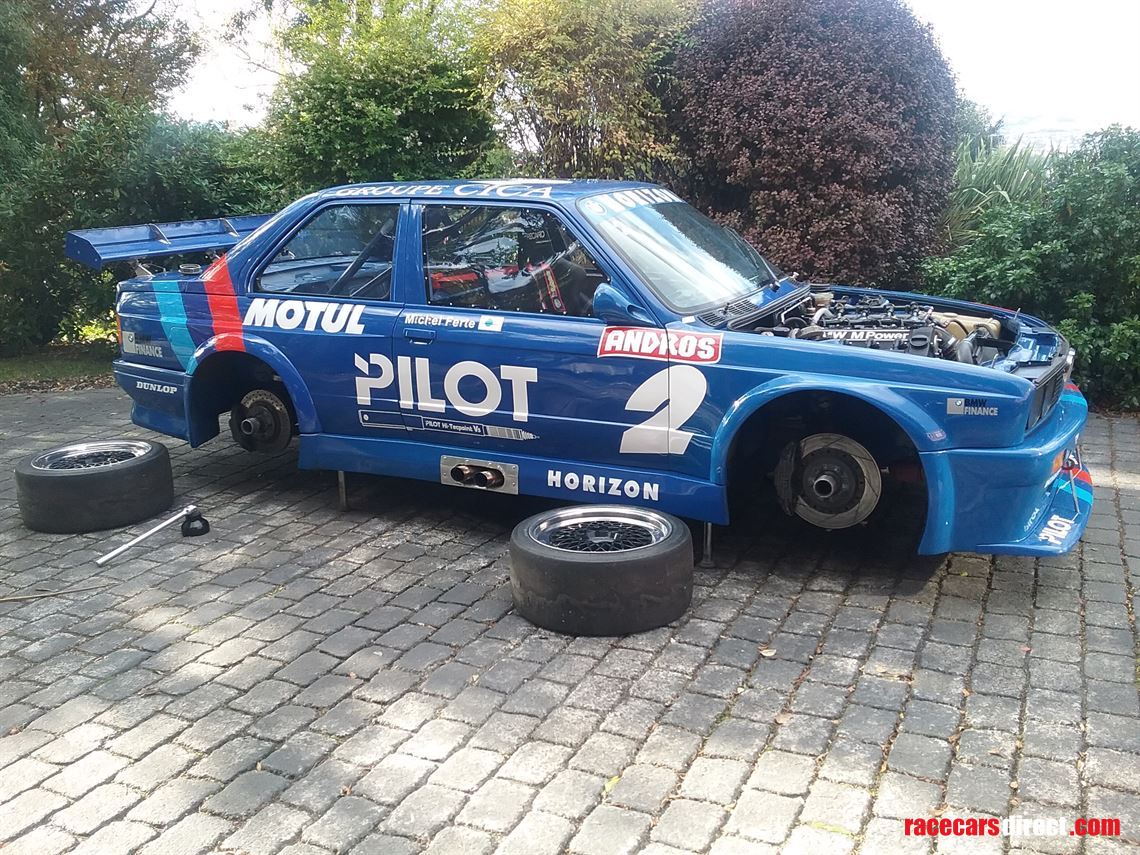 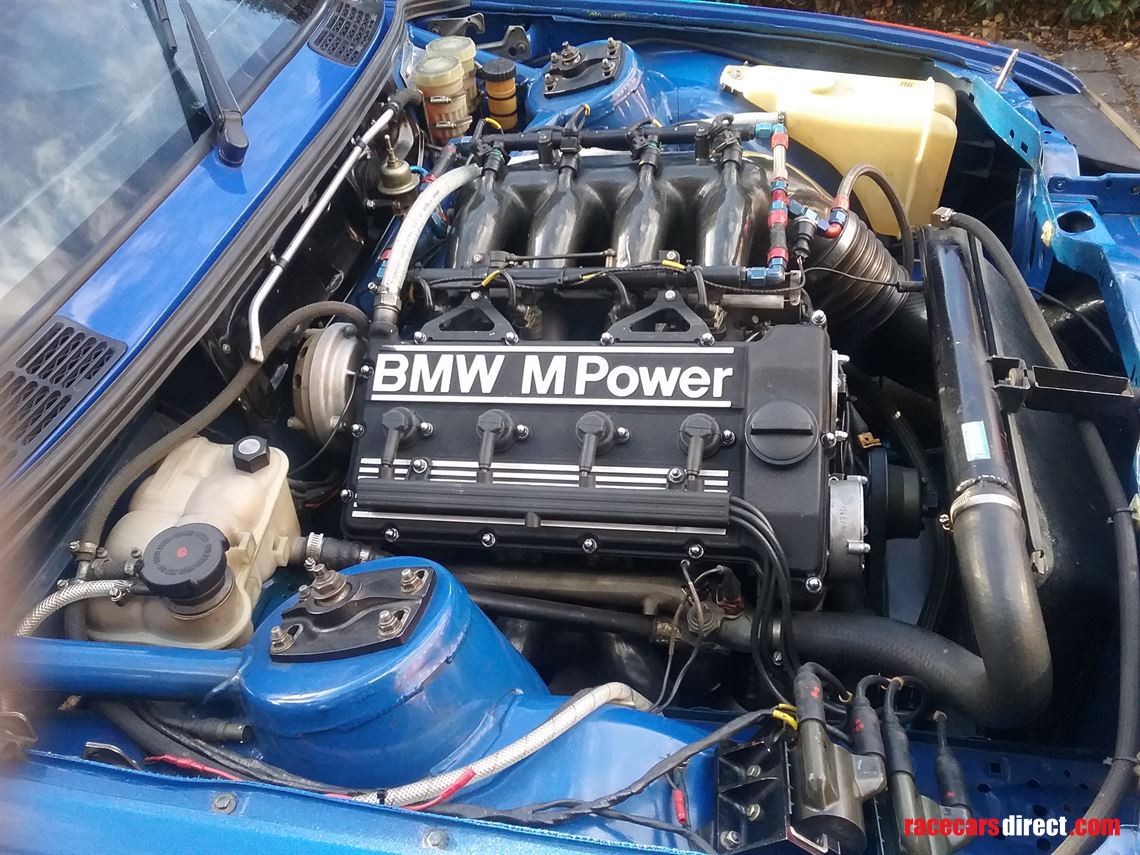 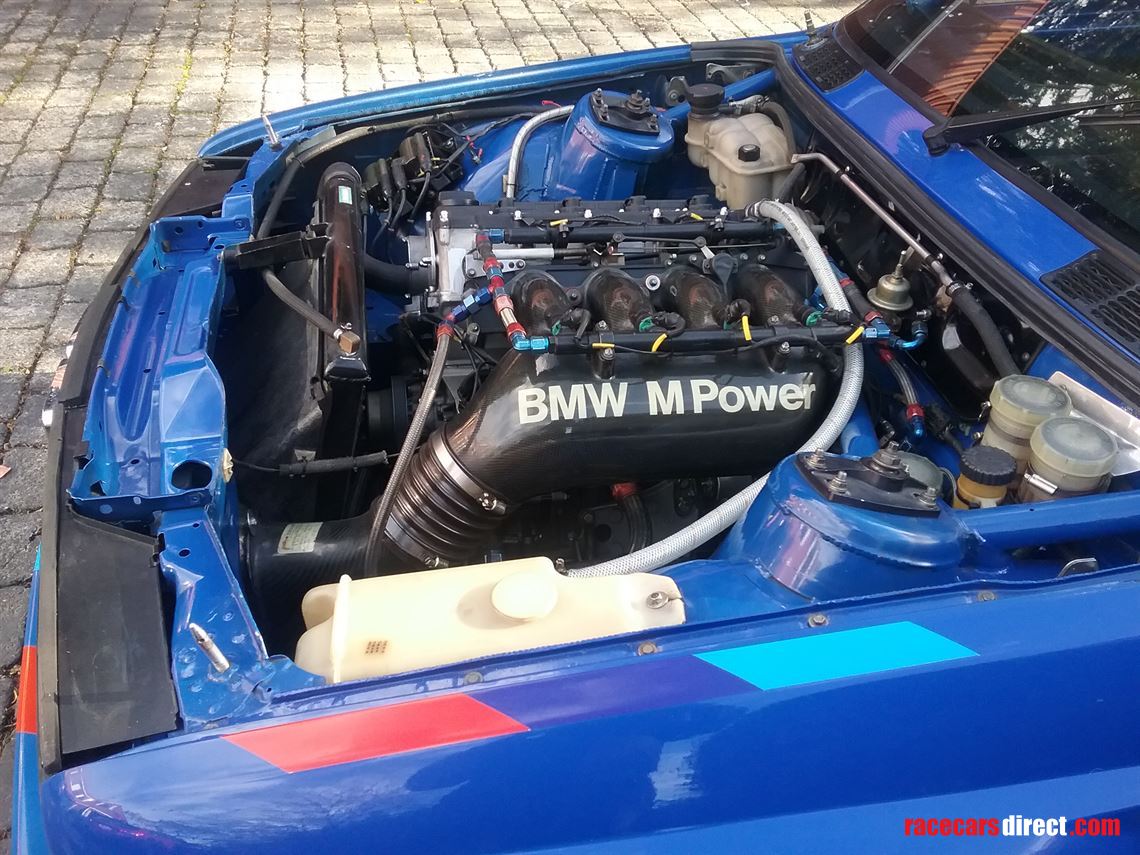 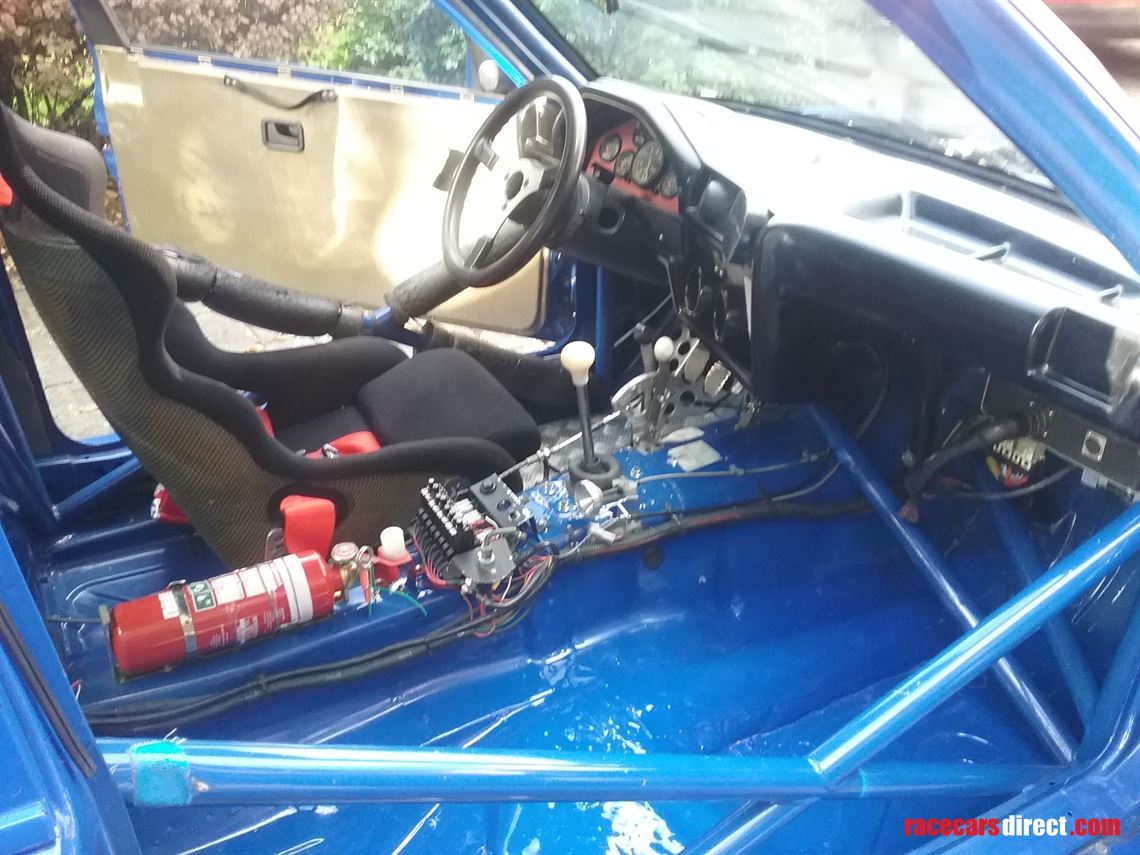 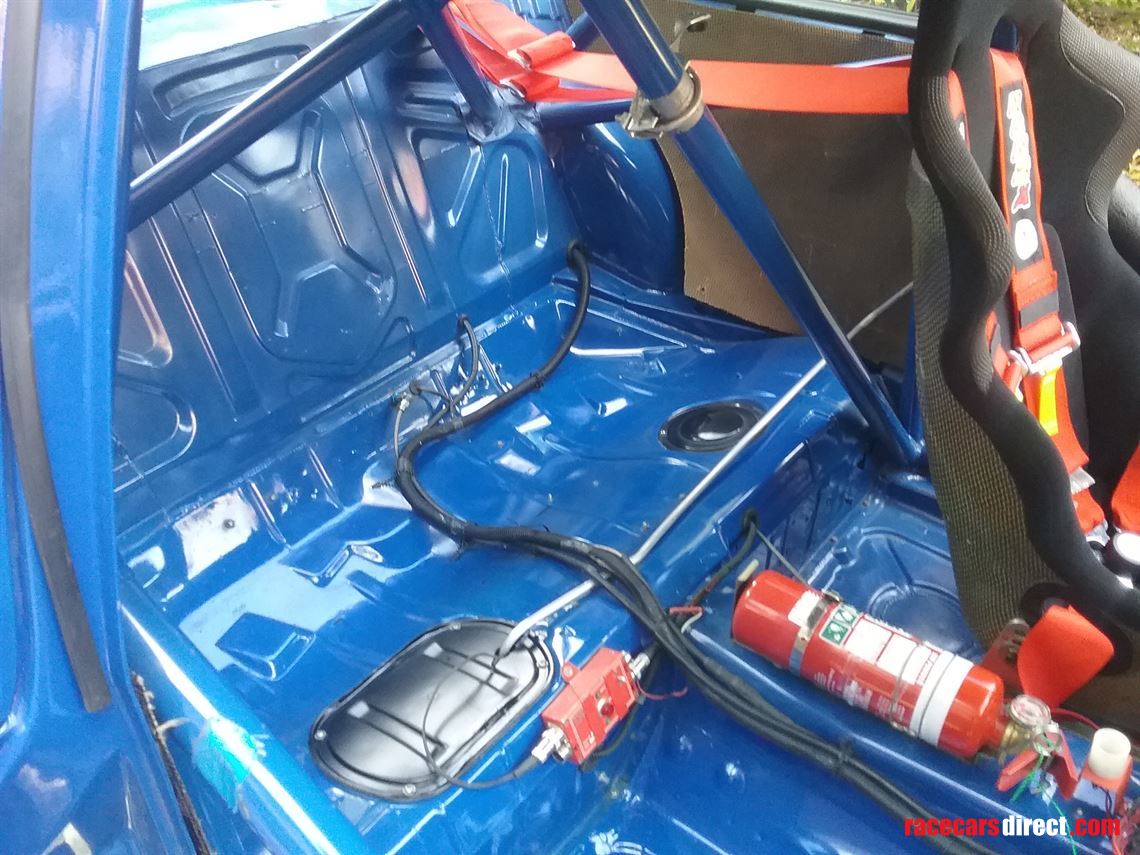 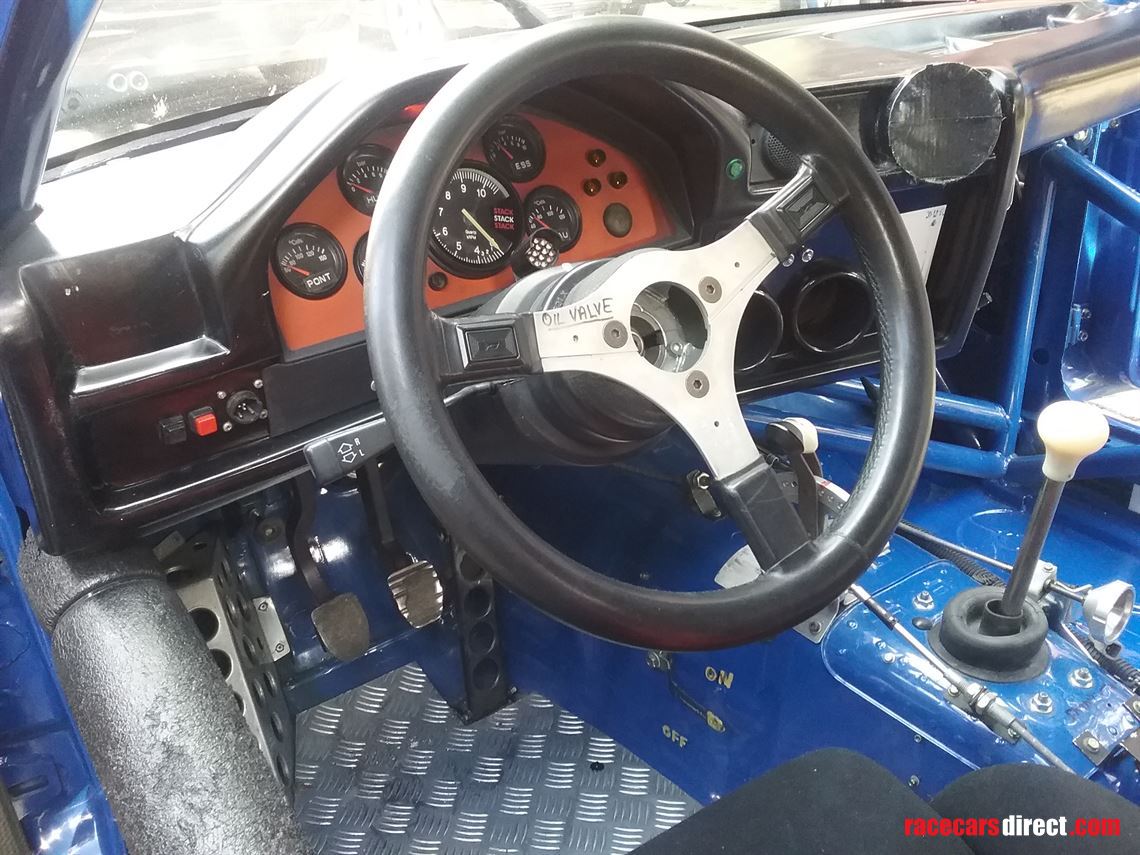 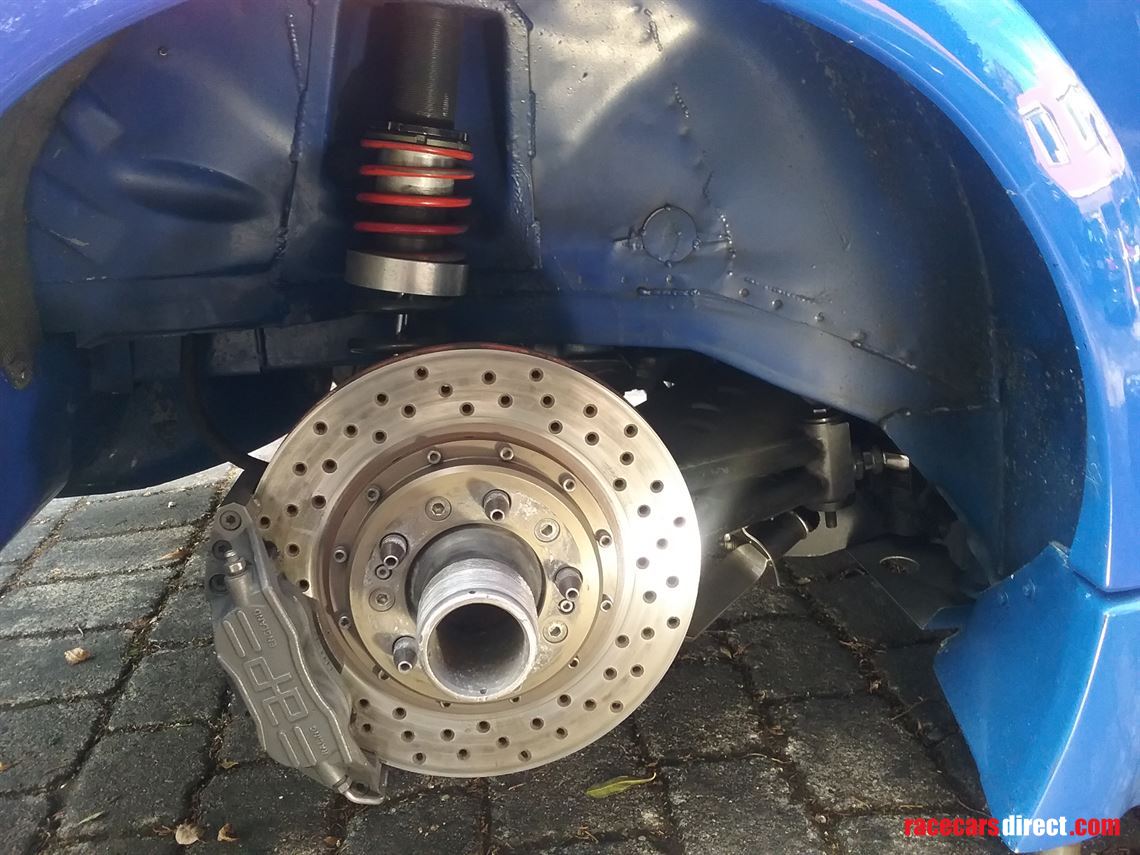 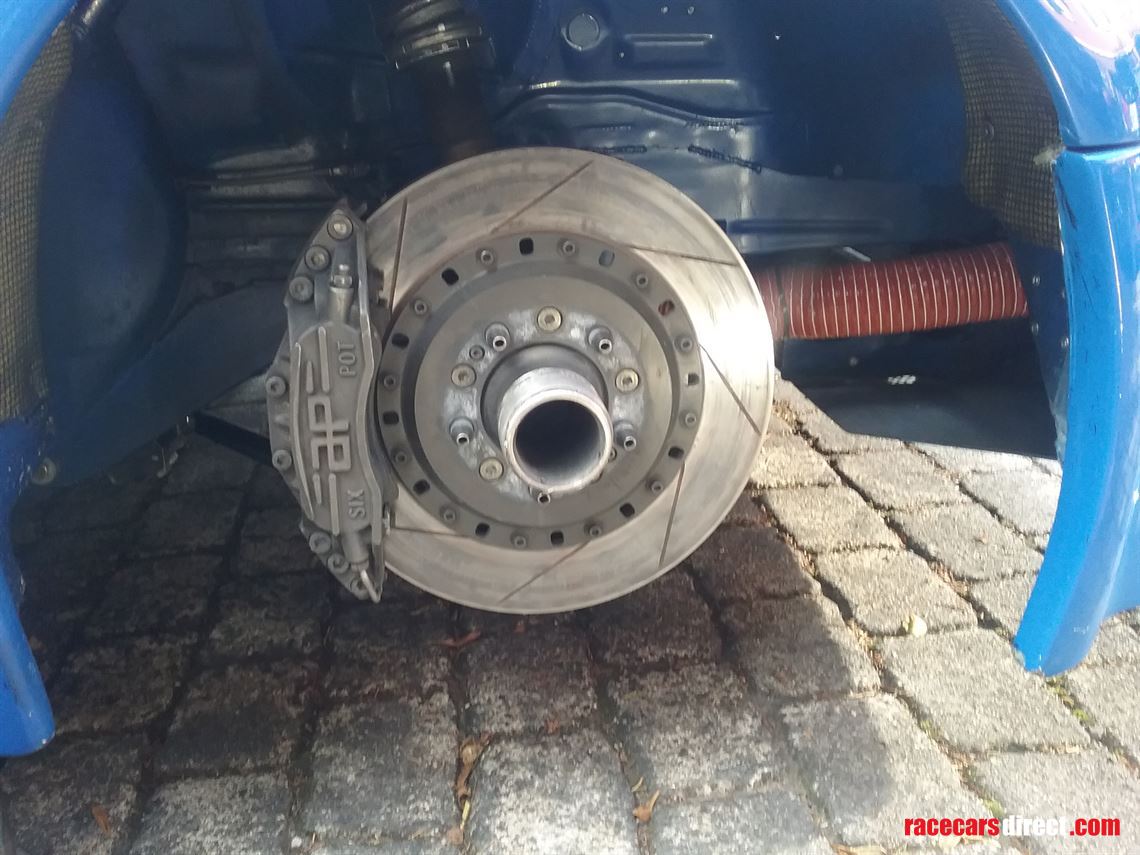 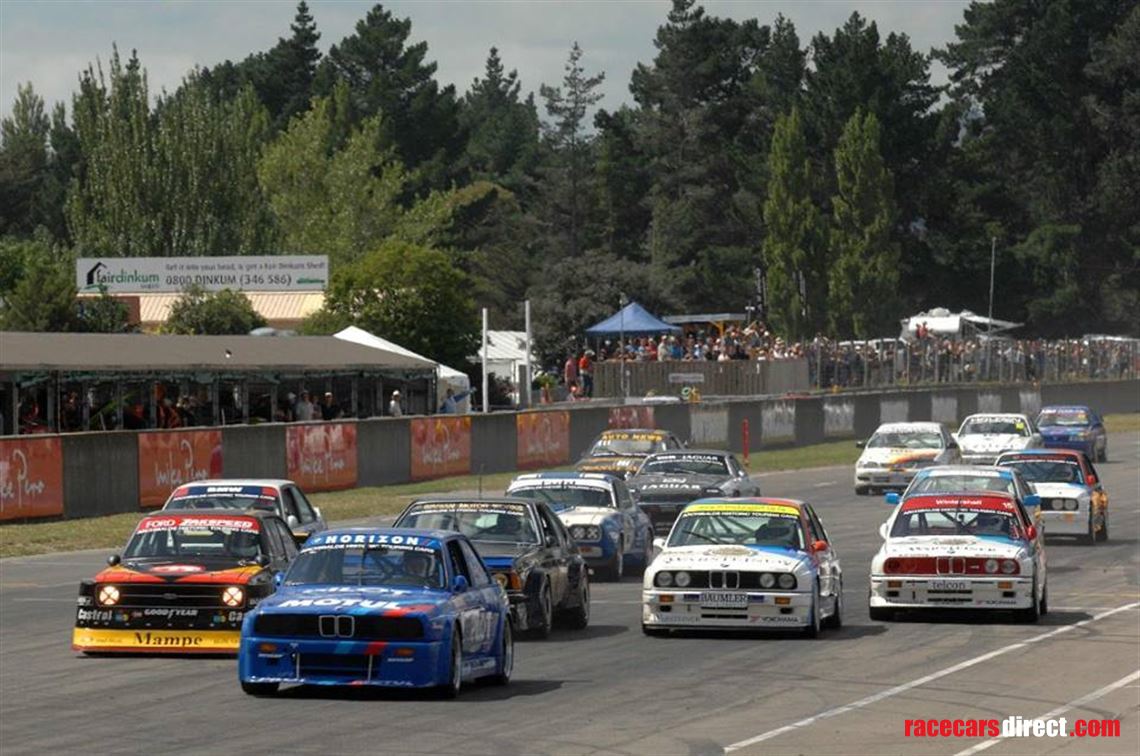 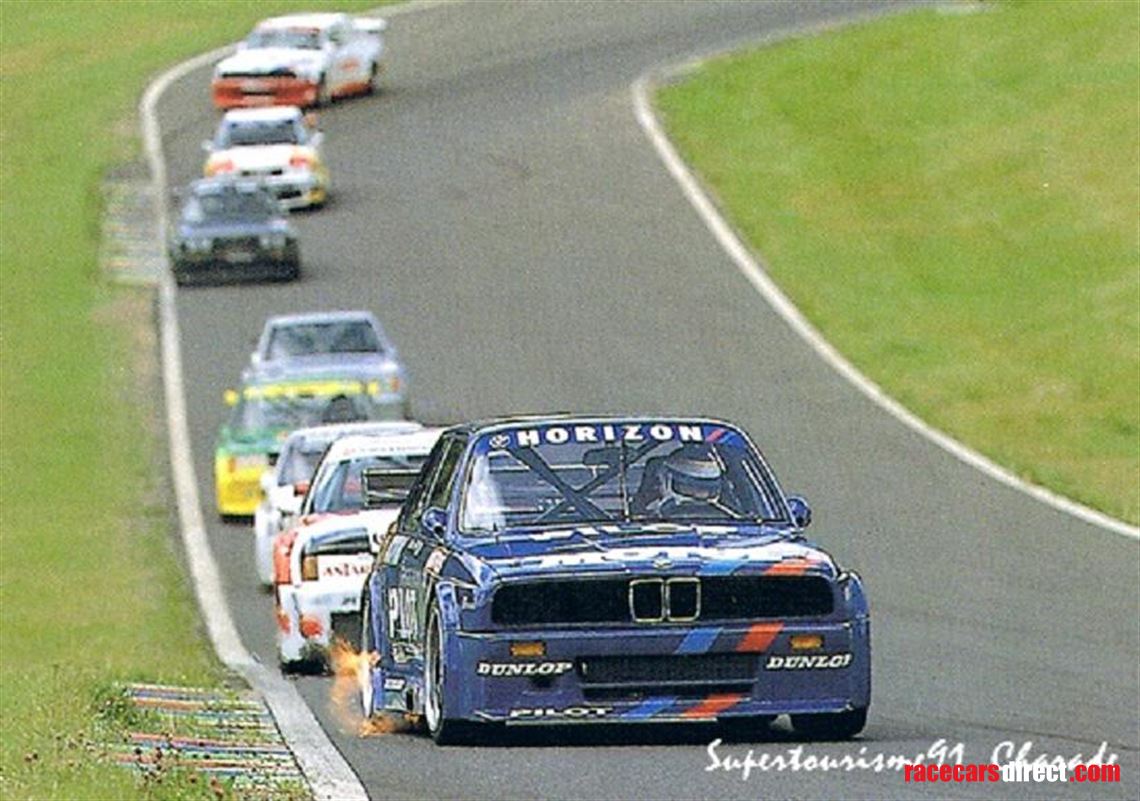 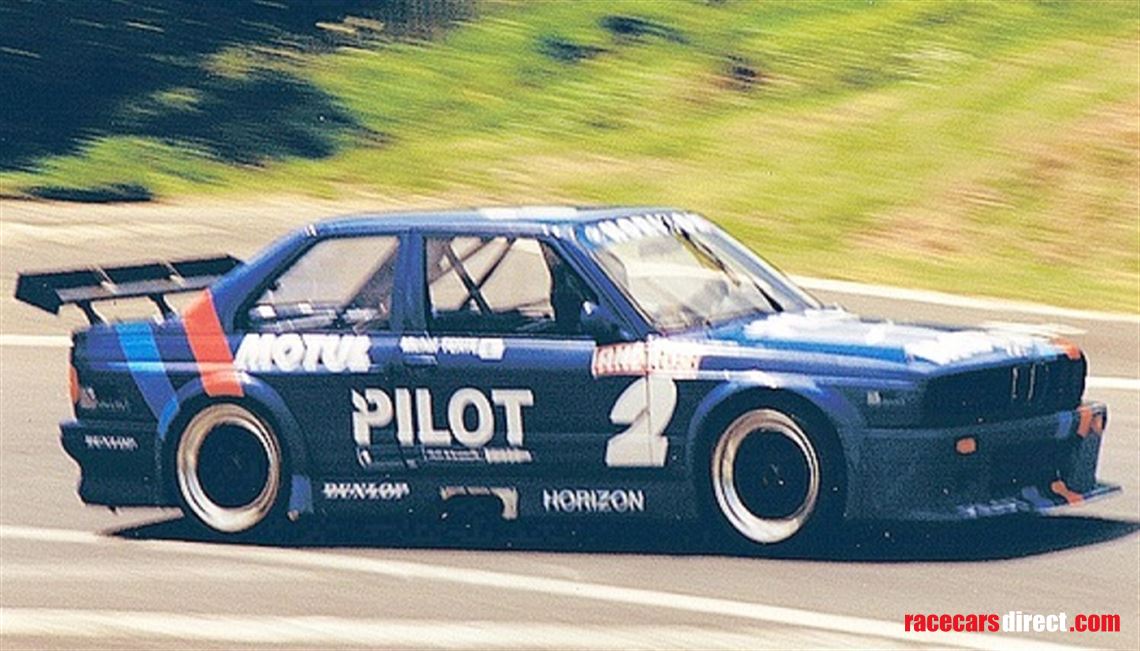 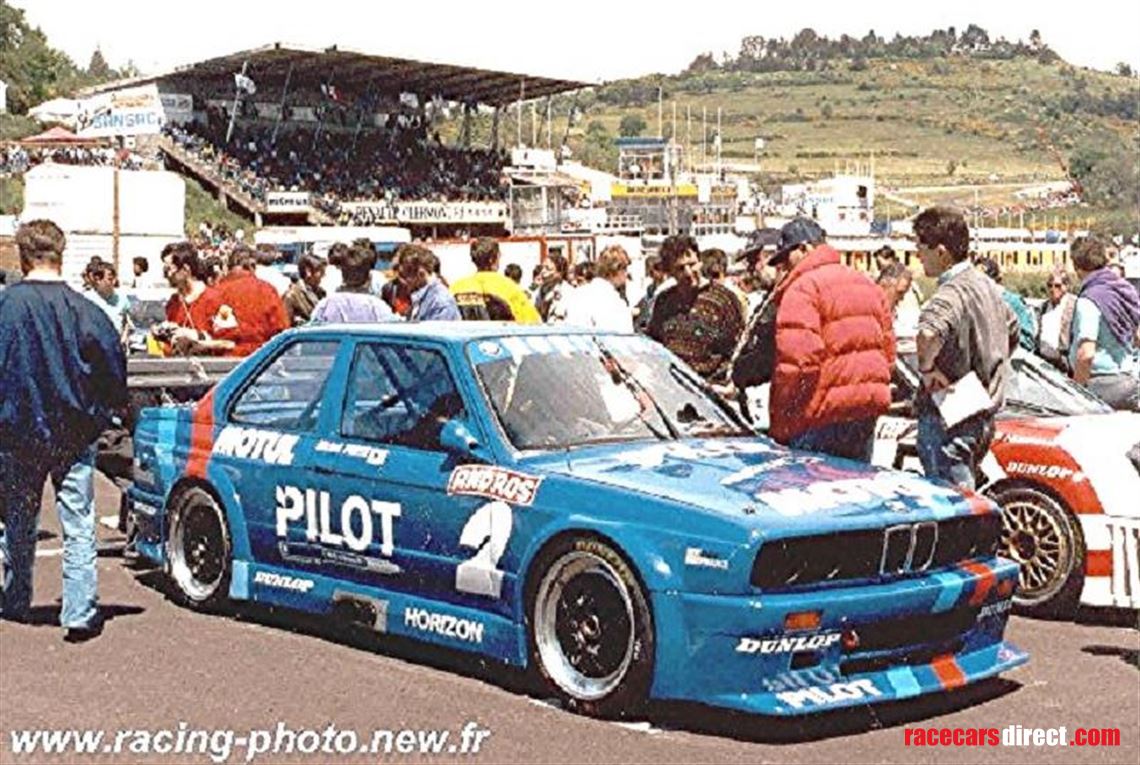 Offered here for sale is a very rare and unique French Super Tourism BMW Sport Evo. One of four identically constructed cars built by Garage Mirabeau on behalf of BMW France to contest the French Touring Car Championship. This car competed in 1990 and 1991, driven principally by European Formula 3 champion and Ligier F1 test driver Michelle Ferte, and on occasion by Formula 1 driver, Jaques Laffite.  Sponsorship was from BMW, Motul Oil, and Pilot and the team was run by Horizon Garage. In 1990 the car finished the championship in 2nd place to it’s sister car driven by J P Malcher, and in 1991, in 5th place. At the end of the 1991 season the car was sold to a French collector, and remained unused until 2007, when I purchased the car and recommissioned it to race in Historic Racing in New Zealand. The car has proven to be extremely competitive and very reliable and has achieved a number of class lap records and many race wins. I stopped racing this car in 2017 due to the purchase of a Super Tourer. The car is as it finished its last race, where it again took the class lap record.

Although this car is very similar to the German DTM Touring M3s, it differs in a number of areas.

The engine has a displacement of 2.7 litres, and is dry sumped, the BBS wheels are slightly wider with larger section 18” tyres, flare extensions on the guards, and a different front and rear spoiler.

Chassis/Bodywork This is chassis chassis number 177. The chassis and bodywork are in excellent  condition and as originally built by Matter and Garage Mirabeau. The bonnet, front guards, lower front and rear panels, cills, rear flares and passenger door are all manufactured from Kevlar, the rest of the bodywork being steel. Weight without driver is approximately 950 kgs. The interior is as per period with all the original gauges still functioning.  There are still a number of the original scrutineering stickers from the French circuits that the car competed at, on the roll cage. The car is fitted with its original on board air jack system.

A range of spares is available with the car including the original steel passenger door, 3 sets of cills, 1 rear bumper panel, 2 bumper panels, 2 splitters, 3 front guards, 3 grille panels and 2 sets of BBS centre lock wheels as well as sundry other spares required to run the car.

The car has a NZ Motorsport Log Book, Historical Technical Passport and will come with copies of BMW Motorsport Parts and repair manuals, as well as all the information I have collected during my years of ownership. This car is a very original example of the famous BMW M3 Sport Evo that has been kept as close to period as possible, and will again be ready to compete in Historic Race events with a minimum of preparation.

Ready for sprint and endurance races