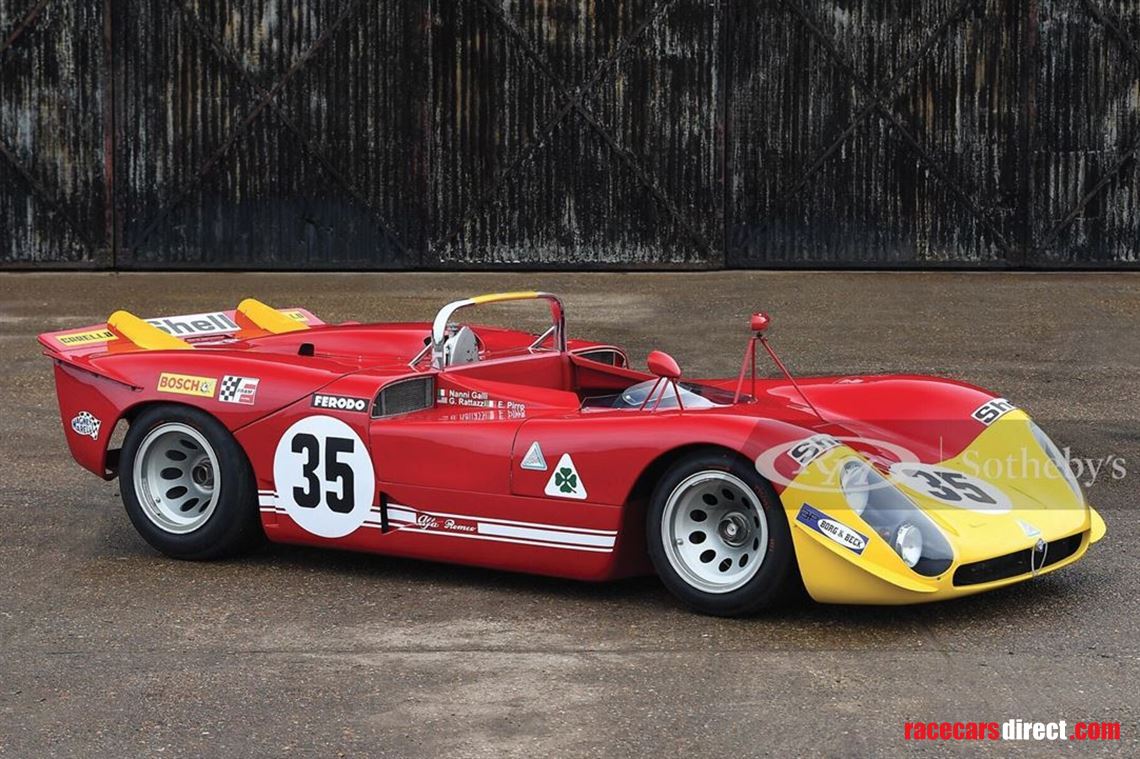 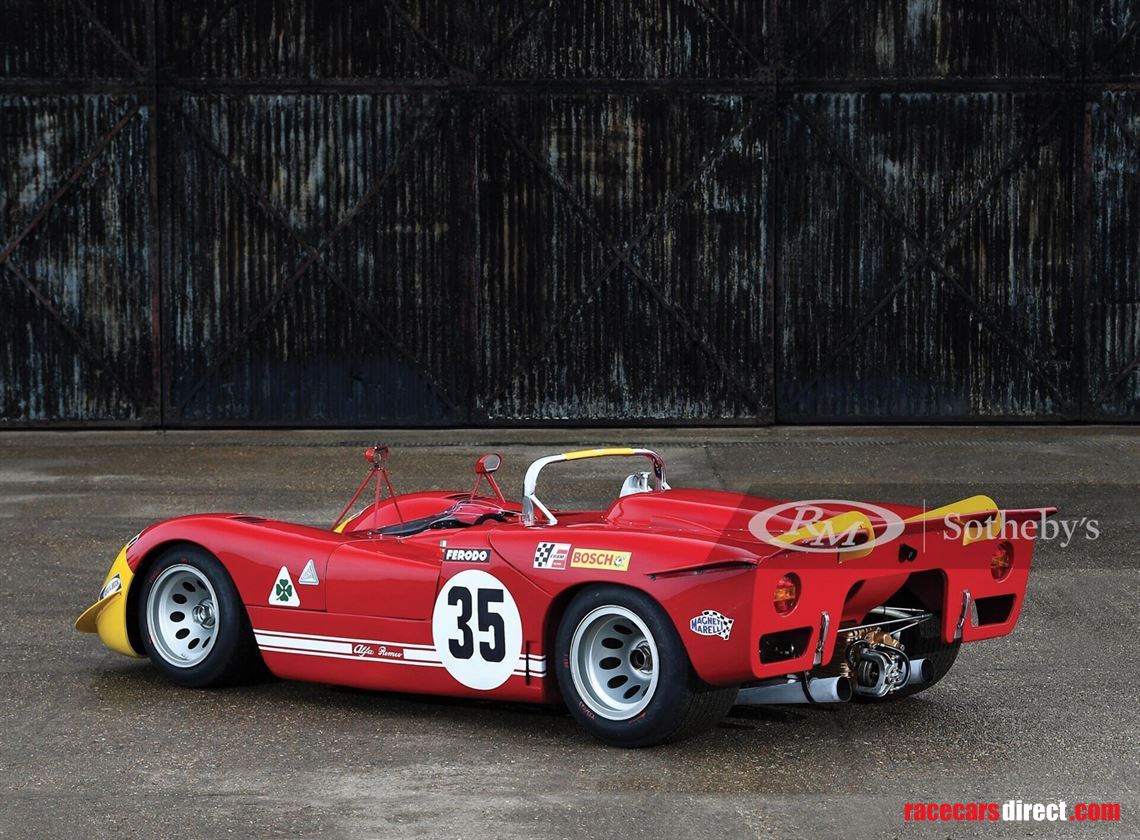 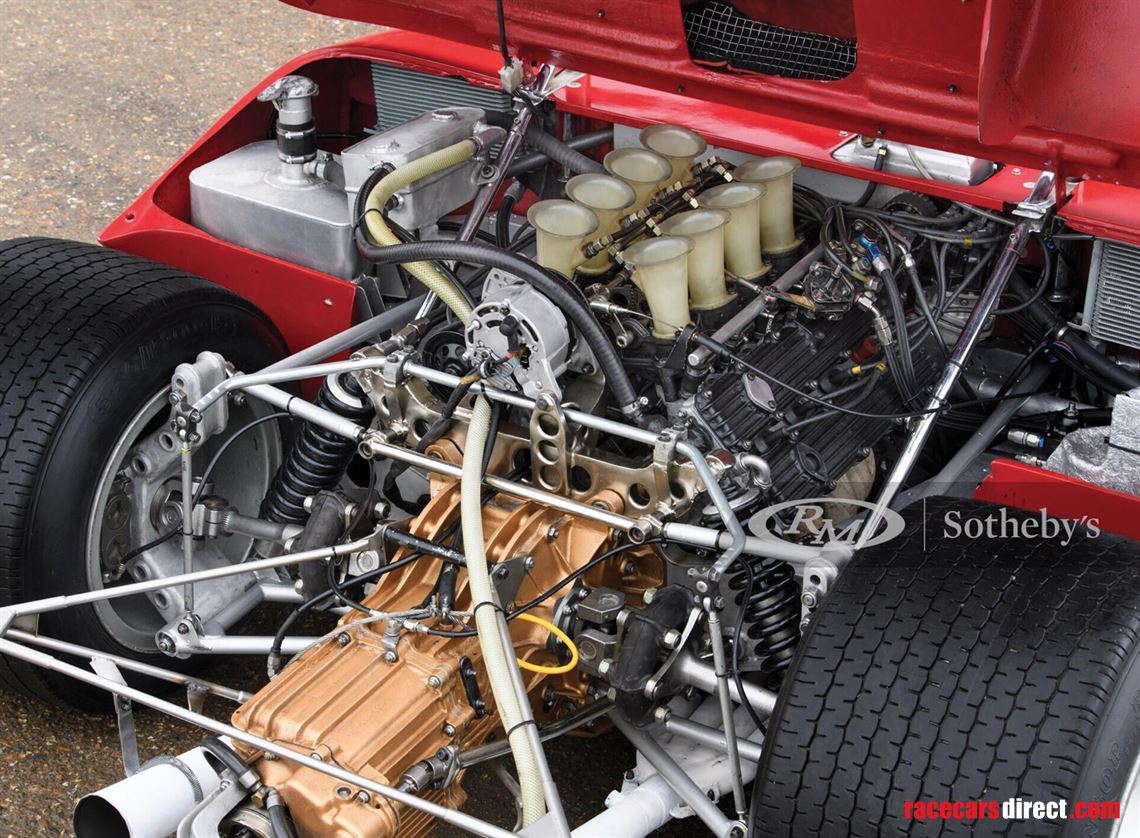 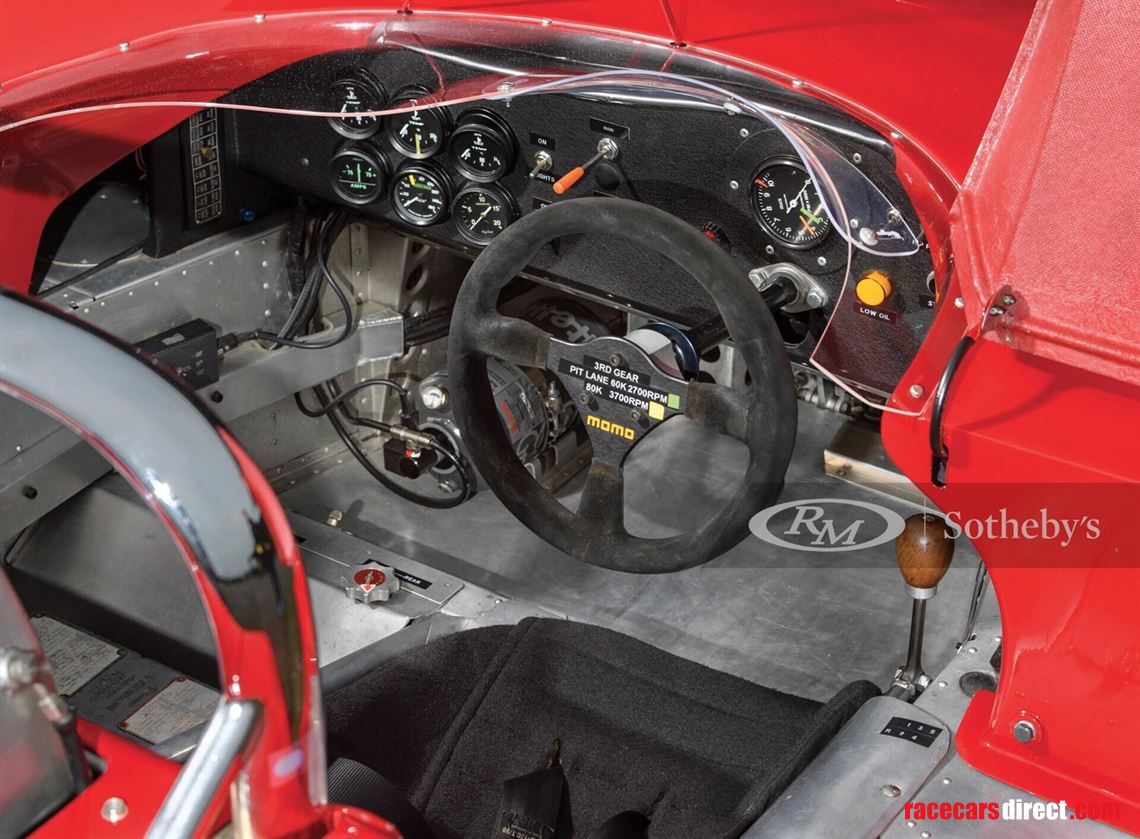 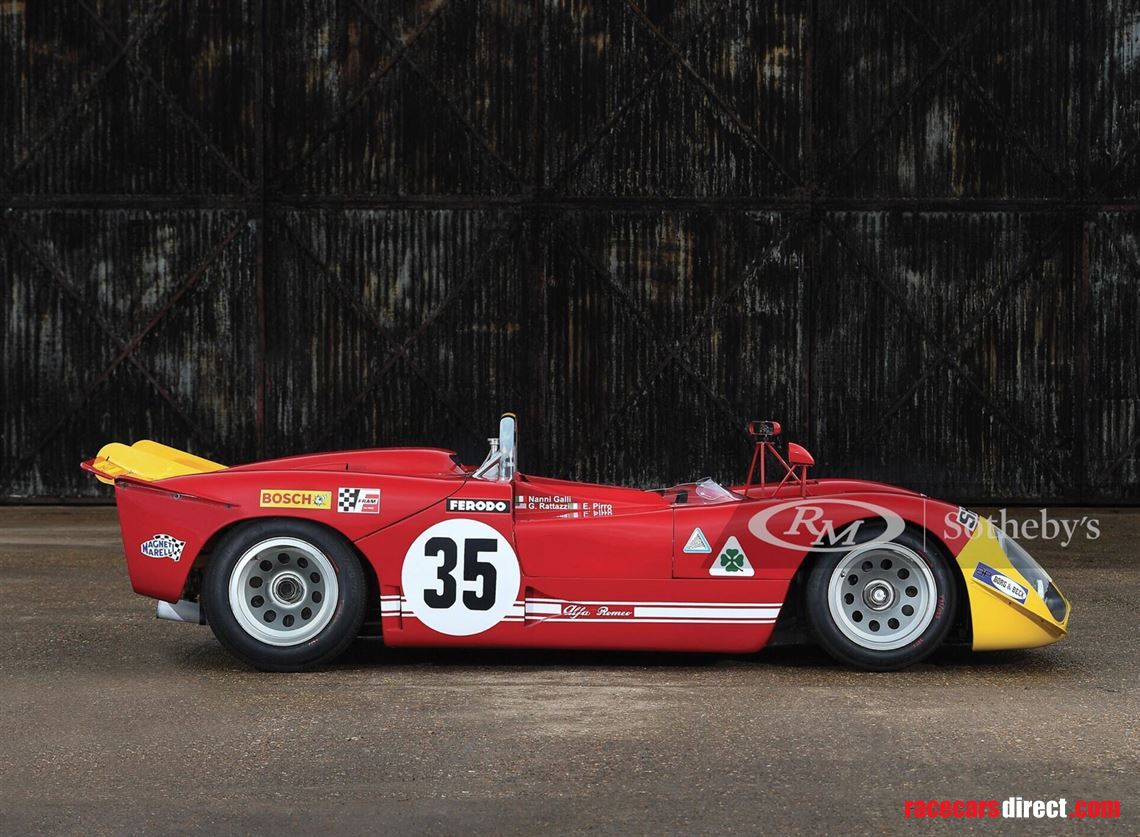 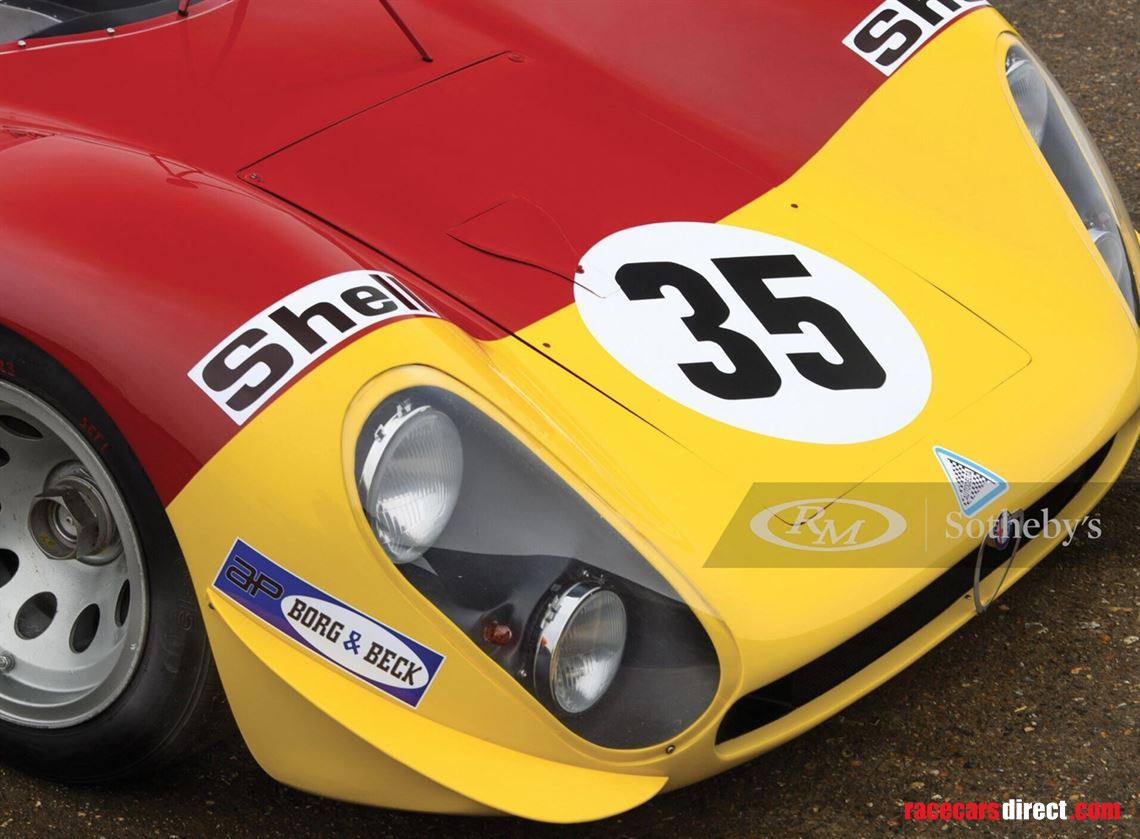 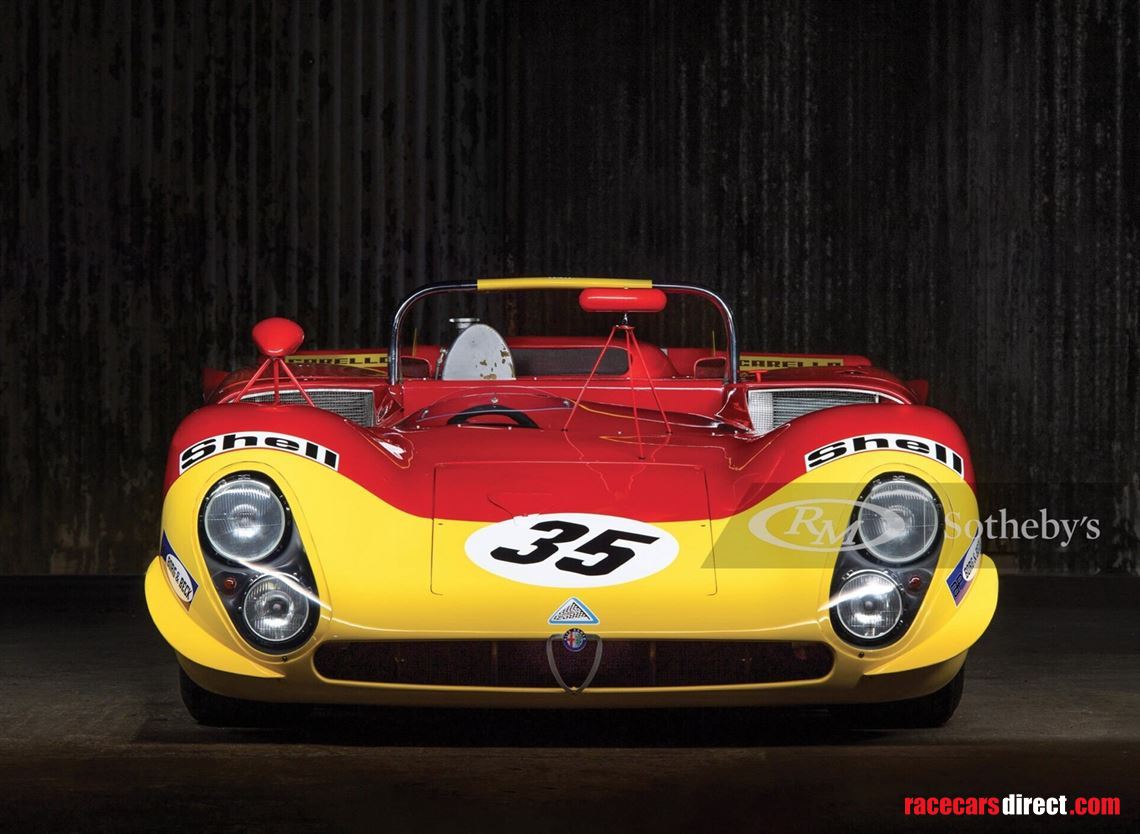 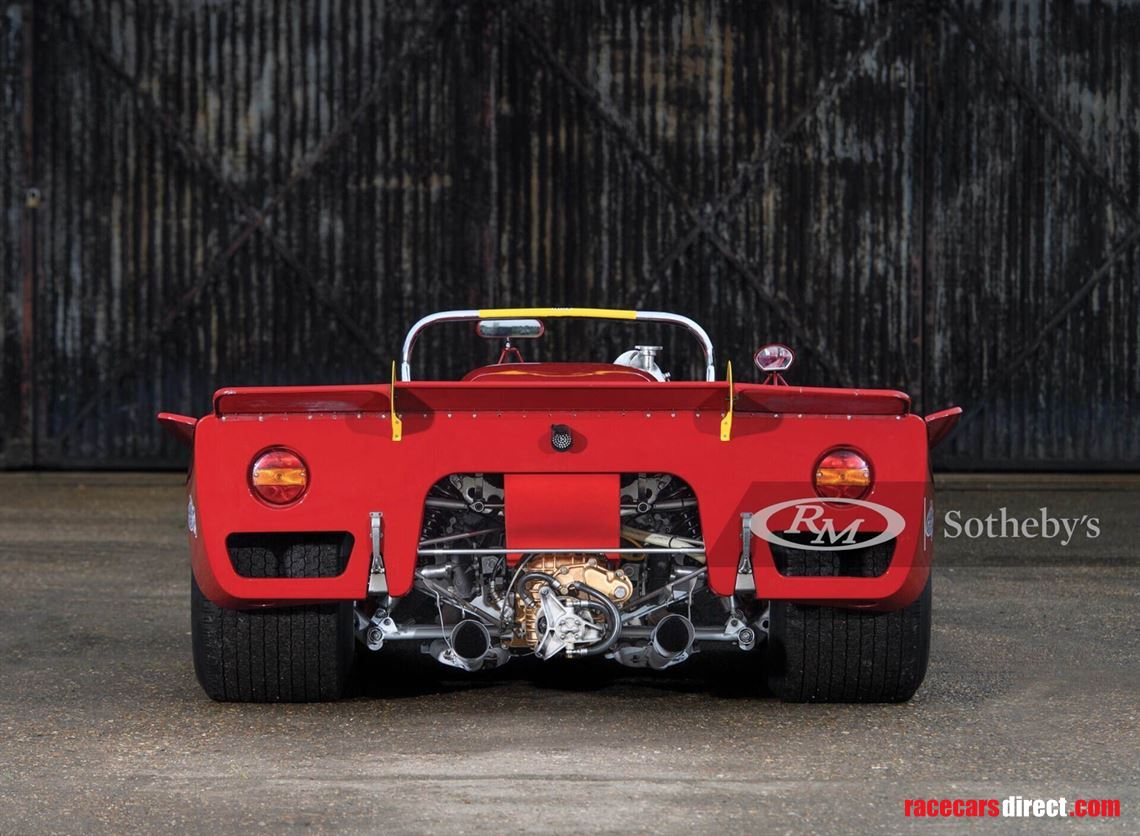 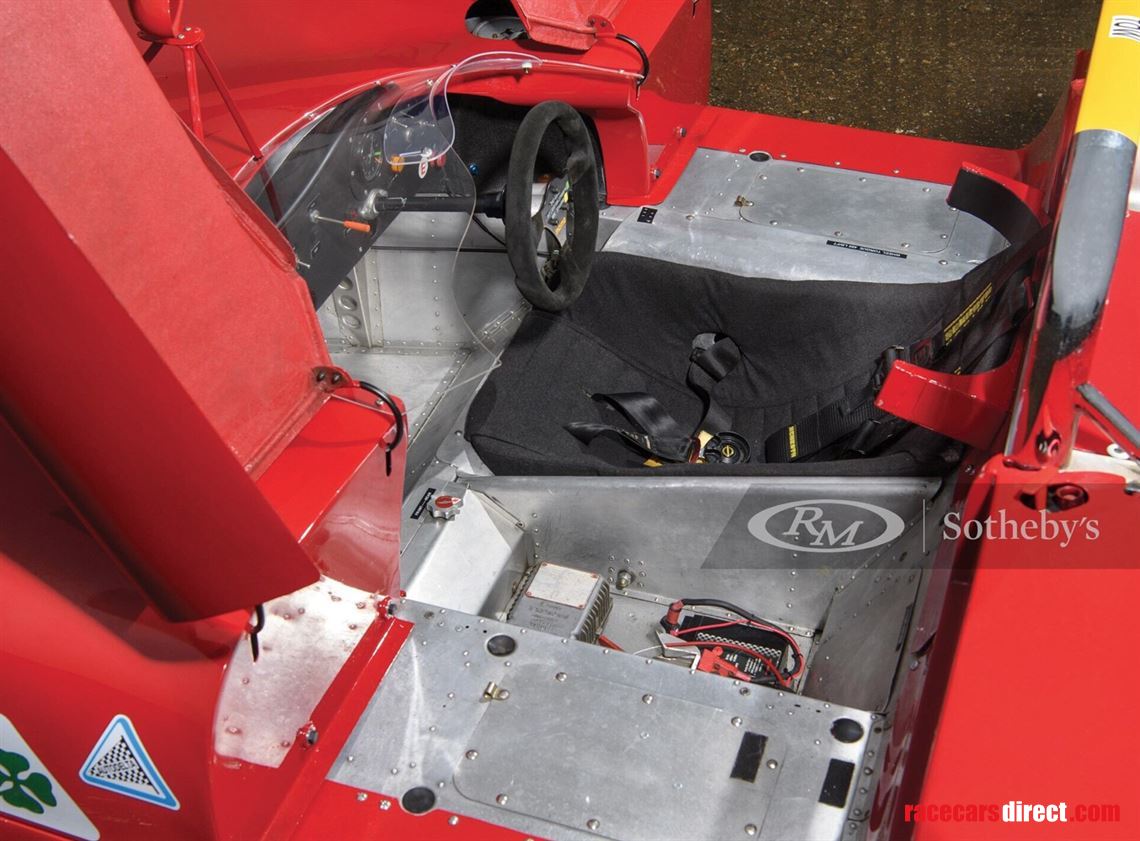 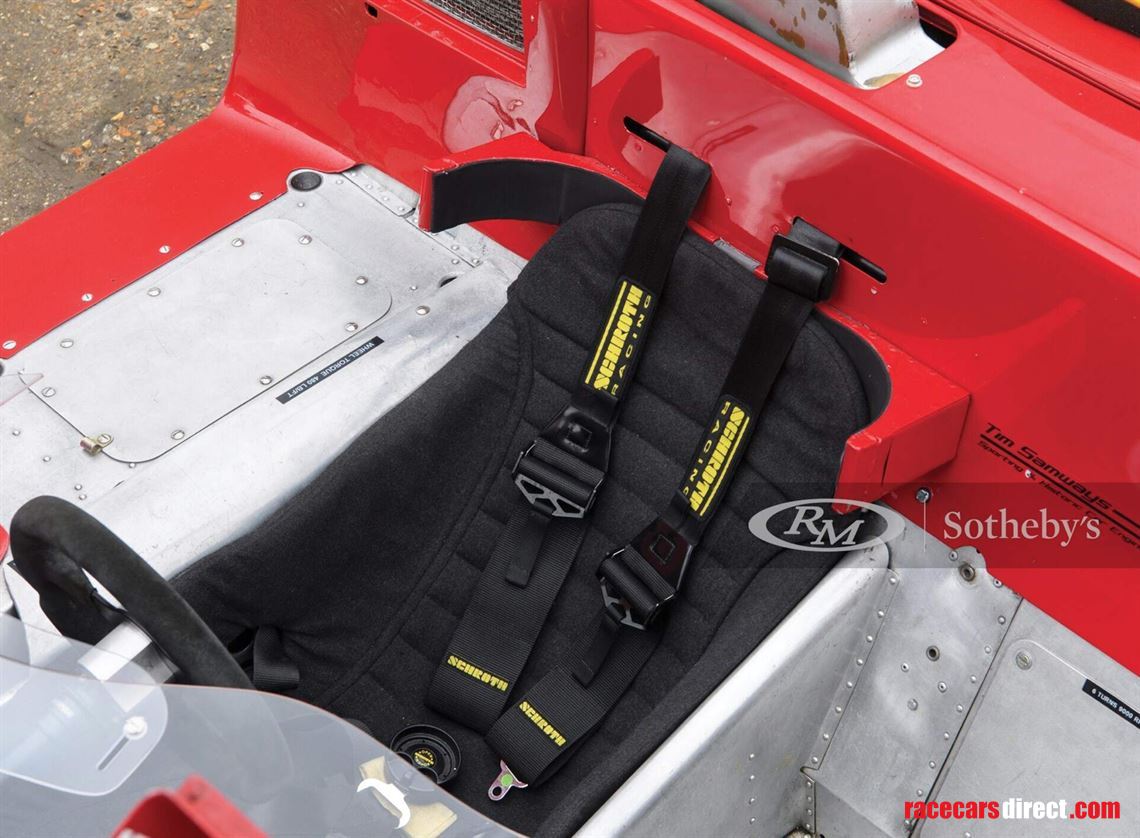 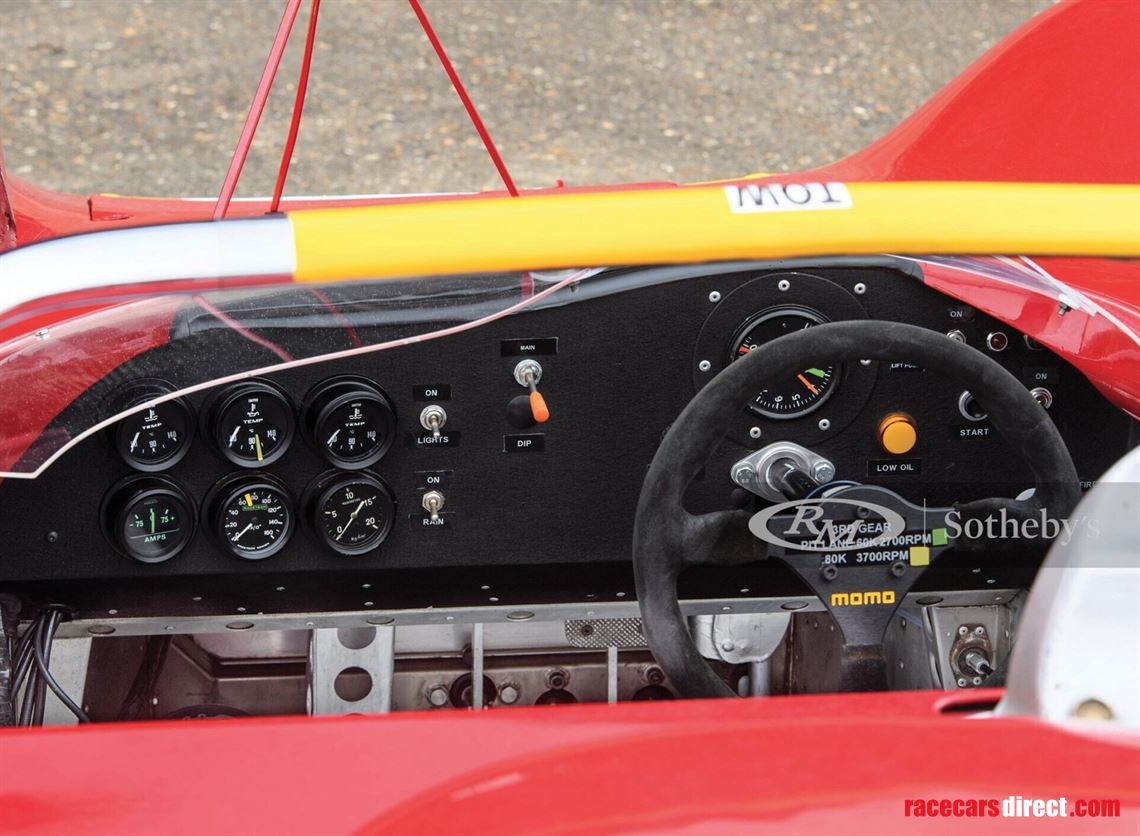 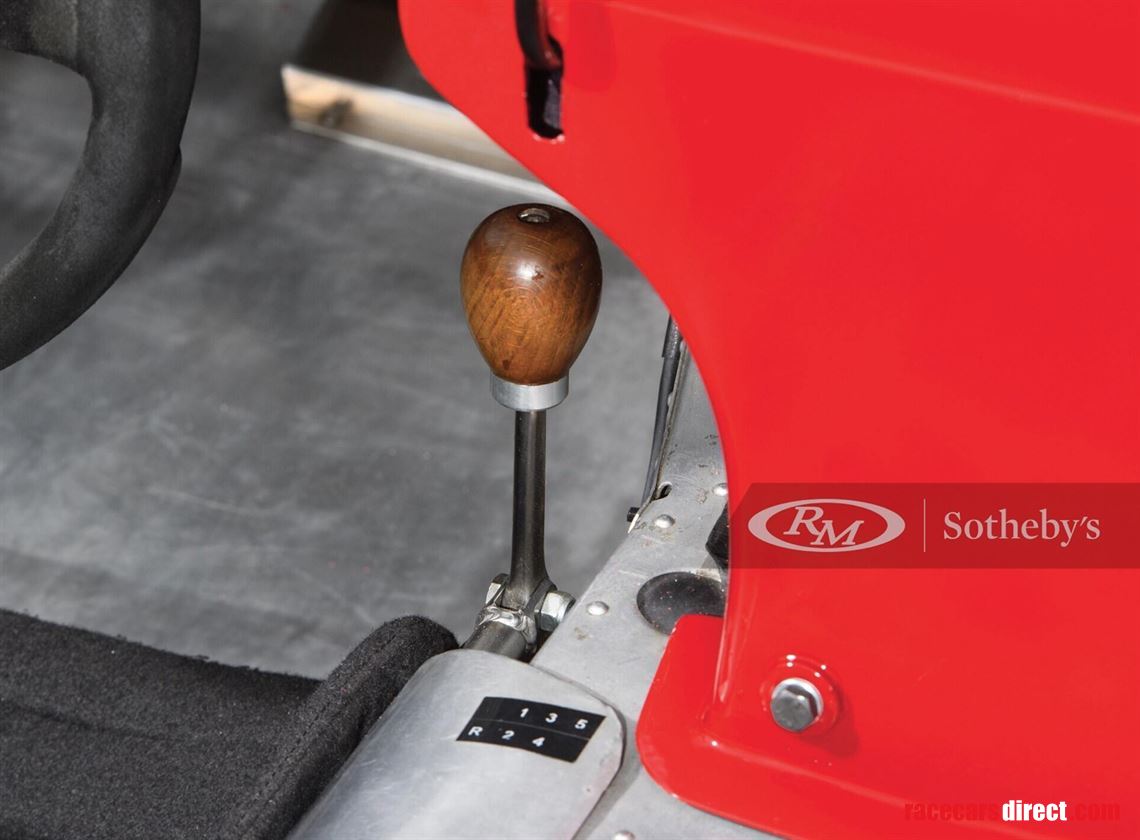 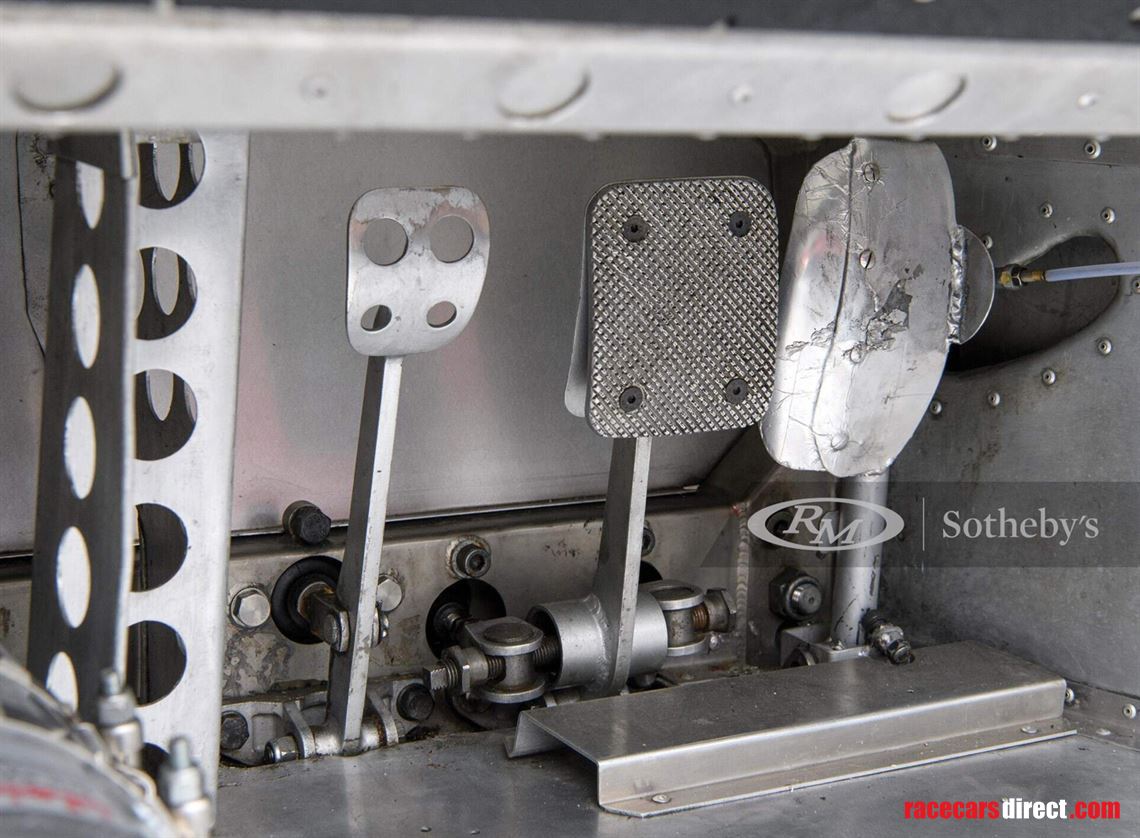 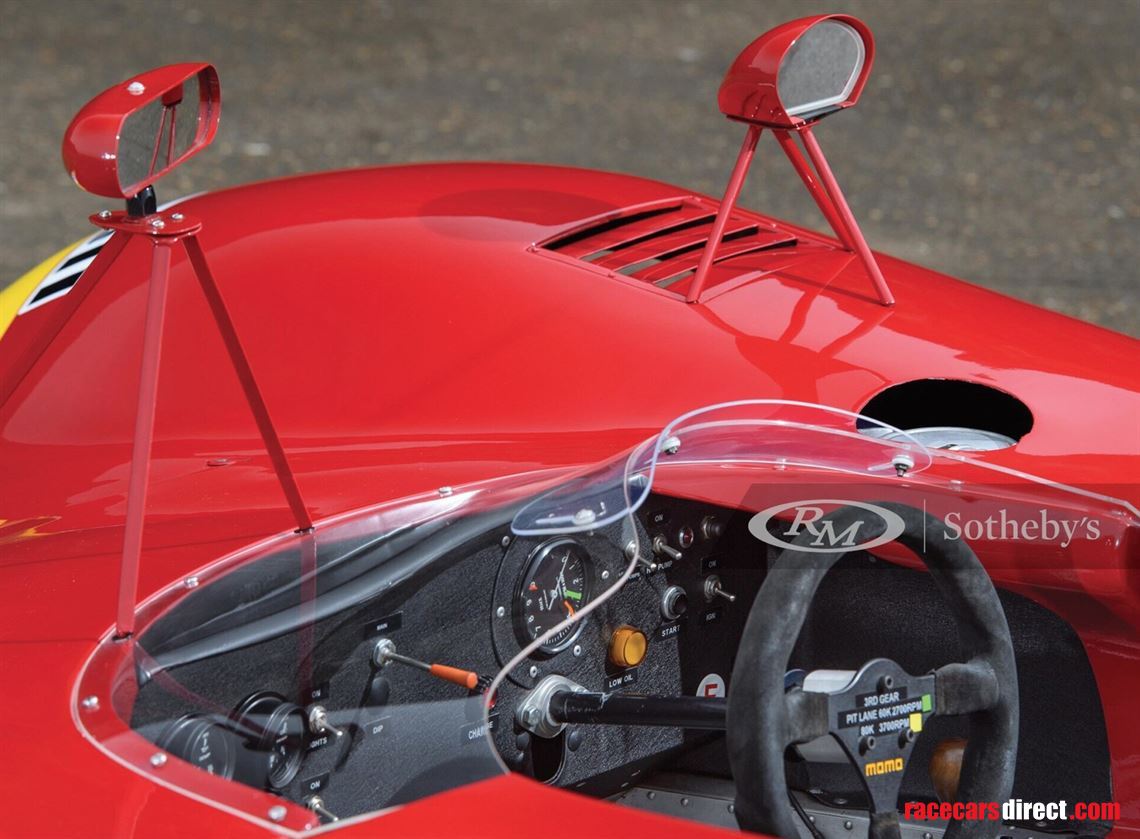 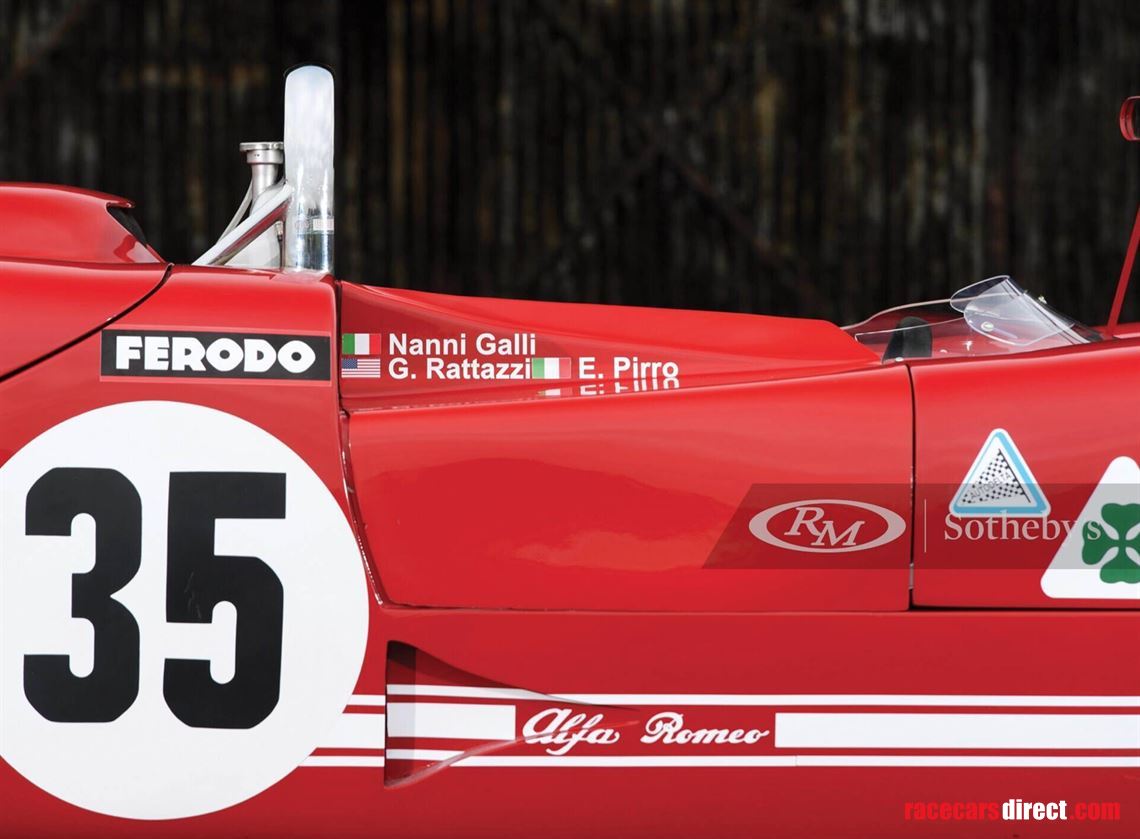 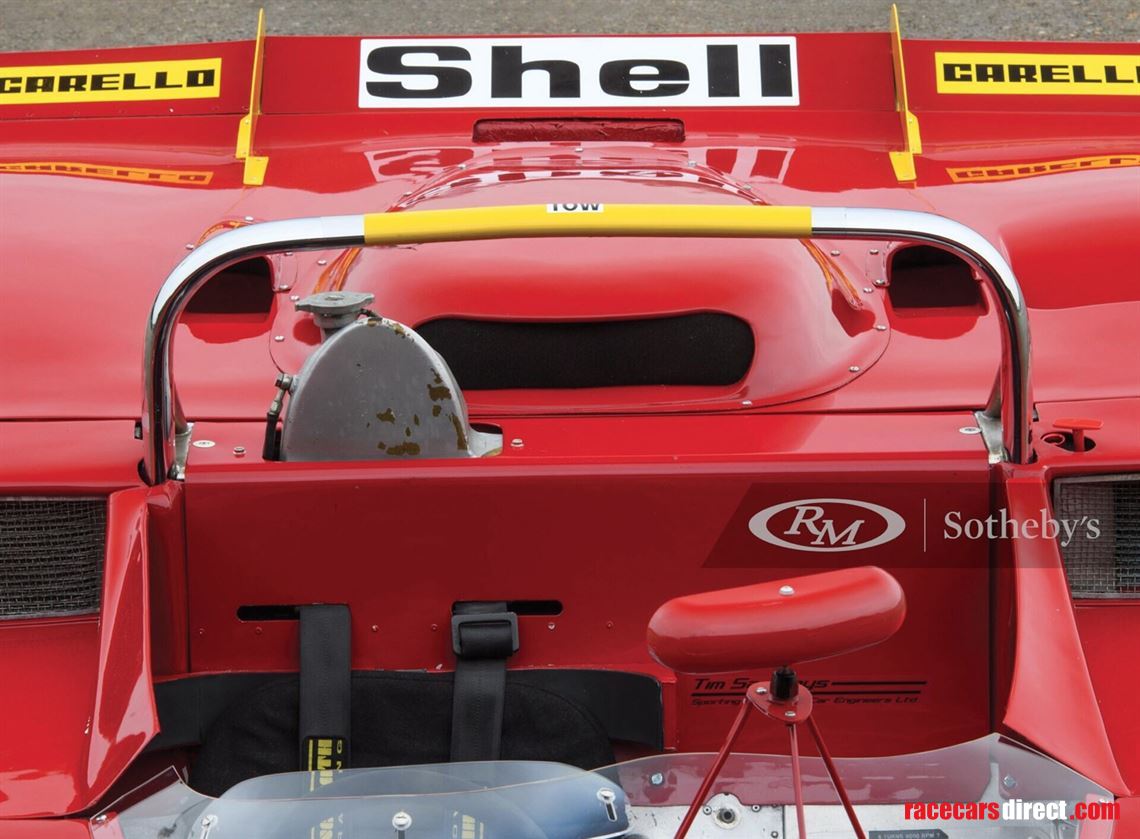 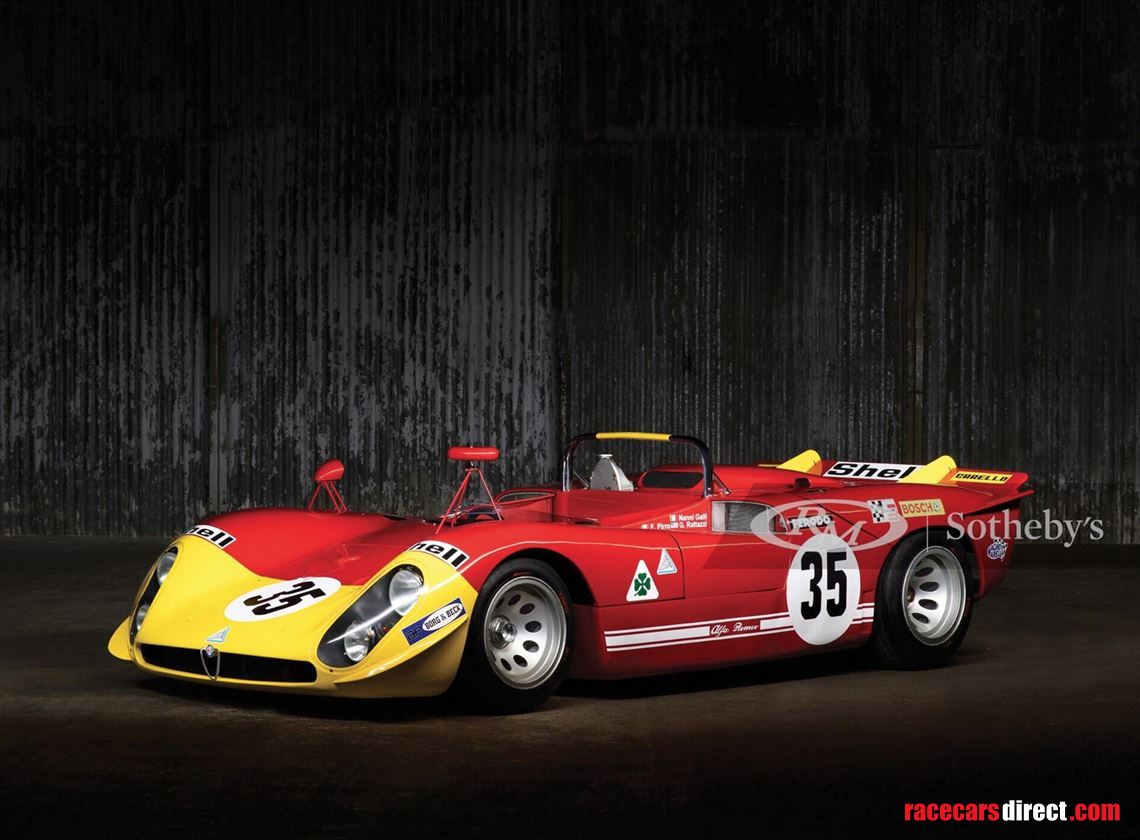 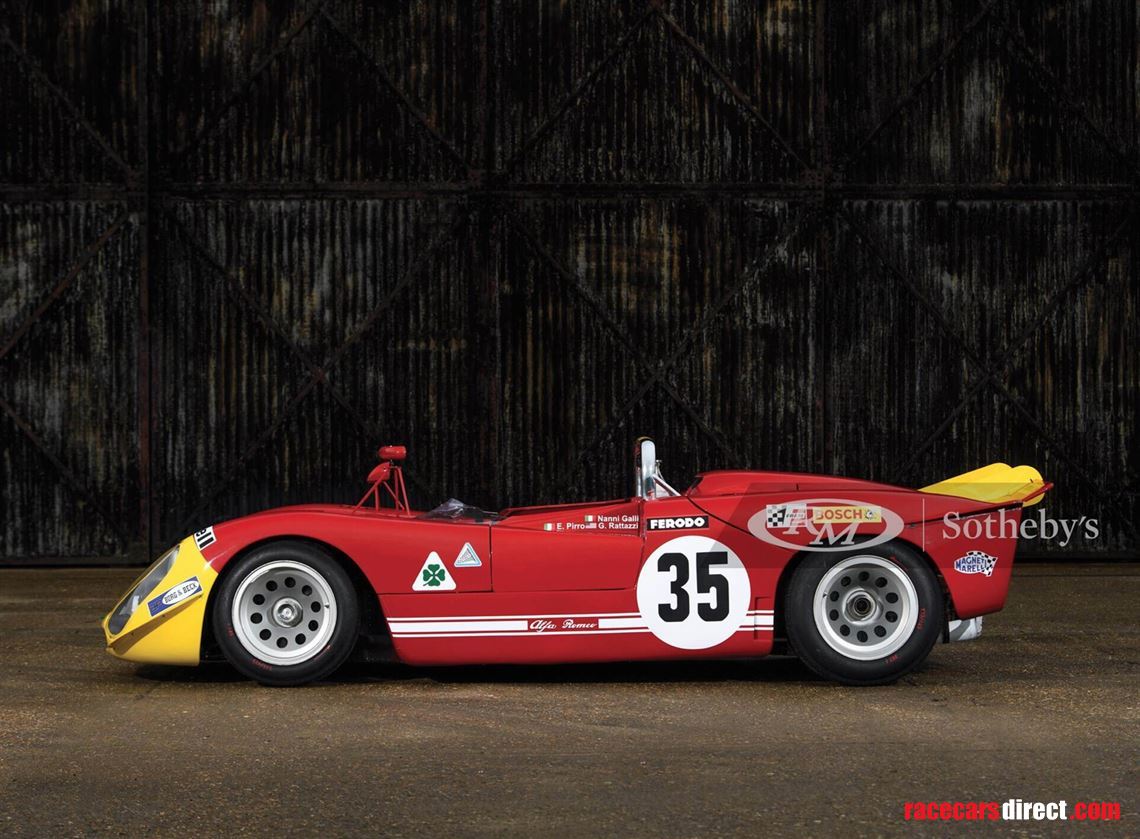 Upon the foundation of Autodelta as Alfa Romeo’s factory racing team in 1961, designers and engineers at the Milanese company found early success with the GTA, TZ and TZ2 models, while Orazio Satta Puliga and Giuseppe Busso instigated work on a prototype in 1966. They channelled their efforts into a project known as “105.33” and when a two-litre, four-cam, 90-degree V-8 engine was added, the earliest iteration of the Tipo 33 would become recognisable, weighing only 1,278 pounds and topping out just short of 185 mph.

An early competitive outing at a Belgian hillclimb in Fleron in early 1967 produced a win, and the Tipo 33 later appeared at Sebring, where Andrea de Adamich led the first two laps, but rivals from Ford and Porsche overtook as both Alfa Romeo entrants had to retire. Four cars were entered for the Targa Florio, yet the rough roads broke the front suspension on all team cars, despite de Adamich leading the two-litre class for some time—frustratingly, this happened again at Nürburgring on 1 June, when the front suspension broke on the car driven by de Adamich and Nanni Galli. The T33 was acclaimed for its looks but it was struggling to keep up with the rigours of motorsport. Autodelta produced the T33/2 in races throughout 1968 but by 1970, it was clear just how challenging endurance racing was. The virtually all-new Tipo 33/3 followed with a full monocoque chassis and the V-8 engine growing to 3-litre capacity, carrying the mantle for Alfa Romeo, which would fulfil a punishing race calendar around the world and require a fleet of primed racing machines. This Tipo 33/3, AR 105-80*023*, epitomises the appearance and engineering characteristics that were typical of Group 6 cars campaigned in the late-1960s and early-1970s.

Indeed, this example quickly made its mark on the world of motorsport. Having completed construction under the watchful eye of Carlo Chiti and his Autodelta outfit in 1969, the car joined the ranks of the other Tipo 33/3 factory cars in service at the time. Lining up against rival marques such as Ferrari and Porsche, the Autodelta team boasted a team of talented drivers who competed in the most demanding races. Tipo 33/3 results are difficult to trace due to carnet reasons but Nanni Galli recognised this car as being present at the 1970 Targa Florio, in the hands of Toine Hezemans and Masten Gregory. Despite Autodelta getting on top of previous years’ reliability issues, all the 3-litre Tipo 33s suffered accidents, including this car after five laps.

Notably, Chiti had his sights set on the fabled 24 Hours of Le Mans title. According to a declaration by Galli, the Italian driver pledges to have piloted this particular Tipo 33/3 as one of four cars entered by Alfa Romeo’s factory outfit in the 1970 edition of Le Mans in June, driven alongside Rolf Stommelen. Disappointingly for Autodelta, after 220 laps of racing and near the end of the race, Galli and Stommelen were disqualified for receiving Outside Assistance for a push start. Despite this, Galli held particularly fond memories of the famously gruelling edition as he and Stommelen were placed 2nd for much of the night after mastering the appallingly wet conditions.

Despite the fall of the chequered flag, Galli’s driving duties with this Tipo 33/3 at the Circuit de La Sarthe were not over, continuing with a supporting appearance in Steve McQueen’s Le Mans, the cult racing film released in 1971. Though not given a starring role, the Alfa Romeo can clearly be seen wearing its race number “35” in the motion picture, as captured in a screenshot taken from the film in the car’s history file.

In 1973, the car was sold by Chiti to its first private owner, Autodelta’s supplier of shock absorbers—as documented by a receipt of sale kept in the car’s history file. For reasons that are currently unknown, this Tipo 33/3 left Autodelta with a chassis number that does not use the typical prefix of “750-80”, instead using an Alfa Romeo road car prefix of “105-80”, presumably to ensure it did not race again after leaving the factory (the 1973 Bill of Sale is on file). Additionally, this car was given the number “023” which is known to be a car that was built and raced in 1971, not 1969/70. “750-80*023*” is very well-known as the 1971 Targa Florio winner and has impeccable provenance from the period; “105-80*023*” is an entirely separate car, and the two cars and their respective histories should not be confused. It is fair to assume that this Tipo 33/3 would have raced under an earlier chassis number with a “750-80” prefix; nevertheless, this car has superb known provenance from when it left the factory, which is rare among racing sports cars, let alone Tipo 33s.

Remarkably, the Tipo 33/3 would be retained by this first private owner for the next 30 years, forming part of an important collection until 2003. The car was preserved in a remarkably original state, believed to have barely been used by its first private owner, and described by previous inspection reports and sales descriptions as a “time warp” example representative of its earliest years of racing. One year on, in 2004, the car changed hands again. Its new owner would engage Northampton-based Pearsons Engineering Ltd. to commission a sympathetic recommissioning project—taking care to maintain the originality preserved for so many years. Gary Pearson carefully dismantled the car to remove the engine and gearbox, the former of which was sent for ultrasonic cleaning, then the drivetrain was rebuilt. All the instruments were cleaned and serviced and the car was reassembled using as many original parts as possible.

The car was acquired by its consigning owner in 2012 and between 2013 and 2020, the Alfa Romeo was entrusted to Tim Samways, operating out of Oxfordshire, U.K., for a “rolling rebuild”. Samways went about overhauling the car while still allowing for it to be driven, with receipts on file for “running in” testing on motorsport circuits around Europe, while it was also entered into classic motorsport events, such as Le Mans Classic and Spa Classic. Within the car’s history file, the consignor is pictured on the podium with Galli at the 2016 Spa Classic, while it proved its competitiveness in the hands of Emanuele Pirro with 5th on the Plateau 5 starting grid at the 2016 Le Mans Classic.

The most significant works carried out by Samways encompassed annual winter overhauls, regular engine and gearbox strip-down and rebuild maintenance, frequent pre-race preparation with post-race checks, and the manufacture of a new fibreglass front-end in 2019. After looking after and gradually recommissioning the car over seven years, invoices paid from the consignor to Samways exceed £700,000. Additionally, this T33/3 is offered with a huge spares inventory including, but not limited to: front and rear bodywork, an engine block, front and rear uprights, oil tank, crown wheel and pinion, gauges, tonneau, brake parts including callipers, engine internals including a crankshaft, wishbones, two sets of spare wheels, various gear ratios and a gearbox shaft. A full list of spares is on file.

Curiously, seat inserts labelled with de Adamich’s name were recovered from this Tipo 33/3 after its 30-year stay in the first private collection, but the declaration from Nanni Galli—that this was the car he drove in the prime of his career—connects the car to races such as Le Mans and the Targa Florio in the golden age of Autodelta racing. Carefully preserved with an irresistible mix of originality with practical application for use in many of the headline historic racing events available today, this Tipo 33/3 would be of great interest to any Alfa Romeo collector, endurance racing enthusiast, or classic racing participant. The car is offered with entry to the 2022 Le Mans Classic, which would be fitting as this Alfa Romeo’s next high-octane outing on the grid.

A comprehensive 'kit' to build a GTAm racer, eligible for the HRDC 'Classic Alfa Challenge'.

Ticking all the right boxes, this well presented, totally standard P1 has a Full Service History