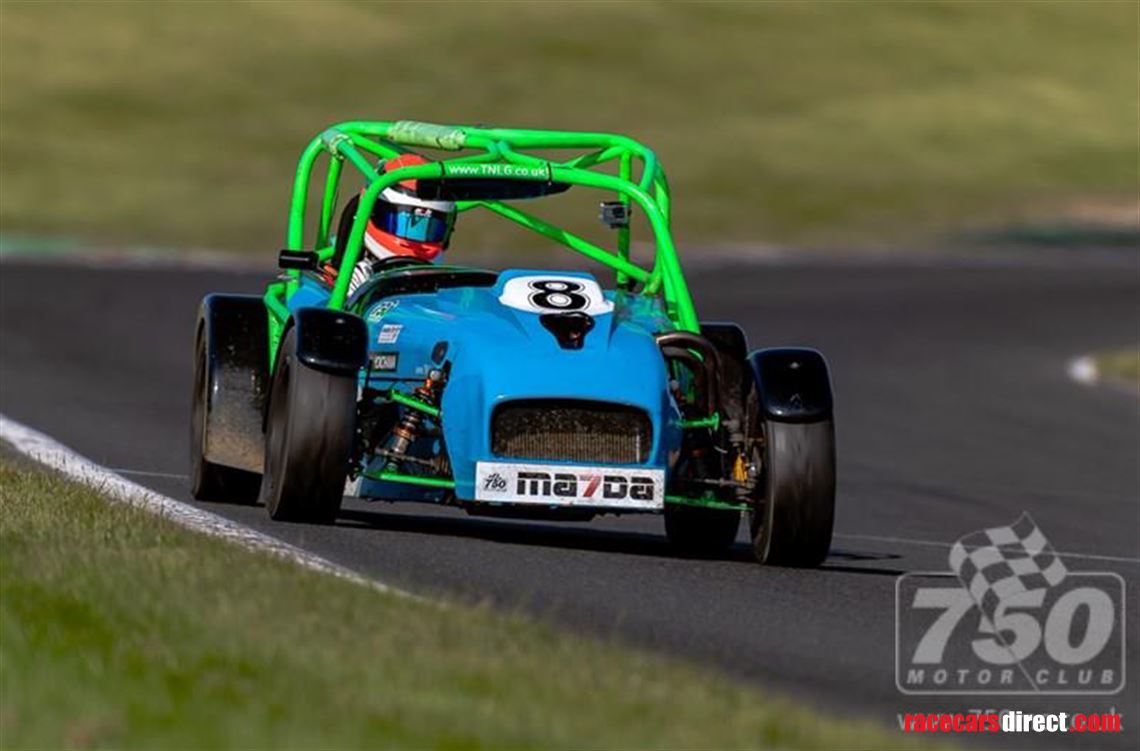 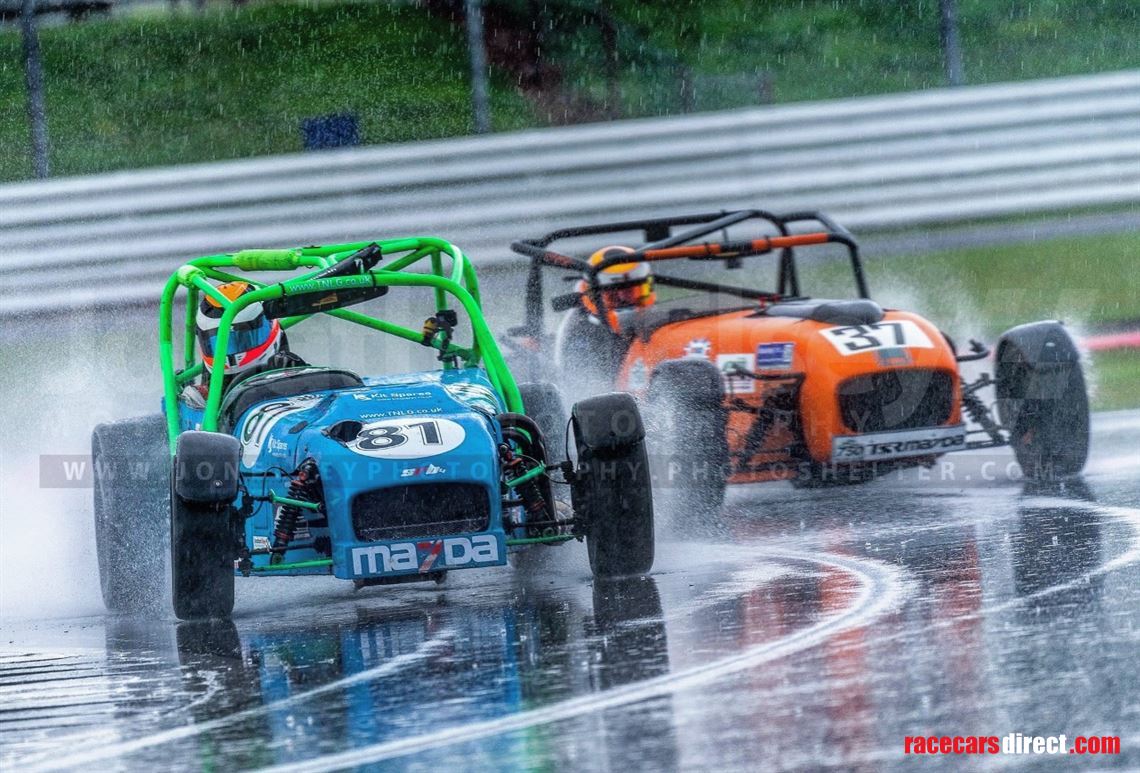 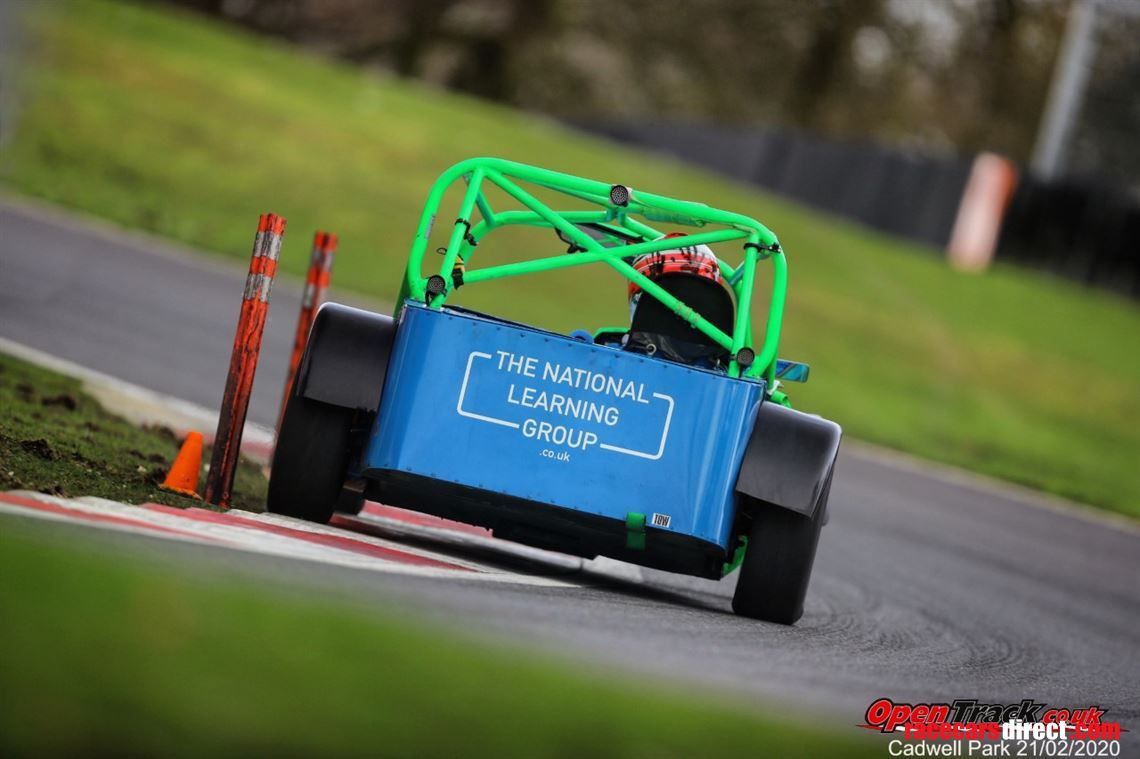 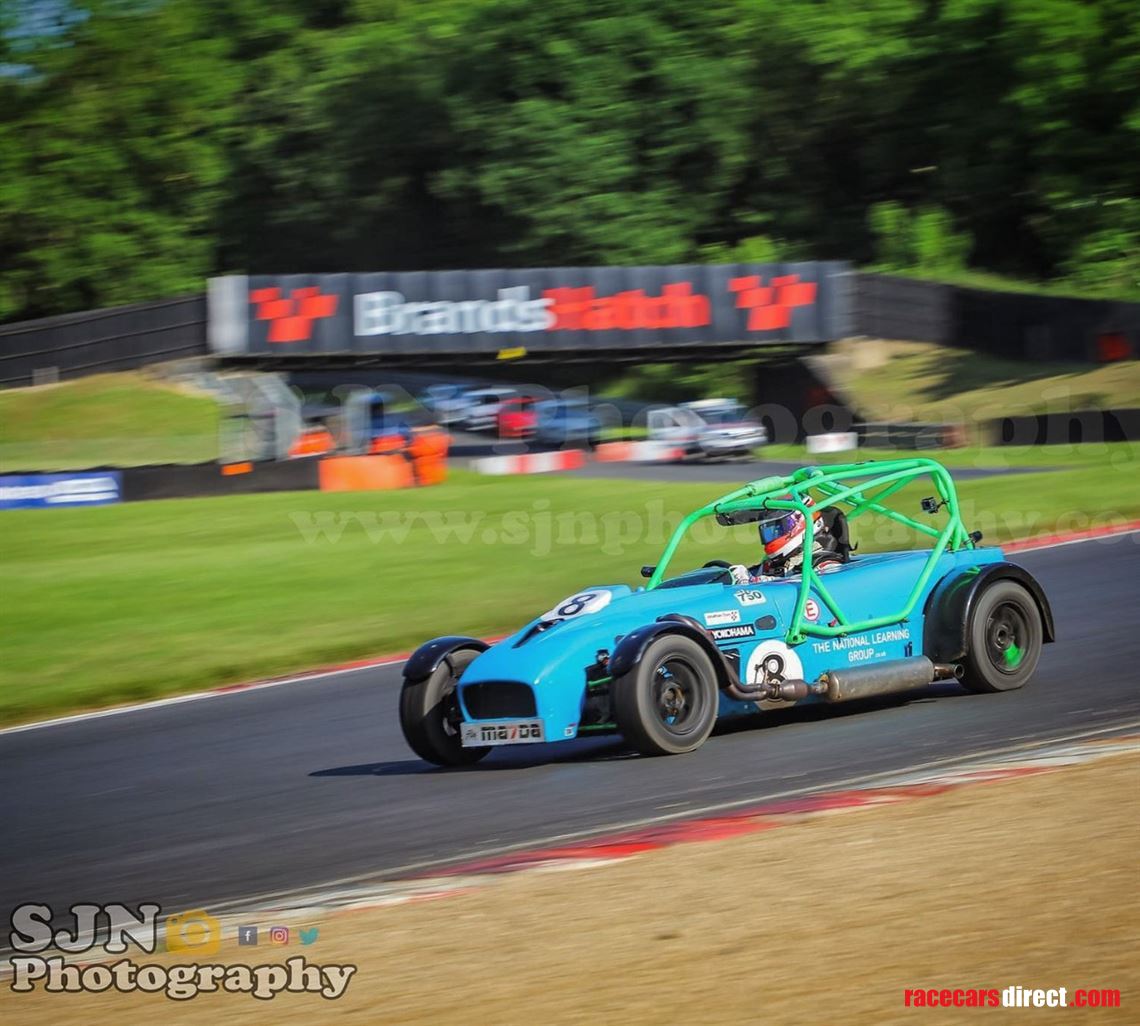 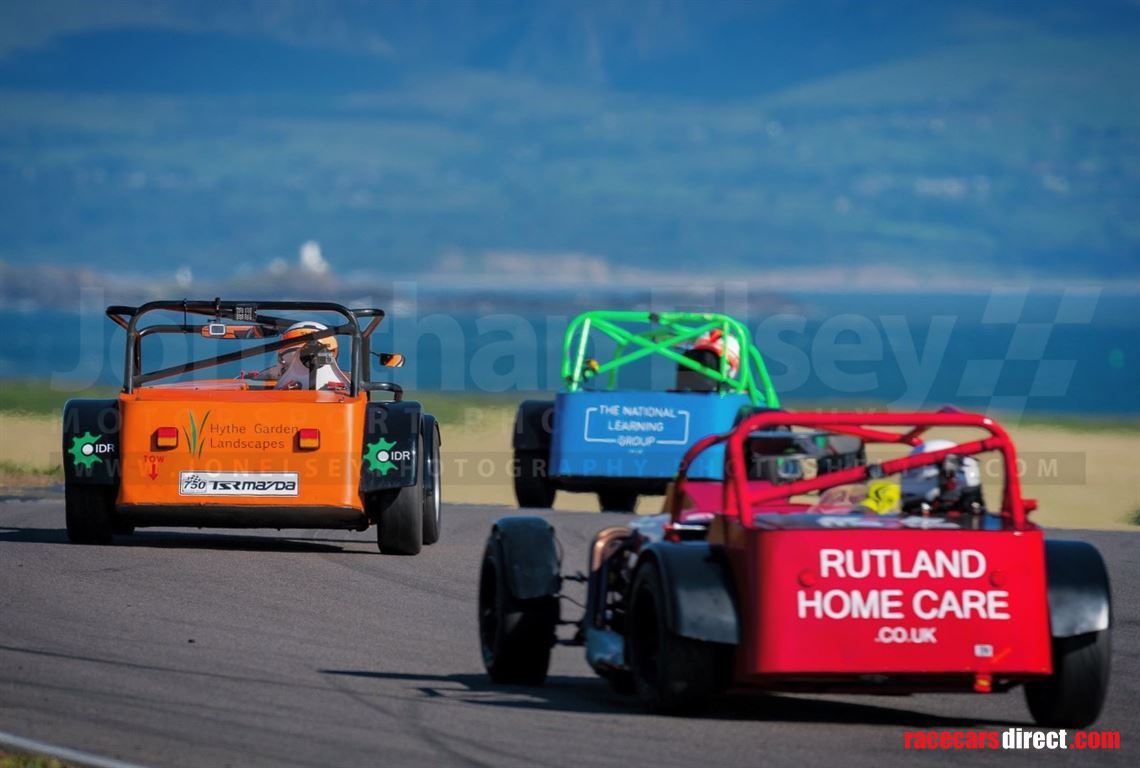 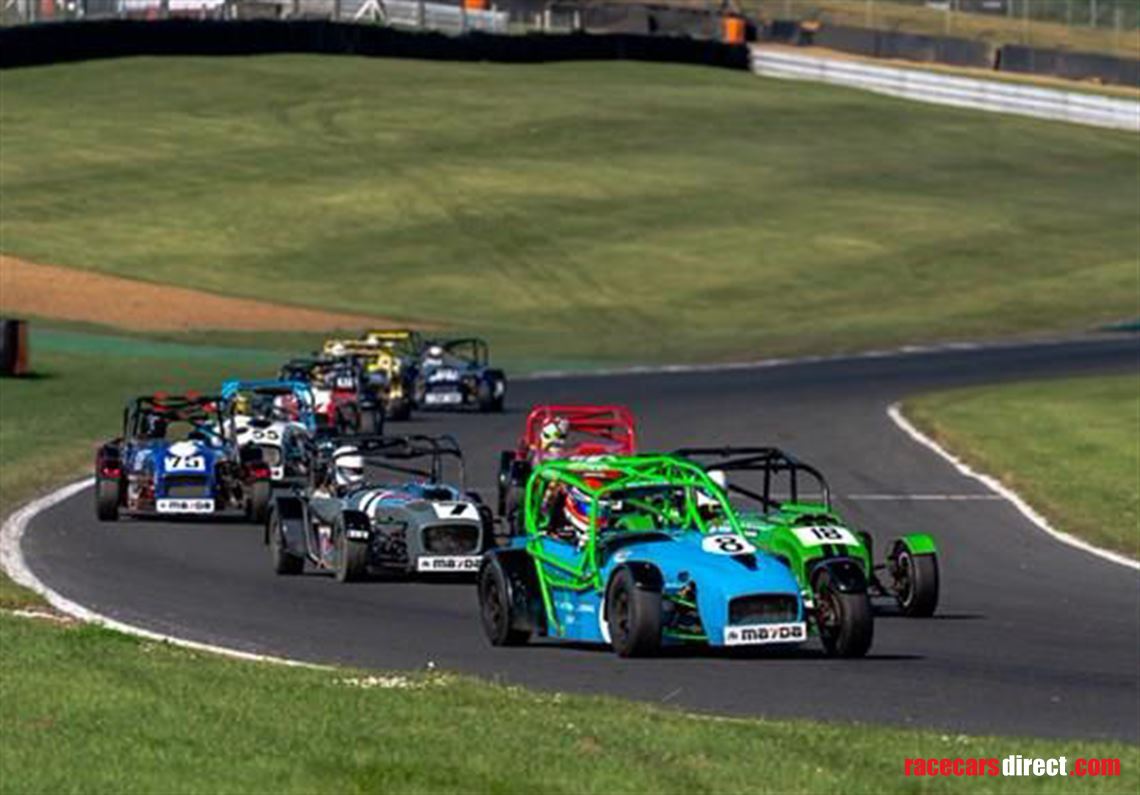 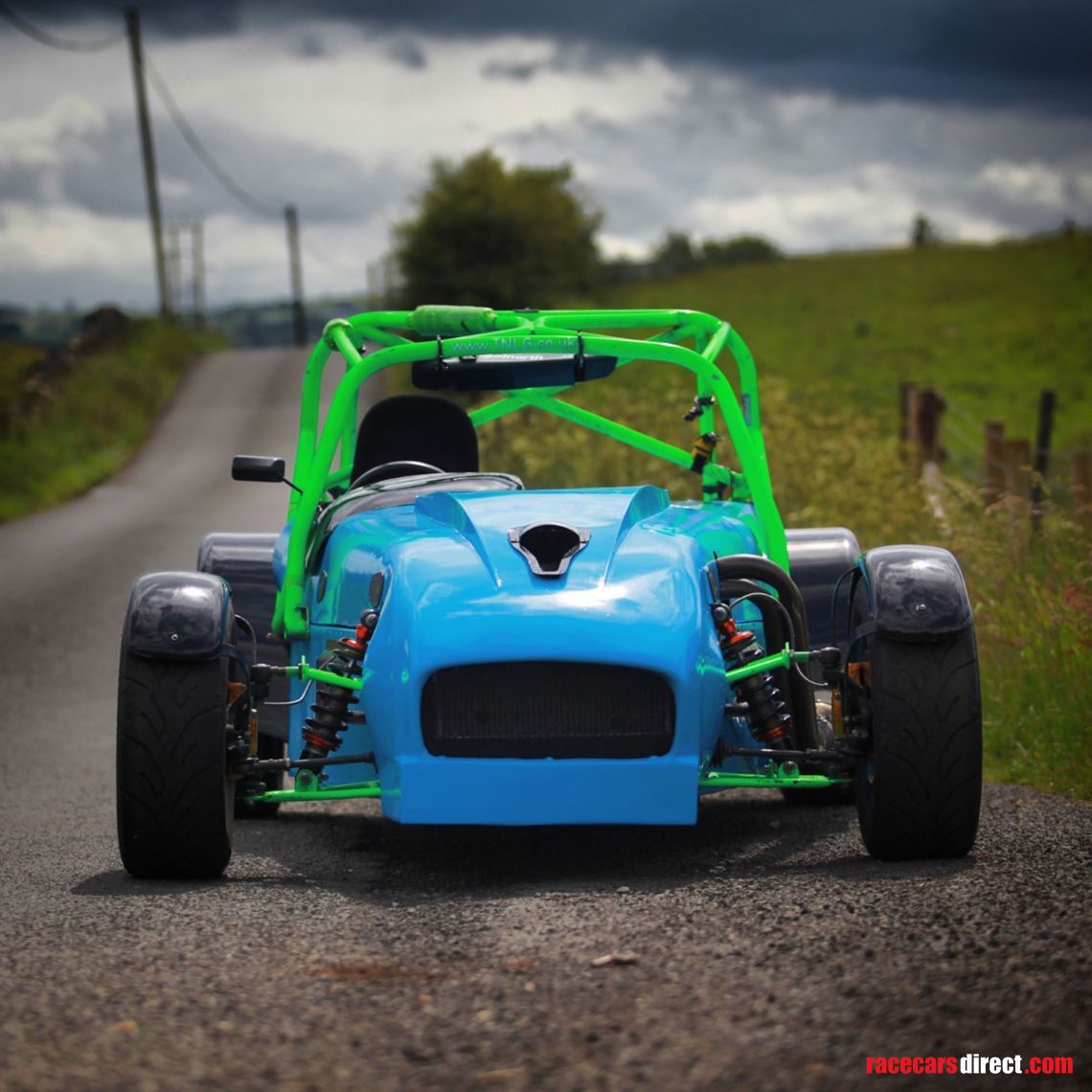 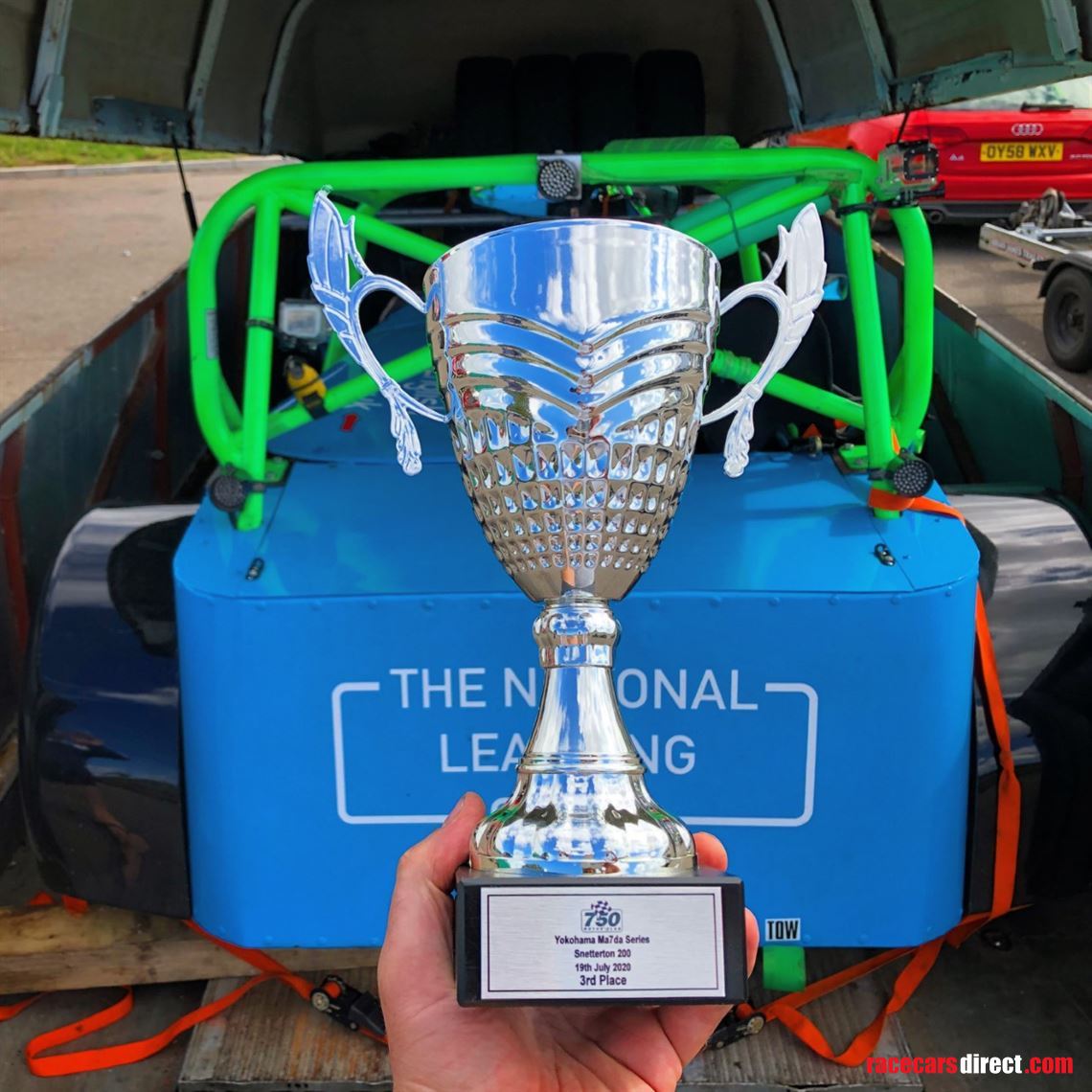 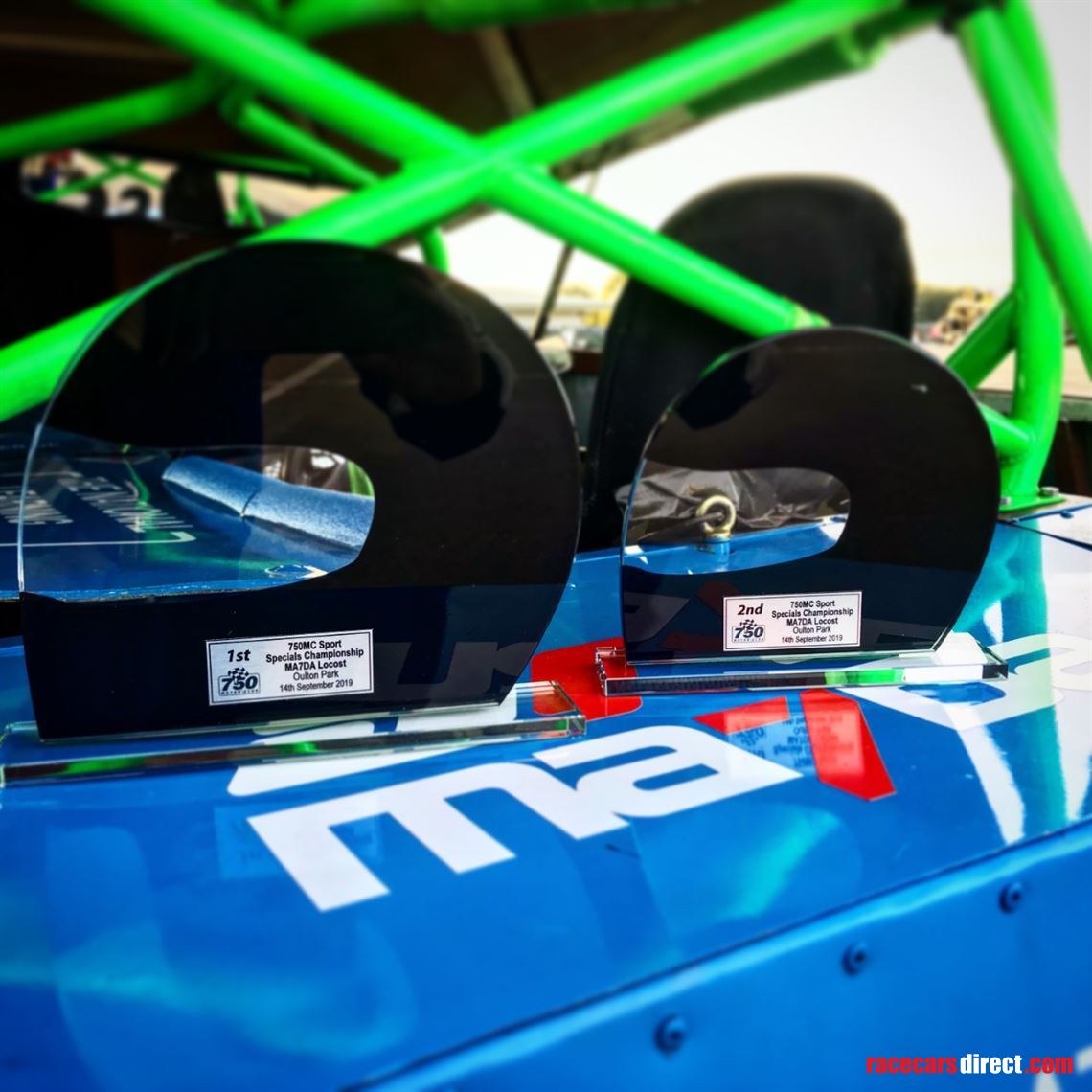 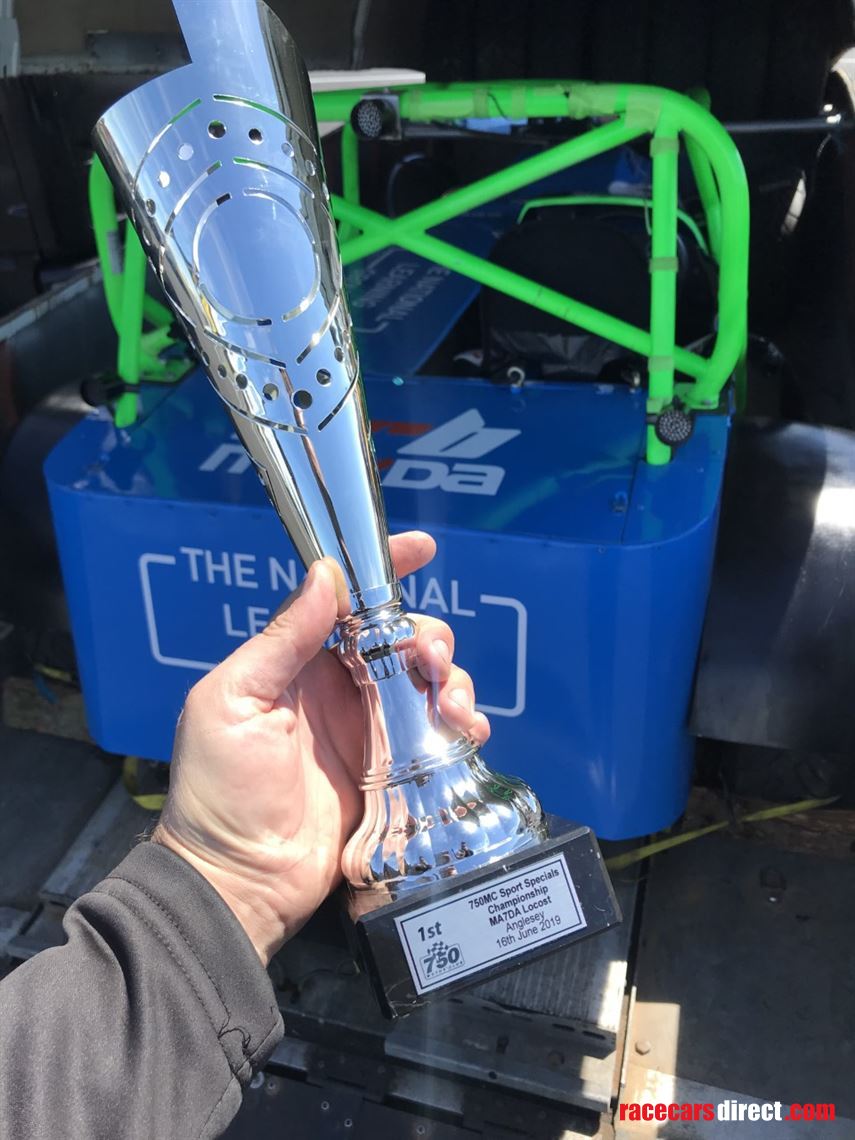 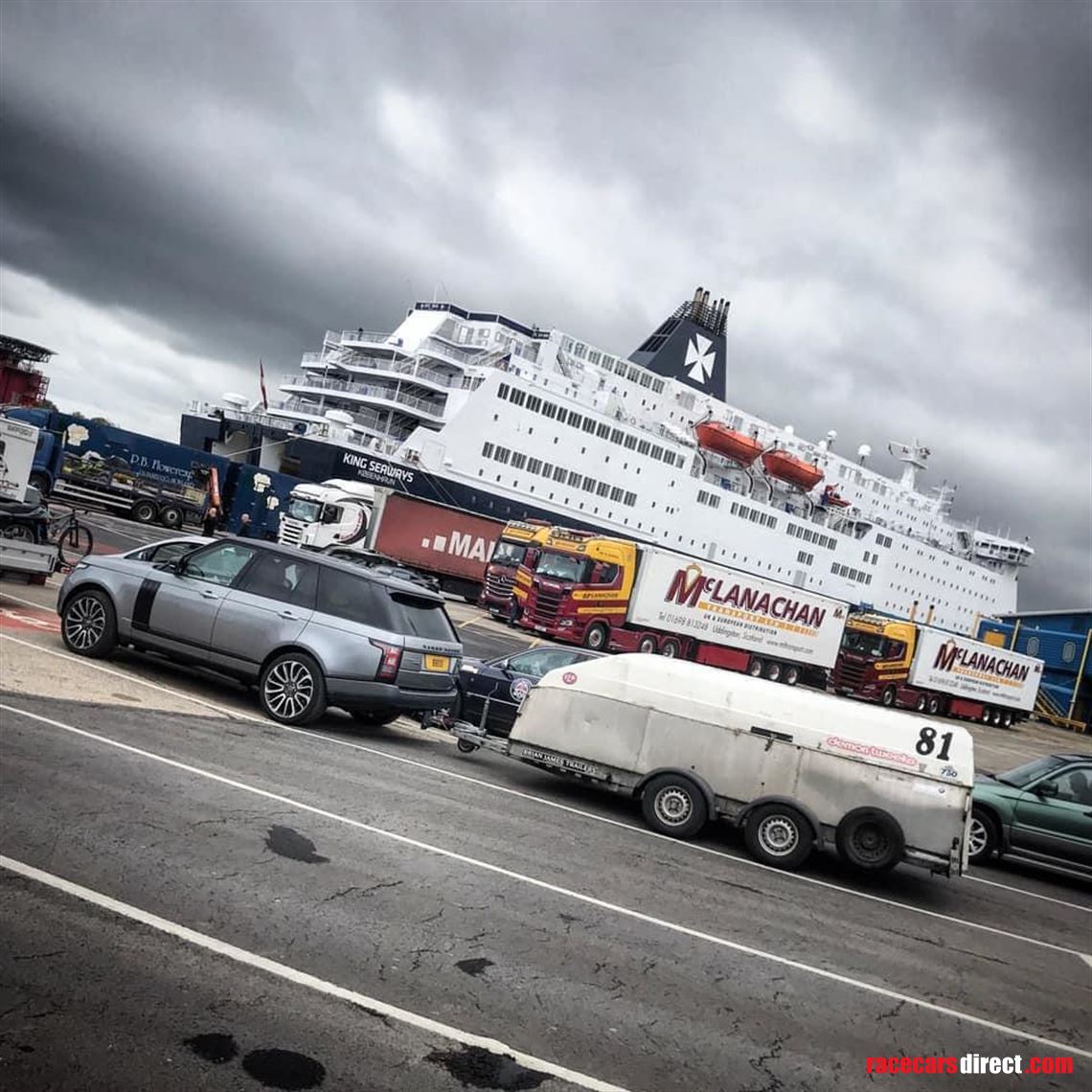 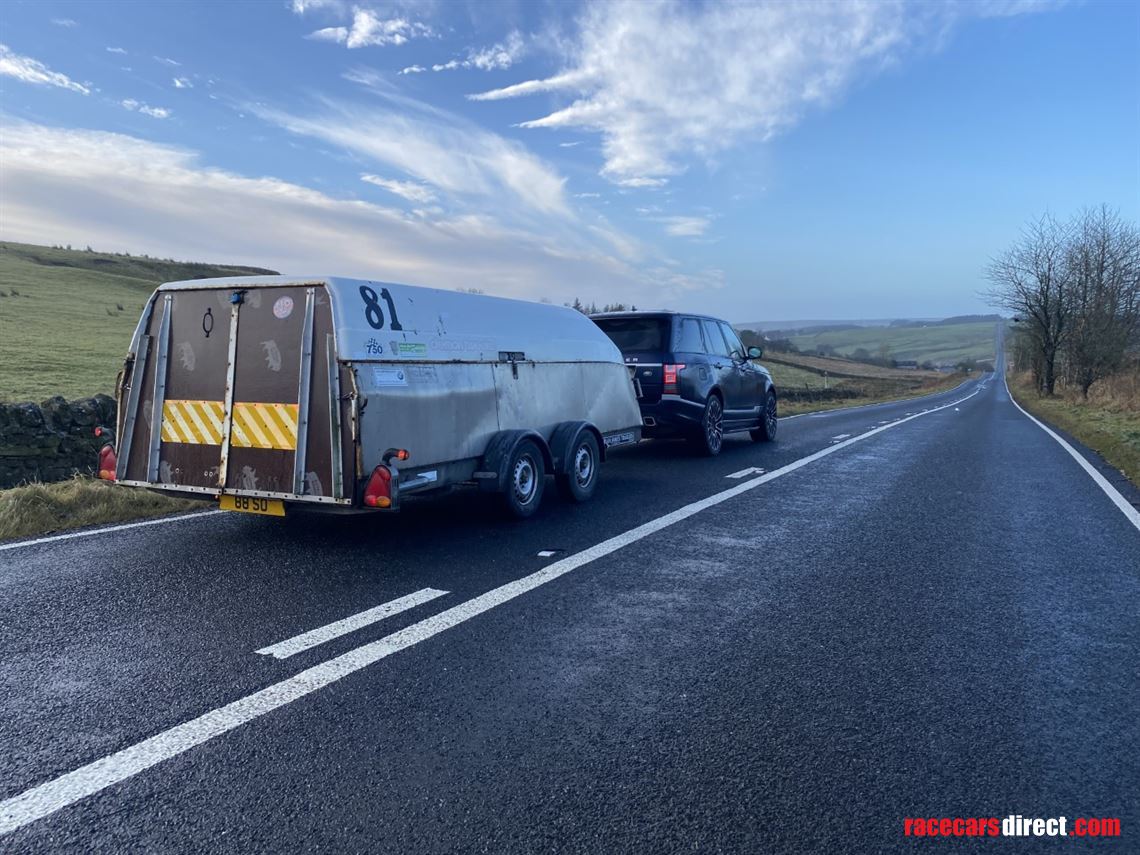 Ever fancied going racing? 750MC MA7DA series is one of the best, most fun, closest wheel to wheel racing, with a great, friendly paddock atmosphere... and much cheaper than you would expect! There is still time to be on the grid in 2022. It would also be able to be run in Mag sevens and various other series, or a great track day car.

Here is the chance to own one of the best MA7DA race cars on the grid. This car has excellent provenance, and with the right driver is a race winning car which would be able to fight for the championship in 2022. It holds the current lap record at Anglesey, and the last 5 proper races it has crossed the line 1st, 1st, 1st, 2nd, 3rd with a very average driver.

I am only selling due to a recent heart attack, which has unfortunately put an end to racing for the foreseeable future.

The car was built for me by Richard Bradley (SRB racing) ready for the 2018 Locost series, and was originally painted Nardo grey / green. It was chassis number 002 (and the first customer car) of Richards SRB4 cars; the 4th generation and design of SRB cars. Richard had been building and racing these for many year prior, and with his son Sam (Mercedes Formula 1 mechanic and Lewis Hamilton’s number 1) their experience and time culminated in this, the final iteration of his car building legacy.

In the 2018 season, we decided to move away from Crossflow Locost, and converted the car to an 1800 Mazda engine, something that had been discussed around the Locost paddock for many years. This was the first car to be converted, and the car that developed the parts and tested the components which became regulation in the 750 MA7DA series.

For 2019, the car was painted blue, and campaigned in the 750MC Sports Specials series in the MA7DA class. Richard at SRB created and fitted a new front end to the car to better fit the Mazda engine, and as the series grew, the car claimed a lap record at Anglesey along with crossing the line 1st in both races, before then taking another win and a 2nd at Oulton Park.

In 2020 I only raced once at Snetterton 300, and finished 3rd. Due to work and health issues I wasn’t able to race again that year.

2021 was another year without being able to get out properly, so the time was spent getting the car sorted in order to hit 2022 full on. TSR Racing had the car for over 6 months, sorting out anything they could see, to make the car as reliable and fast as possible. They also fitted an Alan Coller front end onto the car, which meant that I could run the TMC geometry set up. After getting it back, it then went to TMC engineering to get a new engine and full geometry set up with Matt Cherrington who is the best in the business at car set up.

I was ready to campaign the car for 2022, even registering for the championship, until a heart attack stopped me in my tracks. Since I will not be able to race for the foreseeable future, I took the difficult decision to sell the car for someone else to enjoy rather than put it into storage. It is currently registered as number 8 for 2022, which the new owner is welcome to keep and run.

This is the lightest car on the grid by a long way. I am 6’4 and 120kg, and the car was built to fit me. Anybody shorter and lighter will be able to move the seat forward and add ballast to hit minimum weight which will help the balance of the car. The rollcage is an official Westfield cage from Caged laser, which I had homologated to be able to be used on a Locost chassis, and was 12kg lighter than an equivalent Locost cage which we weighed it against. The car is around 545kg with 9L of fuel and no driver. The series minimum is 665KG with driver.

The bodywork is also one off which I designed and made myself. Included with the sale, is the mould for the bonnet / nosecone. The bodywork has been made to be as light as possible, and although slightly rough around the edges, gives the car a unique look, and is the most aerodynamic car on the grid.

The car is currently wrapped in Avery light blue wrap, which really looks great against the lumo green rollcage, and always stands out on the track and in photos.

The wishbones are all custom made by Alan Coller, to be light and strong. He has the jig for these so can make more, and it comes with spare, longer top wishbones to allow more castor if needed. He also made the rear panhard rod.

New rear brakes (Fiesta ST) were fitted in the 2020-2021 winter, so have hardly had any use. They are lighter and better than the previous items.

The car also has aluminium hubs which saves un-sprung, rotational mass and were allowed from the 2022 regulations.

The car has a red transponder, which doesn’t need a subscription or fees. These are currently selling for up to £750 second hand, so another thing you don’t to buy separately.

The dampers are ATR mono-tube, which were very expensive, and work extremely well. I was sponsored by ATR in 2018 / 2019 so we developed the specific damper rates with ATR and worked together to get them working well on their damper dyno. They were re-valved in 2021 by TSR, and have the correct spring rates front and rear. They have just had the bushes re-oiled and all been checked over by TMC ready for the 2022 season.

The wiring loom is a full TSR, 3-piece loom. This means that if there was ever a wiring issue, the broken section can be easily replaced without having to re-wire the car.

The diff has just been reconditioned and fitted in February 2022, ready for the season.

It also had new wheel bearings recently, and fresh rear half-shafts in 2021 to make the rear as planted as possible.

A new engine was fitted in February 2022, taken from a low mile MX5, and has great compression. It has also had a set of balanced injectors, all with a great matched flow rate fitted in 2022.

The wheels are Compmotive CXR with new tyres which have only done around 10 laps of Brands Hatch, so heat cycled and ready to go.

Any preventative work that has been required has been carried out, and the car is fully ready to go out and race next weekend if needed! The only thing that needs attention is the air intake in the bonnet. I was planning to use a TSR intake for 2022, however I will leave this up to the new buyer, but the current one works fine as is.

Apologies for the long description, but I am extremely passionate about this car, and until around 1 week ago had given an open chequebook to get it as sorted as possible ahead of the 2022 season.

Opportunities to buy cars like this don’t come around very often.

Included with the car is a Word document of everything ever done to it, along with dates, set up notes so you can get the ideal set up out of the box, and information about all oils etc that you would want to use with it.

I also have a covered Brian James trailer, which fits the car perfectly and has an inbuilt tyre rack. It tows extremely well and has never let me down. The buyer of the car is welcome to purchase the trailer for an extra £3,000.

The car is currently at TMC near Bristol (GL15) however at some point it will come back up to me in Northumberland.

Join the biggest, baddest BMW grid of the year at Donington Park, at the huge Sommerfest event

Car Storage and Workshop at Spa-Francorchamps