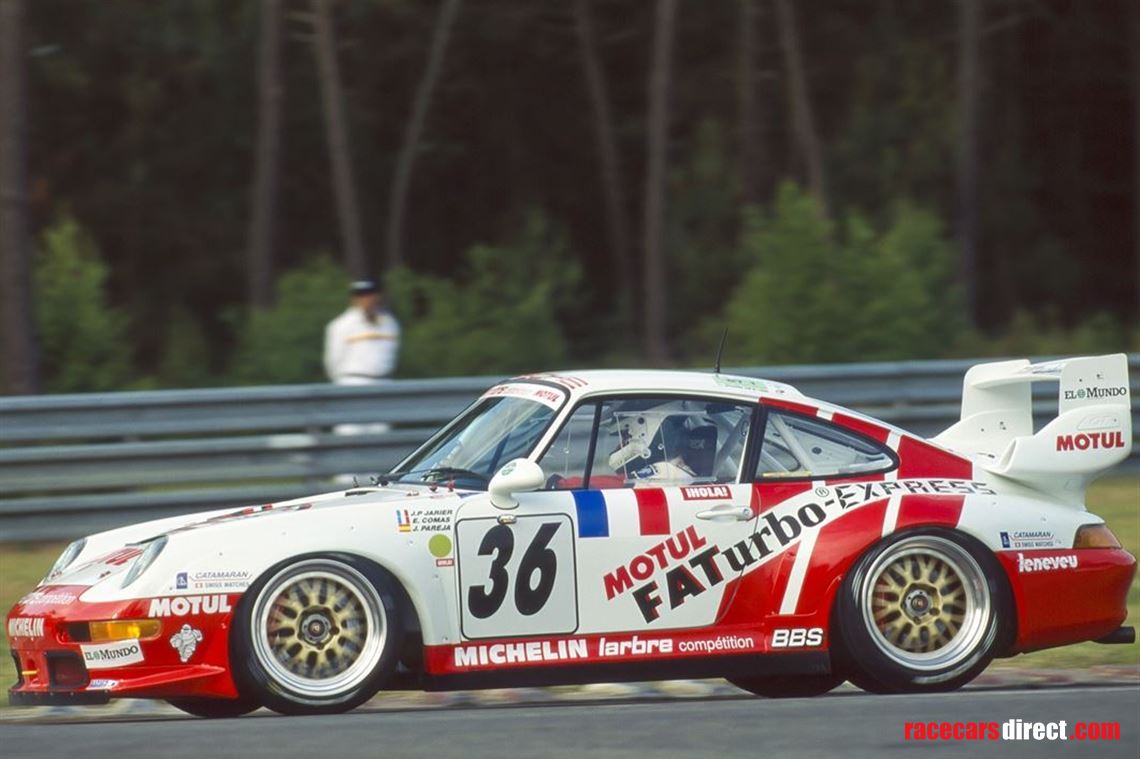 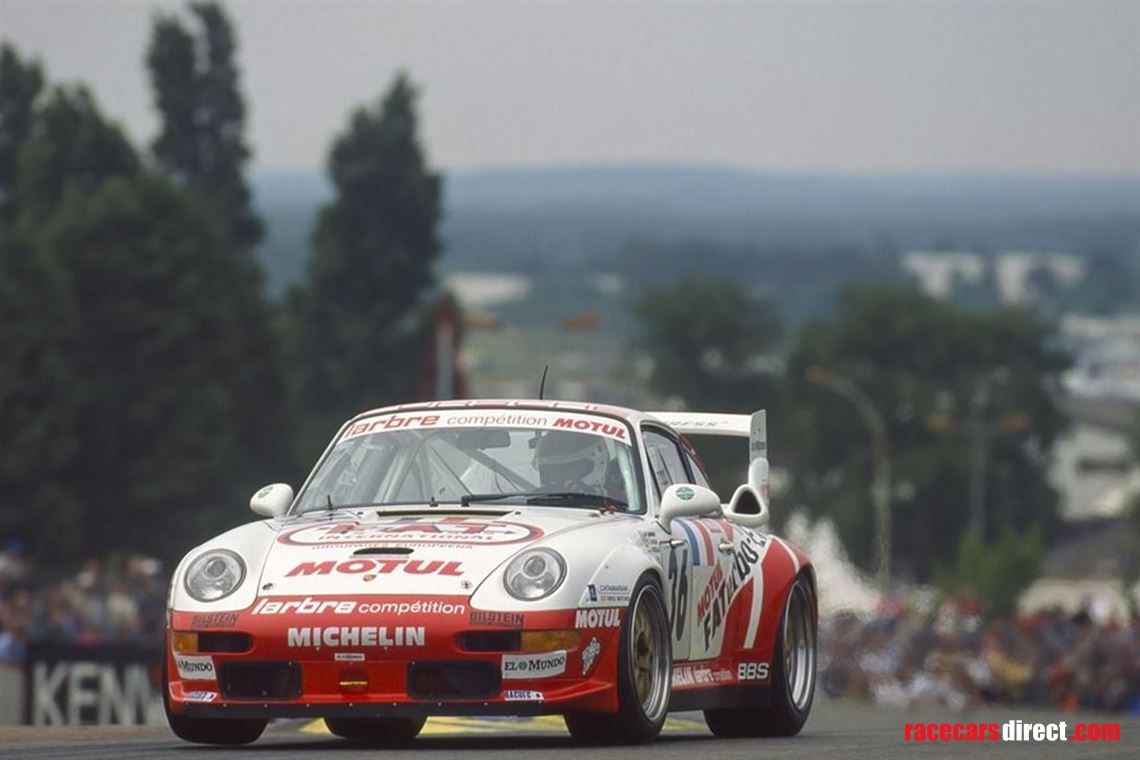 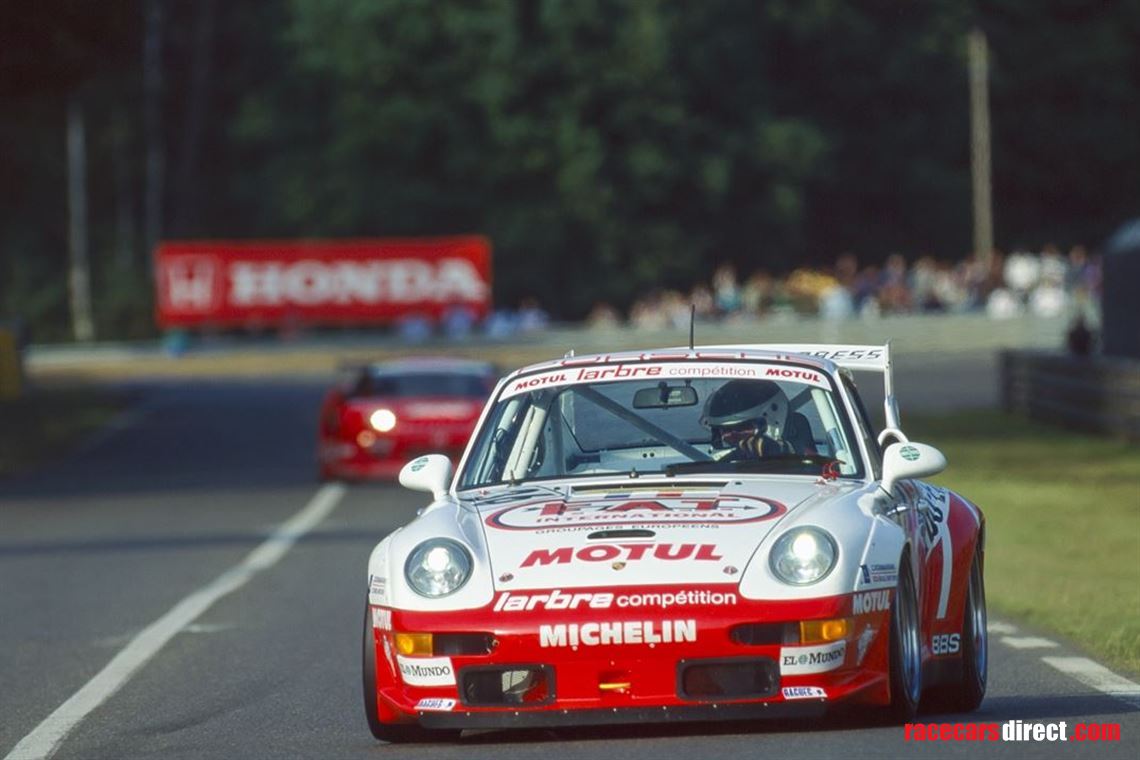 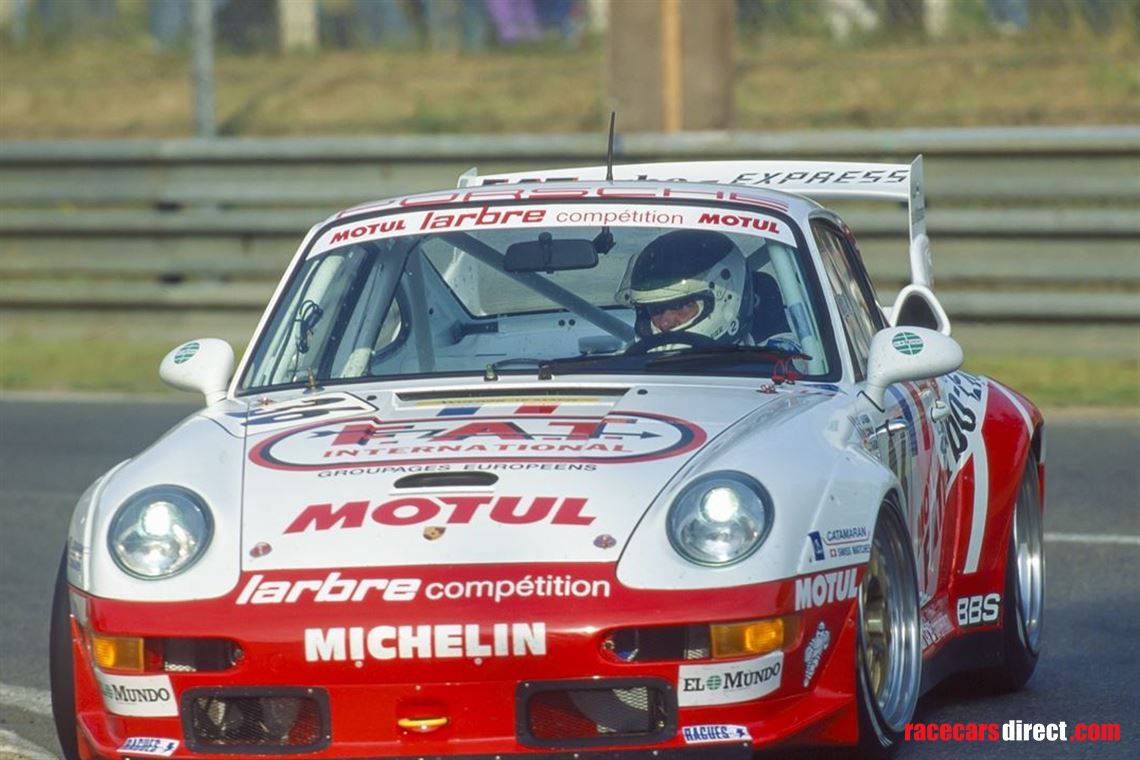 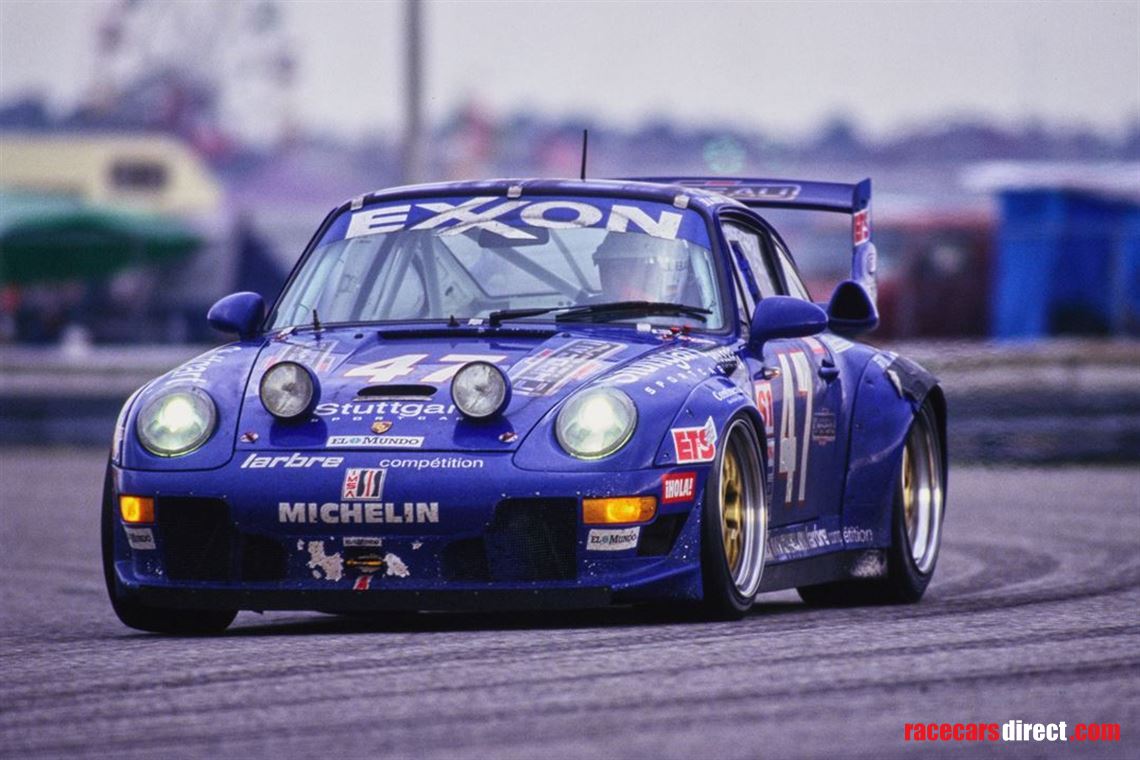 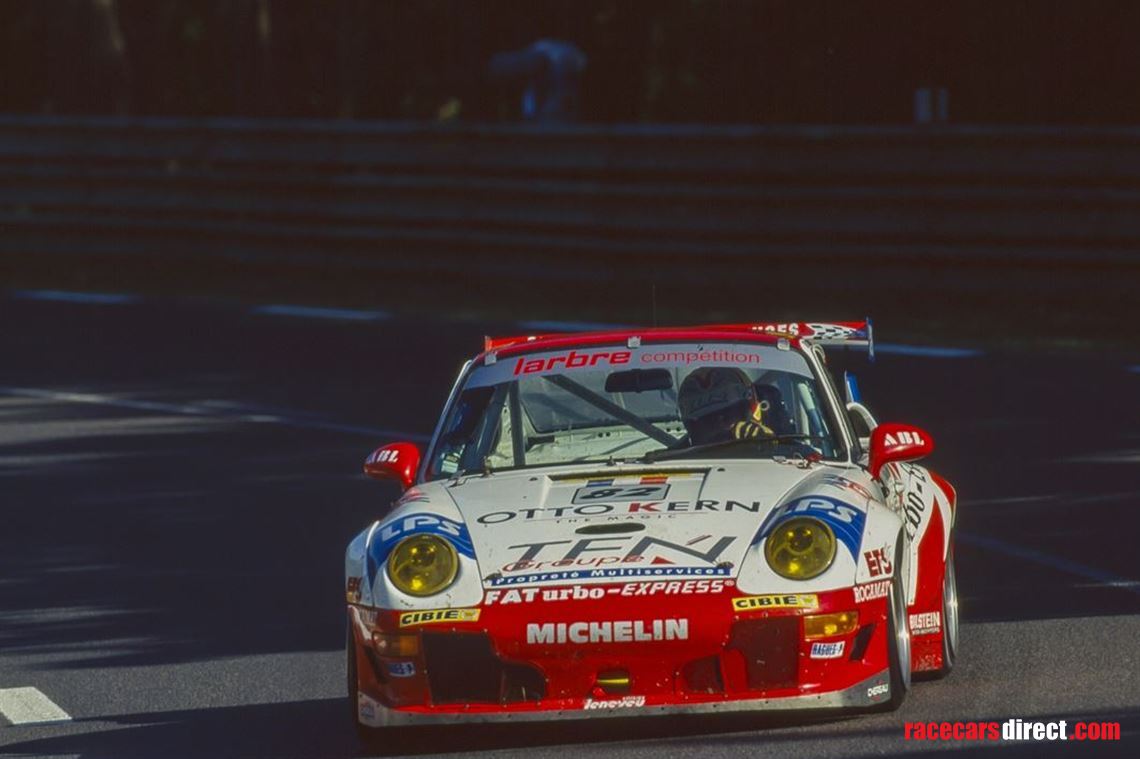 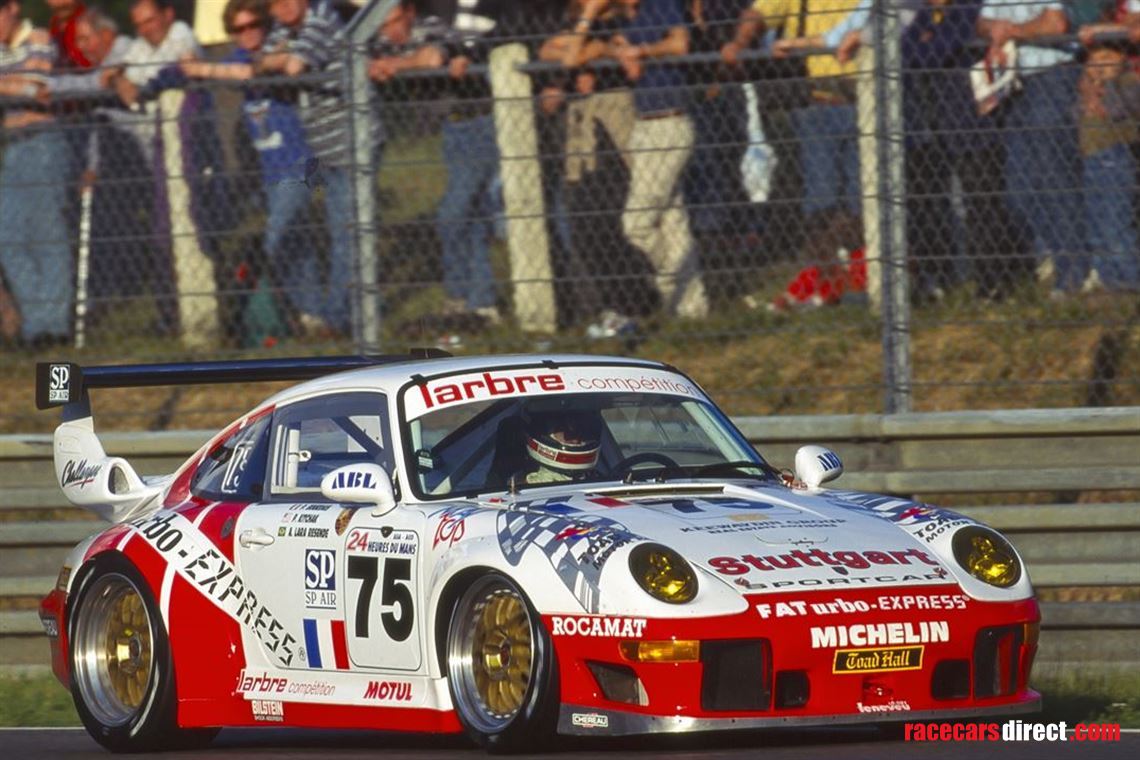 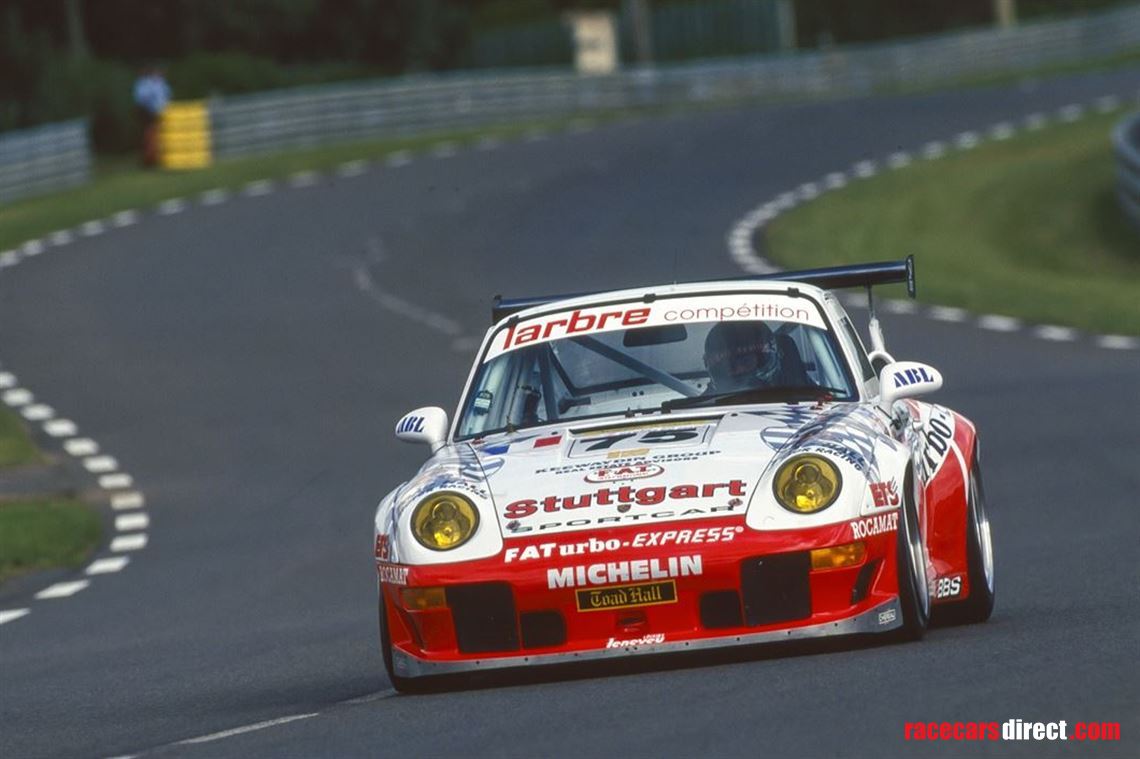 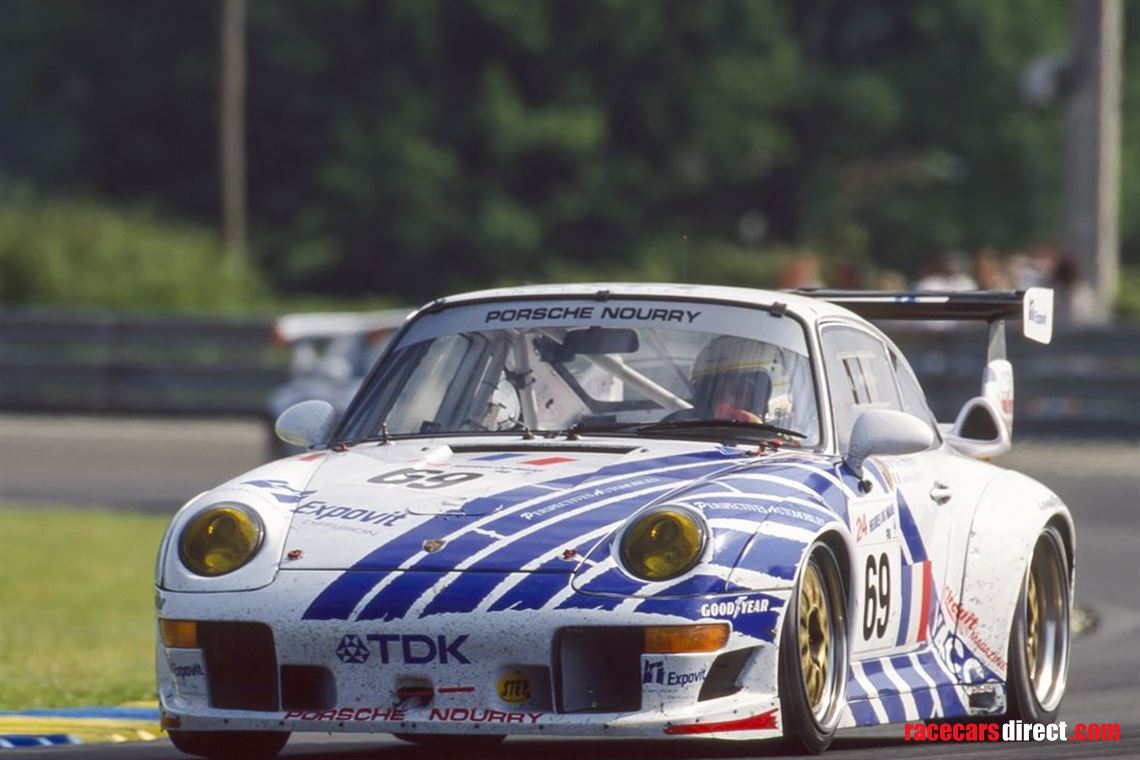 Driven by Formula 1 and Endurance legends

Ascott Collection is particularly proud to offer for sale this rare 1995 Porsche 993 GT2 EVO (#WP0ZZZ99ZTS393103) developed by the manufacturer to race in GT1.

During its first three years in the Larbre Compétition Team, this outstanding car enjoyed the support of the PORSCHE factory, returning to the parent company six times between the BPR races, the 24 Hours of Daytona and the 24 Hours of Le Mans.

Entered for four successive years in the 24 Hours of Le Mans, from 1995 to 1998, it was driven by F1 and endurance celebrities such as JP Jarier, Erik Comas, J Barth, Bob Wollek, etc….

Crowned winner of the French GT FFSA Championship in 1997, it won the title of vice-champion in 2002, just before the end of its career.

Acquired by its current owner in 2003, it has had only one owner in the last 17 years and has just undergone major restoration work.

This Porsche 993 GT2 Evo works car is eligible to compete in the most prestigious historical events in Europe and the United States.

In 1993, Porsche presented a new generation of its legendary 911s, named 993 for the occasion. A GT2 version was then developed, to meet the approval requirements for the category. The 993 GT2 had enlarged wings and a larger rear aileron with air intakes incorporated into its uprights to improve engine cooling. The 3.6-litre engine delivered 424 hp, which was increased to 444 hp in 1998. It was a “conventional” 993 GT2, but already a thoroughbred, designed to take on its competitors, the Callaway Corvettes, Ferrari 348 LMs, Honda NSXs, Lotus Esprits and Venturi 400 GTRs.

To win the 24 Hours of Le Mans, and excel in the GT series, which was sparking renewed enthusiasm in the mid-1990s, Porsche decided to develop a GT1 version of its 993. This was the 911 GT2 Evo. Indeed, after less restrictive regulations enabled the return of the GTs to the 24 Hours of Le Mans in 1993, numerous projects were developed. The GT1 quickly appeared as the category to go for to win in, both at Le Mans and elsewhere. This is why the factory decided to launch this 911 GT2 Evo, initially with three “official” cars. The chassis presented today (#WP0ZZZ99ZTS393103) is one of them.

The birth of the most radical of the 993 racing cars

To make its 993 GT2 even more radical and continue its (EVO)lution, Porsche reduced its weight to 1,100 kg and fitted it with a larger turbo-charger (KKK27 with 40.4 mm restrictors) to enable its 3.6-litre engine to deliver around 600 hp at 7,000 rpm. The linkage, pistons, camshafts, oil pump and even the injection and exhaust system have been optimized. The two turbos are more powerful and have a separate by-pass.

For the Evo, which inherited the modified body of the 911 GT2, the regulation allowed wider tyres. The wings were therefore enlarged still further. But that’s not all. The aerodynamics received particular attention, with a very high rear spoiler and a completely redesigned front spoiler with generous air intakes.

The 911 GT2’s base was reinforced with a welded safety bar, quick-open hood fasteners, an Air Lift System, and side air intakes for the turbocharger, and the optimized front spoiler with additional air intakes was designed for the ventilation of the brakes and oil radiator. There were also ventilated, perforated brake discs, ABS and an electro-hydraulic assisted foot brake.

The GT2 and GT2 Evo were first entered for the 24 Hours of Le Mans, then in the BPR Global GT Series championship, as well as in several other national championships. The track record of these legendary Porsches is impressive. The model presented here by Ascott Collection has the distinction of having been entered four times in the 24 Hours of Le Mans, in the 24 hours of Daytona in 1996, and having excelled in the French GT FFSA Championship. It was one of the first to be assembled by the factory.

The Le Mans, BPR and FFSA GT saga, with the Larbre Compétition team

#WP0ZZZ99ZTS393103 was the first Porsche 993 GT2 EVO to be manufactured by the Porsche factory, of a very limited series of three cars. Just after being delivered - on 1 June 1995, as can be seen on the original invoice for an amount of 570,000 German marks - the GT2 headed for Le Mans. It was part of a contingent of 10 Porsches. There was a single 993 entered by Freisinger. Six Porsche 993s were standard models prepared by private teams. The famous GT2 Evos made up the remaining three. The #WP0ZZZ99ZTS393103, like the second chassis entered by Larbre Compétition (#WP0ZZZ99ZTS393104), was registered in the GT1 category.

A GT2 in the GT1 category? Yes, because the two categories were actually quite similar. The requirements were the same or almost the same, namely that the car be derived from a model that was marketed, approved or approvable, as per the model in the catalogue. By choosing to switch its 911 GT2 Evo to the GT1 category, with the support of the Porsche works, Larbre Compétition was clearly aiming for a good performance in the overall standings. During the first quarter of the event, the two cars were in the Top 5 before being victims of racing incidents (crashing off the track, accident). No. 36 (#WP0ZZZ99ZTS393103) was standing 4th overall when its driver (Jésus Pareja) came off the track in the rain.

The front of the car was damaged and the car went back to the factory to be repaired and painted in blue to receive the sponsor Gitanes Blondes. The Porsche invoice of July 14, 1995 specifies that the car’s front unit was replaced.

It then raced at the 1,000 kilometres of Suzuka with its new blue Gitanes Blondes livery, driven by JP Jarier and Bob Wollek, where it finished in 4th position, and then at the 3 hours of Zhuhaï, where it retired.

1996, the start of the season began with the 24 Hours of Daytona

In 1996, the racing programme was more intense. The start of the season began with the 24 Hours of Daytona. Some extra equipment was required to race in Daytona. Our Porsche was fitted with a roll bar reinforced with horizontal bars at driver level and the windshield fixing was backed up by the addition of fasteners at top and bottom. These two additions have remained on the car.

It finished in 26th position. The commitment to the BPR championship intensified and a return to the 24 Hours of Le Mans was scheduled. But this time, the Porsche was entered in the GT2 category. This was inevitable because up at the front, the GT1s had been beefed up. The McLaren F1 GTRs, Chrysler Viper GTS-Rs, Lister Storm GTSs and Toyota Supra LMs had arrived. At Porsche, in parallel with the semi-official GT2 Evo, the German engineers spent the winter developing a new car: the Porsche 911 GT1. The two cars No. 25 and No. 26, that were entered officially, no longer had much in common with their 993 bases …

But Porsche continued to support Larbre Compétition. The car went back and forth to the Porsche workshops throughout the season to make improvements to the chassis and engine. In all, it went to Germany six times, even having its livery painted there!

In 1997, in endurance, the programme focused solely on the 24 Hours of Le Mans. Patrick Bourdais, Peter Kitchak and André Lara Resende retired. But the season was crowned with success in the French GT Championship. Patrice Goueslard and Christophe Bouchut excelled! They won the title of French Champions thanks to their consistency with the GT2 Evo: 10 victories out of 12 possible, at Dijon, Val de Vienne, Paul Ricard, Albi and finally Magny-Cours!

Michel Nourry’s debut at the 24 Hours of Le Mans

For the 1998 season, our Porsche 911 GT2 Evo changed hands and was now entered by the Nourry Compétition team. It allowed Michel Nourry to make his debut at the 24 Hours of Le Mans!

In the first race in the French GT championship at Nogaro, the duo Michel Nourry/ Thierry Perrier won a spot on the podium. Michel Nourry broke his hand while competing in the Porsche Cup race (he was entered in both disciplines). Thierry Perrier, alone, won a new podium position in the second race of the weekend.

The programme then continued with the prequalifying session of the 24 Hours of Le Mans and then the race itself. The team didn’t want to take the risk of “breaking” their machine by competing in the race organized at Spa-Francorchamps before Le Mans. At Le Mans, it was Thierry Perrier who was given the job of qualifying the car in the preliminary tests, since Michel Nourry was still suffering pain in his hand. Jean-Louis Ricci joined the team.

On the first night of testing, the engine failed. Michel Nourry and Jean-Louis Ricci couldn’t complete their laps in night conditions as required by the rules. They had to do this the next day, not without difficulty, after the gearbox decided to slow things down.

Michel Nourry started the race and gained more than 10 places during his stint. Midway through the night, the GT2 Evo lay in 8th position. Some time was lost in the early morning with a pit stop. The brake pads and discs had to be changed. But the first serious warning came just after daybreak. At 6:44 am, Thierry Perrier suffered a broken right-hand shaft drive. A failure that was to reoccur a little later with, each time, more than 20 minutes lost in the pits. Finally, a turbo was replaced during the morning session. But the car finished in 18th position, and 4th in the GT2 category.

It took part in several FFSA GT races in 1998 and 1999 before being acquired by the Alméras brothers in October 1999.

In 2002, it finished Vice Champion of the French GT FFSA Championship, driven by Marc Sourd & Steve Hiesse, after winning 4 races. At that time it was sponsored by Martinet and painted in white, green and orange.

Since 2003 with he current owner

Acquired by the current owner in 2003 from the Alméras Brothers, our Porsche competed up until 2016 in several historical events of the Porsche Club of France and the HWM GT Championship.

In 2019 and 2020, major work was carried out including the overhaul of the 3.6-litre single-ignition engine, the turbos, and the TAG box.

The car was also repainted. The work of stripping the body brought to light the car’s various previous liveries – the white of Le Mans 1995, then the blue of the end of the year and Daytona 1996, again the white, then the green and orange when it raced with the Alméras Freres team in the colours of Pierre Martinet. This fantastic car has its Porsche certificate of authenticity.

Having now recovered its 1995 Le Mans 24 Hours livery, it is available for purchase to join a collection or to compete in the series of historic races it’s eligible for.