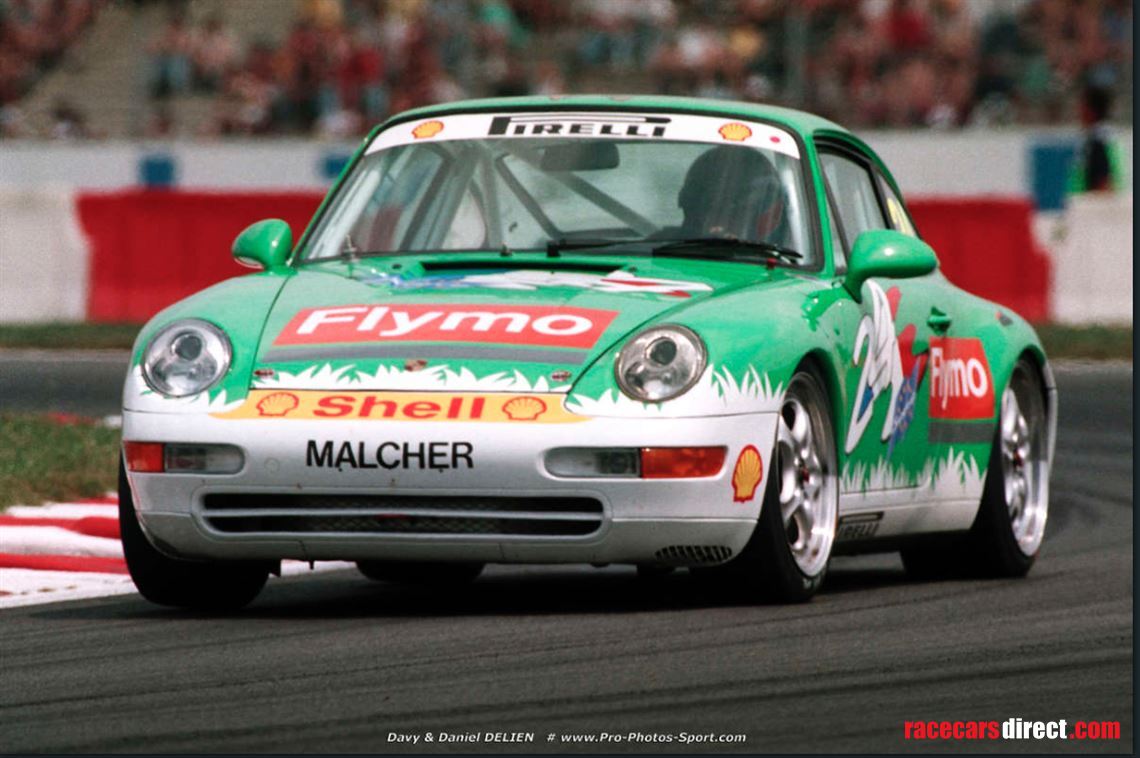 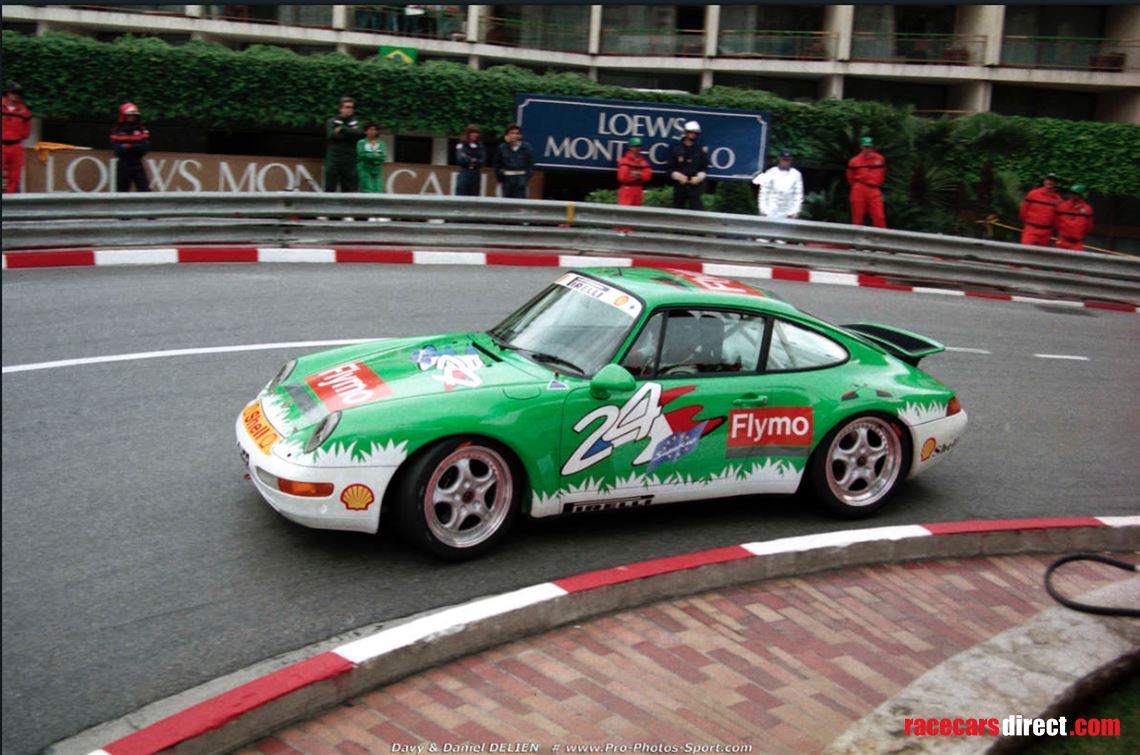 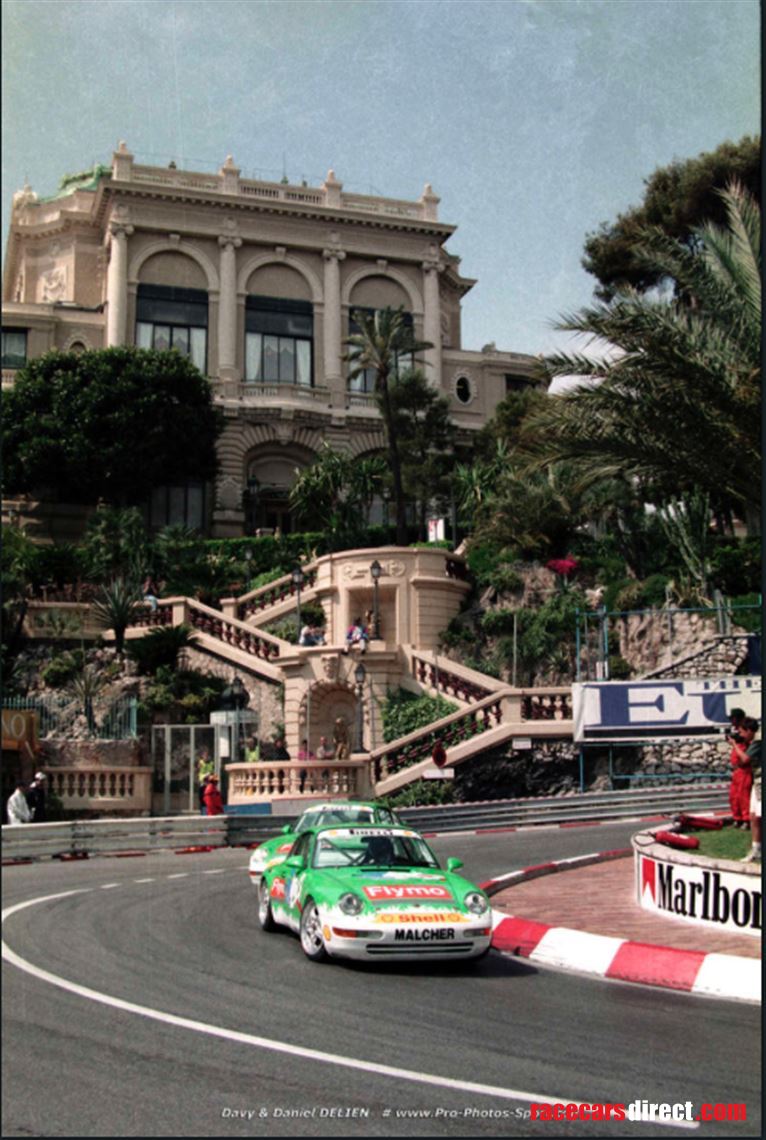 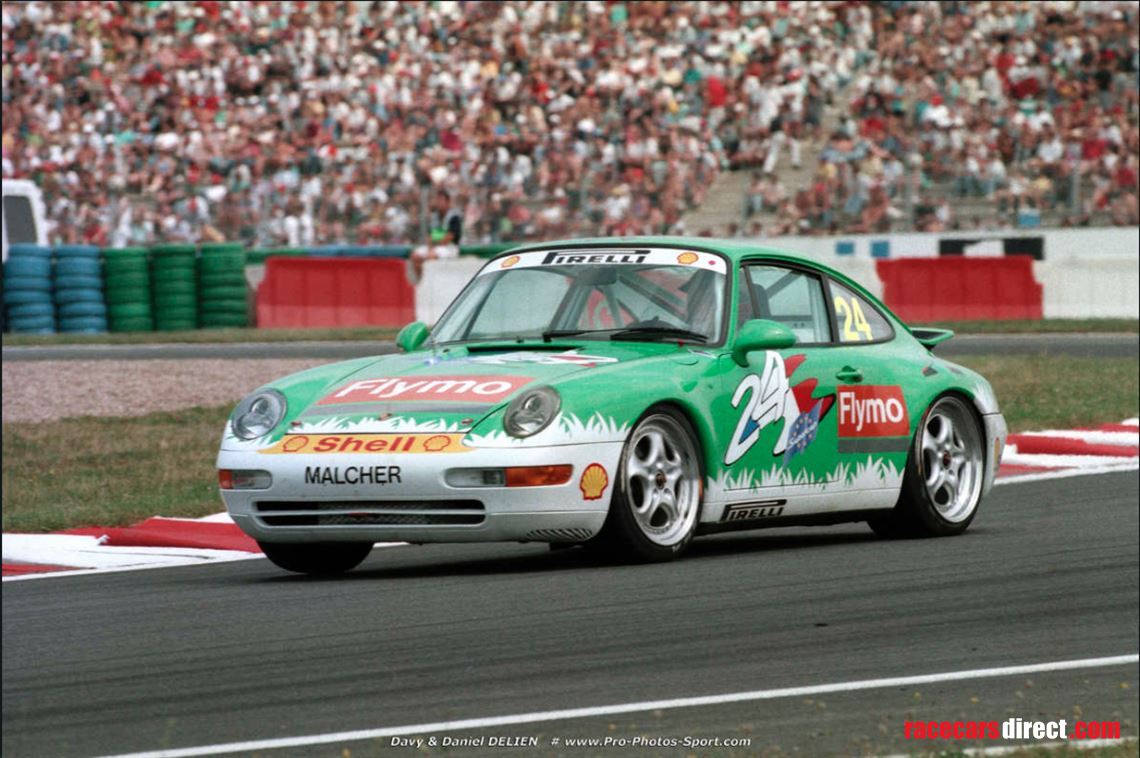 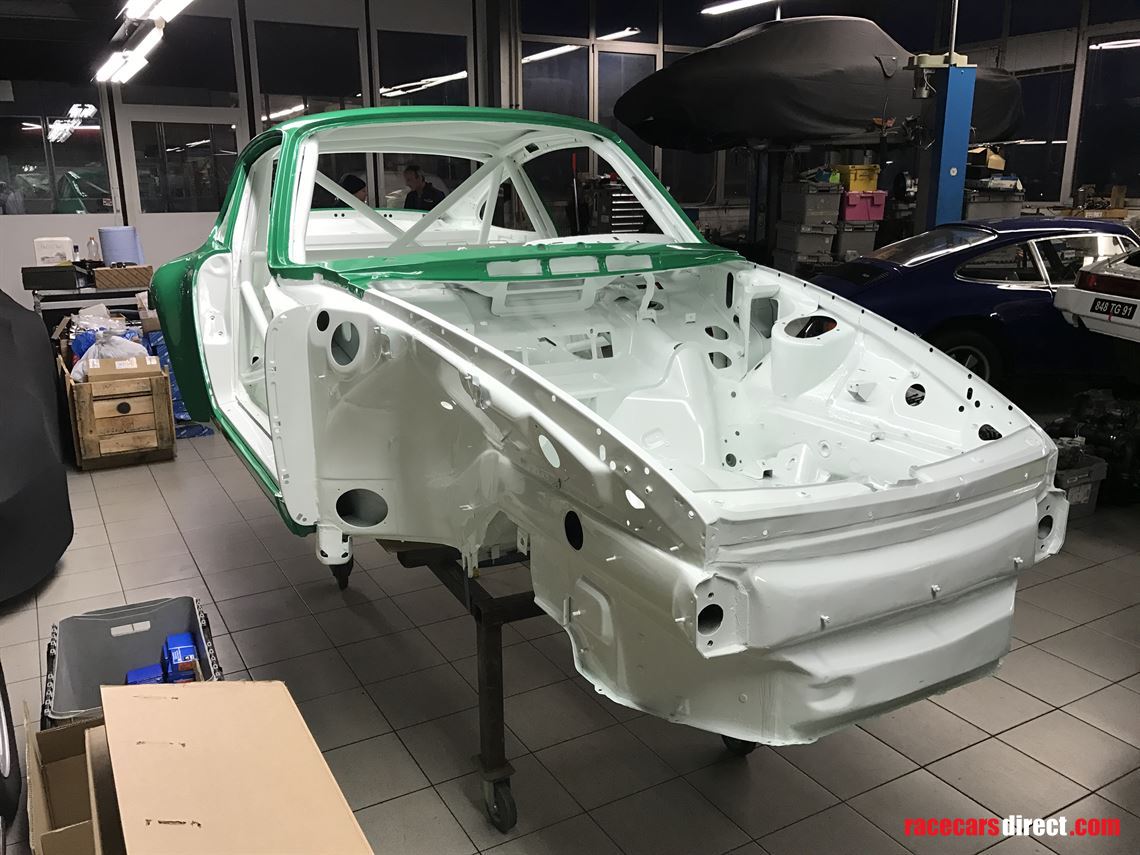 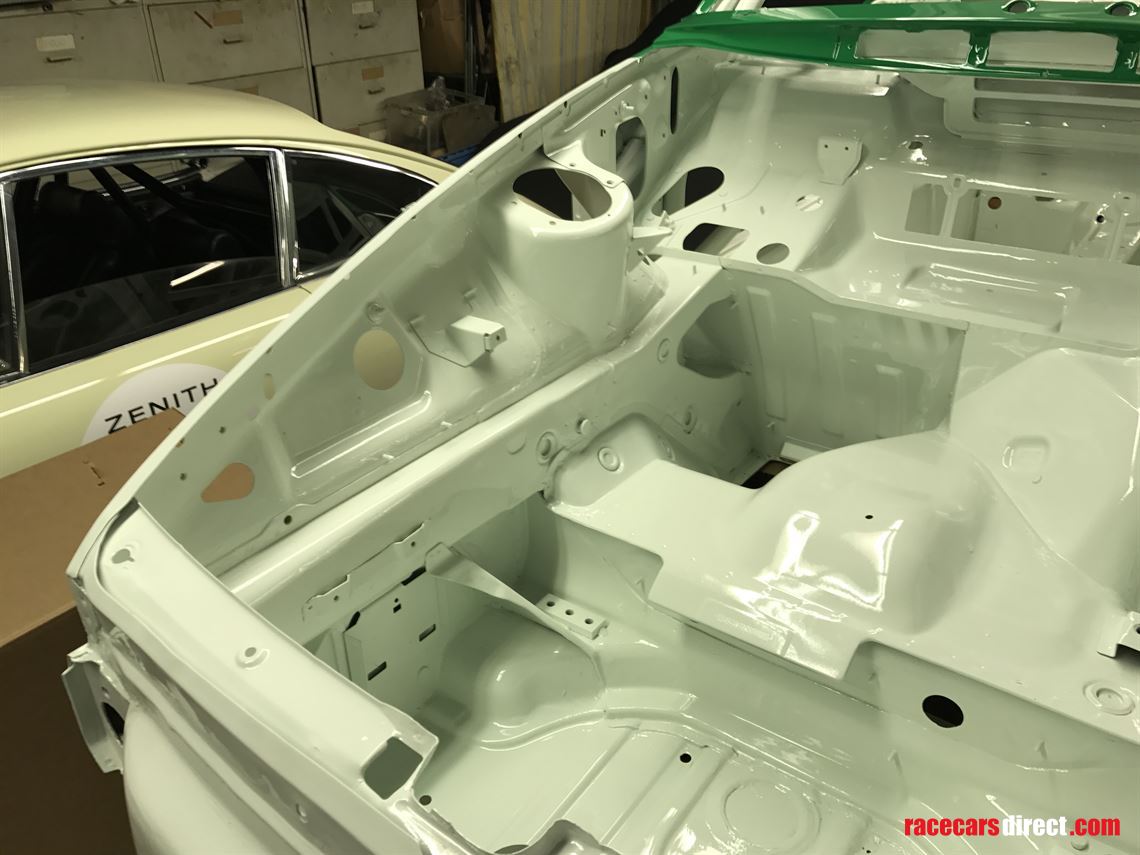 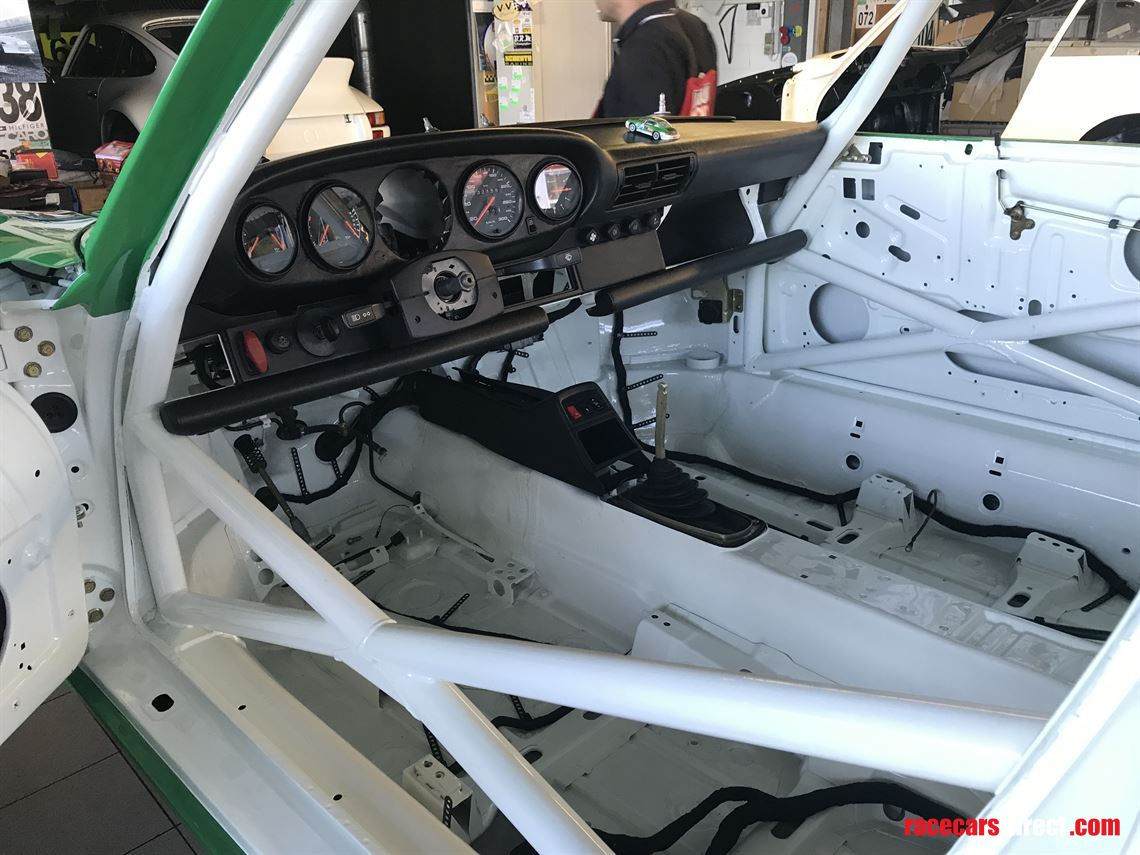 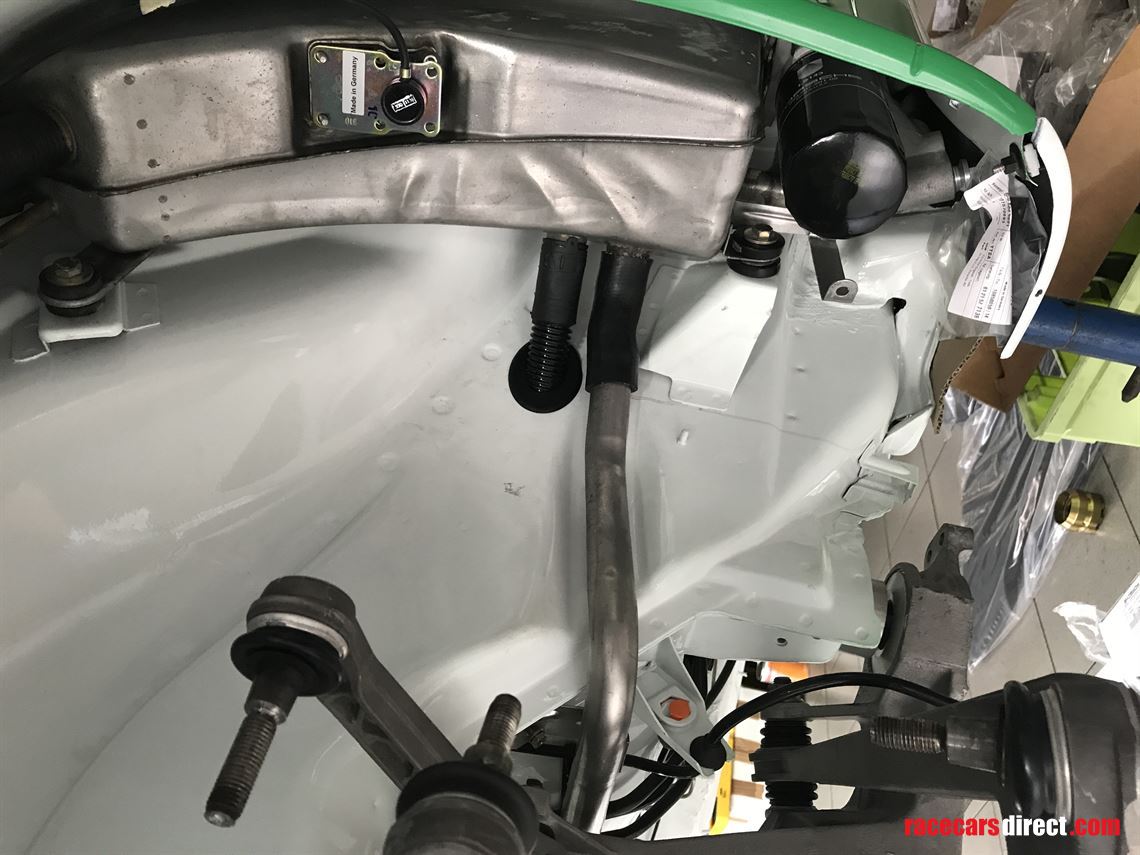 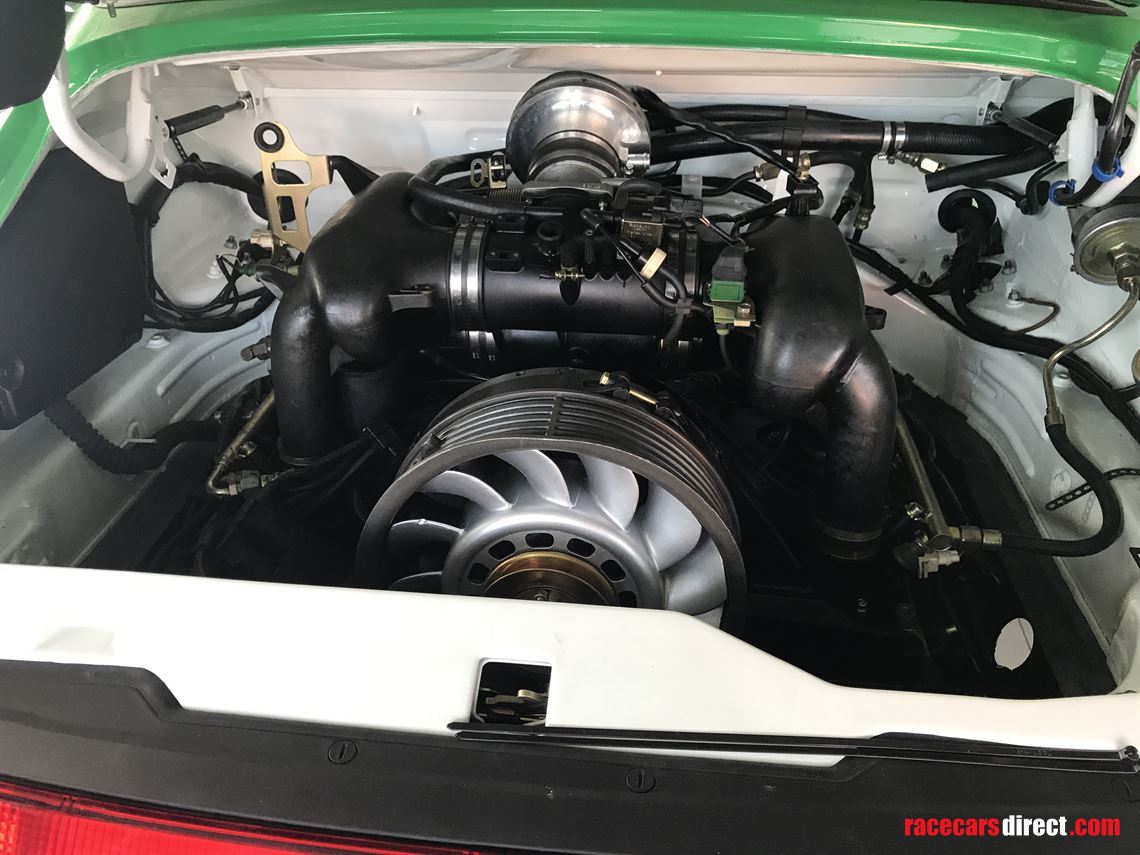 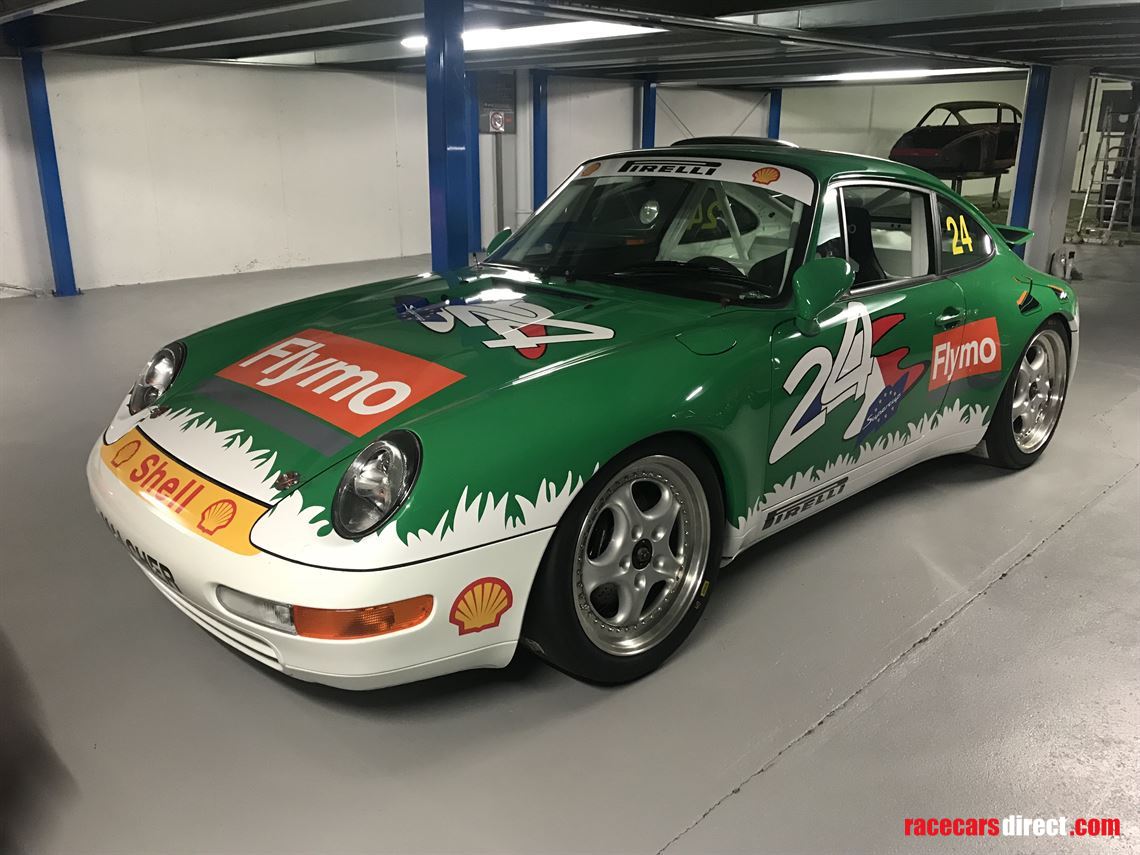 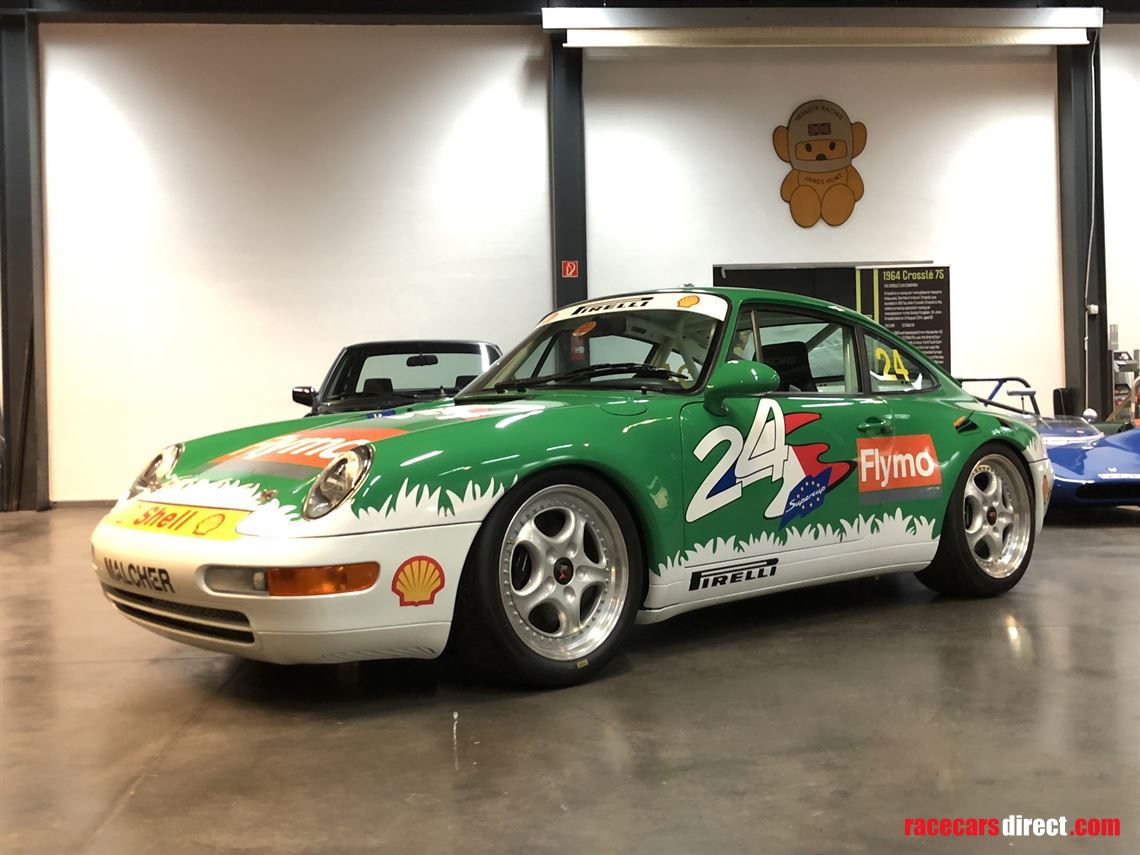 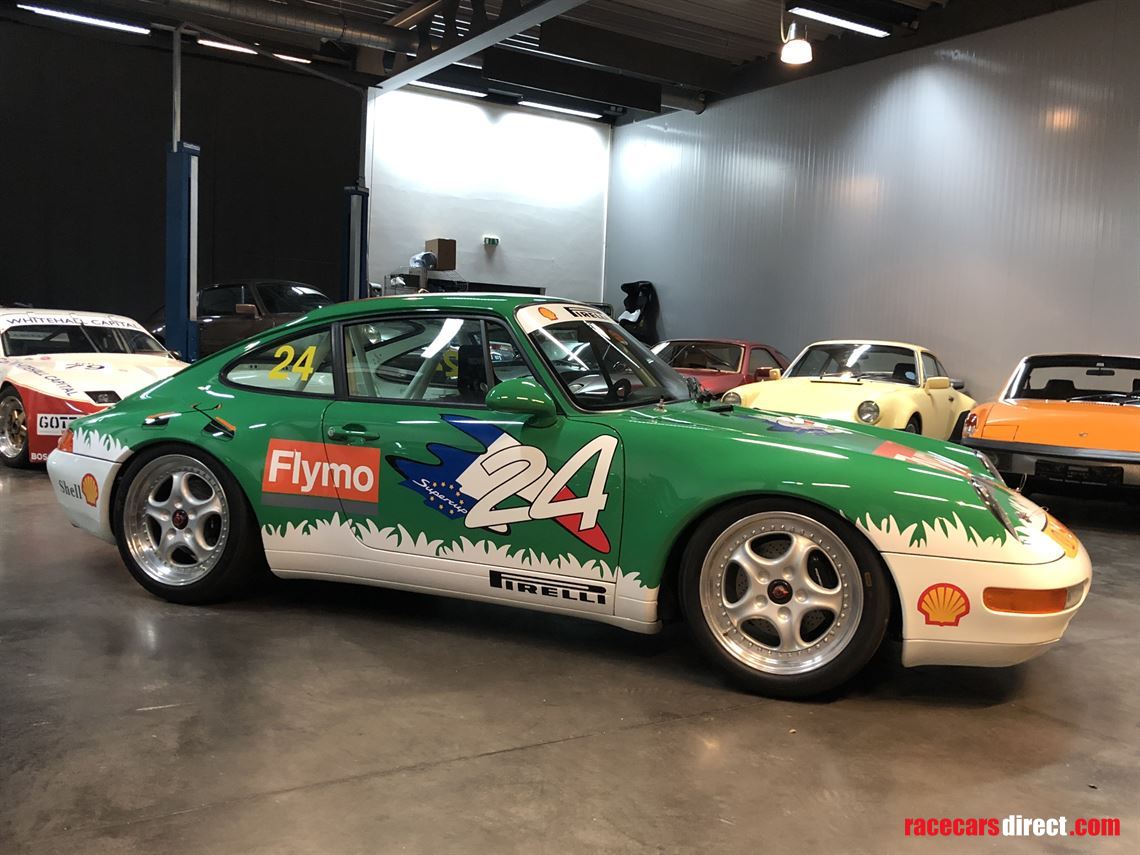 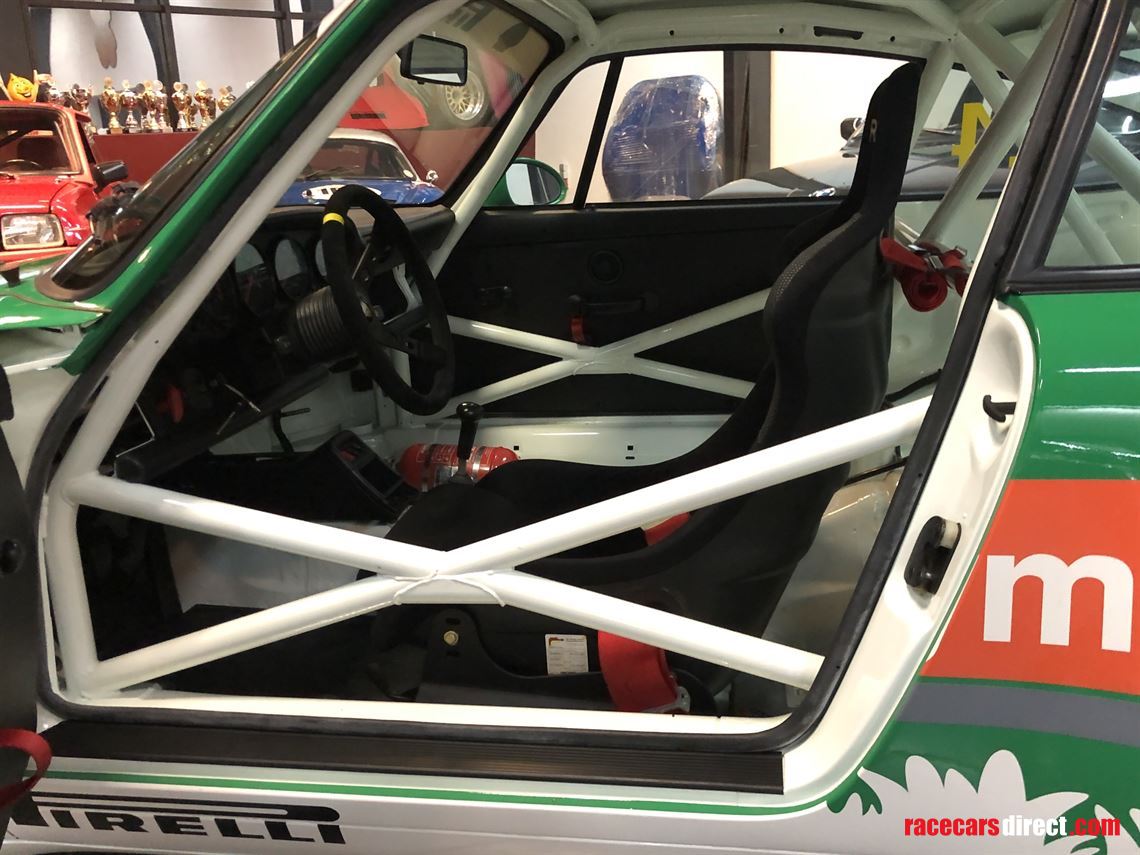 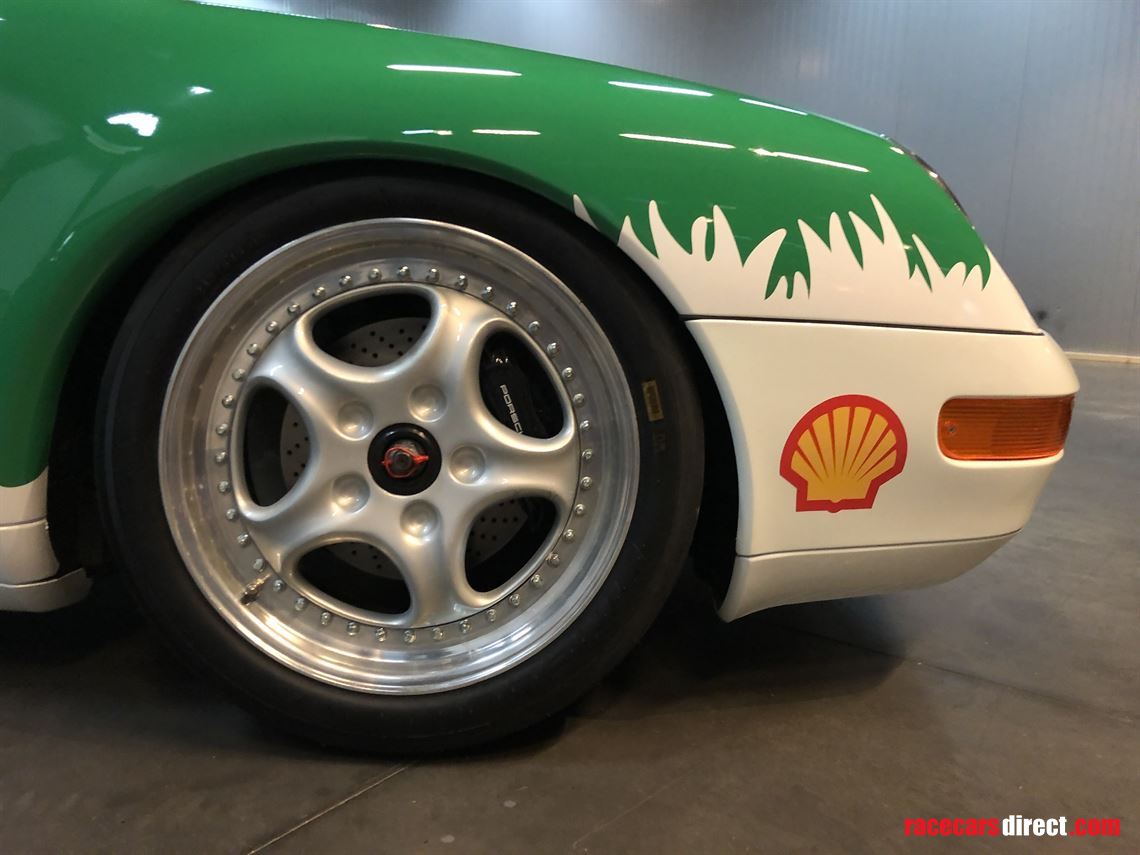 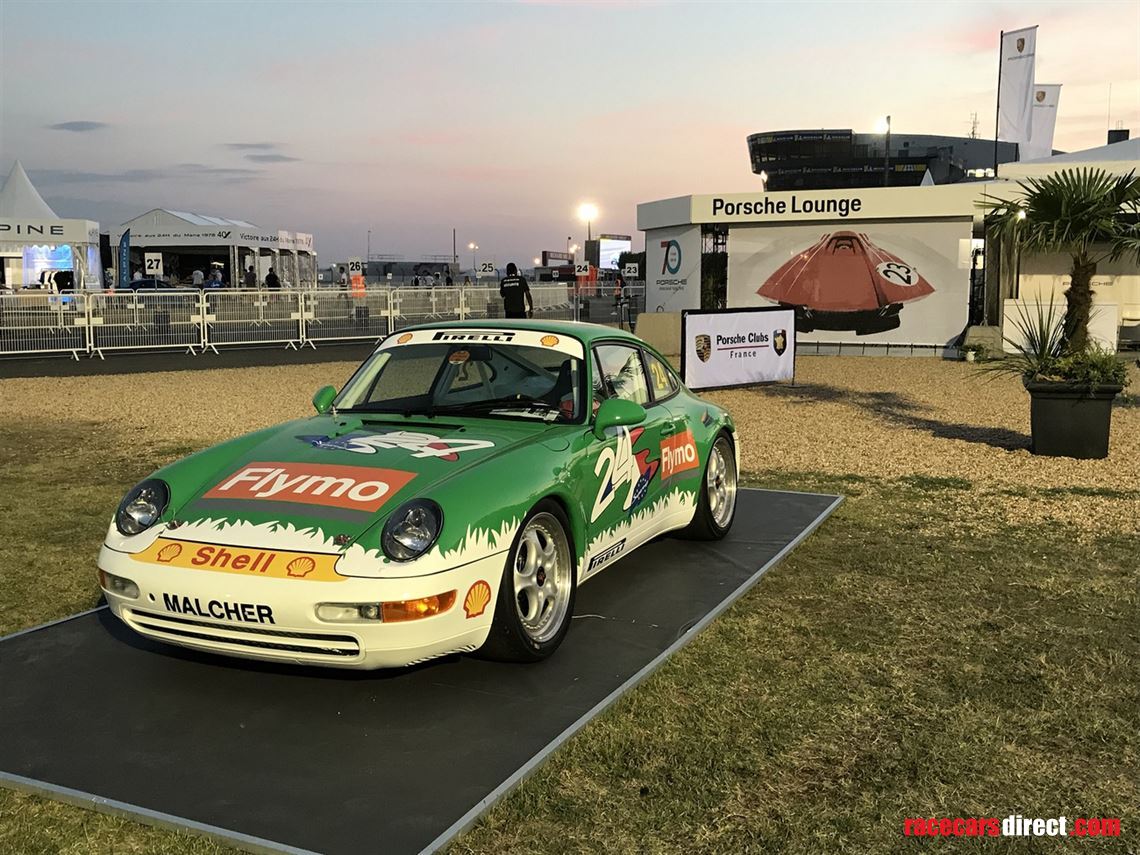 > Restored to as new conditions by Marc de Siebenthal in Swiss. Perfect in details.
> One of the most successful cars in the Supercup 1994/95
> Never seriously damaged
> Full History and passport
> 2 books of History and restoration

Based on the new 993 Carrera 2 coupe, the 993 Cup 3.8 was developed at Porsche’s competition department to replace the 964-based Carrera Cup 3.6 racer. Aimed squarely at the 1994 Supercup series, it utilized a new 3.8-litre M64/70 engine. This powerplant developed 315 bhp at 6,100 rpm, 40 more bhp than the earlier 3.6 Cup engine, and gave the car a top speed of 280 km/h. The new engine had a rev limit of 6,900 rpm, but as it utilized many valve-train components from its sister RSR, was capable of turning safely as high as 7,900 rpm. Power was delivered through an upgraded six-speed G50/30 manual transaxle with 40% limited-slip. A Matter rollcage was welded in, greatly improving chassis stiffness, but the car was otherwise stripped, losing its power steering, upholstery, carpeting, trim, and sound insulation. A single Recaro racing seat with Sabelt harness, a Momo steering wheel, a fire suppression system, and air jacks were installed. The suspension was uprated and ride height lowered. Huge ventilated and cross-drilled disc brakes with five-channel ABS fronted 18-inch diameter Speedline three-piece center-lock wheels. An aluminum front hood, deletion of door reinforcement beams, and use of thinner side glass and a plastic rear window brought the 993 Cup racers’ weight down to a mere 1,100 kg. Interestingly, for 1994, these cars ran without front and rear spoilers, essentially in standard bodywork.

This example was completed March 25, 1994. It was sold to Sonauto Espace Plus Competition, and entered by JMB Racing in the 1994 Supercup series for French automotive writer and racing driver Jean-Pierre Malcher. This popular series which was a support race for the Formula 1 World Championship. Therefore, it attracted many top-level drivers and ex-Formula 1 driers including Ralf Schumacher and Mika Häkkinen. Malcher’s well-prepared #24 ran consistently near the front of the crowded grids to reach the podium four times in nine races. Sponsored by garden equipment manufacturer Flymo, Malcher finished an impressive third overall in the end-of-season standings behind full-time professionals Uwe Alzen and Emmanuel Collard.

At the end of the 1994 season, this car was sold to Patrice Goueslard, who won the France Championship B category in 1995 driving for Larbre Competition. In 1996 it was purchased by French driver Michel Nourry. The car resided in Belgium from 1997-2000 and raced in the Belgian ProCar Championship, and in 2000 was sold to M. Keller of Luxembourg. Later it was sold to a Porsche collector in Switzerland and entrusted for a total restoration to the well known and highly respected Porsche expert Marc de Siebenthal. It was striped down to bare metal and everything was overhauled and done like it was in 1994 in each detail. After the restoration was finished in 2018, the car was presented by Porsche France at LeMans Classic. It was never raced after the restoration and is in as new condition.

So this beautiful 1994 Porsche Supercup racer has been fully restored and wears its dazzling original Flymo livery. Displaying just 32,162 km on its odometer, it is supplied with a specification sheet from Porsche France, along with a copy of the April 7, 1994 issue of Auto Hebdo in which Malcher and his Supercup Porsche are featured.

World Class Race teams ready to run your Radical for the 2021 Championship season.

Engine stripped for inspection never rebuilt due to other projects