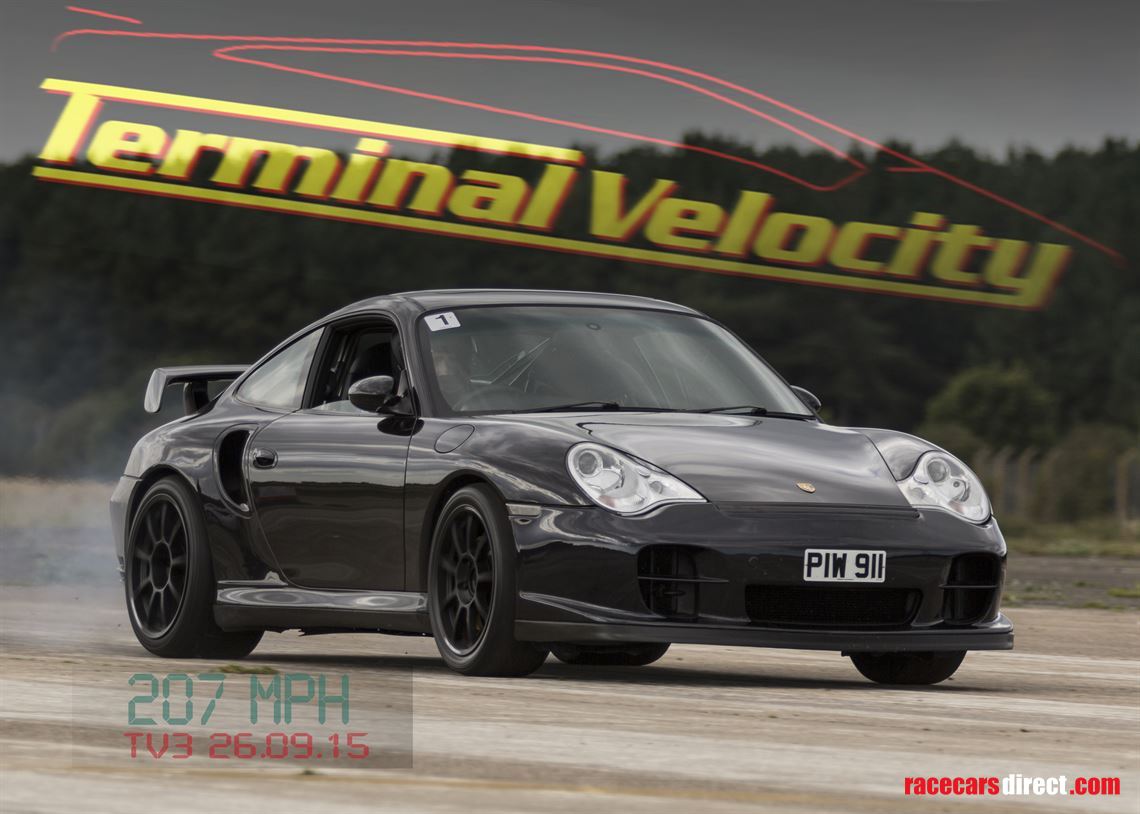 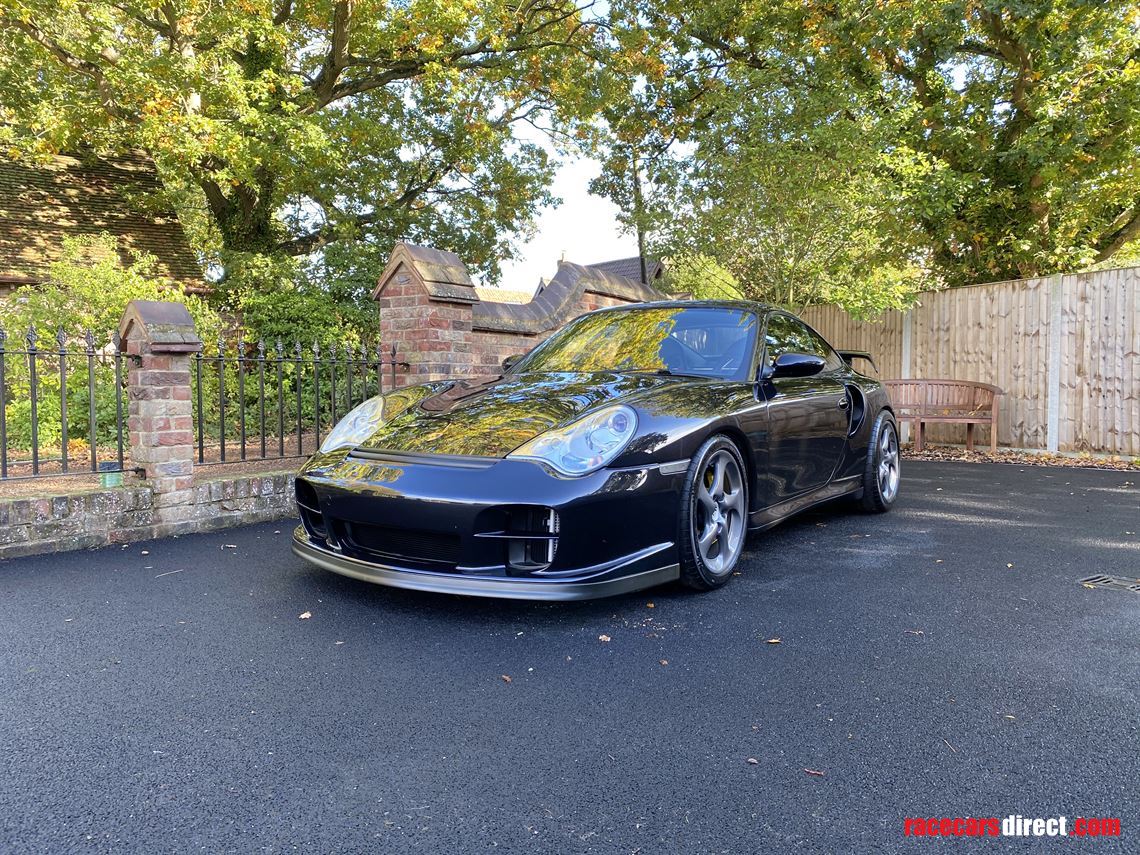 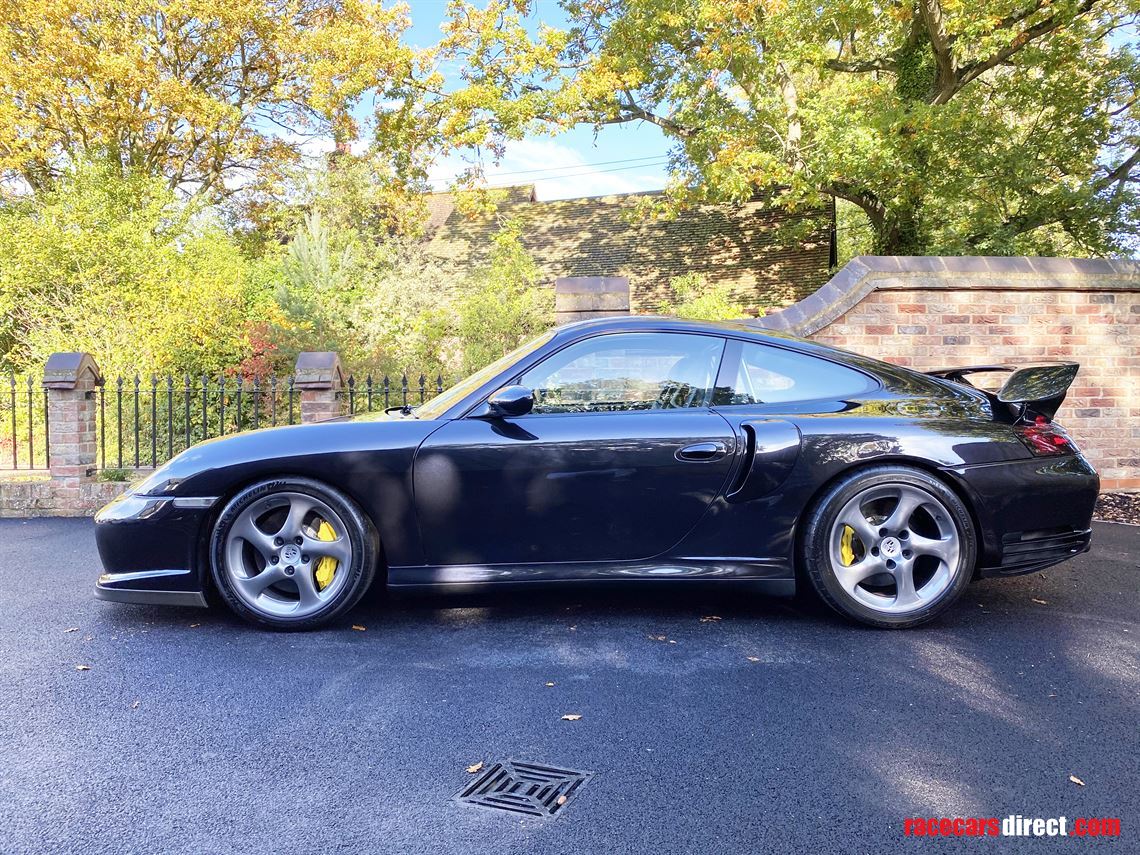 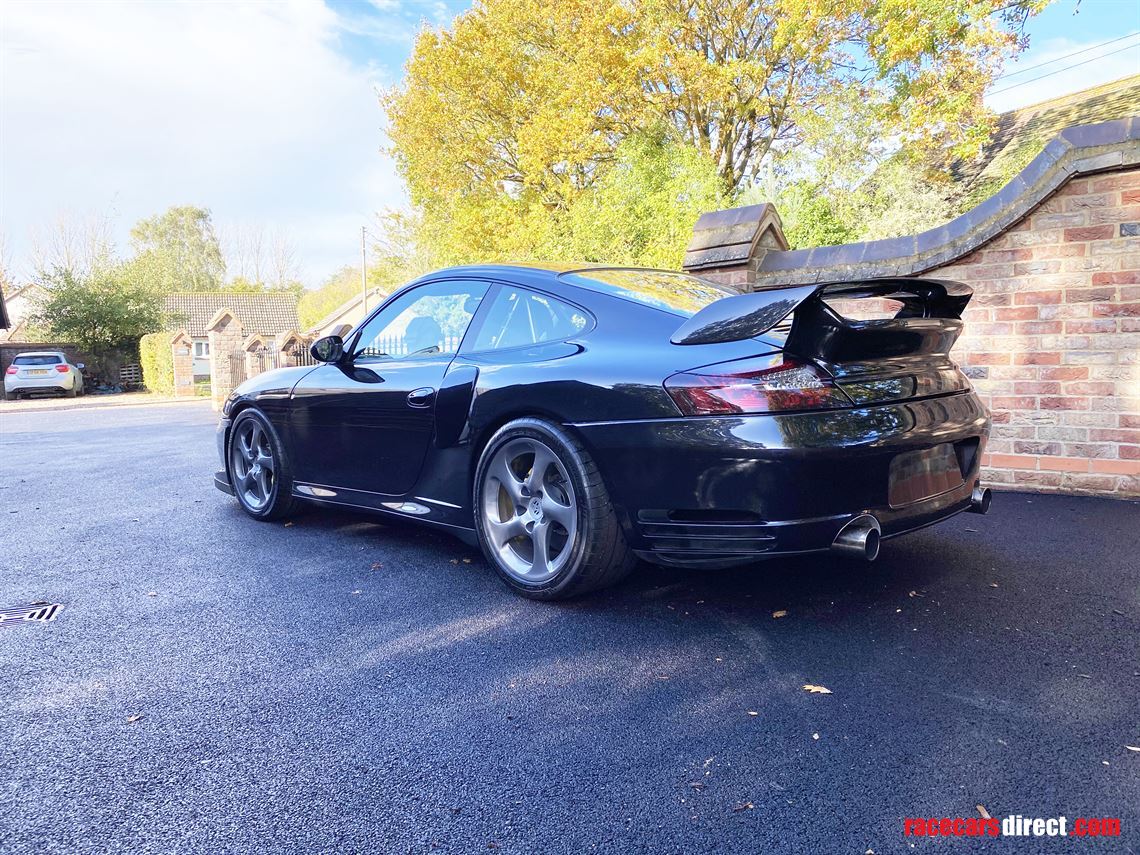 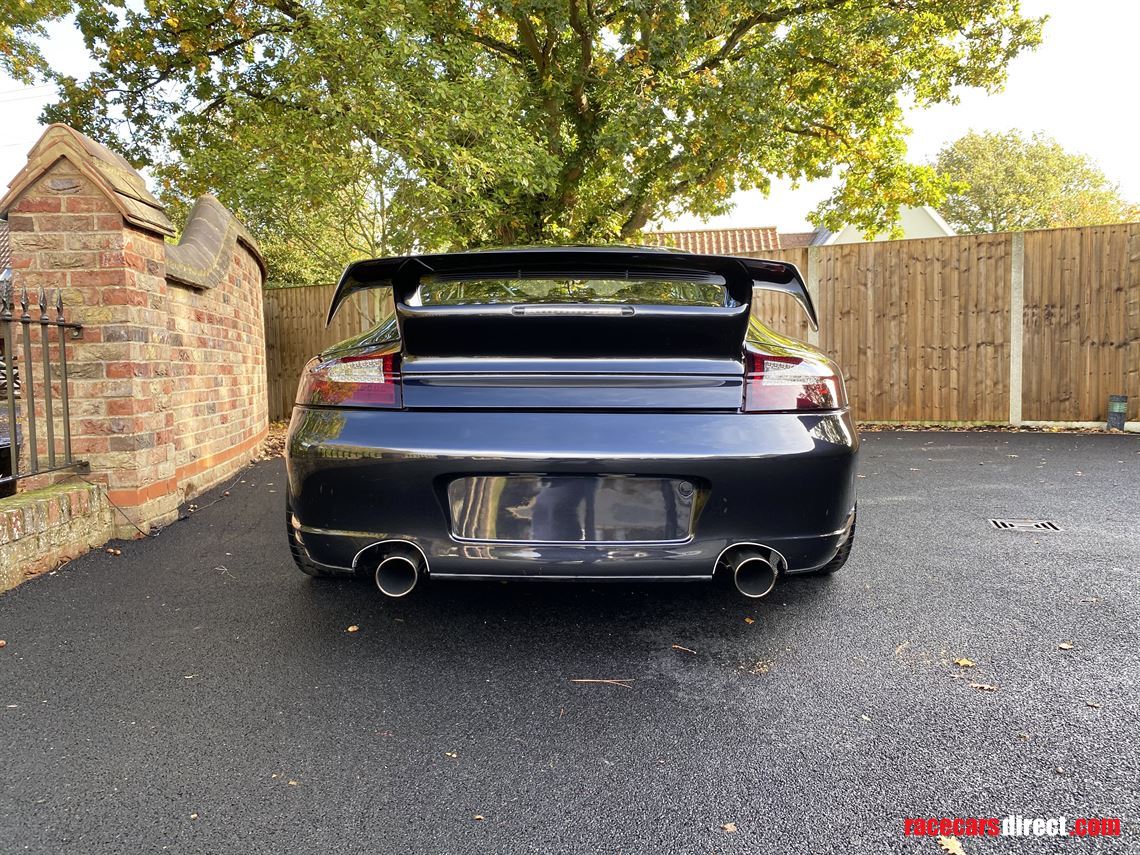 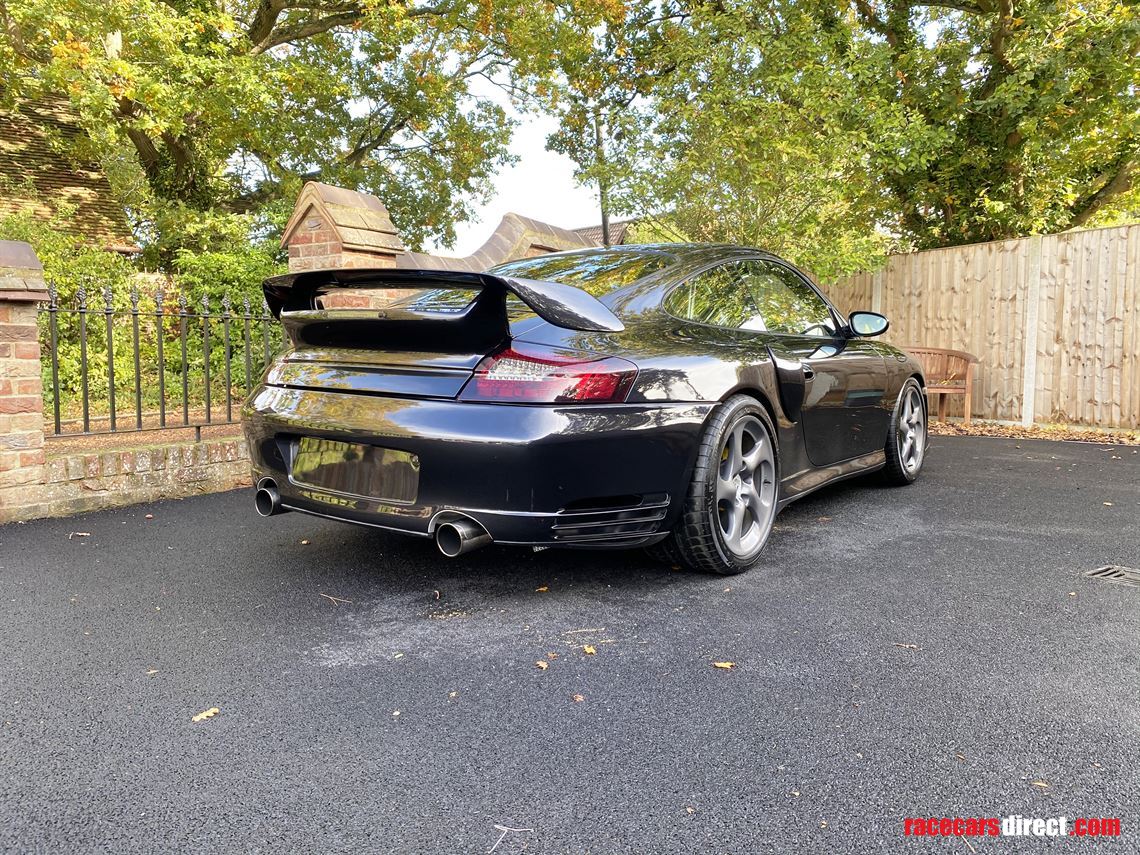 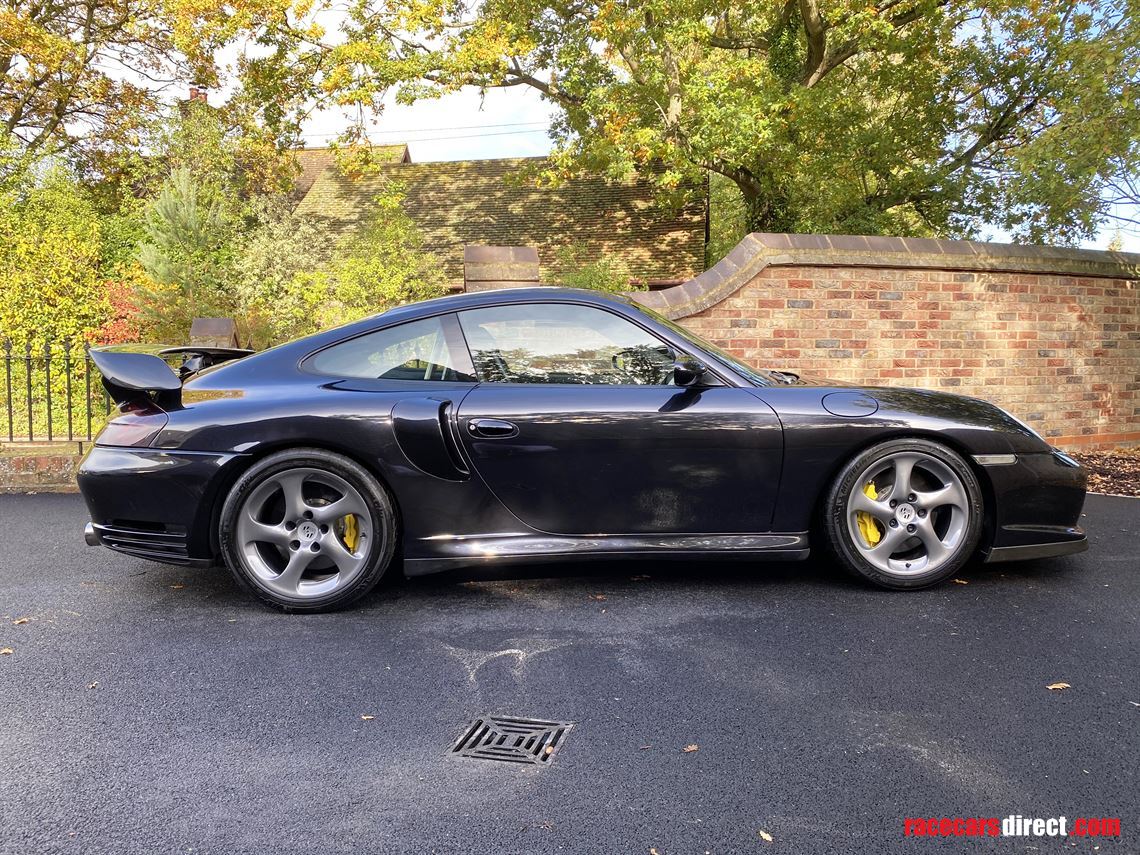 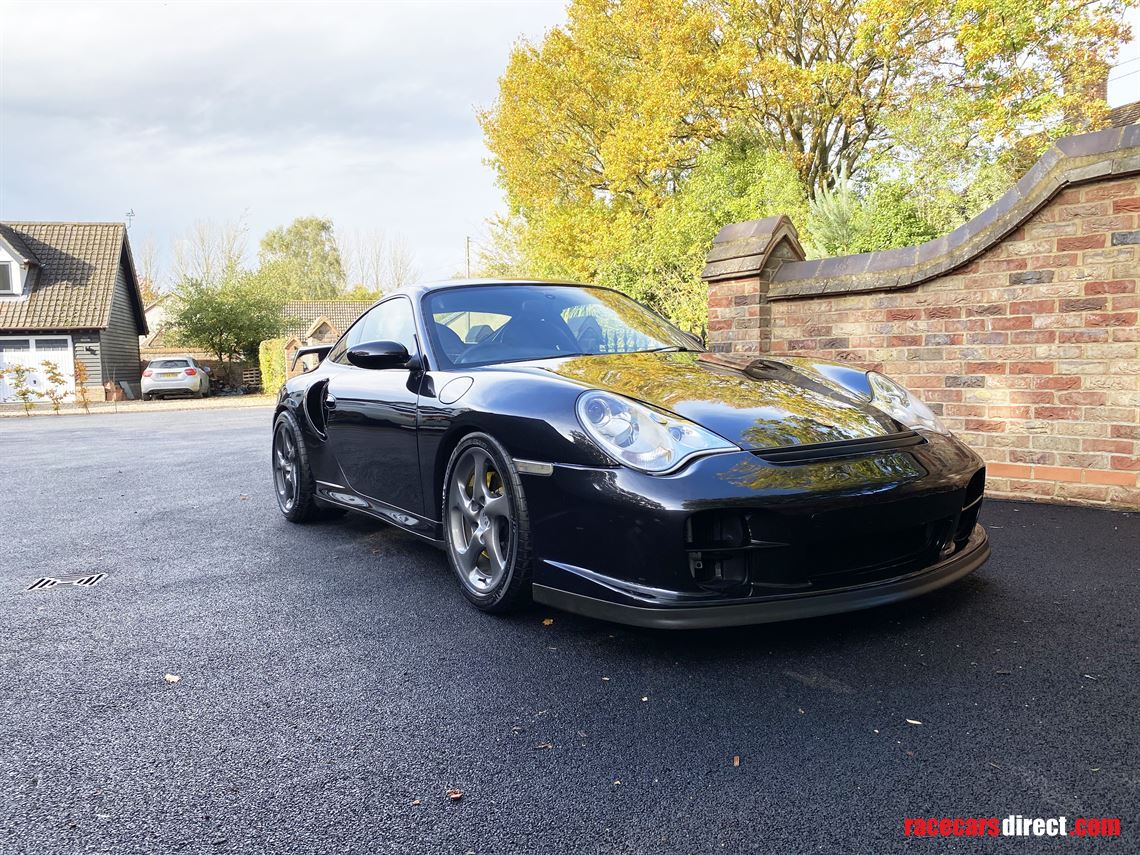 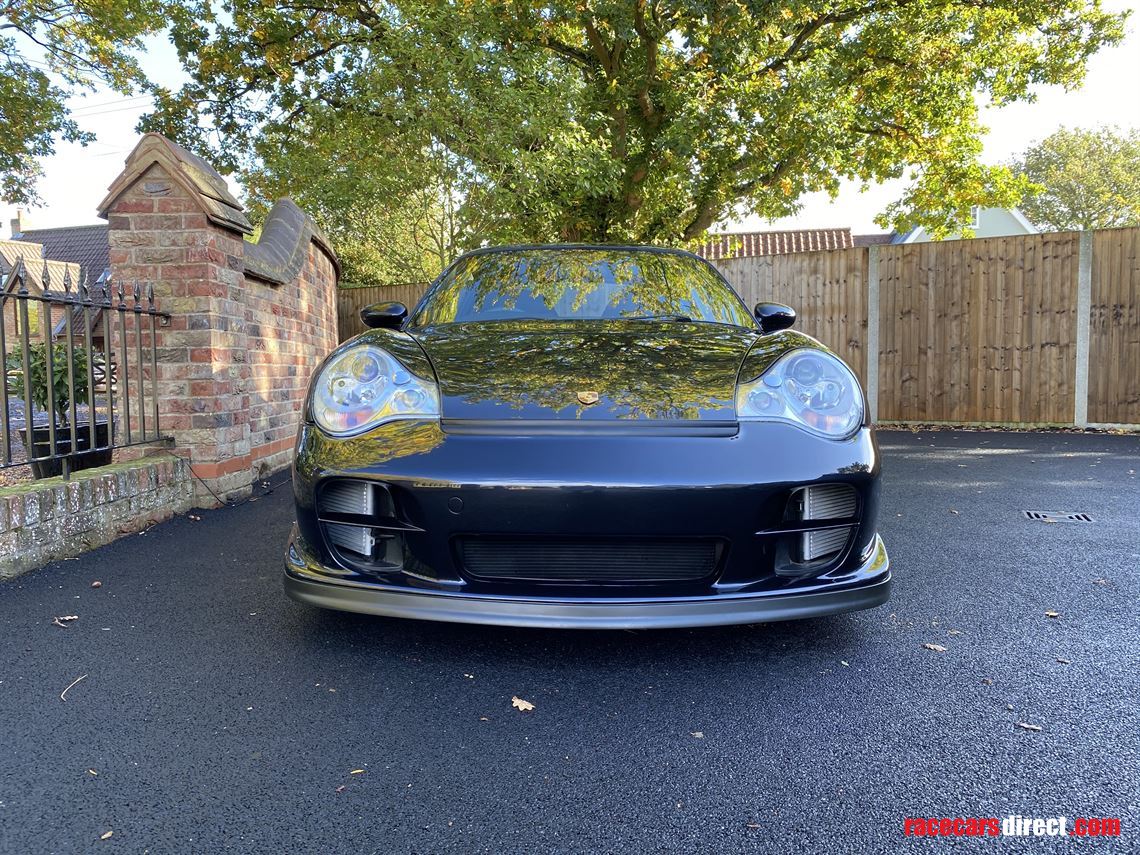 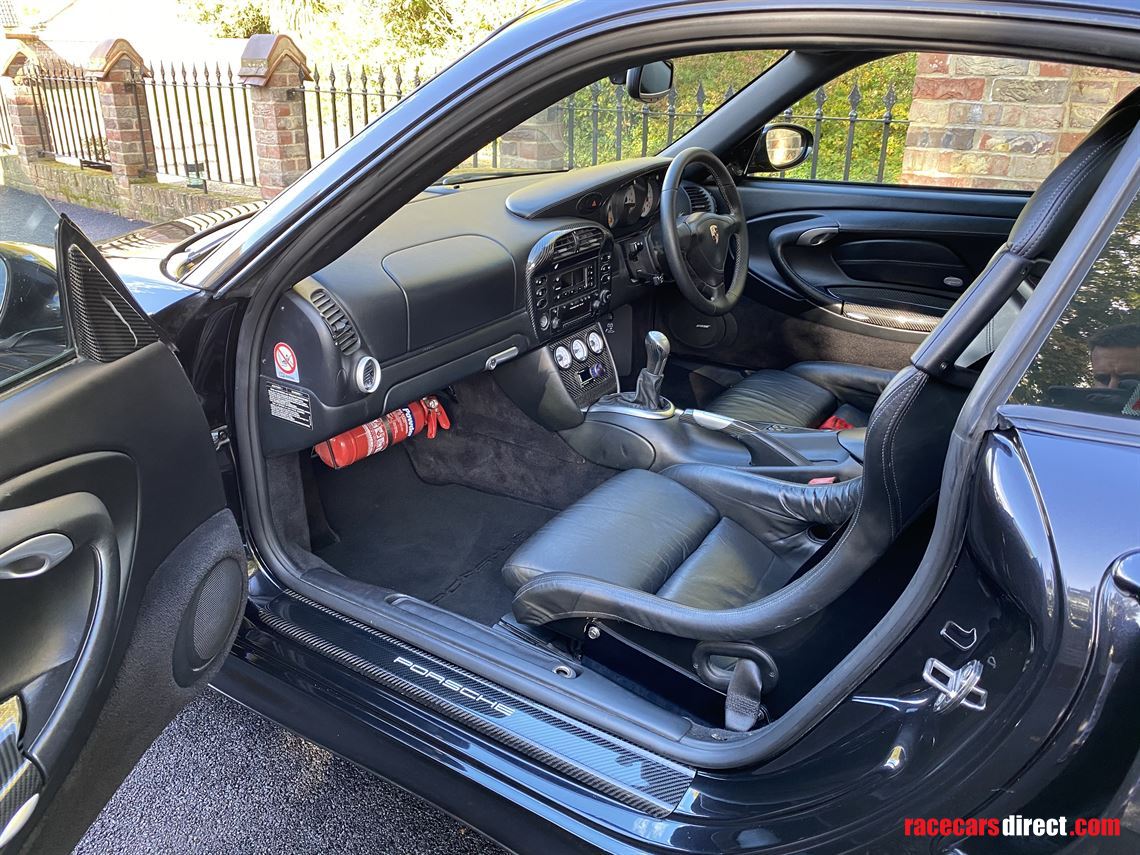 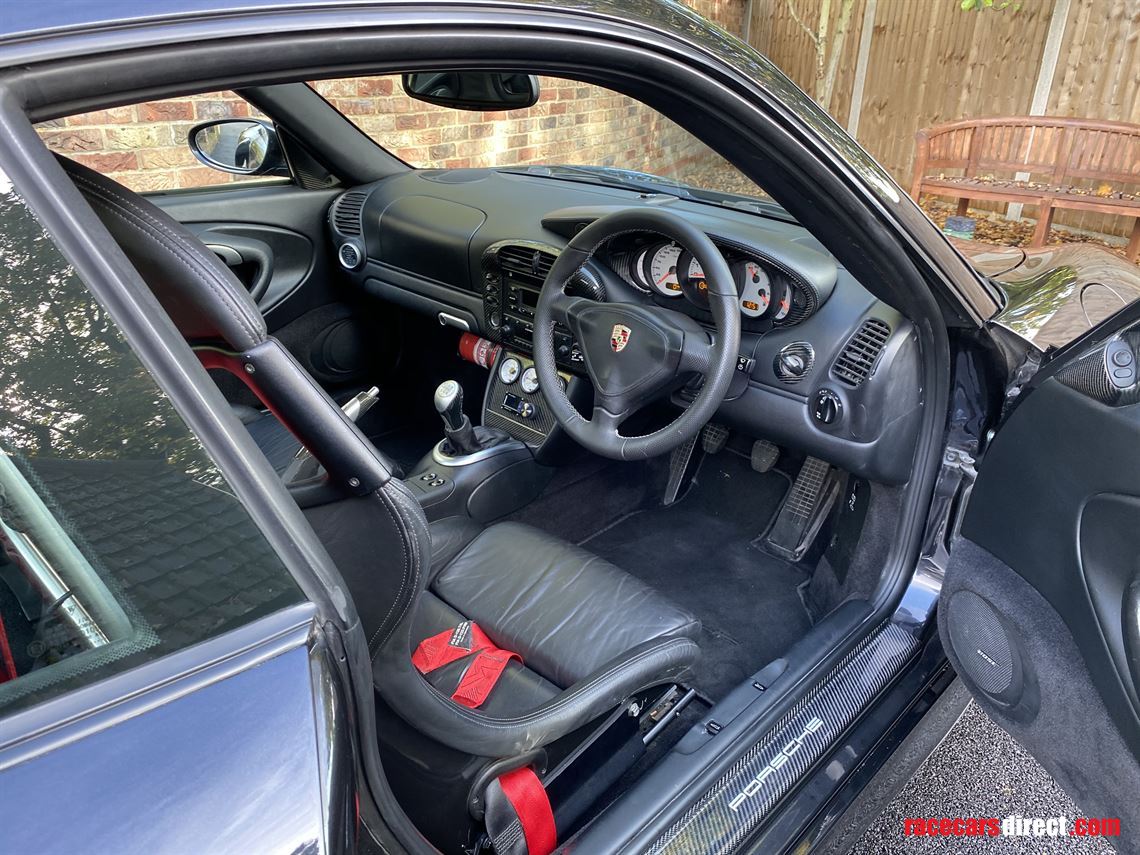 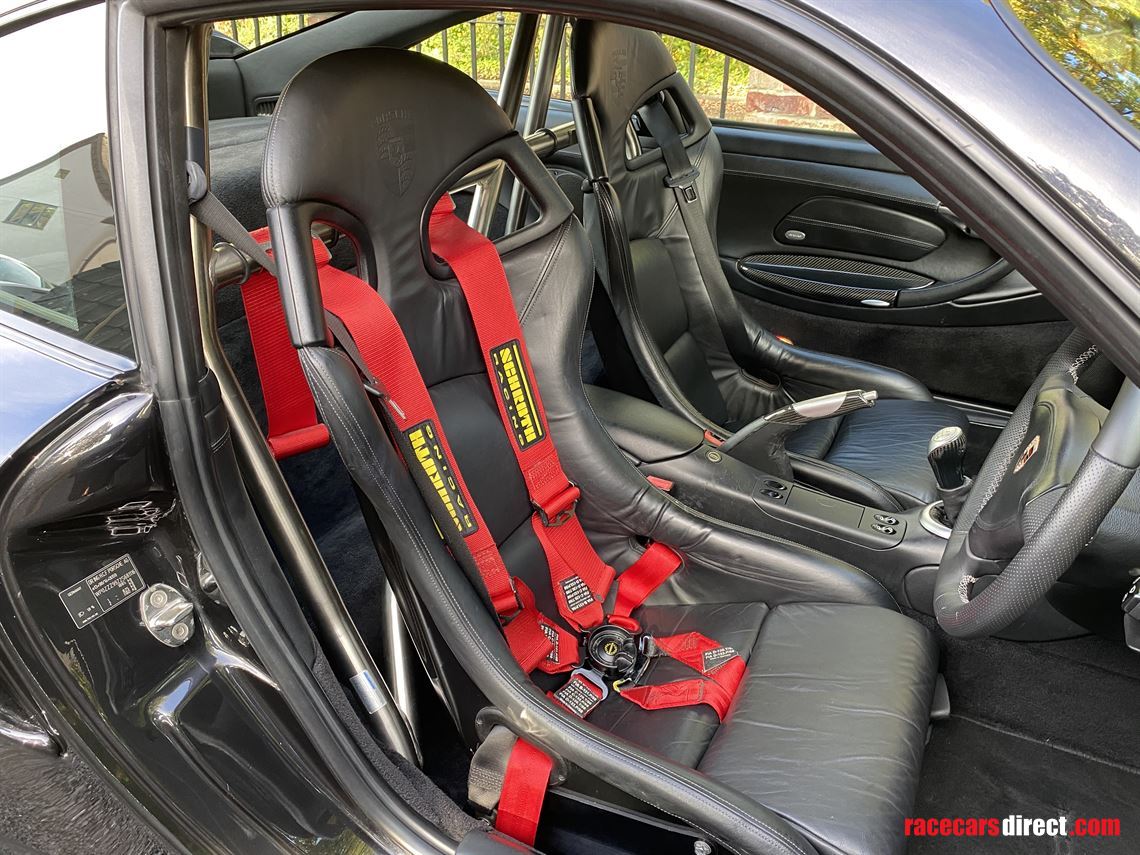 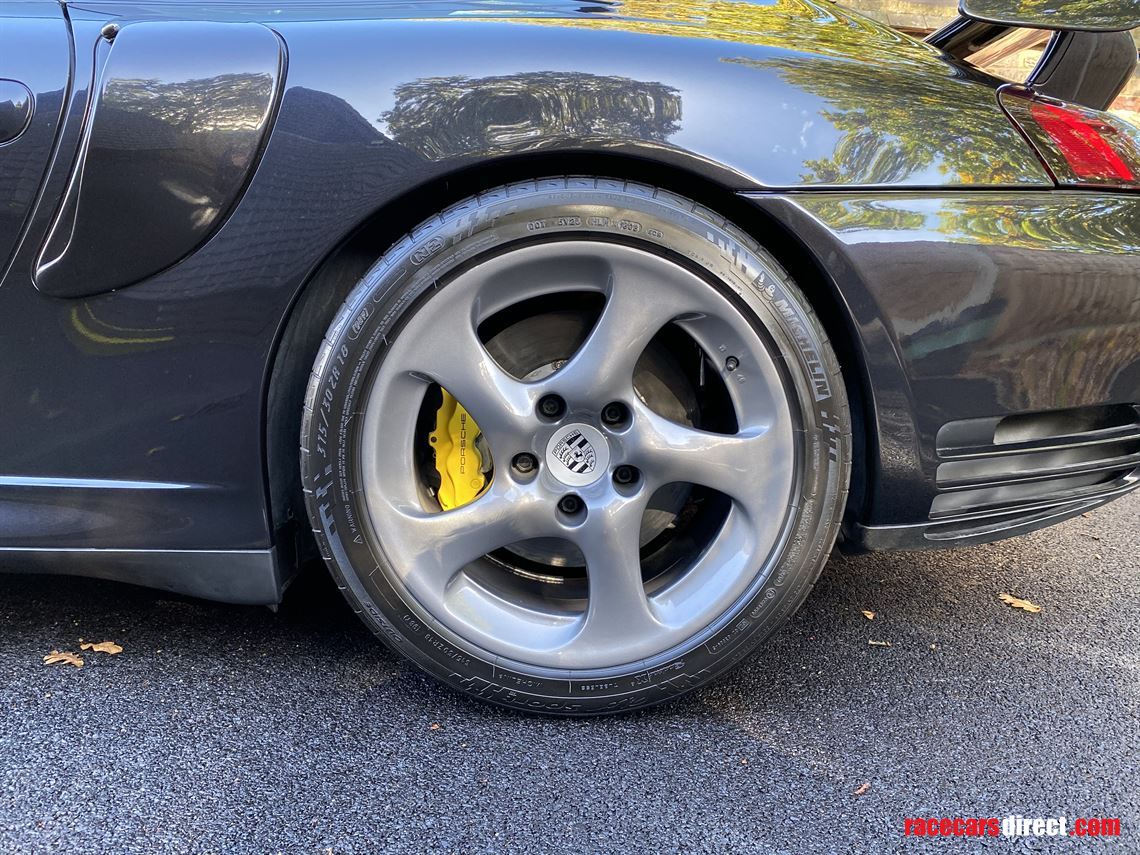 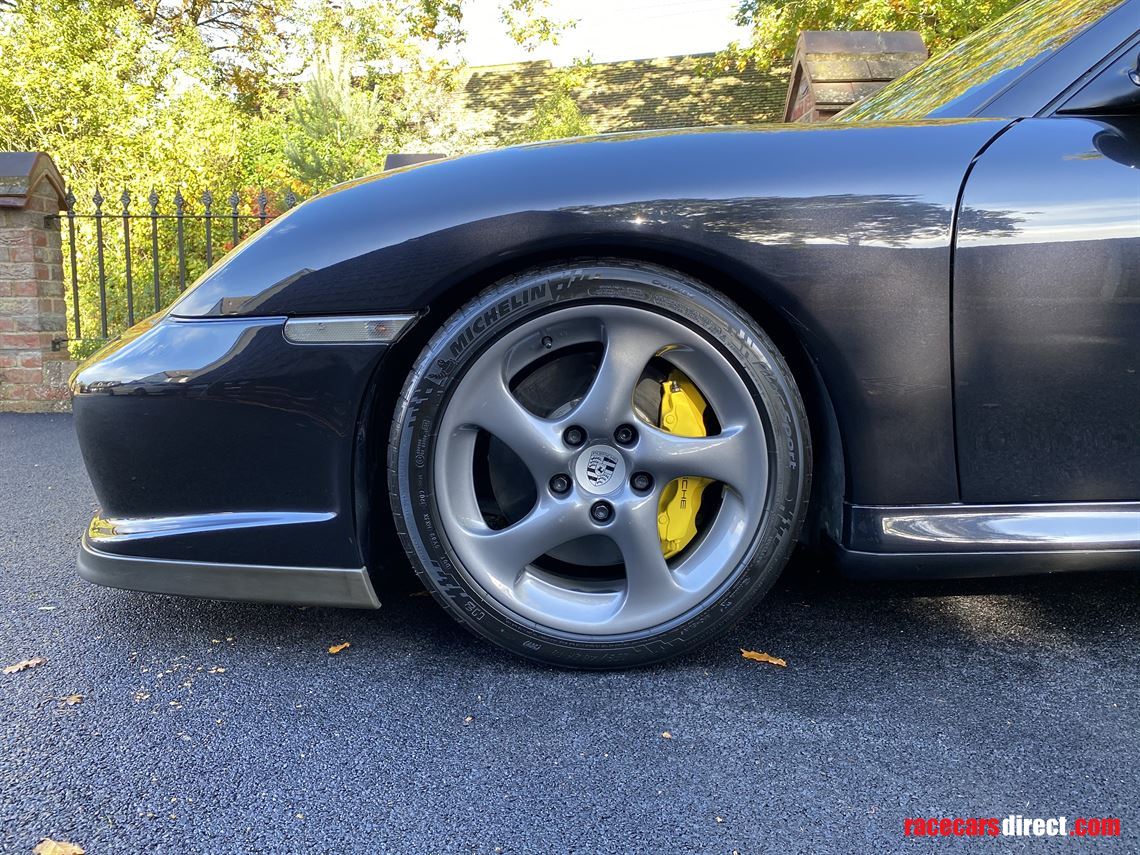 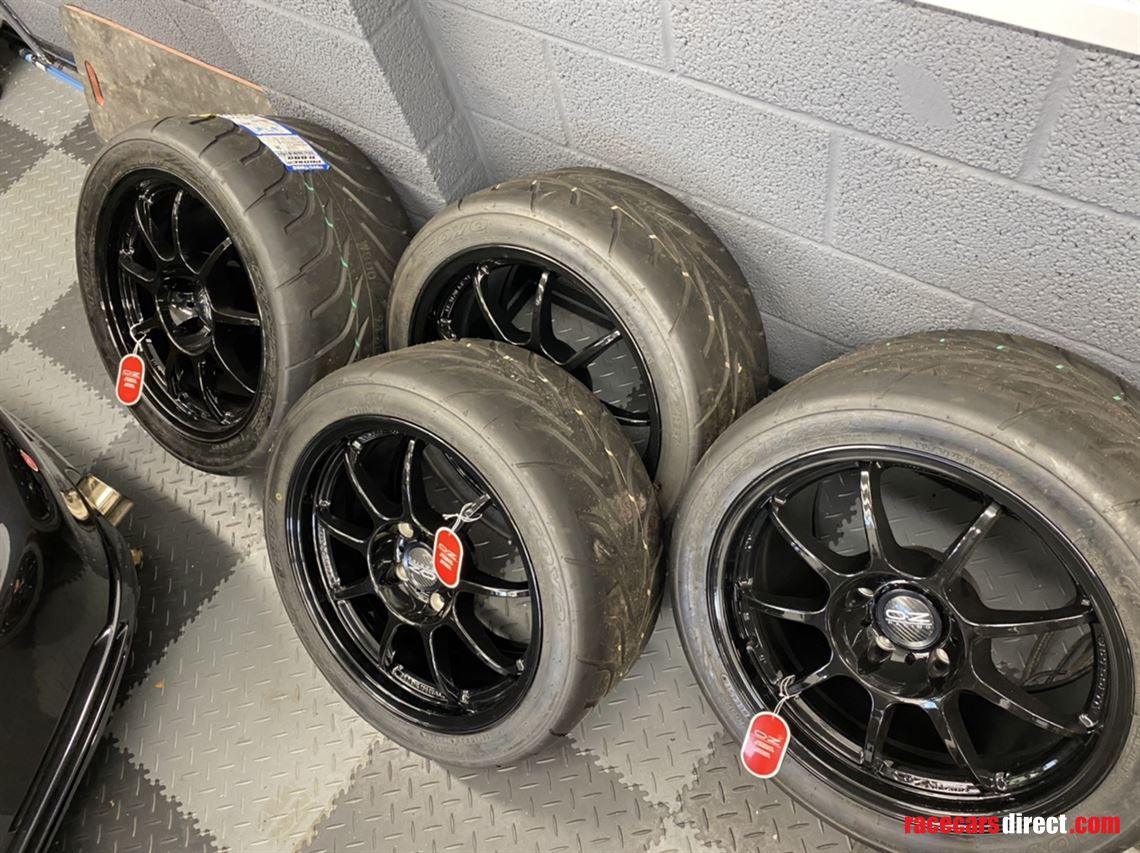 The car is a December 2001 UK registered production car, 51 registration, black, 6 speed manual, 996 Turbo with just 64k miles with full-service history and just 2 prior owners. I purchased the car in 2014 and over a period of 5-6 years have extensively restored and modified the car and turned it into one of the fastest 911’s on the market with no expense spared.

The car cosmetically is in mint condition. It has had a full back to metal body respray in original Porsche black. The car is currently sitting on Porsche turbo twist wheels with Michelin ps2 tyres with good tread but also included in the sale is a set of brand new lightweight OZ Alleggerita alloy wheels and brand new toyo r888 tyres for race/track use.

The car has a genuine GT2 front bumper, a genuine GT2 rear wing, genuine GT2 leather Recaro bucket racing seats and a genuine GT2 roll cage and GT2 drivers racing harness. Recently also had a brand new genuine windscreen as the existing one had 2 large stone chips in drivers view from track use. Cosmetically it is immaculate.

Mechanically the car has been stripped and rebuilt in stages over the 5-6 years I have owned it. I have listed all of the work carried out to the car both in terms of maintenance, modifications, and cosmetics. The car was slightly modified when I purchased it.

From the engine rebuild, to the drivetrain, to the suspension and the brakes it has all been overhauled. The car is currently not used on the road and is only used on track and speed events at present, but the car could easily be modified for road use with a new exhaust which has catalytic converters as the current exhaust is just two 4” straight pipes from the turbo outlets which offers the best least restrictive output in terms of power and efficiency.

The car runs of a hallman pro manual boost controller which I prefer to use, but also has a greddy electronic boost controller. You can choose between which power output you wish to run. The car can run from 0.8 bar which is around 600bhp, anywhere up to 2 bar. At 1.3 bar the car is producing around 900bhp, whereas at 1.5 bar its producing around 1200bhp. The car is fully capable of more if needed.

Engine-wise the prior owner had the engine rebuilt at Parr Porsche Specialists. The original engine had internal damage due to the power it was running, so he had it fully rebuilt with forged pistons, carillo rods, engine was sleeved, with upgraded bearings, head bolts, valves and so on. The heads were also ported and polished. This rebuild was an FVD kit which also increased engine capacity from 3.6 to 3.8 and is more than capable of holding big power.

The car is running GT 3076r turbos modified by Owen Developments and are capable of running up to 2bar. Although the car is plenty fast enough between the 1.1 and 1.5 bar range. The car has 4.5” thick race intercoolers which are perfect for keeping the inlet cool, and to top it off the car also has Aquamists water/methanol injection. See modifications overstock for full spec on the engine.

The drivetrain, I found it hard to find a clutch which could handle the power. Tried several stage 2 and 3 clutches but nothing held. Eventually, I went with ERP’s triple carbon clutch and flywheel which has just been fantastic. It was well worth the investment. The pedal feel is slightly harder and aggressive than stock, but very engaging. The car is RWD vs AWD, so is running same drivetrain as the 996 GT2. The AWD system just didn’t work very well due to the poor viscous coupling for the front drive so was done away with, it also reduced weight by a significant portion. The rear end has an OS Giken 28 plate LSD and uprated DSS high horsepower axles, as stock axles are known to snap or distort at high power.

Suspension wise the car had when I purchased it Bilstein pss9 coilovers, although these are good they were used and I decided to renew the whole suspension. I started with KW3 Clubsport coilovers, and then did a full arm and bush and bolt restoration of the suspension. Everything down to the wheel bearings, every bush and every bolt and component was refreshed. All bushes used were Powerflex black series with the subframe using elephant racing solid subframe mounts.

Brakes, the car has 6 piston Brembo front and 4 piston rear with surface transforms ceramics on front and rear. These are made by surface transforms and are solid units, sold due to the stock Porsche PCCB discs delaminating. The calipers have had a recent full rebuild with new pistons, seals, dust cap, valves and so on along with all new brake lines, unions and fluid.

The car has had many other areas rebuilt for example the cooling system, 3 new radiators, new fluid and new water pump, thermostat and pump housing. The fuel system has also been rebuilt from the ground up, eventually went from one in tank pump, to two intank pumps then 3 and then went with 2 external bosch 044 racing fuel pumps mounted to feed directly from the lower portion of the fuel tanks to prevent fuel surge and starvation. It has 100 screen micron filters inside the tank inlets, and then 10 micron further up before the fuel rail. The car is run on vpower 99 ron, but could be upgraded to e85 or race fuel but I have never gone down that route.

The engine was tuned by Protomotive in the USA. It was done over a few days via live datalogging and adjustments. The tune is mafless so it takes in to account several variables such as boost, and map sensor etc to adjust the fuelling.

Maintenance wise, I and the previous owner always changed the oil every 3,000 with mobil1 5w50, gearbox and axle fluids were changed every 10k-15k miles, and plugs every 20k with filters 10k and so on.

The car over-stock has had the best part of £80K-£100k spent on it to date. I have hundreds of photos of the work and build on the car to date i can send.

I have had the car on track several; times and it is fantastic. I ran the car at a previous terminal velocity high speed event and did a total of 20 runs all between 205mph and 207mph, it ran flawlessly every time. Since then I have carried out modifications to the fuel system and so on, so the car is capable of doing 220mph-230mph with the right driver and fuel. Ideally, this would make a fantastic track/race or speed event car, a show or promotion car, or even a very fast road car with a few slight modifications.

The car is sold without an MOT and is not for road use in the UK. If you want to use it on the road you will need to change the exhaust to something quieter and less emitting. I never built it for the road I always built it for race/track and for off-road speed events. I did not want to deviate or sacrifice any performance. Two 4” exhaust outlets from the turbo is the best least restrictive option available and are also very light.

The car is located in my garage in Suffolk, I can carry out viewings via phone or in person.

( Mounted directly on the intercoolers )

Ready to Race. Fully built to latest RML specification and can compete in the BTCC until end of 2023