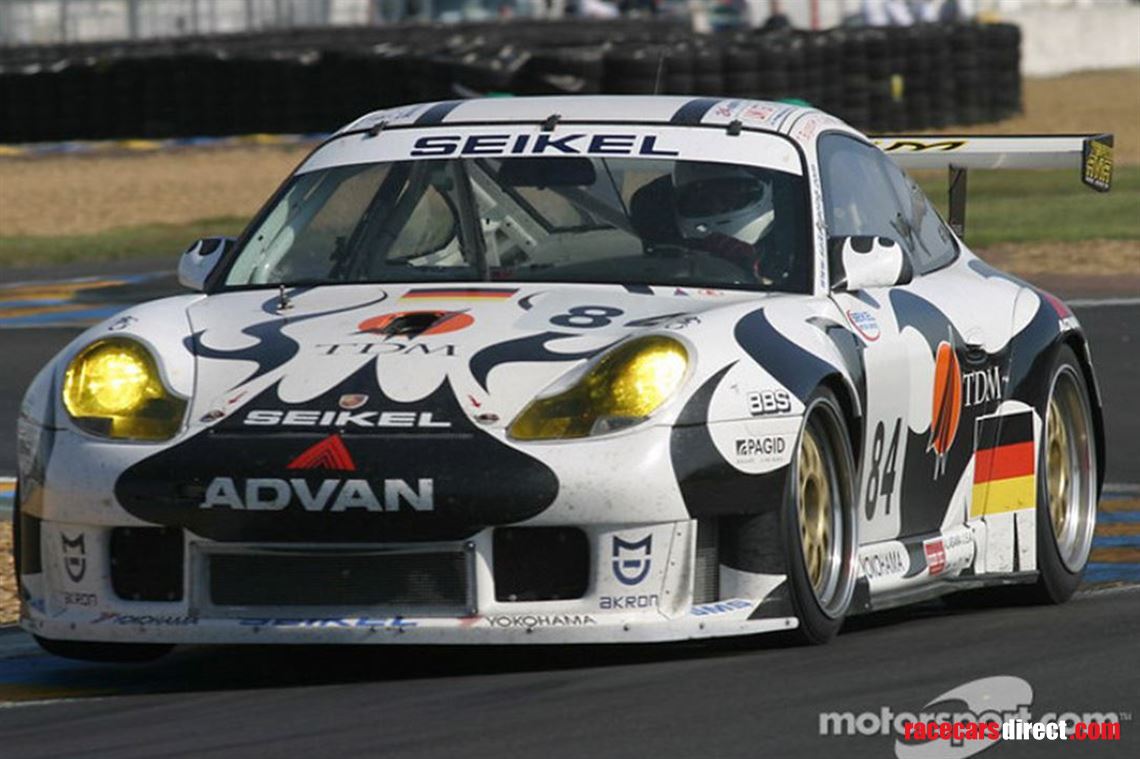 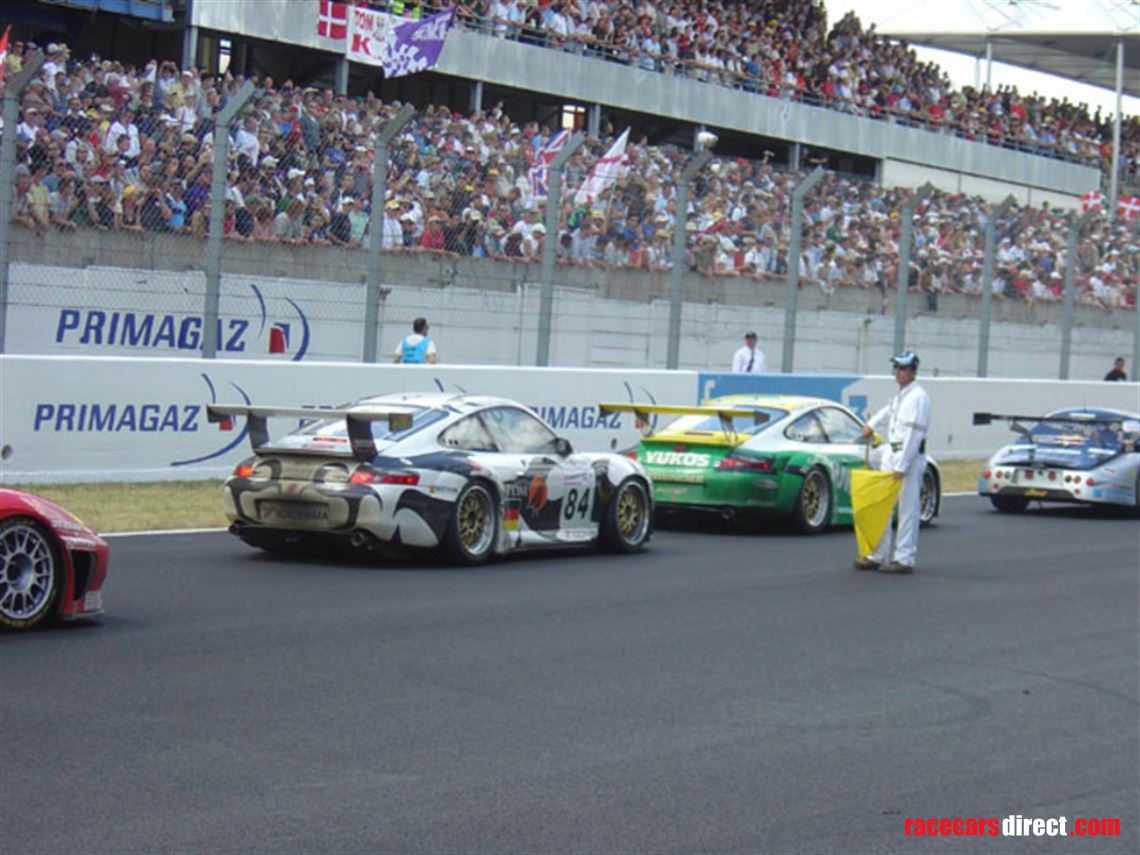 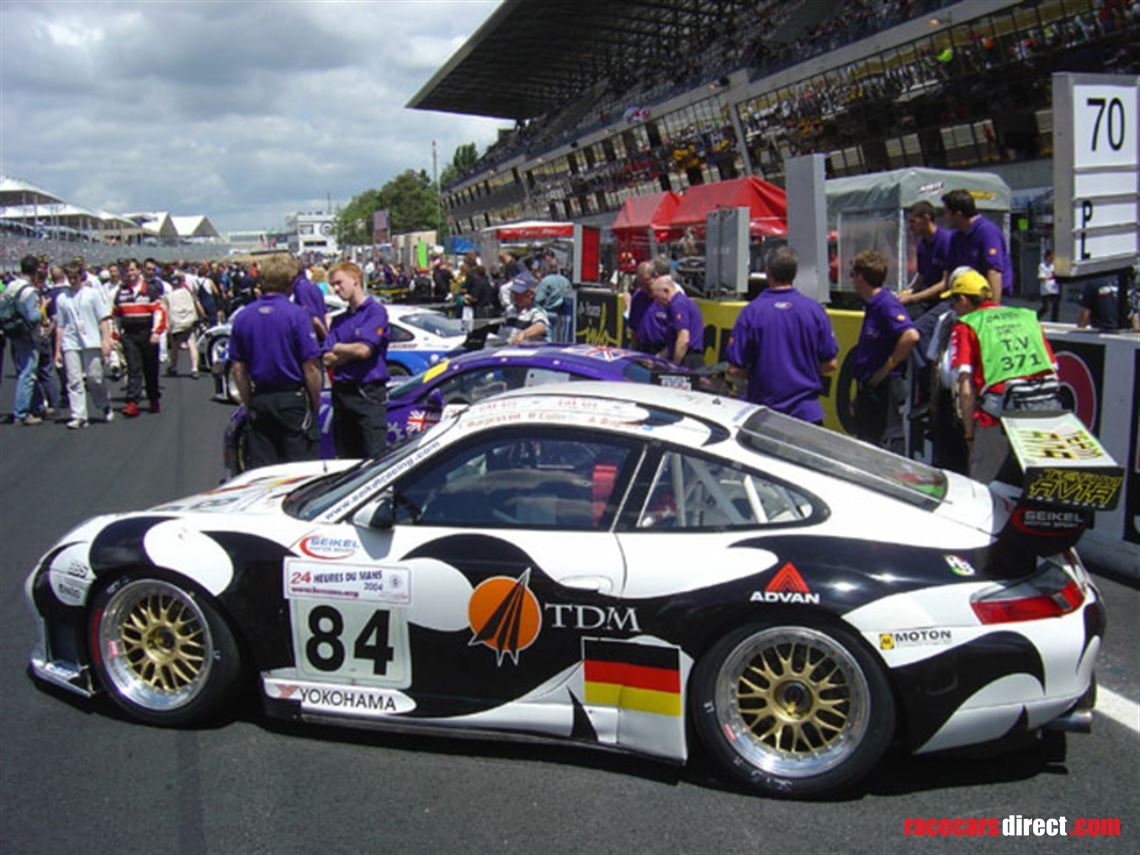 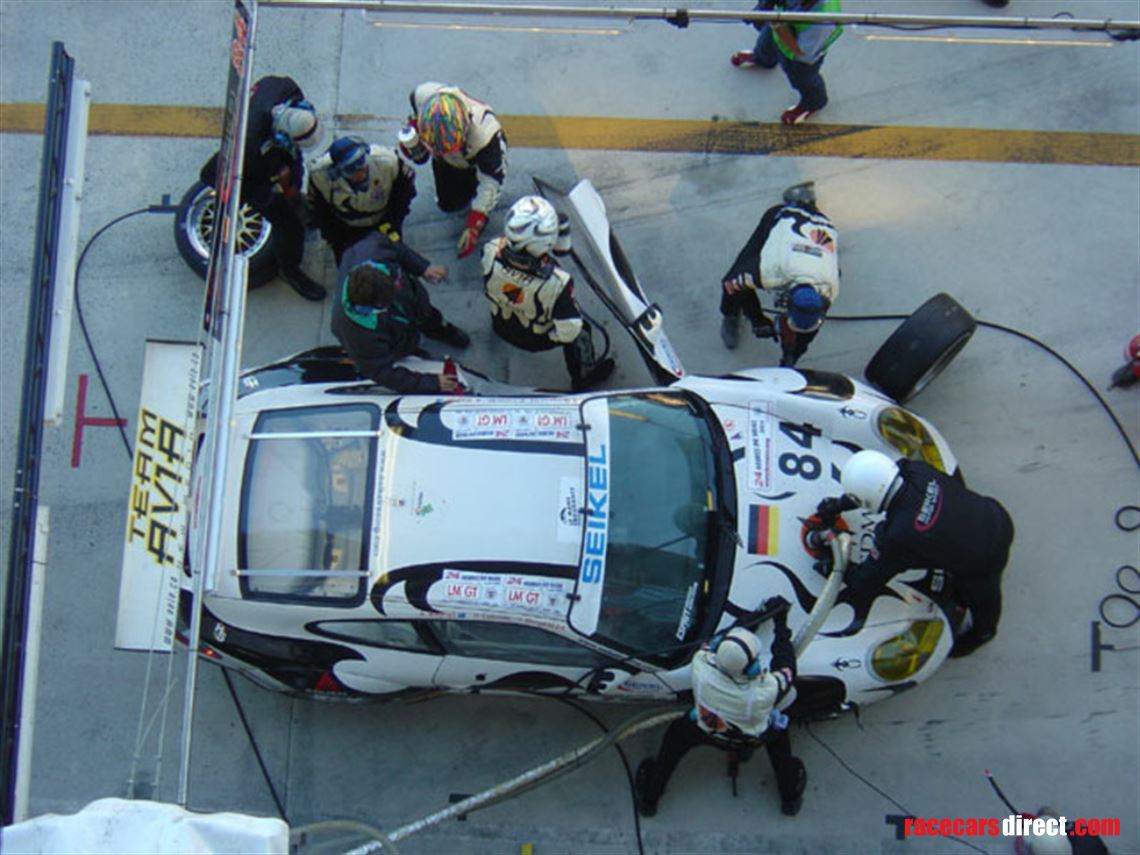 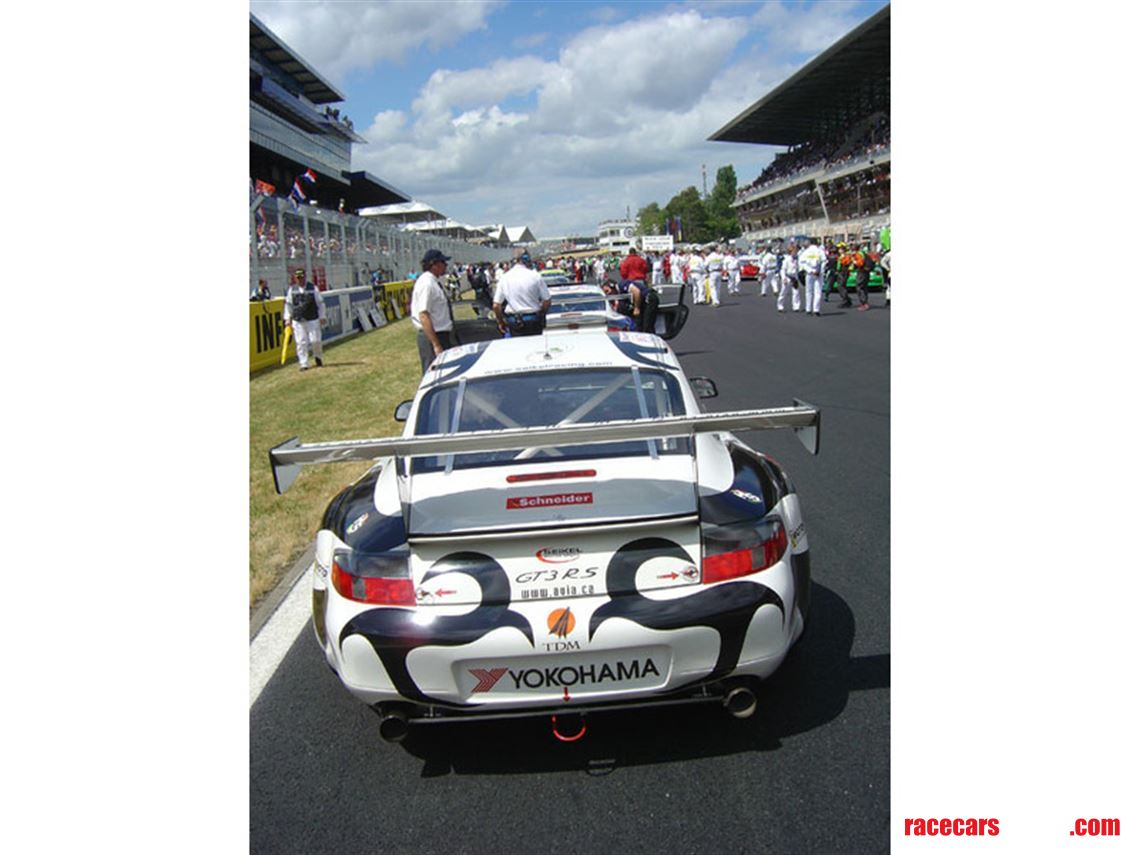 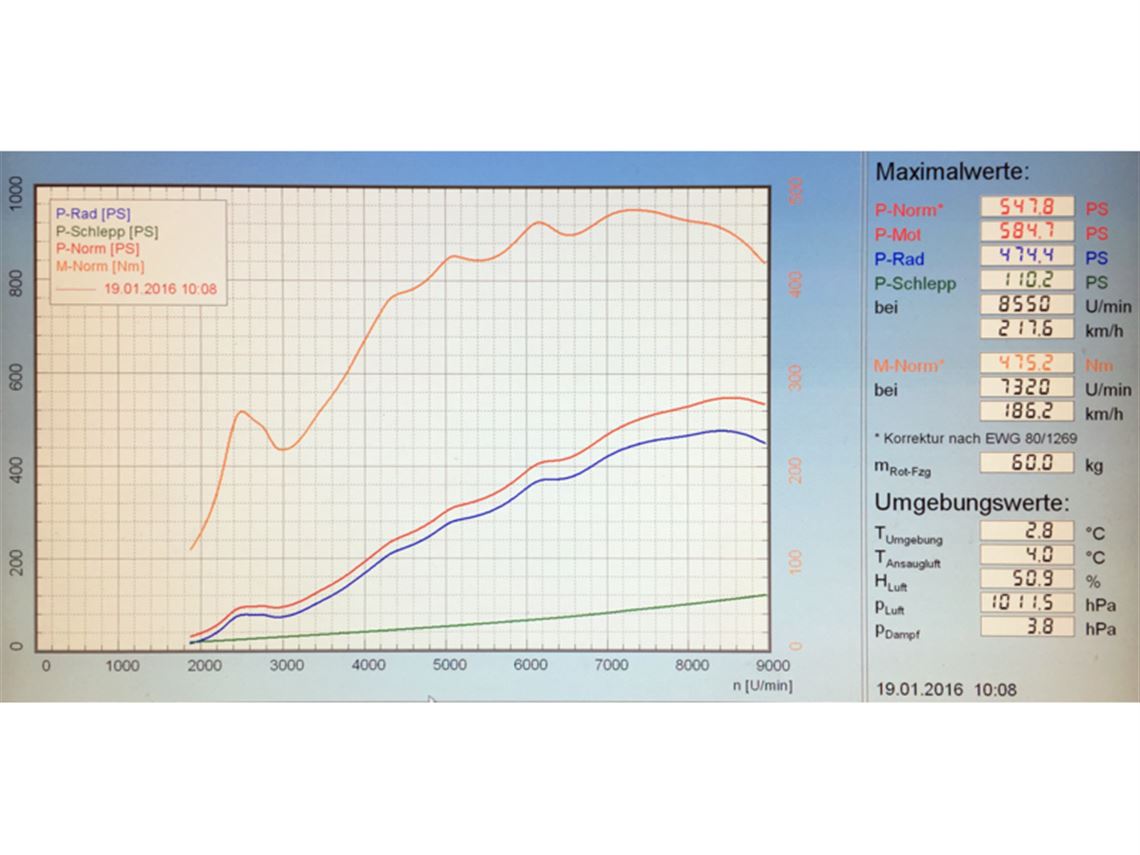 Somewhat confusing, the model name contains "GT3" whereas these cars were competing in the GT2 class. Designed strictly for competition on the world's most important racing circuits, the Porsche 996 GT3 R-RS-RSR lineage represented Porsche Motorsport’s pinnacle racing GT during the 1999 - 2006 period.

This car was born as a 2001 996 GT3 RS and delivered to the Seikel Motorsport team where it was immediately put to World Championship duties with excellent results including a 12th overall at the Le Mans 24hr race. With the help of Porsche Motorsport, Seikel continued to update and run the car in 2002, 2003 and 2004 whereby the Le Mans 24hr was always part of its racing program. During those years, results continued to be excellent with a 4th in class at Le Mans and at Daytona 24hr. In 2005, the car was sold to Belgium where it continued to run in the Belcar Championship up to 2008. The car’s full race results can be seen in the downloadable "race history"-file.

The current owner bought the car in 2011 and – still in its green Belcar livery - ran it in the German PCHC series. In 2015 he commissioned Kurt Ecke of RDM Racing to restore the car and bring it back to its 2004 Le Mans 24hr specification where it ran in full RSR spec except for its RS front. This restoration was done with no-expense-spared and included the complete underbody and RSR front such that it now is to full 2004 RSR spec. A new engine was built up with all new RSR parts to correct 3.8 liter specification delivering 555 bhp and was paired with a new period-correct sequential gearbox. It is important to note that all the original body panels and other parts of the car were kept with the car, including its 3.6 liter engine (rebuilt and mapped with 0 hours), its original H-pattern gearbox and the complete original 996RS Stack system and electric wiring harness.

When its restoration was finished at the end of 2016, the car has been used sparingly in two track test days and has collected less than 10 hours run-time. #1S692079 is sold in race ready condition with its fuel cell, seat, belts and fire system all current.

Spares include a complete set of BBS wheels and several sets of ATS wheels together with miscellaneous running spares.

This is a rare opportunity to acquire an iconic and well prepared example of the latest evolution of Porsche's most successful GT racer which is eligible for Peter Auto's Global Endurance Legends and also for Masters Endurance Legends where it will be a welcome and front running GT2 class entry.