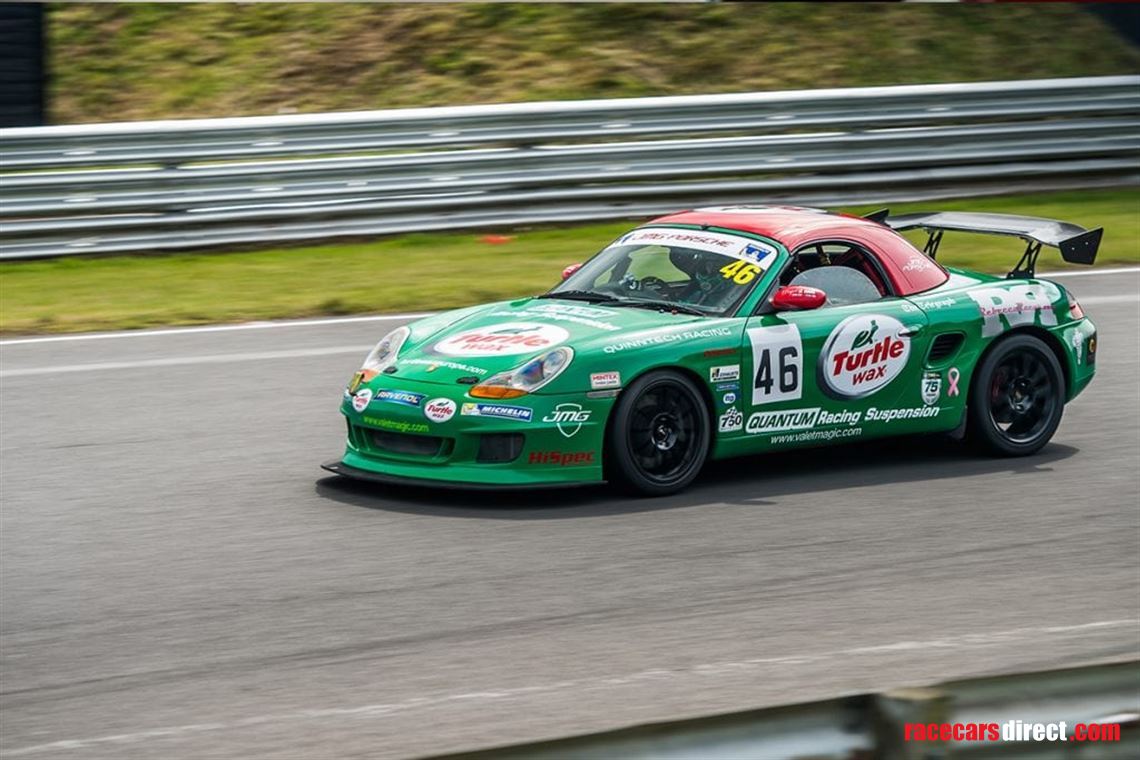 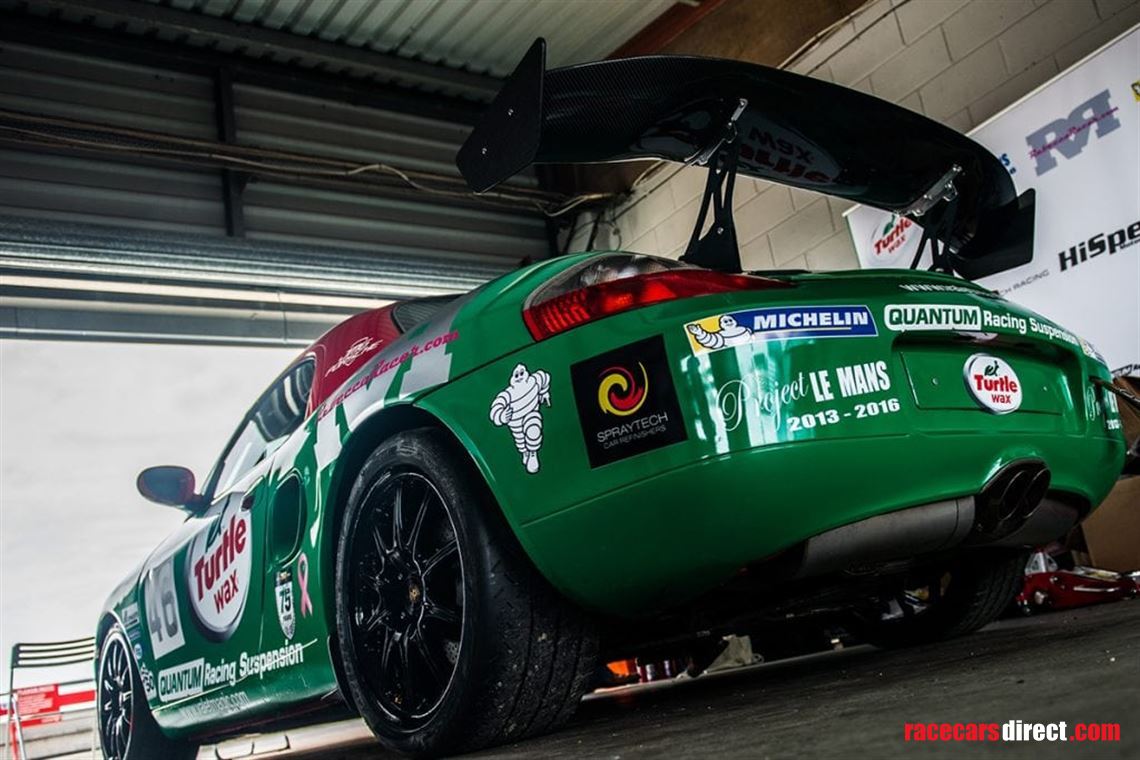 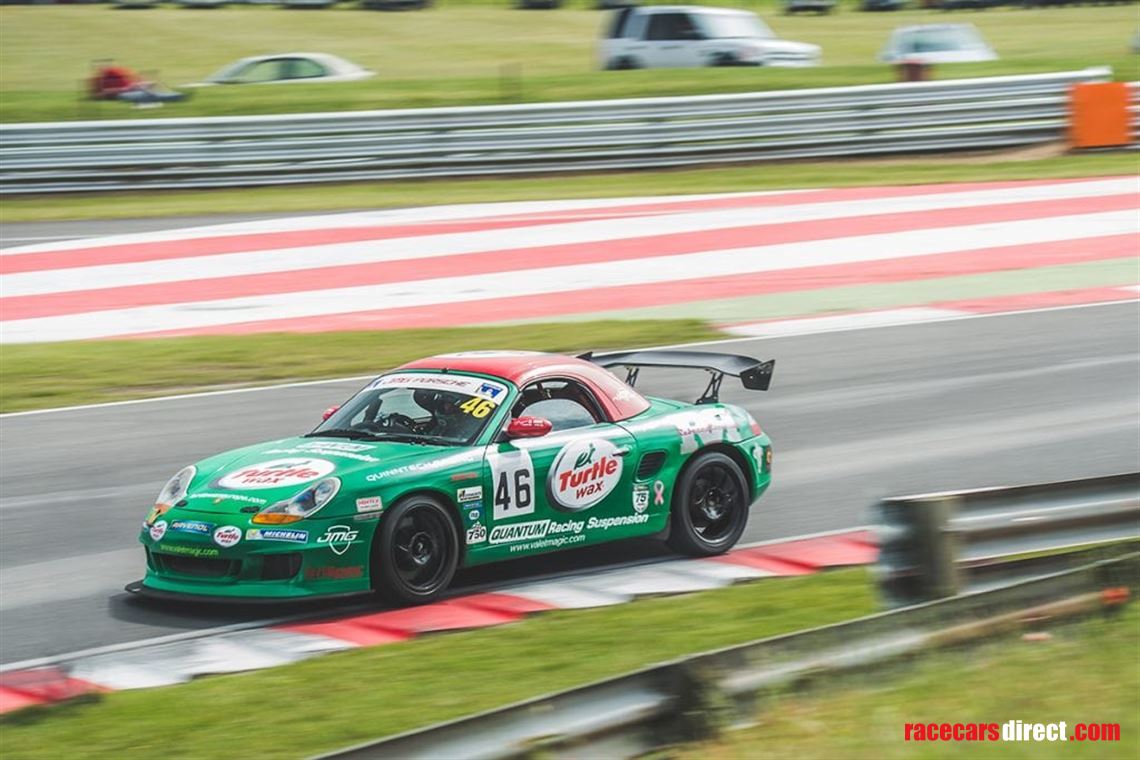 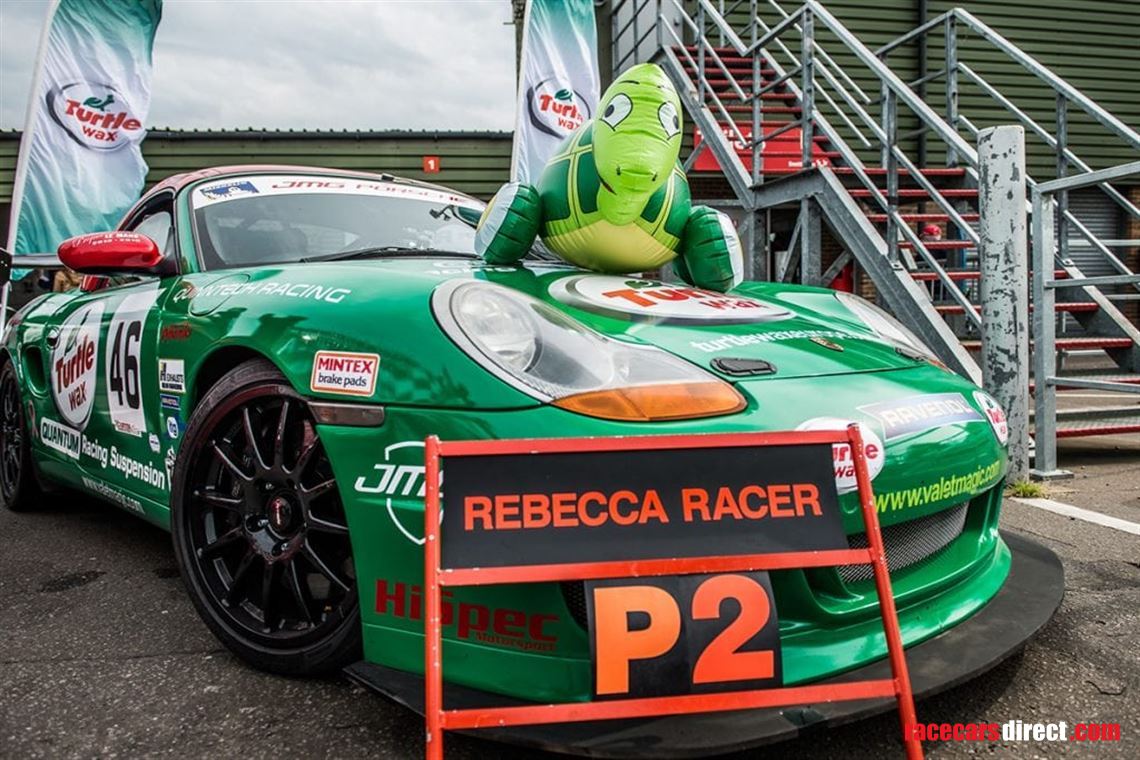 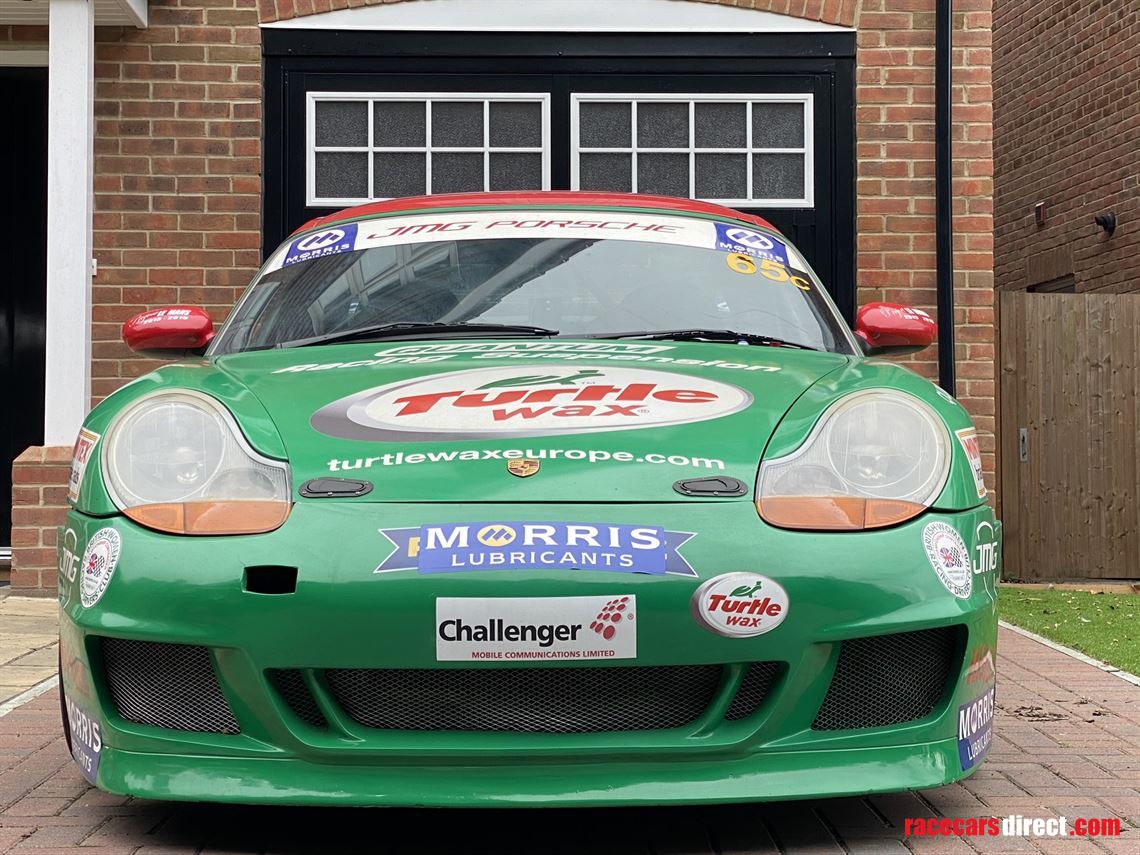 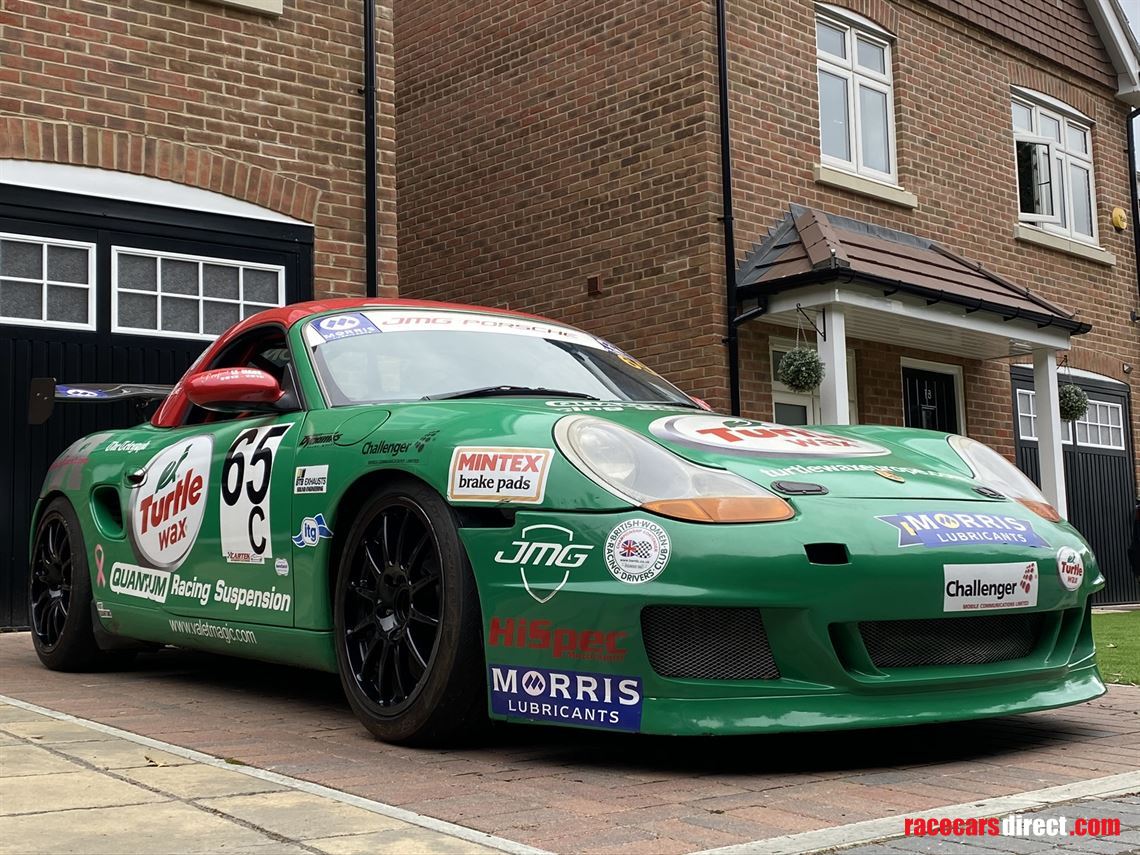 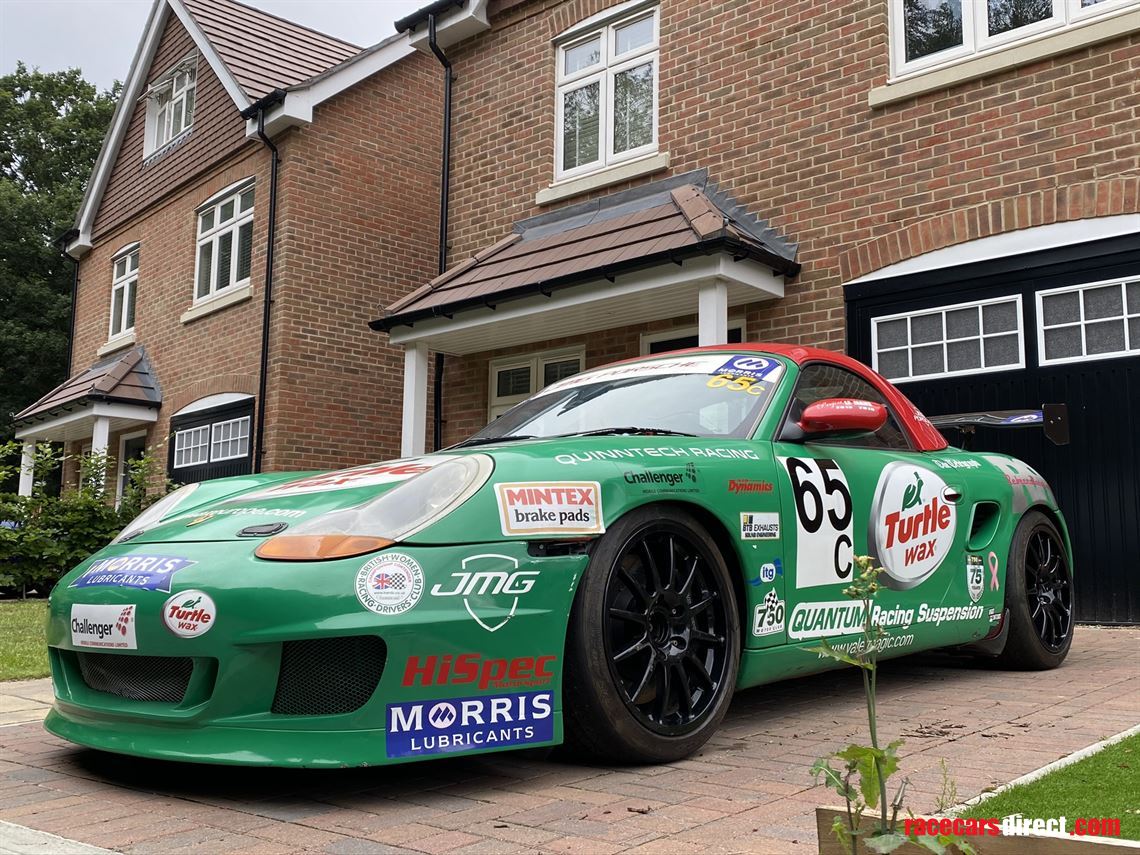 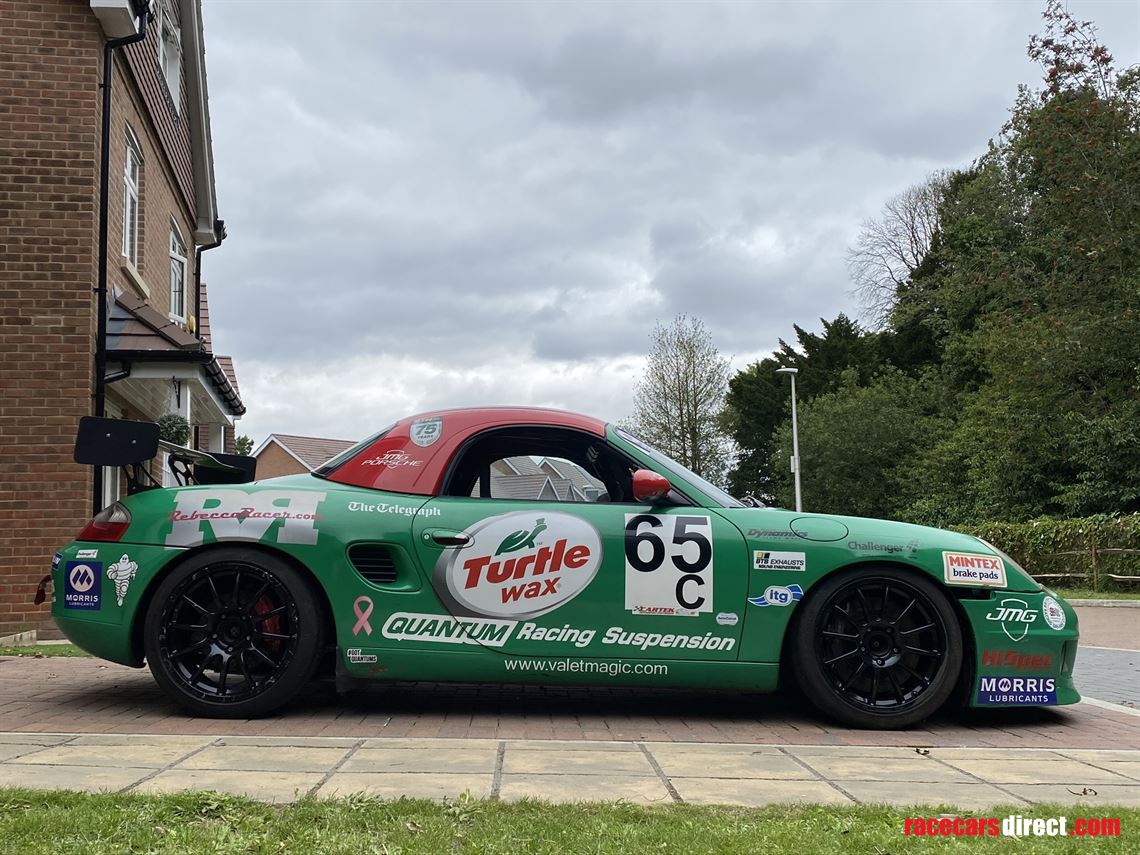 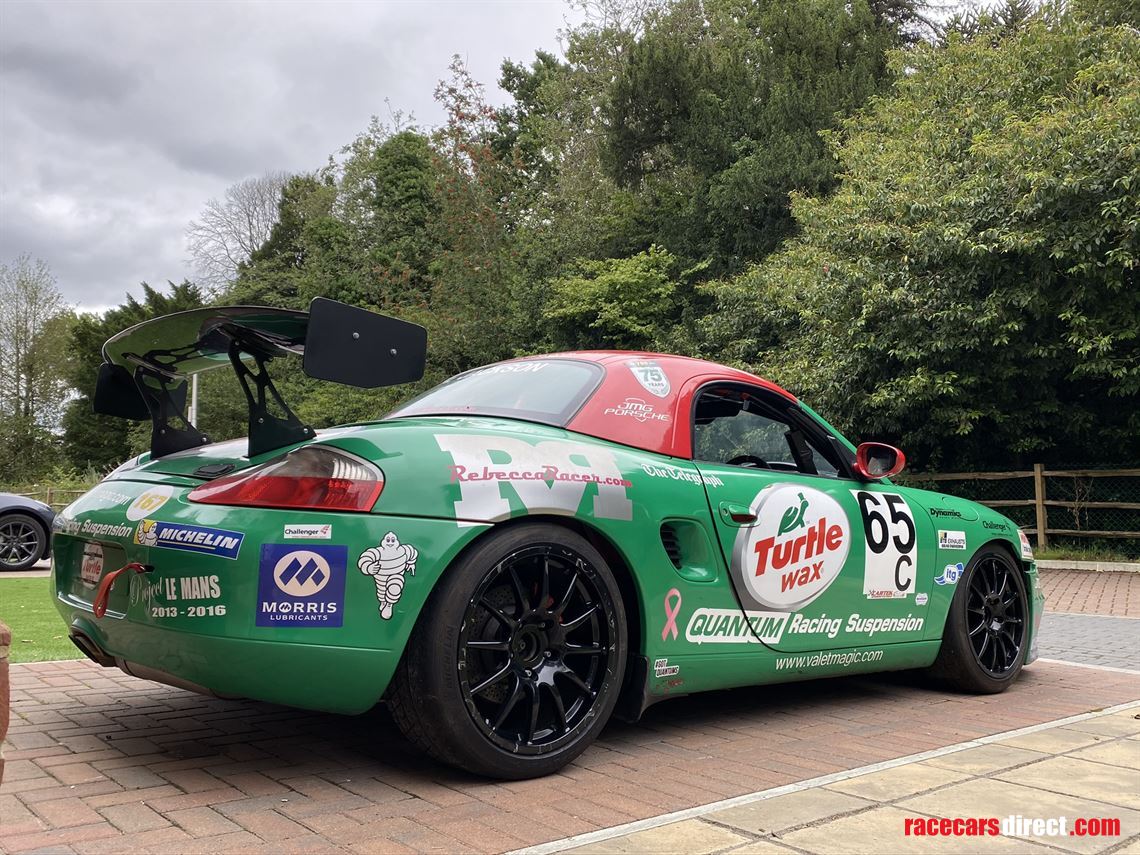 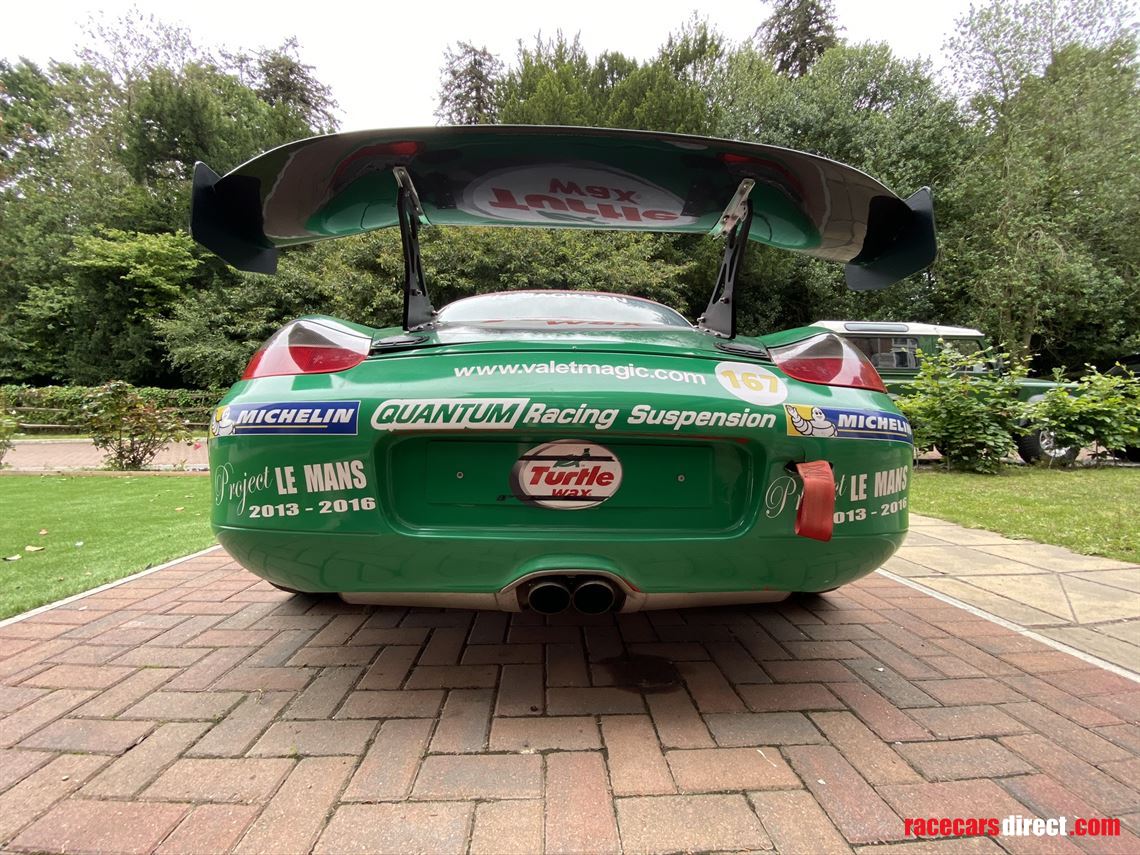 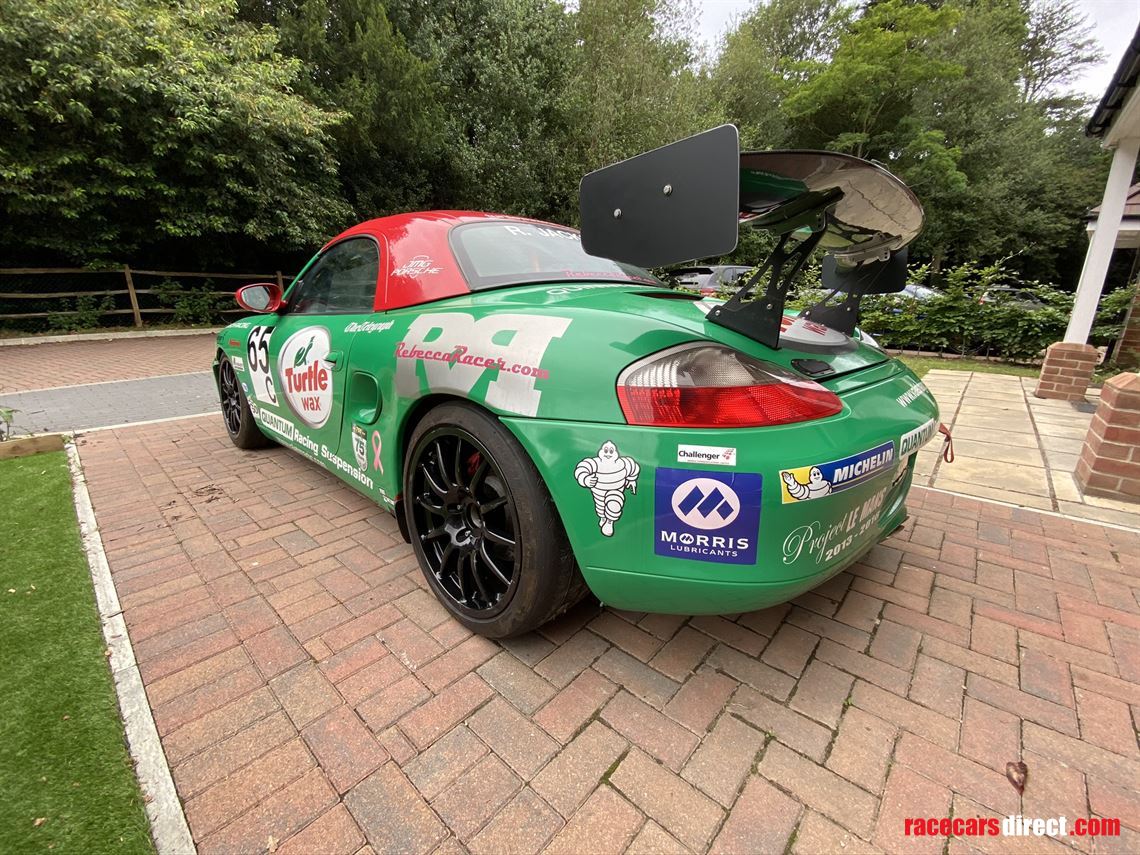 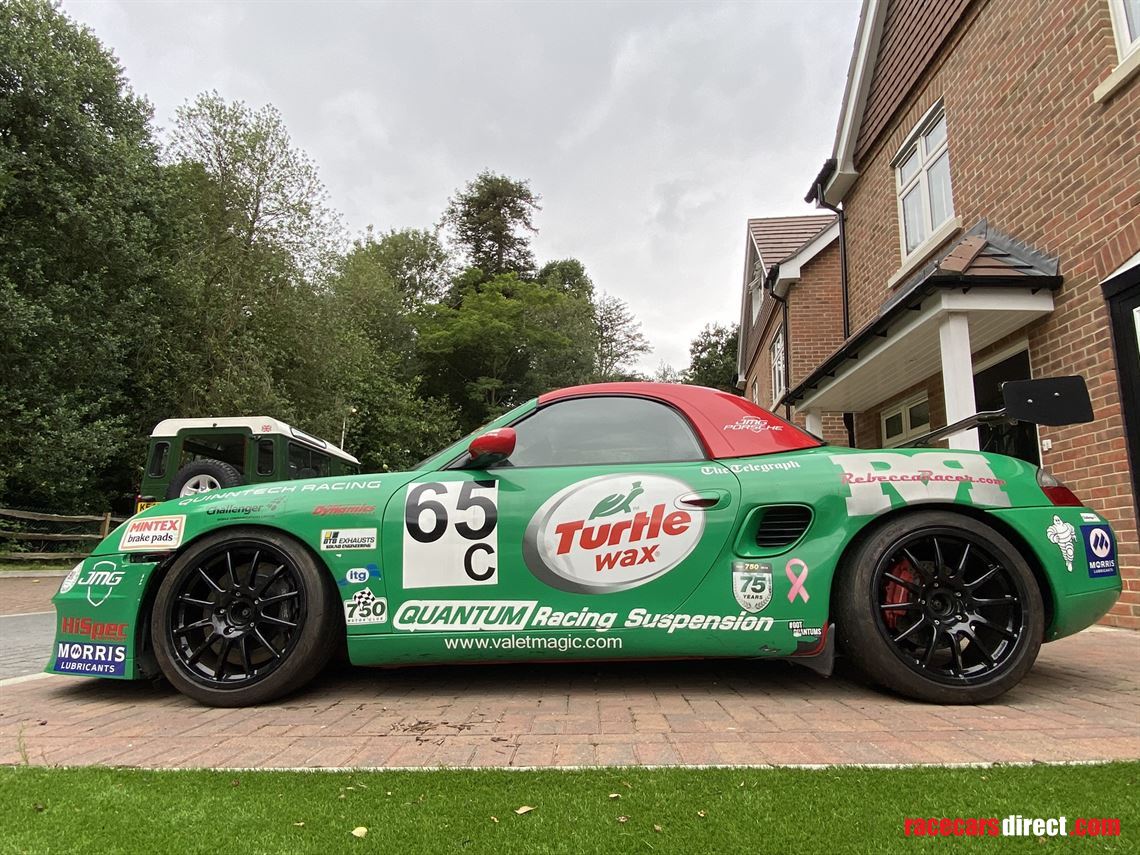 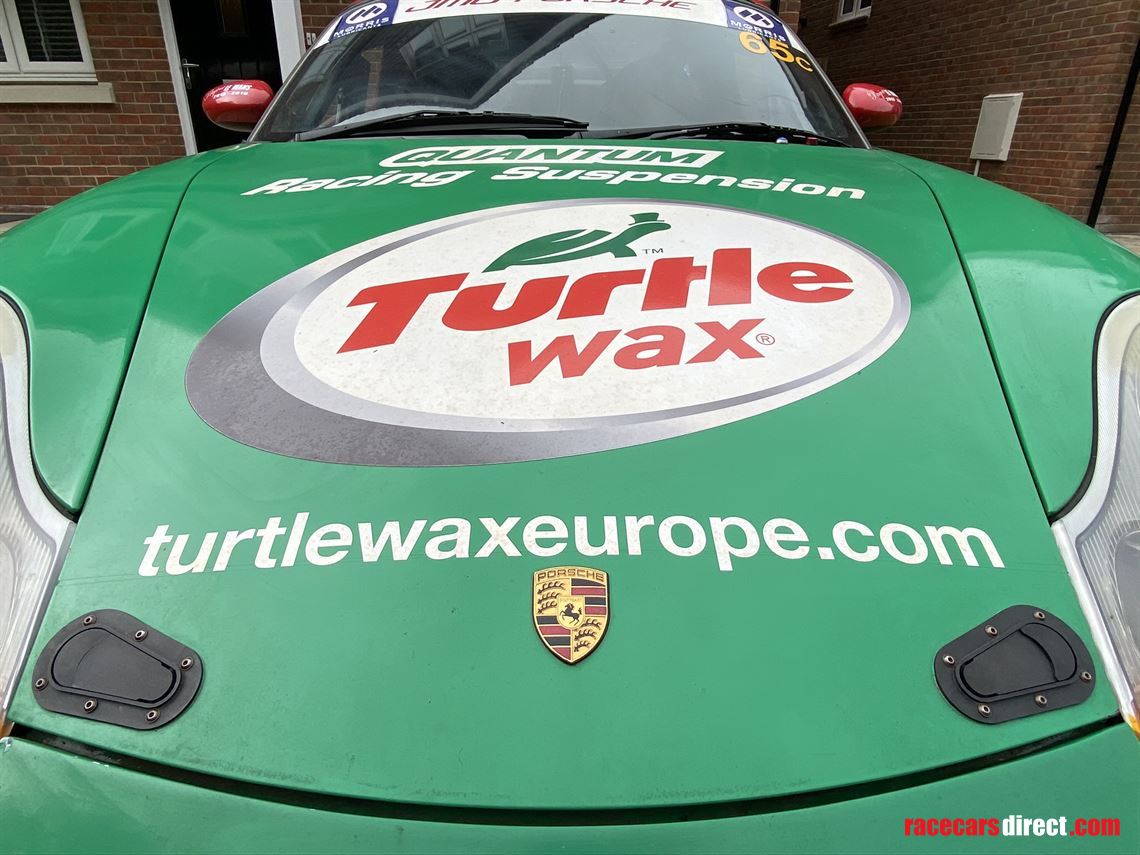 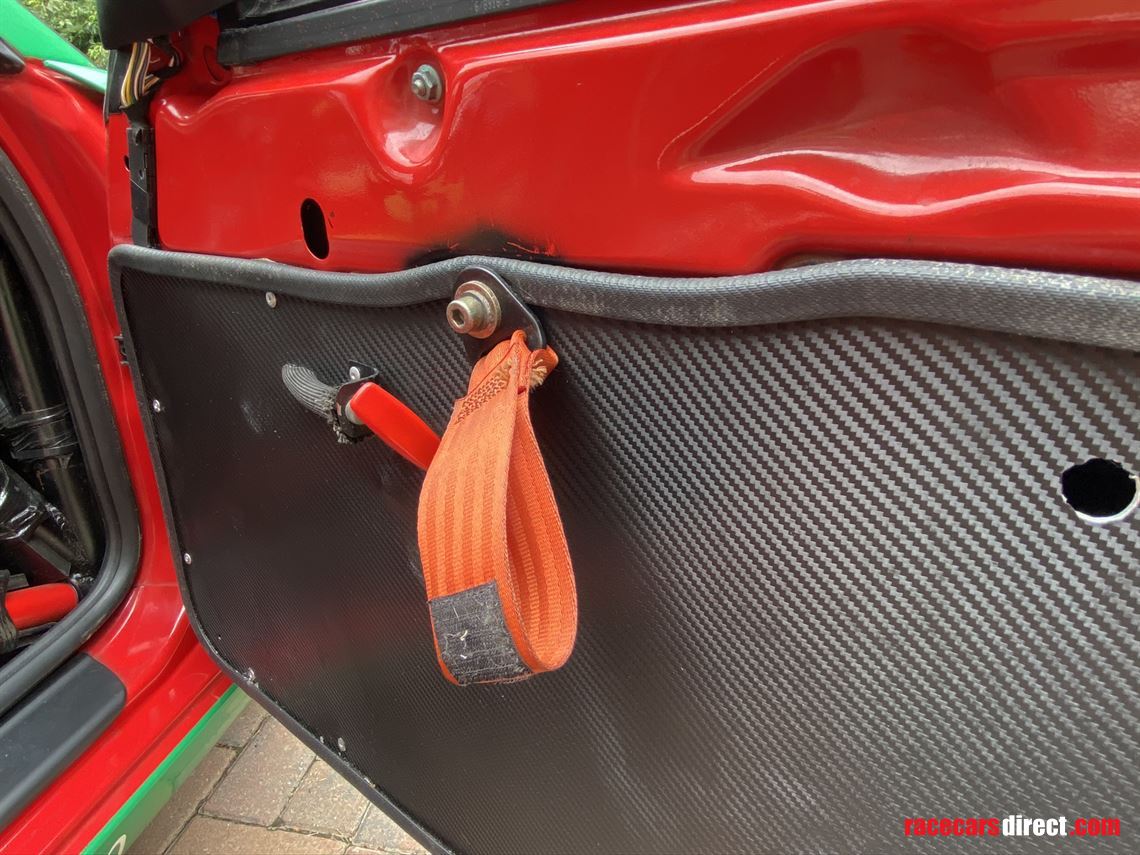 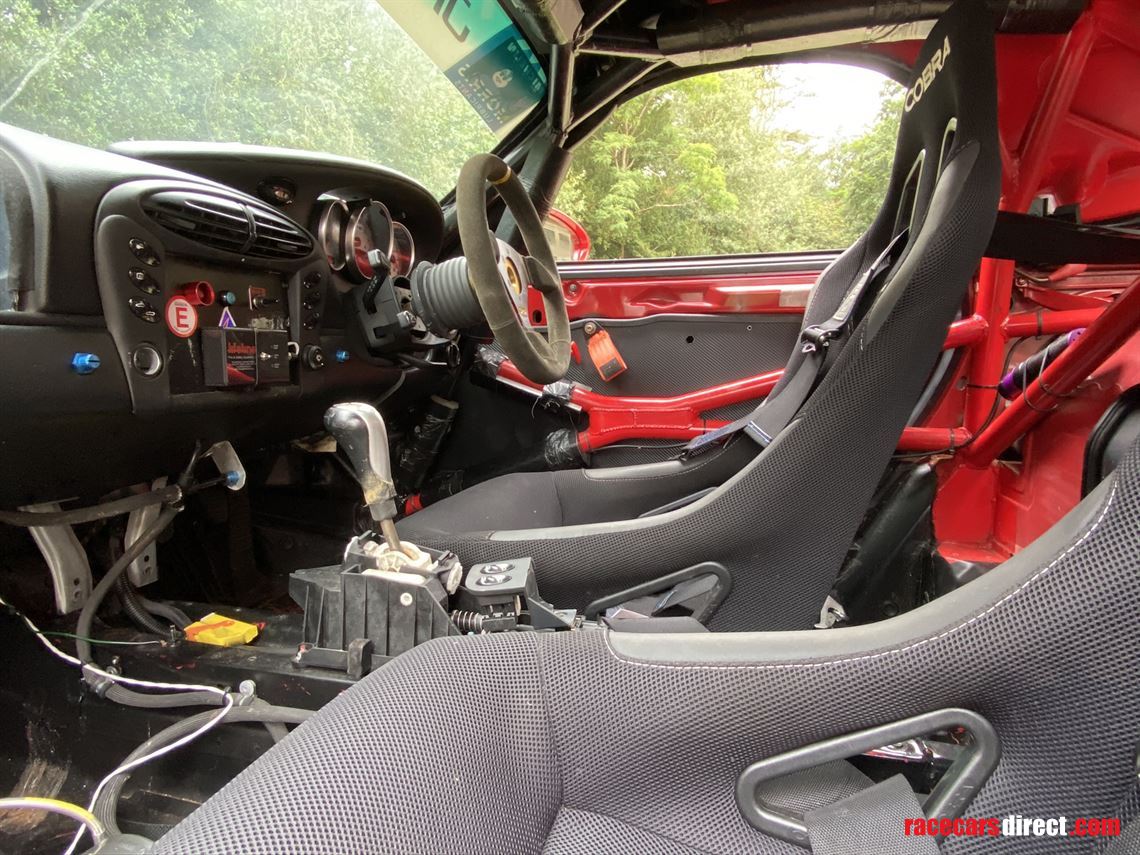 This 2001 Porsche Boxster S is a fully prepared and competition-proven racing car that benefits from a range of performance-enhancing modifications, and which is ready to take to the circuit. Its engine is the 3.2-litre naturally aspirated flat-six, coupled to a six-speed manual transmission. The odometer shows 101,000 miles from new, with the vast majority of that figure having been accrued on the road before being converted into a race car.

First registered in June 2001, this 986-generation Boxster S has five previous registered keepers, who evidently kept the car in great condition, with a comprehensive main dealer and specialist service history through to 2013.

It was subsequently purchased by racing driver, motoring journalist and TV presenter Rebecca Jackson in 2013, who gradually had it built into the competitive racing car it is today, at an estimated cost of £45,000 in combined parts and labour.

During her seven years of ownership, Jackson took the car to victory in the BRSCC Production Boxster Championship in 2013, and it went on to win its class in the Birkett 6 Hour Relay Race at Silverstone in 2015.

The car was also a stepping stone in ‘Project Le Mans’; Jackson’s four-year plan to compete in the Le Mans 24 Hour endurance race, which she achieved in 2016, promoting awareness for Breast Cancer Research and raising funds for Instituto Ayrton Senna.

As a result of its success, photos and descriptions of the car were included as part of an interview with Jackson in Johnny Tipler’s book ‘Porsche Boxster and Cayman: The Complete Story’, as well as featuring in The Telegraph, on ITV4 and in numerous other motor racing and general publications.

Originally finished in Guards Red, this Boxster now wears a green Turtle Wax racing livery, complete with numerous sponsorship decals and its racing numbers. Overall, the body panels and livery present very well, particularly for a car which has seen extensive use in competition, with Jackson herself describing it as “a very neat, straight, well-prepared race car”.

In line with its competition use, the car is fitted with a factory hard top, front and rear tow straps, and AeroCatch fastening latches on both the front storage compartment and rear engine lid. A substantial carbon-fibre wing has also been fitted at the rear, providing much-needed downforce and stability for fast track sessions.

It rides on a set of lightweight 18-inch gloss black Team Dynamics Pro Race alloy wheels, which have gained a few battle scars to their painted surfaces, but are in good structural order. The car also comes with a spare set of wheels, plus eight tyres including a set of wets.

Inside, the cabin has been stripped back to the bare essentials, and is fitted with a full, FIA-approved Custom Cages roll cage. Black Cobra Monaco Pro competition seats and Luke harnesses are fitted to keep the driver and occasional passenger safe and secure. The seats are on runners suitable for competition use, which means that more than one driver can race the car without major seat adjustment between stints. A Lifeline eight-nozzle plumbed-in fire suppression system has been installed, complete with digital controls and system check functionality, along with a CARTEK battery isolator.

The steering wheel is a suede-trimmed OMP rim with a quick-release wheel boss, and the original gear knob remains in place, albeit without its gaiter or any of the surrounding plastic trim. The door cards have been replaced with carbon-effect panels and surfaces in the driver’s eye line have been finished with matt black to reduce glare – though this would benefit from repainting in the driver’s footwell in particular. All of the functional items in the cabin work as they should.

Carefully prepared and well maintained over its racing career, this 986 Boxster S has only ever suffered from one ‘DNF’ result, which was down to a fault with the lambda sensor wiring. During its early life as a racing car, many of its mechanical parts were replaced with new items for the production championship, before it was fitted with a number of full race-spec parts for the CARTEK Roadsports 45-minute races.

These included a BTB bespoke exhaust system, an ITG Performance bespoke air filter, HiSpec Motorsport brake calipers and Mintex brake pads, while the ECU has been remapped to increase both the car’s power and torque.

In 2014, the engine was fully rebuilt by specialist JMG Porsche. The flat-six was in excellent order, but the decision was made to carry out the work to ensure it would continue to provide the reliability required for endurance events. The car’s last service was performed by Welch Motorsport in November 2019, when the wheels were removed and components lubricated, the brake fluid was changed, and a new bleed nipple was fitted to one of the calipers.

Prior to the start of the 2013 racing season, it benefitted from the replacement of its anti-roll bar drop links, flexi brake pipes, shock absorbers, coil packs, wheel bearings and radiators, to name just a few items. Its engine oil has always been renewed regularly through the seasons, after every round, to keep the running gear in fine fettle.

The wheels are fitted with Michelin Pilot Sport Cup competition tyres in size 225/40 ZR18 on the front and 265/35 ZR18 to the rear. While they are in good overall condition, the seller has described them as being too old for competitive racing; however they will be fine for more casual track days.

Accompanying the car are its original books and the stamped service record, with the latter including 11 stamps up until 2013. The seller is also supplying a number of bills, invoices and paperwork that evidence its race preparation and maintenance since then, giving the car a detailed history file.

This 986-generation Porsche Boxster S is a fully prepared racing car, which has proven its capabilities at a range of events over the years. Capable of giving road-going supercars a run for their money on circuits thanks to its remarkable grip, well-tuned handling and uprated power, this is a great opportunity to acquire a well-known Porsche track car that is ready to enjoy immediately.

* Consistently reliable with only 1 x DNF as a result of lambda sensor wiring.

* Started with a solid base. Road car with full Porsche and specialist history and not accident damaged.

* Engine rebuilt by JMG Porsche specialists at the beginning of 2014

* All new suspension components replaced when built along with new radiators and more to ensure optimum reliability.

* Oil changed every round.

Build cost around £45k. Ready to drive and race.

Brand new build is in stock or built to order.

The most cost-effective single-marque Porsche racing in the UK.

CSF race specification radiators and intercoolers for over 117 applications