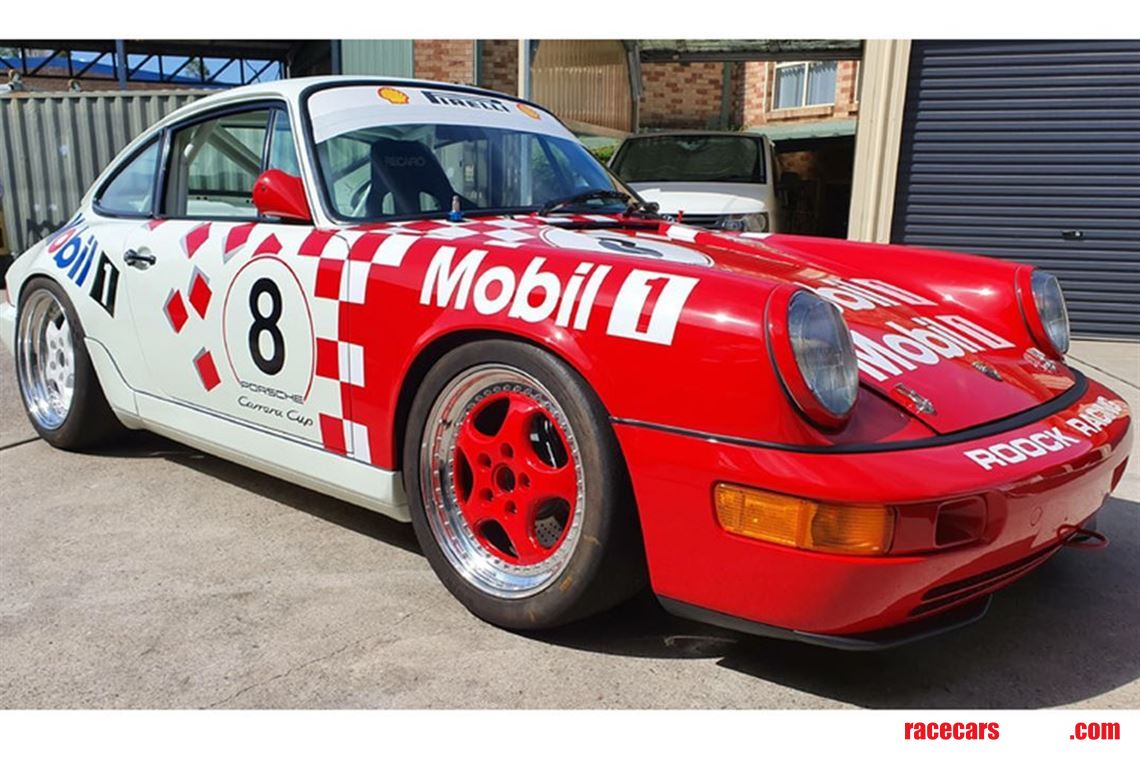 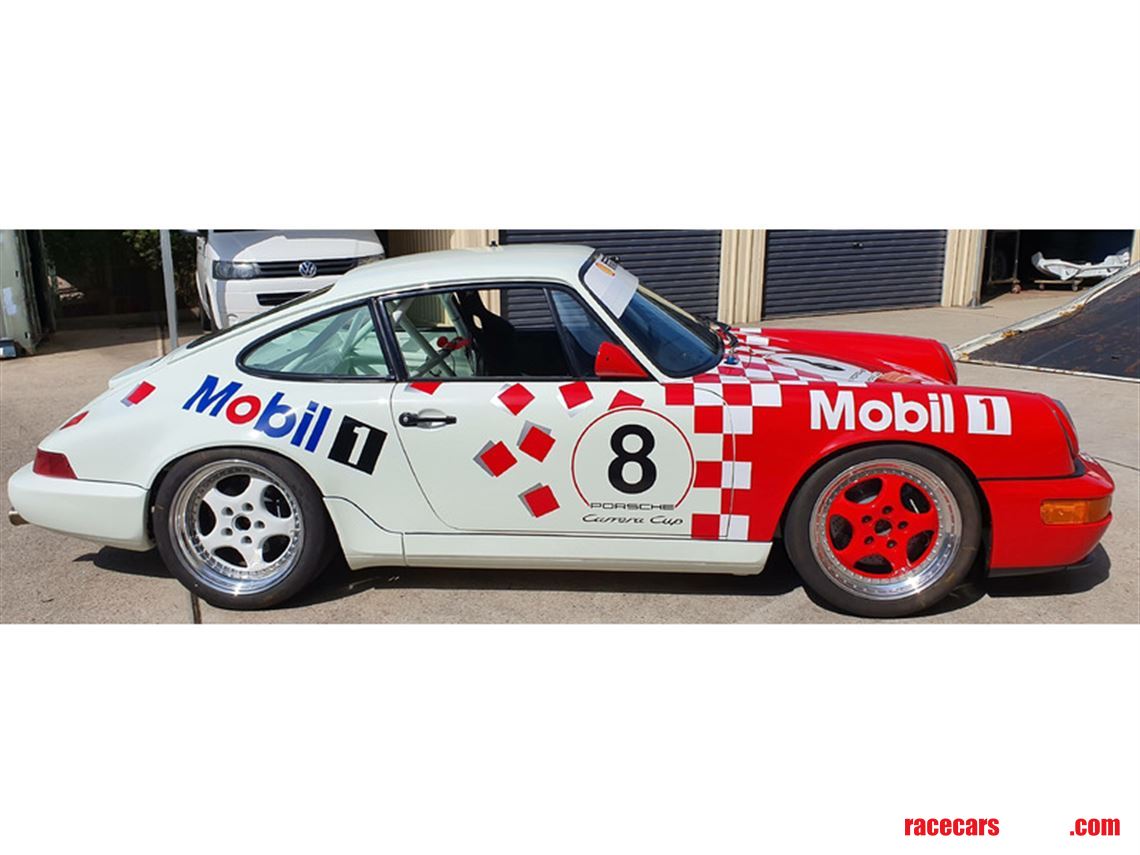 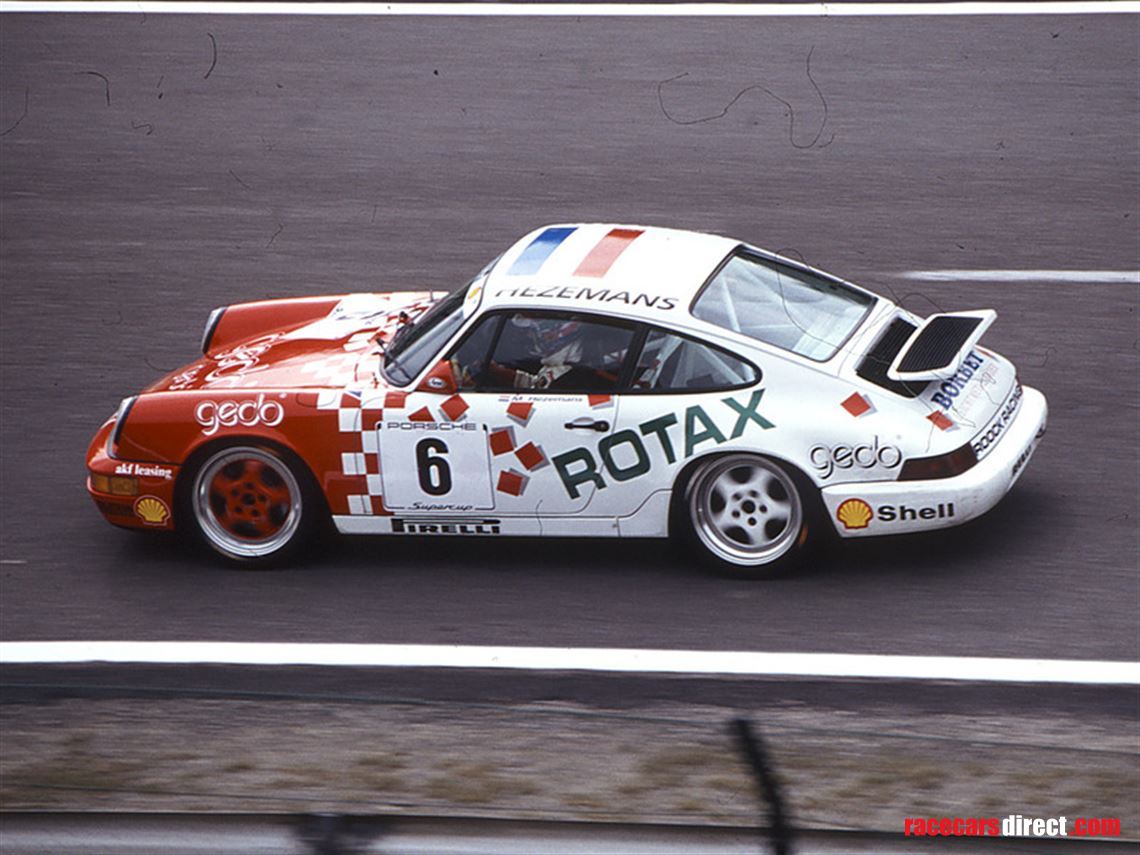 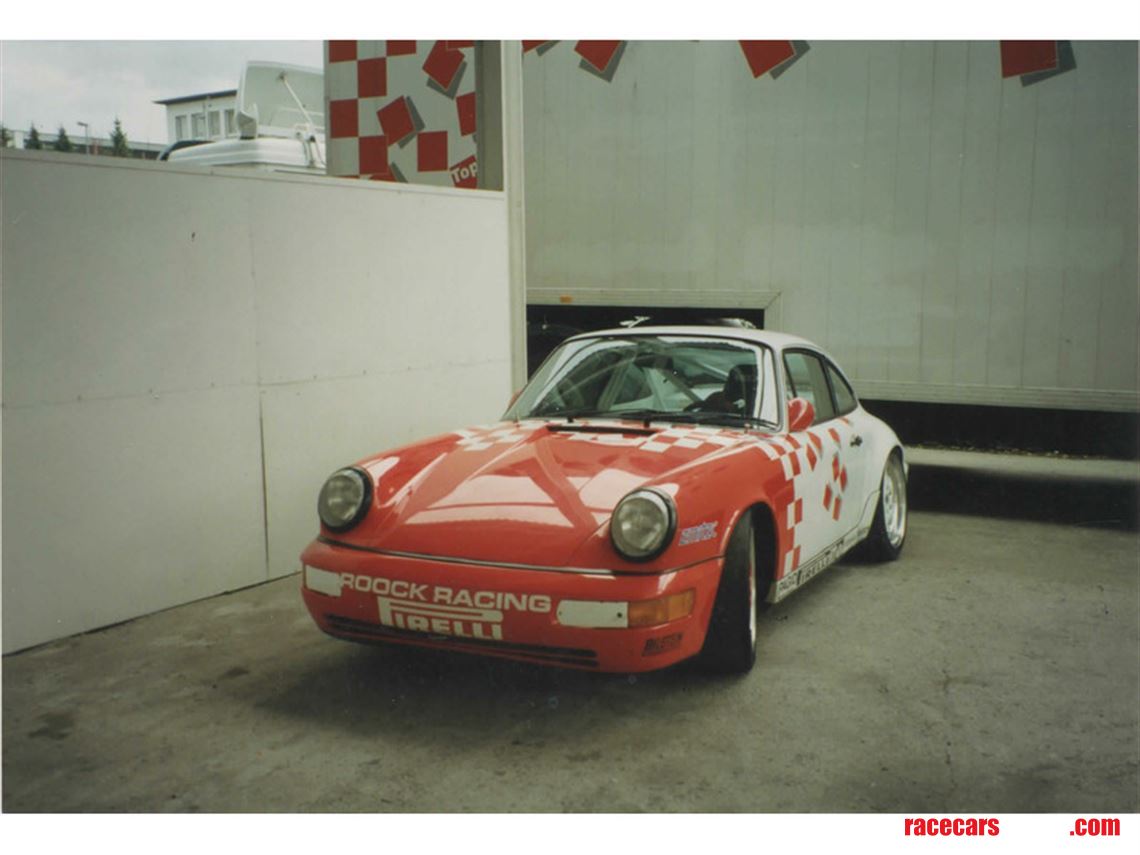 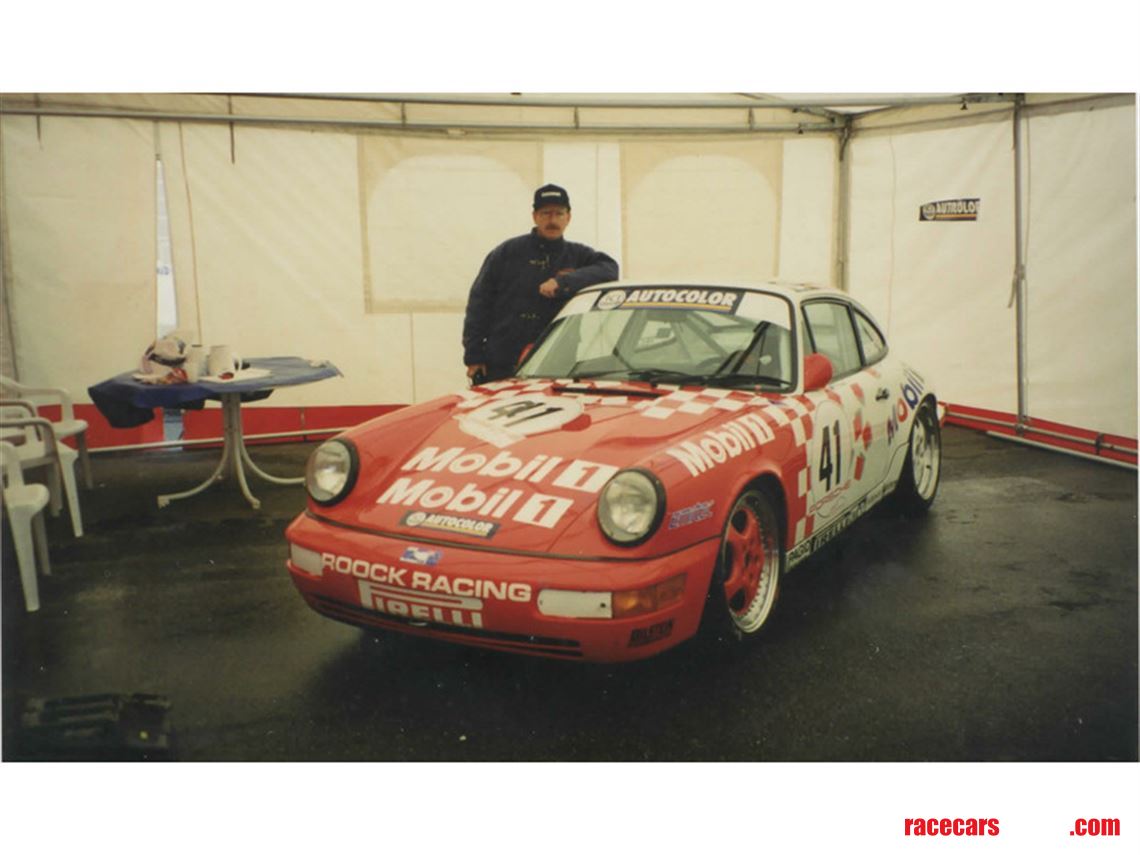 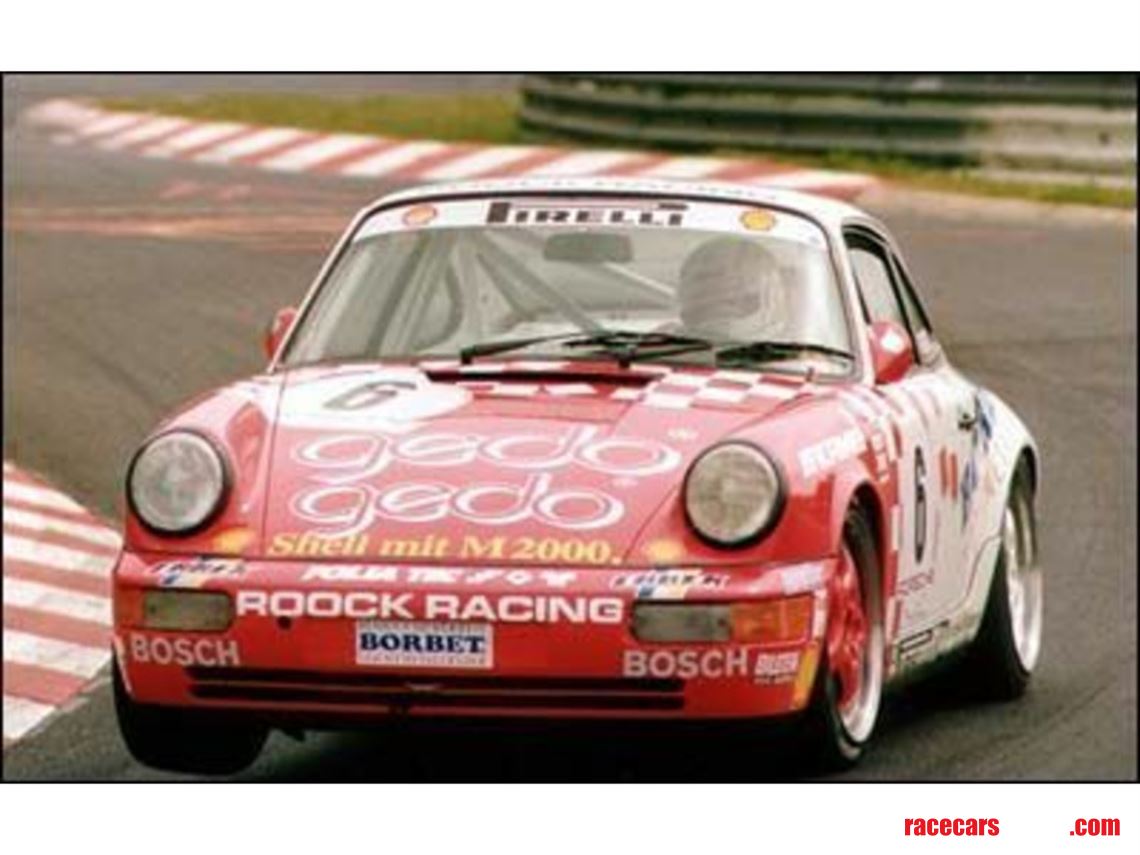 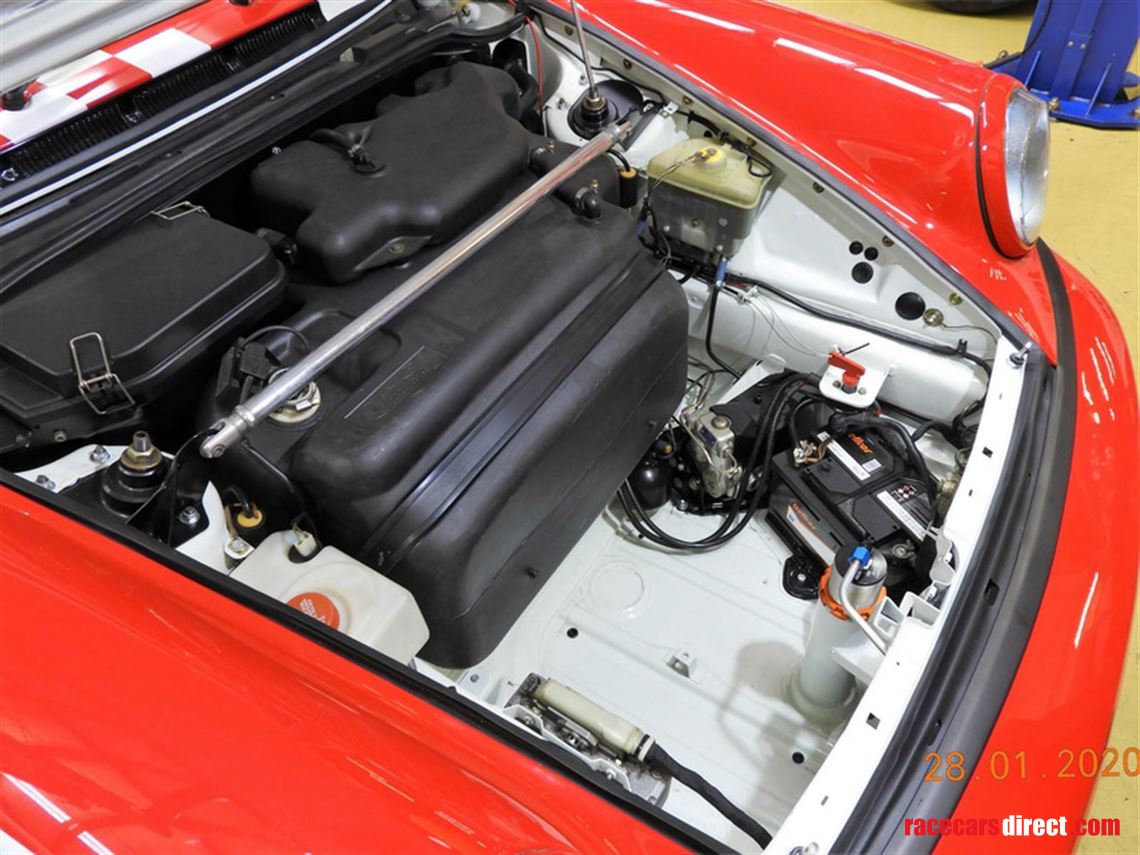 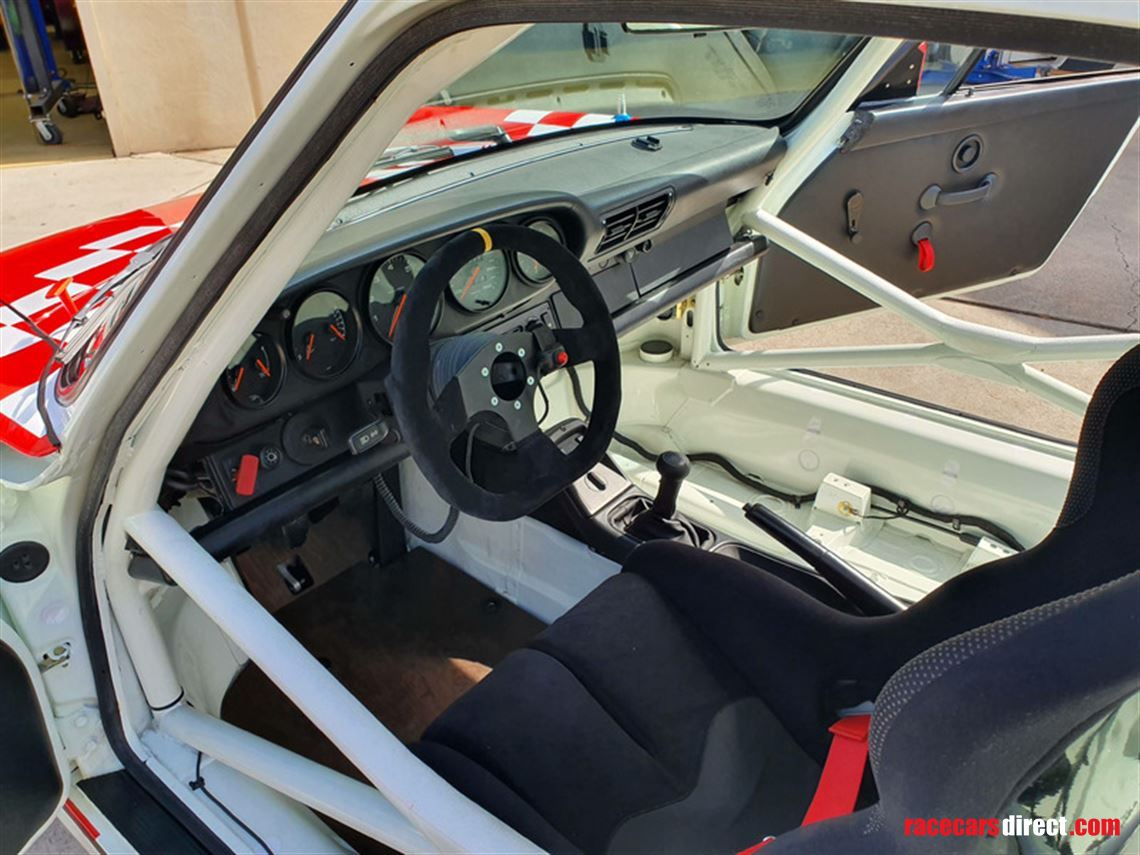 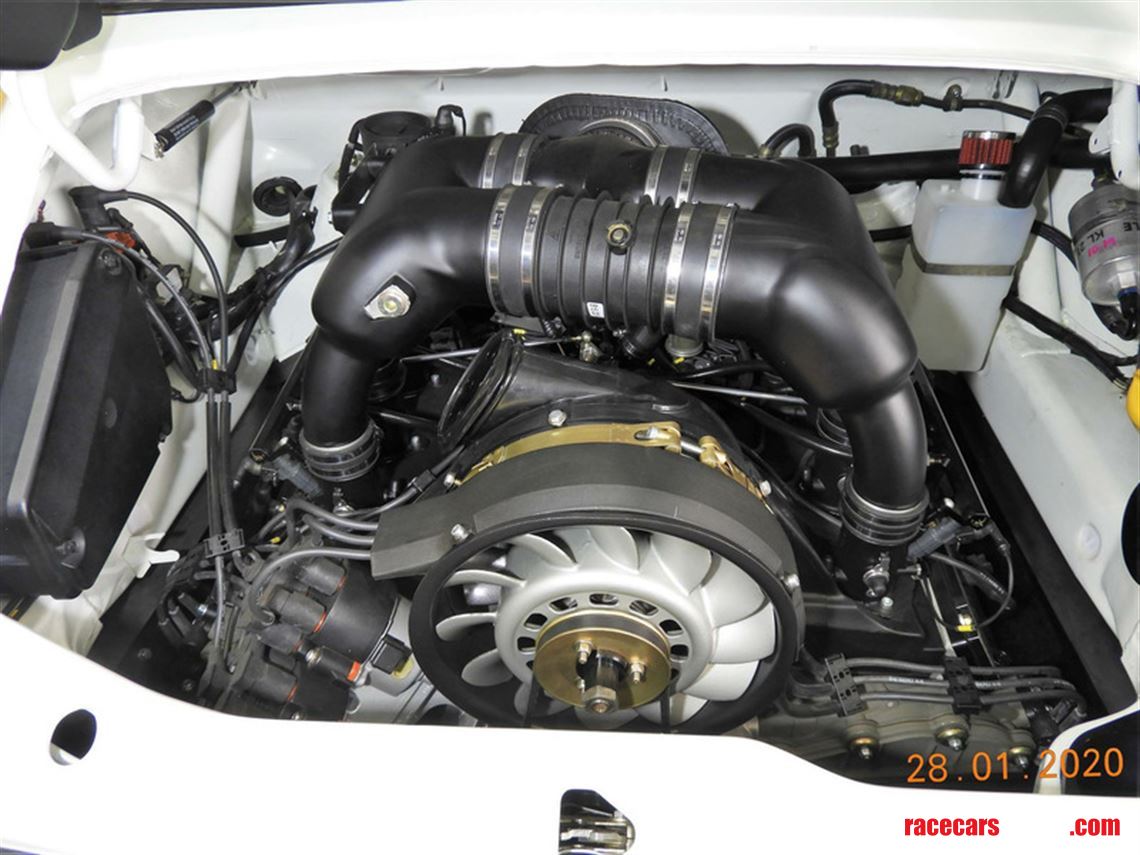 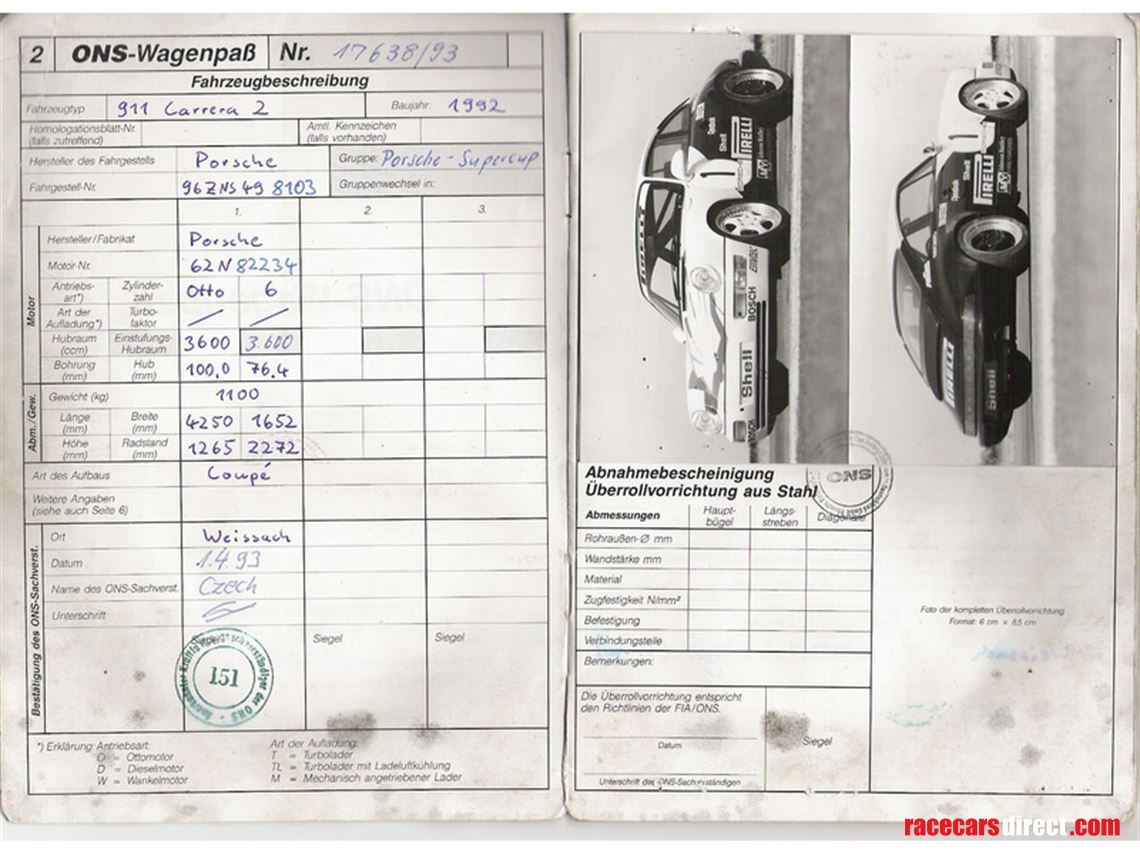 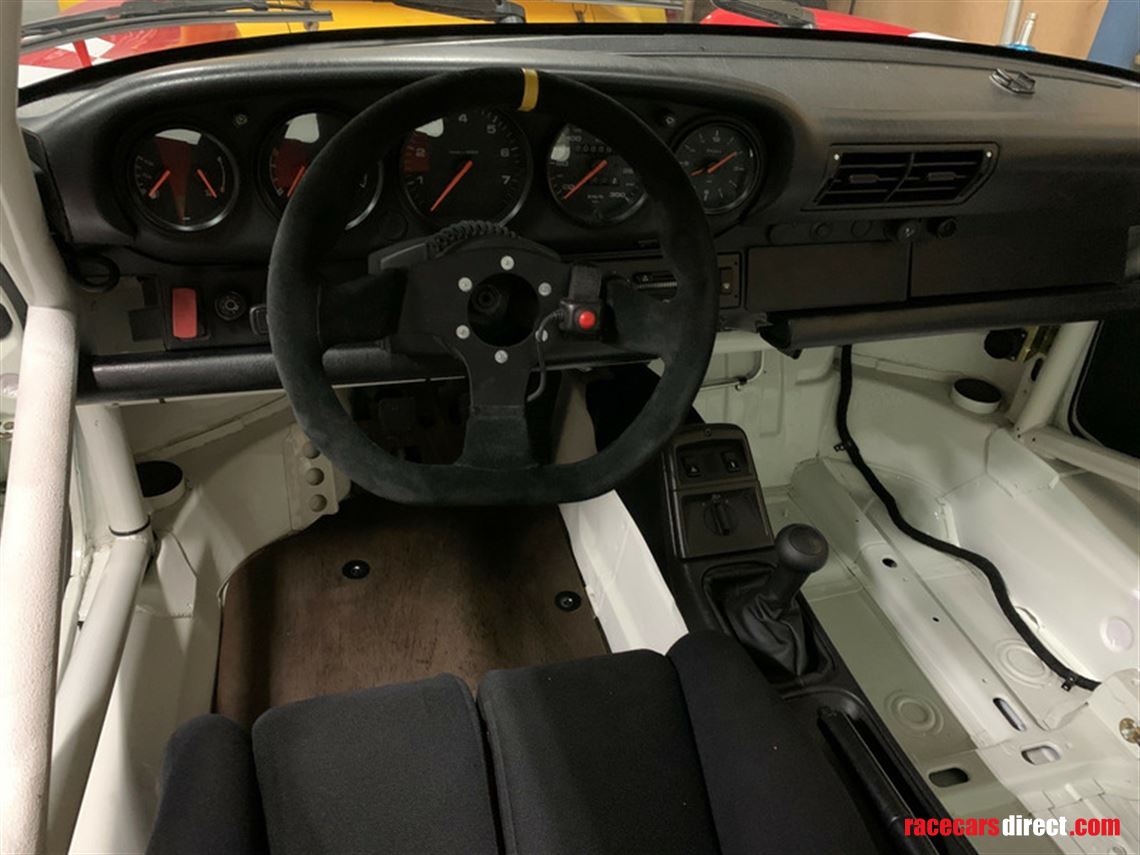 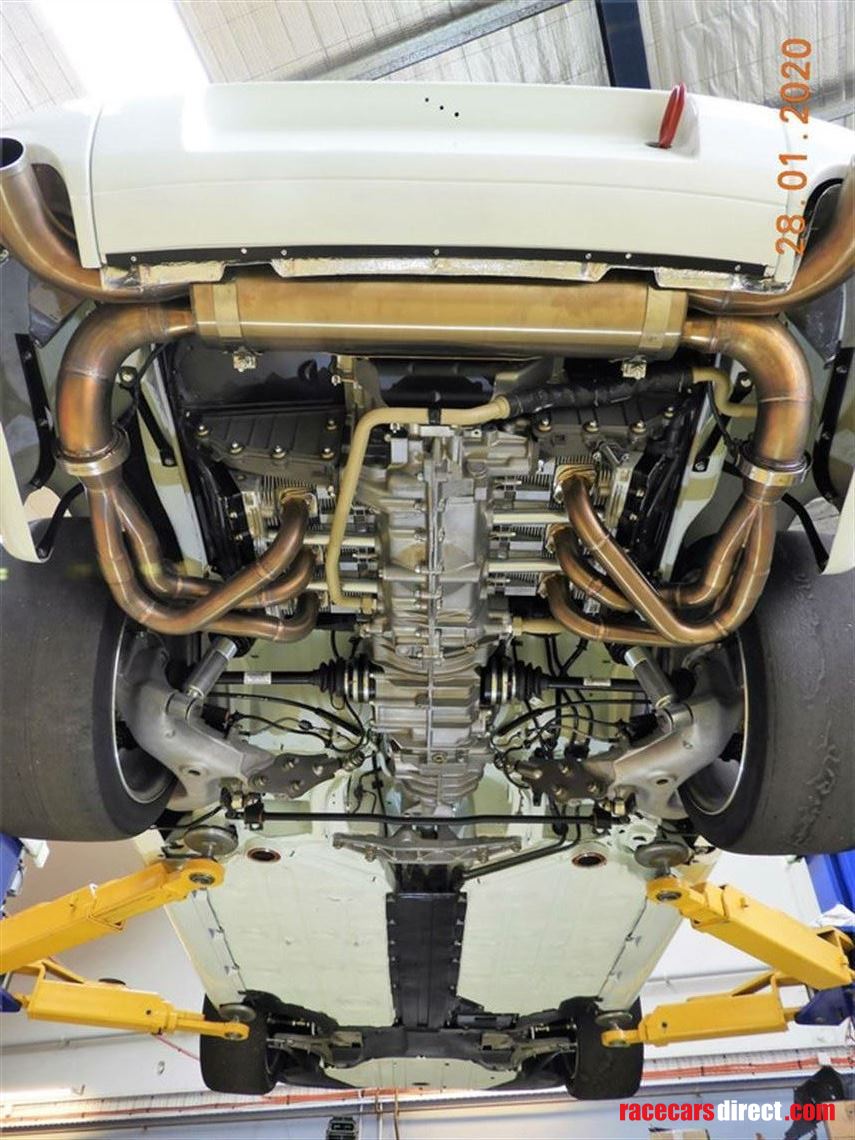 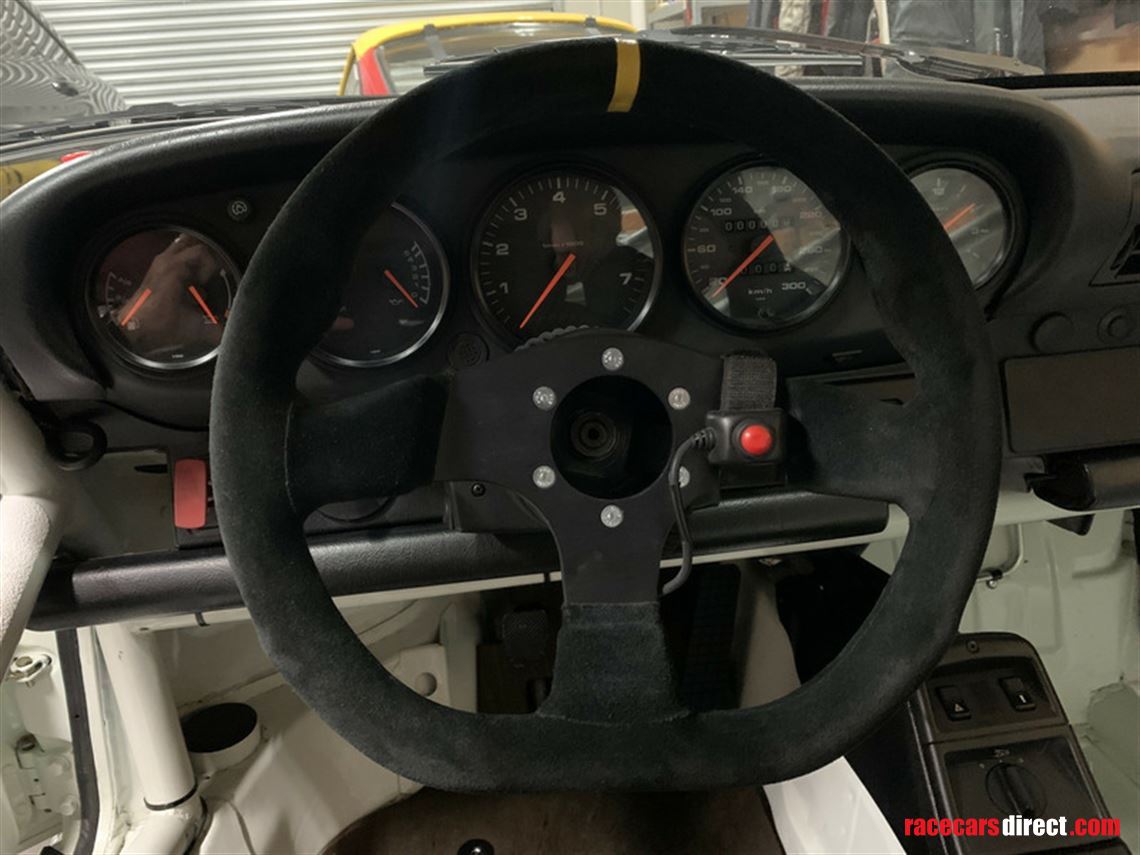 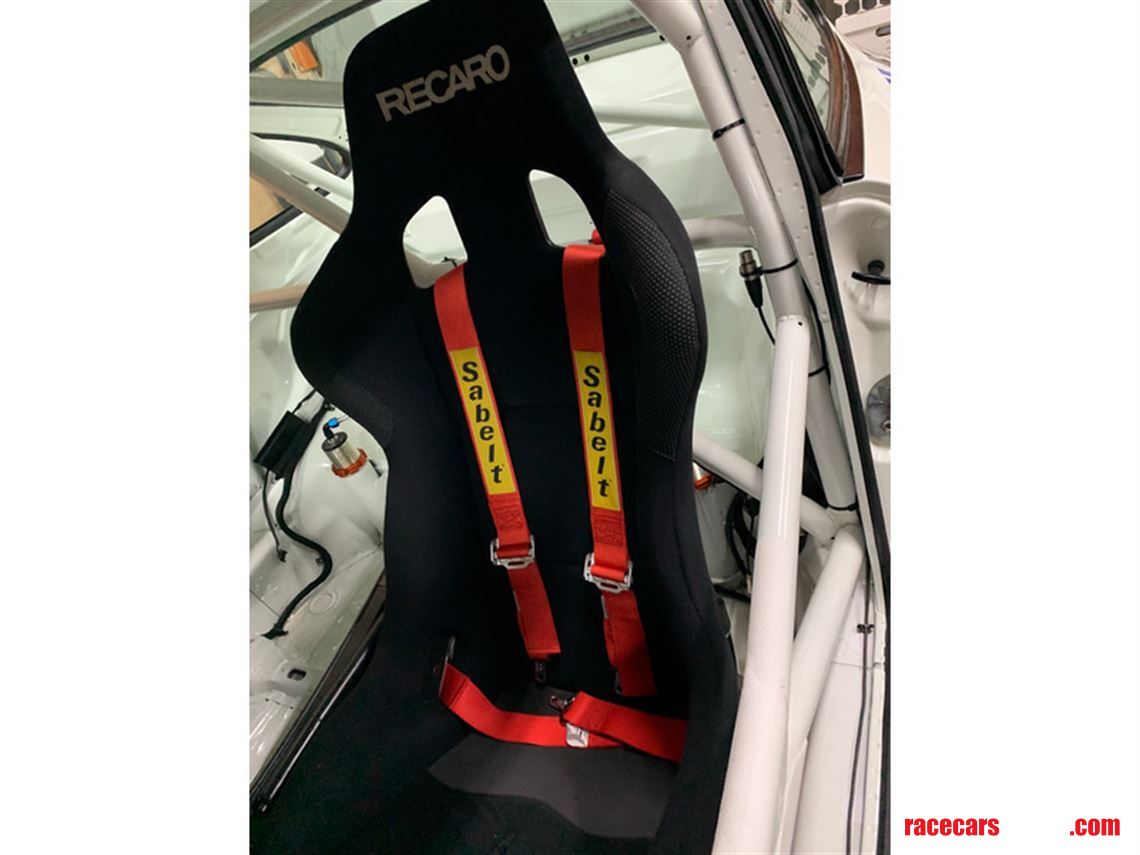 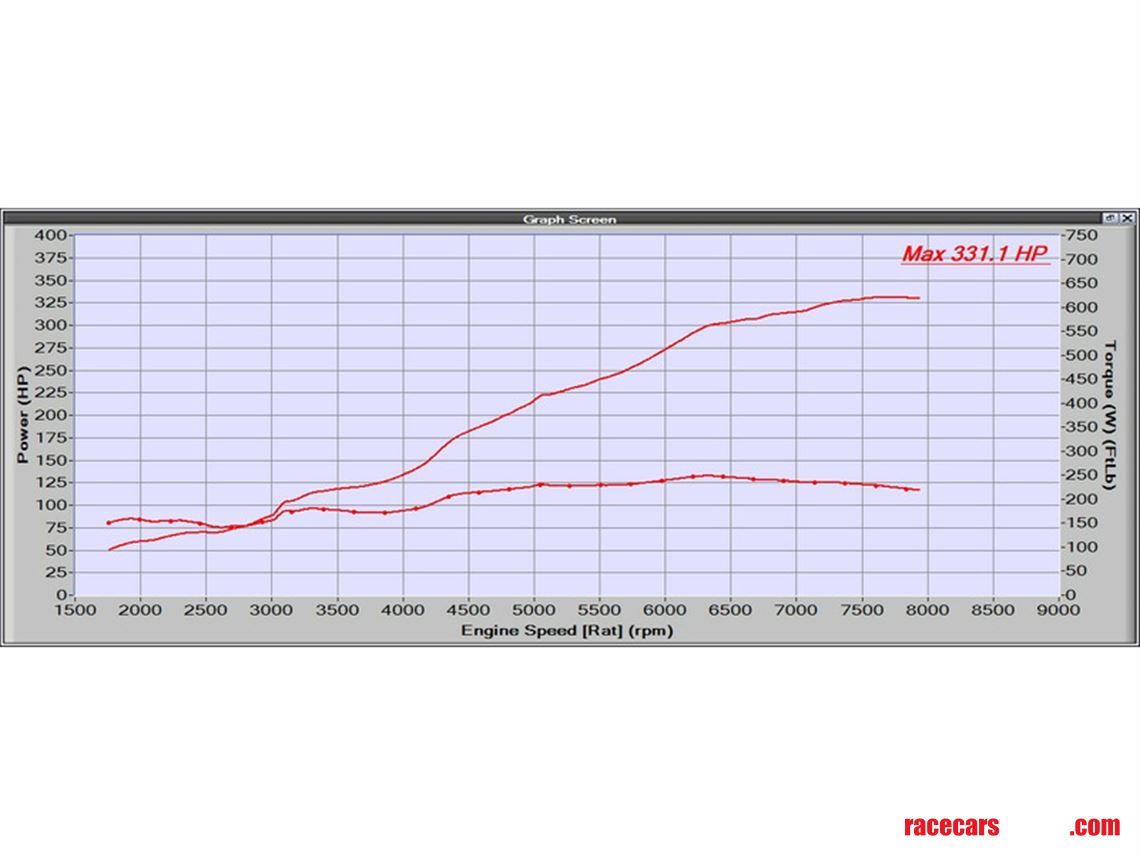 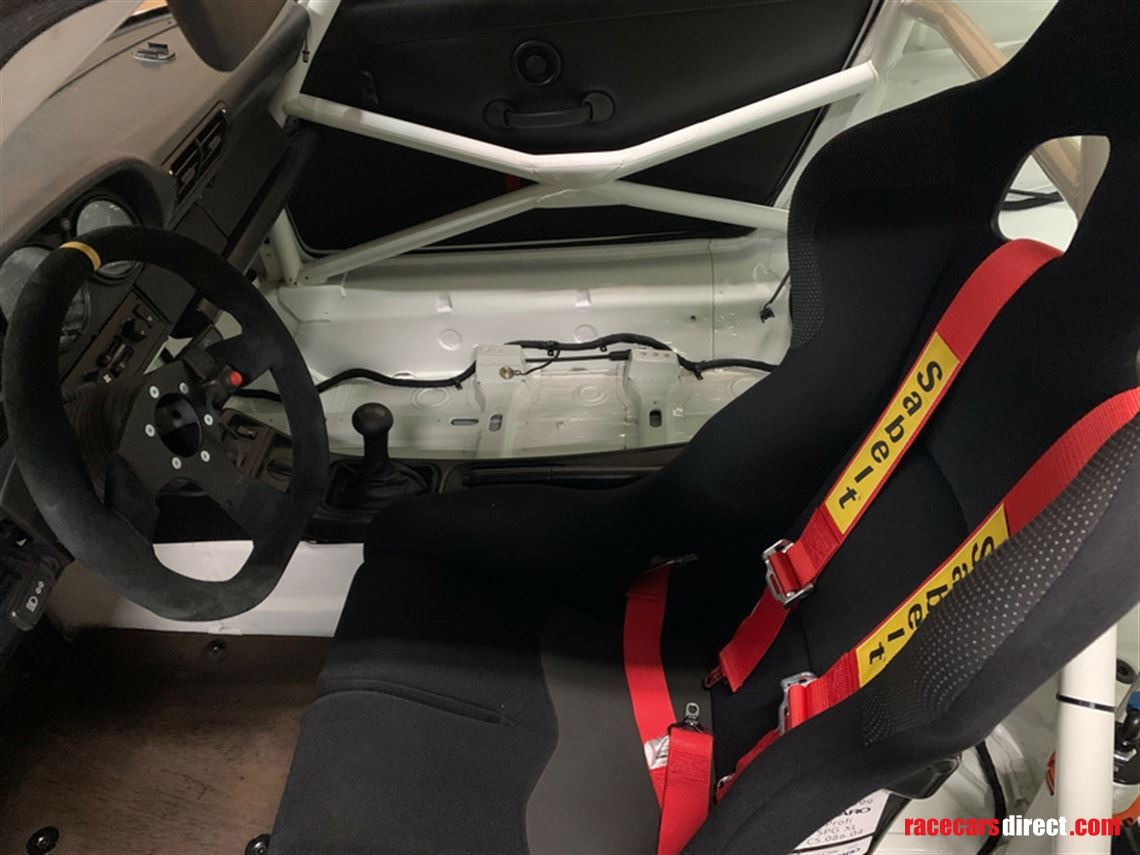 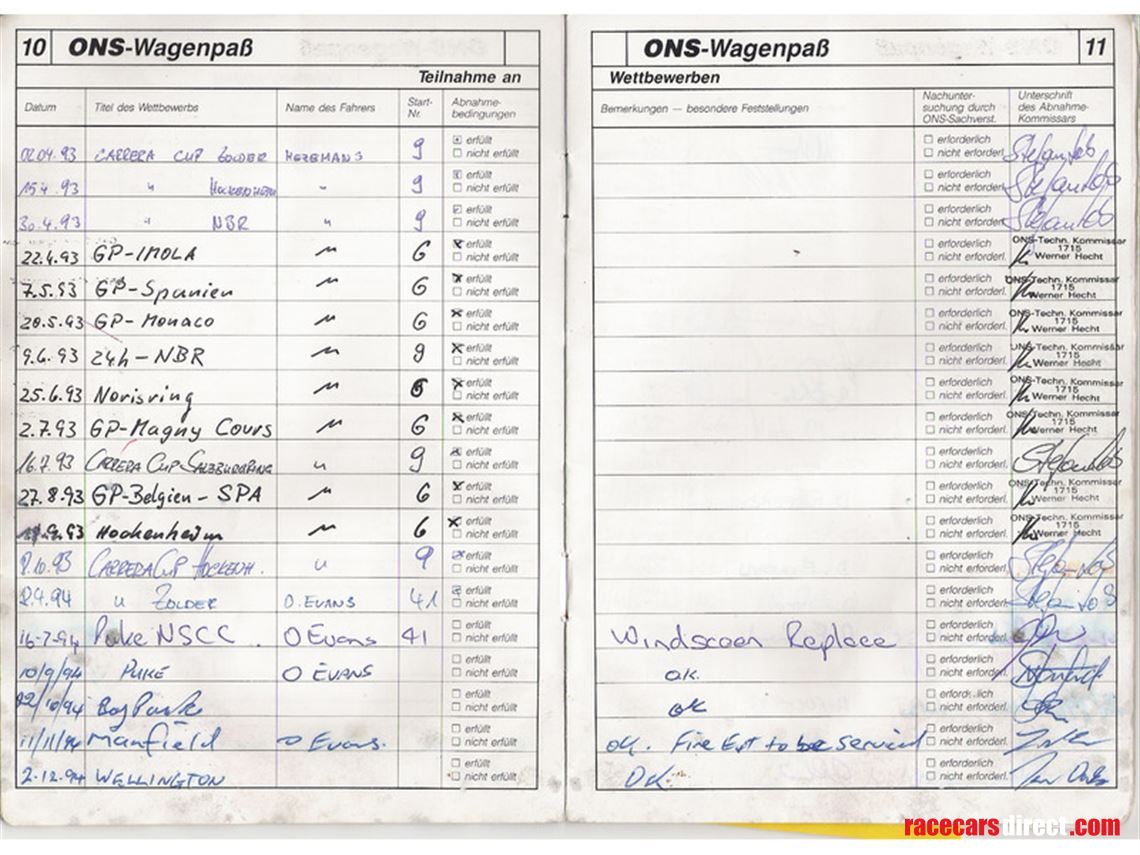 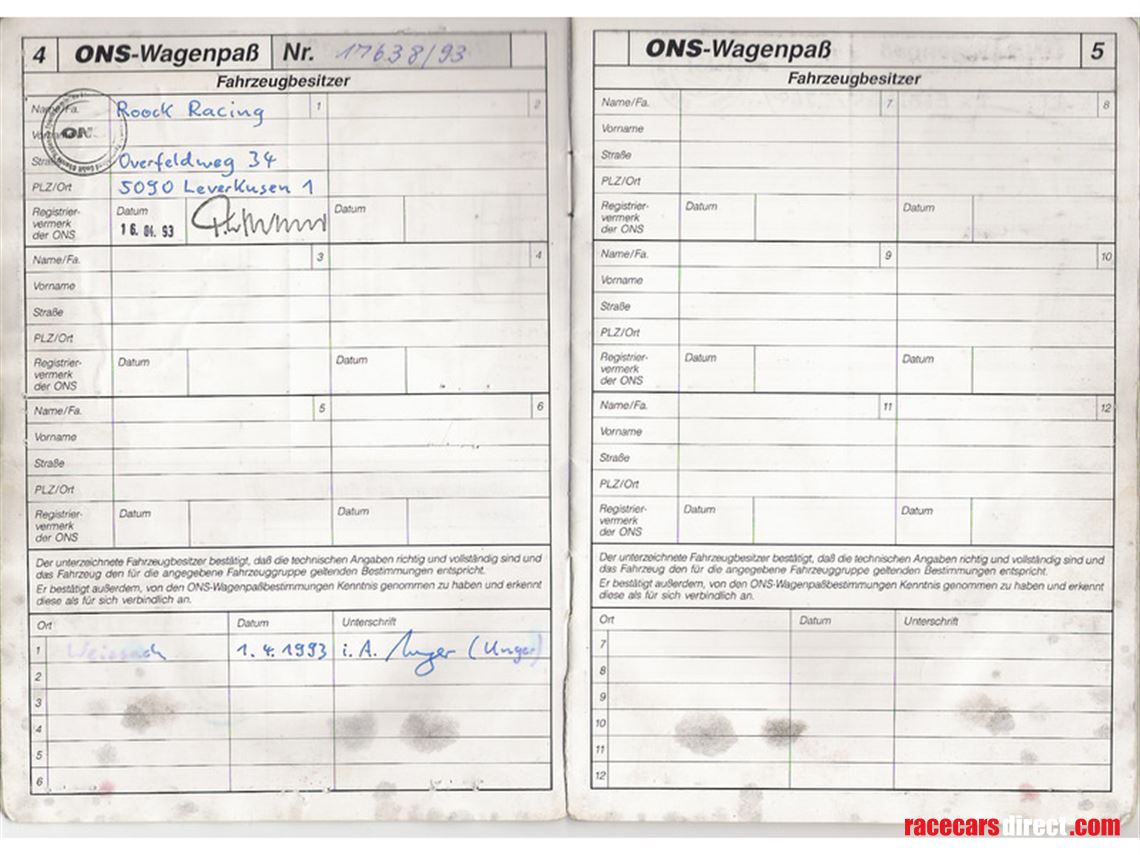 We have the pleasure to offer this stunning 1992 second generation Porsche 964 Cup car for sale.

Porsche introduced the 964-based Carrera Cup in 1990 as a single-model "Spec-racer" championship to replace the successful 944 Cup series. Based on the Porsche 964, the 964 Cup was the 1990 racing version for this new Carrera Cup championship. In addition to an increase in output by 11 kW to 195 kW (265 hp) the 964 Cup had a welded Wilfried Matter roll-cage, a single Recaro race seat with six point safety harness and a fire-suppression system. The suspension was stiffened with shorter springs, Bilstein gas-filled shocks and fully adjustable anti-roll bars front and rear, a modified chassis set-up and the ground clearance was 55 mm lower than on the standard version. To reduce weight: the interior and the sound-proofing material was removed. The gear ratios were modified and it had non power-steering with a faster ratio, a catalytic converter and an anti-lock braking system (ABS). In 1992, the 964 Cup had a major revision whereby it now had the body from the 964 RS and the engine produced 202 kW (275 hp). Another major change was that the ABS could be switched off in the event of emergency braking or whilst the car was going backwards. The car now had 18 inch magnesium rims which replaced the aluminium rims and the car was lowered by a further 20 mm. The normally aspirated air-cooled six-cylinder engines were selected by factory race engineers for equal output. They ran without air filters, the stock dual-mass flywheel was replaced with a single disc, and the electronic engine control units sealed to prevent tampering.

The Carrera Cup race series was staged nationally, regionally, and then internationally, often running as support events for Formula 1. They proved quite popular and successful.

Our car, a 2nd generation 964 Cup car with chassis number WP0ZZZ96ZNS498103, was one of two cars entered by the German Roock Racing team in both the 1993 German Carrera Cup as well as the international Porsche Supercup where it was driven by no other than Dutchman Mike Hezemans. Mike immediately set off with a win at the 1st race at Zolder and had many other podium finishes in both series including the Spa and Nurburgring 24hrs races. The car competed in 6 of the 10 races in the 1993 Carrera Cup achieving 1 win, 3 podiums and 1 pole position which resulted in Hezemans finishing 5th in the championship. He also raced in 7 of the 9 Super Cup races with 1 pole and 1 podium and a 6th position for the championship season. All 13 races are listed in the car’s original Wagenpass which accompanies the car.

After the 1993 race season, the car was bought by renown kiwi racer kiwi Owen Evans who raced the car in New Zealand after which it was owned by Kevin Cantwell (NZ) who then sold the car to its current owner in 2016. A full bare-metal-restoration was started including a rebuild of the engine (on an earlier 964 case), gearbox and all other mechanicals with great attention to detail and period correctness on all fronts. The car is offered for sale fresh from restoration and with zero hours. Evidence of its as-new condition can be seen in the video (see above link).

Spares that come with the car are:

This stunning and very 90ies livered Porsche 964 Cup offers a rare opportunity to the serious Porsche collector for show or enjoyment on the track. An opportunity not to be missed!

SOLD Could easily be modified to carry GT cars.

Make a statement and be the envy of the paddock, the impressive American Coach Revolution is the one