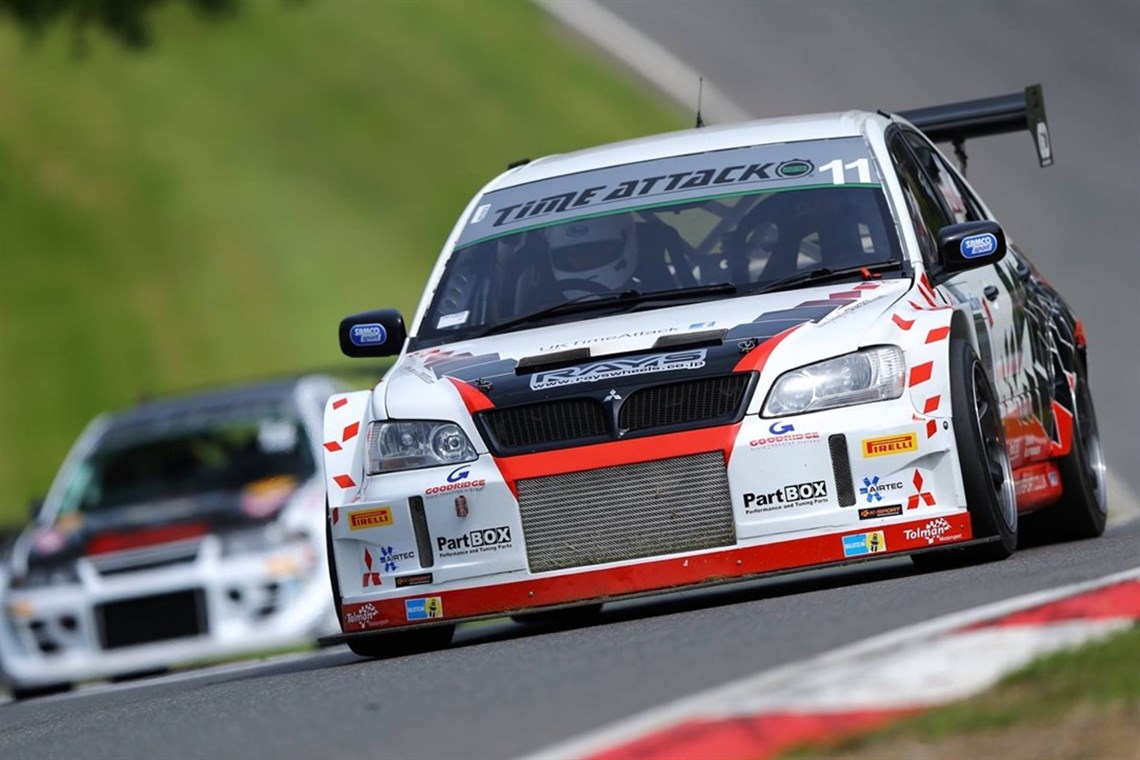 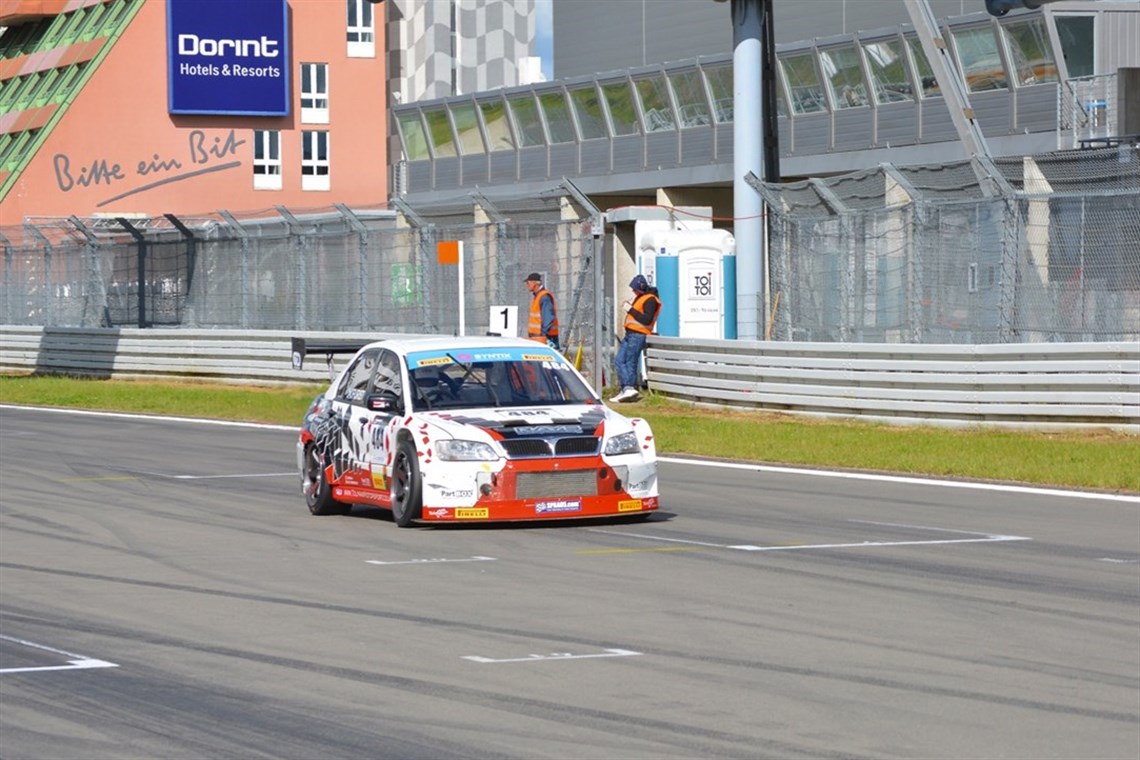 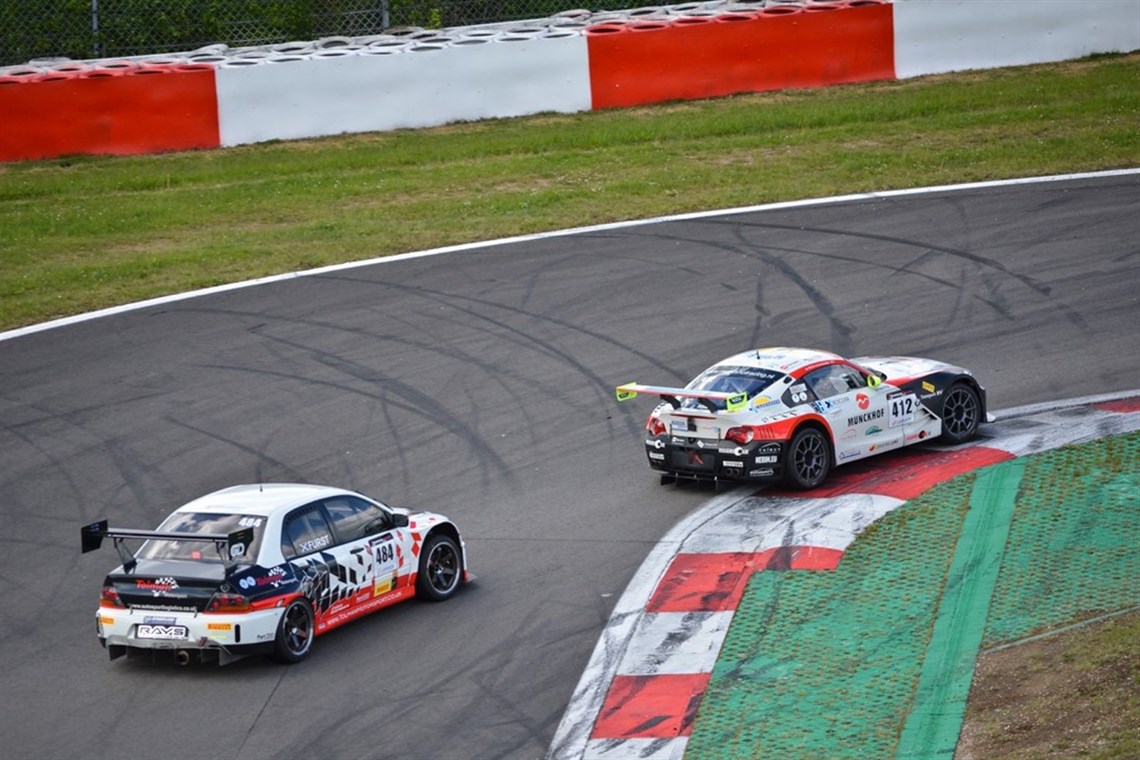 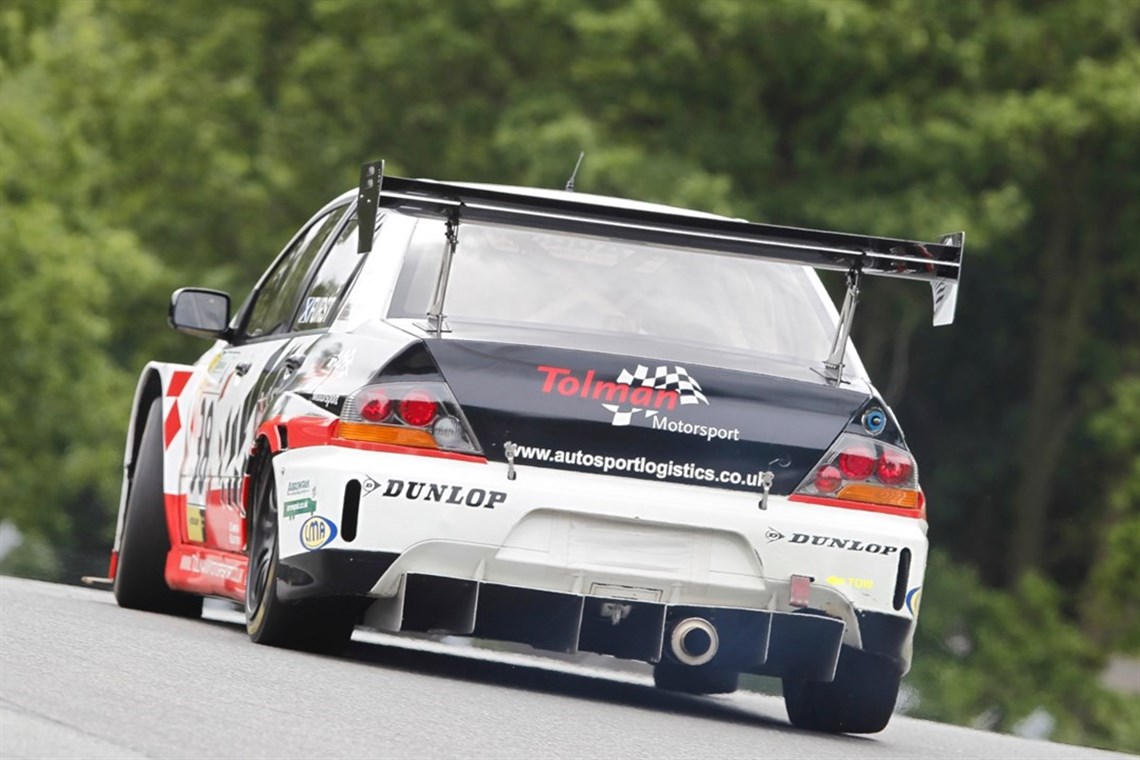 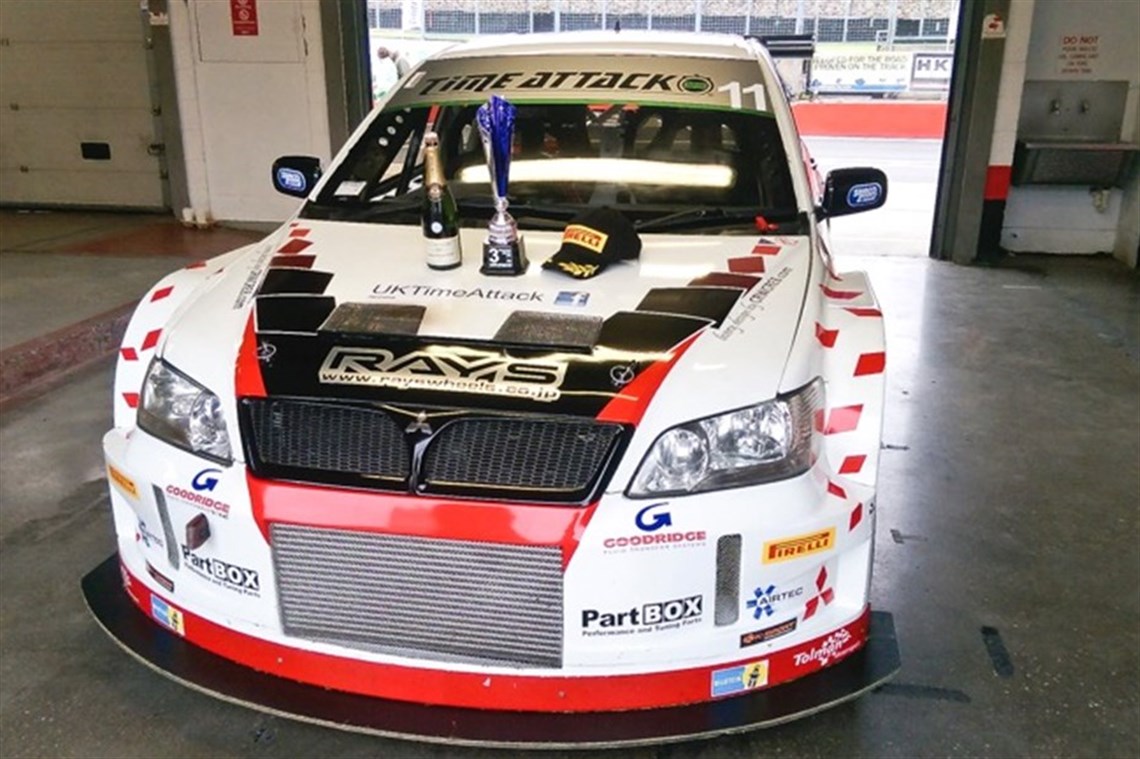 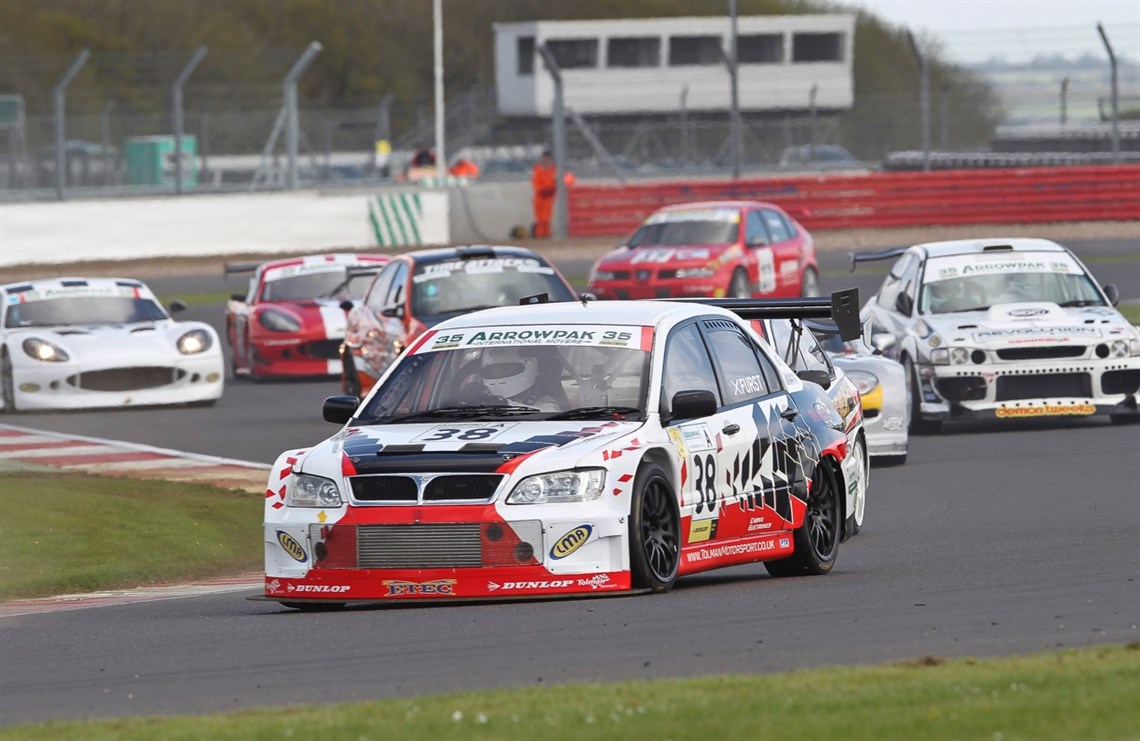 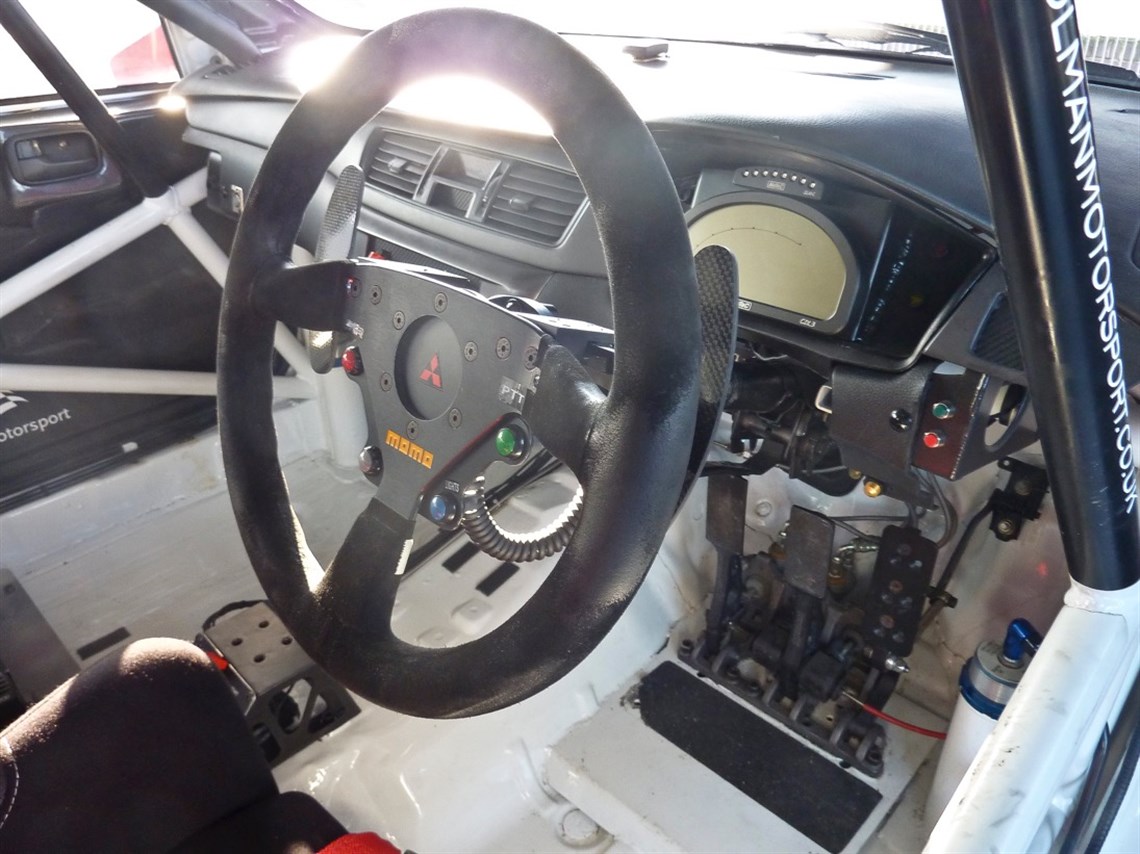 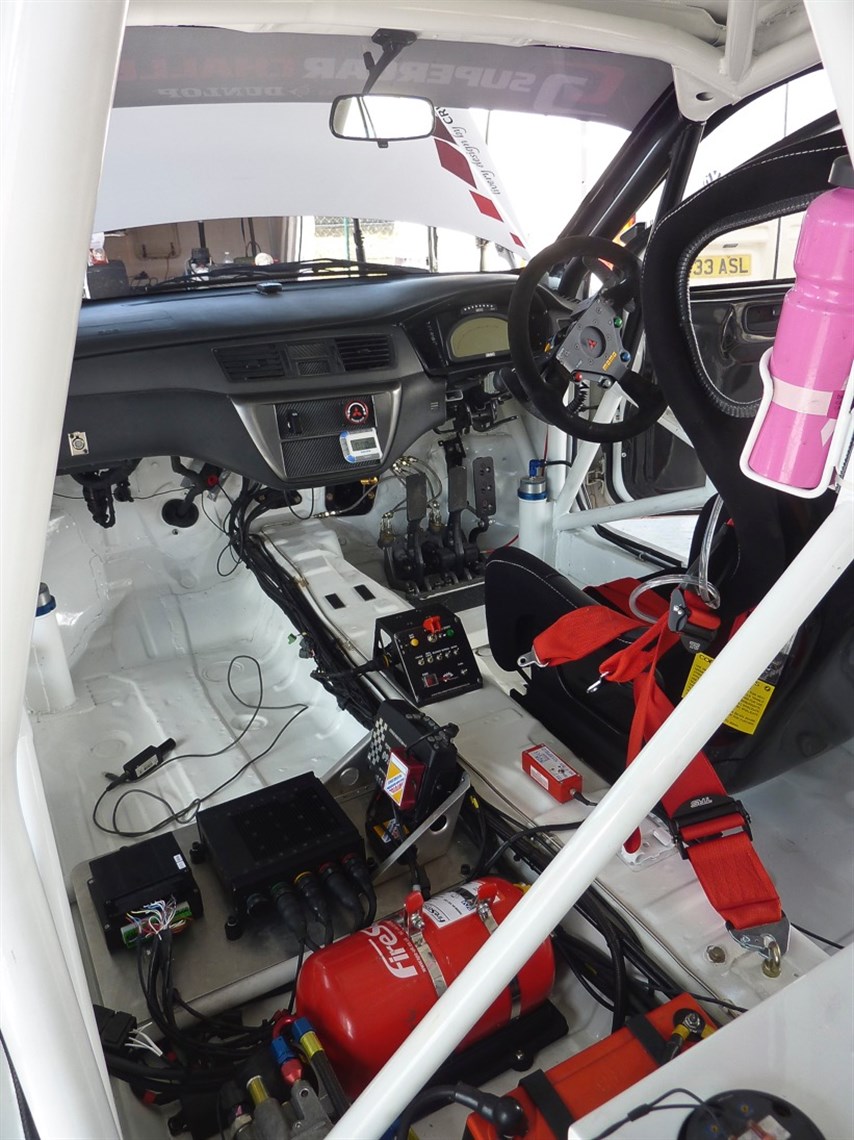 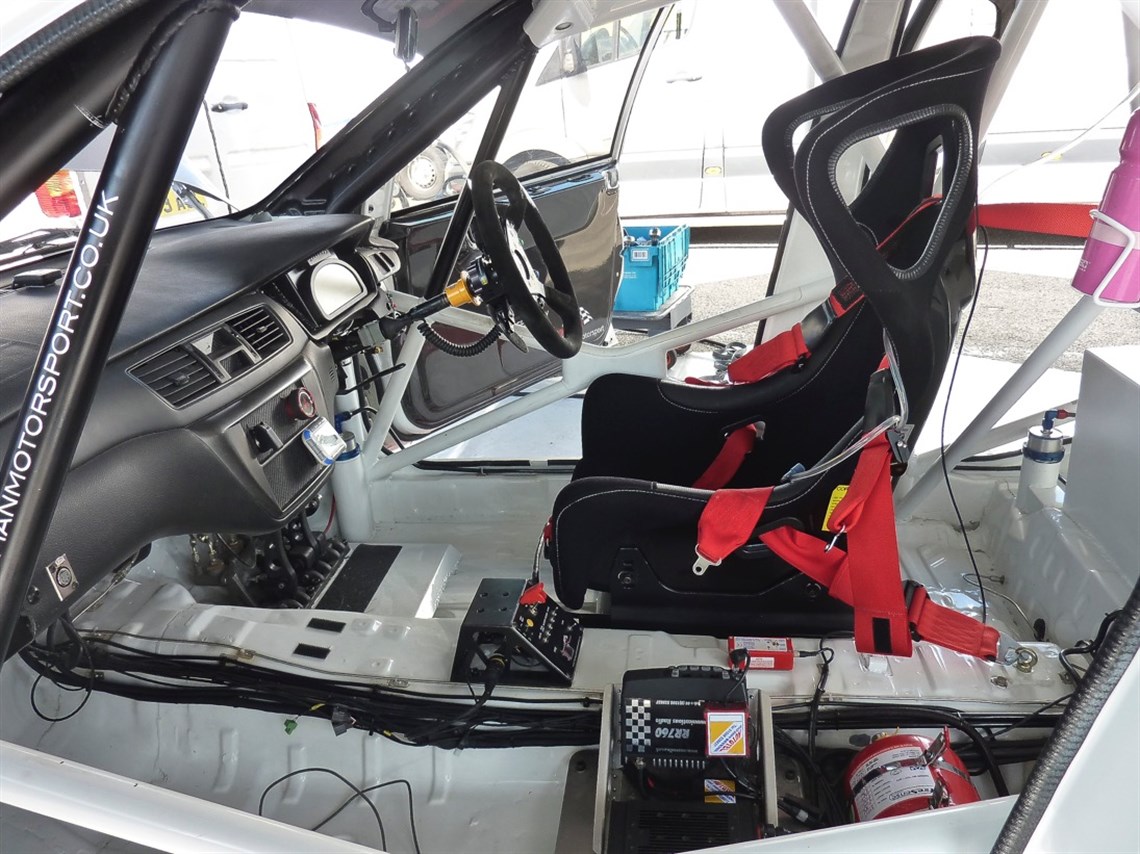 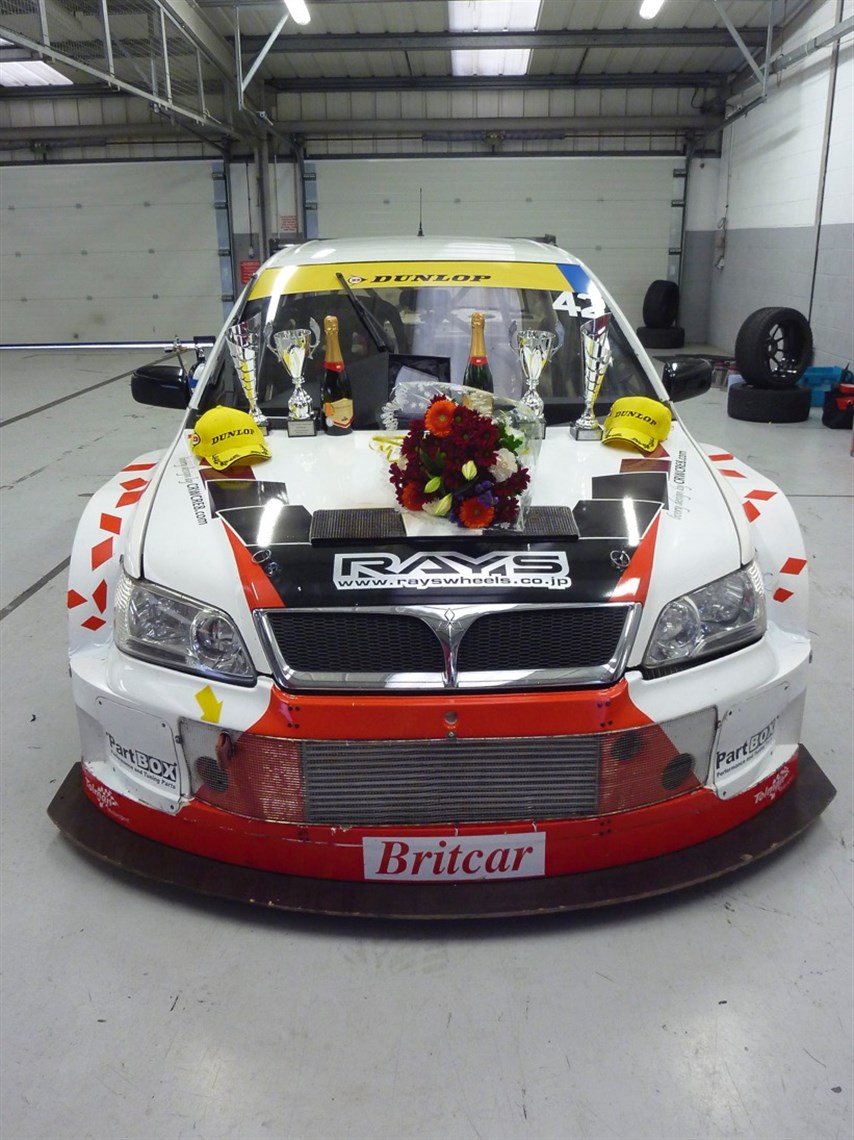 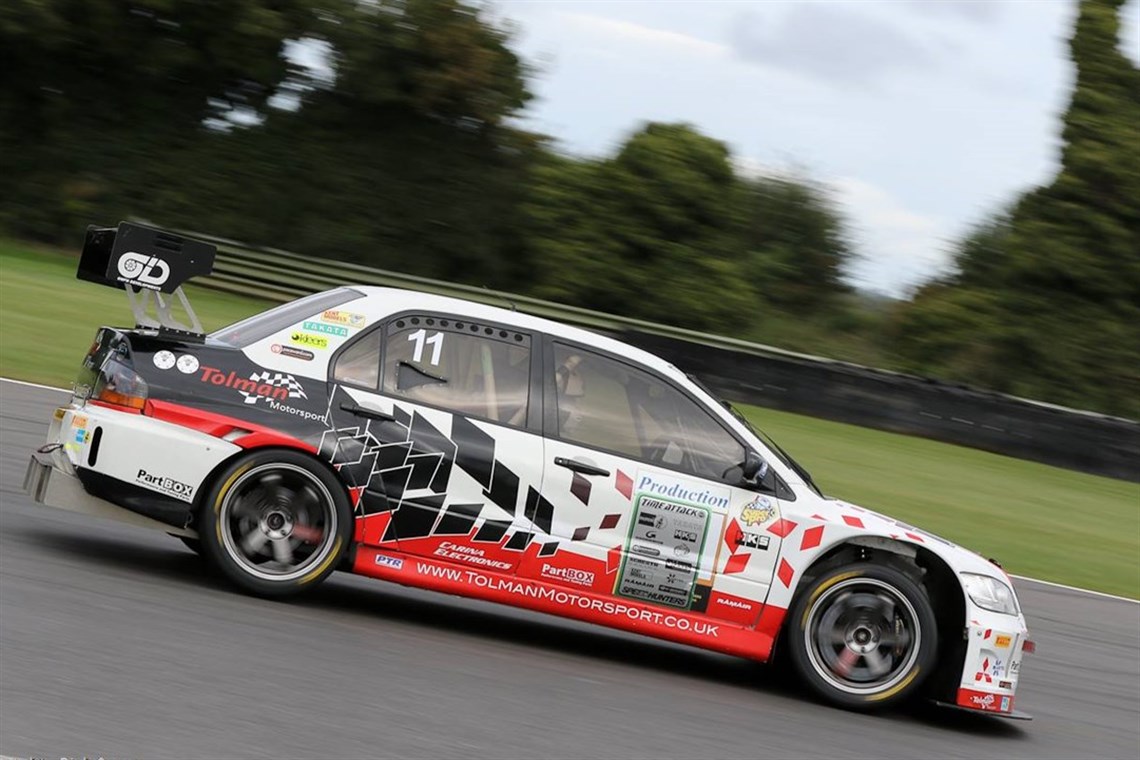 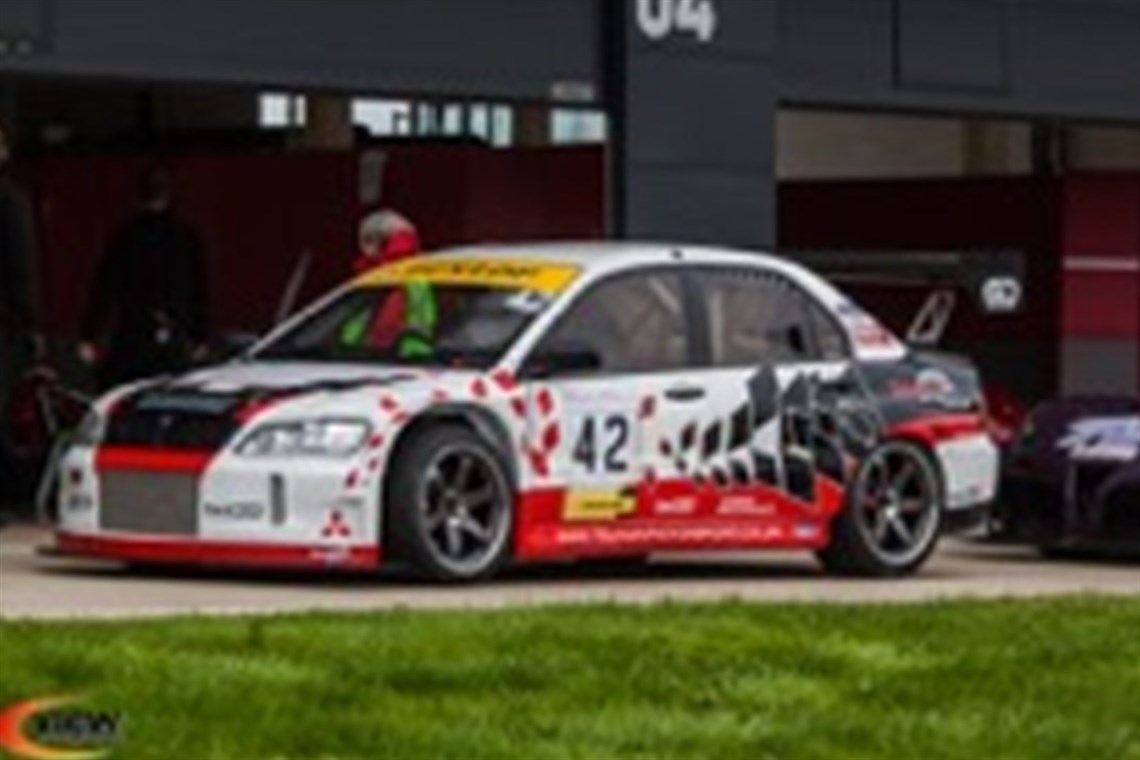 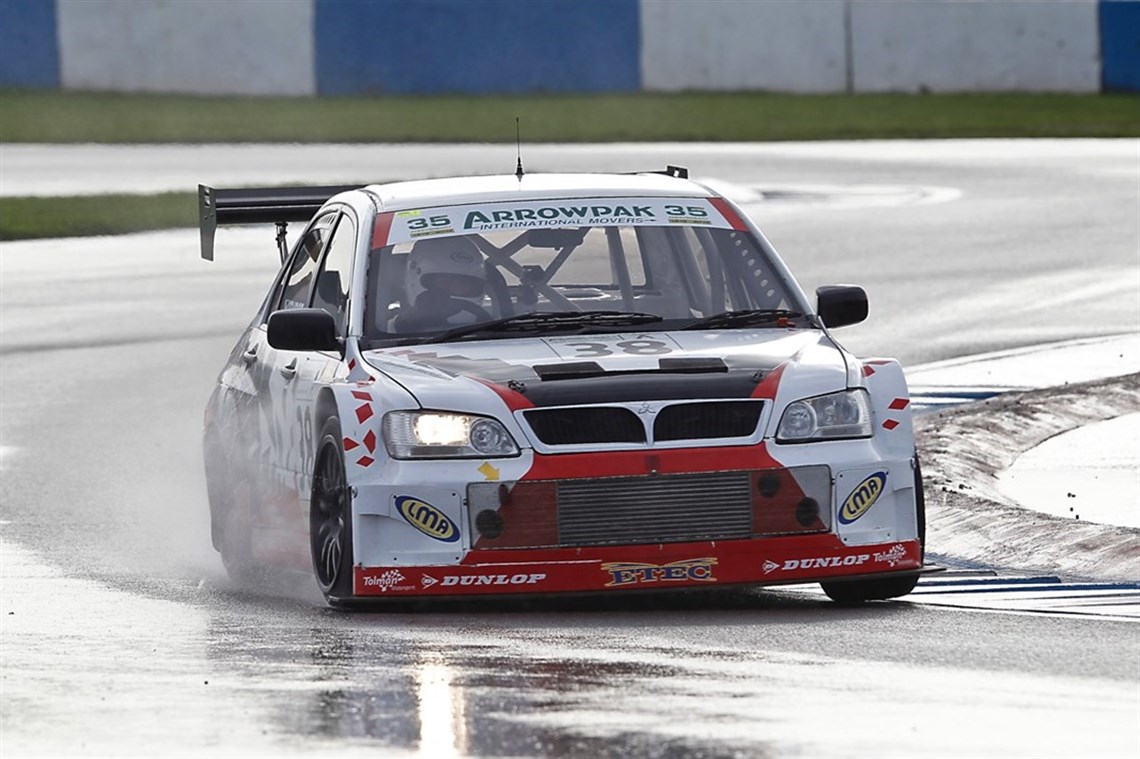 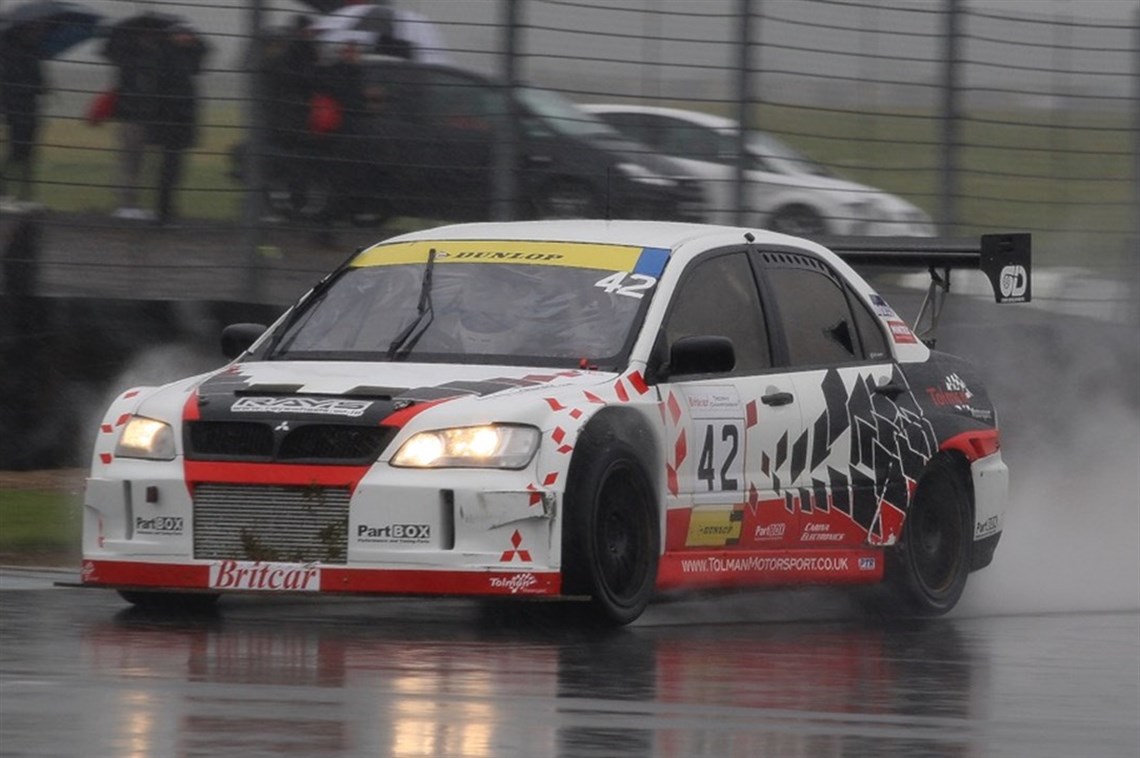 Based on a Road Registered Evo 9 GT (bought new and road registered in 2006), the emphasis has been to maximise the cars handling rather than simply to increase the horsepower. In the recent Brands Hatch Time Attack final the car was 20mph down on the competition across the start-finish line and yet was still the 3rd fastest round the lap.

Currently to fit in with “GT4 power/weight classes” of Britcar/SuperCar Challenge (formerly DSC) the dry-sumped, 2.2L Engine is producing 560BHP on Shell V-Power. To futureproof it, an additional fuel pump is already installed, so you could increase the power by flowing more fuel or by re-mapping the MoTec M800 ECU to use Race Fuel.

The car is fitted with a MakTrac 6 speed sequential dog-box (as used on the Ken Block Ford Fiesta) which is pneumatically operated via the Geartronics Paddle Shifter system.

The front end aero was made using the WRC Mitsubishi moulds and the rear uses an adjustable double plane wing acting directly on the body structure.  This combined with the flat underfloor and rear diffuser means that the car tracks stably up to its 160mph (256kph) max. As the rear diff is now out the airflow it has its own oil cooler circuit.

The Lower Track Control Arms and Front/Rear "quick swap" Anti-Roll bars are again WRC units and along with the bespoke 4-way adjustable Nitron dampers, top mounts and Momentum Motorsport rear suspension arms allow the optimum set-up to be made.

A MakTrac centre diff with a 46:54 F/R split along with the 6 way adjustable modified ACD system is used to give a slightly less understeer biased character to the car.

Electrical power distribution is handled by a Carina Electronics solid state programmable Power Controller, so there are no fuses to blow or solenoids to shake loose. All the wiring is by an F1 supplier.

The car has been competitive in each of the race series it has been entered in allowing podiums in Time Attack, Britcar,  BRSCC - Eurosaloons and the Dutch Supercar Challenge.

Fantastic opportunity to acquire an extremely well sorted Evo 9 at a fraction of it's development costs.

This Car is basically brand new. whole car rebuilt since 2018.

All Parts for Arrows F1 A22 wanted

We Will Buy Your Artic Race Transporter Today.

Hopkins Motorsport Ltd have been buying, selling and manufacturing race transporters for 20 years.