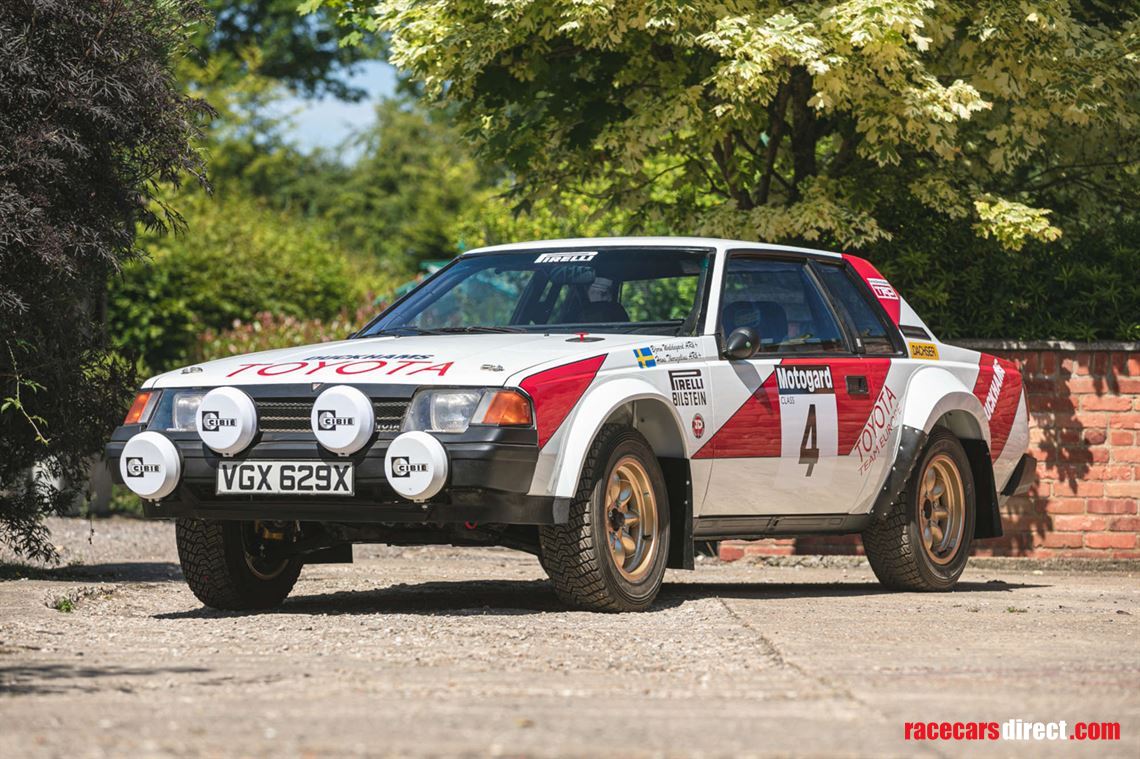 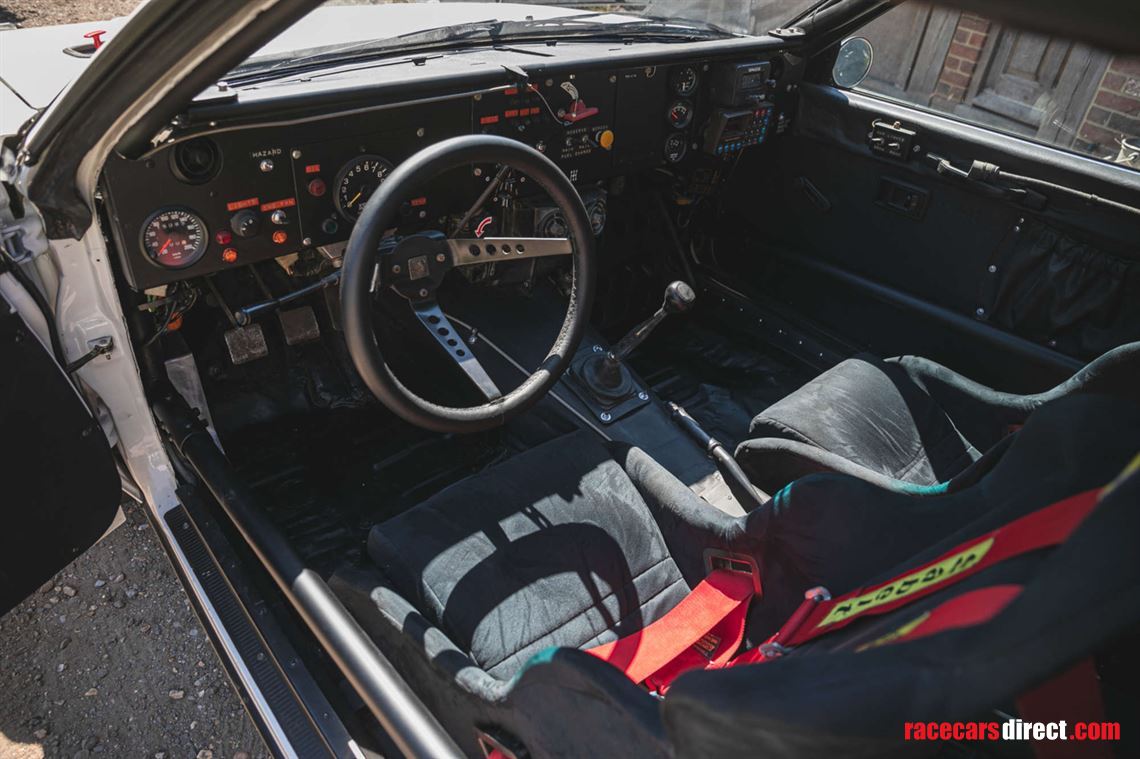 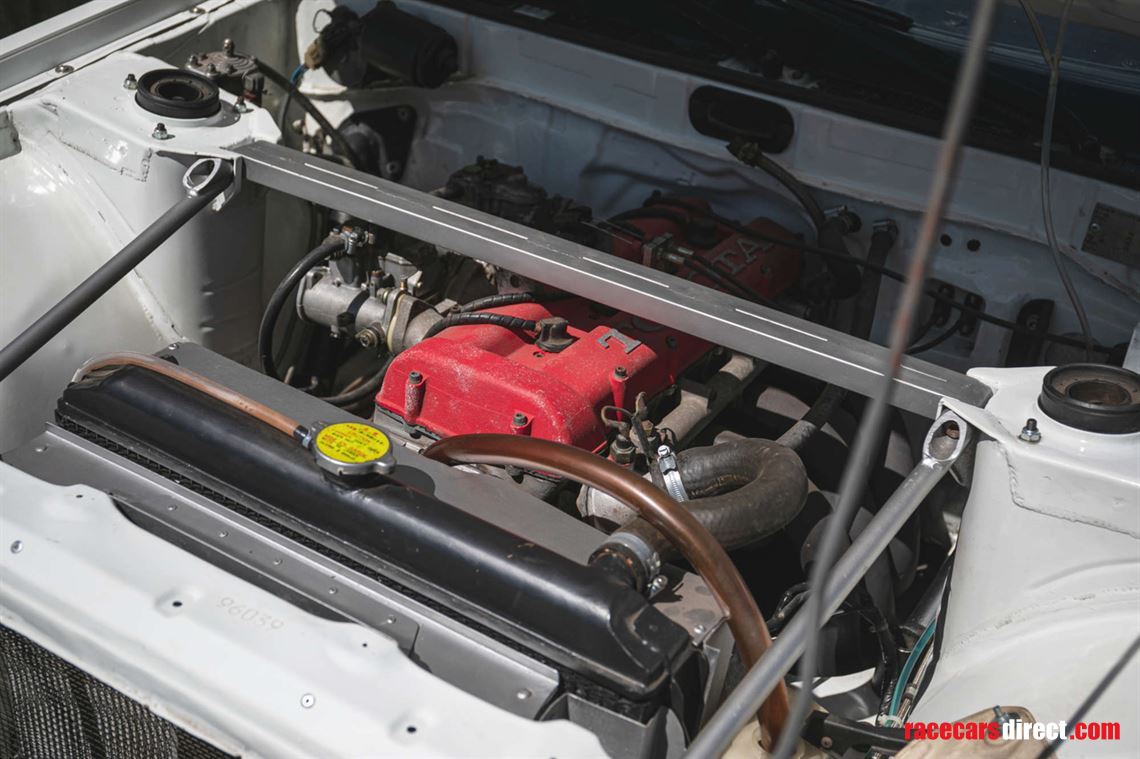 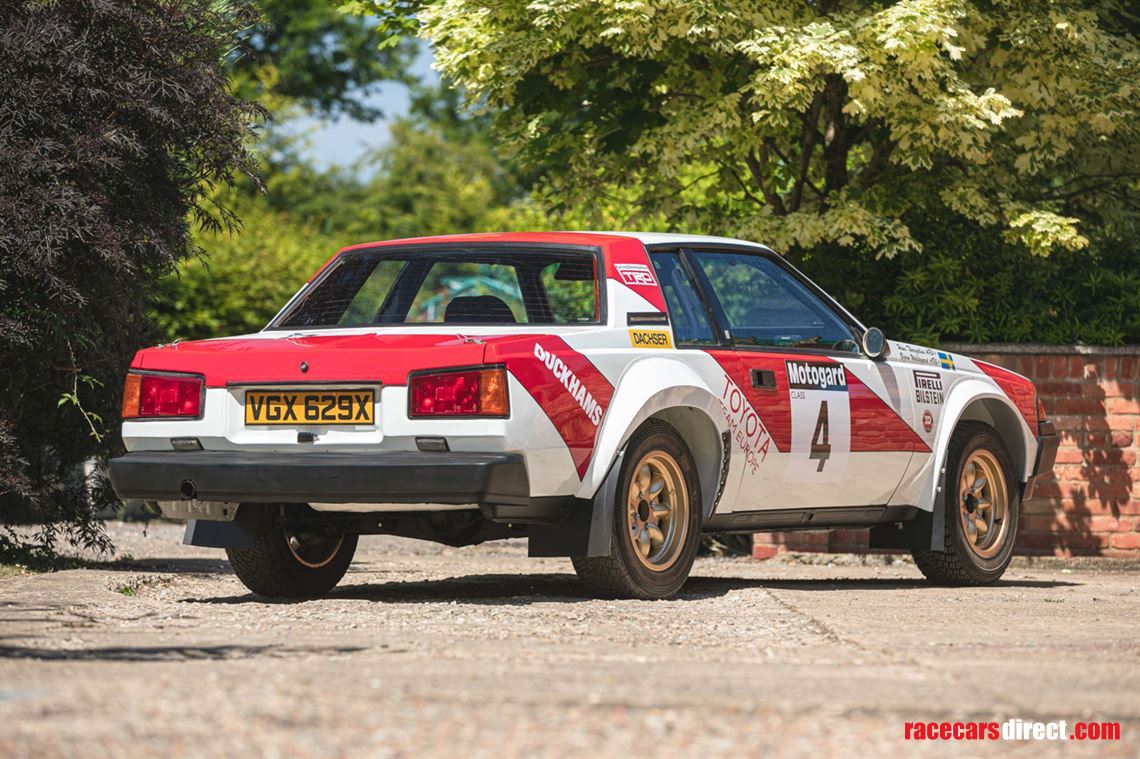 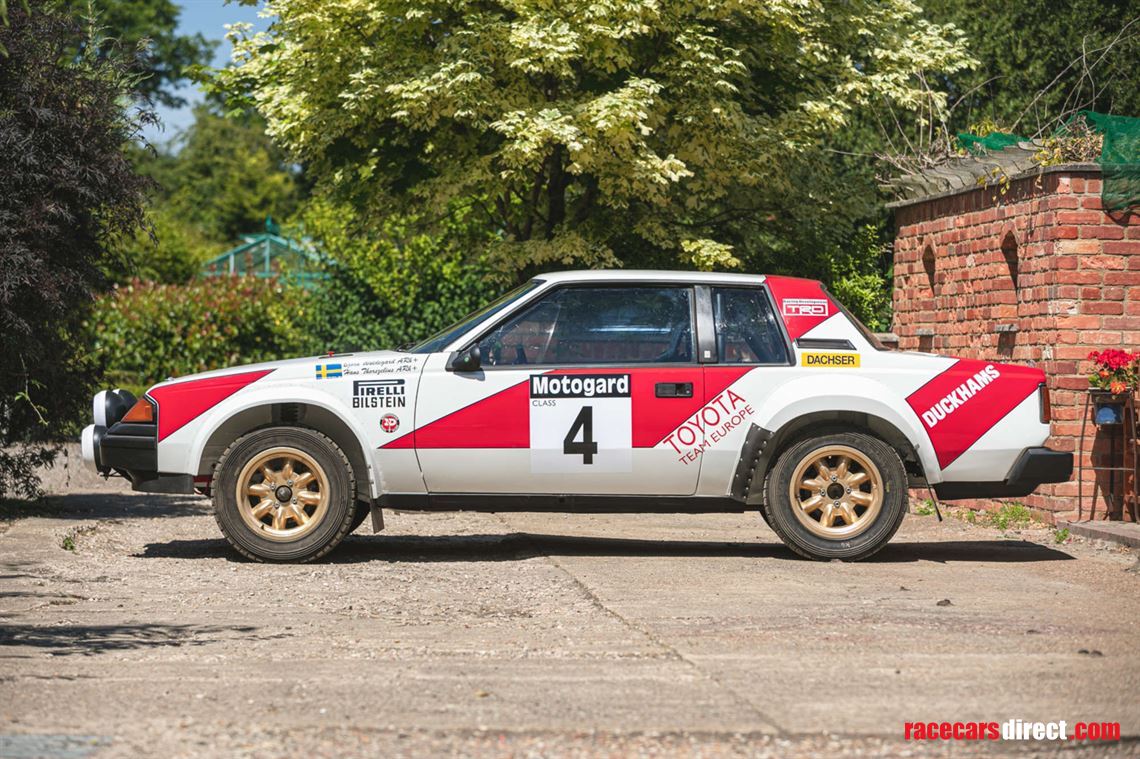 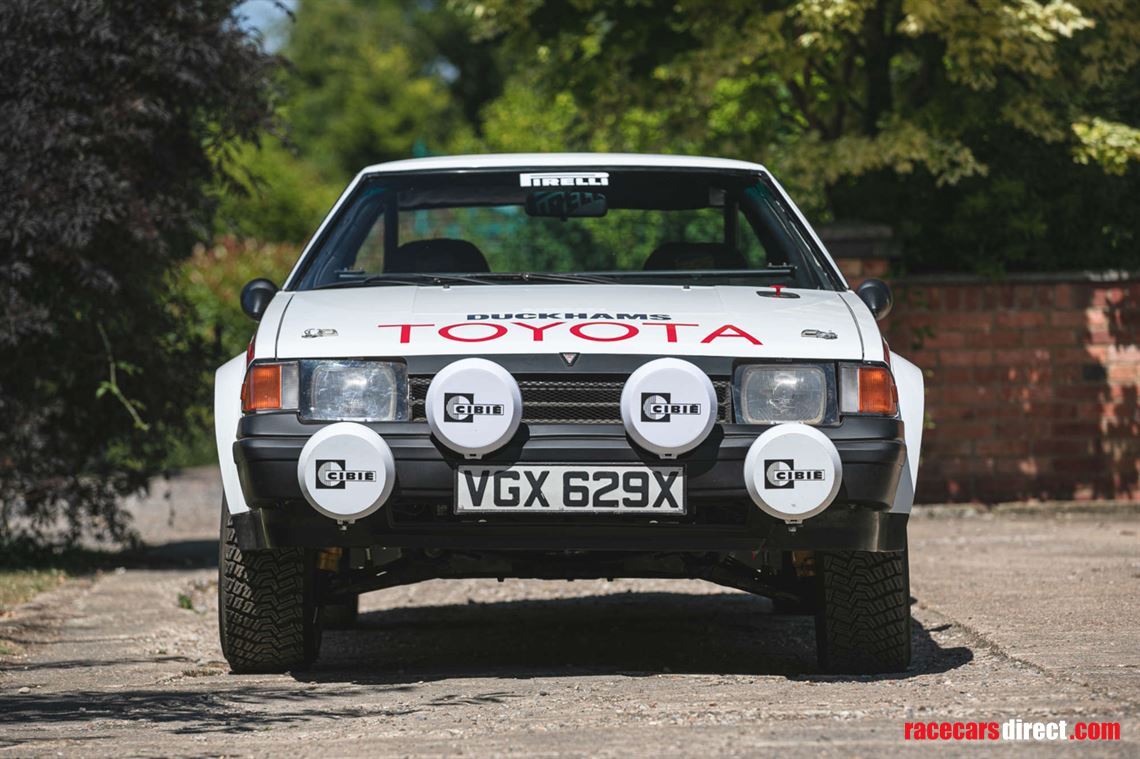 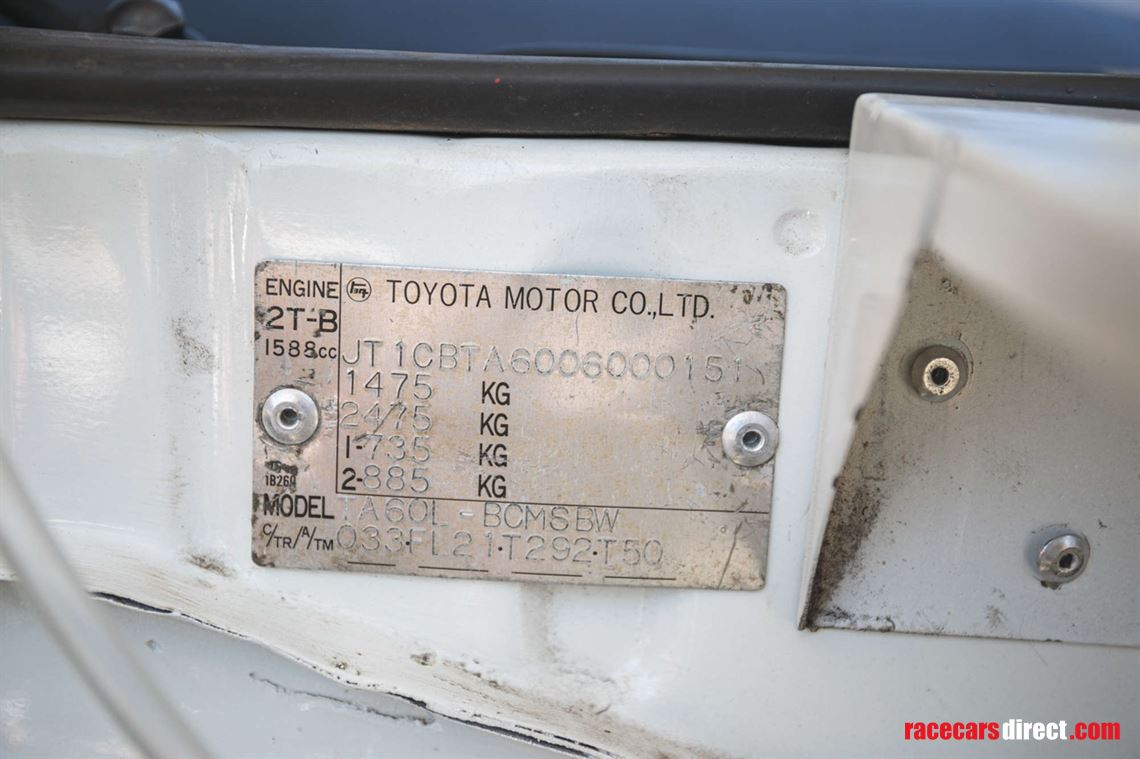 To be offered by Silverstone Auctions at the Silverstone Classic Sale taking place on August 27th. To find out more and to arrange to come and see the car at the event please call Nick Whale on 01926 691 141.

During the Eighties, the World Rally Championship activities of Toyota Team Europe (TTE) continued to be as selective as they had been in the previous decade. The team’s calendar was largely dependent on national marketing requirements, plus the suitability of each event to the RA40 Celica 2000 GT that the team was campaigning in the top Group 4 category.

At WRC level, there was little that Toyota could do to become immediately competitive on the global scene. Patience was necessary because, behind the scenes, an all-new turbocharged Toyota Celica was being developed by TTE at its new base in Cologne, Germany, ready for homologation and a planned launch in 1983.

However, with the new car still some way off, Toyota’s fortunes had begun to change when two examples of the new third-generation RA63 Celica 2000GT shocked the rallying fraternity by delivering an impressive result in the Group 4 class of the 1982 South Swedish Rally. Still naturally-aspirated, the coupés finished in second and third place overall in the hands of local drivers Leif Asterhag and Björn Waldegård. A little over a month later, a further development of the RA63 Celica was applied in time for the 1982 Motogard Rally of New Zealand. Though not immediately obvious from an external perspective, TTE had shifted the engine and powertrain slightly further back within the chassis of the two cars, thereby dramatically improving their traction.

The Motogard Rally was not a happy event for some – Lancia failed to enter, Opel only sent one car and both Audi models experienced mechanical issues which put them out of contention – but drivers Björn Waldegård and Per Eklund put in a resounding one-two finish that marked an important historic victory for Toyota. The Celica had been campaigning in world rallying for ten years, yet this event in New Zealand was the first WRC win for the hard-working model.

And that winning car is here today.

Our articulate vendor has very kindly sent us an email describing his time with the Celica and we think it’s altogether more personal if we quote from it here.

The car was built in late 1981 at TTE (Toyota Team Europe) in Germany and rallied in the WRC during 1982. It was then sold some time later to the Al Kharusi brothers in Muscat Oman who rallied it for a few years. They subsequently sold it to the previous recorded keeper to me who carried on rallying it in the Middle East until bringing it to the UK in 1991. He then rallied it here until it retired from the Kent rally in the October of 1991. A little later bestowed it to his friend and moved to America. It sat in his garage until 2009 when I purchased it. I also went out and bought two standard road cars for spare panels and parts. I still have one that will be free to the new owner along with many original works factory parts including suspension, steering, brakes, a gearbox, the original Kevlar sump guard plus other spares.

I then went about stripping the car down to a bare shell, had it sand blasted and rectified any corrosion (which wasn't a lot) but without hiding any of the rallying history to the underneath apart from replacing the outer sill panels, the very lower rear quarter panels and spare wheel well.  The two New Zealand cars had the engine and drive train set further and lower back and its clear to see where this was on the gearbox tunnel, bulkhead and the engine sump in relation to the steering rack.  I then had new wheel arches made by a specialist and replaced all the bolt on panels and doors. Resprayed it in its original livery and then reassembled it.  Importantly I have a couple of photos showing its original colours underneath as I sanded an area down on the back wing plus many other pictures before stripping it down which is how I can be sure it's an original factory shell. There are not many 40-year-old works rally cars you can say that about!!

Also, at this time I contacted TTE in Germany about my car and left them the chassis number. The next morning, I had a call from a really nice chap called John Day to discuss it and he was quite surprised to hear of the car because it had been off the radar for so long. He told me TC2 and TC3 had done the NZ rally and Bjorn had driven TC3. He also told me that SS at the start of the engine number stood for Super Swede who was the Swedish engine builder. I then took and sent him many photos at various different angles of the car and technical parts along with engine and gearbox numbers in between various phone calls asking for different angles. This went on for a week or so until then I heard nothing for a couple of weeks until I received via air mail a certificate of origin showing my car as TC3. At this point I realised it to be the first Celica in the world to win a WRC event. It wasn't until a while later that I noticed TC3 stamped on various parts including a welded in part of the shell.

I also have other photographic evidence which makes me believe it also did the RAC rally the same year.

The next year I met Bjorn Waldegard and Ernst Kopp (the other signatory on the certificate of origin to John Day from TTE) at Goodwood Festival of Speed and spoke with them about the car and how they remembered when they were building the cars that Ove Anderson who was in charge at the time, was so obsessed with keeping the weight of the cars to a minimum that he made the mechanics sand down all the panels trying to make them paper thin.  We had a chat for a while and then Bjorn kindly signed a few photos of the car which will go with the car as well as a couple of magazines from the period and a Toyota Rally brochure.  These are all the facts as I understand them and am happy to answer any other questions that may arise."

As the first Celica in the world to win a WRC event, TC3 is an important part of Toyota and World Rallying history. Sensitively restored by our vendor, it's now ready to be used as its next owner sees fit, as part of a collection, car club rallies, Goodwood Festival of Speed, 'Group 4' events or simply to be enjoyed as a road car. Your earliest inspection is welcomed and encouraged to fully appreciate this very special Celica.

Dedicated to Japanese and other Asian brands

The first ground effect prototype that foreshadowed the advent of Group C. Eligible for LMC