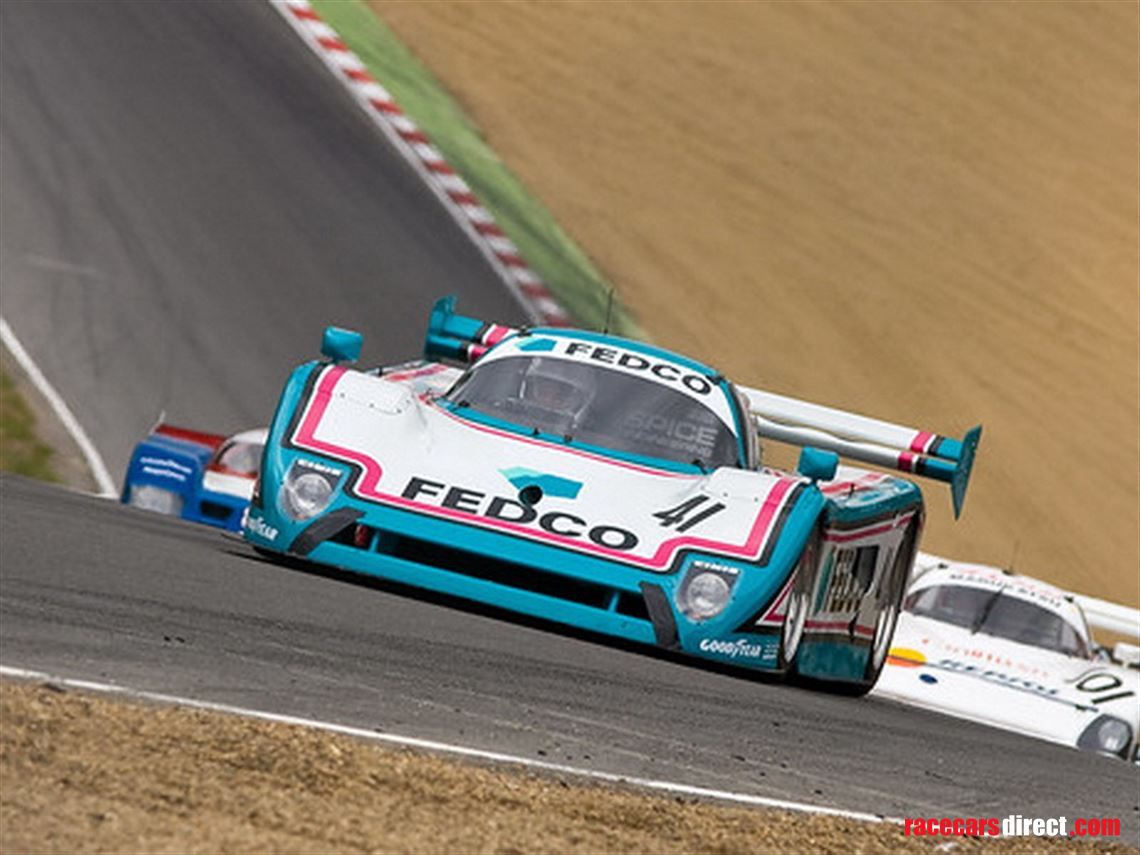 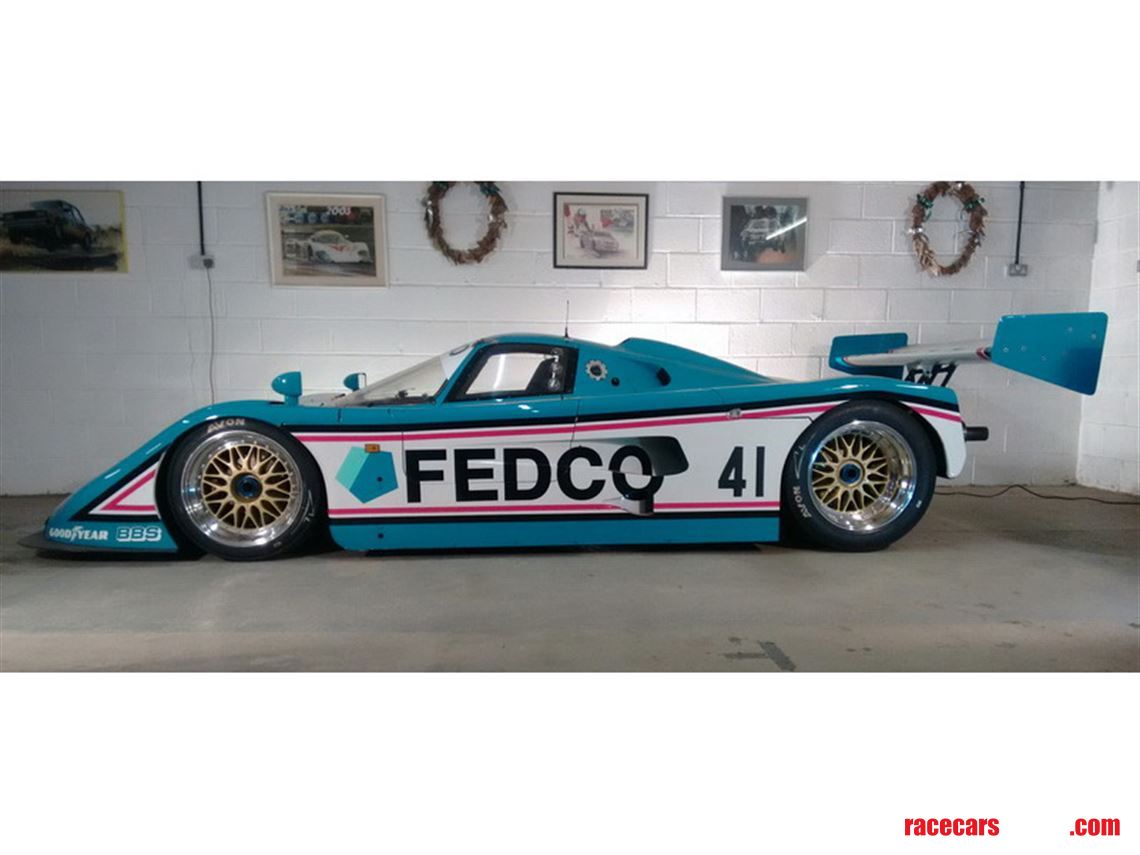 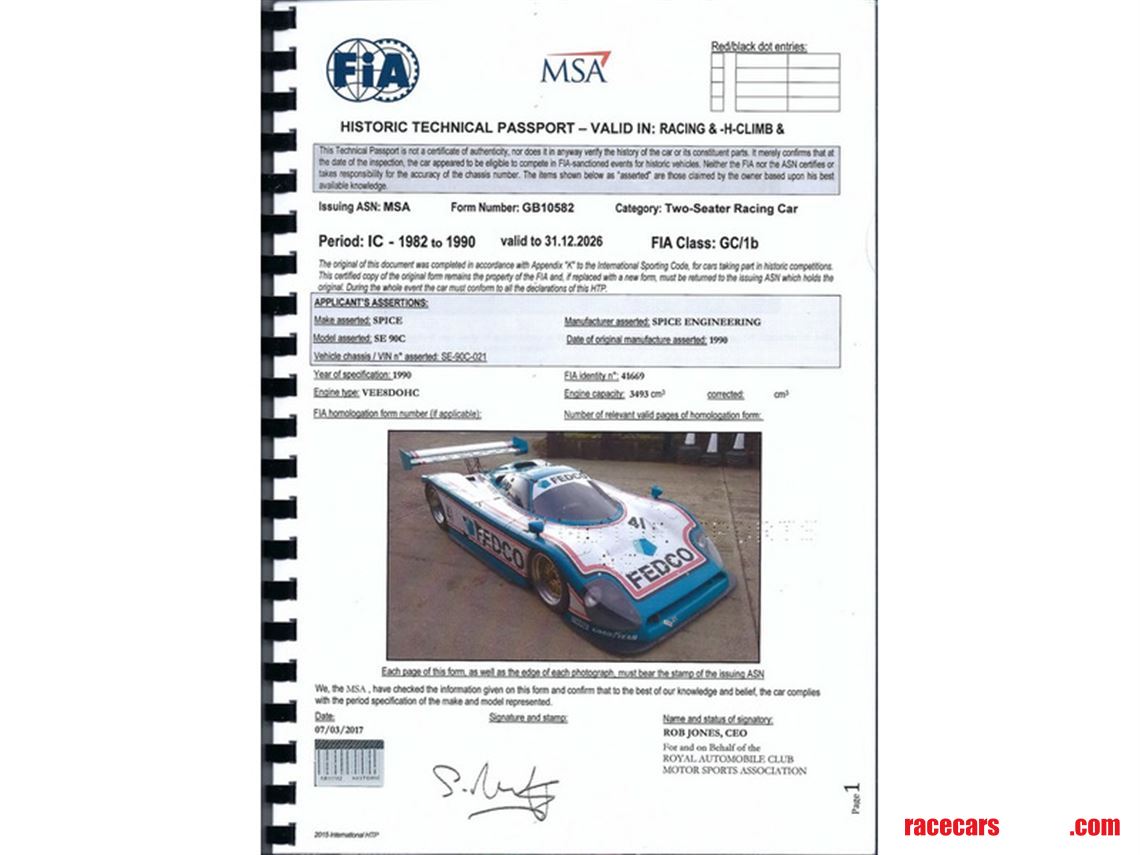 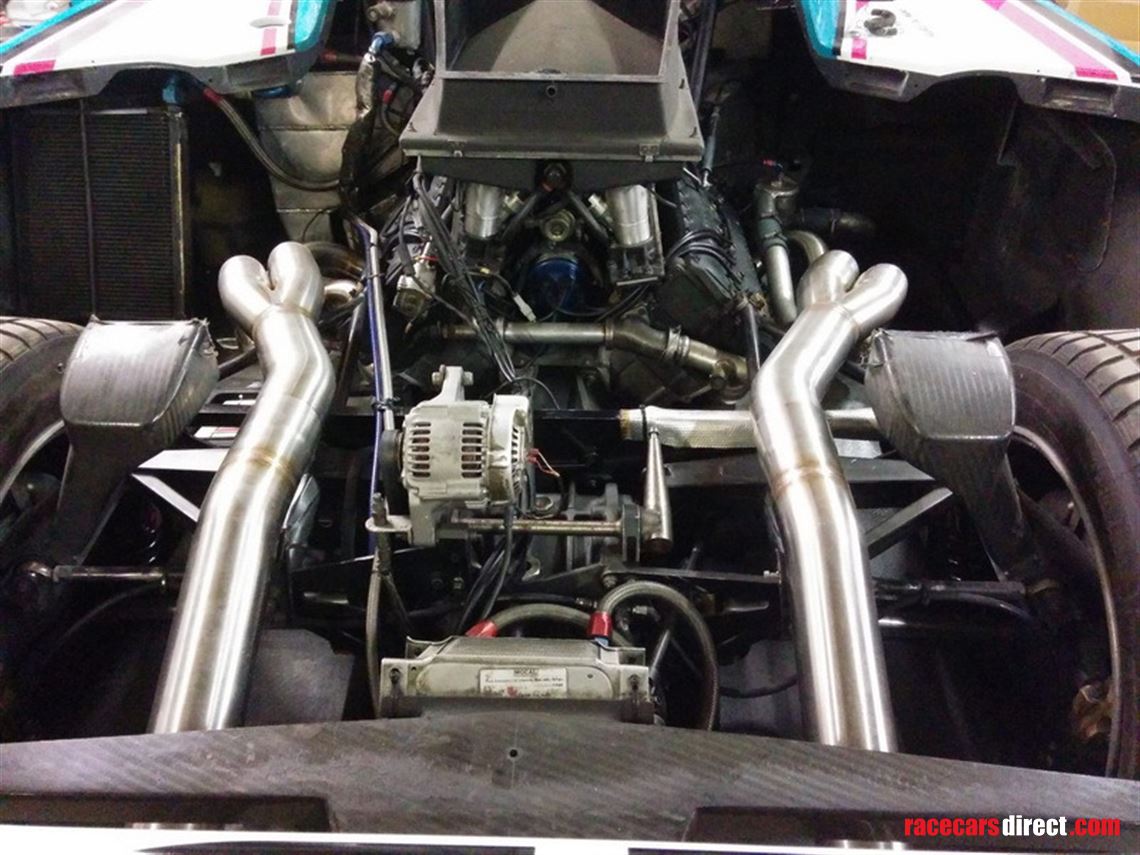 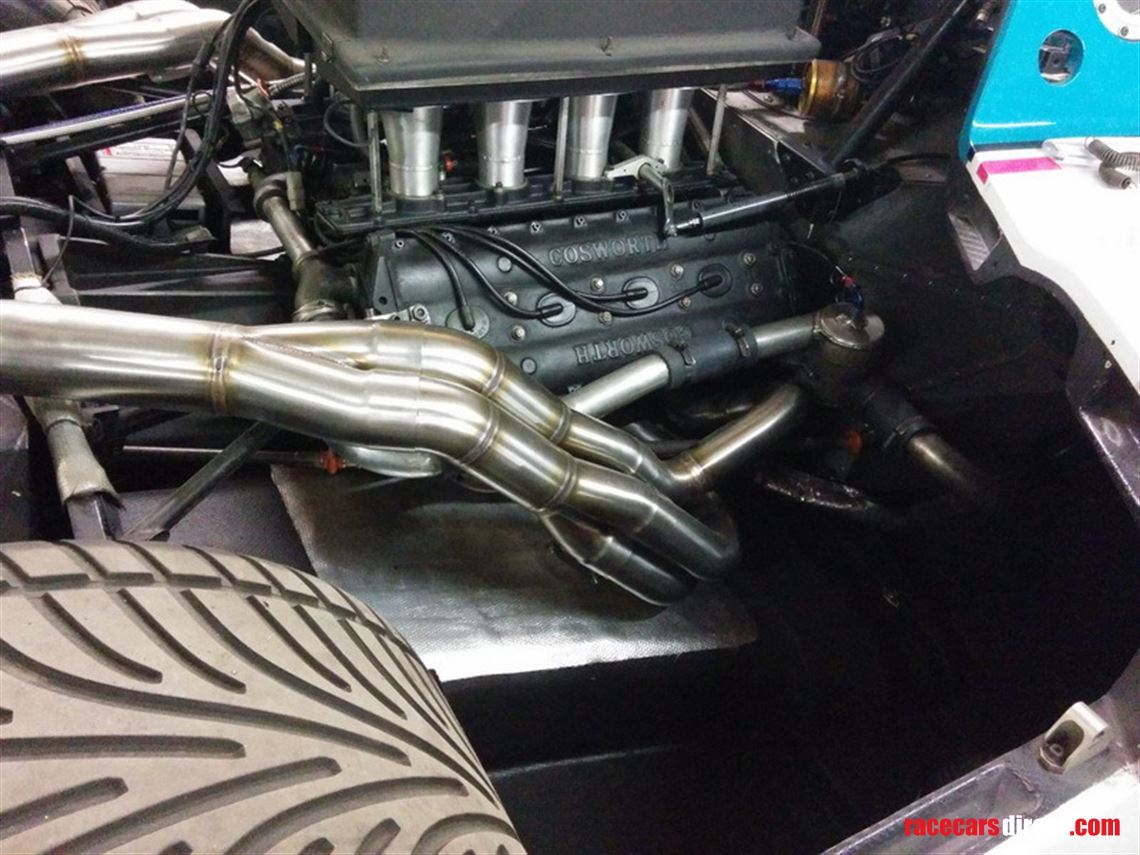 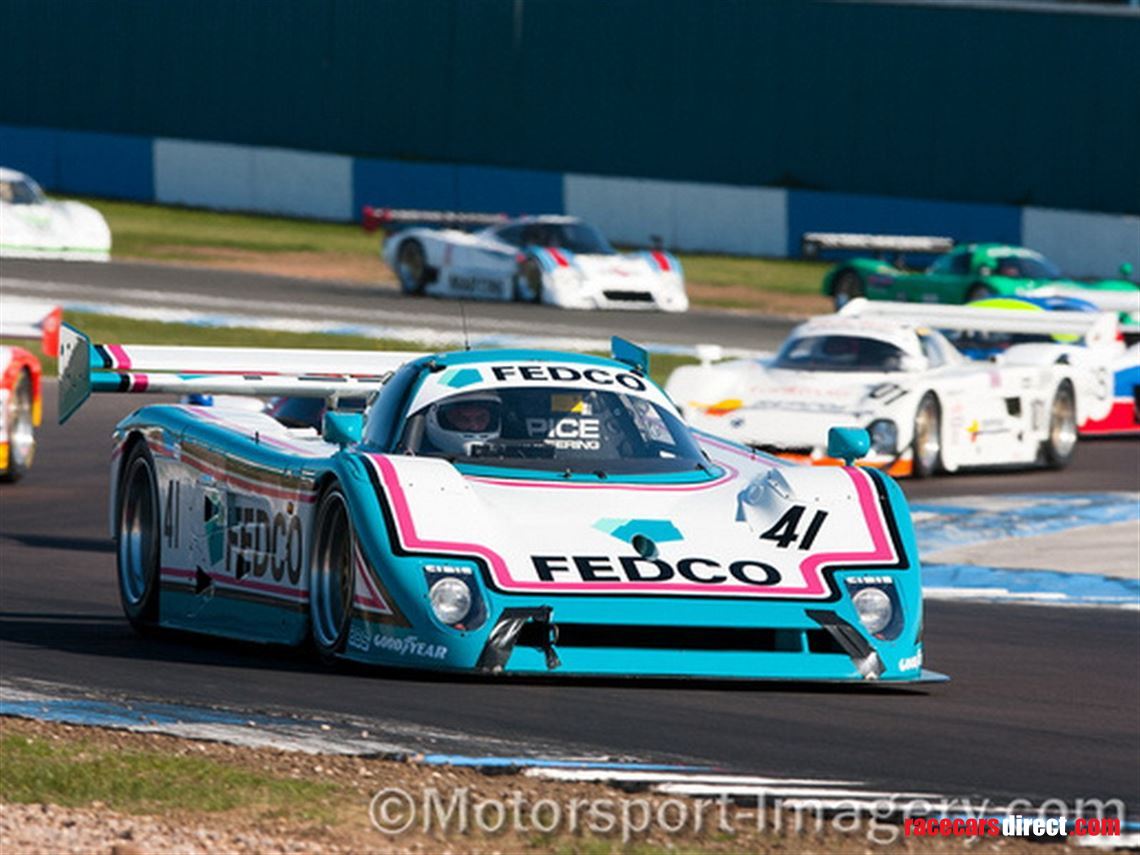 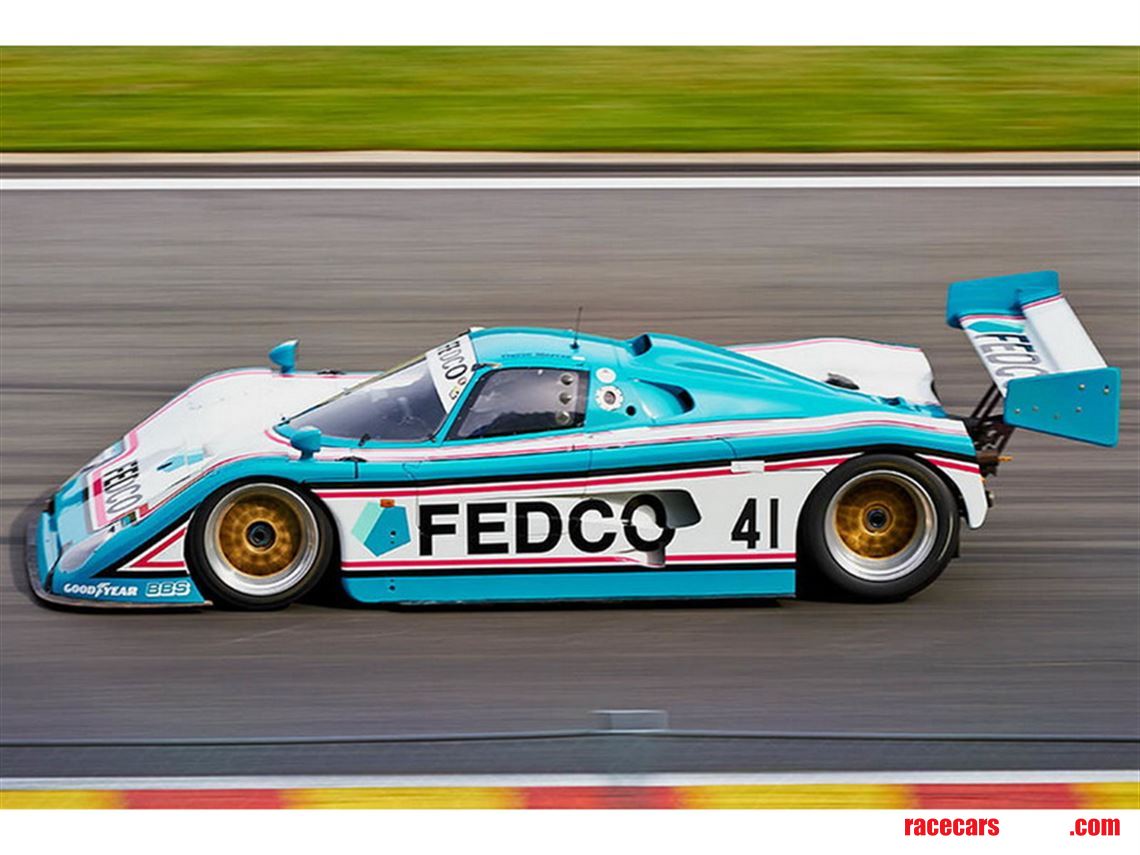 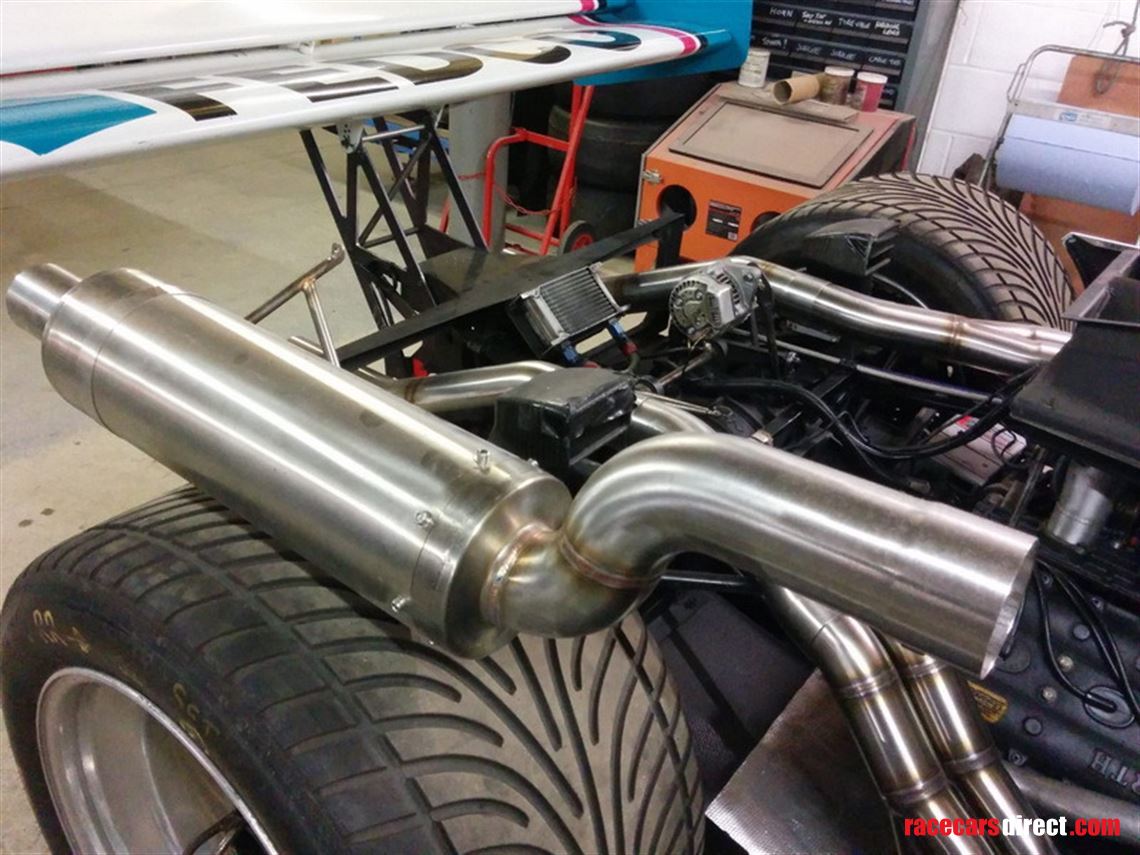 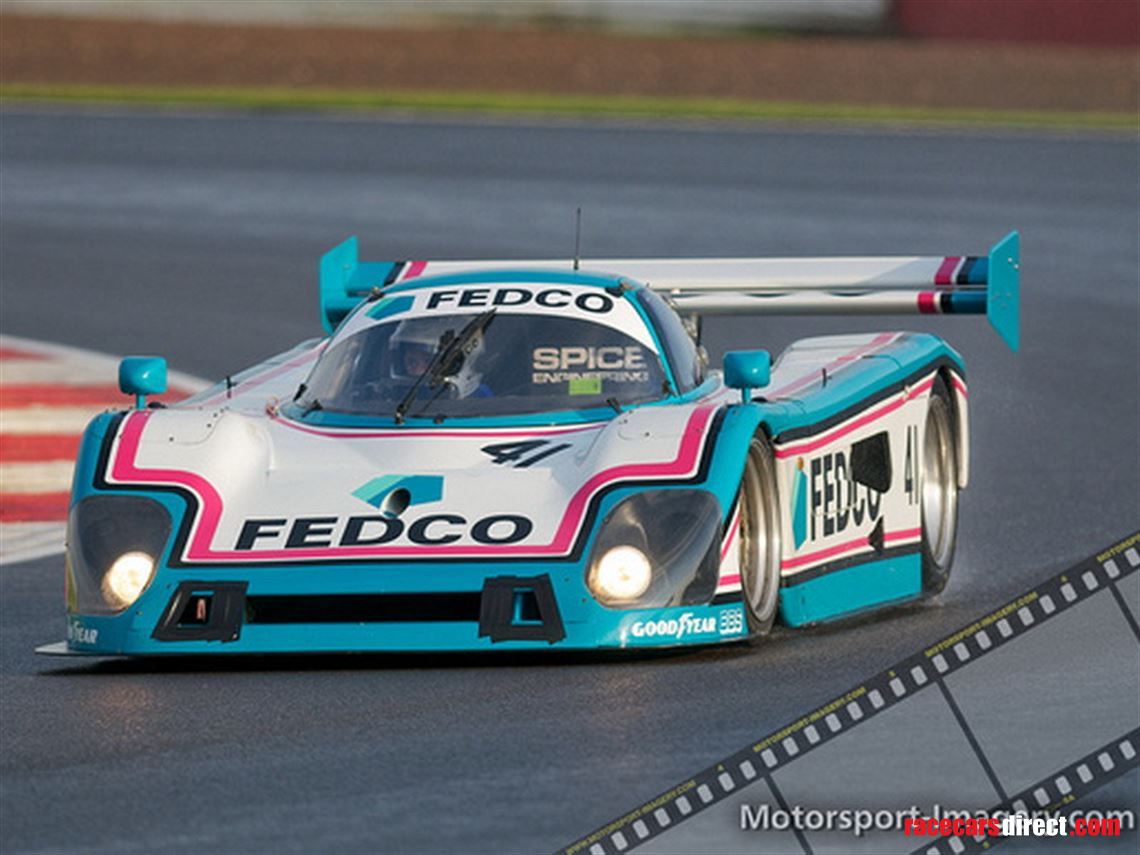 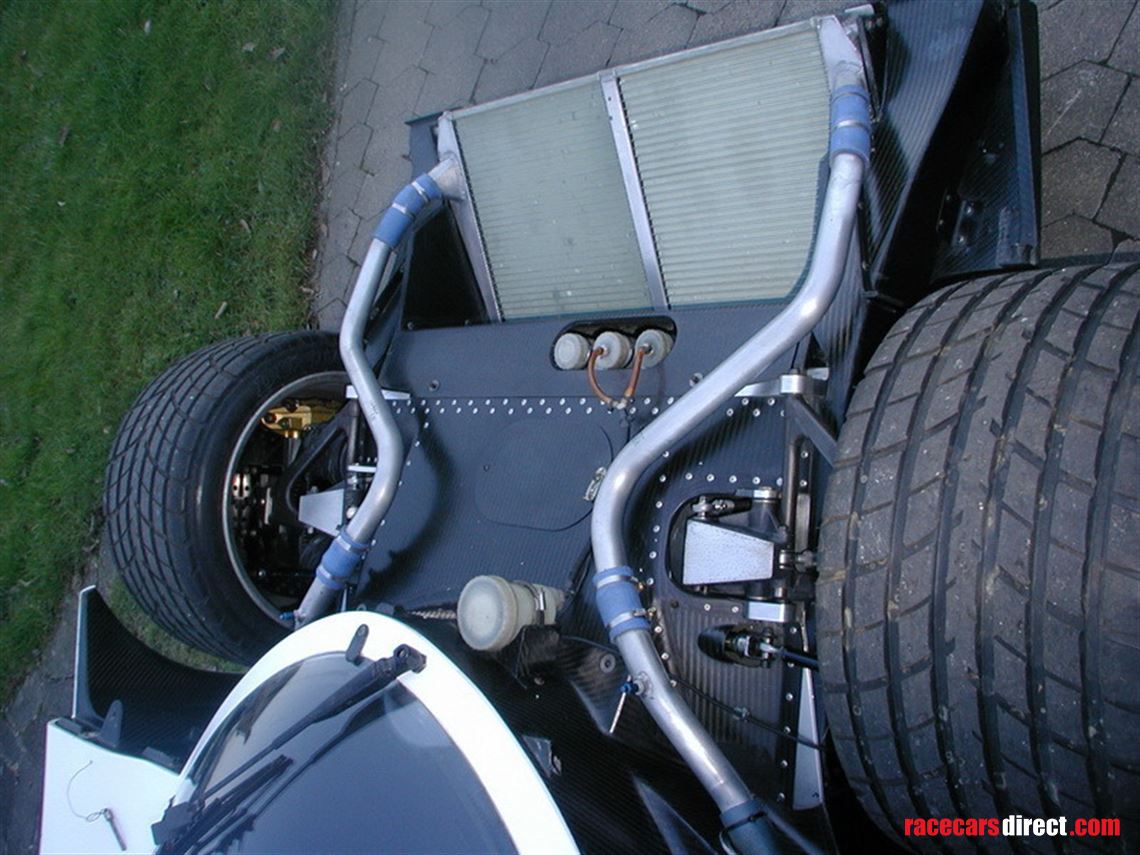 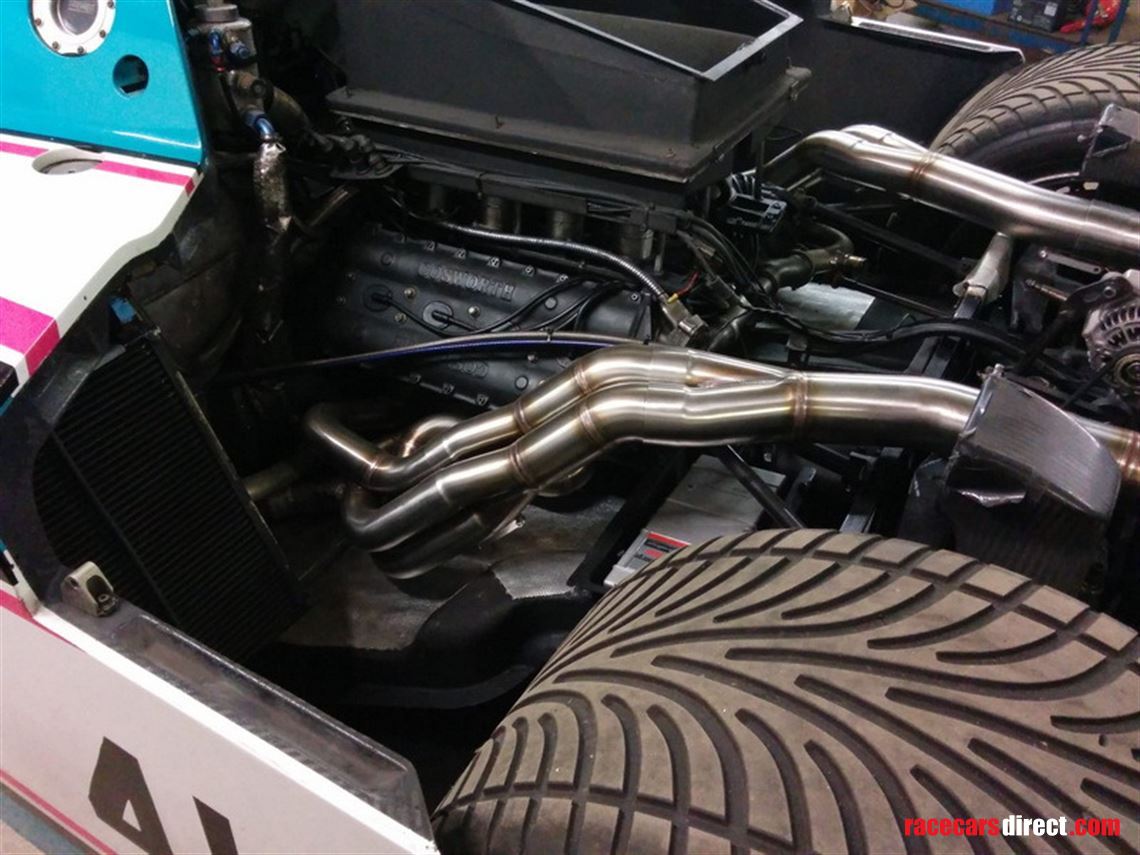 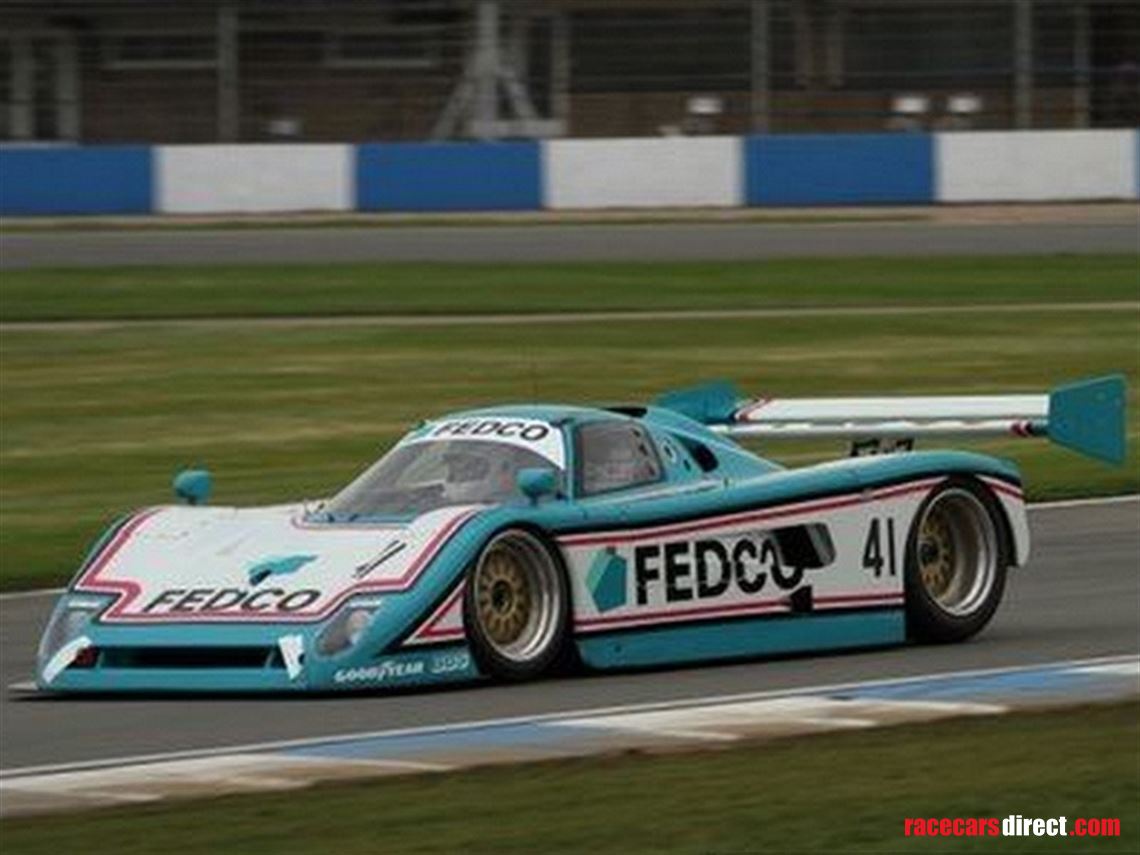 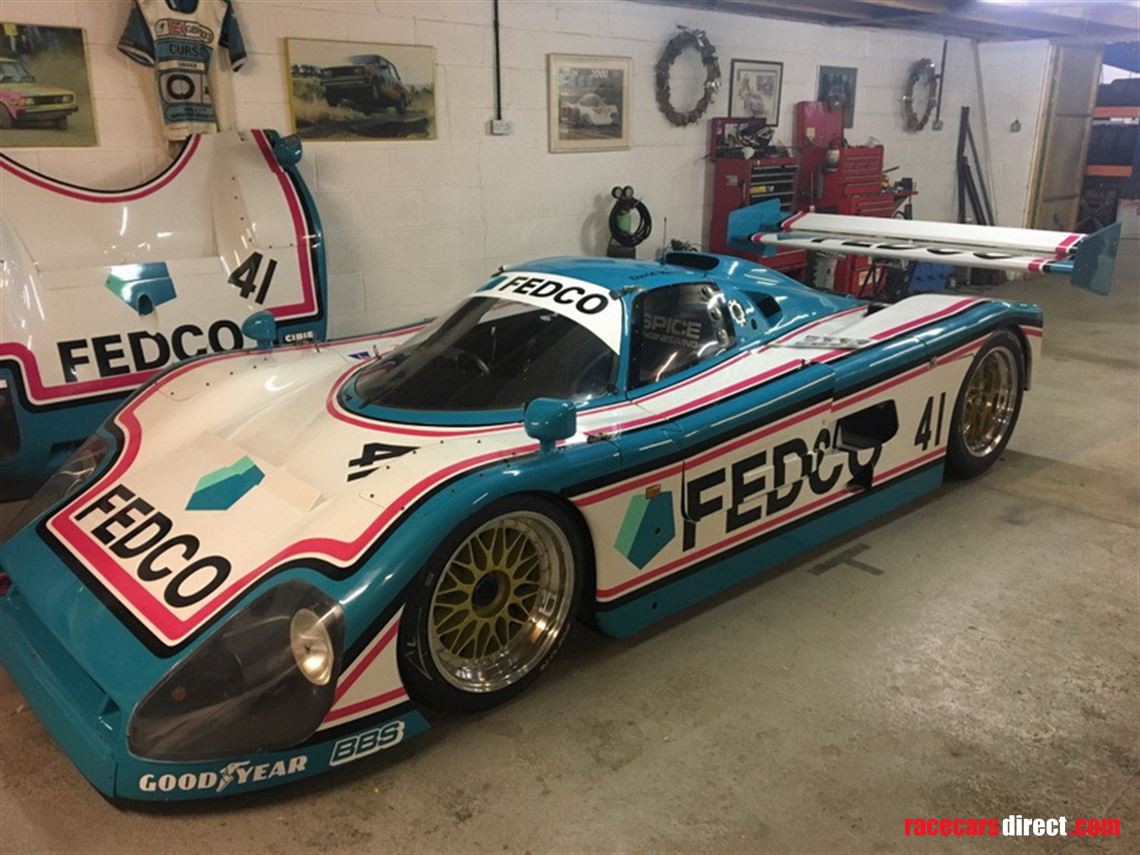 We are delighted to offer the 1991 Le Mans 24 hours C1 Class winning "Fedco" Spice for sale.

Already an accomplished and hugely successful driver, Gordon Spice – together with his partner/racer Ray Bellm - established Spice Engineering in the early 1980s. Initially, the Silverstone based company focused on preparing and developing existing sports racers. Ahead of the 1986 season, however, Spice was tasked by Geneva Motors with the construction of a new Pontiac IMSA GTP racer. In addition to the cars headed Stateside, Spice also fielded Group C2 variants in the World Championship with great success.

For the 1988 season Spice introduced the SE88, a second generation prototype racer which could be used on both sides of the Atlantic, as a Group C, Group C2, GTP or GTP Lights depending on the engine fitted. In the World Sports Car Championship, the SE88C carried on where the earlier SE86C and SE87C had left off. The works cars, one of which was piloted by Gordon Spice himself and Ray Bellm, absolutely dominated the Group C2 class. The Cosworth-engined Spice won 10 of the 11 rounds, including a class win in the 24 Hours of Le Mans for Spice, Bellm and Pierre de Thoisy. At the end of the year, Spice and Bellm were World Champions, which was Spice's fourth consecutive drivers' title in the Group C2 class.

A change in the Group C regulations, which included a low minimum weight for naturally aspirated 3.5-litre engined cars, made the larger C1 class a viable option for Spice from 1989 onwards with the SE89. This would be replaced by the successful SE90 the following year. The SE90C (for World Championship Group C) and the SE90P (IMSA/GTP) were one of the most successful and most beautiful Spices which were bought by many privateers winning various championships around the world.

Our car, Spice chassis SE90C-021, was shipped in late 1990 to the Japanese Fedco team for the 1991 season where it was entered in the Fuji 500km race taking place on March 10th but the car arrived too late to participate. It was then entered for the Fuji 1000km which took place two months later but failed to finish after which it was immediately flown back to Europe for the 1991 Le Mans 24hrs where it would be driven by the Japanese drivers Nagasaka/Yokoshima/Misaki of the Fedco Team with support from the Spice “semi-works” Euro Racing Team. The 1991 edition of the Le Mans 24hr was quite a memorable edition with only 12 cars finishing and Spice SE90C-021 winning the C1 class being the sole survivor after 24 hours racing.

After its Le Mans victory, the car went back to Japan where it raced only one month later at the Fuji 500km where it finished a credible 7th overall. This was the last race of SE90C-021 which was put aside for several years until it was brought back to Europe where it was bought by its current long-term UK-owner in late 2003.

A full rebuild was then carried out by Alan Howell of Weylock Racing after which 021 started its historic Group C/GTP racing career in 2004 and achieved multiple race wins, fastest laps and multiple lap records since. After an intermezzo of a few years, SE90C-021 was fully rebuilt again by preparer Pete Gretton in 2016 after which it did a few test days, the last one being in April 2017 and it has not been raced or used since. As such, the car will need some recommissioning (including crack test and fuel cell) but is mechanically on-the-button although we would recommend a refresh of its Cosworth 3.5 liter DFR engine. The 5-speed gearbox has only done 3 test days since a full rebuild with new CWP and the car was subject to a full body off rebuild with new bag tank, crack test etc in 2016 and only has run the 3 test days since.

SE90C-021 is well documented including an FIA HTP valid until 2026 and comes with an extensive spares package including wheel sets, bodywork, gear-ratios, crash-box, suspension parts, etc.. There is also an optional spare DFR engine and gearbox.

This is a rare opportunity to acquire the only Le Mans 24hr C1 Class winning Spice which should give its new owner lots of pleasure in the Group C races around the world where the “Fedco” Spice will once again be a welcome and competitive entry.

Race Mechanic's for VW for the Track Attack