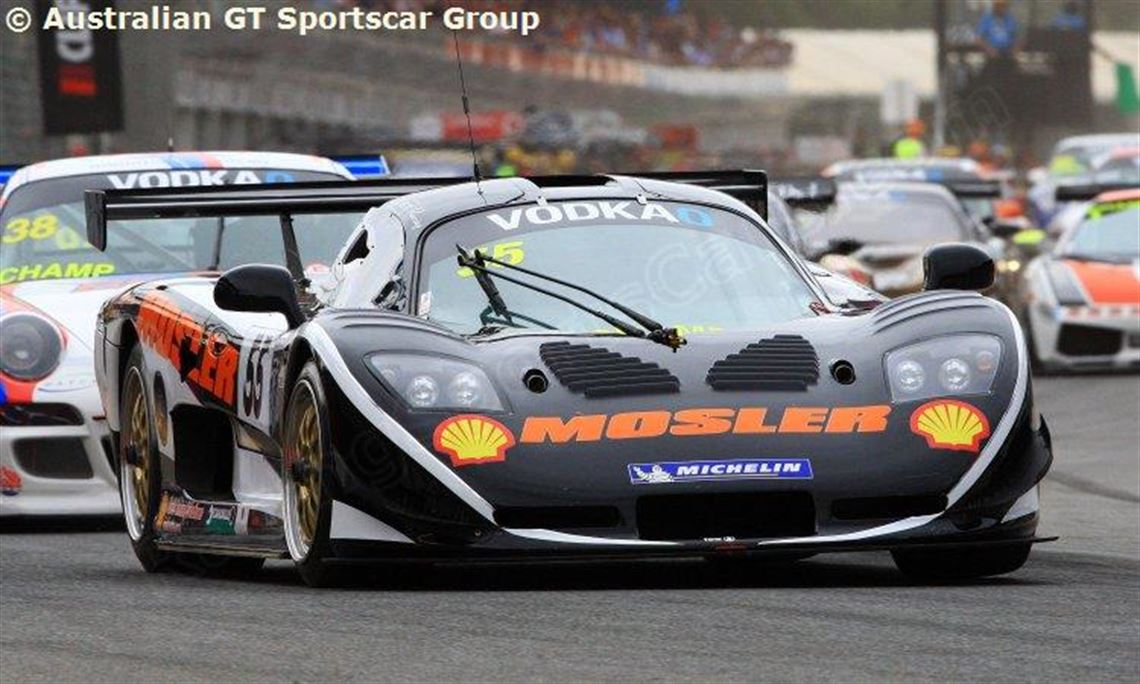 NOW IN THE UK AND READY FOR SALE

Manufactured in St.Ives, Cambridgeshire by Mosler Europe Ltd, the Mosler GT3 was a formidable weapon. So formidable that the 'manufacturers' attempted to outlaw the car. The Mosler first appeared as a road, and race car in 1999, the child of a collaboration between Warren Mosler, entrepreneur, financial genius and car manufacturing addict, and design guru Rod Trenne, who was a master in the Unigraphics CAD of the day. The result was the Mosler( Mosler Trenne MT) 900. On pole at Daytona 24 in its class in 1999, and launched on the road, it broke records for road car lateral g, acceleration, braking, lap times, and in particluar safety, exceeding the Federal crash tests requirements by massive margins.

In 2002 Martin Short of Rollcentre Racing became aware of Mosler, and he and his later-to-be son in law Luke Kendall, jumped on a plane 2 days later and surveyed their very first Mosler in the back of a race trailer at Road Atlanta. A few days later they were at the Mosler factory in Riviera Beach in Florida and struck a deal with Warren Mosler to buy a part assembled race car, and ship it to the UK, and distribute them in Europe from there.

Within weeks of the car arriving at Rollcentre, the car and the crew went to Bathurst and finished an astounding 2nd overall in the inaugural Bathurst 24 Hours.

The relationship was sealed and Mosler Europe Ltd was formed, and soon race cars were being part built in Florida, and then finished in St.Ives.

Balfe Motorsport became the first Mosler customer in 2003, and Rollcentre and Balfe battled fiercely in the 2003 British GT Championship, with Rollcentre winning the 1000kms very first ELMS race (in the BGT class) in Spa, and finally the BGT Championship at the final race at Brands.

Mosler Europe Ltd then decided to build the GT3 variant. This car featured the Chevrolet LS7, uprated suspension, paddle shift, Motec, Traction Control, Power Steering, and the car was displayed in Germany at the Performance Industry Show in Germany. Martin Short took 12 orders. Unfortunately, the manufacturers got wind of this, and despite Stephane Ratel saying that if 3 Moslers came to the grid, they would be accepted, it all changed...... The manufacturers made sure the Mosler wouldn't be allowed in by getting the FIA to modify the rules to limit car acceptance by insisting that 300 cars per year were built.

This action sounded the death knell of many small race car manufacturers as the only place to sell GT race cars for profitable money was going to be in GT3.

Rollcentre persisted in British GT, but were protested out whilst leading the championship by the team that went on to win the championship with.....an Ascari, that made fewer cars than Mosler, but by virtue of the fact that they had been there in the previous year, were grandfathered in. The protest was based on a technicality in the eligibility rules, and resulted in a rule change, with Nationally Homologated cars then being eligible, rather than just FIA Homologated. So Moslers raced on.

Balfe Motorsport blazed the way with Moslers in Spanish GT, winning the championship, and in the FIA GT Championship, racing their original 5.7 litre car in the G2 class (for non homologated GT2 spec cars).

And so we come to this car, chassis 0802. Warren Mosler was approached by Go To One, a German race team, allied with Charouz Racing. They wanted 2 cars to race in the FIA series. 0802 was one of those cars. The deal was to lease the cars, and they raced at Silverstone, Monza and Oschersleben, with 2 x first places in G2.

The Moslers were running stock engines, producing 560 bhp, breathing through 30mm restrictors, and they were racing against effectively GT1 cars, with full house race engines designed for restrictor racing. So the pace overall wasn't adequate to challenge the non G2 cars, but in class they fared well.

Unfortunately financial constraints hit the team, and both cars were reclaimed by Mosler Europe and returned to base. The cars were then rebuilt to as new condition.

Chassis 0802, this car, was then bought, with one other, by Aussie John Teulan. He took both cars back to Australia, and entered one car for himself, and 0802 for Aussie race legend Craig Baird in the Clipsall 500, supporting the Australian Touring cars.

Craig absolutely destroyed the field, and yet again, Moslers were subsequently the recipient of huge ballast additions, and tiny air restrictors!

However, the dominance of the Moslers was obvious to any driver that watched or drove it, and to any race engineer that saw how it was built, with the best of materials, and equipment. And many sales followed, all over the world, from the UK, to Spain, Germany, The Netherlands, Italy, Malaysia and of course Australia.

But, there is no doubt, that the Mosler was way ahead of its time. The car was likened to a group C car (it was nothing of the sort), it was Warren Moslers vision of a race car that didn't cost the earth, was reliable, fast and safe, and easy to maintain.

Martin Short located chassis 0802 in Australia, and it was still owned by the Teulan family, but now by Johns wife Lyn, as John had sadly passed . The car did only the one race, which it won, and then was kept in an air conditioned garage, started regularly, and kept in immaculate condition in the Teulan workshop in Brisbane.

0802 is now available for sale as is. It will need fuel tanks, seat belts, fire extinginguisher and recommisioning which can be done by Luke Kendall at Kendall Developments, working from the Rollcentre / Mosler Europe workshop, still located in St.Ives, or by a preparer of your choice, with Luke's assistance and advice if wanted. All parts are still available for the car, and Luke can assist any buyer to make sure they are supplied, and indeed the car is put into the best performance window.

Renowned driver and race car preparer Aaron Scott of ScottSpeed has recently recommisioned two Moslers, a GT3 and also the Dytona 24 Hours winner of 2003. The GT3 won on its first time out, in class at Donington in the Masters Endurance Legends.

The Mosler is a worthy addition to both the Masters and the Patrick Peter Series, and Classic le Mans and the Silverstone Classic are events that can both be competed at with this car.

A most eligible pre-A 356 with multiple previous entries at Goodwood and Le Mans Classic.