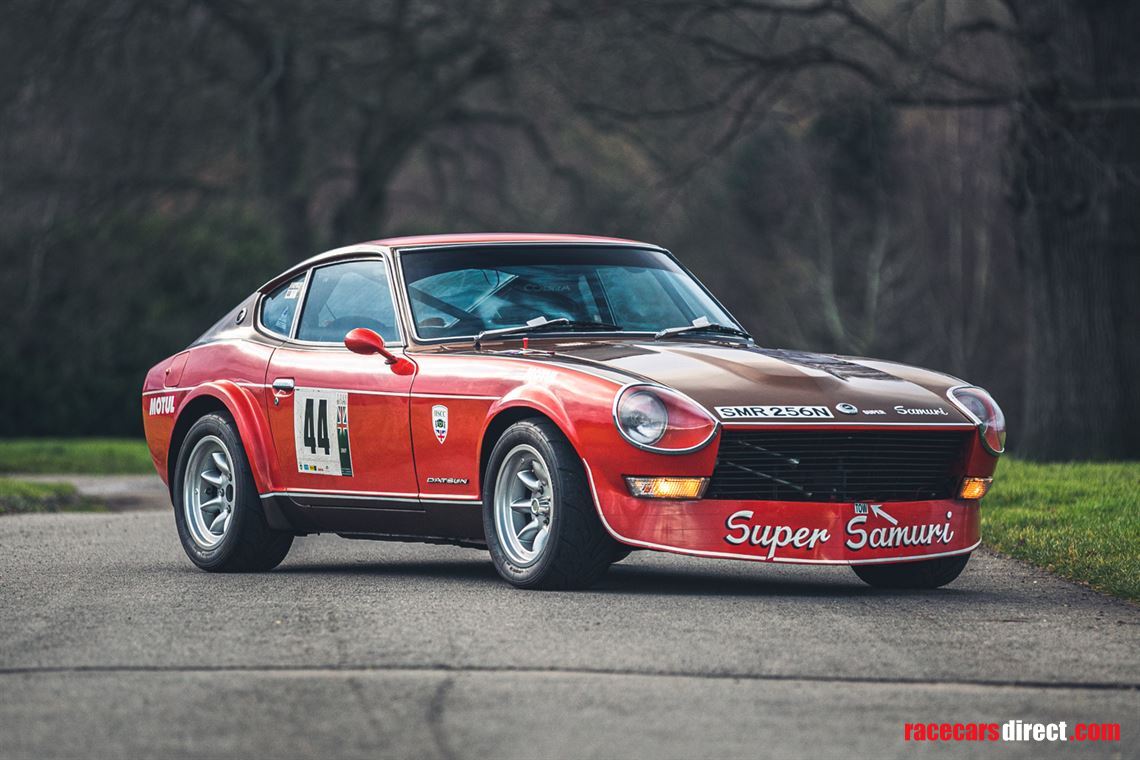 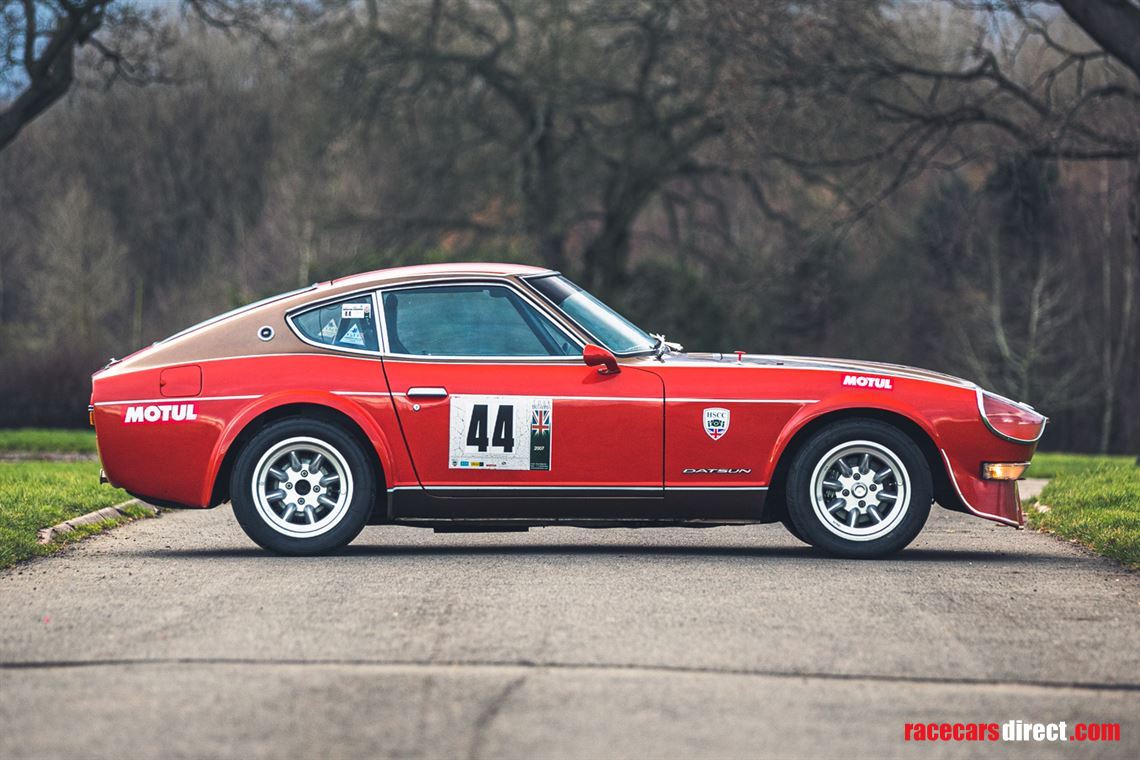 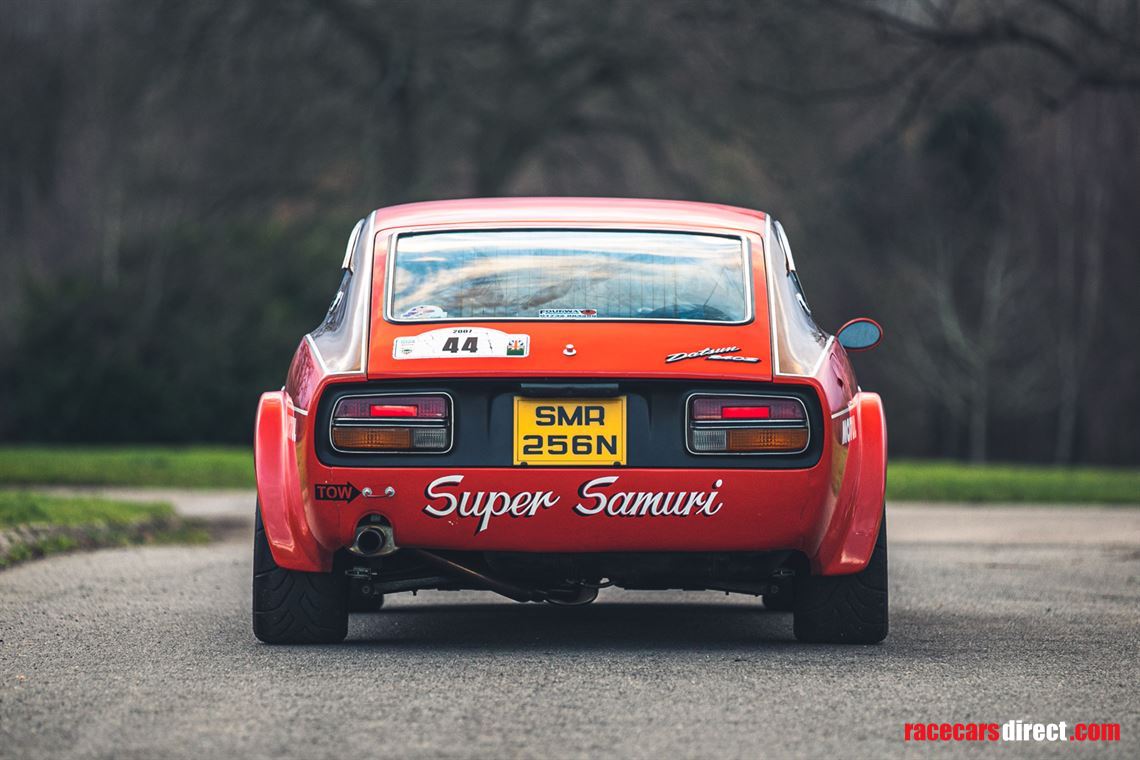 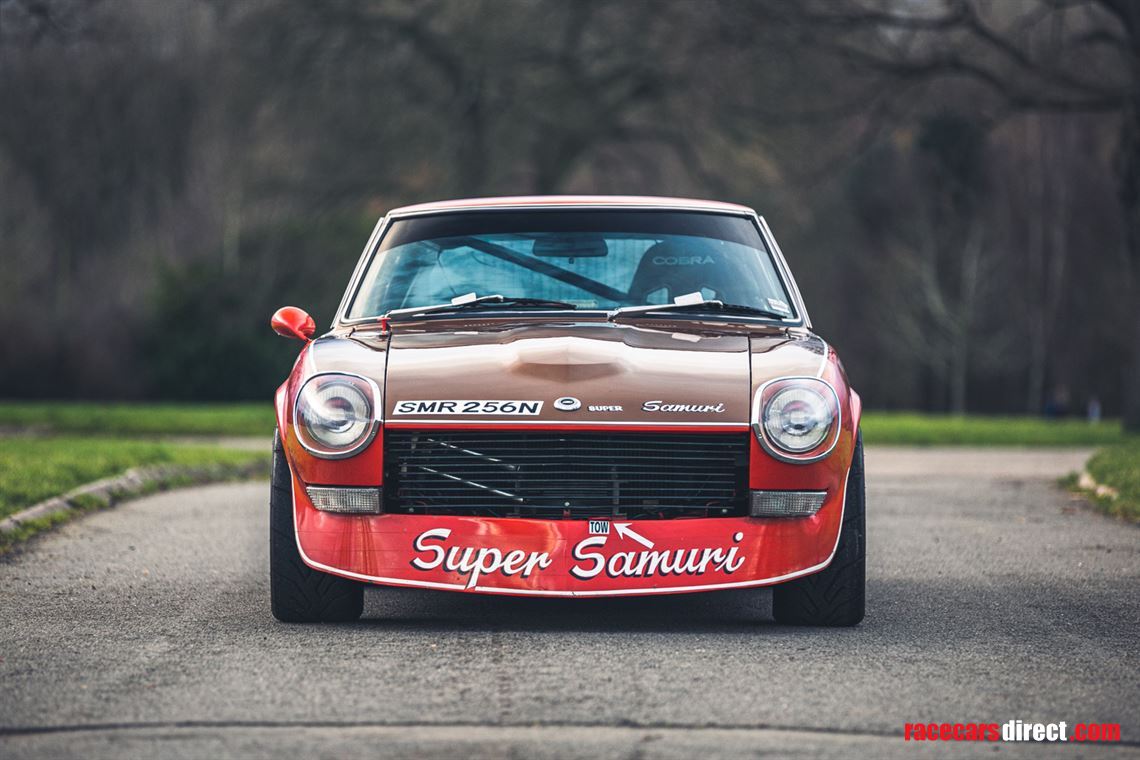 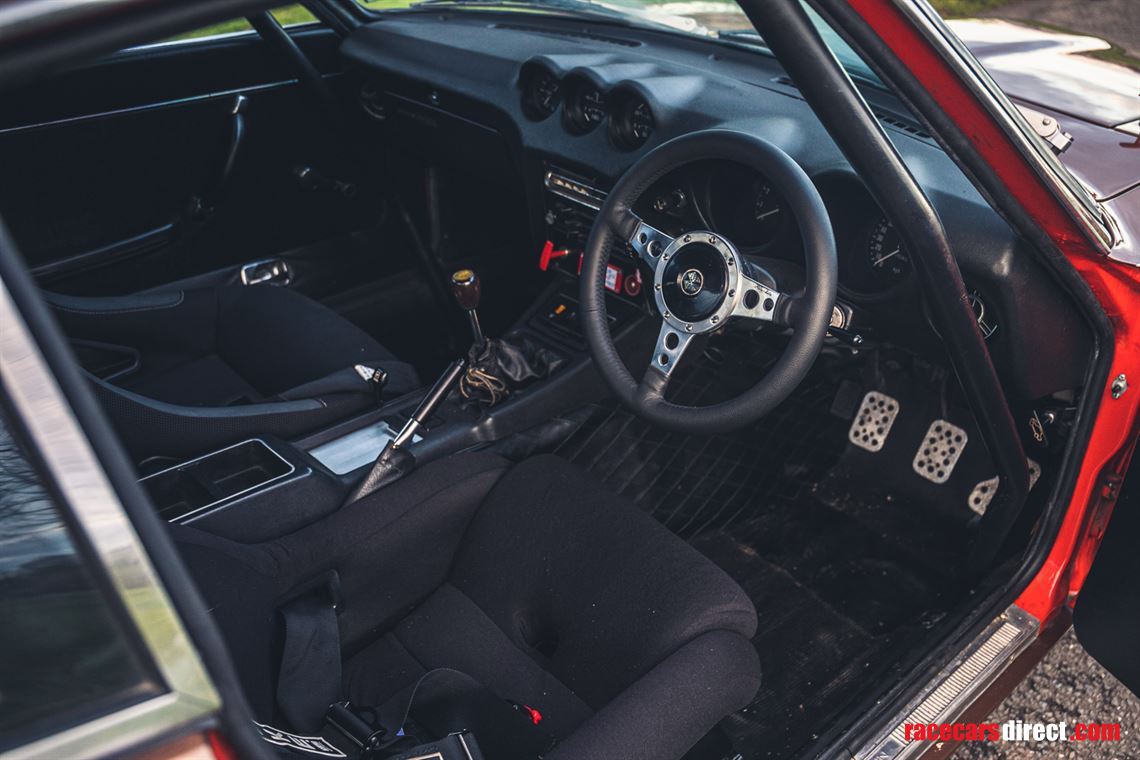 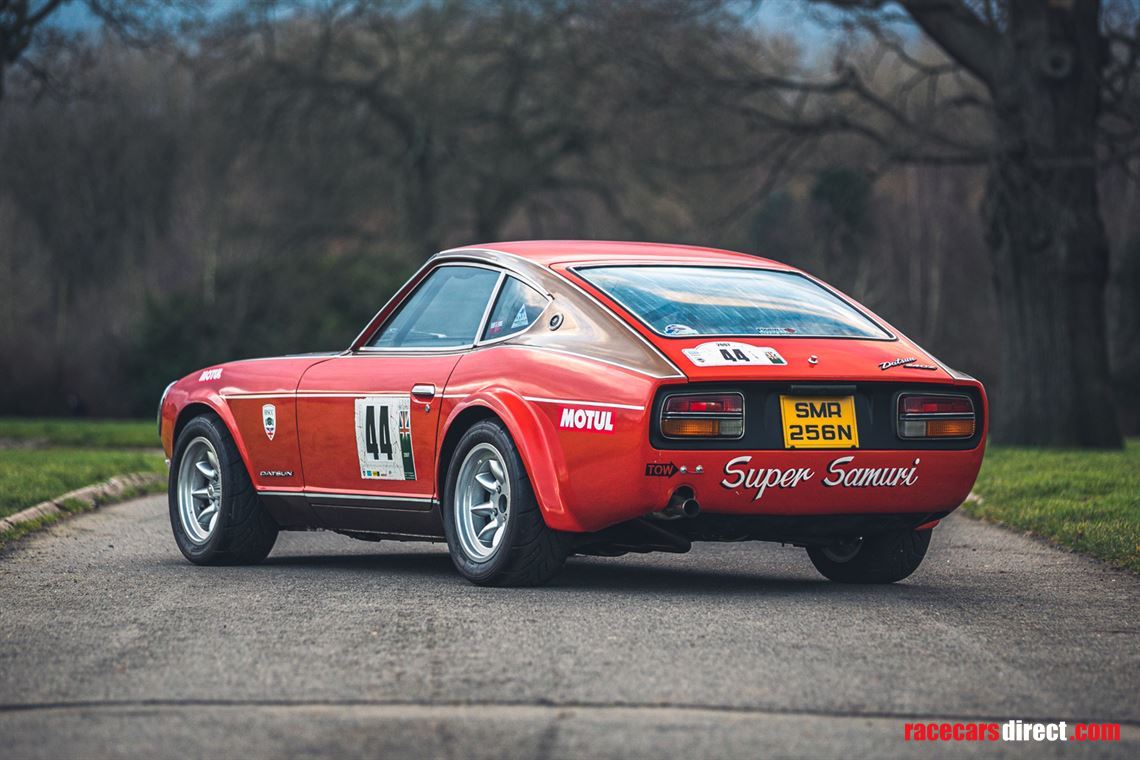 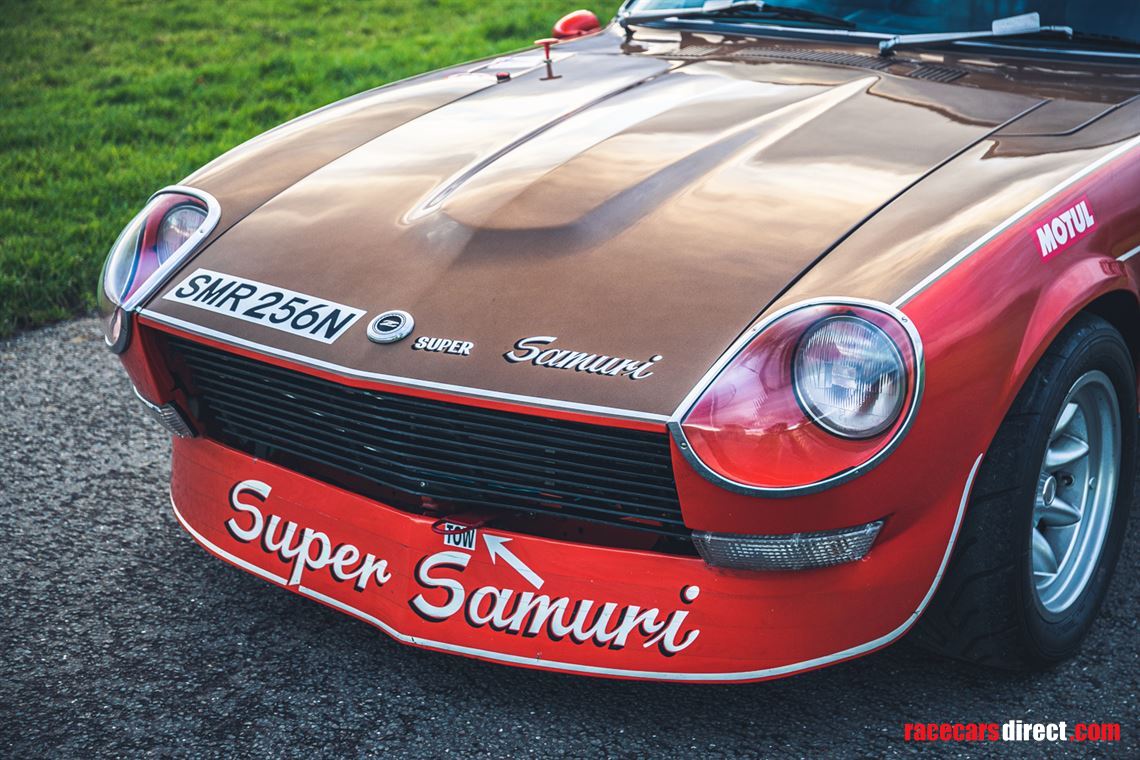 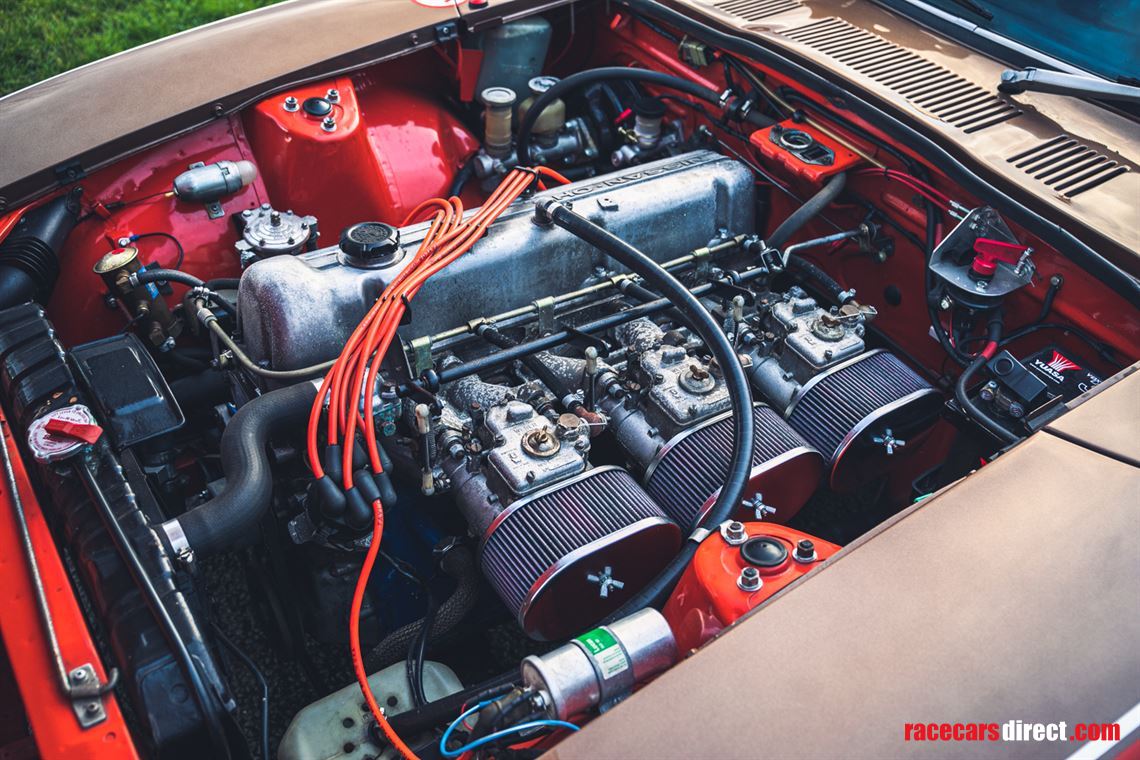 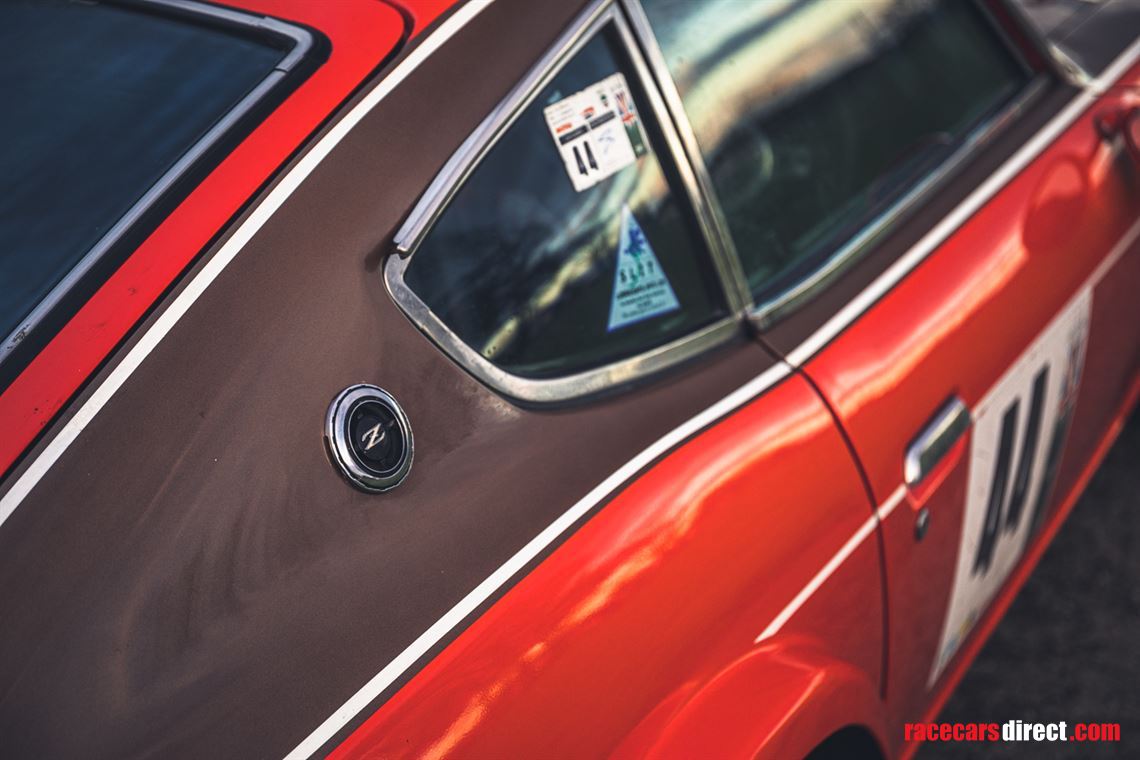 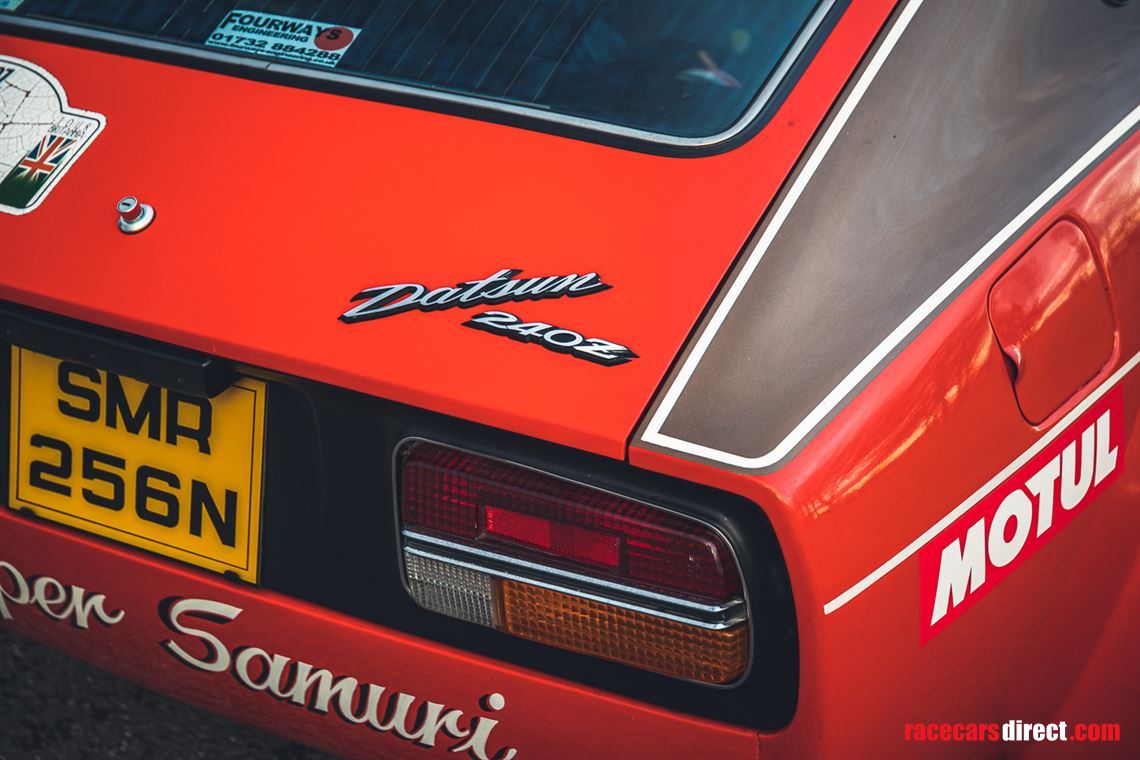 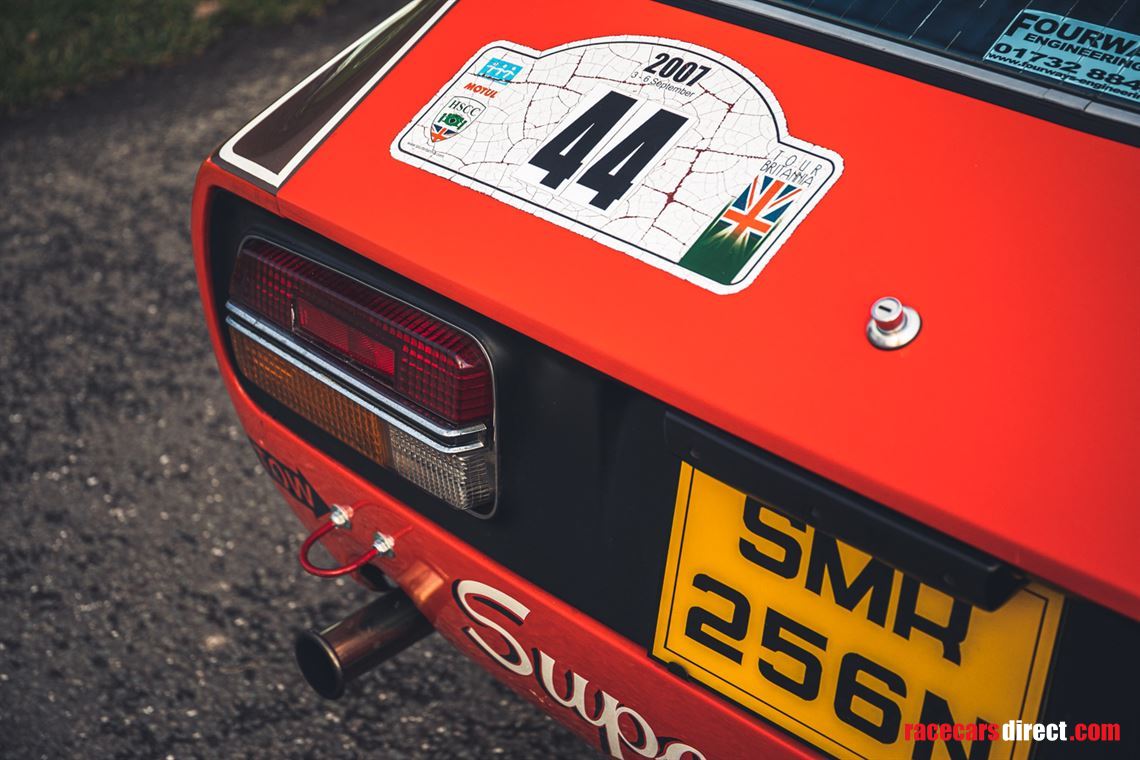 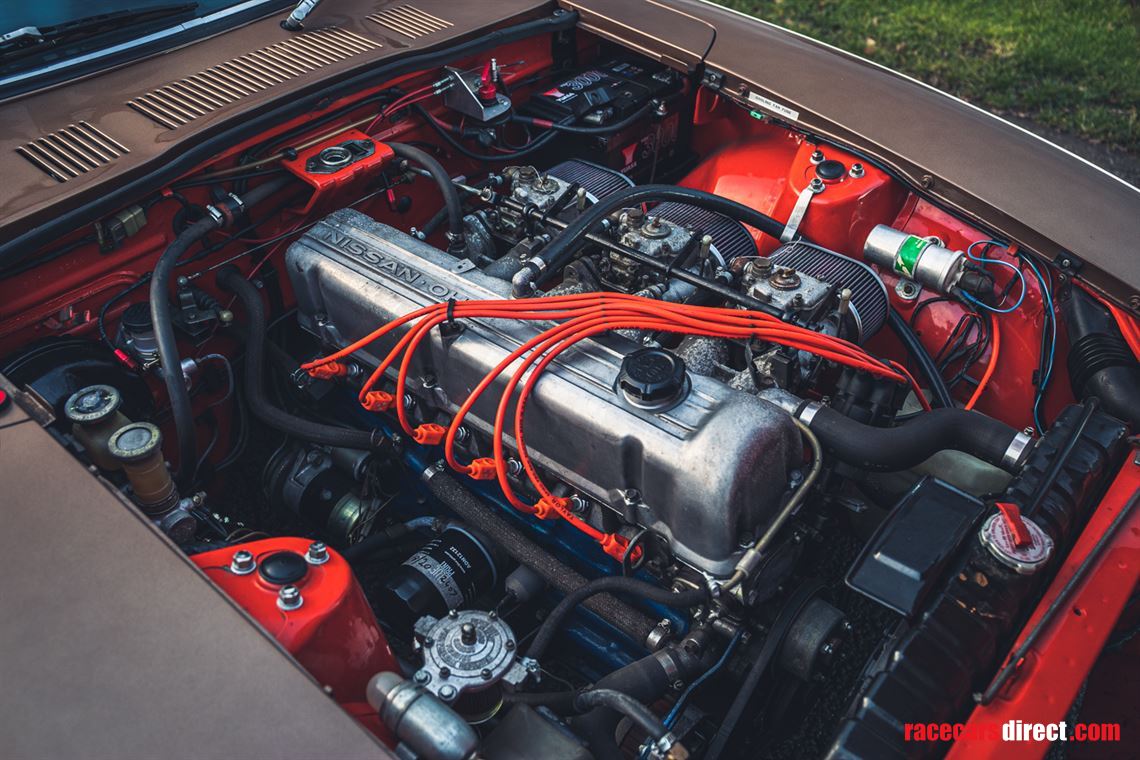 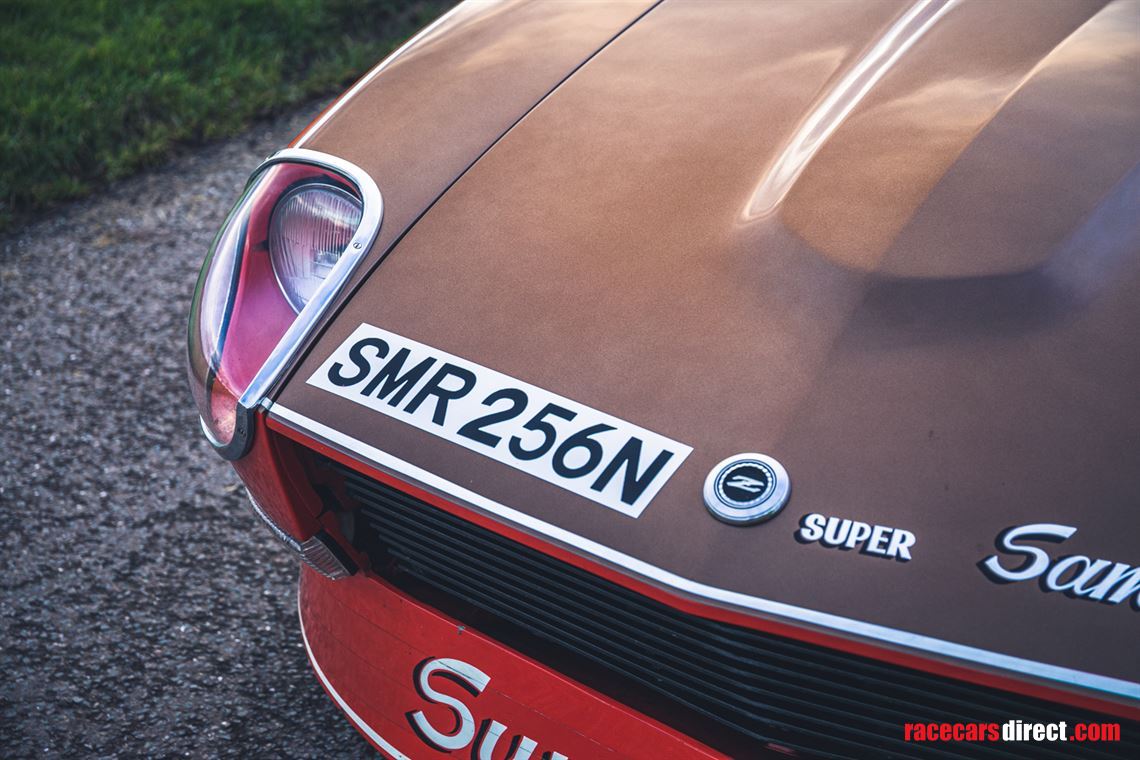 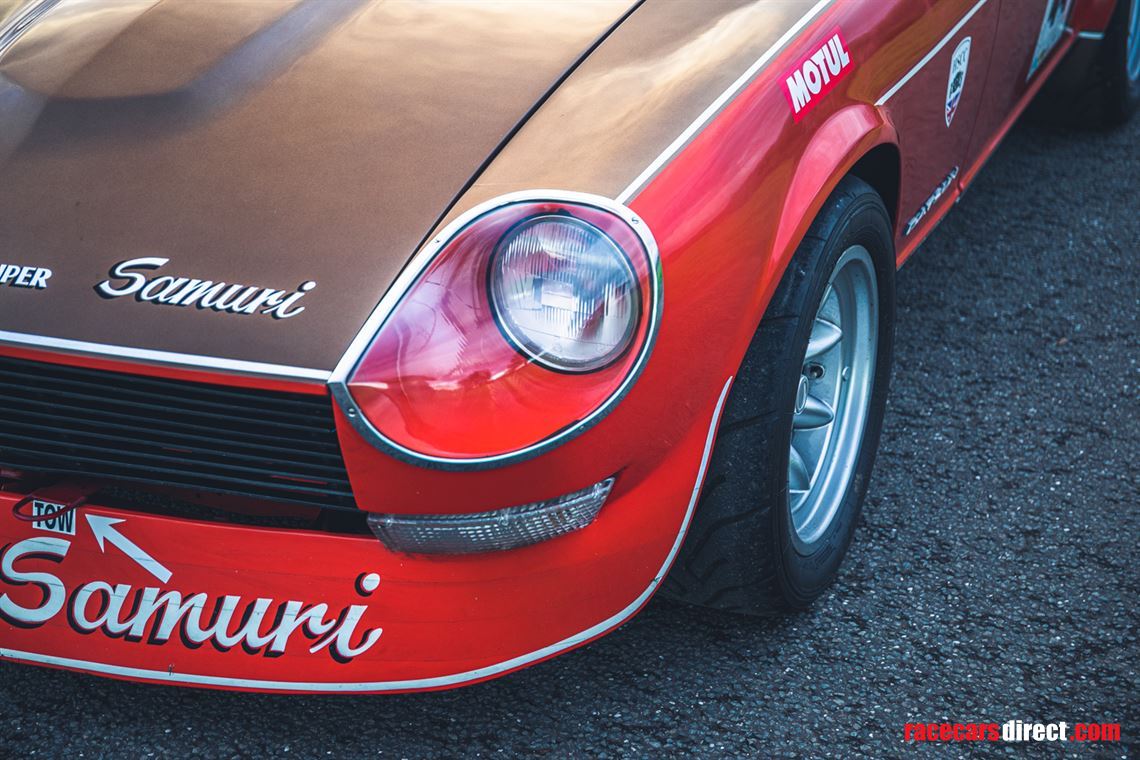 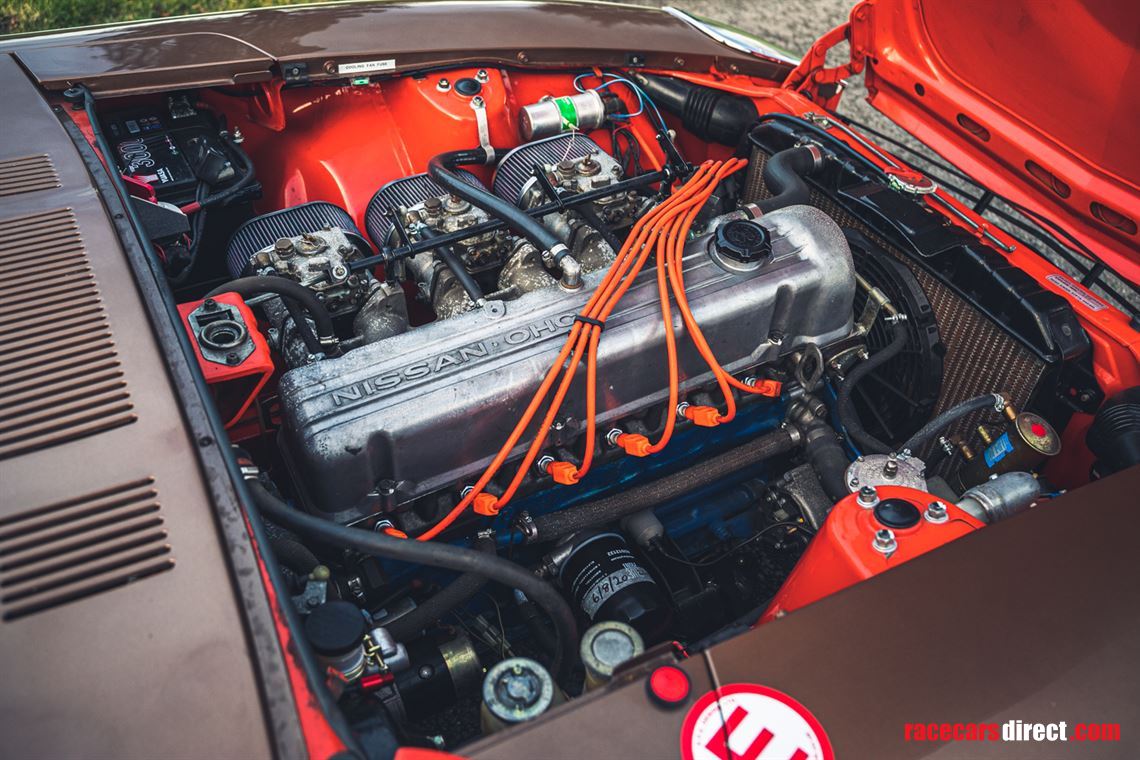 The Datsun 240Z was the first generation of 'Z' two-seat coupés, produced by Nissan in Japan from 1969 to 1978 and its dramatic looks appear to owe a considerable amount to a 1960s styling concept drawn by Count Albrecht Goertz for Datsun, presumably at a time when they were considering ways to break into the European sports car market. The new car was powered by a lusty 2.4-litre, straight six, overhead-cam engine developing around 150bhp and enabling a 0-60 time of 8 seconds and a top speed of 125mph, rather impressive for the period. A five-speed manual gearbox was standard and the car featured independent suspension all round with MacPherson Struts at the front and Chapman-links at the rear. Rack and pinion power steering and front disc brakes meant that the 240Z was a thoroughly modern package. In the 70s, 240Zs were hot property everywhere, and given that the car's drivetrain was heavily based on the Datsun 510 saloons used widely in motorsport, it was only a matter of time before 24OZs (or the 24ounce as they were frequently called) came under the scrutiny of those companies that like to modify the road-going products of mass manufacturers.

One of the most notable of these was the Samuri Motor Company, who in the early 70s, built modified 240 and 260Zs for sale as turn-key offerings. Its charismatic owner, Spike Anderson, had trained at Broadspeed in the 1960s working on Minis and Anglias before going on to set up his own business called Race Head Services. One of the first cars to benefit from his experience was a humble Datsun 1200 from which he managed to extract 105bhp! and this was the first car to carry the "Samuri" name, a deliberate mis-spelling as the 'Samurai' trade name was not available. His next project was a standard 240Z and, inevitably, the Z was taken apart and given the Spike Anderson treatment. The results were impressive, very impressive and following a glowing review of the car in a national magazine, it wasn’t long before the Samuri Motor Company was born, offering modified Zs and performance parts to the buying public.

This, right-hand drive, 240Z was bought new in Cyprus by a serving British Army Captain while on a tour of duty - it still has a bullet hole in the rear deck from being ambushed by insurgents - and was later privately imported into the UK upon his return. The car was subsequently sold to well-known ‘Modsports’ racer, Eddie Stephens, who took it to Spike Anderson for conversion to ‘fast road’ Samuri specification around the end of 1974. The Samuri took in a few ‘production car’ races before Eddie, unfortunately, managed to drop it into a ditch on the way home one evening and, the following day, it was pushed into his barn where it was to remain for many years.

It was eventually rescued by James Morris, the knowledgeable author of the Haynes Super Profile book, Datsun 240Z/260Z/280Z. A full restoration and upgrade was carried out during 1997/98 by James in collaboration with rally-driver and ‘Z’ specialist, Kevin Bristow and the project was guided and supervised by Spike Anderson himself. Pleasingly, within the history file, is a document signed by Spike (20/08/2000) confirming that HS30-012065 (SMR 256N) was built by Samuri Conversions as a fast-road Samuri for Eddie Stephens and also confirming that he assisted in the Morris/Bristow restoration to ‘road-race’ Super Samuri specification. The finished car featured in Classic & Sports Car magazine (November 1998 issue).

Full details of the car’s spec at the time are in the file (too lengthy to list here) but include an engine over-bore to 86mm for a capacity of 2565cc, gas-flowed big-valve head, ‘works’ cam, Mangoletsi manifold, triple Weber 45DCOEs, heavy-duty transmission, extensively modified/upgraded, brakes and suspension and much more. Externally the car was de-bumpered and smoothed off, fitted with extended wheel arches and spoilers, and finished in the correct Super Samuri livery (Datsun 110 ‘Flame’ and Chrysler ‘Tango’ metallic) with hand-applied signwriting and coach lines.

In March 2007, SMR 256N was offered for sale by Bonhams and purchased by JD Classics who registered it in their name on 28/08/2007. They, in turn, sold it to Paul Kennelley of Pevensey on 28/10/2015 who taxed it on the 1st of November and the MOT in the file indicates that it was tested on 19/11/2015 at a mileage of 5,645. He wasted no time in going through the car from one end to the other, listing everything that needed attention and delivering the car to marque experts, Fourways Engineering, on the 3rd of December. The detailed invoice (9/02/2016 @ 5,704 miles) runs to 3 x A4 pages, totals £6,666.43 and includes dozens of small jobs, clips, brackets, hoses, pumps, brakes, bolts, washers as well as some larger items (s/steel exhaust + manifold, chassis repairs, new Ridgard seats, Luke Harnesses and a Moto-Lita wheel). It’s almost as if he had given Fourways carte blanche to just provide whatever the car needed. On the 16th of February, the rejuvenated Datsun was popped onto the rolling-road at BD Engineering at Newington and the print-out in the file indicates that it was producing 183.1bhp at 6300rpm.

In May of 2016, our vendor became the latest owner of this remarkable car. The current indicated mileage is 5,821 and, as is evident from our photographs, it remains in wonderful condition. With the popularity of these cars in period and, possibly even more so now, they were frequently replicated, however, to find an original Spike Anderson-built Samurai is rare, let alone one that was further developed under his auspices some twenty years later into a Super Samuri. Unique in the proper sense of the word.

Prior to sale the car has been refreshed with work done to the brake and clutch systems as recently as early February 2021 by Sussex Sports Cars, the total monies spent exceed £1,500.

SMR 256N is supplied with a well-presented history file containing V5s, older MOTs, invoices, Bills of Sale, the original post-conversion spec and the aforementioned warranty from Spike Anderson (Samuri Conversions) confirming the car’s provenance. We welcome any inspection of this important motor car.

Original Holman and Moody confirmed race engine as used in their GT40 and Galaxies.