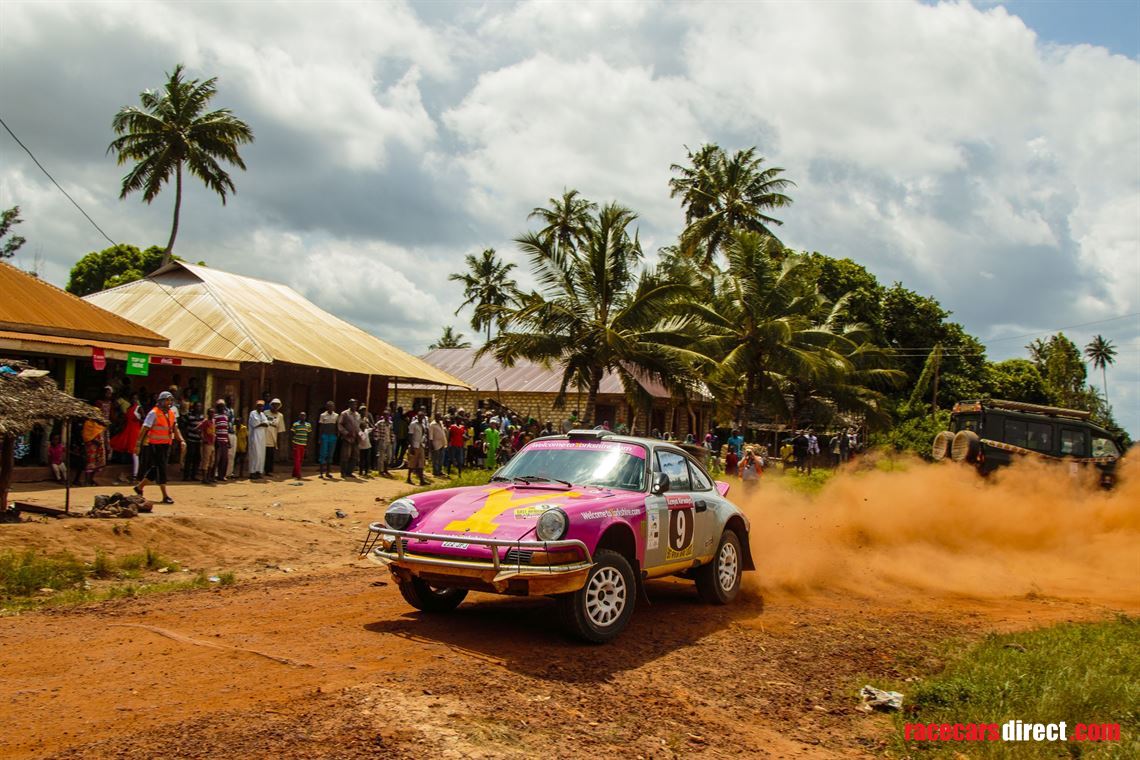 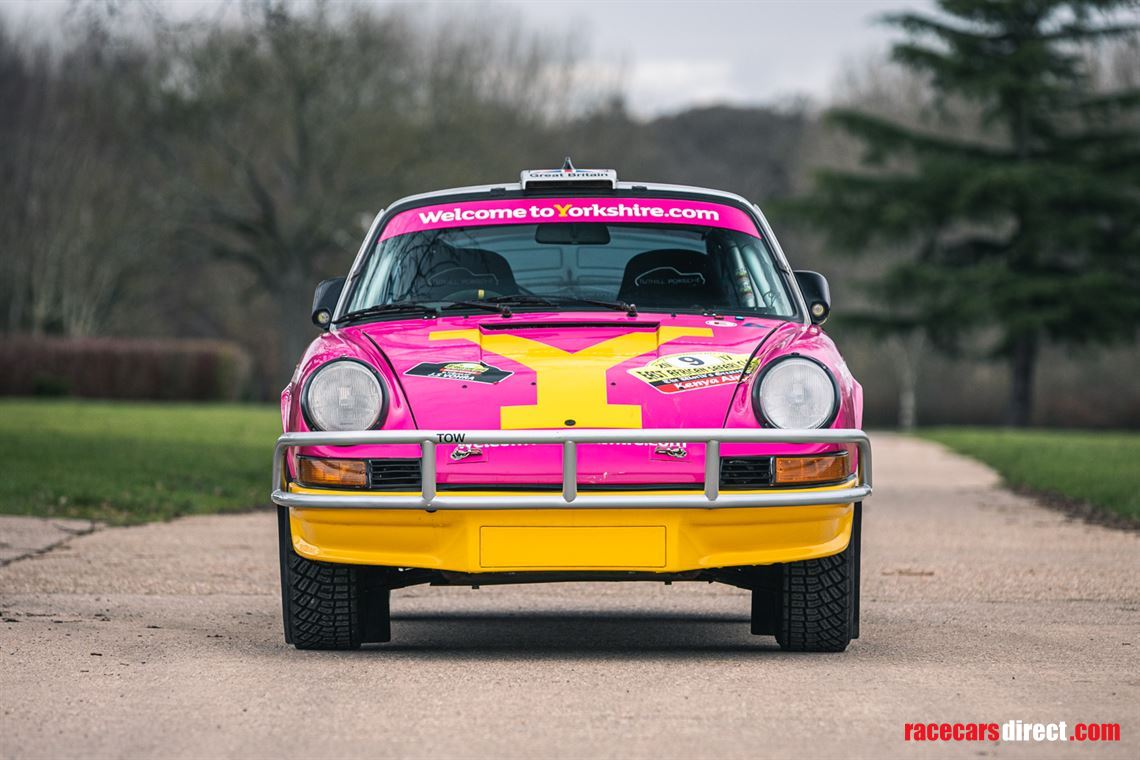 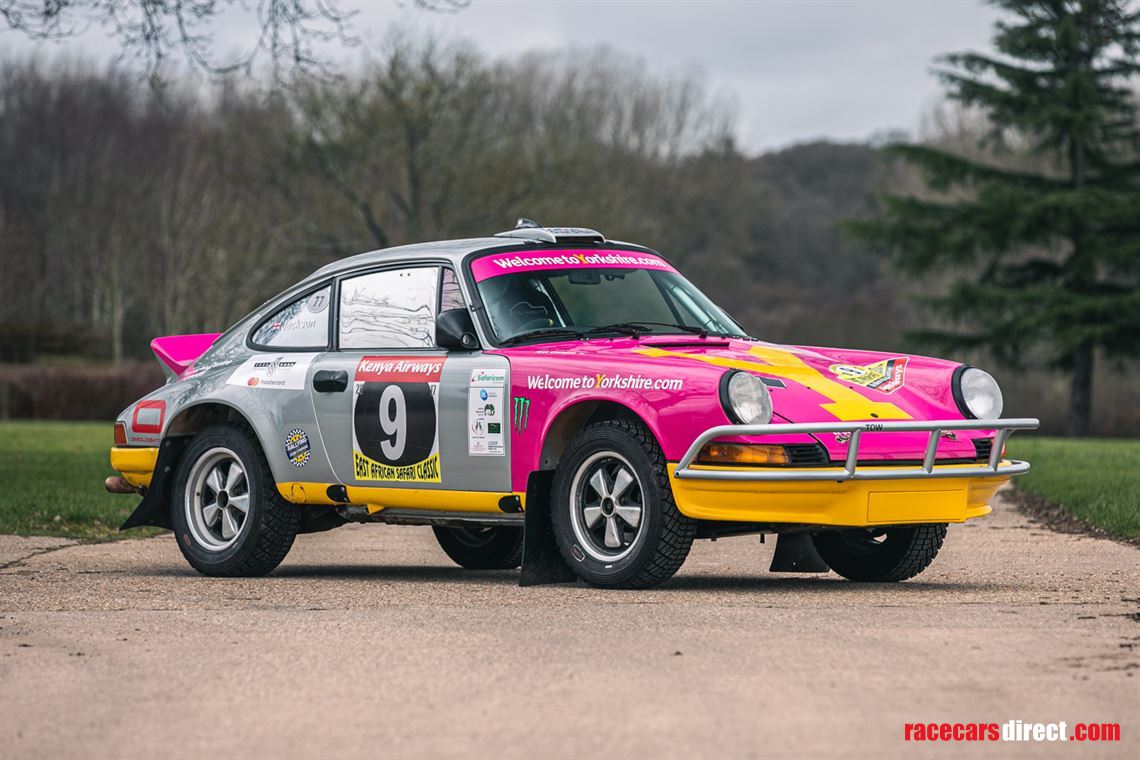 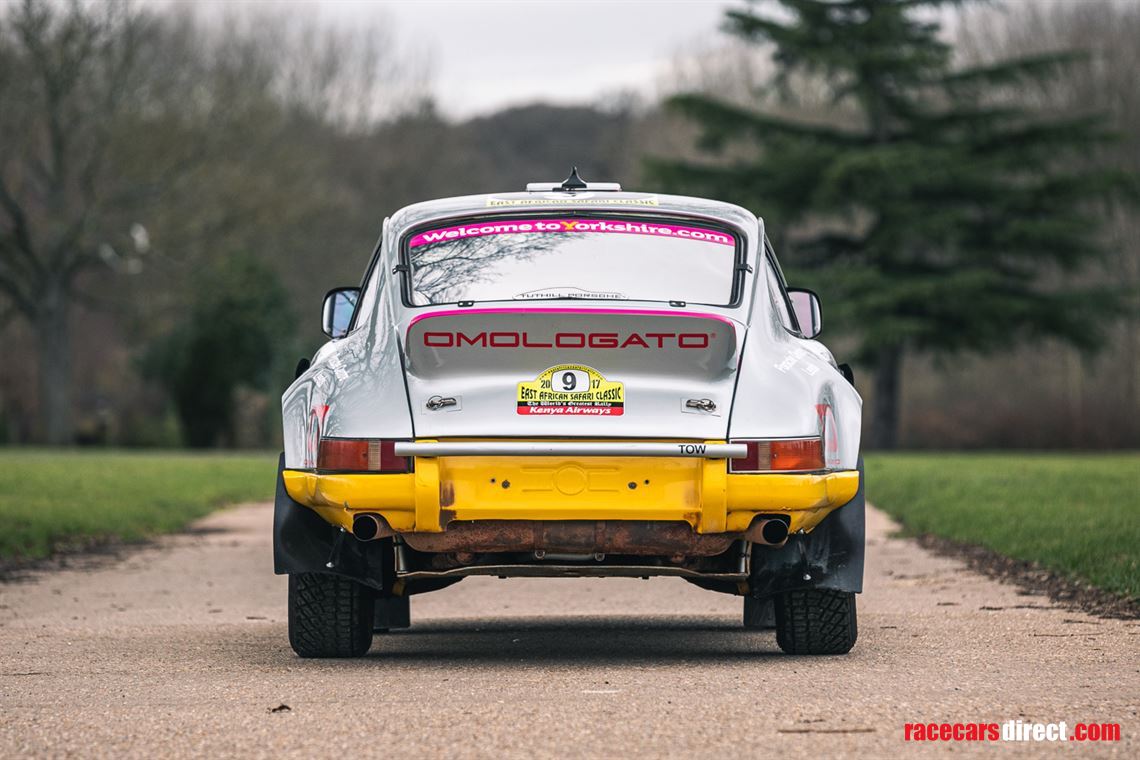 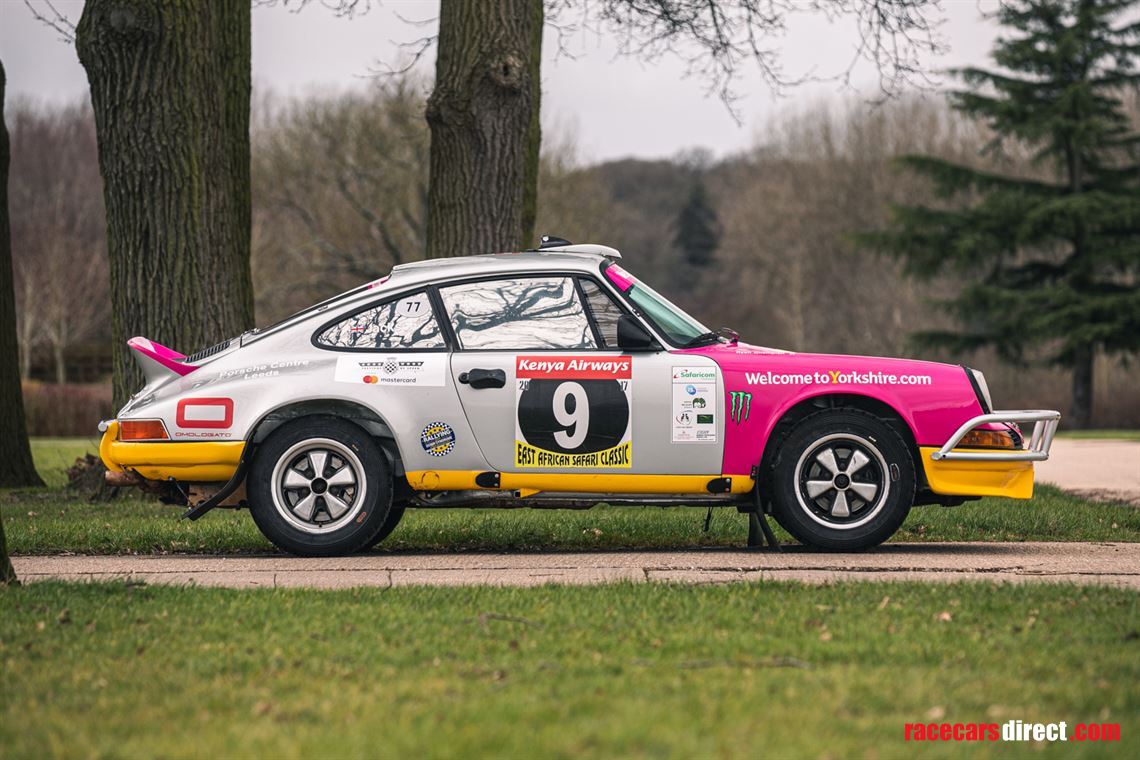 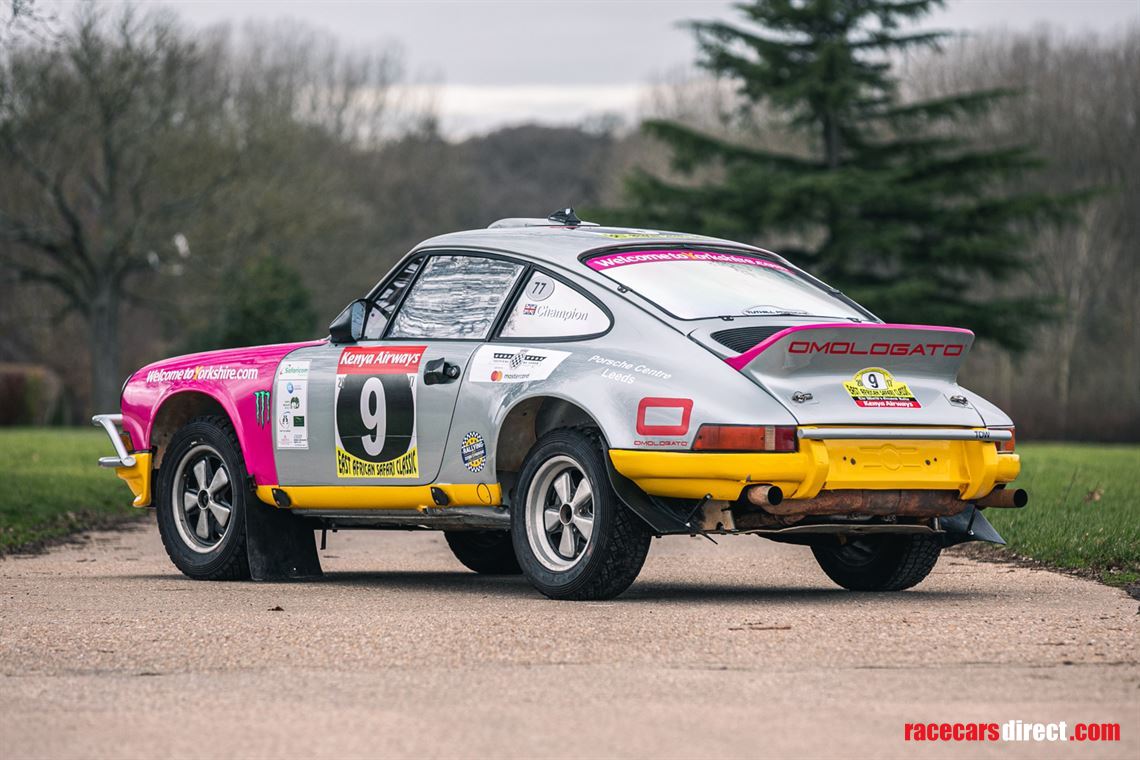 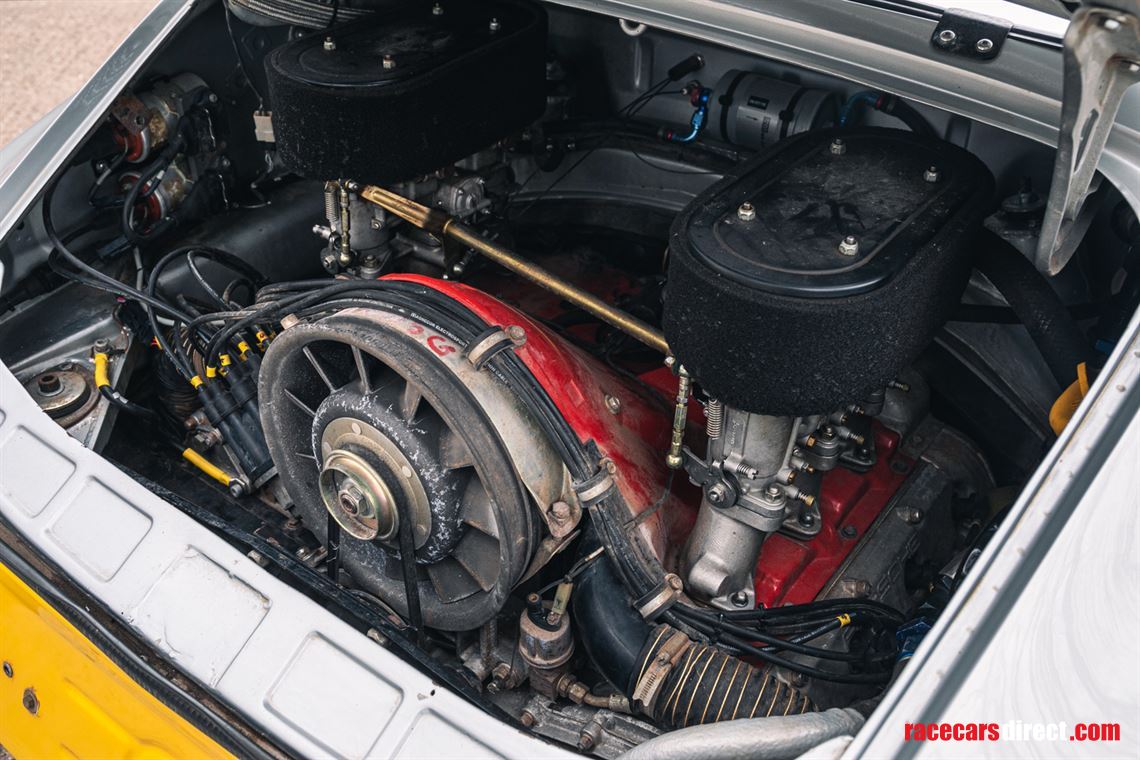 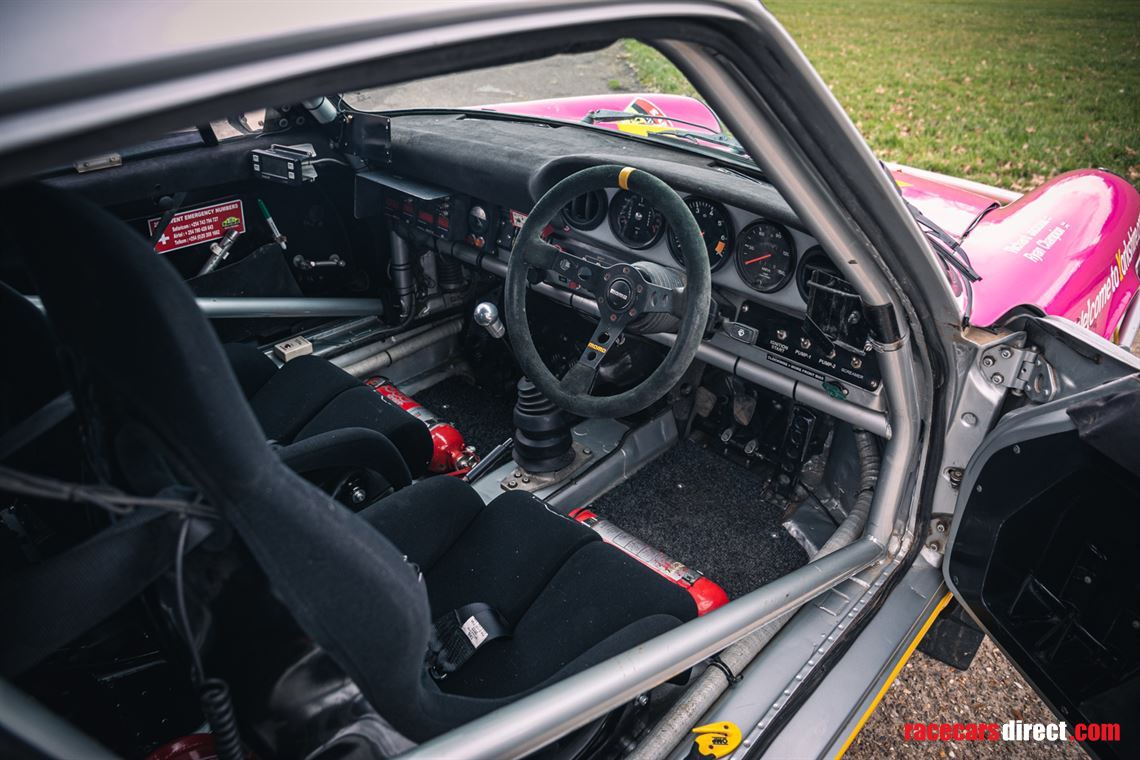 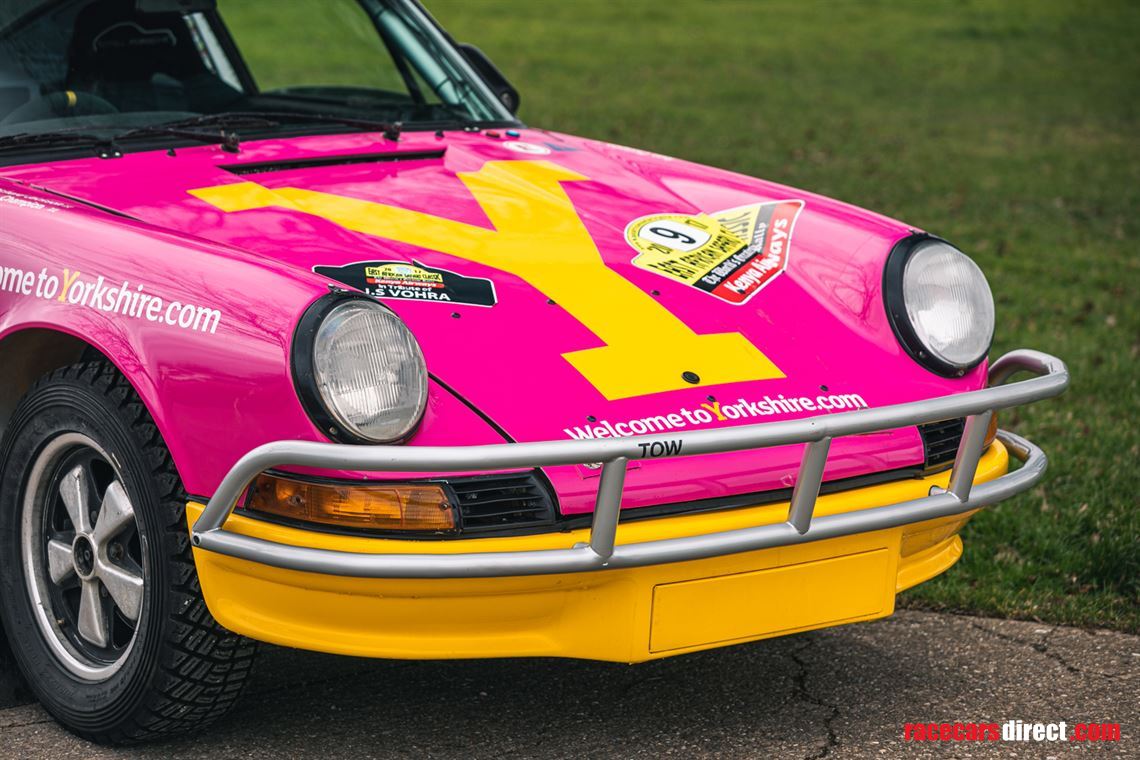 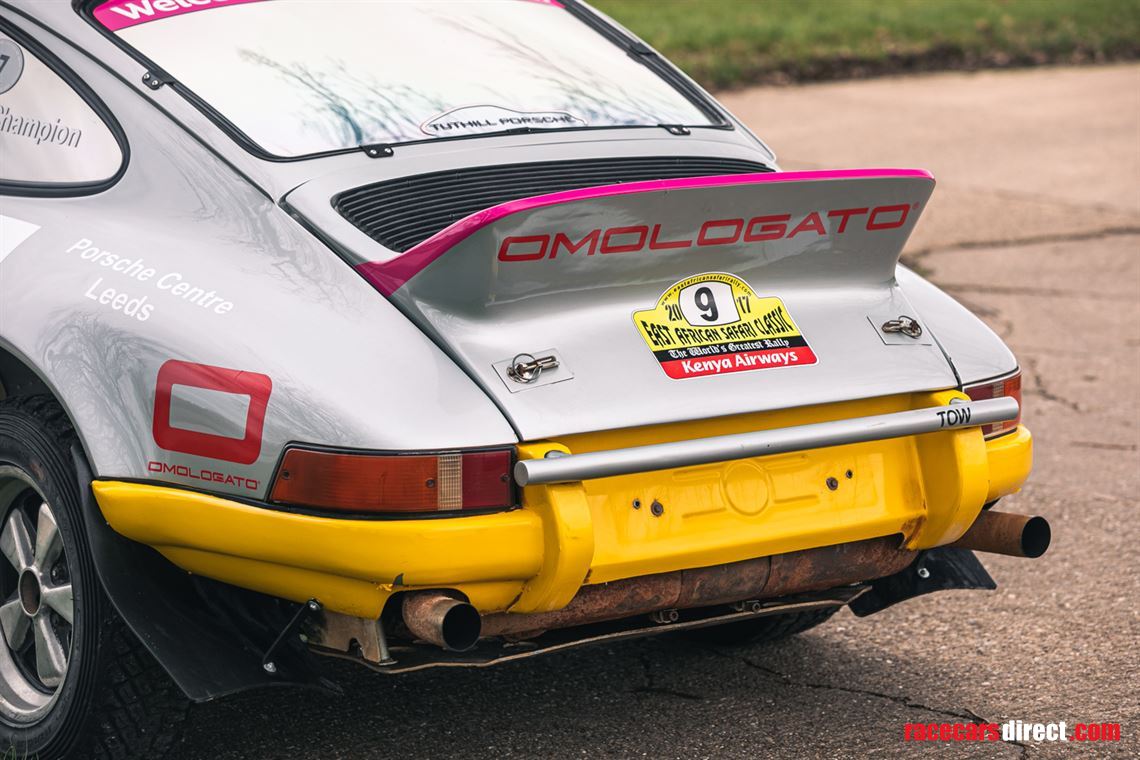 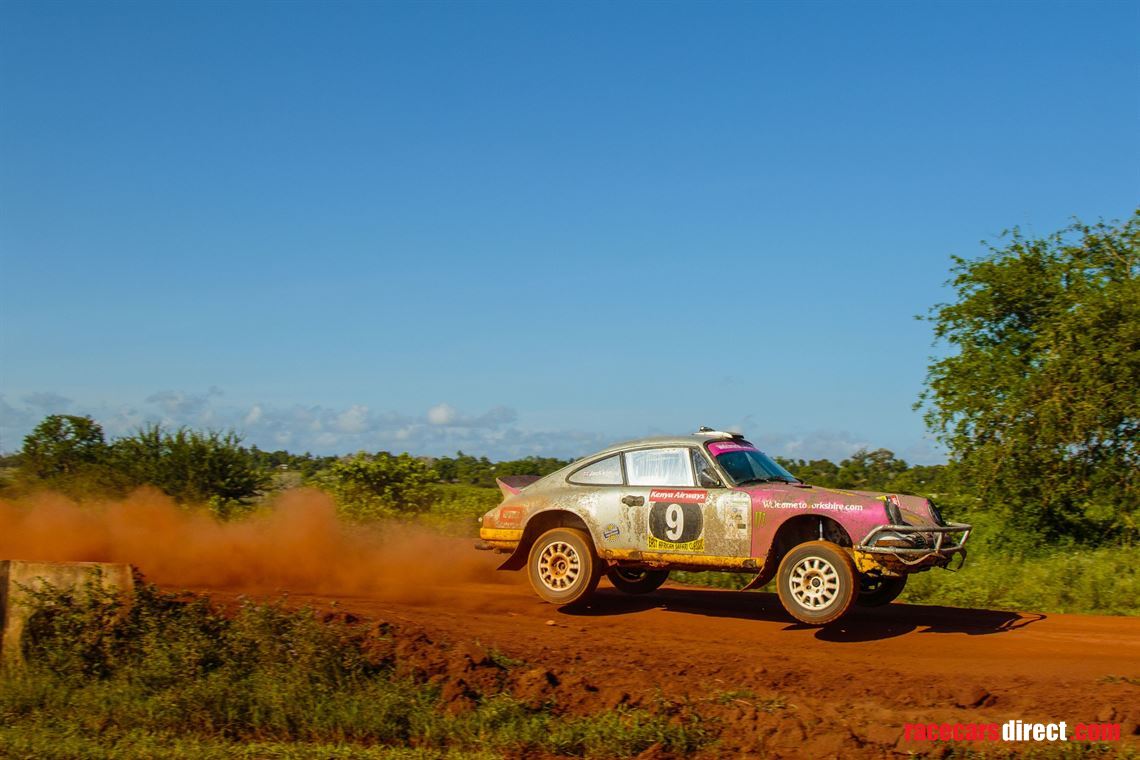 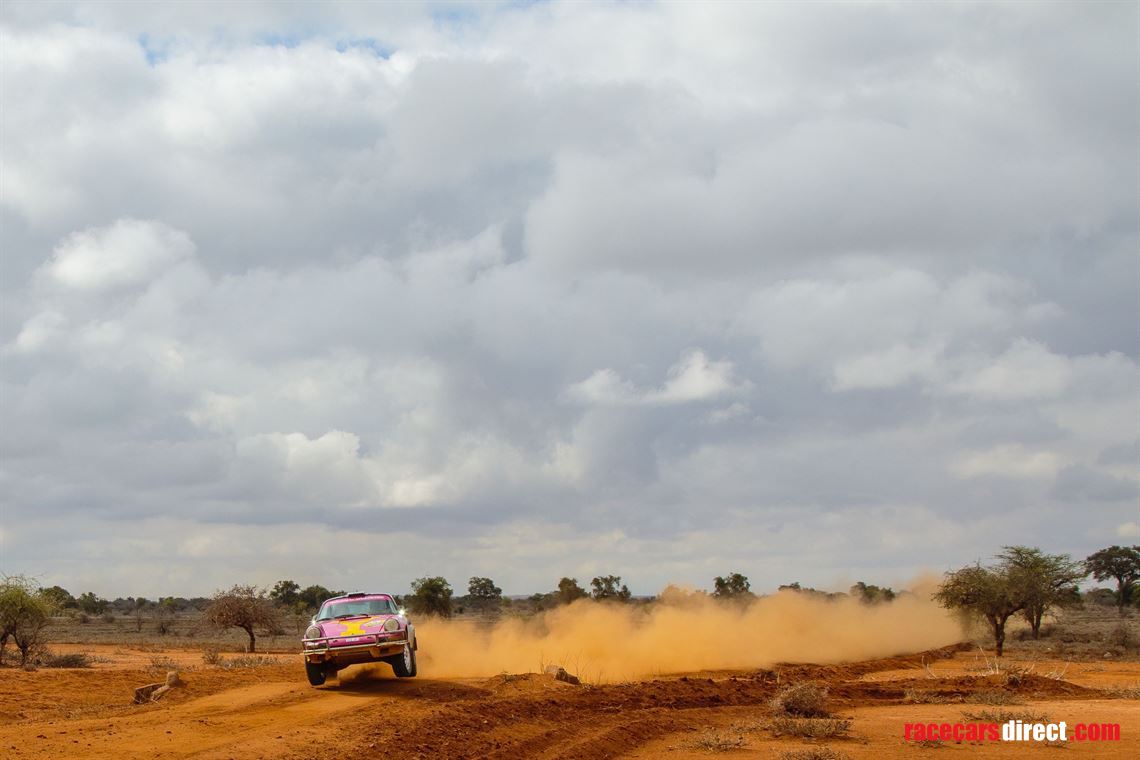 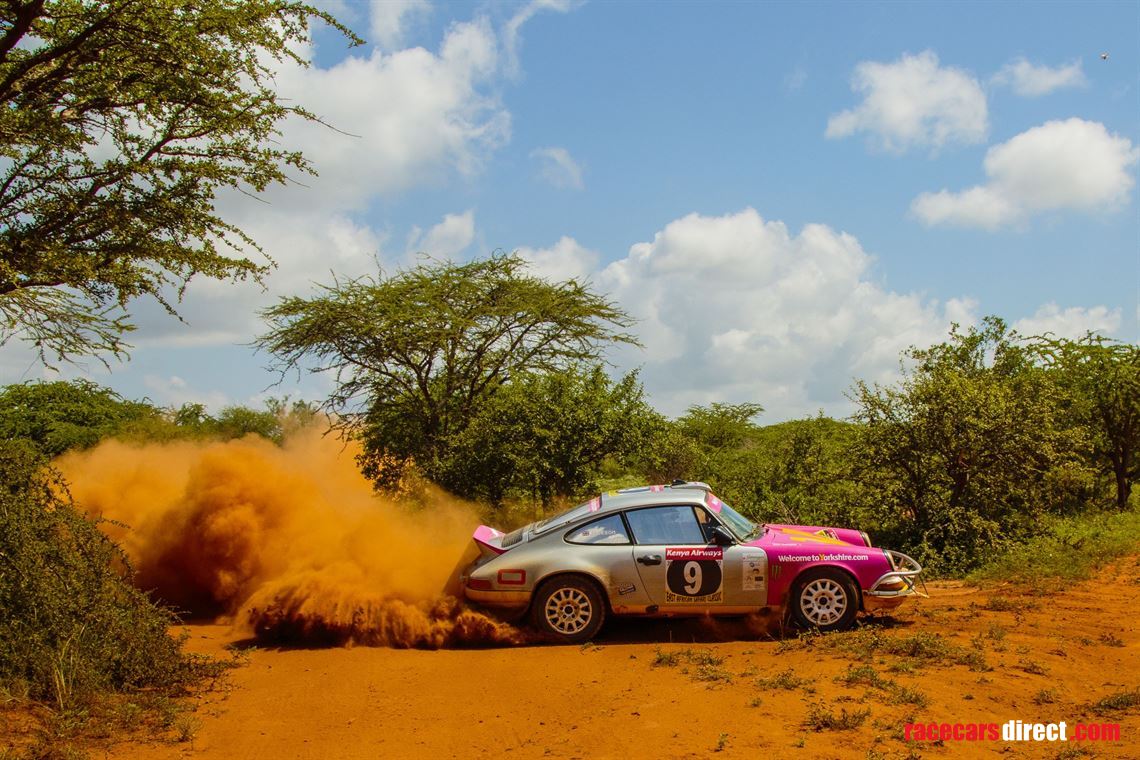 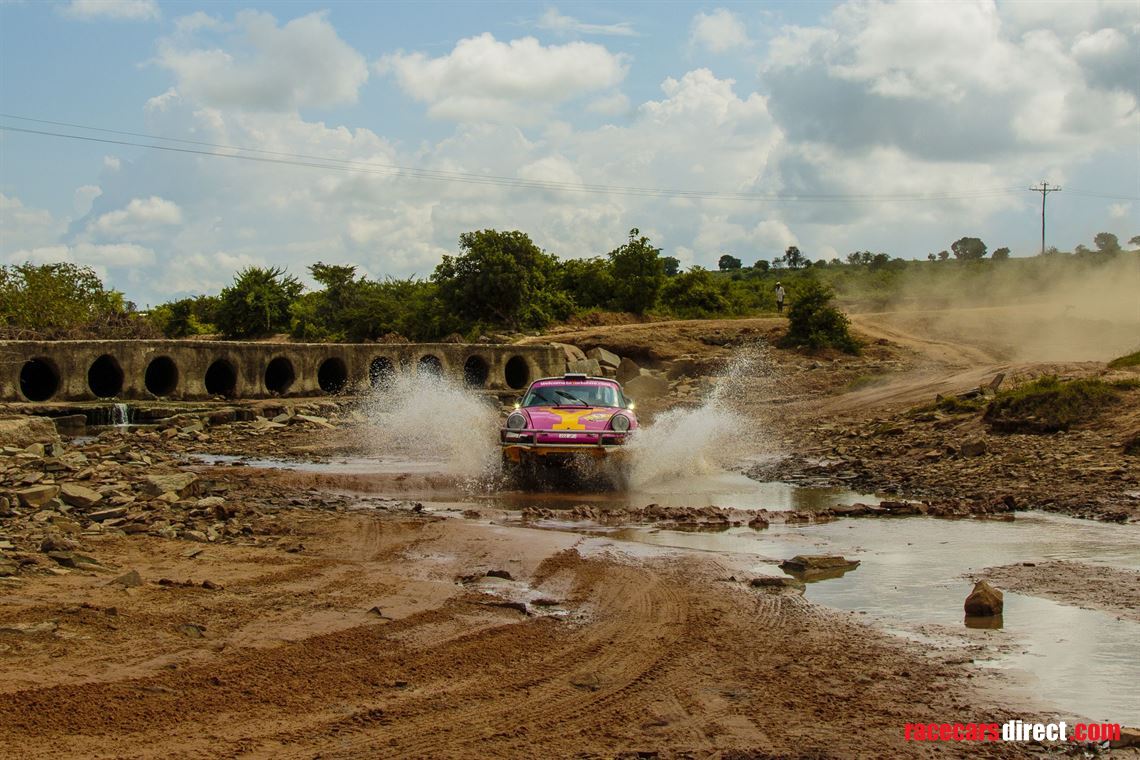 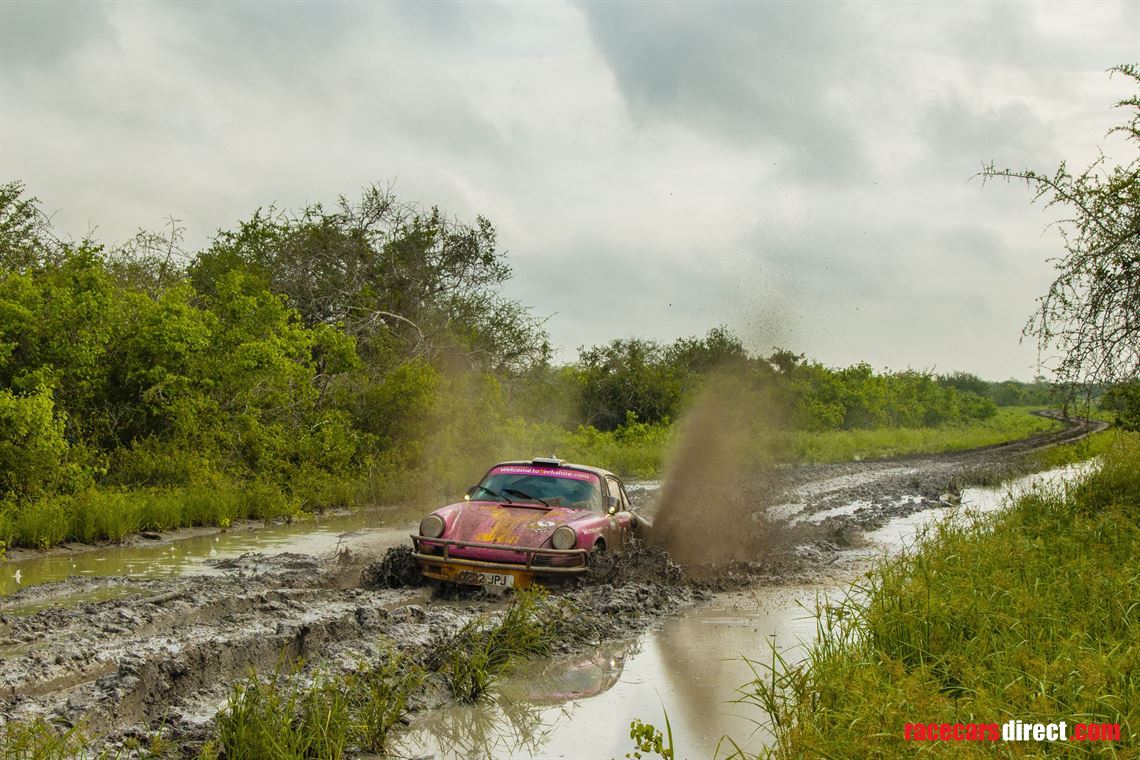 Starting life in January 1975 as a relatively rare Porsche 911 Carrera 2.7 MFI Coupe, this car was converted in to a rally car in the early 1990s and campaigned extensively by legendary Irish tarmac rally driver, Billy Coleman. Fresh from Irish success, it was then purchased in the late 1990s by expert Porsche rally preparation team, Tuthills of Banbury. The team were building rally-winning pre-1965 Porsche 911 2.0-litre cars that were dominating historic rallying throughout Europe at the time, and Francis Tuthill was aware that the new “Post Historic” class (for cars from 1965 -1977) would soon be allowed by the MSA and FIA and this car was his development car for that new class.

Hired by Nick Whale for the 1998 RAC Historic Rally, it was to become his property by the end of the rally as Nick took to the car and realised the potential that it offered. He went on to win the 1999 Safety Devices Rally Challenge outright as well as the first British Historic Rally Championship held in 2000 over eight rounds, four tarmac and four gravel events. The car was successful every time out, including an outright win on the Ypres tarmac rally in 2001.

Sold to our vendor in May 2002, the Porsche was rallied for the next decade or so before being converted, once more by Tuthills into a full-house East African Safari spec rally car. Tuthills had become the leading preparer of cars for this event globally, and Francis’ son, Richard, was now at the helm, building winning Safari-spec cars and running a team of up to 20 cars competing in this amazing bi-annual event. Much work was done to the car at the time and it has continually benefited from their ongoing maintenance and improvements.

The car went on to compete in no less than four East African Safari events, finishing every one, in 2011, 2013, 2015 and finally in 2017 when the car was to take the very top step on the podium and win the event outright. An absolutely amazing achievement by our private vendor and world class rally driver, Ryan Champion, helping him on his way. The pictures capture some of the great moments of this event and show the potential of this car to do it all again when the next East African Safari event takes place at the end of this year. As a Safari-winning car, it receives an automatic entry to the Goodwood Festival of Speed rally stage, where it won in 2018, and also made a guest appearance at the RAC Club on Pall Mall. It was even selected by Porsche Club GB as one of 30 specially invited cars to attend and participate in Porsches 50th Birthday celebrations at Brands Hatch circuit in 2018.

In the history file is an MSA Competition Logbook, MSA papers and an FIA HTP as well as a raft of invoices and history. Some of this documentation may now be out of date, as may some of the car's safety related equipment. Nevertheless this car is a great basis for another Safari project and Tuthills have indicated can be brought up to current front-running specification for a spend of about £40,000. Newly built cars today are around £300,000 plus VAT, making this venerable 911 with such an outstanding pedigree, look relatively good value for money in this price guide.

We encourage close inspection of this car and believe it could be a fantastic UK or European rally car, in either tarmac or gravel trim, or re-prepared to go on and compete in this years Safari event. Like all rally cars various components have been changed or upgraded over time, this includes the engine, the gearbox and the body shell.  It still is a very special thing with an outstanding history and provenance.