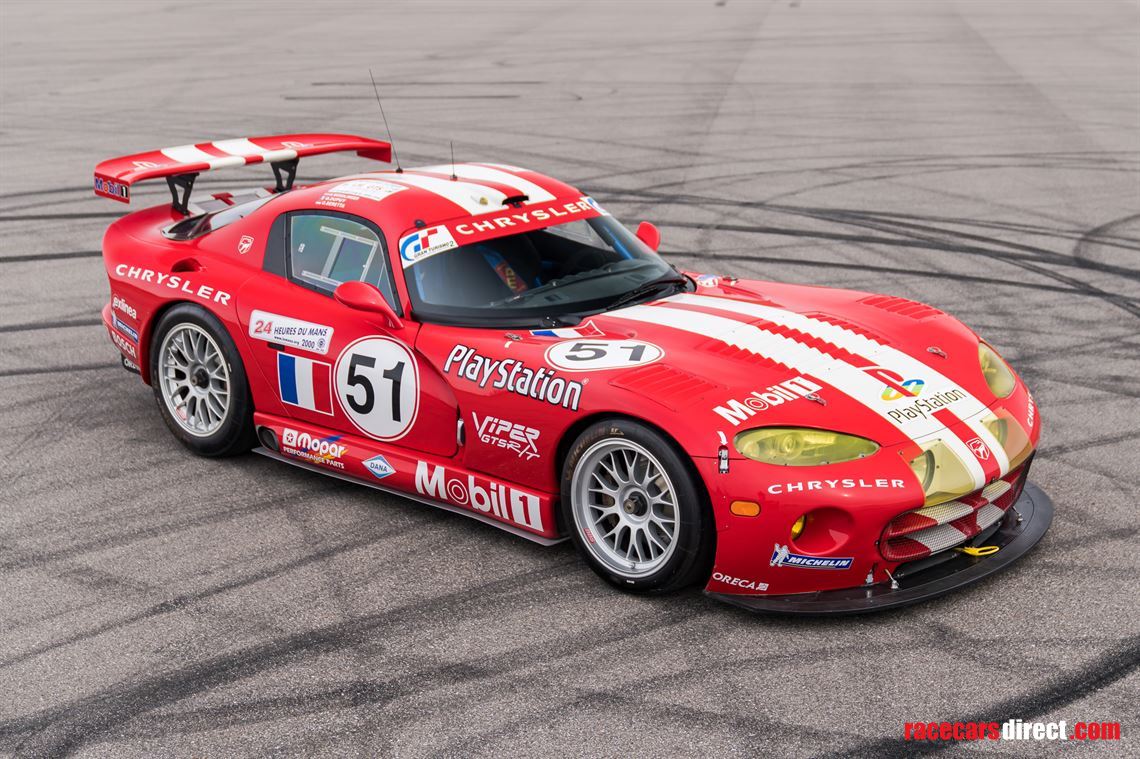 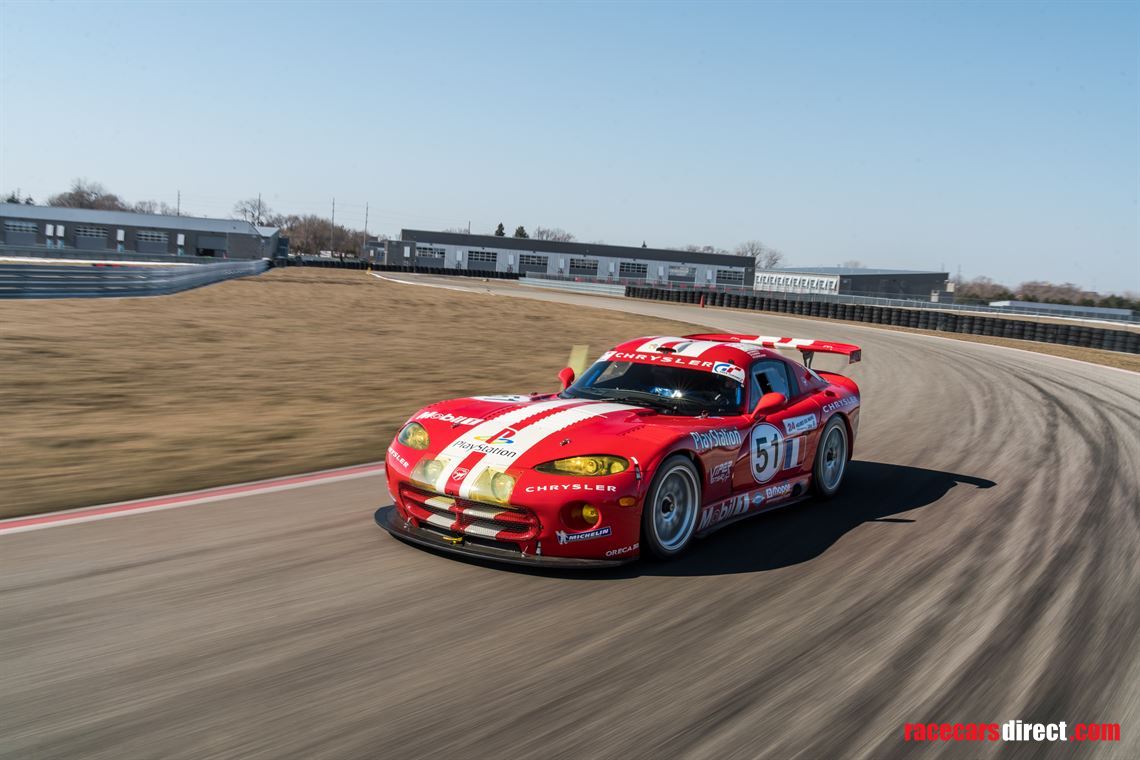 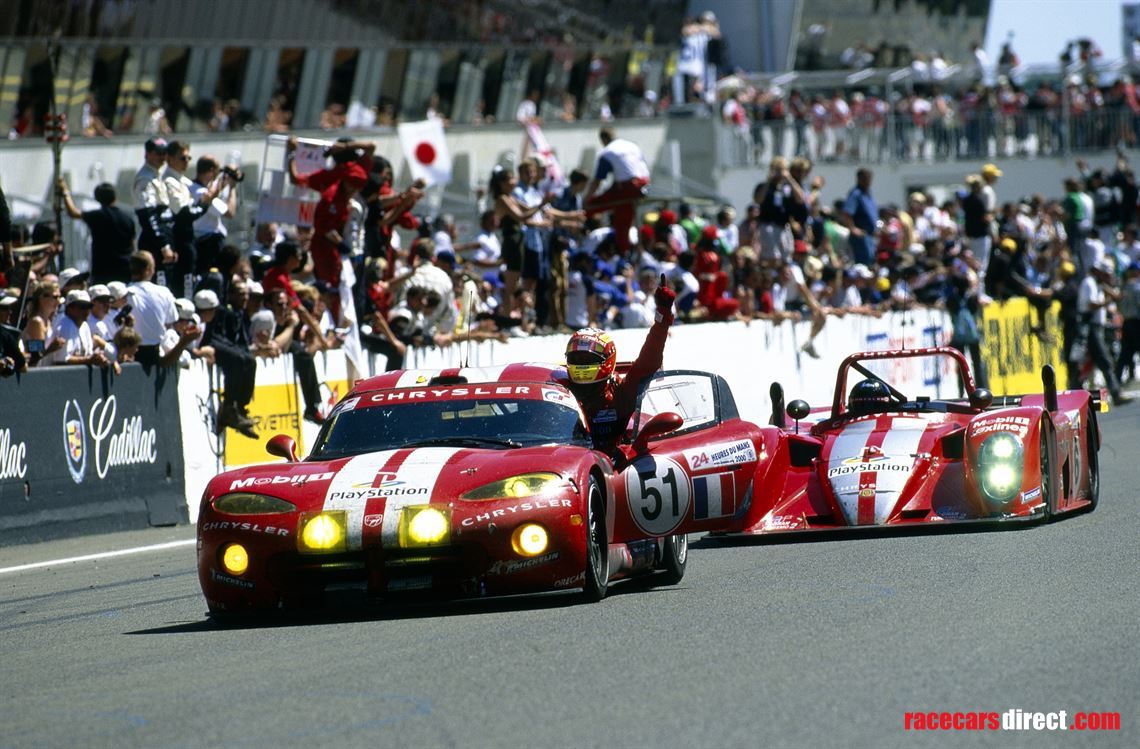 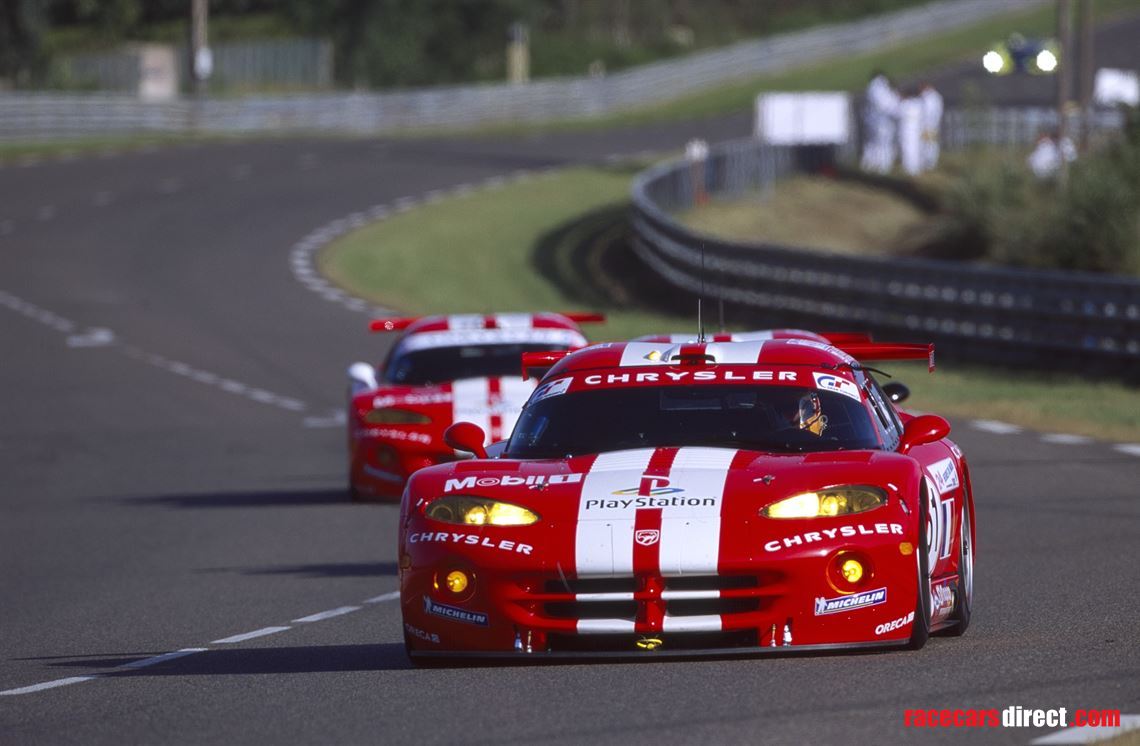 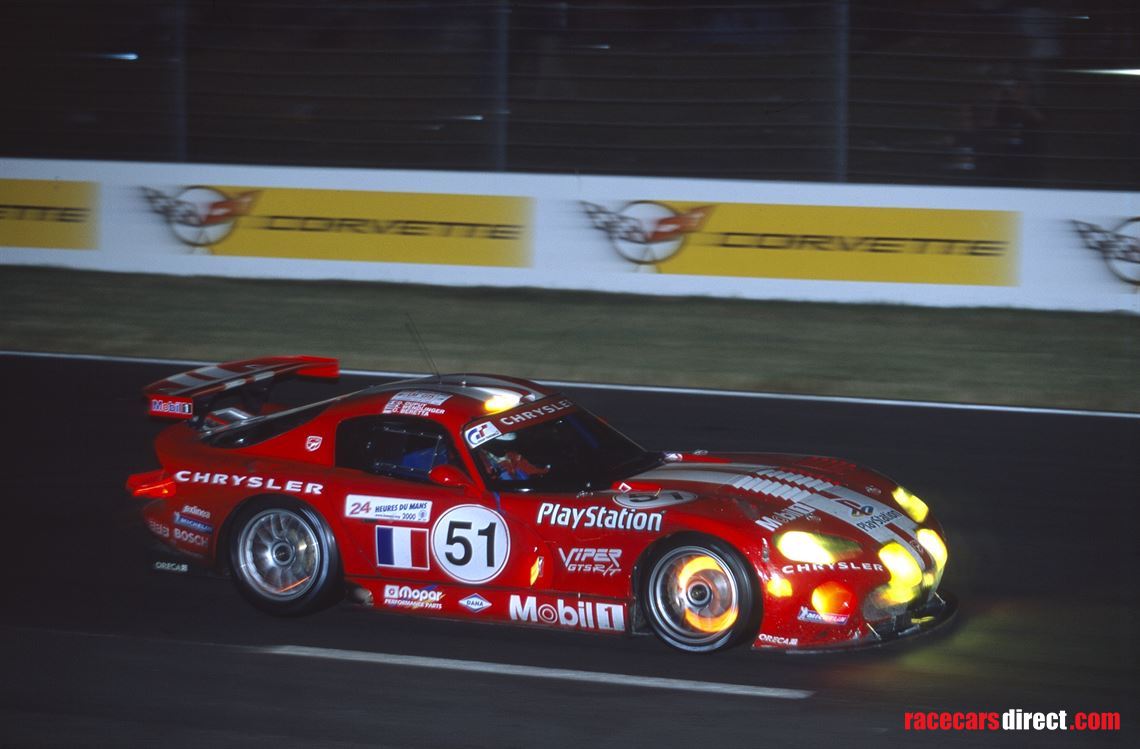 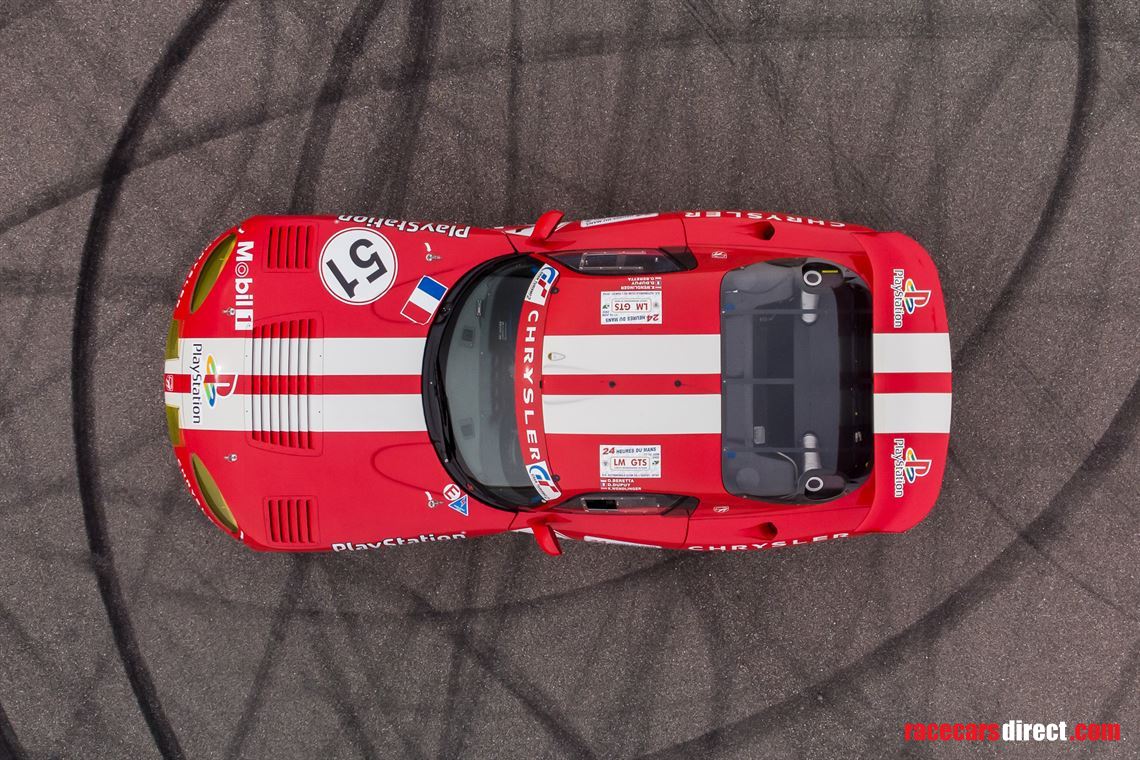 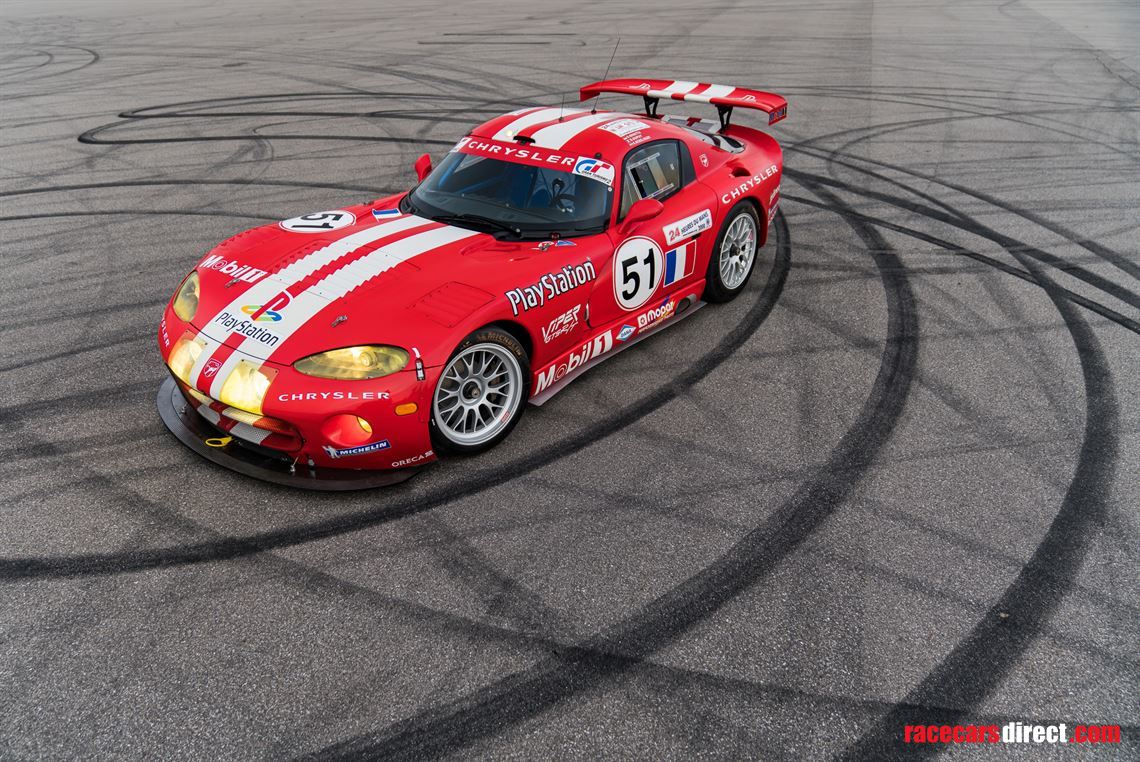 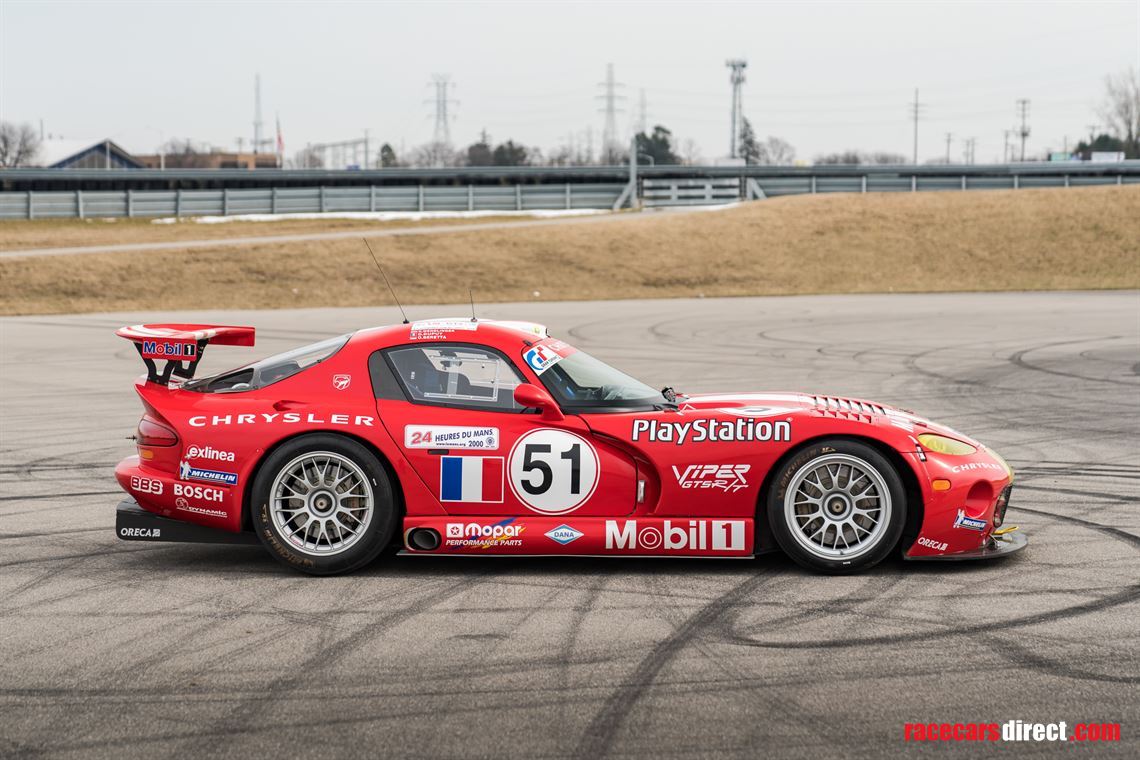 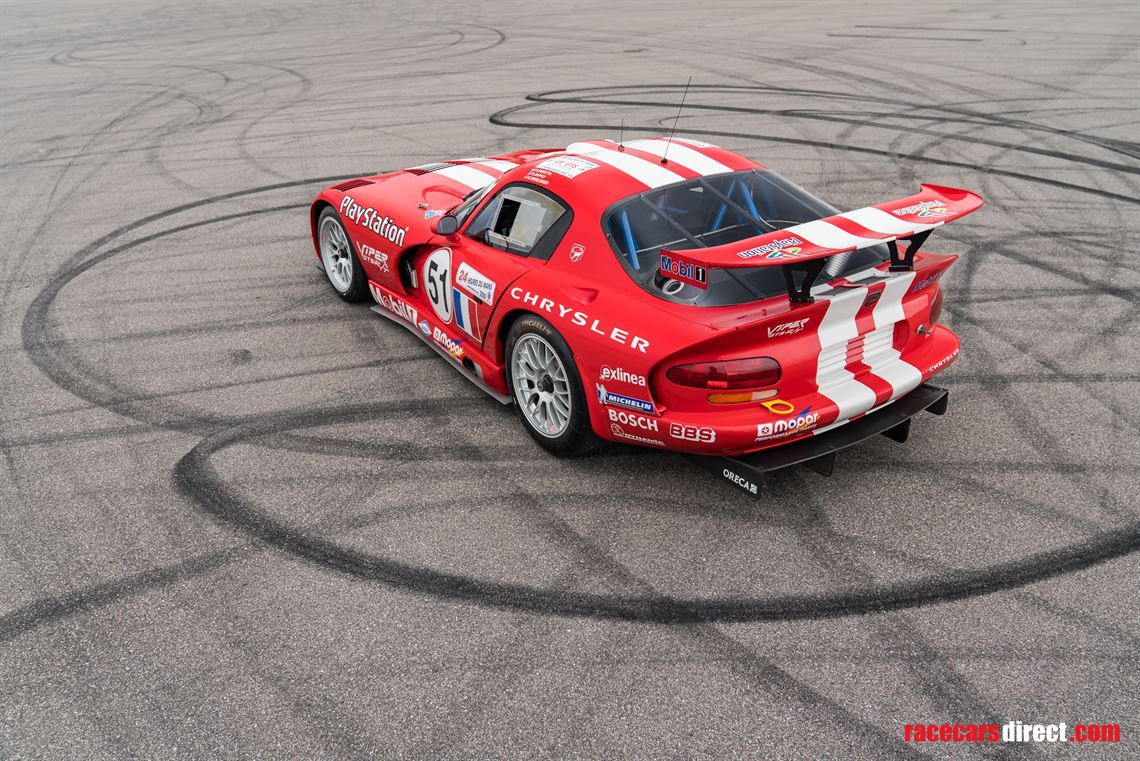 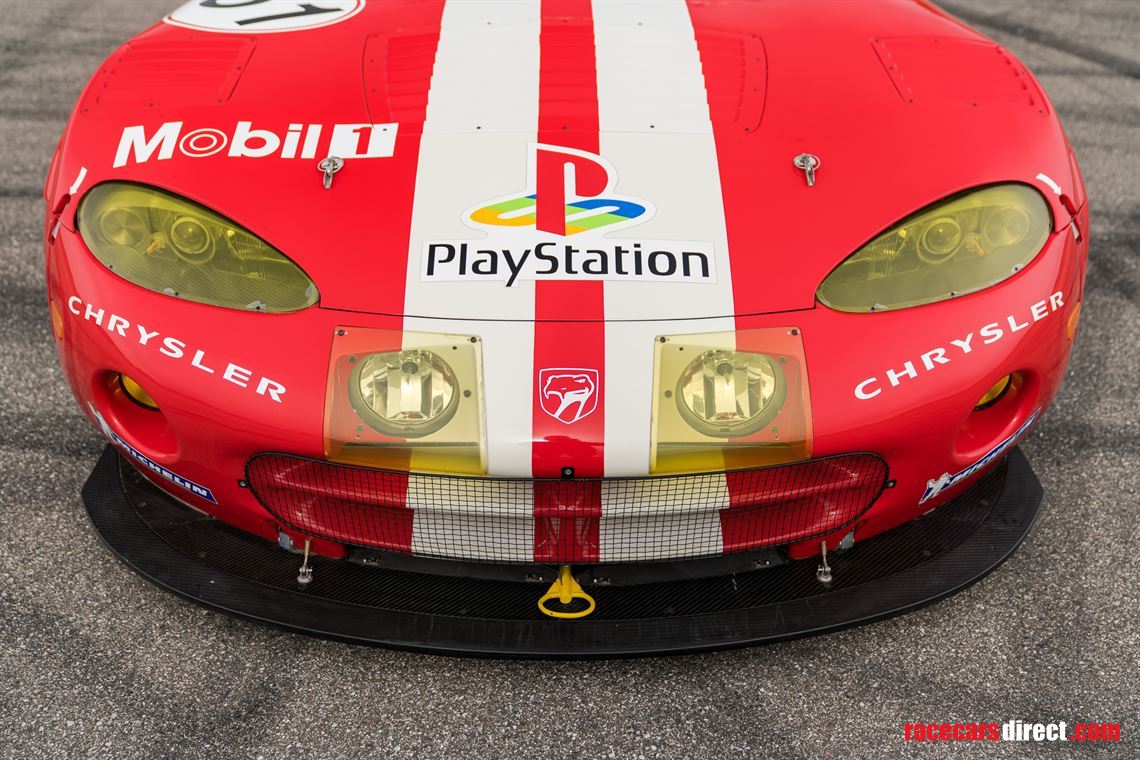 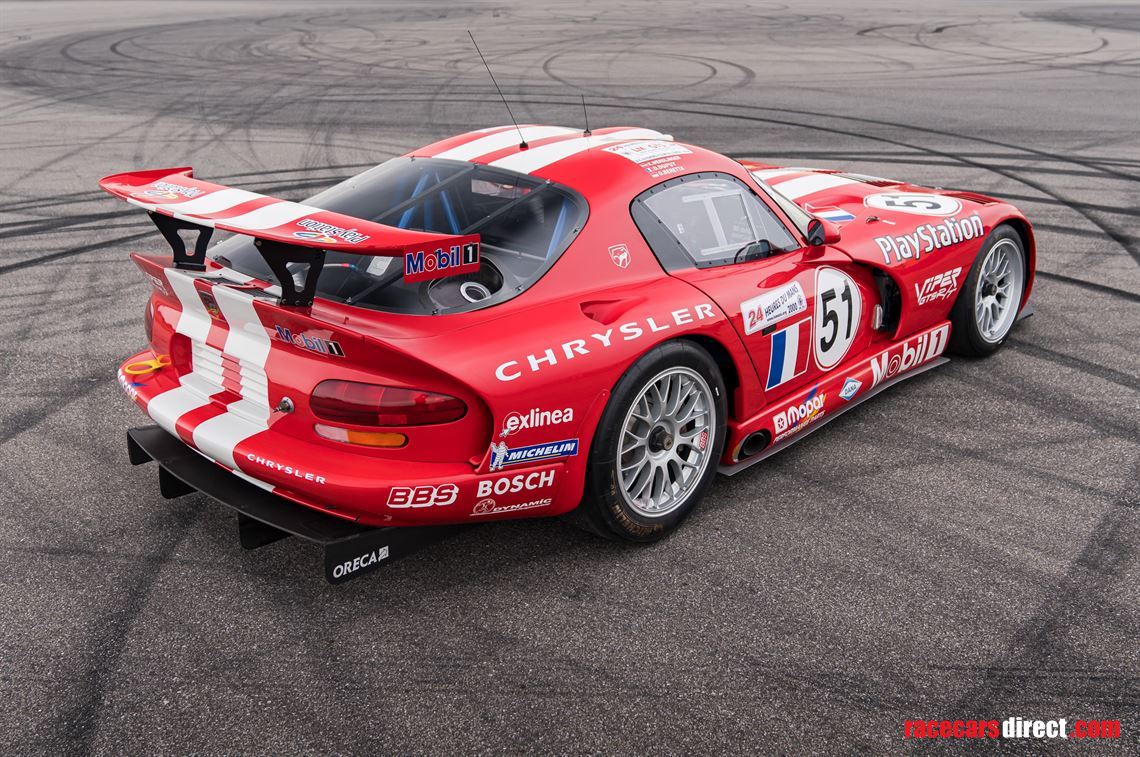 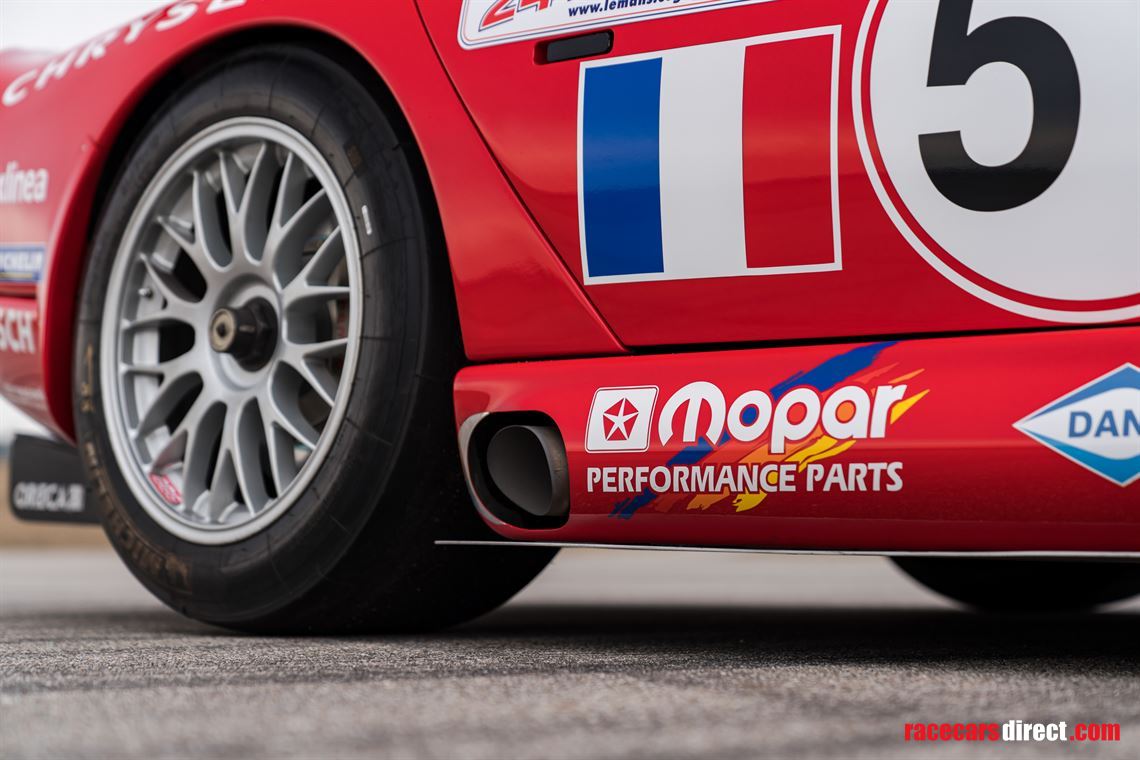 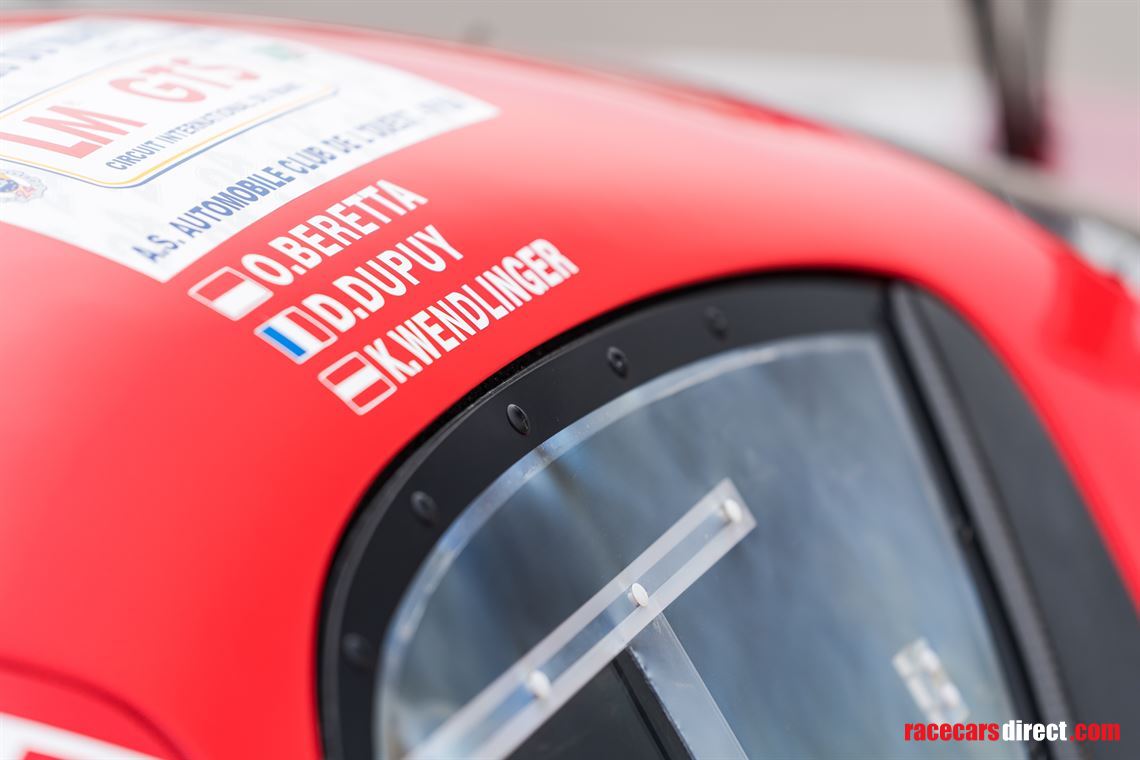 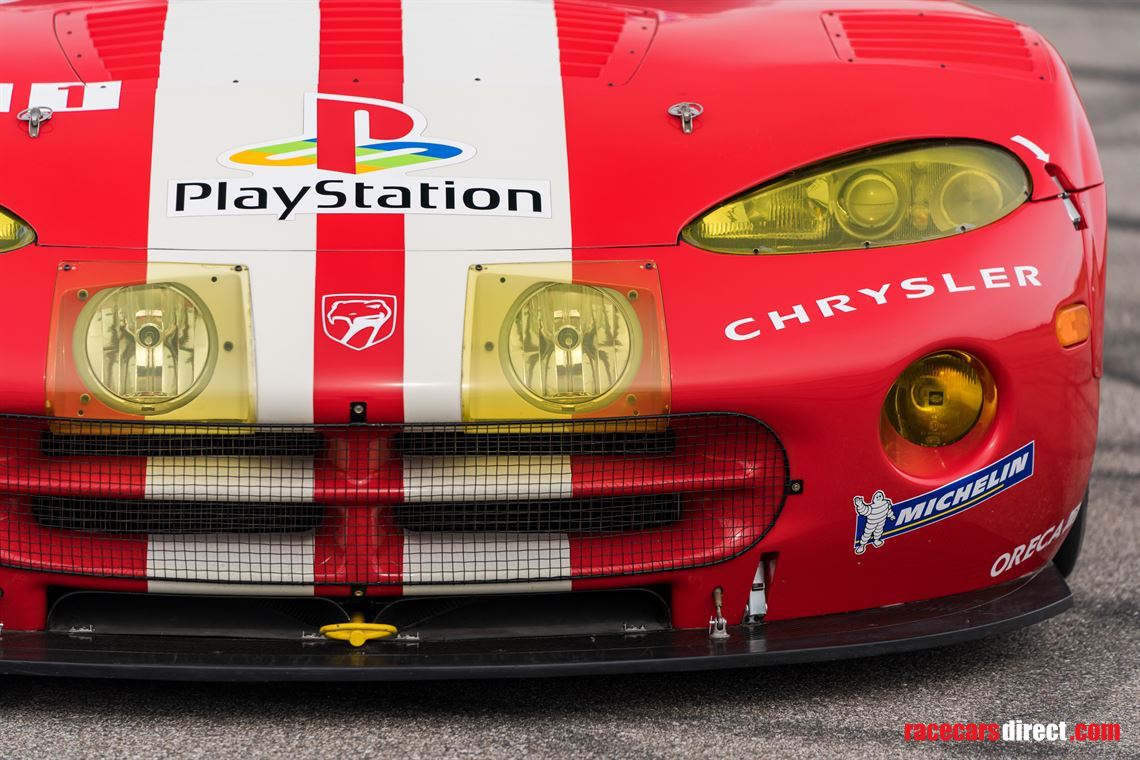 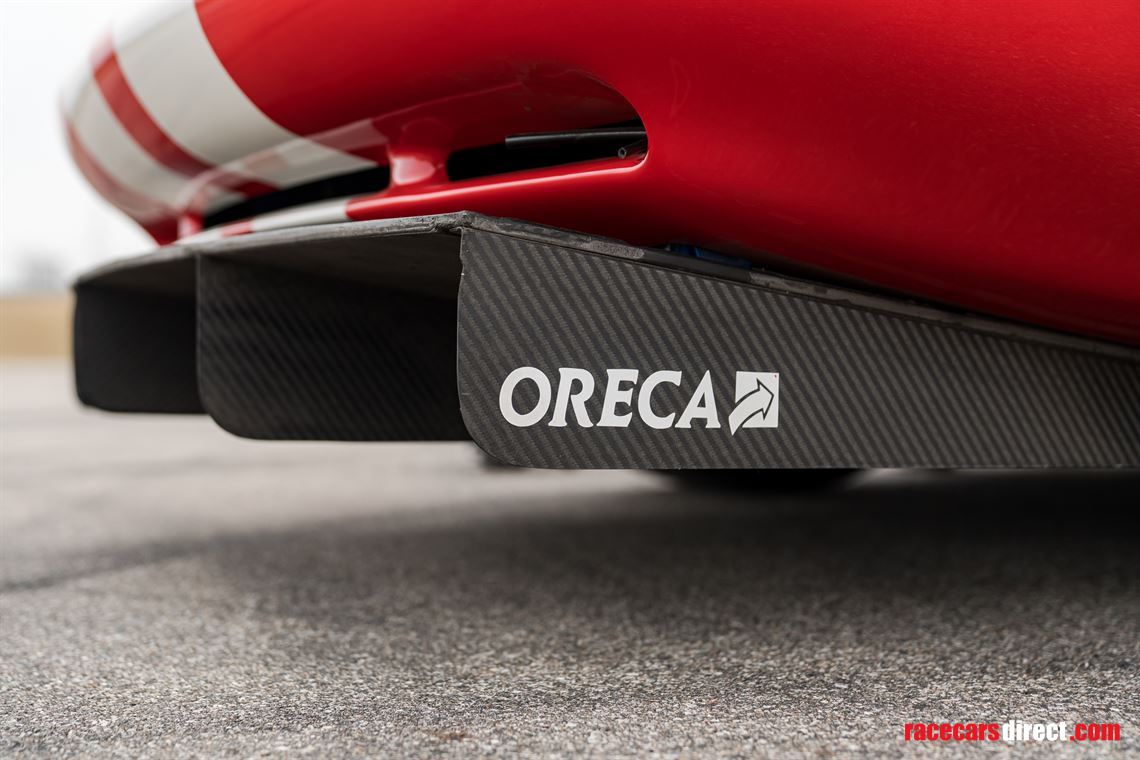 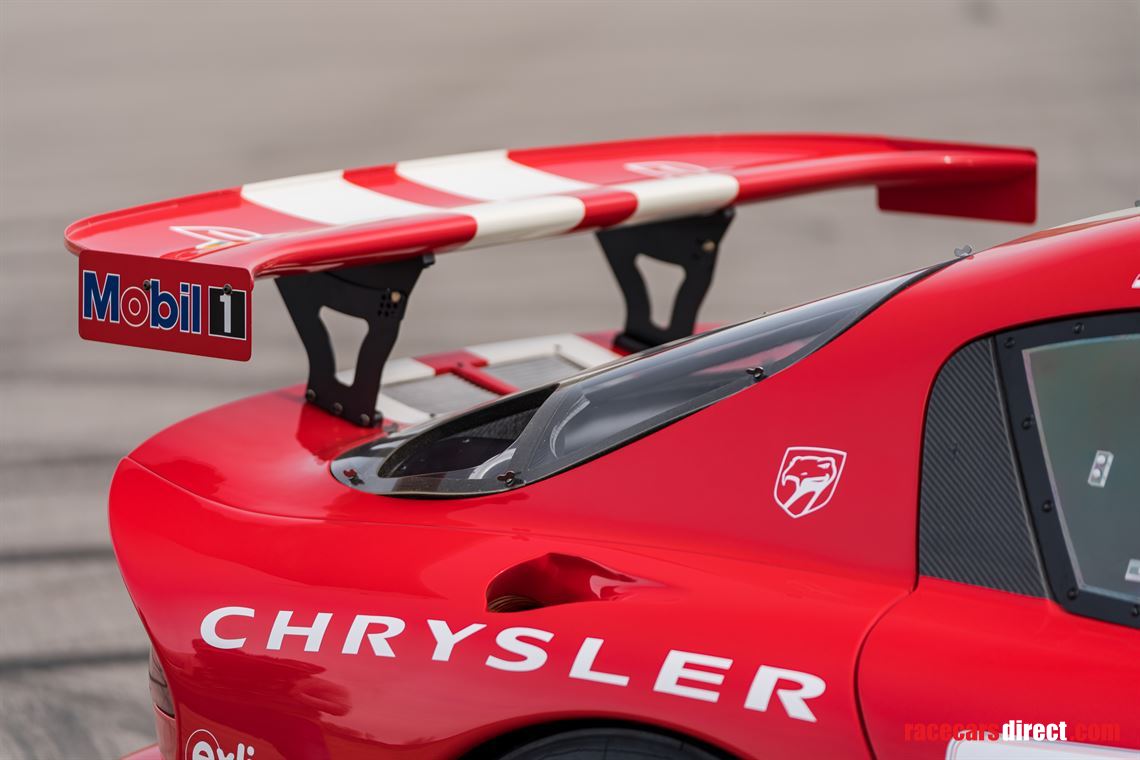 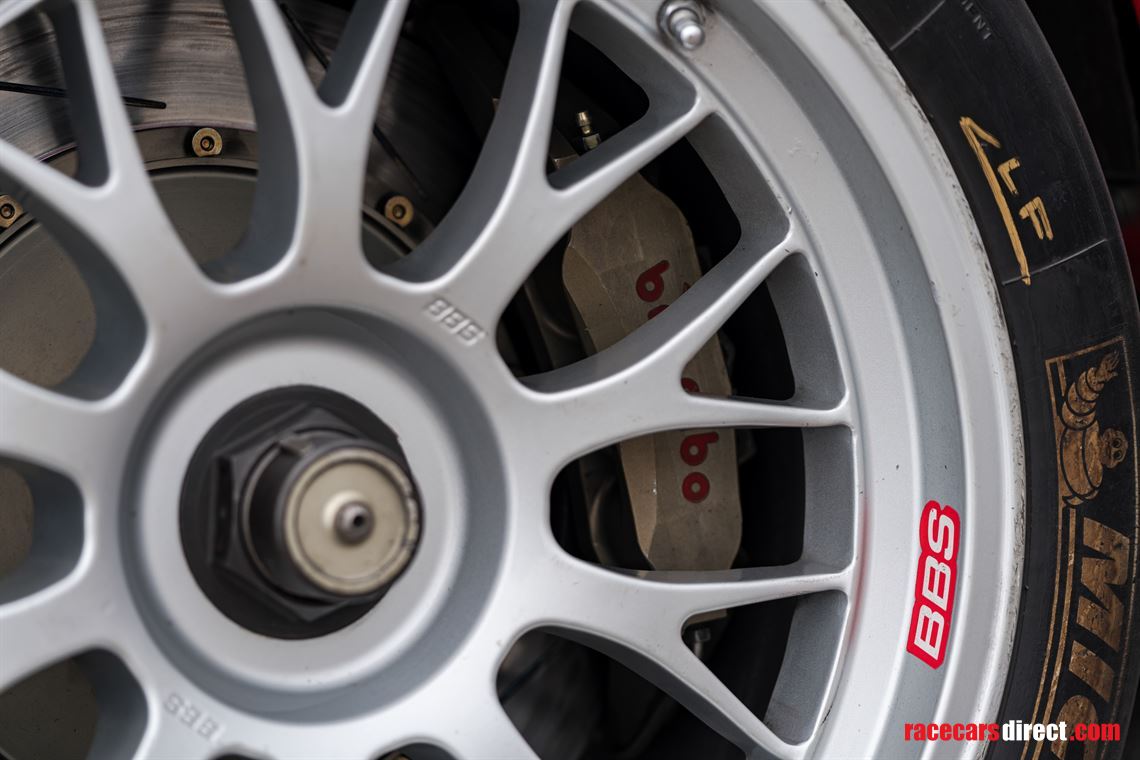 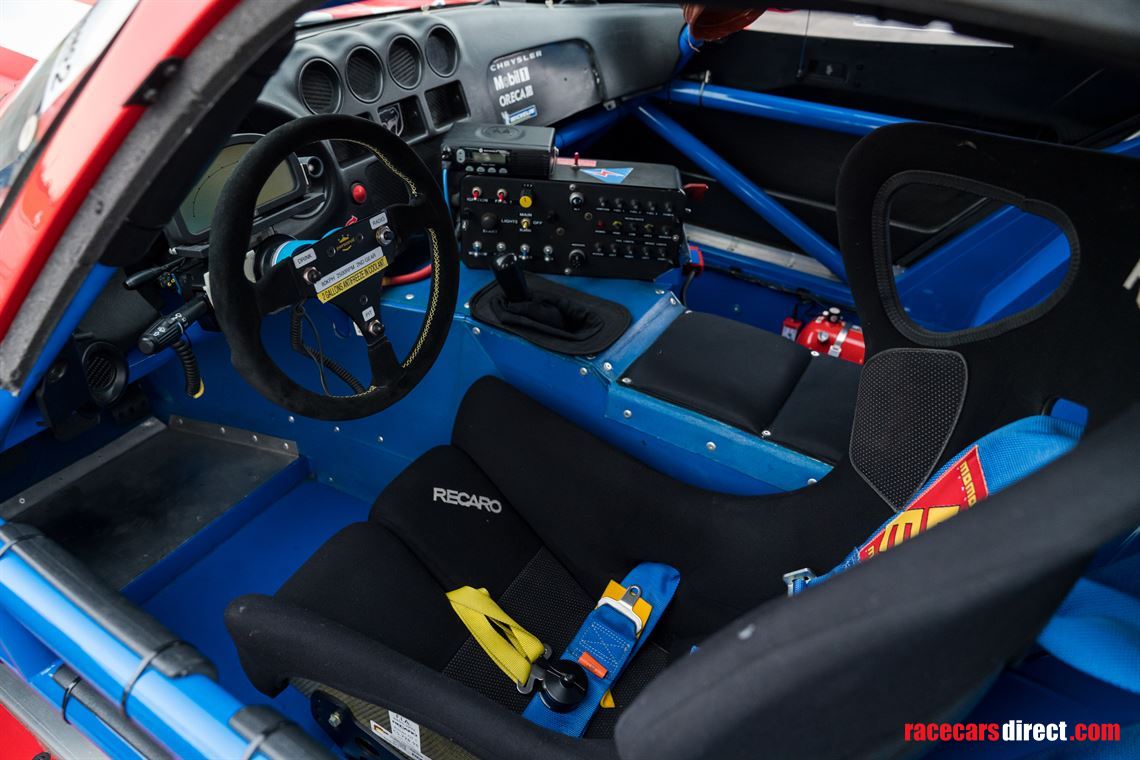 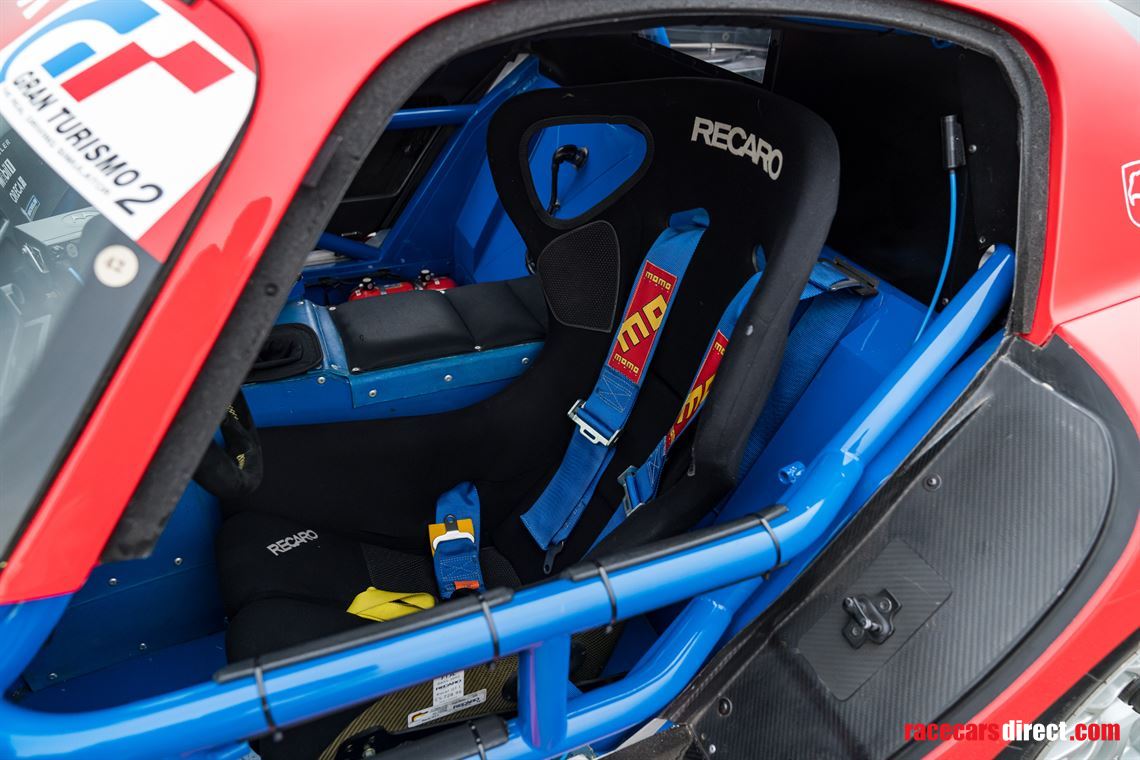 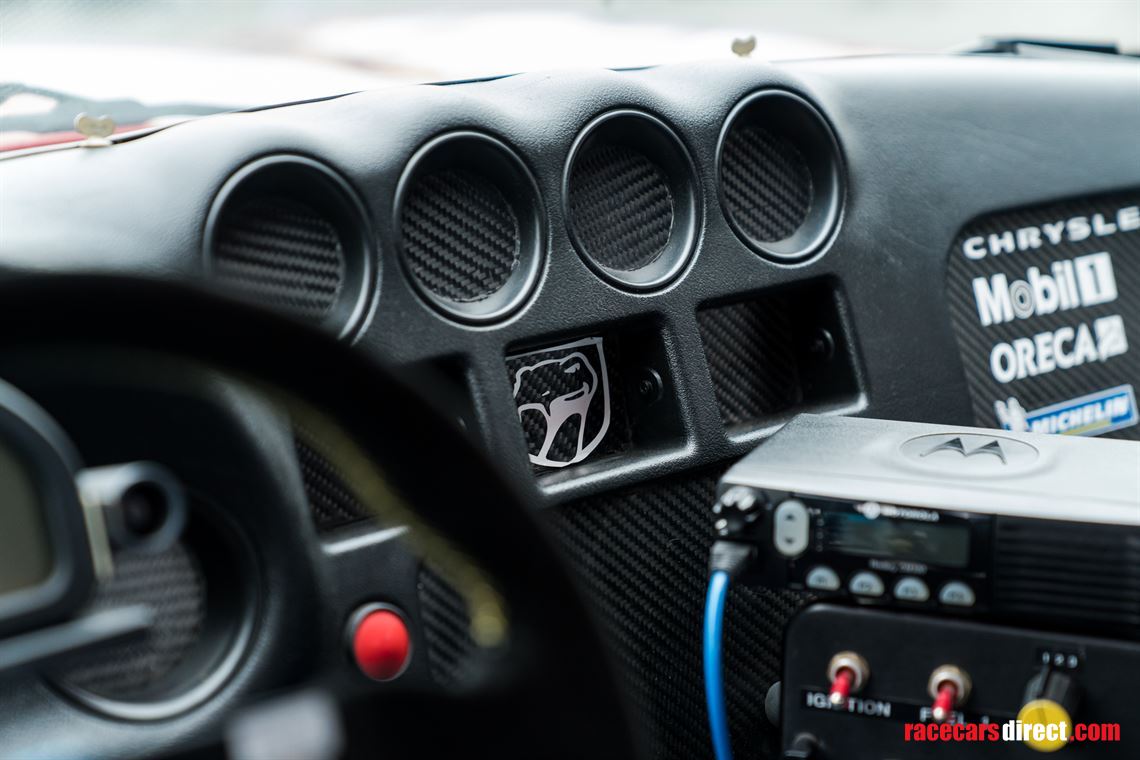 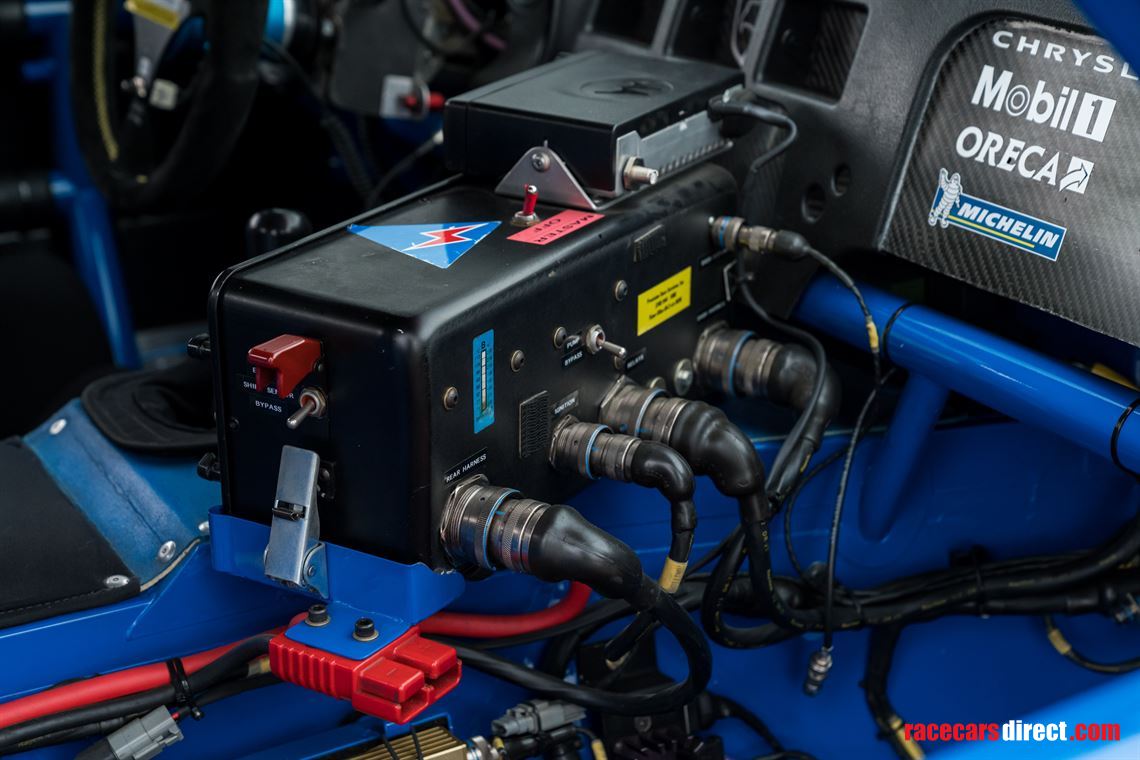 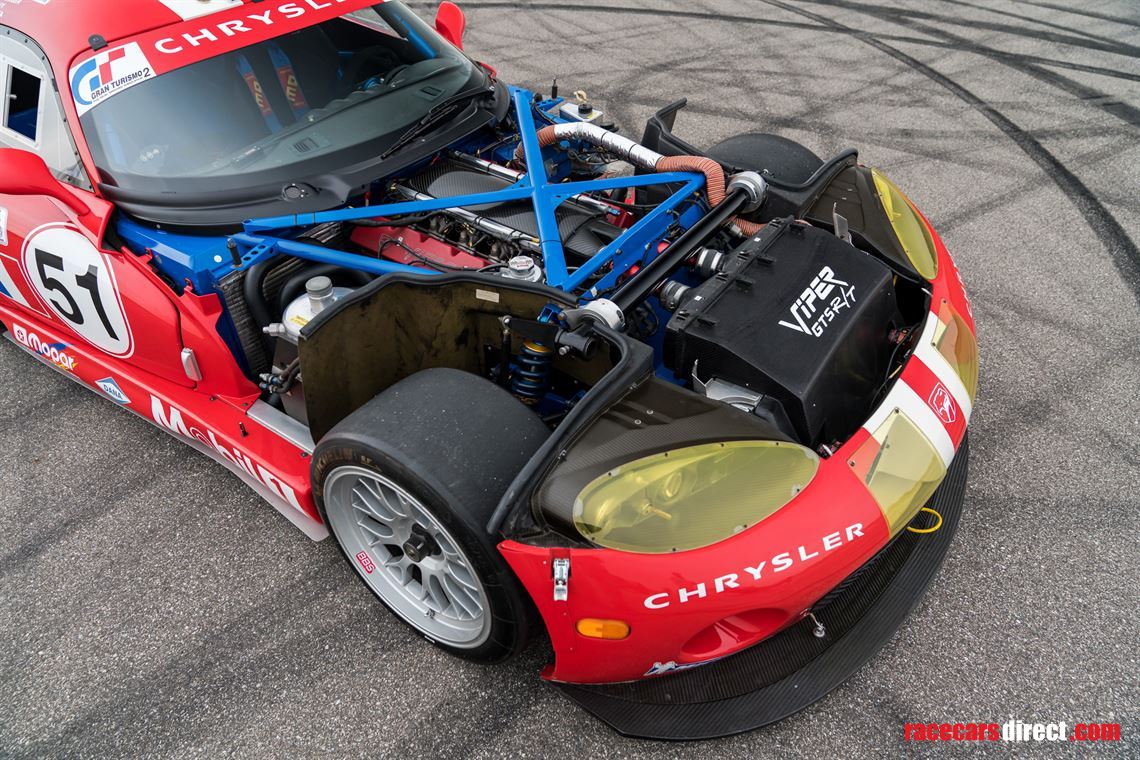 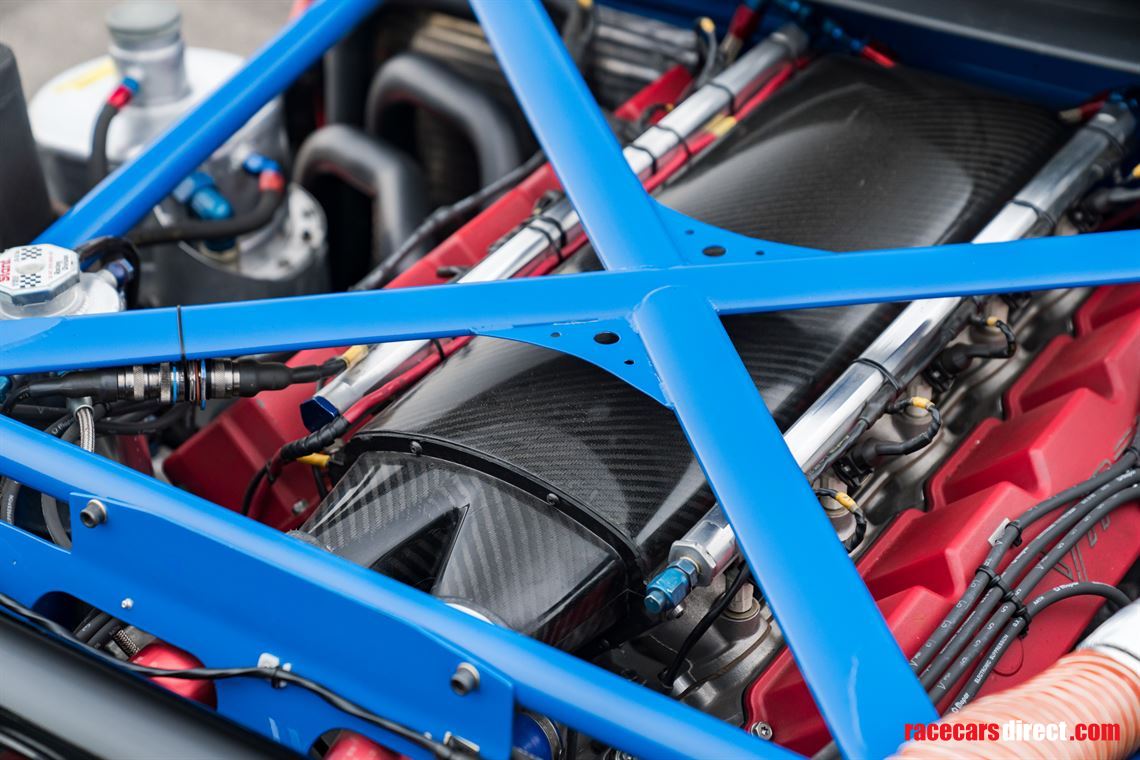 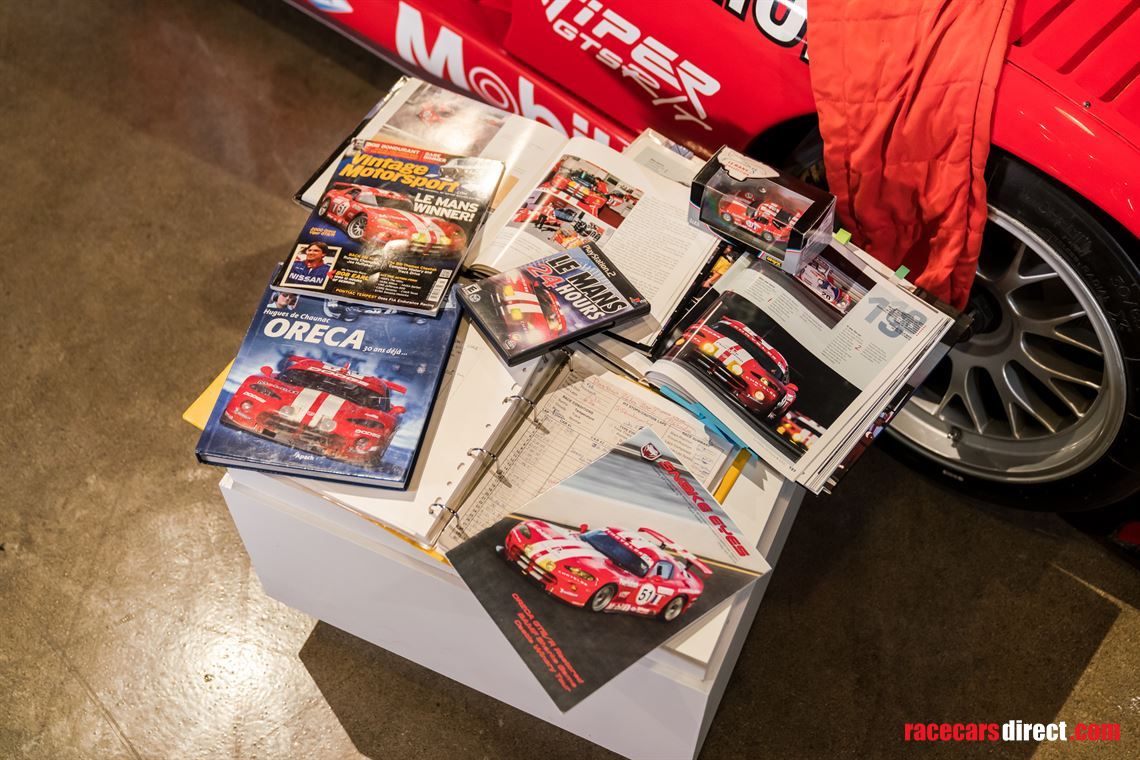 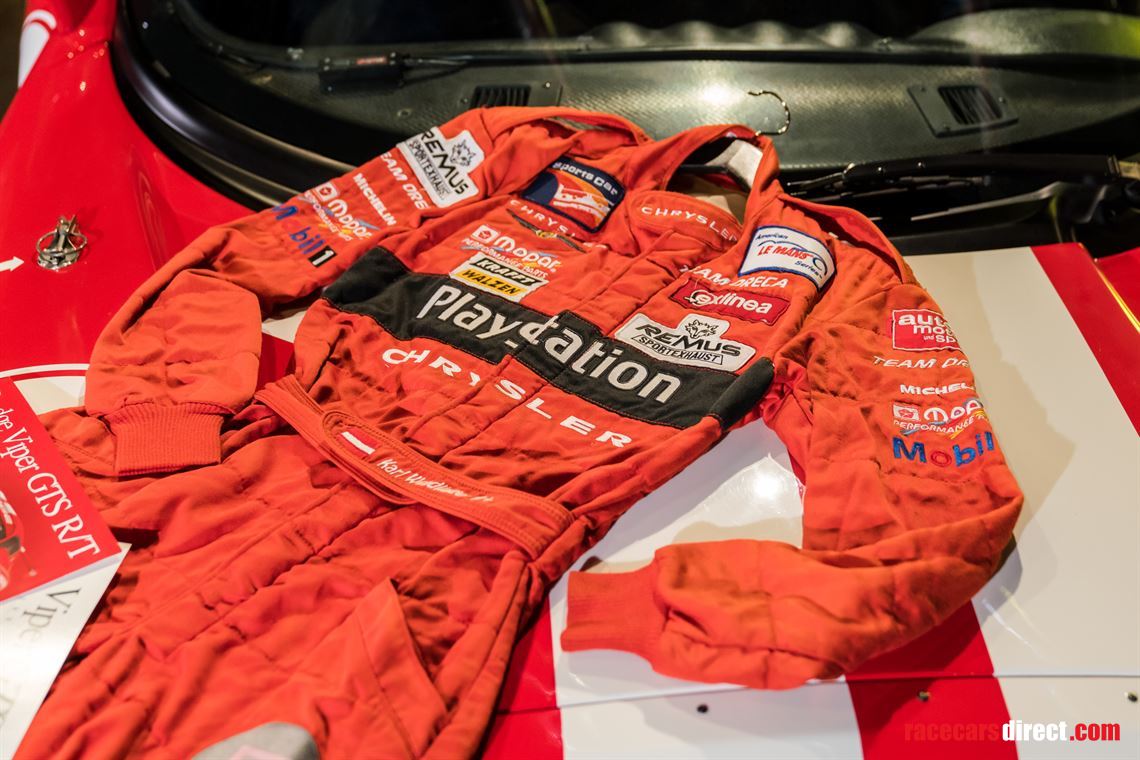 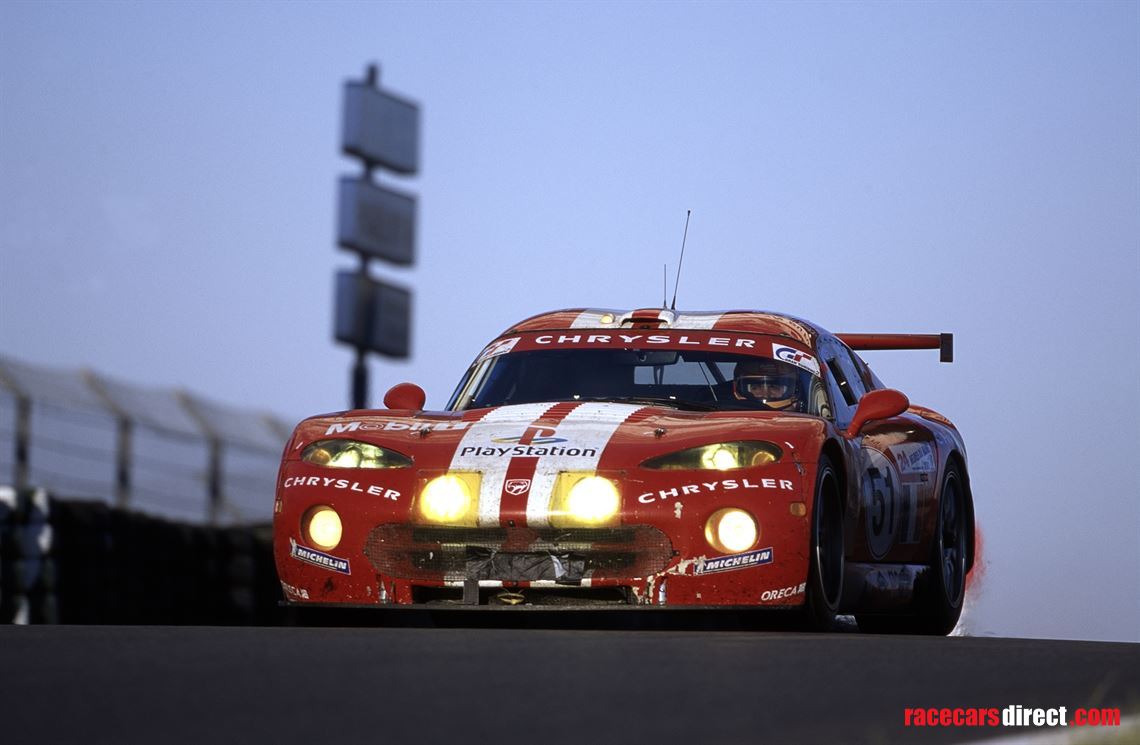 Following an undefeated 1999 season in the American Le Mans Series (ALMS), and repeat success at the 24hrs of Le Mans and the aforementioned yet staggering overall win at the Rolex 24hrs of Daytona, Viper positioned itself as amongst the most successful production-based American sports cars ever. Built-in February of 1999 and prepared for the 2000 season, we are introduced to the vehicle offered here, chassis GTSR C31. It is one of the final Chrysler Factory Works Team cars and differs significantly over customer cars thanks to specialized skunkworks components. Throughout its tenure, GTSR C31 (C31) ran as both numbers 51 and 91.

Campaigned as vehicle no. 91, C31 was fielded by the 1999 ALMS Driver’s Champion Olivier Beretta alongside ’99 Driver’s Champion Runner-up Karl Wendlinger and Le Mans winner Dominique Dupuy for that year’s ALMS. The schedule was greatly expanded upon from the previous season including an additional four races, three of which held outside the US- the ACO’s 24hrs of Le Mans, bookended by ALMS races 3 and 4.

The 12hr endurance race at Sebring on March 18 marked the team’s first pursuit. The result is a class victory for C31, and a 1-2-3 finish for Viper Team ORECA making for a fabulous photo finish in a display of utter dominance by the now legendary team.

The thirteen-mile circuit at the 2000 Grand Prix of Charlotte would be next. C31 would take its class victory, and claim 7th overall.

The third round of the 2000 season is the first ALMS race held outside North America. C31 would once again take a class victory, placing 8th overall.

The ACO’s 24hrs of Le Mans in June 2000 would fit here. Karl Wendlinger, Olivier Beretta, and Dominique Dupuy drive C31 (as car 51) to Viper Team ORECA’s third straight class victory. The 333-lap finish is Viper’s best Le Mans performance to date. Given the serious competition that the Pratt & Miller’ C5R posed, the win is one of the most significant as the pressures to overcome another American-Born racecar deepened the Viper-Corvette rivalry.

The ALMS continued in Europe for Round 4. However, due to it being so close to Le Mans, ORECA would run C35 at this race which took a class win at the 1000km of Nurburgring, placing 8th overall. C31 did not compete here.

C31 breaks its winning streak in Round 5 at Sears Point, albeit marginally. C31 would place 2nd in class and 9th overall behind its sibling ORECA Viper driven by Donohue and Archer.

Round 6 raced Mosport. C31 would take a class win and place 4th overall.

The Corvette takes a class win in Round 7. C31 and ORECA would complete the journey around the Grand Prix of Texas circuit a mere 3 laps below the best Corvette, with a 10th overall placement.

C31 takes the Round 8 class victory at the Rose City Grand Prix in Portland, OR, and places 10th overall.

The 2000 Petit Le Mans took place at Road Atlanta. C31 was in first place and dominated the entire race until an untimely failed battery on the last pit stop caused an unexpected delay resulting in C31 placing 4th in class, and 12th overall.

C31 would claim the title of class victor again and place 8th overall at the 2000 Monterey Sports Car Championship, Round 10 at Laguna Seca Raceway.

The penultimate ALMS race, the Grand Prix of Las Vegas, proved yet again to be a class win for C31 and ORECA, 7th overall.

The 2000 Race of a Thousand Years, an endurance circuit in Australia on New Year’s Eve, was the final of the twelve ALMS races. Uniquely, this is the sole instance of an ALMS race at this circuit. C31 would again take class victory, its ninth instance that season and 3rd overall.

This example was nearly unbeatable winning 7 of 10 ALMS races it entered in the GTS Class. In total, 10 wins throughout the 2000 season for Team ORECA easily gave them ALMS Championship, with 266 total points, capping a three-year win streak. Second place was claimed by the Porsche GT2, 82 points back. More importantly, though, Viper beat its biggest rival, the factory-backed Corvette C5-R, by a staggering 130 points. History was written in dominating fashion but all good things come to an end. 2000 would be the last year of the factory-backed Team Oreca Vipers. C31 is widely regarded as one of the winningest Viper’s in history and is arguably one of the most significant race cars of our generation.

The Chrysler-backed Viper racing program officially ended in 2001. A year prior, Chrysler and ORECA had begun work developing an LMP class vehicle which resulted in ORECA abandoning their Viper teams. Of course, Vipers would continue to campaign under a multitude of private groups.

In 2001, C31 was left overseas and as it would turn out was accidentally sold to the privateer team, Brookspeed in the UK, most likely approved for sale by someone under the Daimler side of the company that didn’t care about a used up American race car. This would turn out to be a massive oversight by someone who surprisingly must have been unfamiliar with what the Viper had just accomplished. For two seasons, Brookspeed would campaign GTSR C31. Records show C31 achieving a 2nd place finish at Donington in 2001 before returning to Daytona in 2002, for a 6th in class result. Modifications were kept light, but later became significant in order to remain competitive. In 2005, the car retired and was placed in storage.

A well-known personality in the vintage and historic racing industry, Richard Freshman of Fossil Motorsports Inc., was on assignment when he “discovered” C31 years later. The original intent was to find one of the very few 1971 Hemi Cuda Convertibles to fulfill a rare Mopar requirement of a private collection. Instead, he crossed paths with this special Viper and consummated the purchase on behalf of one very lucky collector. Freshman, under order of his client, then directed the total chassis up restoration. He consulted with the likes of Terry Scarborough of TS Racing who serendipitously had Florent Boisseau, team member of ORECA c.2000, under his employ. Consultation with ex-driver, Karl Wendlinger resulted in a restoration that modeled and mirrored the car’s 2000 Le Mans Winning mechanical specification and livery. Receipts on file reflect in excess of $500K – a considerable sum resulting in a show-winning, concours and race-ready rebuild.

From then on, this successful Viper has lived a pampered and somewhat sheltered life. In 2009, appearing alongside a Ferrari 375mm, it was a participant at the Avila Beach Concours d’Elegance. Bound to be welcomed at events worldwide, C31 is eligible at the Le Mans Classic, Sebring Classic, and Daytona Classic as well as a variety of other events.

Today, the never wrecked C31 retains it’s original subcomponents, chassis, suspension, coachwork, motor, gearbox, and drivetrain. It is accompanied by significant documentation and spares and is regarded as one of the winningest Viper’s in history. Perhaps more importantly, C31 carries with it a more abstract attribute. It should be said that this Viper has had a profound effect on the cultural life of the motoring world today. Its 2000 Le Mans-winning livery is the very same that was digitized for Sony Playstation’s Gran Turismo 1, 3 and Le Mans video games. In the game, when selecting a simulation Viper GTS R to race digitally at Sebring, it’s chassis C31 you’re using. Both Gran Turismo titles are renowned as two of the greatest and most far-reaching video games of all time.

It could be said that C31 is the most important American sports racing car in contemporary history. If not, then it is certainly the most relevant.

A car such as Chrysler Corporation’s GTS R, with its in-house styling, gives credence to a similar theory of European design but reflects a more peak development. It is the collaboration and the melting of minds across a multitude of firms. It is hard to overstate how radical a car the GTS R was for Chrysler in the 1990s. Here was a company best known for minivans and front-drive compacts producing an all-out super sports car in the classical sense which went on to win at the highest levels. The Viper GTS R represents the last great vehicle development program in automotive history. It is a program that should have never happened, will never happen again, and yet, as aggressive as ever, the GTS R soldiers on as an unabashed example of how supercars are built in America. In this decade, nearly thirty years post-design, these GTS Rs continue to deliver a remarkable array of possibilities as they were campaigned in period at Le Mans. They are both beautiful and eminently usable.

Today, the great masters remain in the highest of institutions. The Simeone Foundation in Philadelphia, PA retains the sole remaining 1921 Duesenberg, which raced the 1921 French Grand Prix, the year of the first international win for an American car. Simeone, too, retains the most original Cobra Daytona Coupe and Le Mans raced GT40 MKii. As younger generations of car enthusiasts grow old, it will be the legendary Viper GTS R of this glorious time period that will be welcomed alongside the aforementioned cars above in commemoration of America’s continued racing success abroad.  By 2001, ORECA had as much as three class wins with the Viper at Le Mans and a championship on both sides of the Atlantic.

Now in the 20th Anniversary of its championship, Viper C31 is offered to the public. Of the three Le Mans winning Vipers, Chassis C7, victor of the 1998 Le Mans, is owned and maintained by Chrysler residing in their private collection and will never be sold. Chassis C22, the 1999 victor, is in a private collection overseas and will also likely never be sold. It is this car, GTSR C31 with it’s all original drivetrain, the sole Le Mans winning example in private hands in the United States, regarded as one of the winningest Viper’s in history, that is now available to the public.

Looking for parts for my Oreca Viper GT3, all parts of interest.