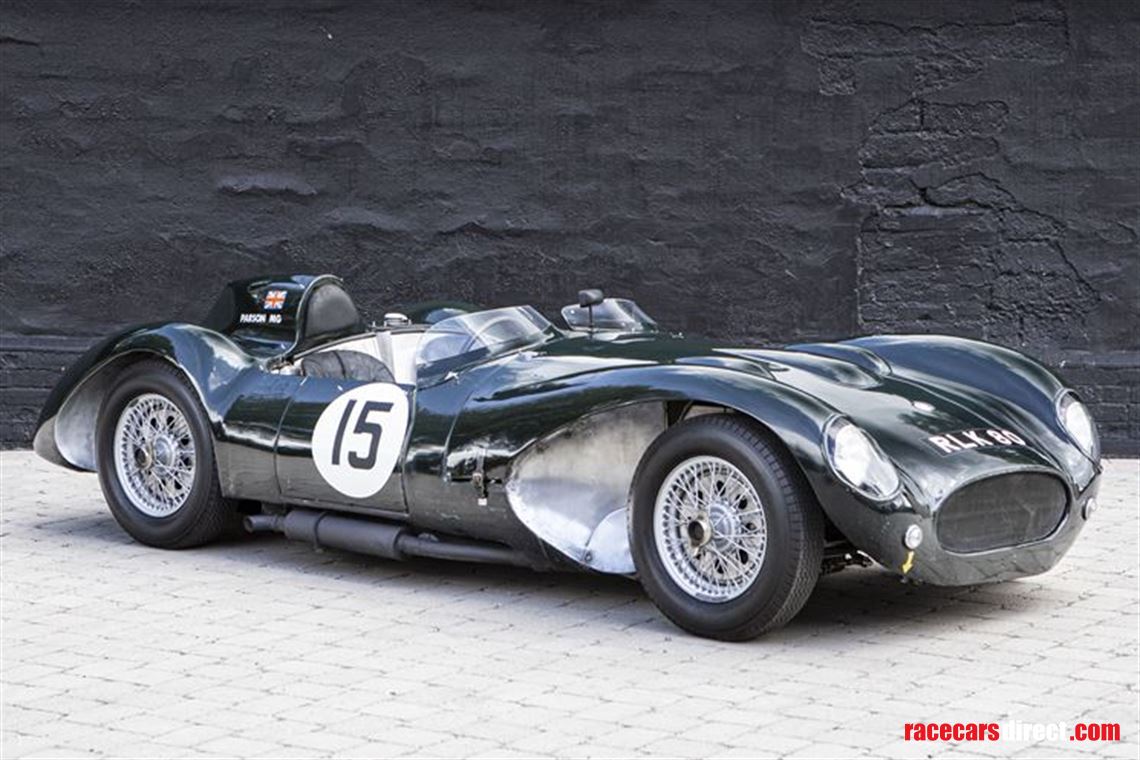 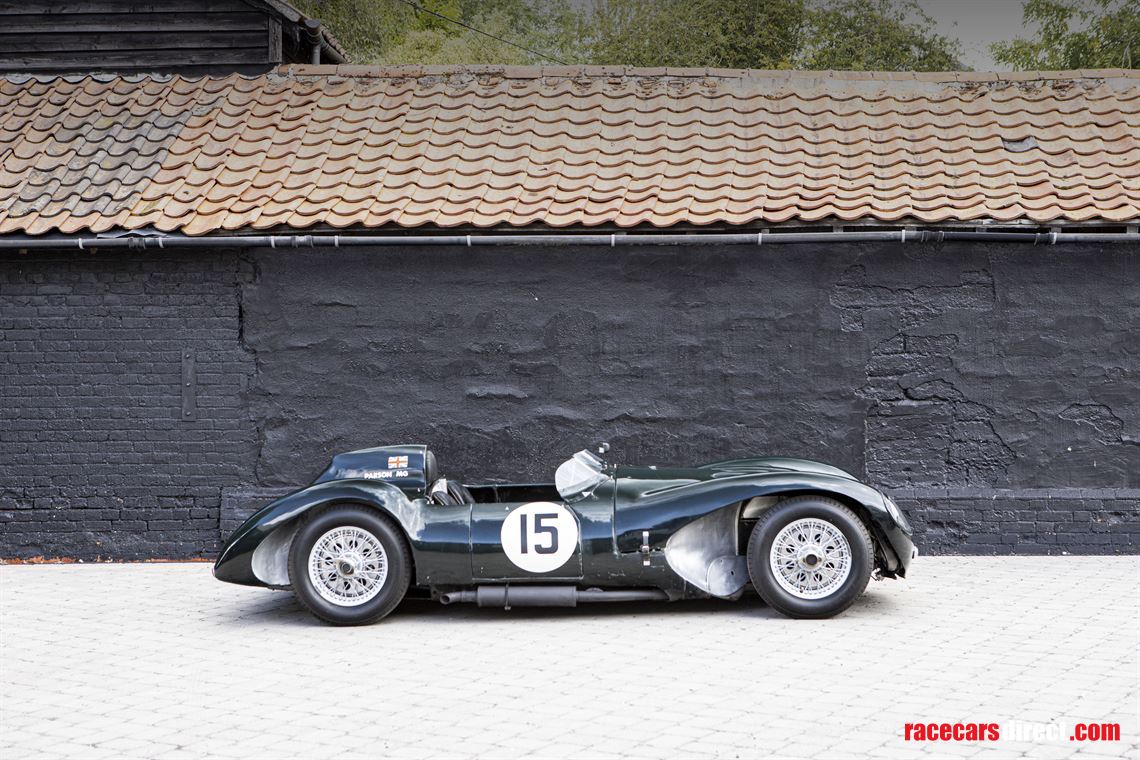 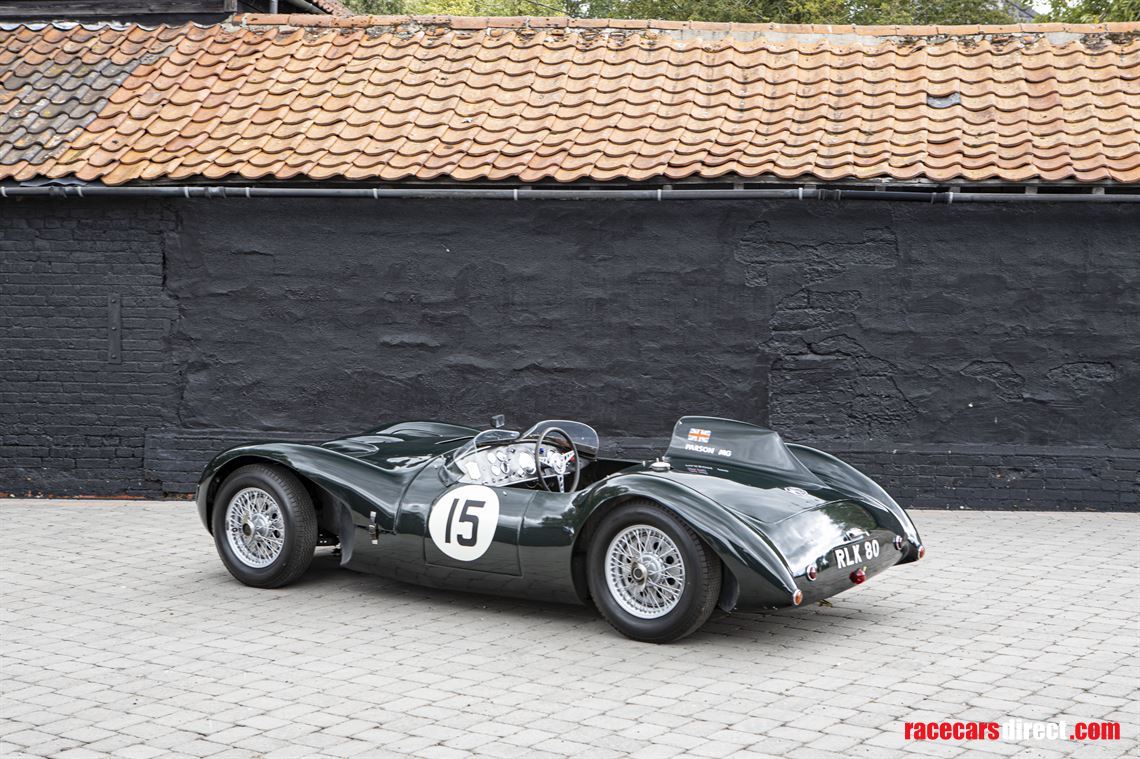 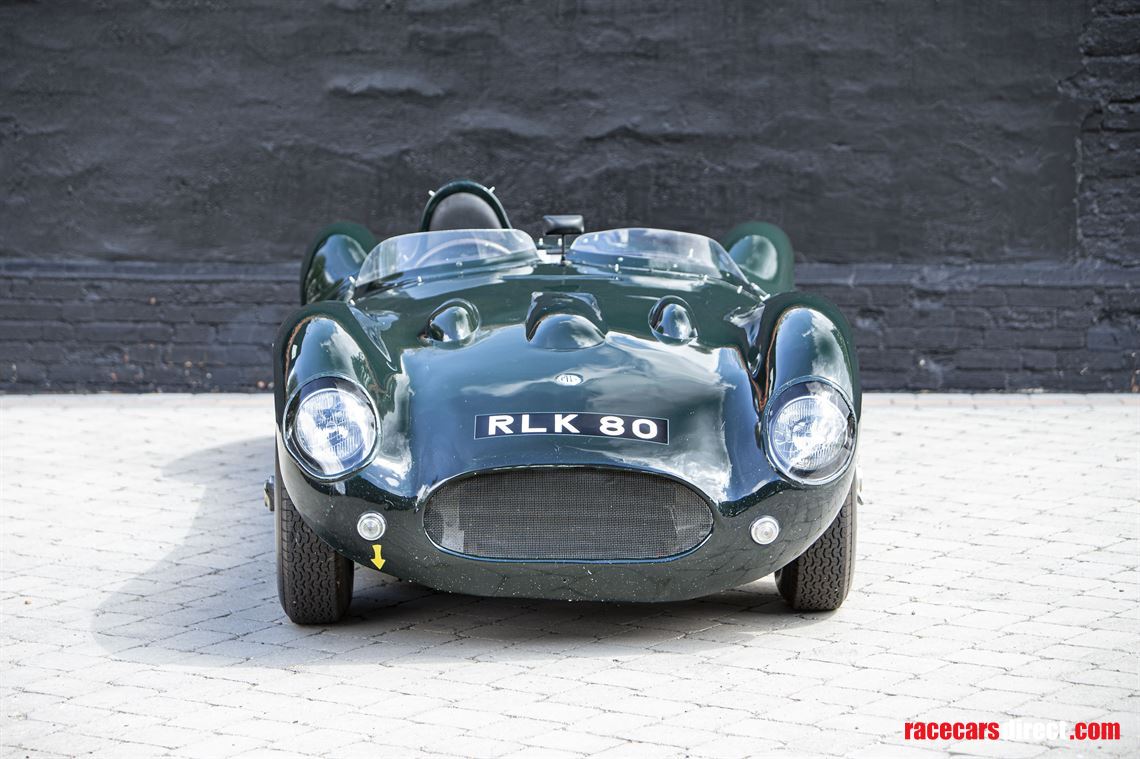 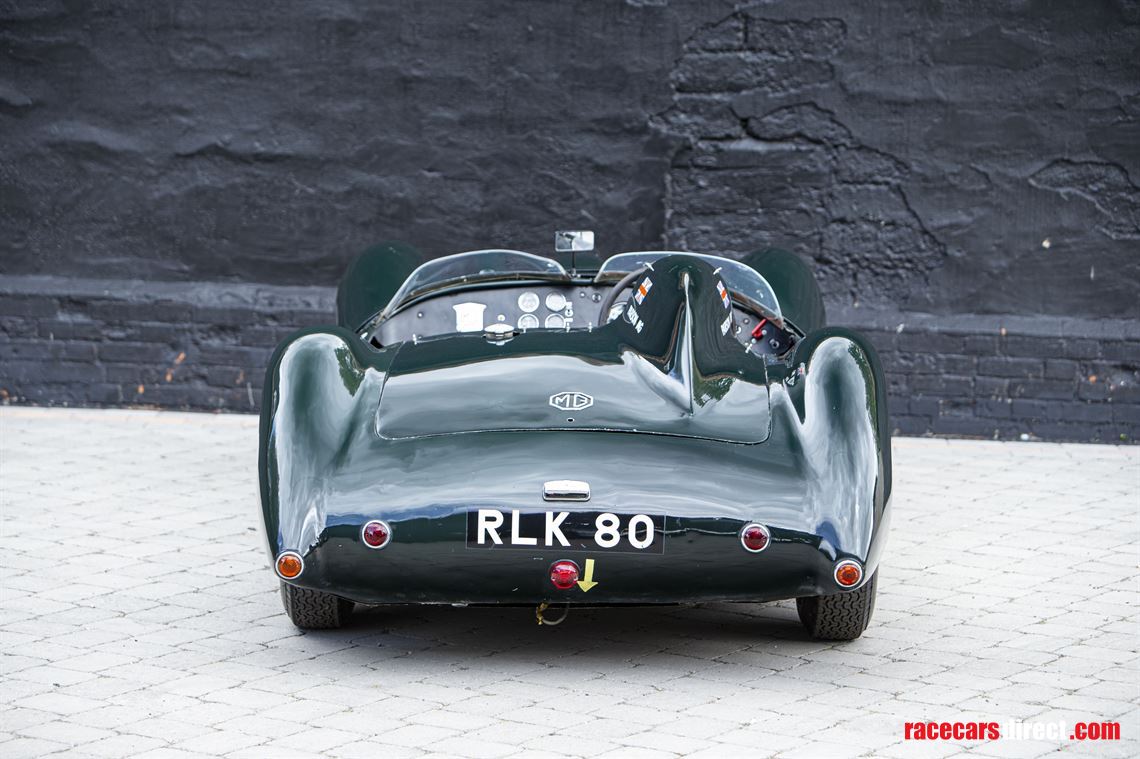 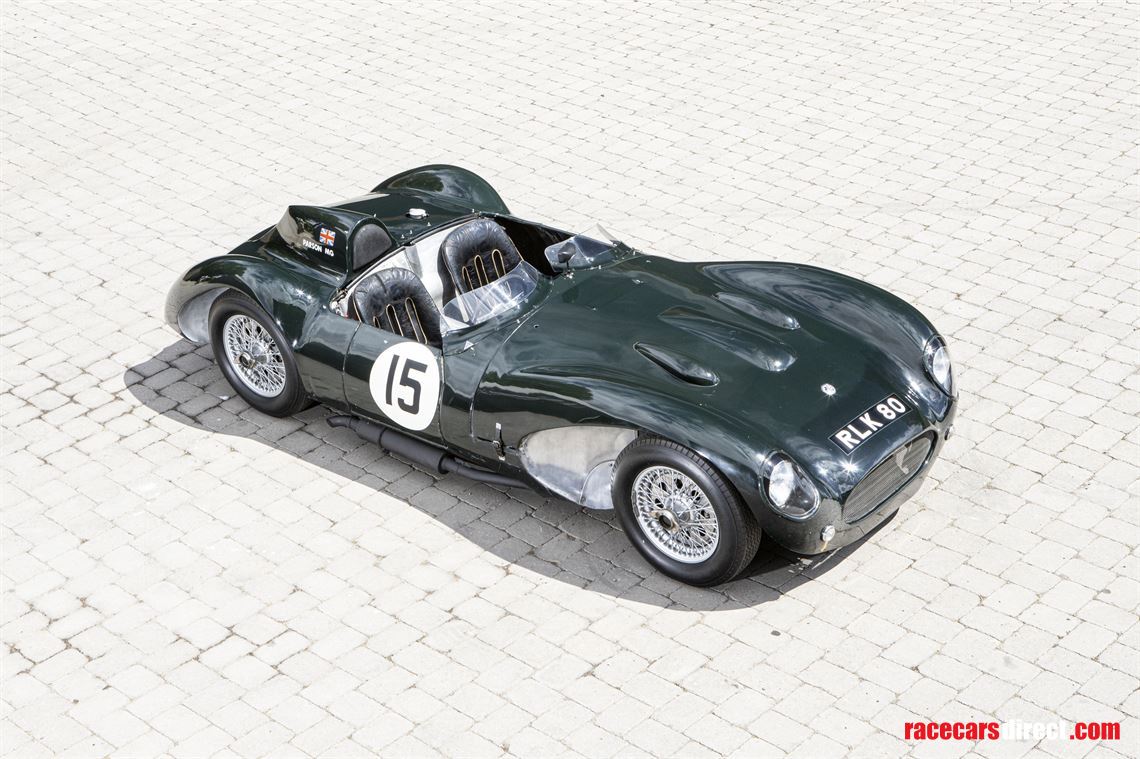 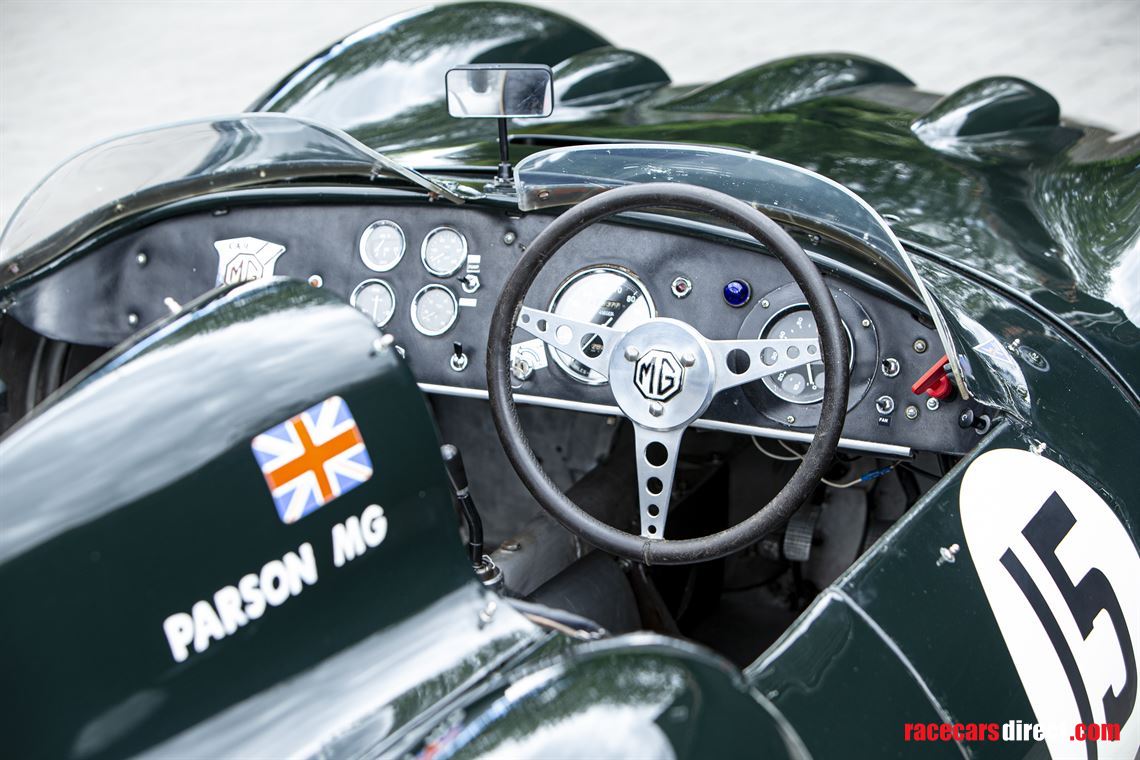 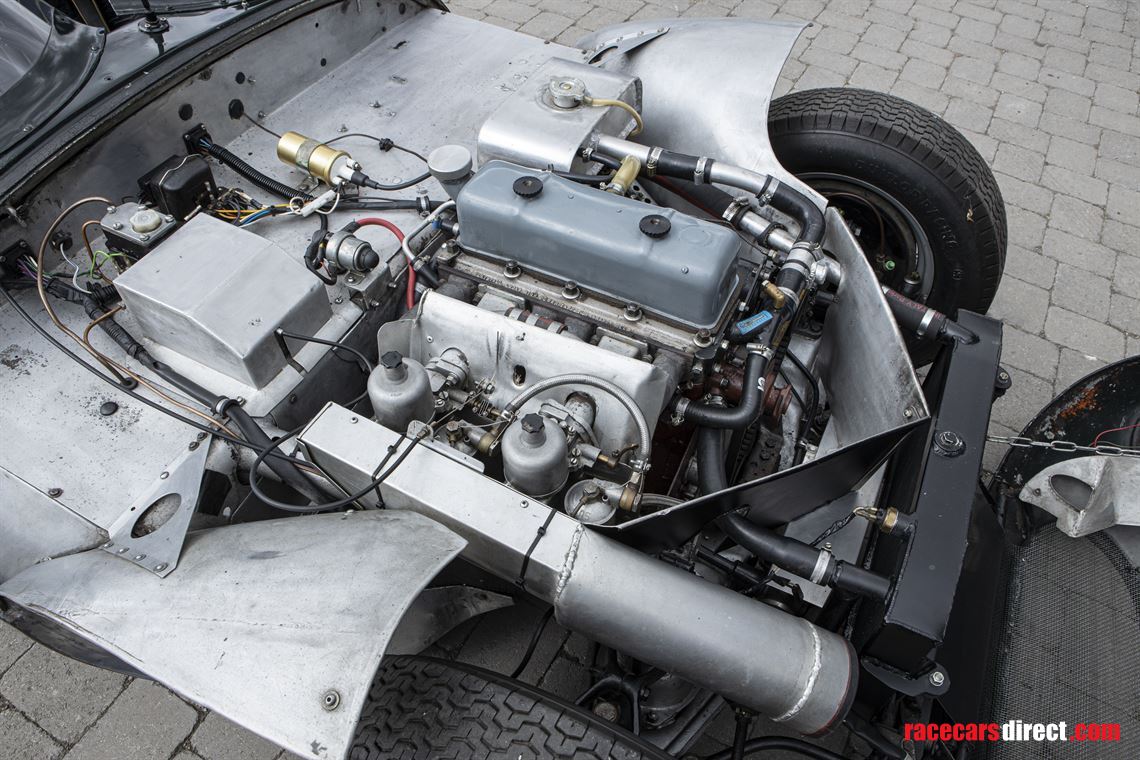 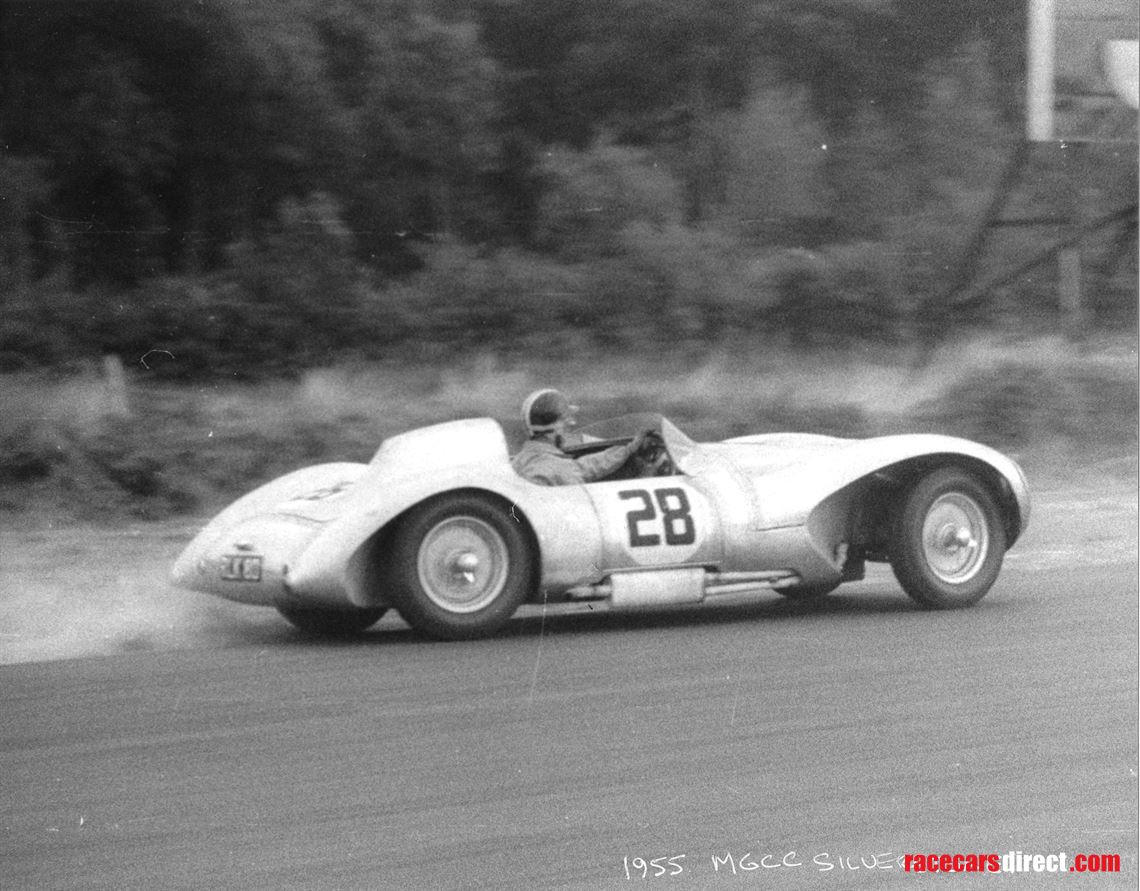 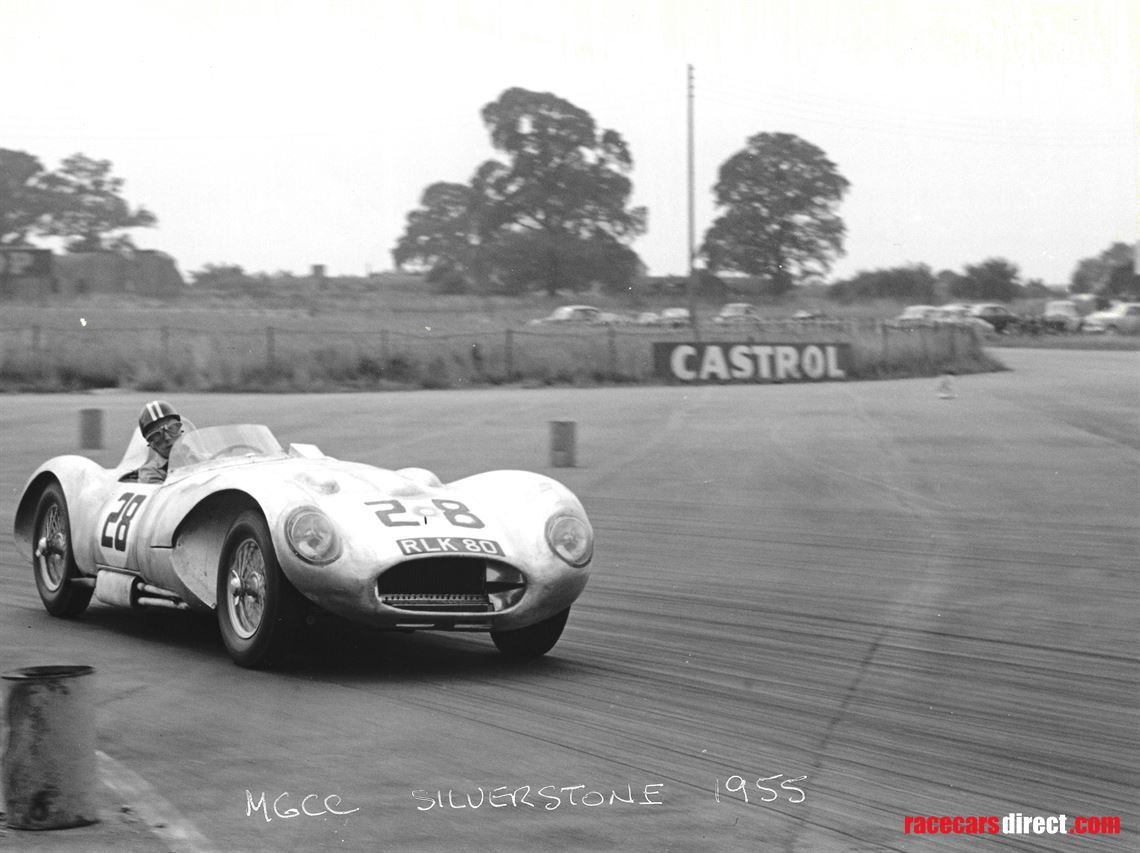 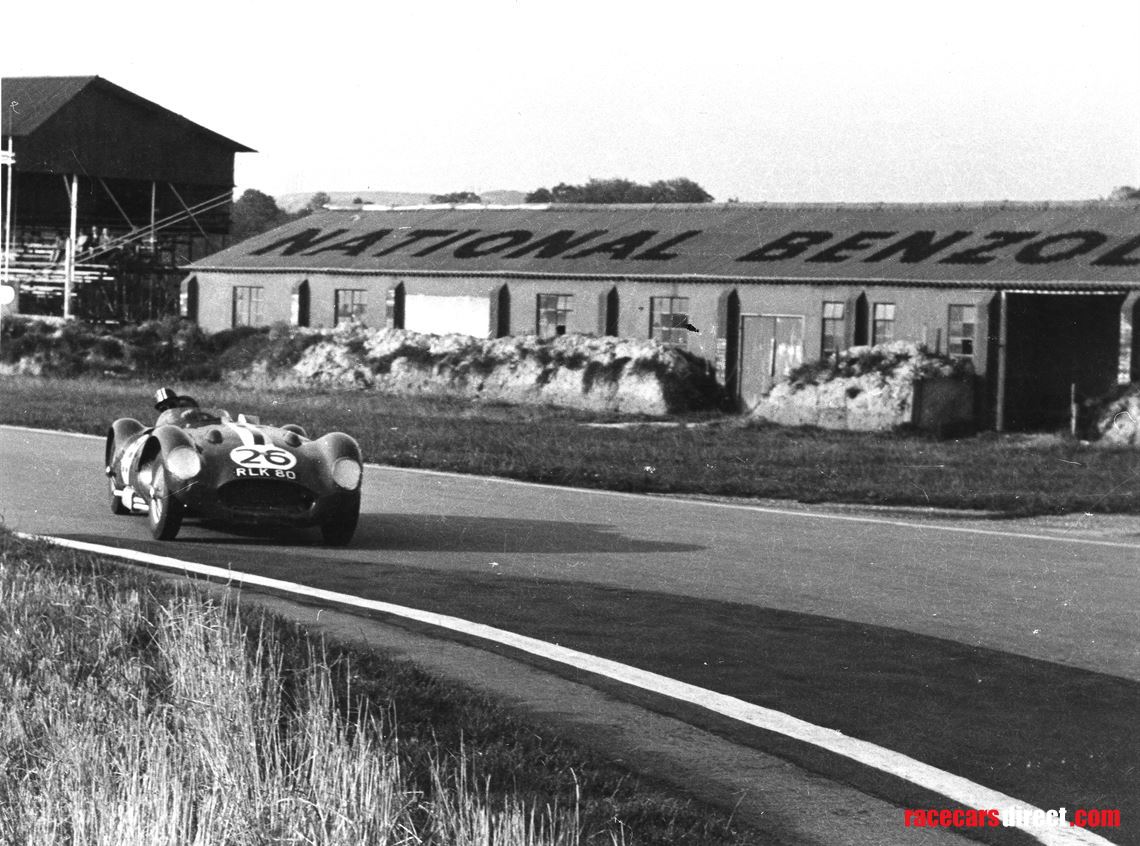 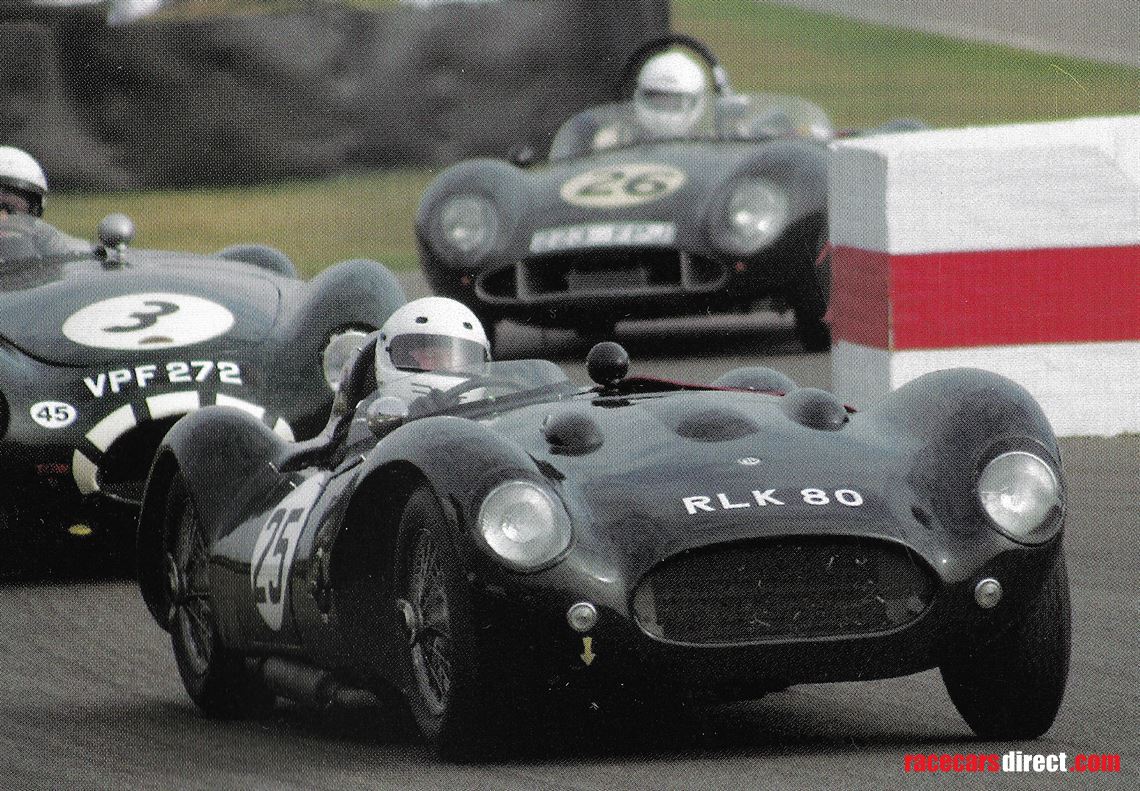 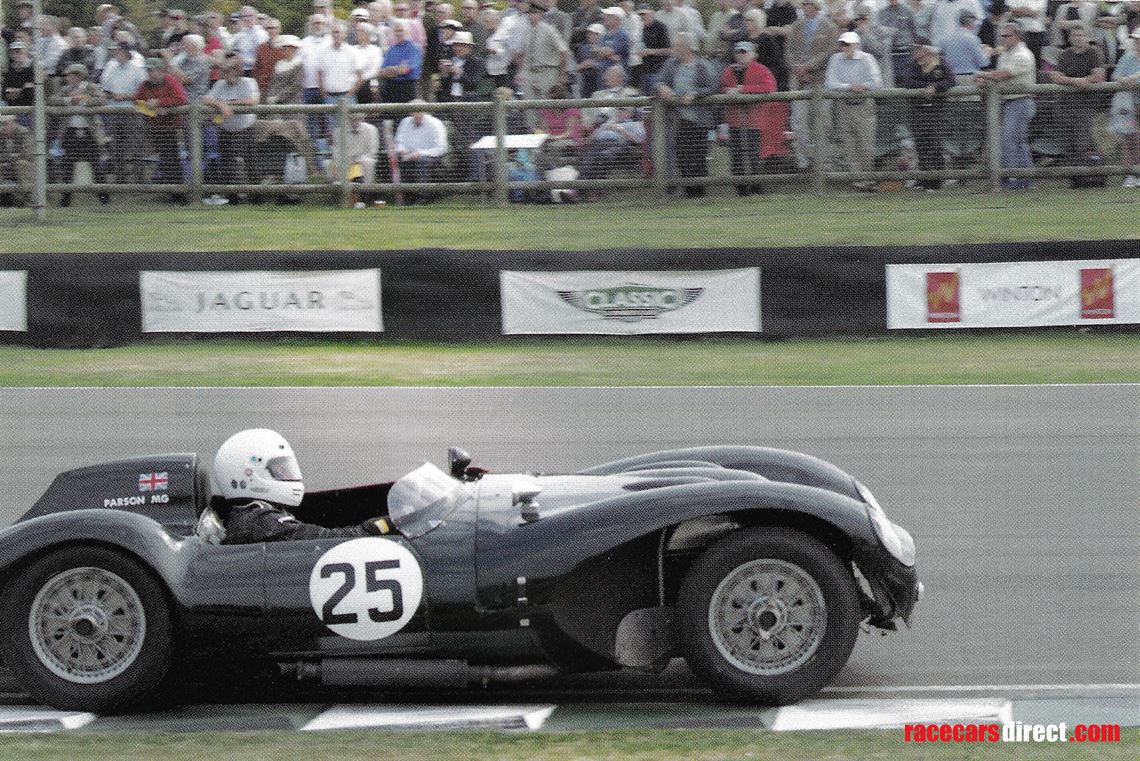 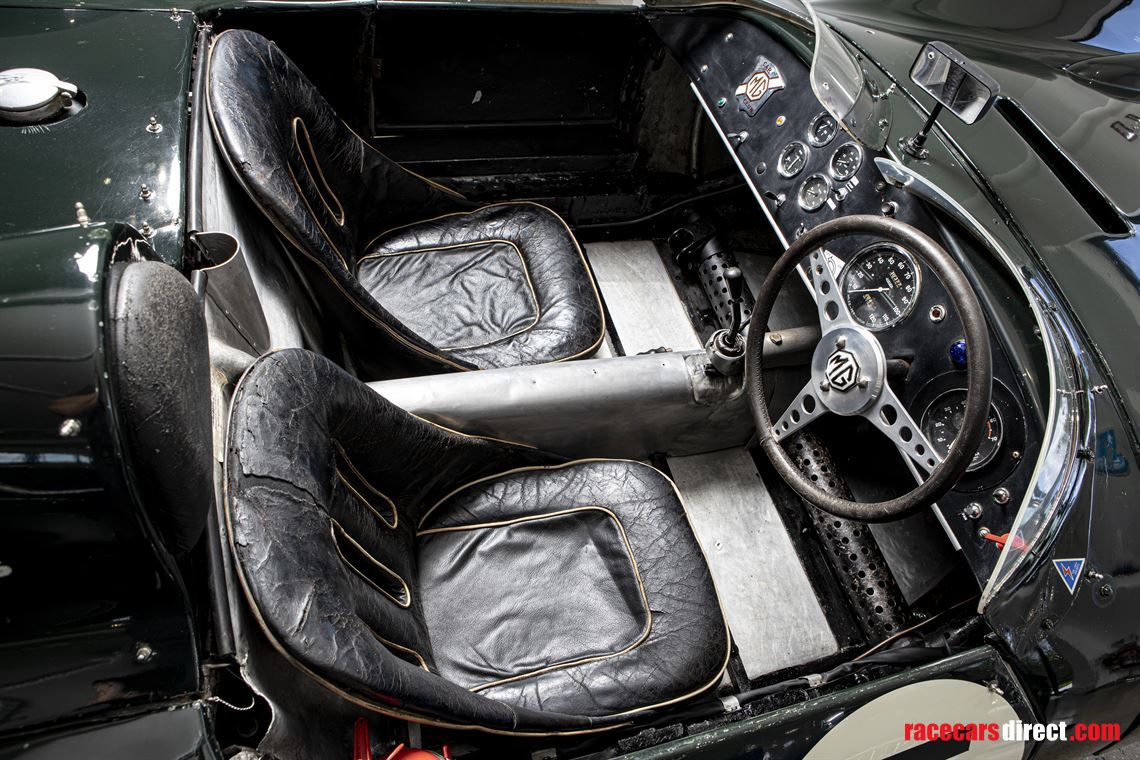 Like many people his age 20 year old Stuart Young dreamed of racing at venues such as Goodwood, Silverstone and Brands Hatch. Unlike most of his peers however, Stuart was in the fortunate position of having a father who was mad keen on racing having competed himself at Brooklands and having a successful family engineering business Weldandgrind that did a great deal of work for firms such as BRM and MG. It was through this that he was able to make his dream a reality and create the Parson MG sports-racing car.
It was via the company business connection with MG that Stuart was able to acquire the chassis design that the Parson is based on, it being an MG competition department prototype that never went into production, this being a quite conventional ladder type tubular chassis. The grade of steel used for this was uprated from that specified by MG to save weight and weight saved as far as possible throughout the construction. In order to keep the car competitive with lightweight designs from Cooper and lotus. The front suspension is MG TF lightened and fitted with an anti-roll bar, rear suspension is by quarter elliptic springs, radius rods and a Panhard rod to  locate the MG TF axle, brakes are 11 inch with Alfin drums. Gearbox is courtesy of Abingdon once again being a TC unit.
The bodywork on the car was constructed in aluminium by the highly respected firm of Peels of Kingston upon Thames, who did a lot of the bodywork for Cooper, early McLarens and were responsible for much of the replica Bugatti coachwork made in the UK. As such the body on the Parson is manufactured to the highest standard, whilst taking styling cues from contemporary Ferrari, Maserati, Jaguar and Aston Martin and is to our eyes most elegant.
The engine was again courtesy of the family’s close business ties to MG it being one of a small batch of special competition 1500cc blocks cast  without the water passages to the cylinder head, to allow a higher state of tune to be run, this block is still retained in the car today.
Given the nature of the cars construction- the fruits of a family business, the name given to the finished article was entirely appropriate- Par-Son, although on occasion it was entered as the Weldandgrind MG to give the firm a little extra publicity.
Once completed the car was used enthusiastically and competitively at circuits such as Goodwood, Silverstone, Brands Hatch and Snetterton at both National and International level, (see race programmes and race reports on file) achieving class and race wins and proving competitive with contemporary Lotus and Cooper offerings, during the 1955 and 56 seasons.
For 1957 the Young family decided to turn away from home grown Abingdon power and invest in a Maserati 150S engine, to house the new power unit a new car was built so the decision was made to sell the Parson MG, see advertisement in the September 1956 issue of Autosport.
Surprisingly it is not believed that the Parson did any further competition activity after it was sold by the Young’s, which is perhaps why it has survived in such largely un-modified order
The original buff logbook on file shows subsequent owners to be- Bob Delaporte 1957, Peter Glenn 1960,Thomas Rayner 1962, Paul Glen 1964, Stephen Welham 1969 and Keith Hodder 1975. By this point the Parson was in need of restoration and fortunately in Mr Hodder it had found a custodian that recognized its importance and was able to restore the car to its original condition. Mr Hodder also researched the car history assiduously, making contact with Stuart Young and re-uniting him with the car.
Mr Hodder campaigned the car lightly in MG Car Club events and retained the Parson for many years finally selling it to the deceased owner in 2003.
An MG racer of many years standing and a great fan of British competition cars, he embarked upon an energetic and successful competition programme. The car competing at the Goodwood Revival twice and many other venues, venturing as far afield as the Phillip Island historic races in Australia. There it also featured in the “The Cars of the Century Display” at the Australian Grand Prix and was demonstrated at that event. Throughout his ownership the car was maintained by specialists John Bibby and Paul Myatt, see invoices on file.
Following the owner/drivers death in 2011 the Parson has been retained by his family and although used sparingly it has been maintained by Ian Harris Engineering and run regularly.
Professionally constructed to a high standard to publicise a leading engineering company, the Parson MG will offer a new owner a unique and highly eligible 1950s sports racing car for events such as the Goodwood Revival and Members Meeting and series such as the Woodcote Trophy, FISCAR and countless others worldwide, or simply an exciting and stylish road car. Offered with a purpose built detachable roll-bar, alternative driving seat, tailor made car cover and fresh FIA HTP until 2030.

Number 33 completed at the Eisenach factory.

An early Pantera in pristine condition.