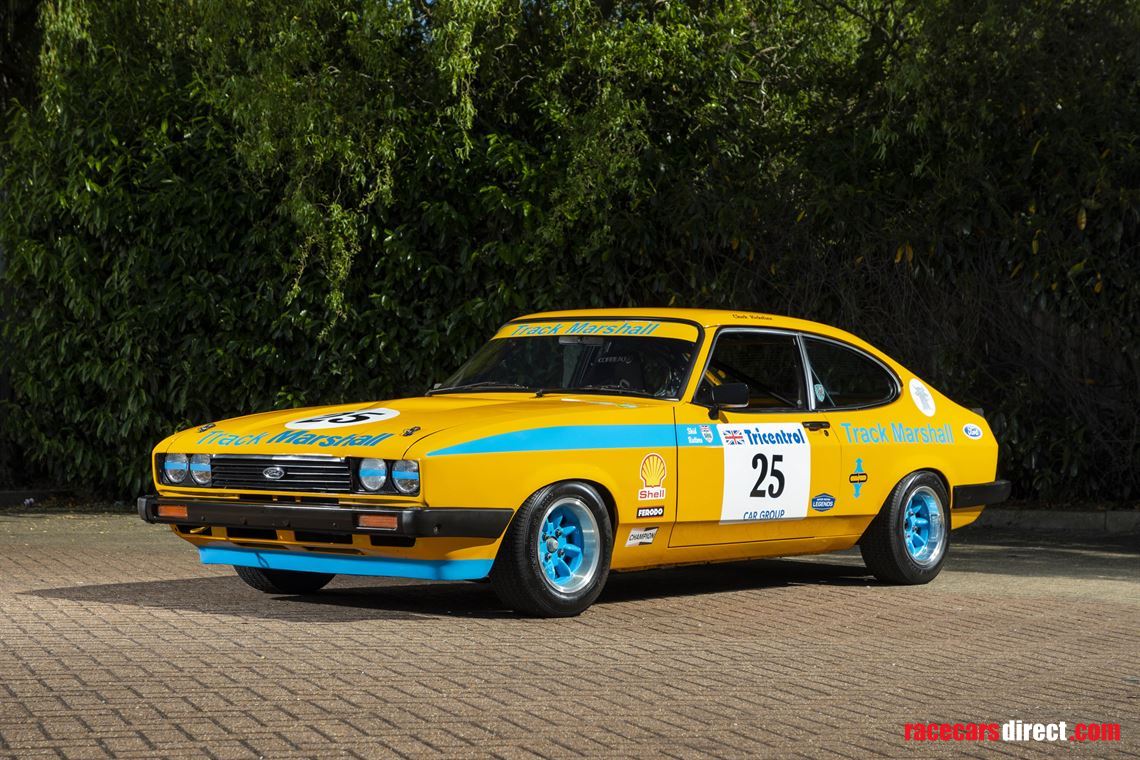 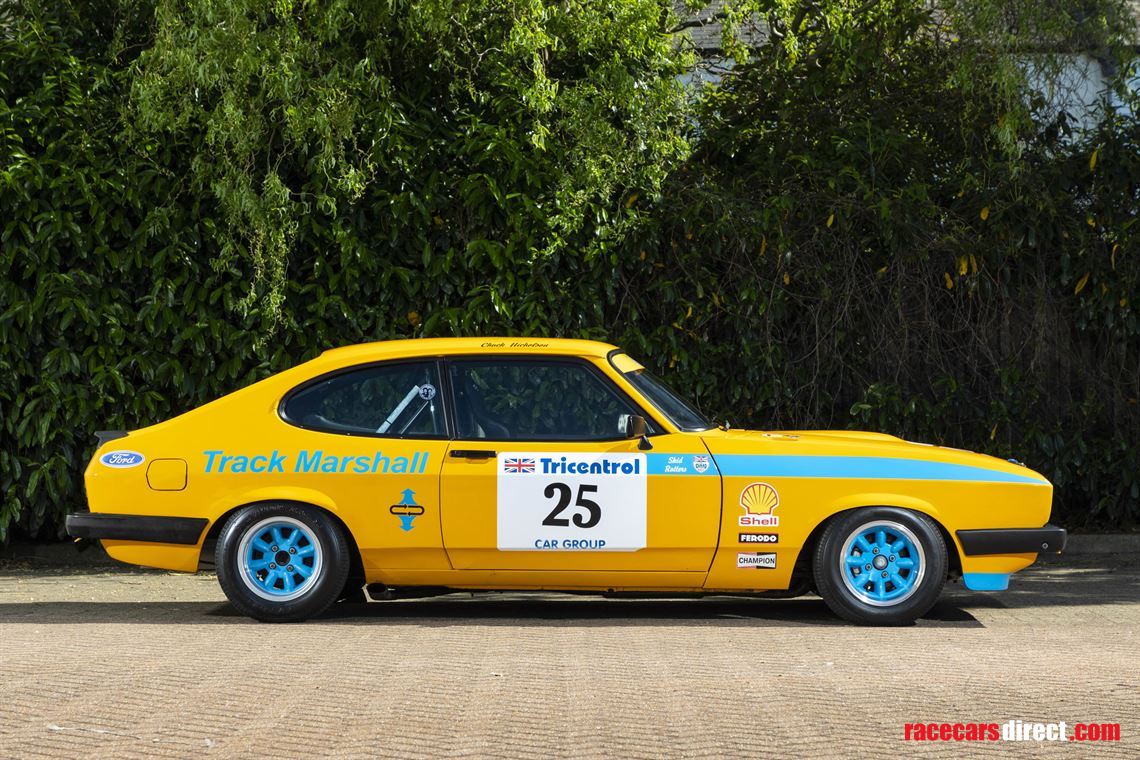 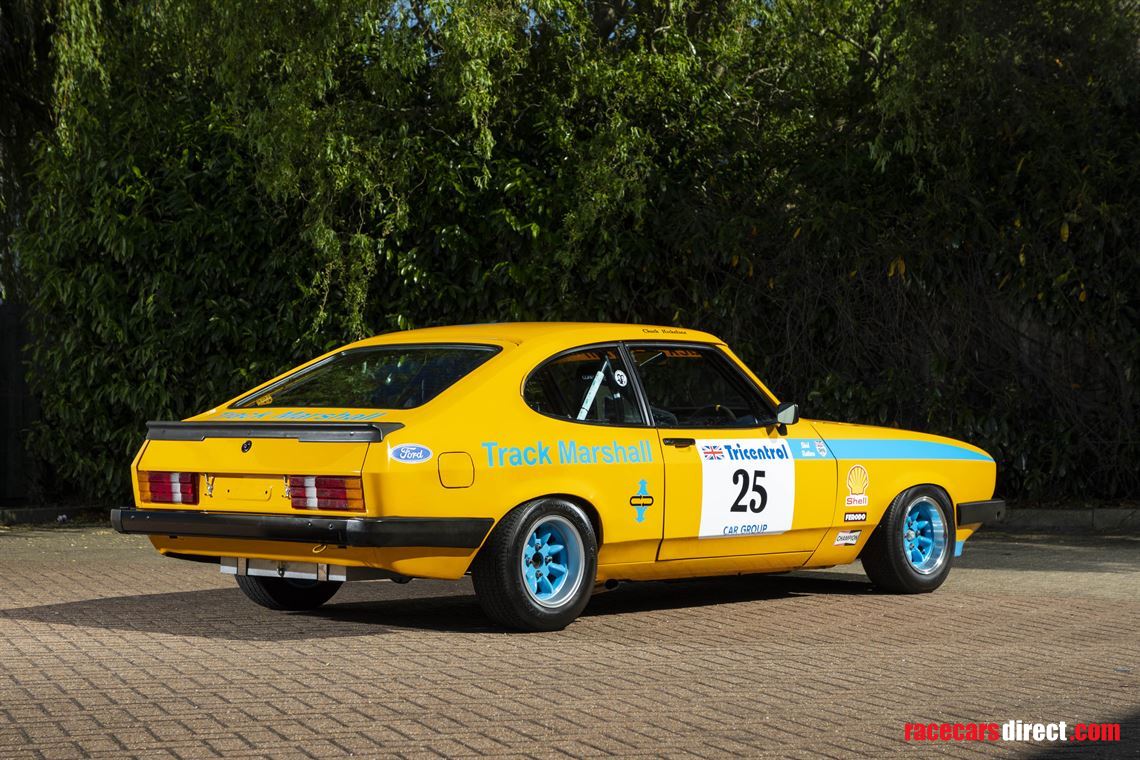 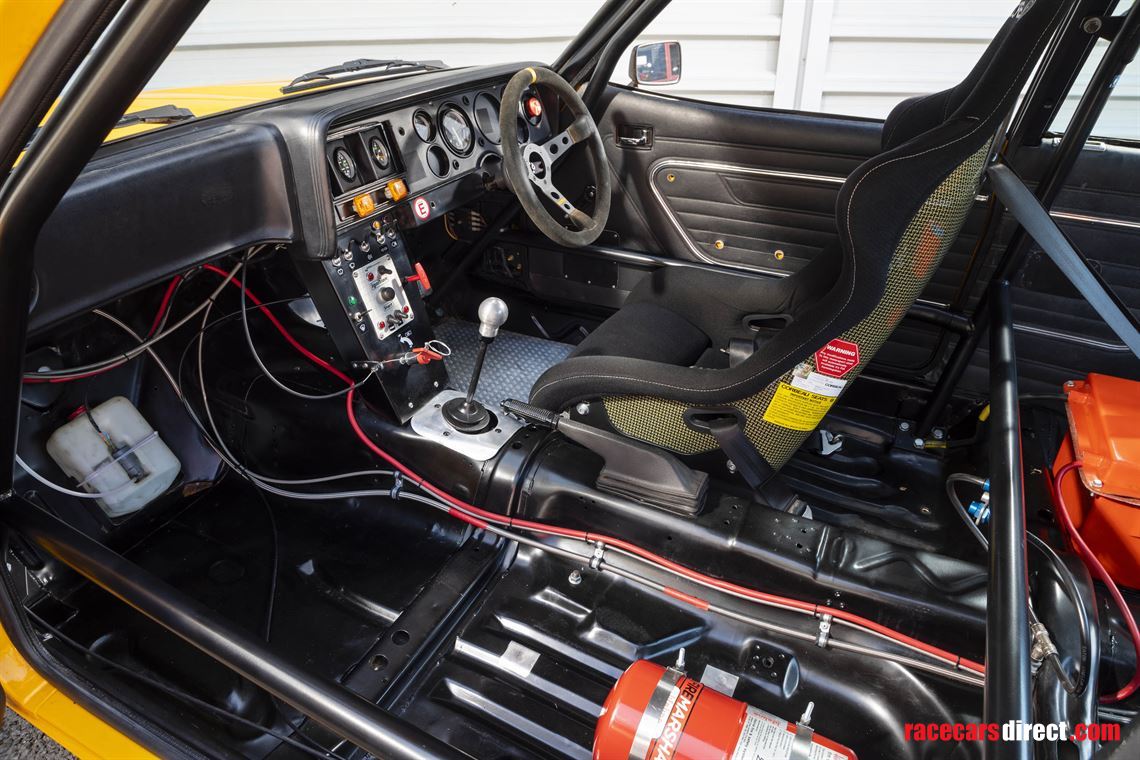 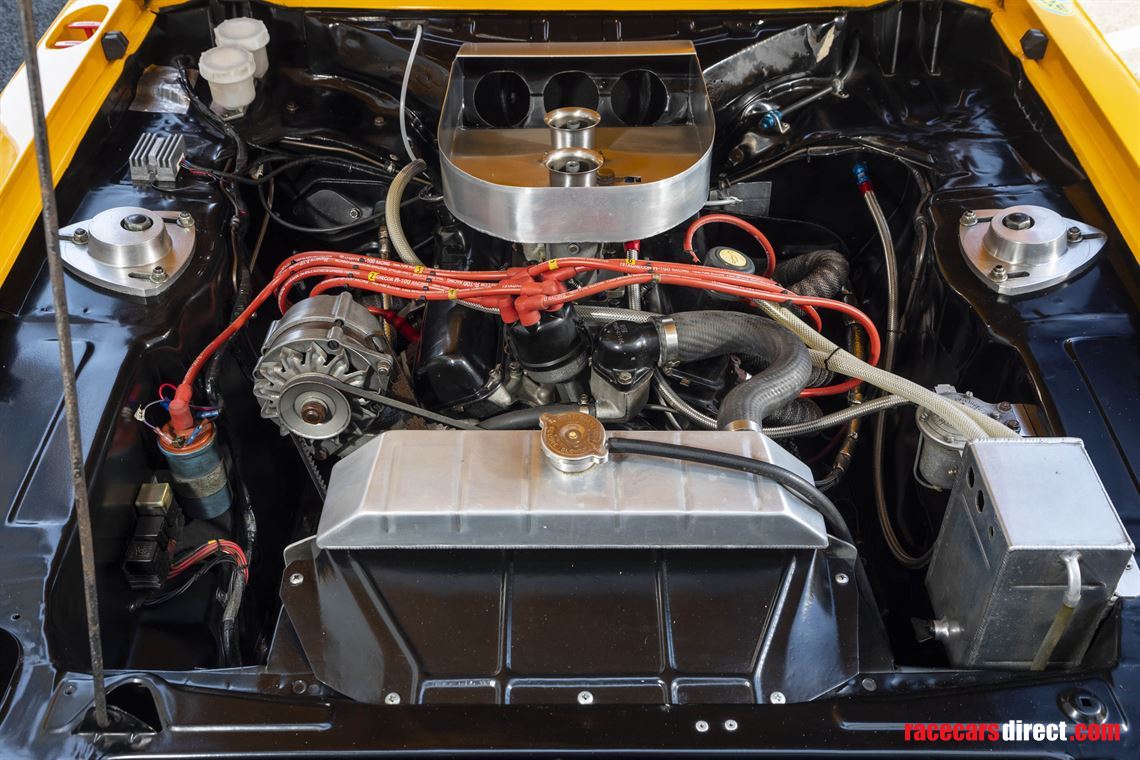 This Mk III Ford Capri was owned by British Touring Car driver, Graham ‘Skid’ Scarborough who is best known in motor racing circles for his heroic ‘elbows out’ on track scraps with the late Gerry Marshall. Scarborough was sponsored at the time by local Hertfordshire businessman Ken Crofton of Letchworth Roofing whose red and white liveries became synonymous with Production Car Championships in Britain during the 1980’s. Crofton bought the Capri from Scarborough and contested the 1983 Production Saloon Championship in the Ford. During the final race of the season at Silverstone, Crofton had an accident at Abbey corner and damaged the shell beyond repair. Crofton purchased a brand-new shell from Ford and instructed a full rebuild by Roger Dowson Engineering. Dowson had started his own race preparation business following his departure from Gerry Marshall Racing that he had established with Gerry in 1978.

The work by Dowson coincided with Scarborough rebuilding the ex-Track Marshall Capri he had in turn bought from Chuck Nicholson to challenge in the Modified Saloon Championship and in doing so a number of parts were transferred onto Crofton’s car at this time. For the 1984 season, Crofton no longer wished to drive the car himself so invited Scarborough to enter the rebuilt car in the Production Saloon Championship which allowed Scarborough to dove-tail the two Championships. Both cars were painted in identical liveries with sponsorship by Letchworth Roofing.

In 1985, Crofton decided to sell the Capri to Mike Scott of 96 Club – a club which catered for owners to exploit the performance of their car on race circuits rather than the road. Scott used the Capri as a hire car for his club members to enjoy before selling it to two of his members. The Capri was used on track days until the late 1980’s when it was put into storage.

In 1992, the Capri was acquired by Howard Dawson who happened to be an old friend of Scarborough’s but unbeknown to him was that he had bought his friends old racing car! Scarborough could barely believe his eyes after seeing several modifications that he had fabricated himself years before, such as the welded pedal set, he then noticed the Letchworth Roofing sponsorship which was still visible under the now red paintwork. Dawson had the Capri lightly restored and then raced the car with Scarborough at Silverstone with the Eight Clubs.

In 1996, Dawson sent the Ford to Scarborough to be recommissioned so that they could contest the emerging Classic Group 1 Touring Car series with Scarborough on driving duties – they entered a number of races in 1996 and 1997. Dawson raced the car in various events including Spa until 2001. The Capri then saw little use until 2013 when a friend of Dawson’s, Peter Ratcliff, acquired a share in the Ford. Ratcliff and Dawson raced the Capri together in the Future Classics series run by the CSCC and during 2014, 2015 and 2016 had some fantastic battles against Scarborough who was also entered in another Capri.

It was decided in 2016 to completely rebuild the Ford to Group 1 specification with a view to racing the car in the ever-popular Gerry Marshall Trophy at the Goodwood Members’ Meeting. Scarborough acquired a share in the Capri at this time and was responsible for managing the restoration of the car. The bodyshell received a rotisserie restoration and was painted in the distinctive Track Marshall colours of yellow and pale blue with the interior being painted in the period correct shade of satin black. Small details were saved such as the ‘frenching’ to the front wing which contains the battery cut off and fire extinguisher release and the original door cards and dash were retained in a nod to running a period specification. A new bolt-in cage was fitted as it would have been in period along with a new Corbeau seat, Schroth HANS harness and a plumbed in fire extinguisher from Lifeline, all these items remain in date today. The 3.0 Litre V6 was stripped down and completely rebuilt with Weber 46 IDA carburettors fitted – the outcome was extremely positive, and a very healthy power and torque figure was achieved once set up on the rolling road (the rolling road print out is contained within the history file). The 4-speed gearbox with Quaife internals was rebuilt at this time and the Capri is running a limited slip differential with a 3.44 ratio. A full stainless-steel exhaust system with side-exit pipe was fabricated by BTB exhausts and an additional silencer to adhere to stricter noise limits imposed on test and track days is included. Colour coded Minilite wheels were supplied and a further six spare wheels will accompany the car. The Capri was issued with a new Historic Technical Passport in January 2018 which is still valid.

The Capri was debuted at the 2017 Goodwood Members’ Meeting with Scarborough and Ratcliff sharing the car, the pair finished 19th and 15th over the two races. The car was then entered for the Donington Historic Festival later in April where the pair had a 4th in class.

In 2018, following a late callup to the Goodwood Members’ Meeting, Scarborough was paired with acclaimed rally star Stig Blomqvist for the Gerry Marshall Trophy - the duo finished in 18th place. In the sprint race Scarborough crossed the line in 2nd place although the car was later disqualified for running incorrect front calipers which not been changed since its previous race at Spa. Scarborough and Ratcliff then entered the Ford for the Historic Touring Car Challenge at Donington where the pairing netted a respectable 3rd in class. In August Scarborough and Ratcliff made the trip to Oulton Park for the Gold Cup Historic Race Meeting which proved fruitful with a 1st in class and 7th overall.

The Capri was now showing its true form and the car was duly invited to the Goodwood Members’ Meeting with Scarborough back sharing with co-owner Ratcliff. The pair had a very promising weekend with an 8th and 4th place respectively - being the highest placed Capri at the end of the weekend. Please click on the following link from the Goodwood Road Racing Club for some footage of the Capri; https://www.youtube.com/watch?v=-SYDz0b3whc&t=6s

The final outing in 2019 came at the Spa Six Hours where Dawson and Scarborough shared the Capri in the Historic Touring Car Challenge finishing 3rd in class.

Uniquely this Capri is offered for sale today directly from its original owner - Graham ‘Skid’ Scarborough and his co-owners. Scarborough has been a pivotal character in Capri racing circles for over forty years and has a wealth of experience in setting up one of these cars and knowing what is period correct. Having only ever been built as a race car (not a converted road car), this Group 1 Capri is in genuine race ready condition and presents extremely well.

Race ready with FIA HTP, period race history and first time ever it’s been for sale

A range of size options