This Chevrolet Corvette GTP is the final of seven prototype race cars built by Lola Cars Limited and developed by General Motors between 1984 and 1988 for GM’s factory campaign in the IMSA GT Championship, and it is one of two examples designed for V8 power. Chassis T8811-HU01 was delivered new in May 1988 to Peerless Racing, who campaigned it as a privateer entry during the 1988 and 1989 IMSA seasons with David Hobbs, Jack Baldwin, Jacques Villeneuve, and Scott Goodyear at the wheel. The car was then developed by Paul Canary Racing as the Eagle 700 for entry in the 1990 24 Hours of Le Mans, with power from a quad-cam, 32-valve Eagle Performance 10.2-liter Chevrolet V8.

Winner of the 12 Hours of Sebring in 1991 - Eligible for Group C, Le Mans Classic, Monterrey

Great racing car with a sensational history. Rebuilt and technically updated, since then only 13.5 h

Lola B12/80. Owned and raced by Dempsey Racing in the 2012 IMSA championship 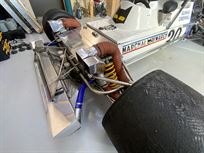