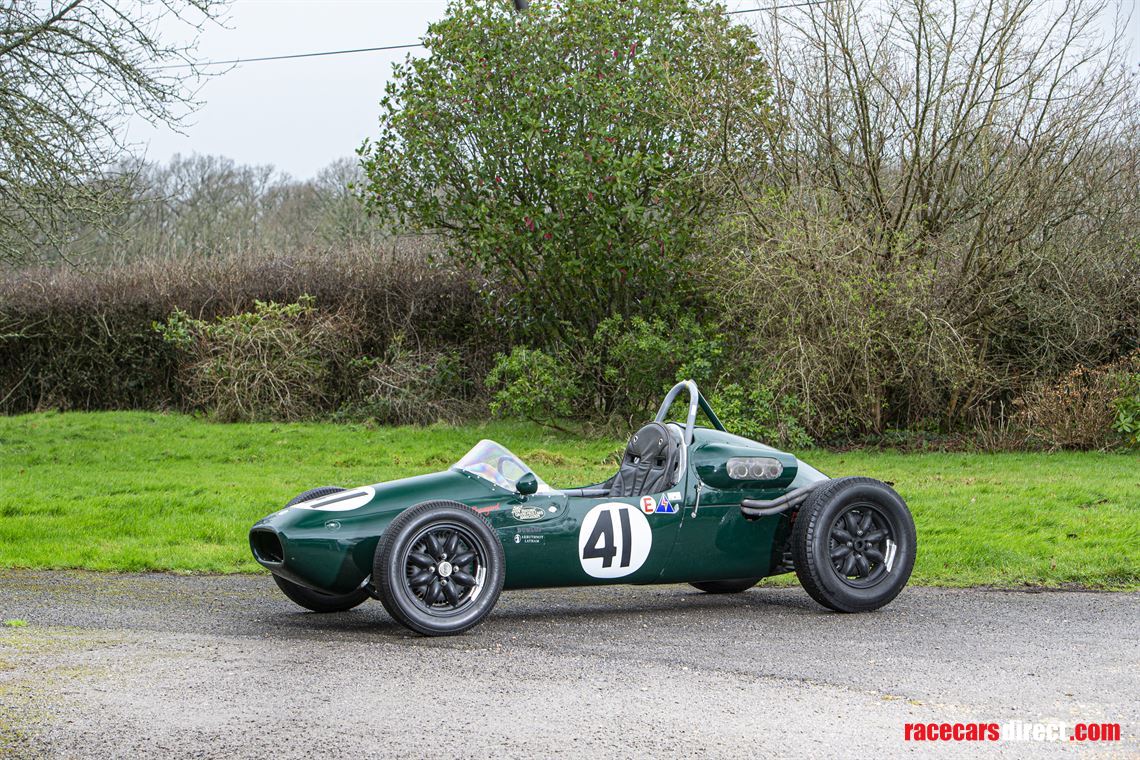 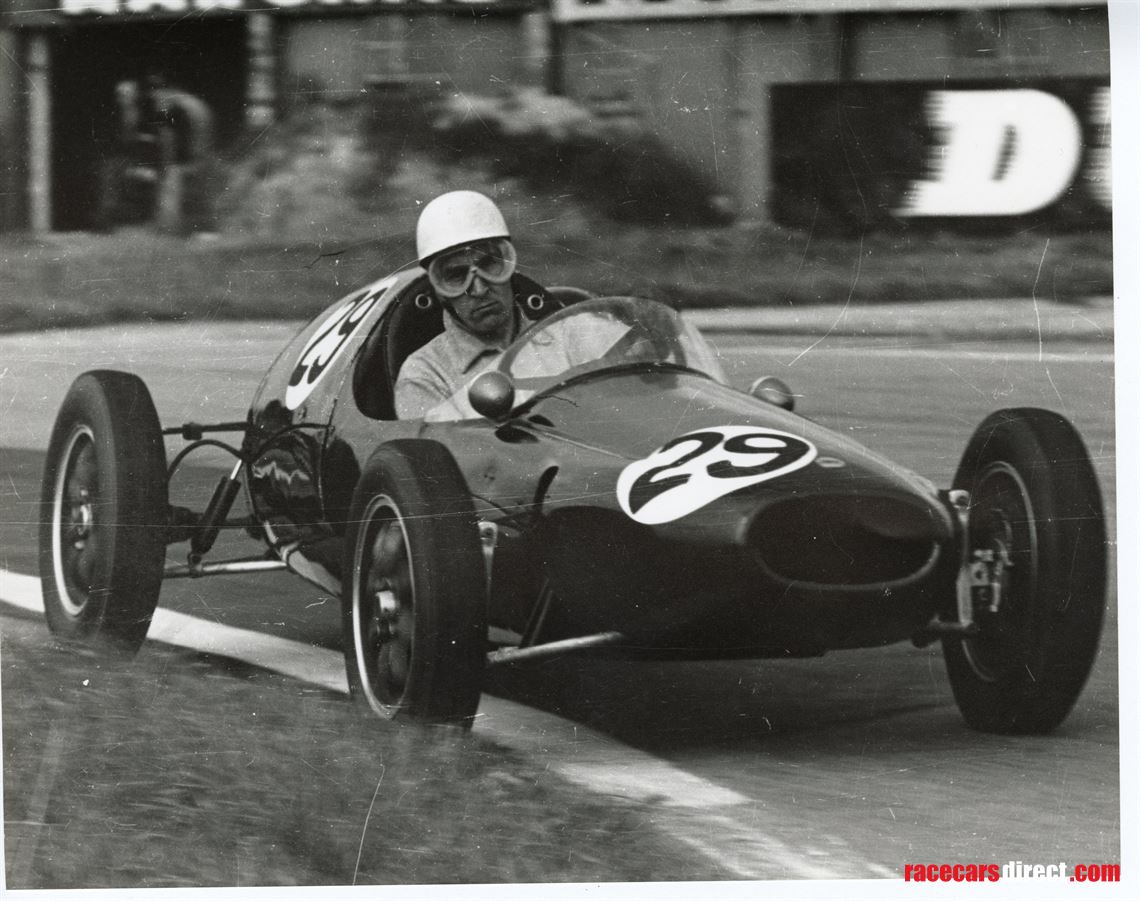 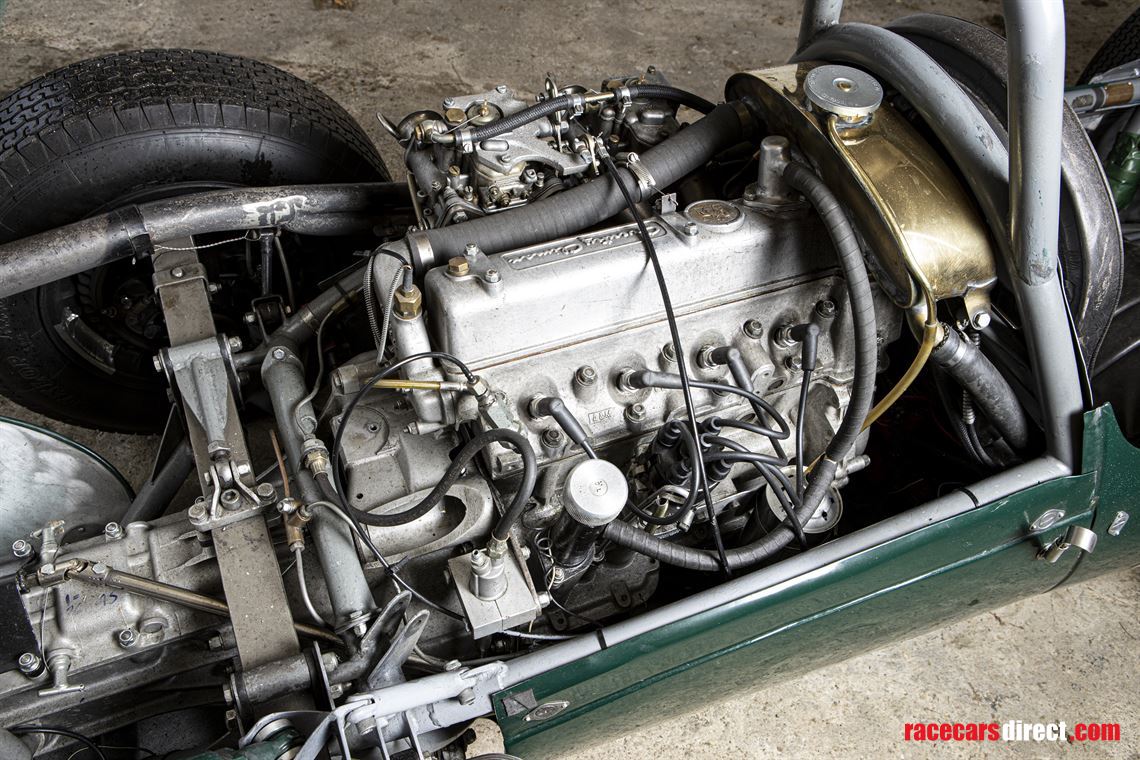 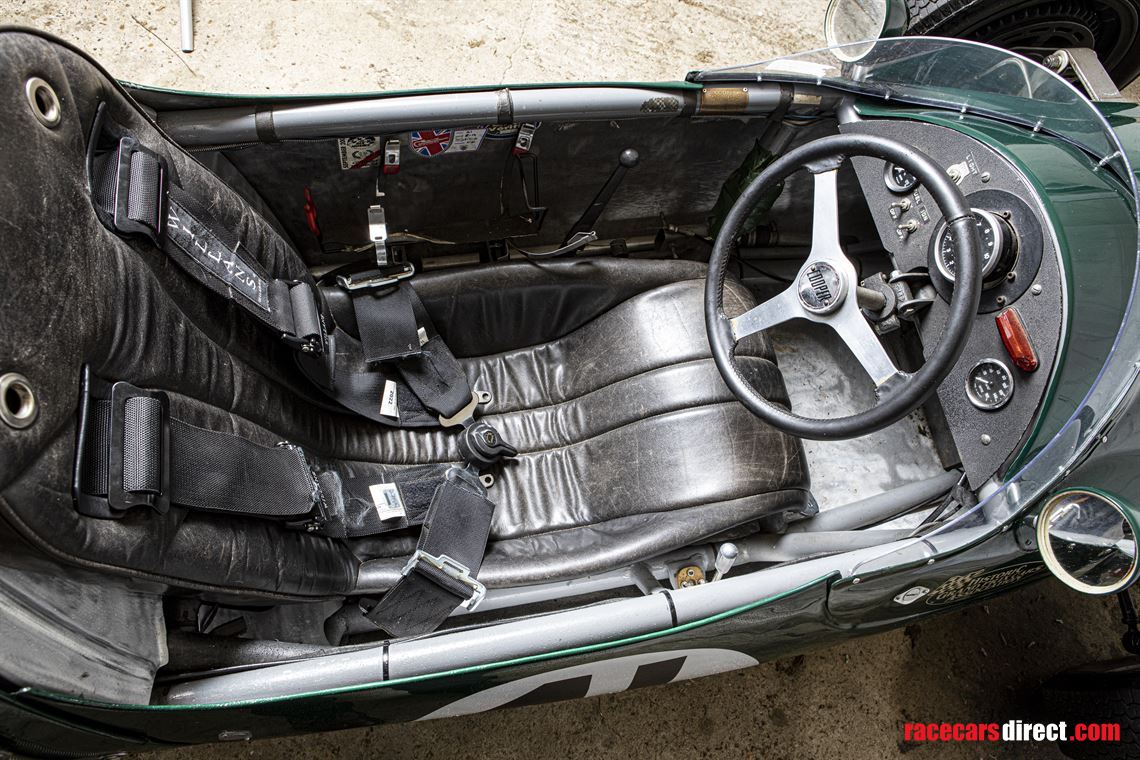 The single-seat, open-wheeled family of Cooper-Climax racing cars was developed initially from the Surbiton company's centre-seated 'Bobtail' sports-racing car design of 1955. The FIA governing body of motor sport had announced that a new Formula 2 class of racing would be launched Internationally in 1957, and Charles and John Cooper really became the first to foresee the potential market that the category could create for a ready-made production design. So the basic 'Bobtail' chassis frame, stripped of its outboard supporting members for the wide sports car bodywork, and clothed instead with a wheel-exposing lightweight 'slipper' body design, was quickly prepared in time to dominate a brief series of 'dress rehearsal' Formula 2 races that were run in England towards the end of 1956.

This handsomely presented Formula 2 Cooper-Climax Type 41 began life as one of the very first group of single-seater rear-engined water-cooled cars to be produced by the Cooper Car Company. Dry weight was a mere 694lbs and Roy Salvadori won upon the prototype's debut in an 'F2' supporting race for the 1956 British Grand Prix at Silverstone. Two works cars were driven that year by Roy Salvadori and Jack Brabham, and two more were sold to private entrant Rob Walker and to owner/driver Ken Wharton.

This car is believed to have been Salvadori's Silverstone-winning T41 that was sold to New Zealand driver Syd Jensen, who took it home, finishing second at Mairehau and fifth at both Levin and Wigram (Christchurch). Syd Jensen returned to Europe for the 1957 international season, after selling that first T41 to his compatriot Ron Frost.

Frost finished second at Levin late that year and ran second in the inaugural race meeting at the world's most southerly motor racing circuit – Teretonga Park, outside Invercargill, on the southern tip of New Zealand's South Island. Ron Frost finished sixth in the New Zealand Grand Prix, before rolling the car at Levin. This necessitated a replacement chassis; the original is offered with the car along with the original tail section bodywork.

After repair the car was raced by Merv Mayo who took fifth place in it at Wigram before the car passed to Tony Shelley who won with it upon his debut at Teretonga late in 1958. Tony Shelley would progress subsequently into Formula 1 as a private owner-driver. The car's ownership sequence then includes Dave Evans and Duncan McKenzie before it became one of teenage prodigy Chris Amon's early mounts – 'Chrissie' becoming a works driver for McLaren, Ford - winning Le Mans in 1966 - and Ferrari and one of the most capable of top-line international star drivers. Extrovert speedway motorcycle star Bruce Abernethy later owned and raced the Cooper, at one stage painting eccentric white circles on its tyre sidewalls.... The car passed via Jim Boyd – another most prominent Kiwi racing name – to collector Bill Clark for whom it was subsequently rebuilt and restored by the prominent New Zealand specialists Auto Restorations of Christchurch.
In 1999 the car appeared in the hands of British Historic racing owner-driver Ted Rollason, before passing into its present ownership in 2007. Since then it has been extensively and successfully campaigned by noted historic racer Brian Maile. We are advised that the gear linkage and carburettors have been upgraded (originals with car) and that the engine will require attention before returning to the track.

An ideal entrant for the HGPCA's Pre-'66 and Pre-'61 classes, this historic Cooper-Climax has FIA HTP valid until 2025 and comes with a huge history file containing timesheets, hand-written notes, old FIA papers, race programmes, etc, etc. Used to transport it to and from race meetings, the car's trailer and a quantity of assorted spares are included in the sale.