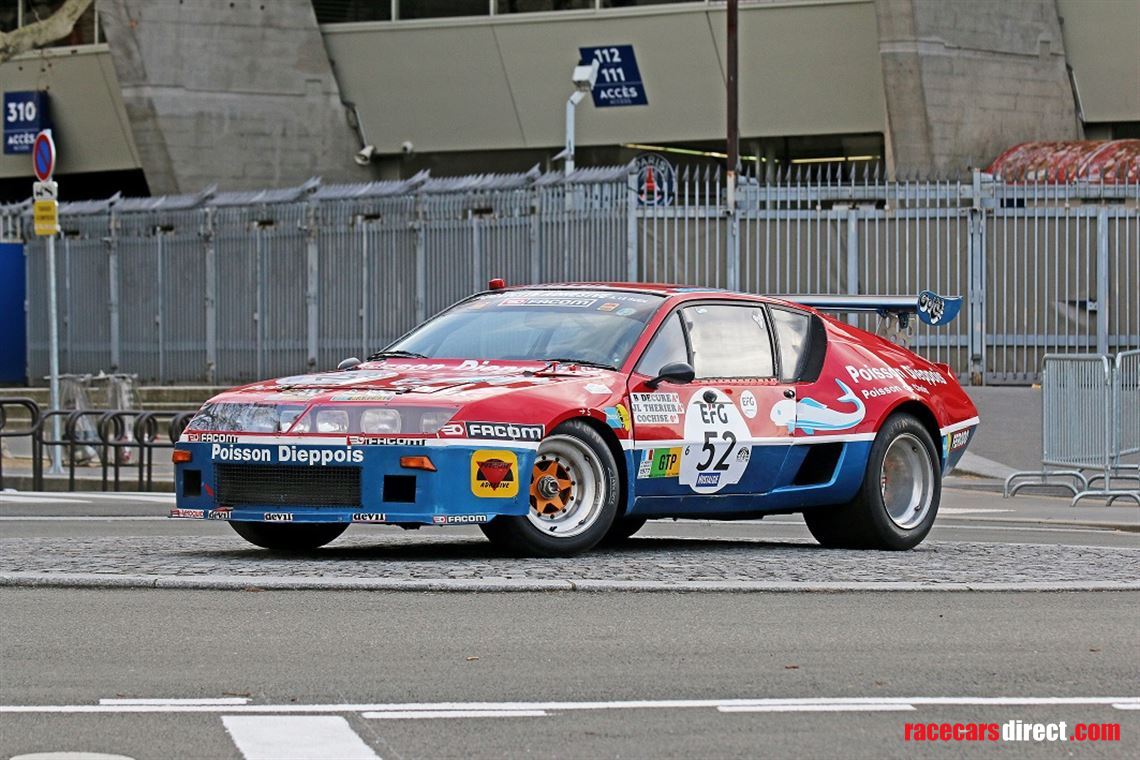 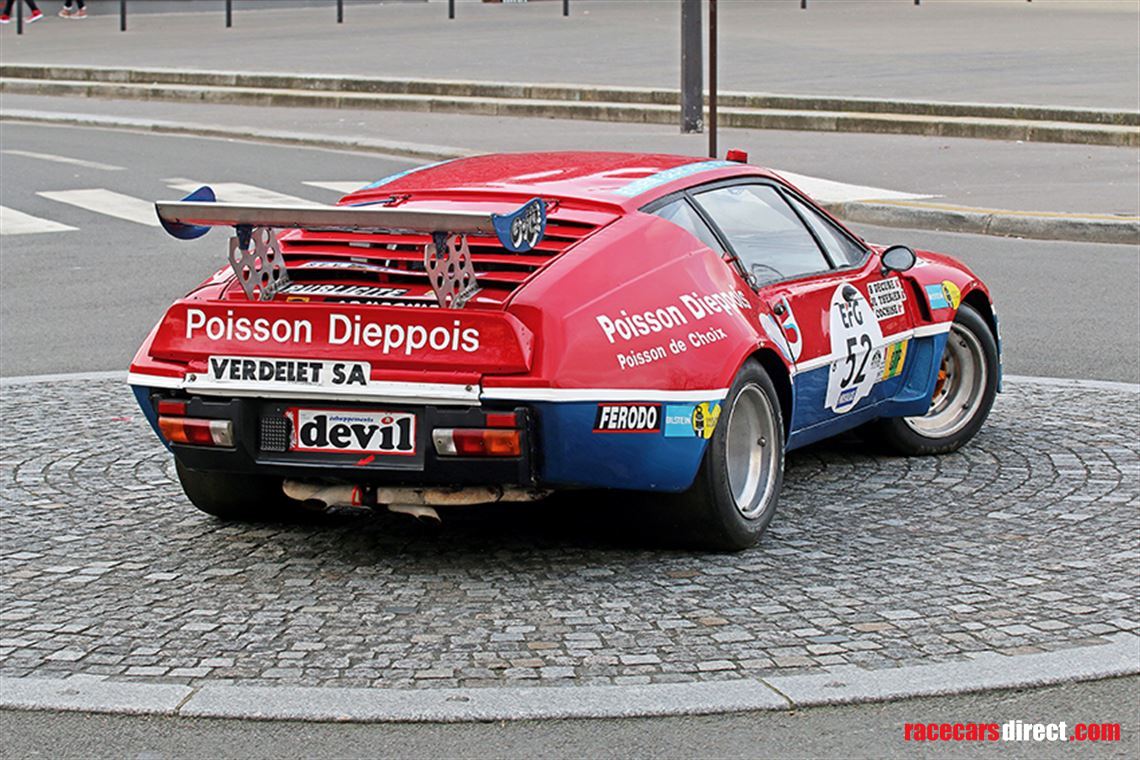 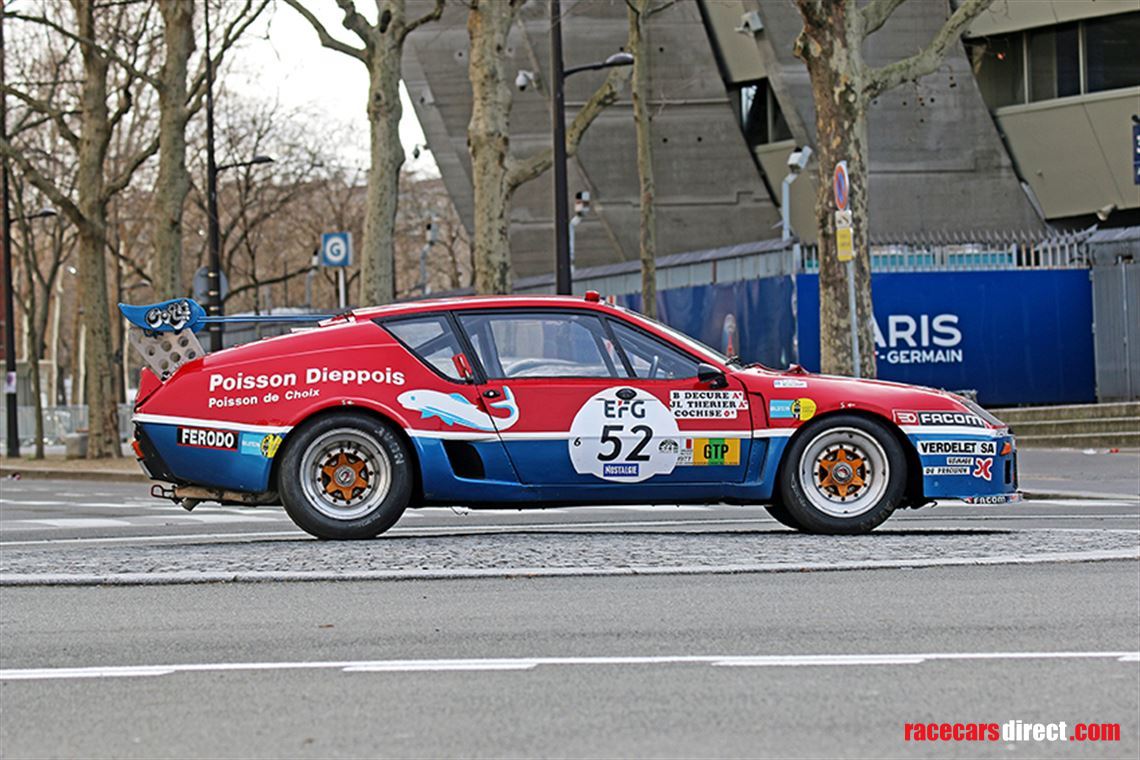 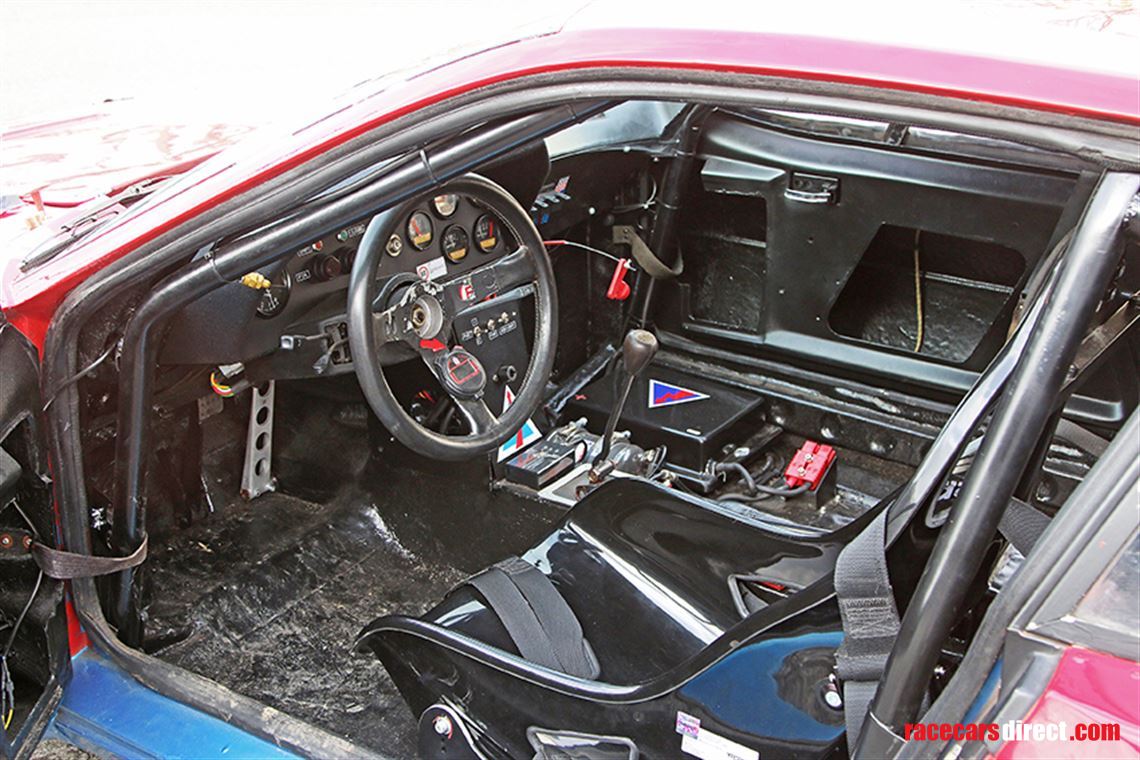 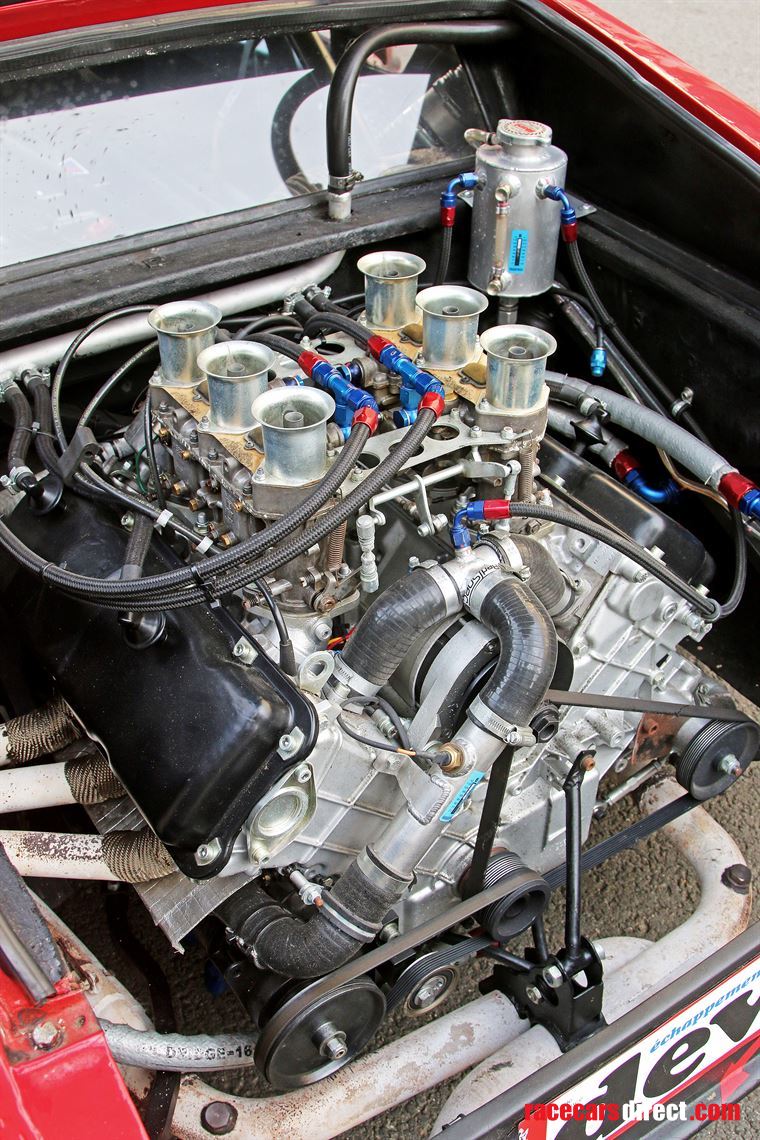 - Clear history and great restoration in 2018 by Equipe Europe

Few cars can pretend of being famous for their livery, track record, history, performance or rarity. The Alpine A310 V6 that we have the honour of presenting in auction today is one of them !

At the beginning of the history :

Starting as the first A310 V6 factory prototype, the legendary pilot Mauro Bianchi participated at its development. Indeed, in 1974 the A310 appeared under-powered, so Alpine decided to fit a prototype engine, developed by a new team of young engineers from the Renault Gordini factory in Viry Châtillon. Starting from the V6 PRV engine block, the engineers are going to develop a very light 2.8 litre engine with Lucas injection, with specific cylinder heads and a racing type distribution system developing 300hp, twice the power of a stock PRV! A ZF gearbox from the A210 Le Mans prototypes and a lighter 310 1600 body complete the package. Equipped in this way, it has been assigned to Mauro Bianchi, pilot and developer of the Dieppe brand. From the very first laps of the winter 74/75 on the Dijon track, the car proves to be ultra efficient to the point of turning 3 seconds faster than the best GTs of the moment! The results are there but the budgets are too important, Renault then decides to stop the project and put this factory prototype back in a corner of the competition department...

We are in 1975 when a technical inspector at the after-sales service of the Dieppe brand discovers the prototype, stored well out of sight. Named Bernard Decure, he manages, thanks to the help of Mauro Bianchi, to acquire it on April 14, 1976, but without his "Boudy ZGS1" engine which had returned to Viry Châtillon. Recognized driver on race track and in hill climbs races at the wheel of a Gr.5 berlinette prototype during the 75 and 76 seasons, he has only one goal, to present the car at the Le Mans 24 Hours...

A colourful livery for a legendary race :

Like all private drivers, only a sponsor will allow Bernard Decure to have "the means of his ambitions". Without going very far, it is the Chamber of Commerce managing the fishing port that he will find his funding in exchange for the promotion of the fish caught in this famous port with the slogan "Fish Dieppois, Fish of Choice": this will definitely give its name to the Alpine A310 planned for Le Mans 1977!

Helped by enthusiasts working at Alpine, the car is prepared in accordance with the regulations of the 24 Hours GTP category. The body kit of the prototype was replaced by the "group 5" wide wing kit already seen since the end of 1976 on the 310 rally car developed for Fréquelin and which was to be French champion in 1977. A large spoiler and a bumper complete the aerodynamics of the car.  This bodywork, particularly beautiful and aggressive, will allow to mount very wide rims with central nut, specially developed by Camille GOTTI for Bernard Decure. Similarly, the braking system was deeply modified with Citroën CX ventilated discs with 2 and 4-piston ATE brake callipers. A 90-litre fuel tank, side windows and a 225 hp V6 GRP engine developed with the help of the Française de Mécanique de Drouvin in the North of France complete the package.

Jacky Cauchy, a fine hillclimb racing pilot, well known for racing under the nickname "cochise" on an ex-factory berlinette and of course the famous Normand, world rally champion and holder of multiple victories: Jean Luc Thérier, join Bernard Decure... Between rain and shine, the A310 Poisson Dieppois managed to snatch 51st position on the starting grid and after 11 hours of racing, the Poisson Dieppois is in 29th place! Unfortunately during the night, more and more frequent engine heating problems led the crew to abandon the race at 6:47 am.

The cause of the failure will be detected during dismantling: a water tube located in the beam had a leak after many dismantling... Almost nothing, but the adventure will mark the spirits, and the beautiful A310 will return to the pantheon of the history of the Alpine brand by the beautiful human adventure it represented, joined to a breathtaking line and a livery that will make history.

Bernard Decure then decides to re-enter the Alpine at Le Mans 1978. The sponsor changes, it is Behar Électricité Moteur and the livery becomes blue and white for the sponsor. The engine is significantly improved, allowing to reach 290hp. Unfortunately, after several big problems during the tests (engine fire, transmission breakage) the Alpine is substituted by the Lancia Stratos Turbo long chassis number 89 entered by the Aseptogyl team with Christine Dacremont and Mariane Hoepfner. The number 73 of the A310 will not take the start of the 24 Hours of Le Mans.

A race car in the hands of its driver/owner for 40 years :

Bernard Decure will not stop racing with this car. Still improving its performance and expanding its palmares a little more. Hillclimbing and European Championship racing until 1983, it finally retired in 1986. A few years later, Bernard Decure gave it back its well-known "Poisson Dieppois, Poisson de choix" decoration. Since then, it has been exhibited at many first-rate historical events. Endowed of a limpid history, it is invited to the famous Le Mans Heritage Club competition in 2014, bringing together 24 chassis that took part in the 24 Hours of Le Mans. Sold in 2017 to three collector friends wishing to bring it back to life, it is sent to Equipe Europe in 2018 for a refurbishment. Without touching its indisputable authenticity, €129,000 is invested. Its performances at Le Mans Classic 2018 attest to its potential. Already entered in Le Mans Classic 2020 in Plateau 6, its entry will be offered to its purchaser !

The engine currently installed in the "Poisson Dieppois" is the one fitted with carburettor as the one that was in the car at Le Mans 1977, but evolved by Marc Guerbeur ( engine engineer at Renault) to reach 240 hp.

3rd in the 1974 Monaco Grand Prix. Eligible and entry submitted for the 2021 Monaco Historic GP.

Little trailer with tractor to sell as one