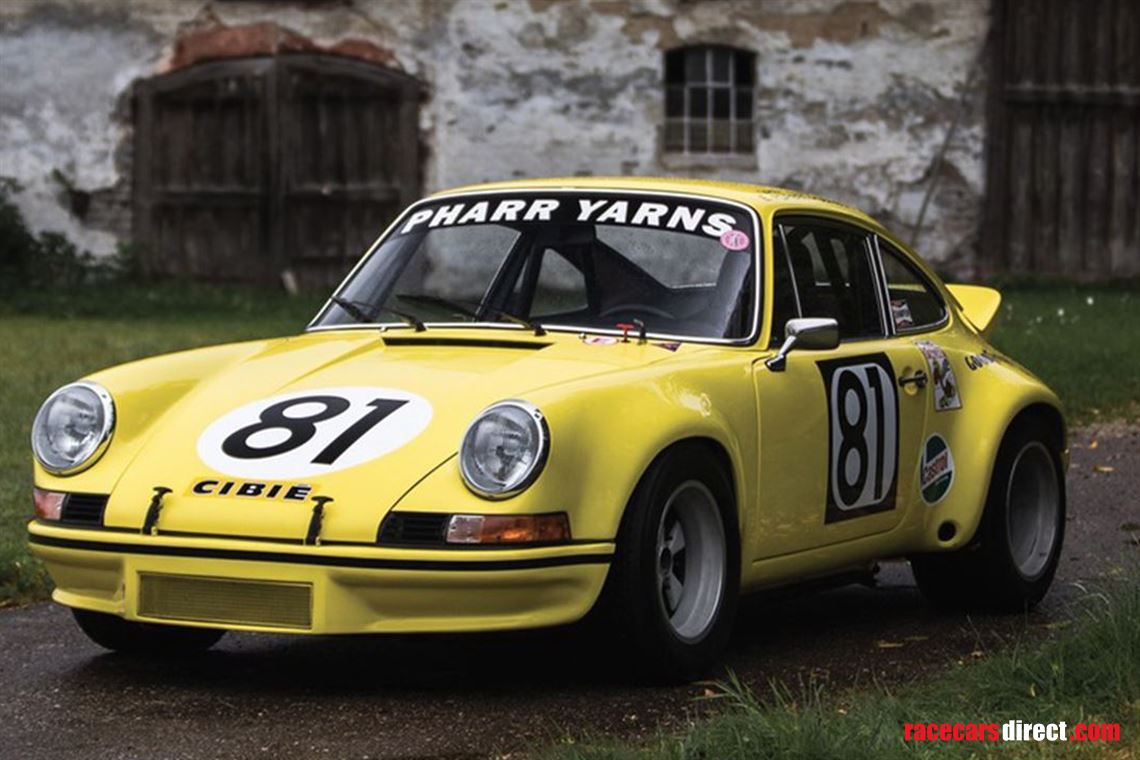 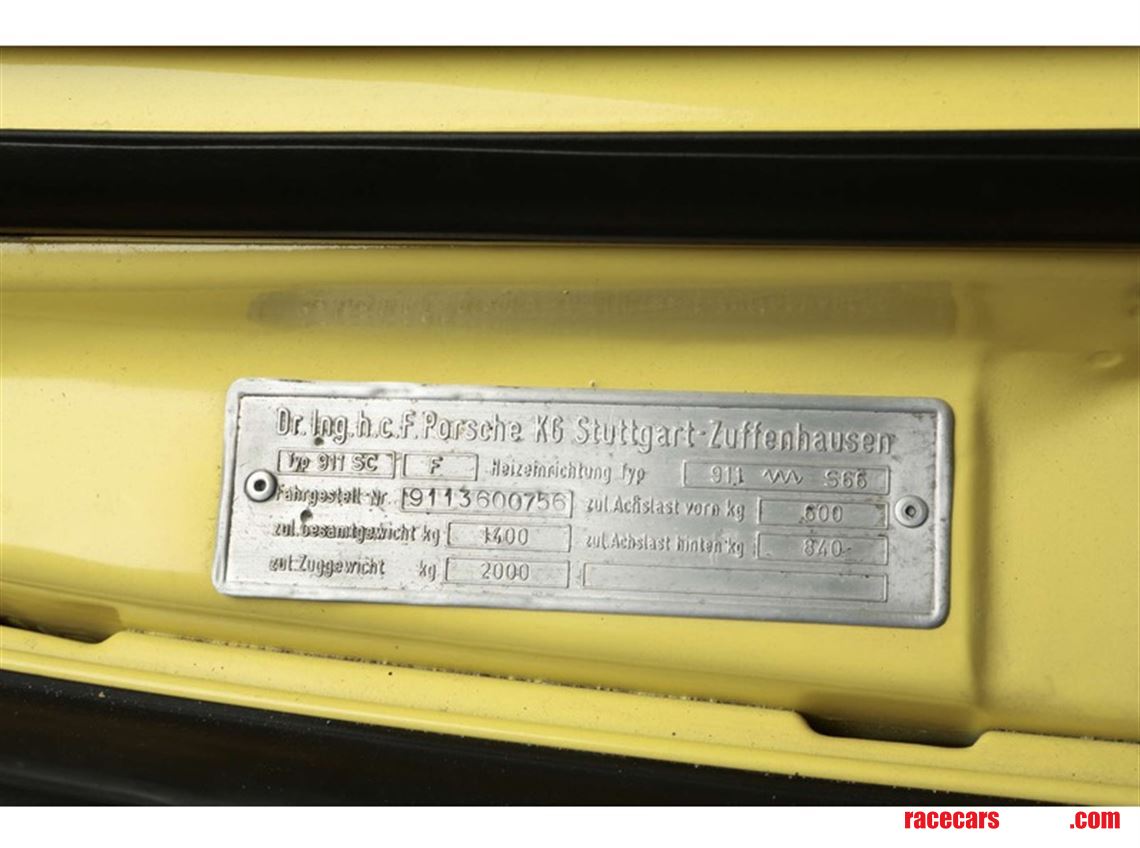 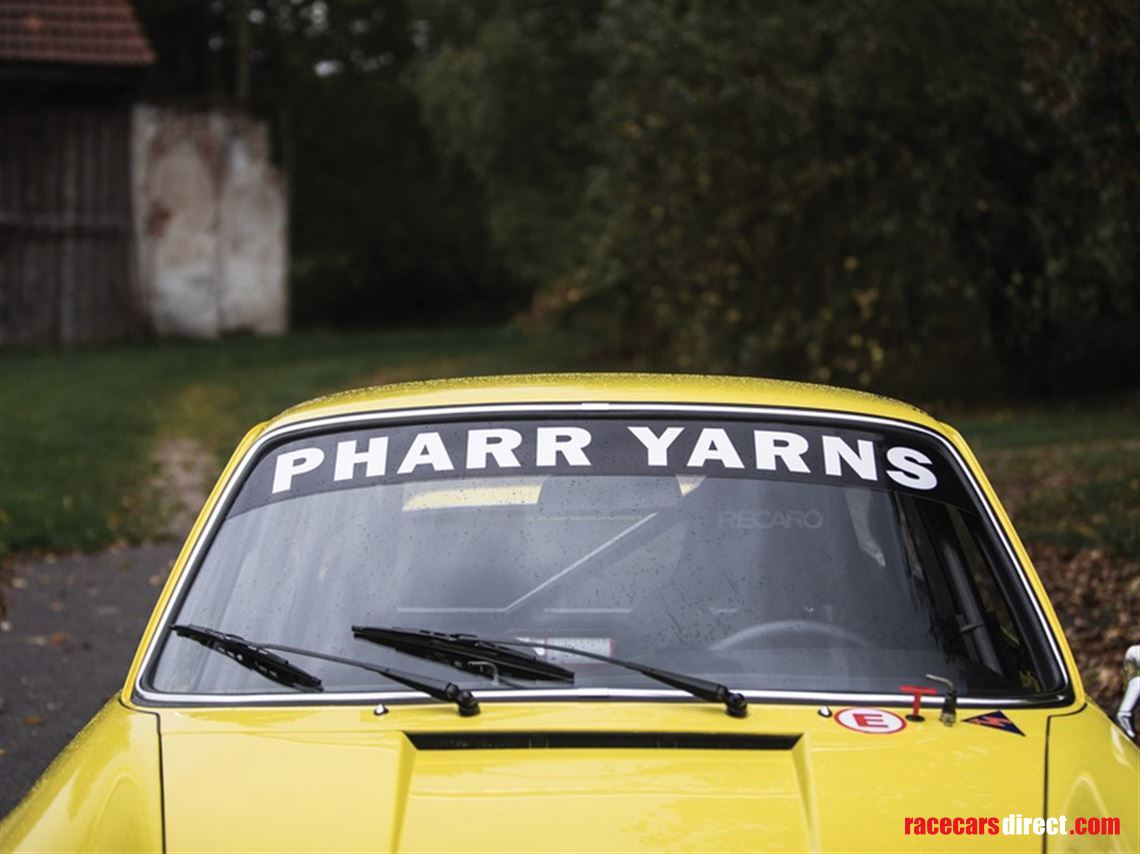 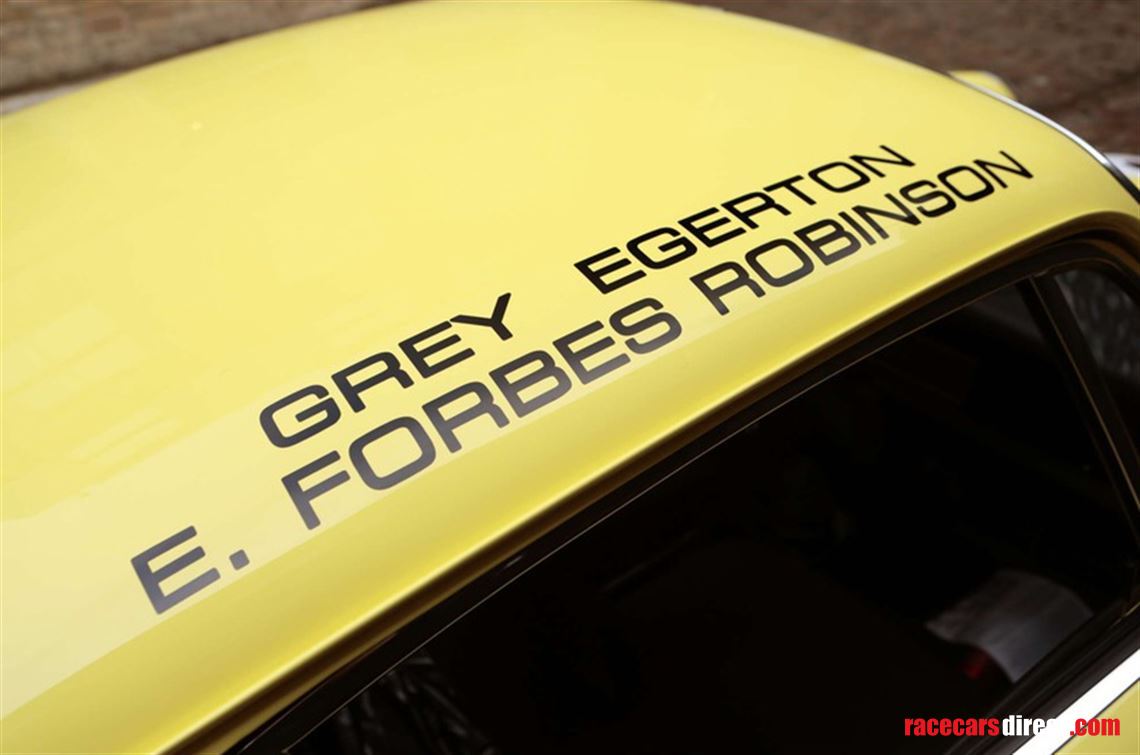 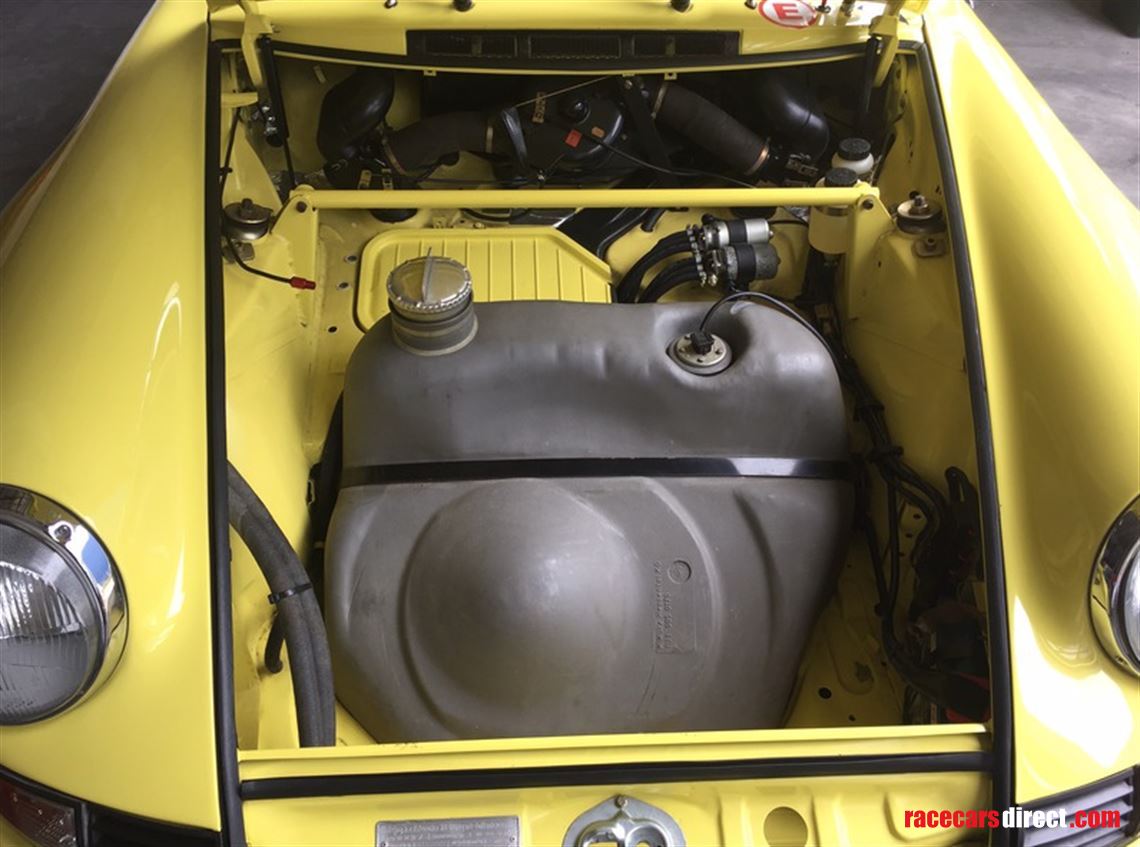 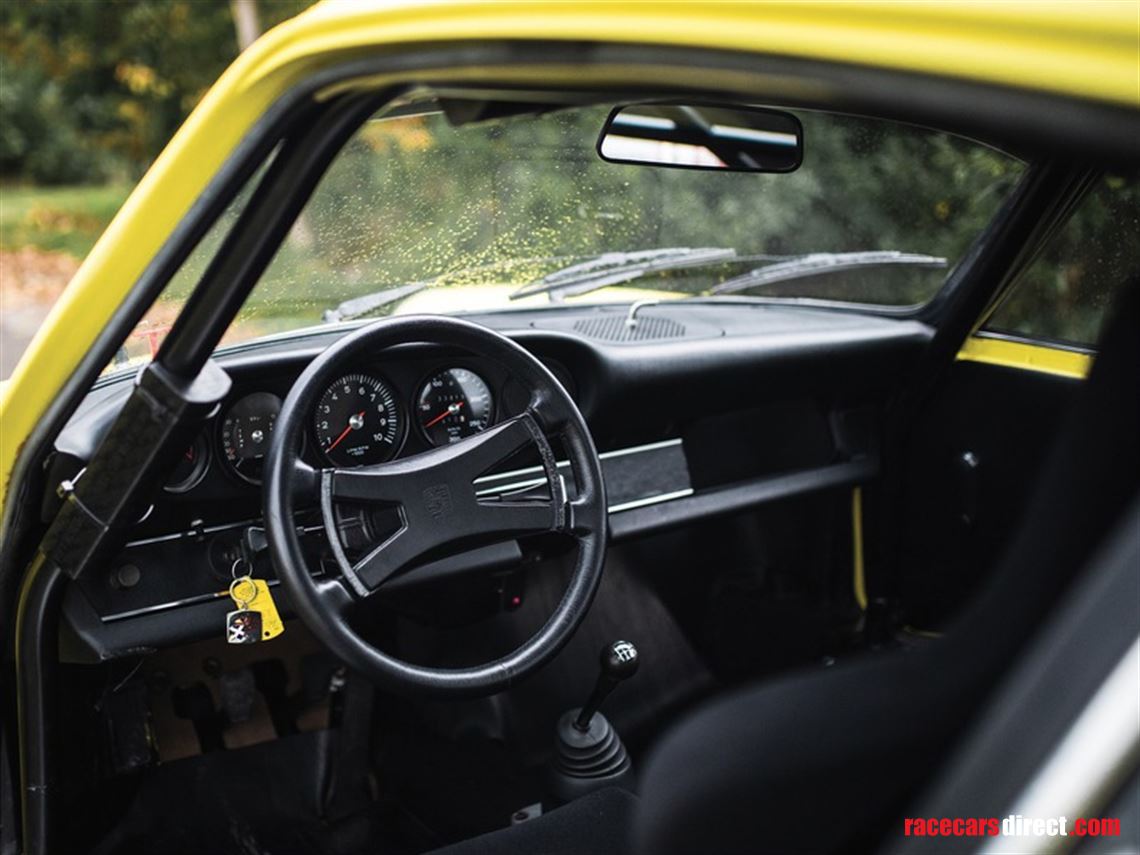 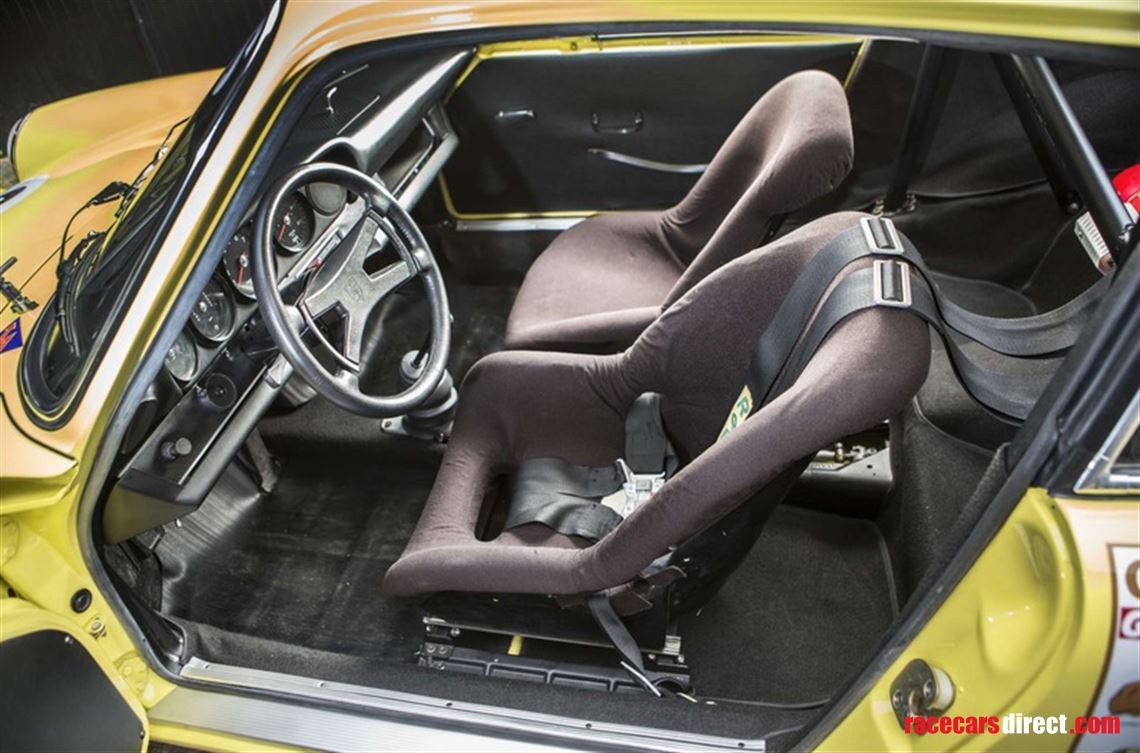 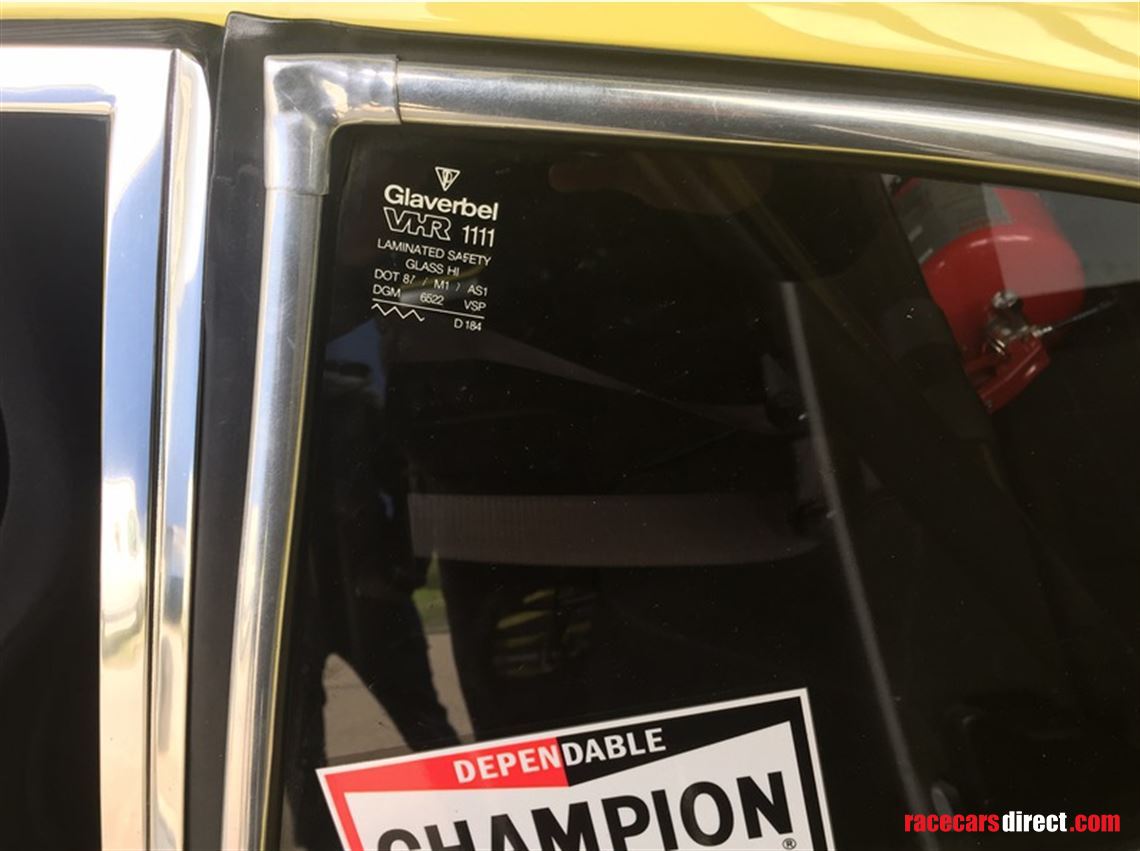 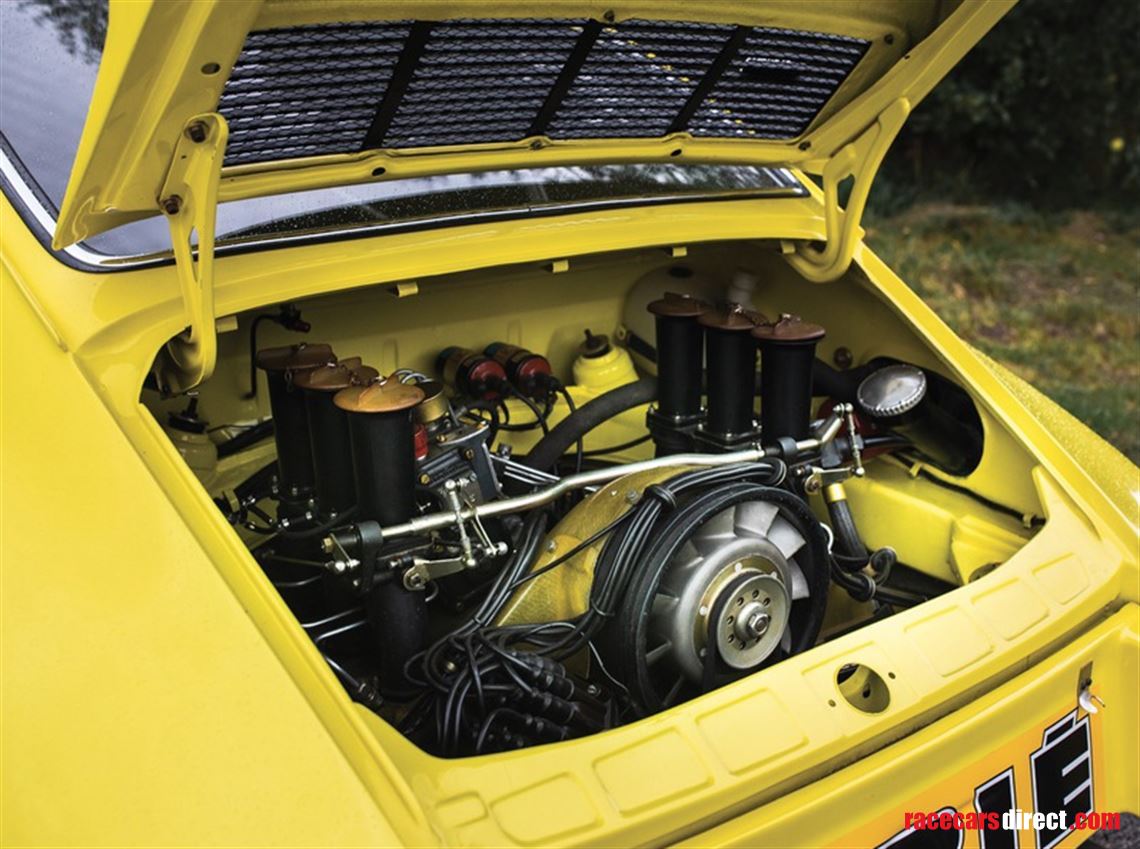 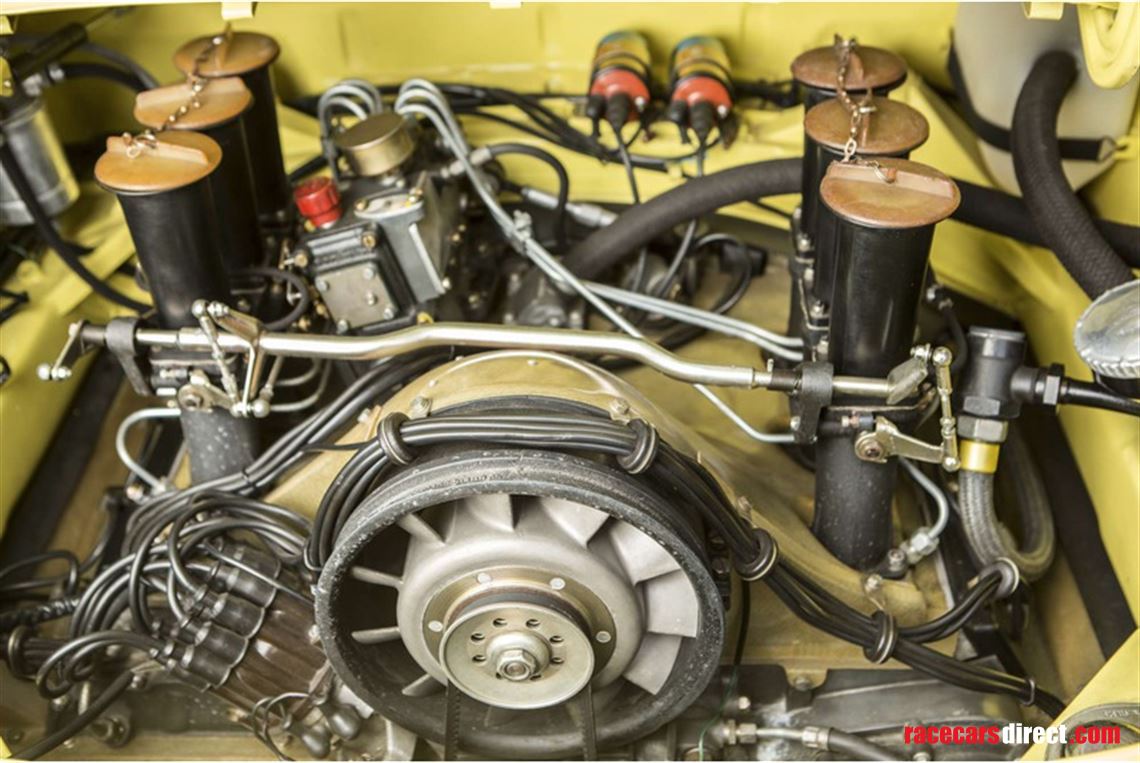 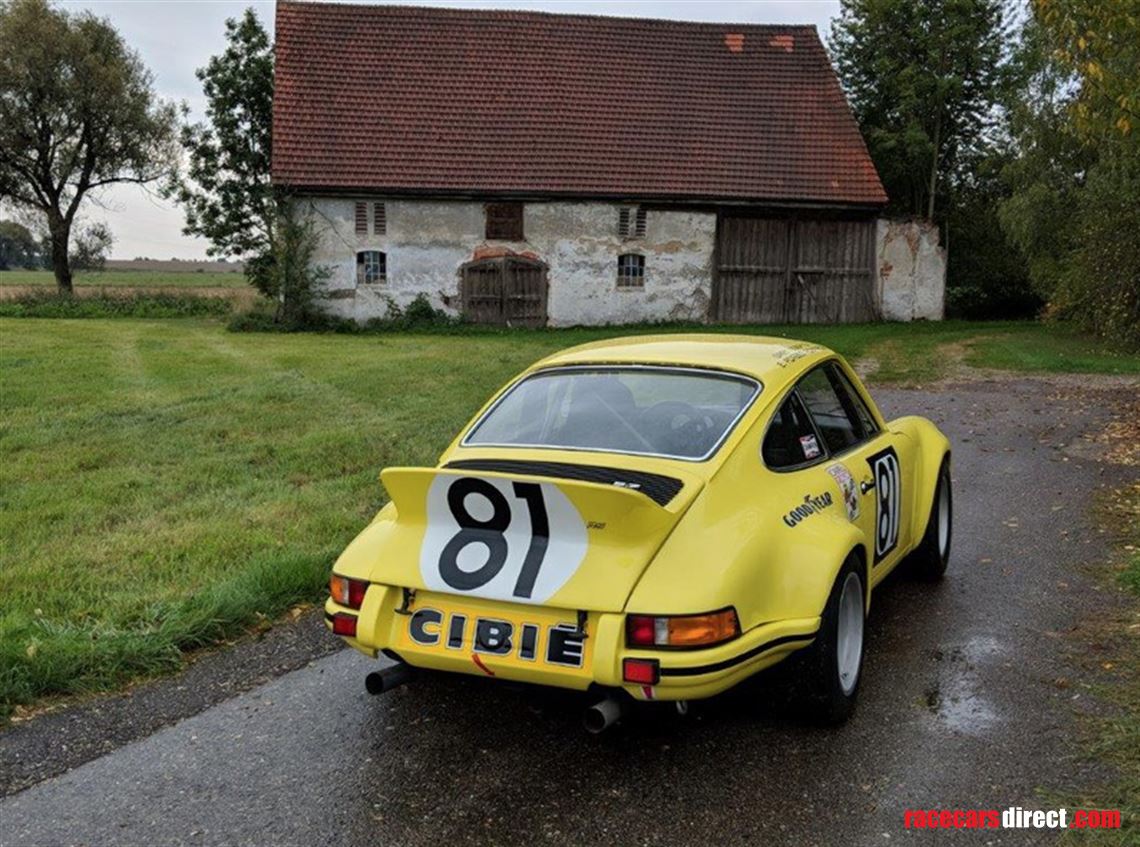 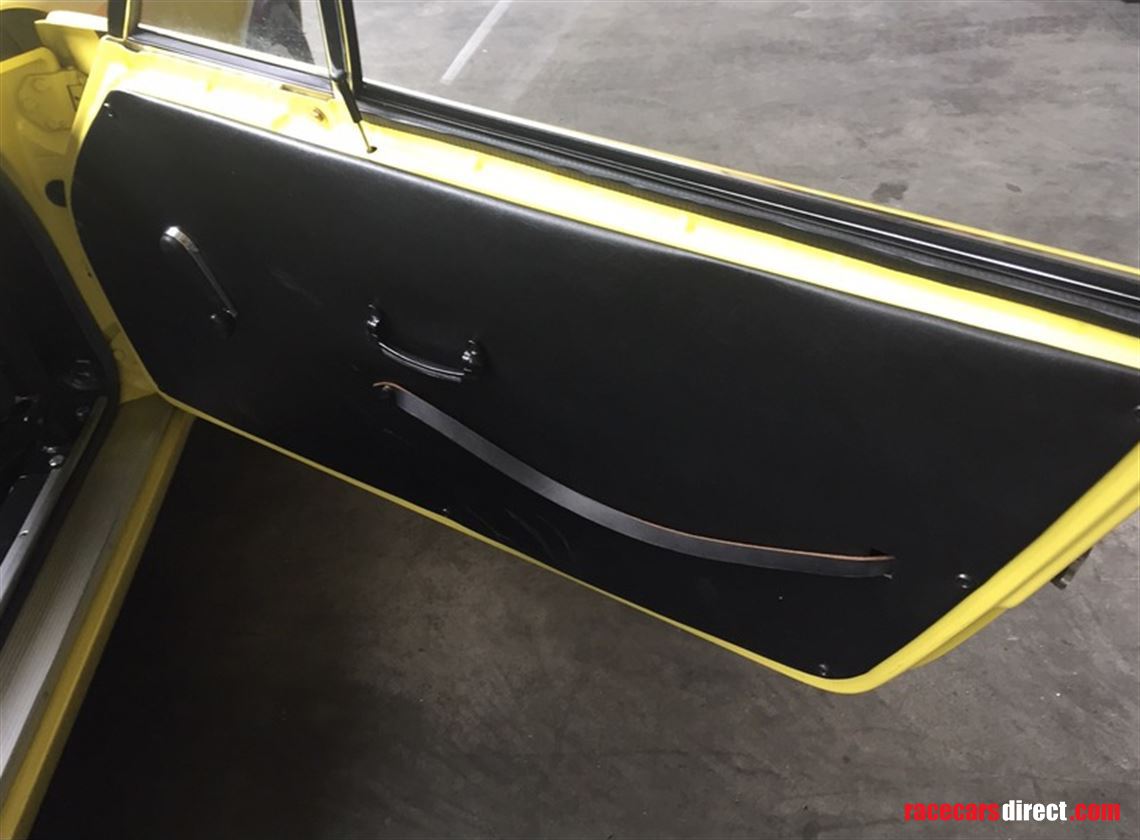 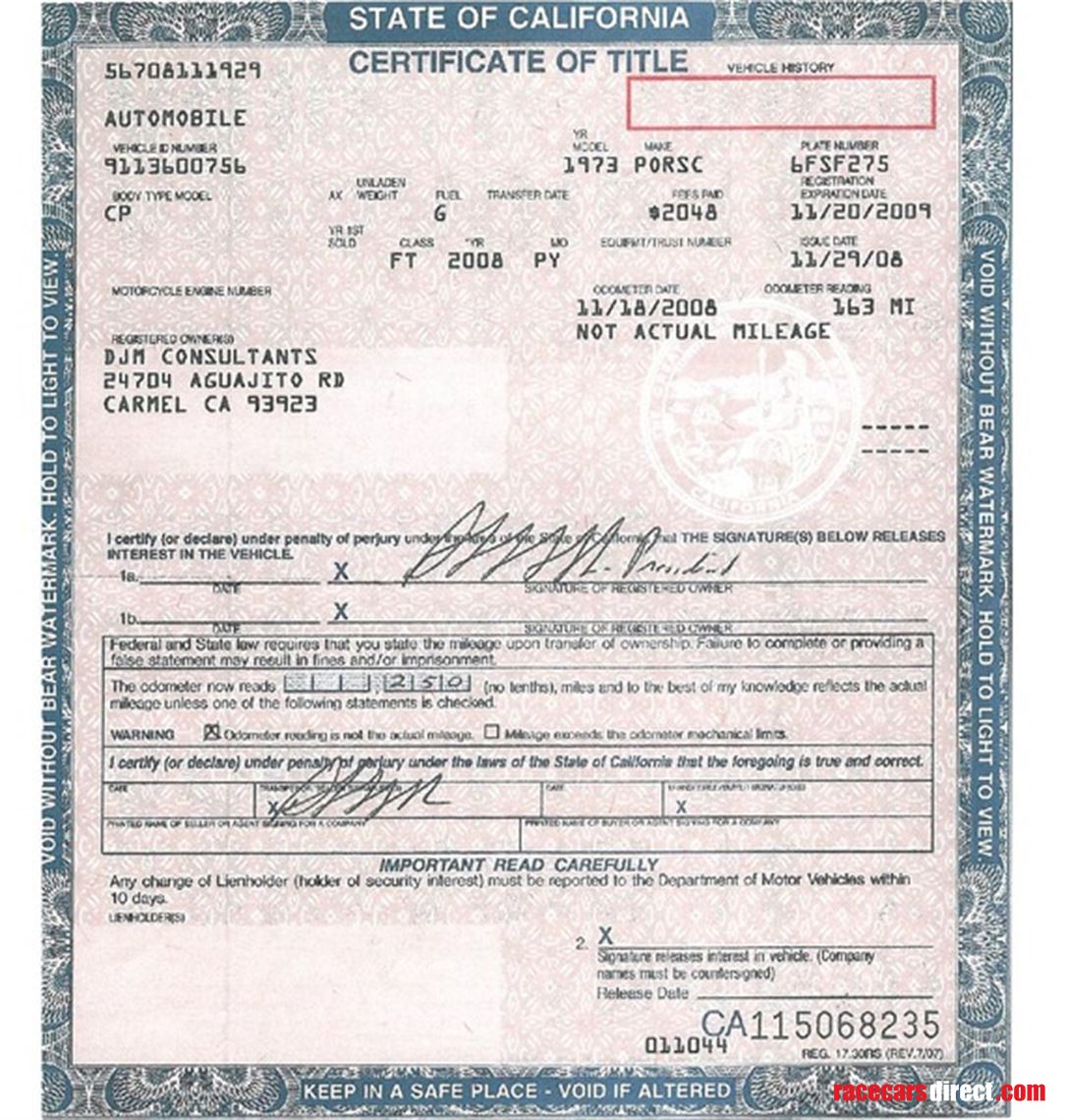 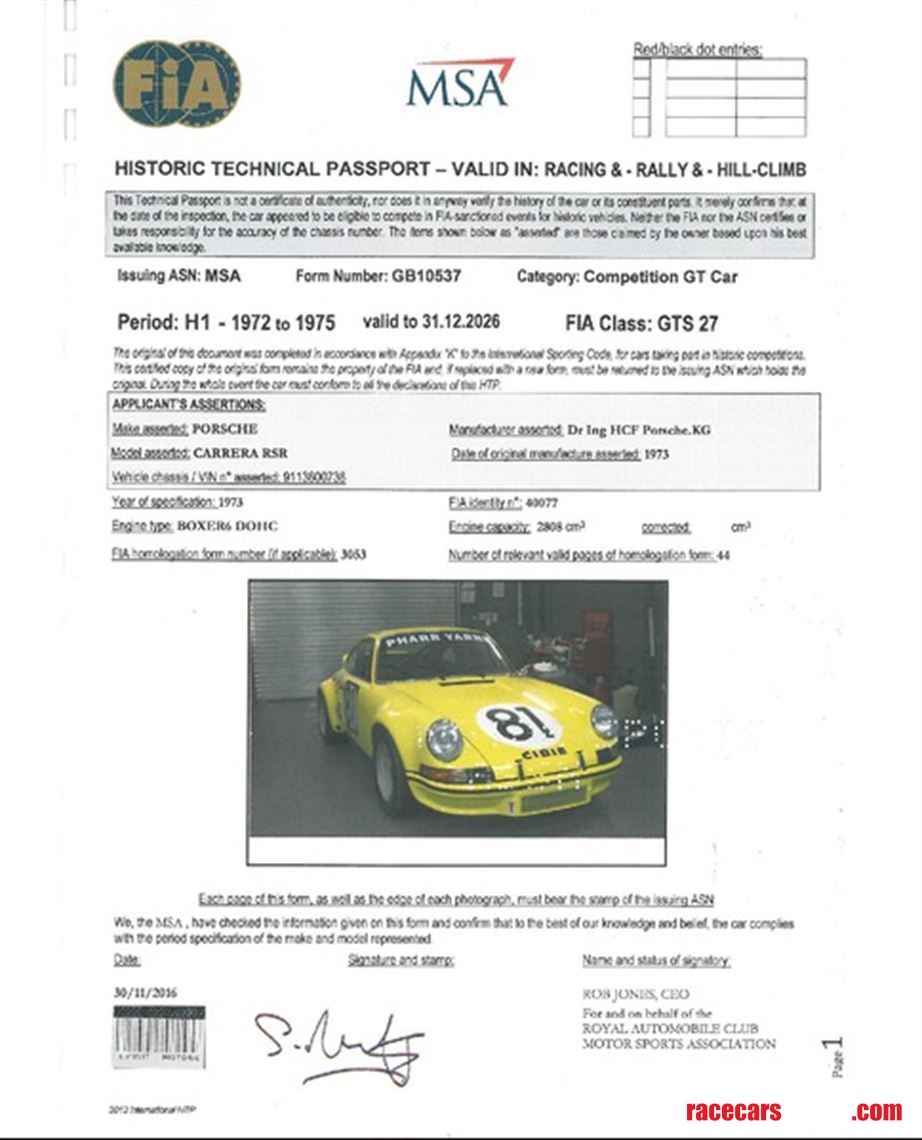 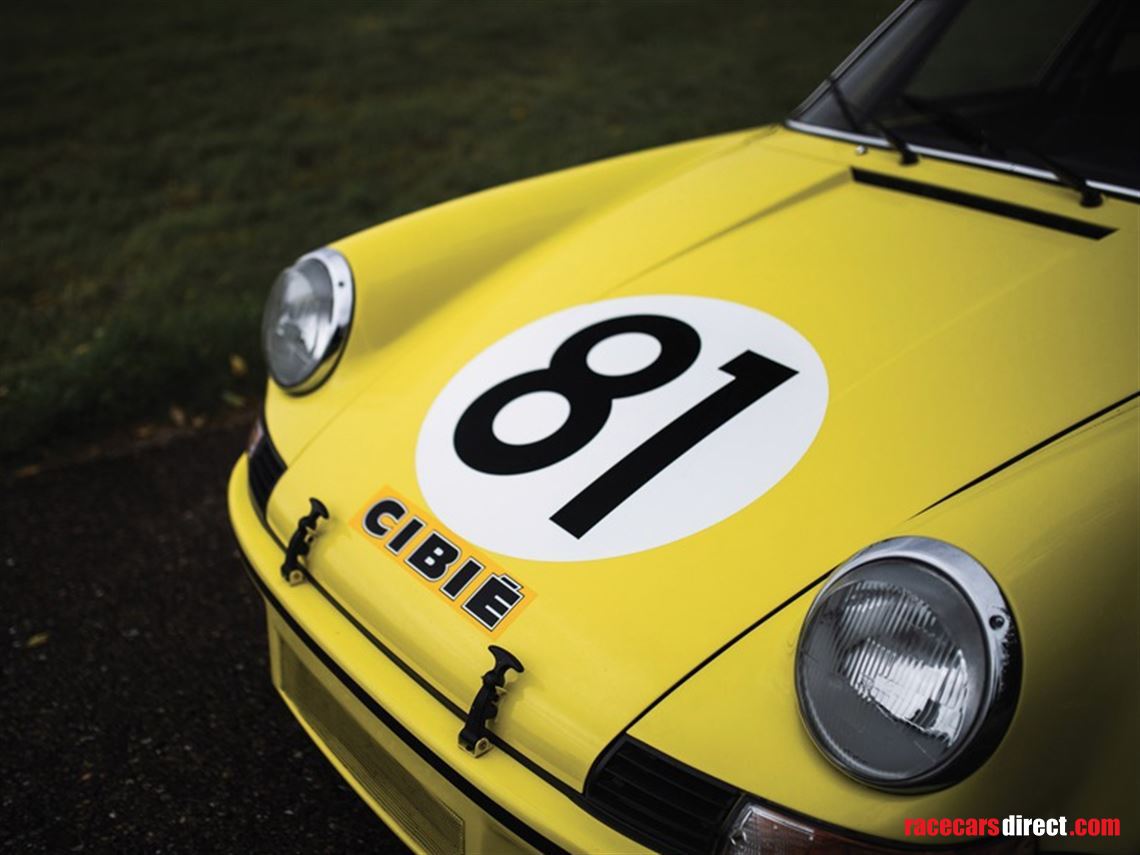 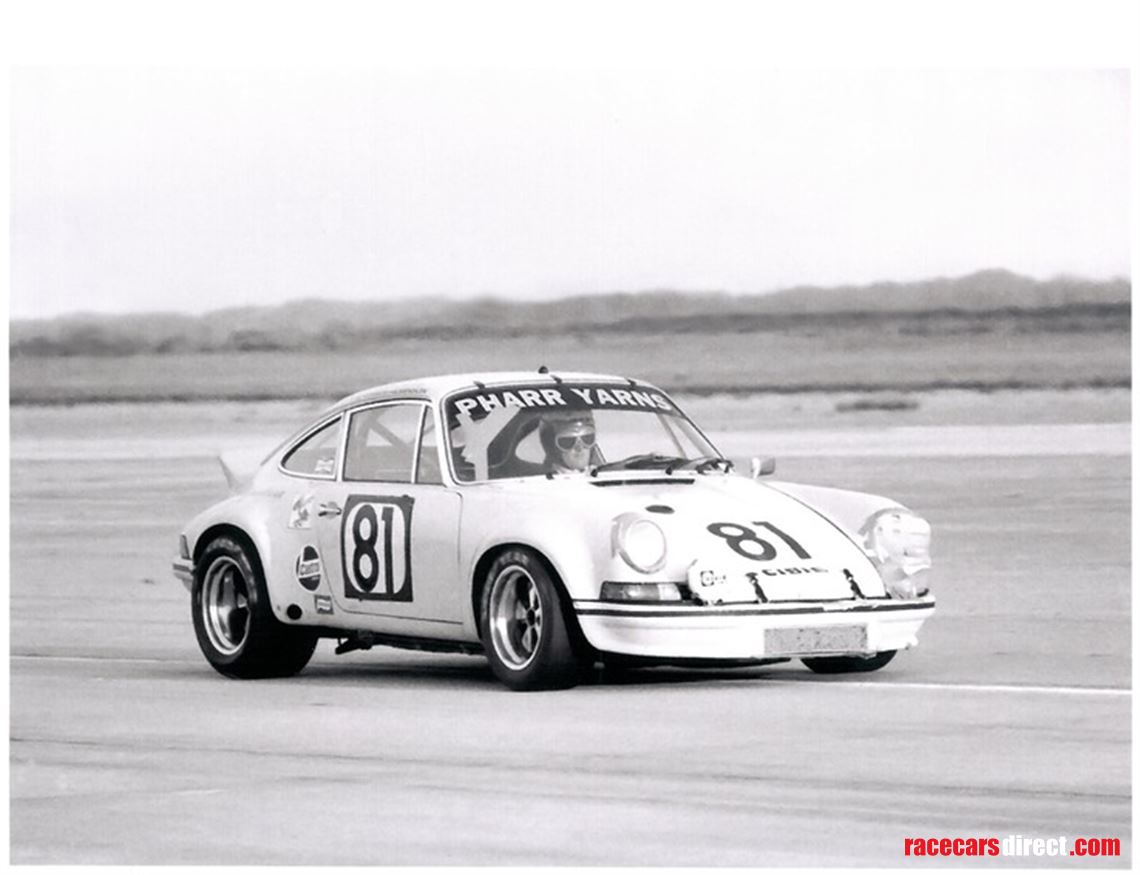 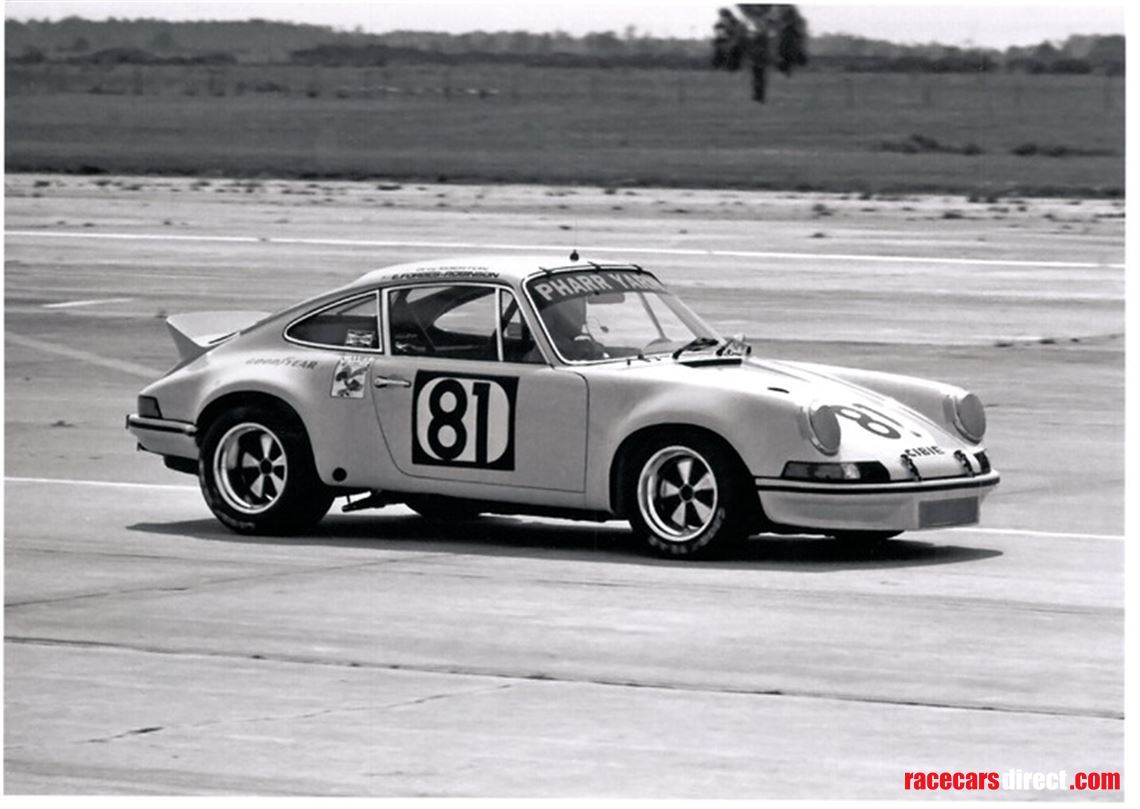 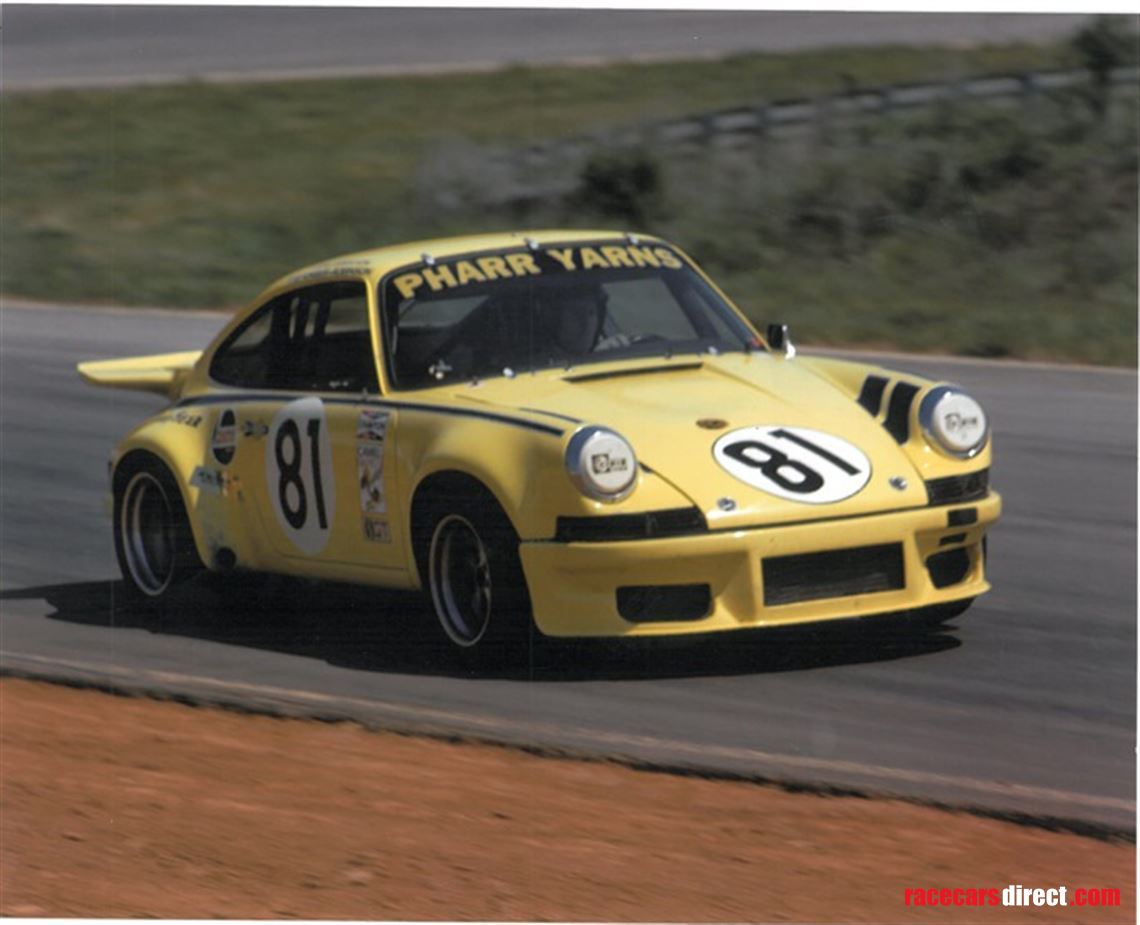 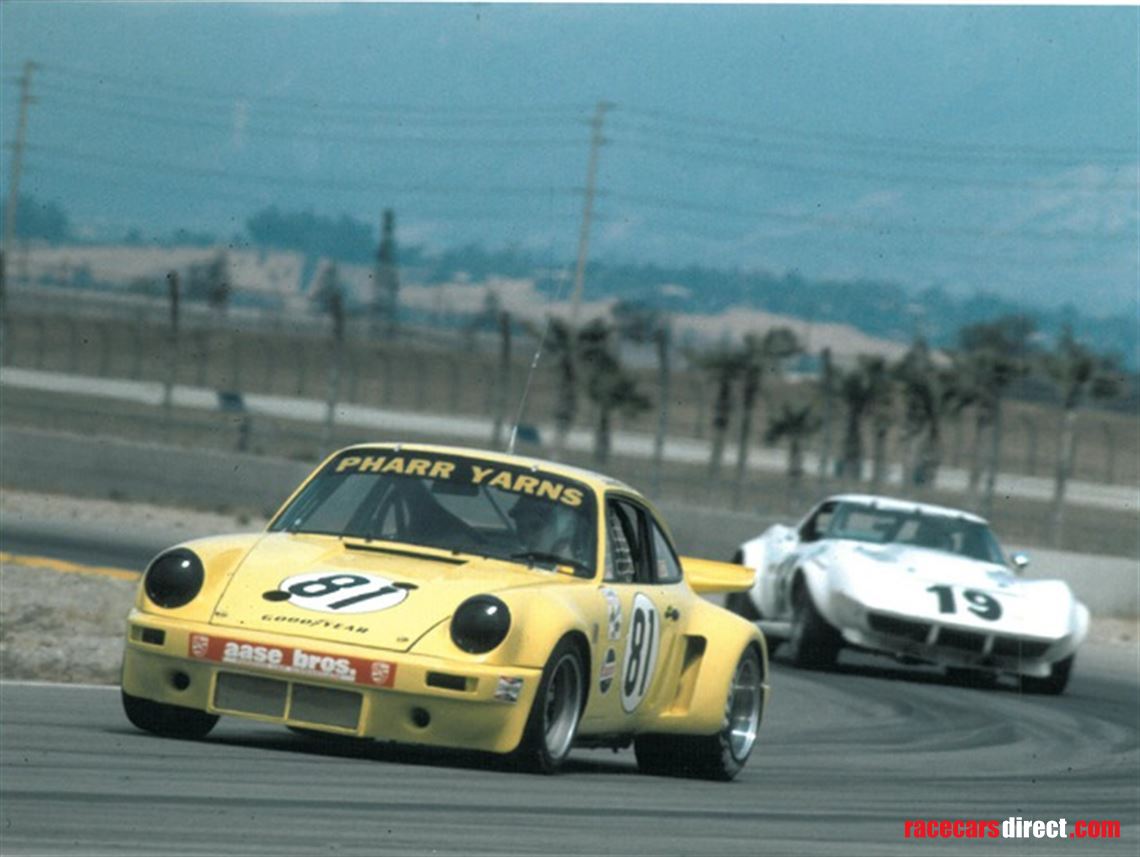 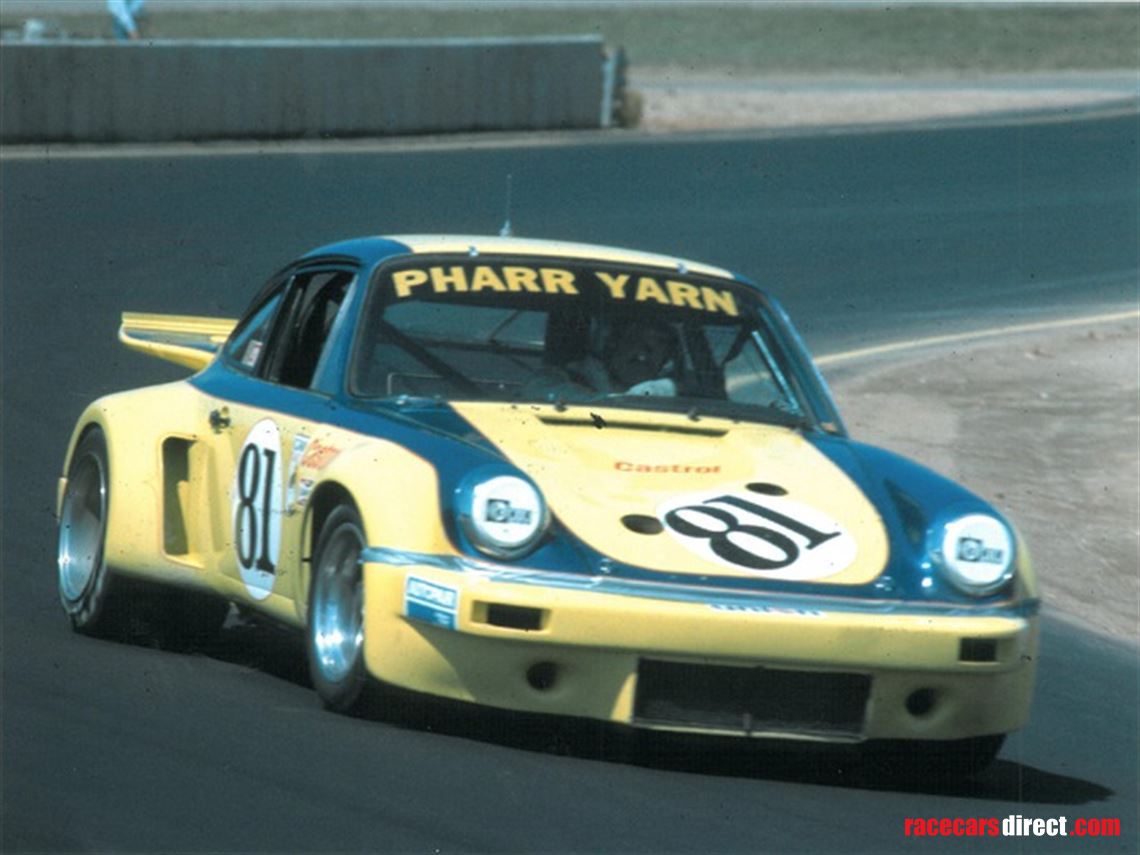 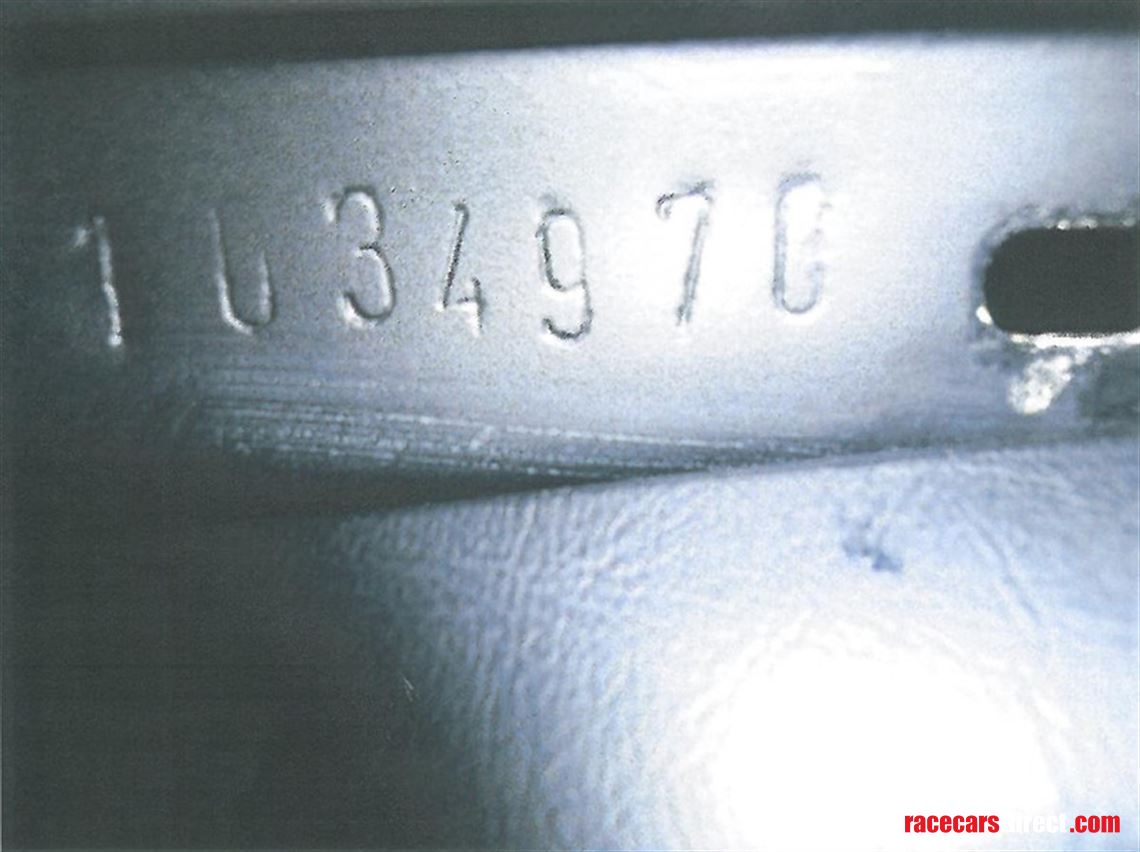 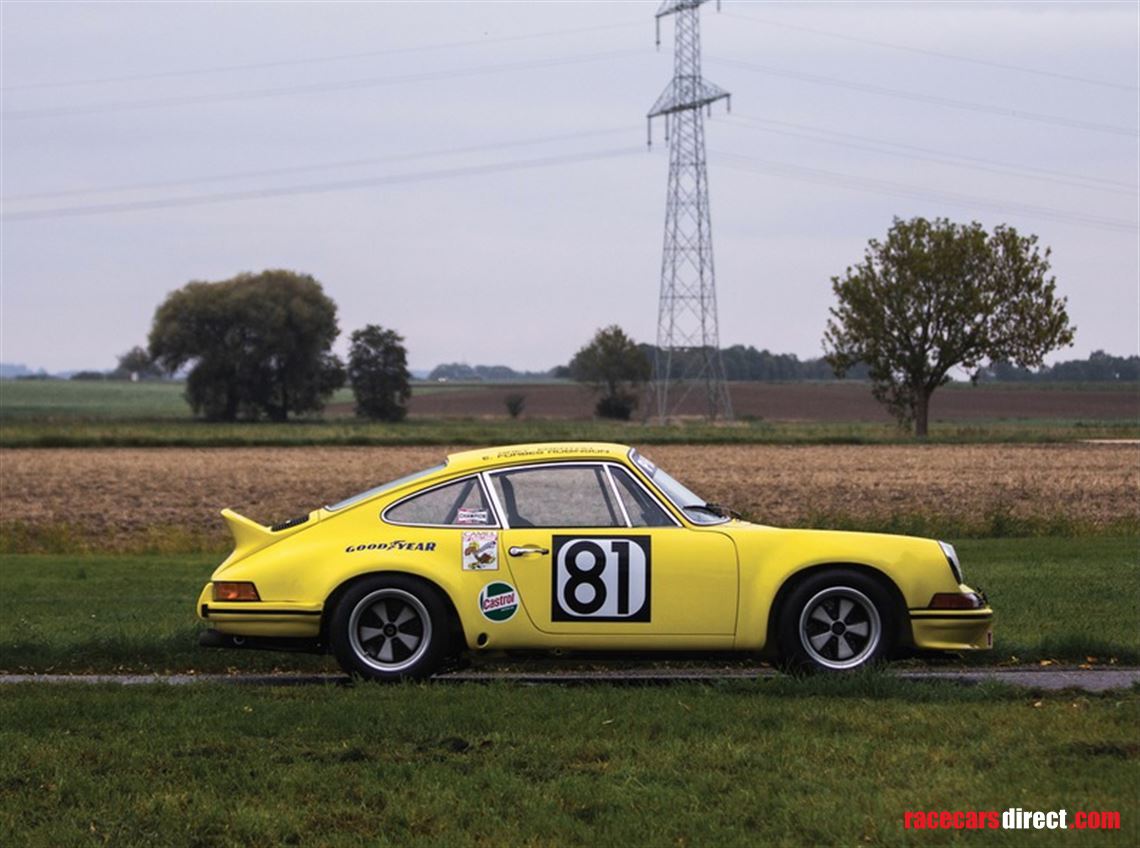 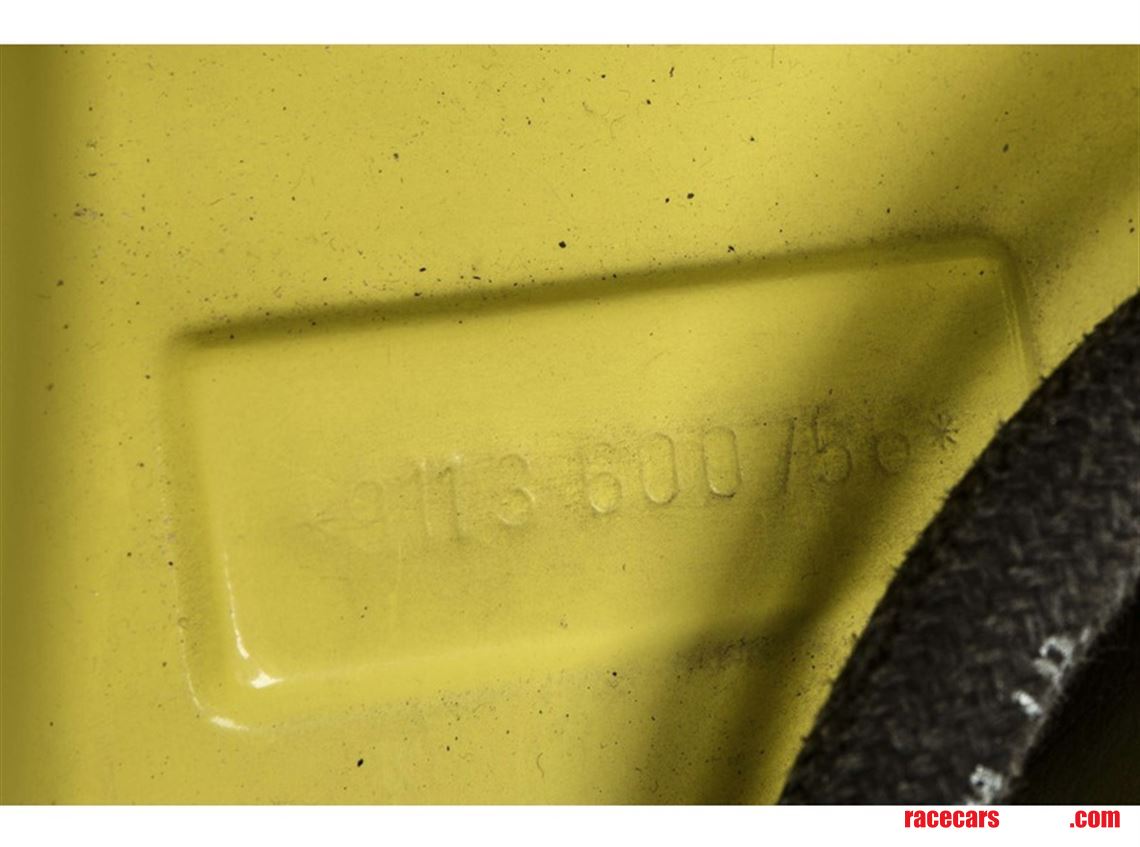 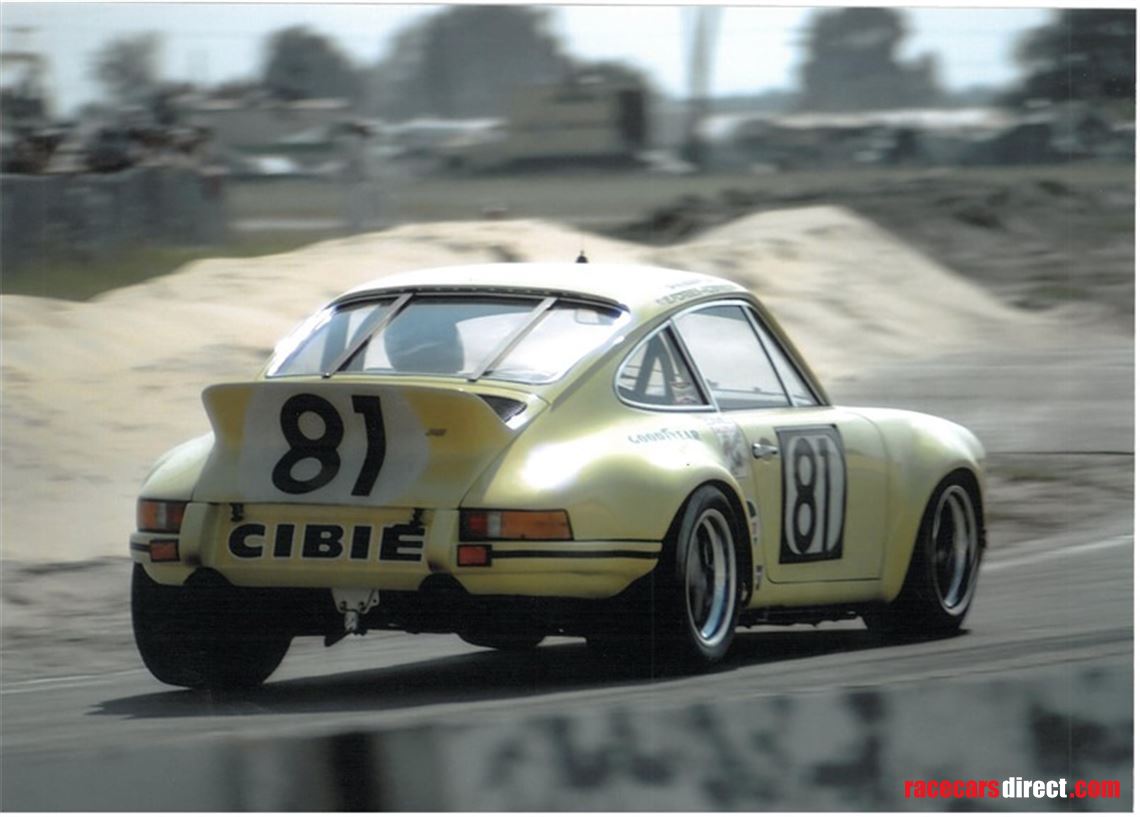 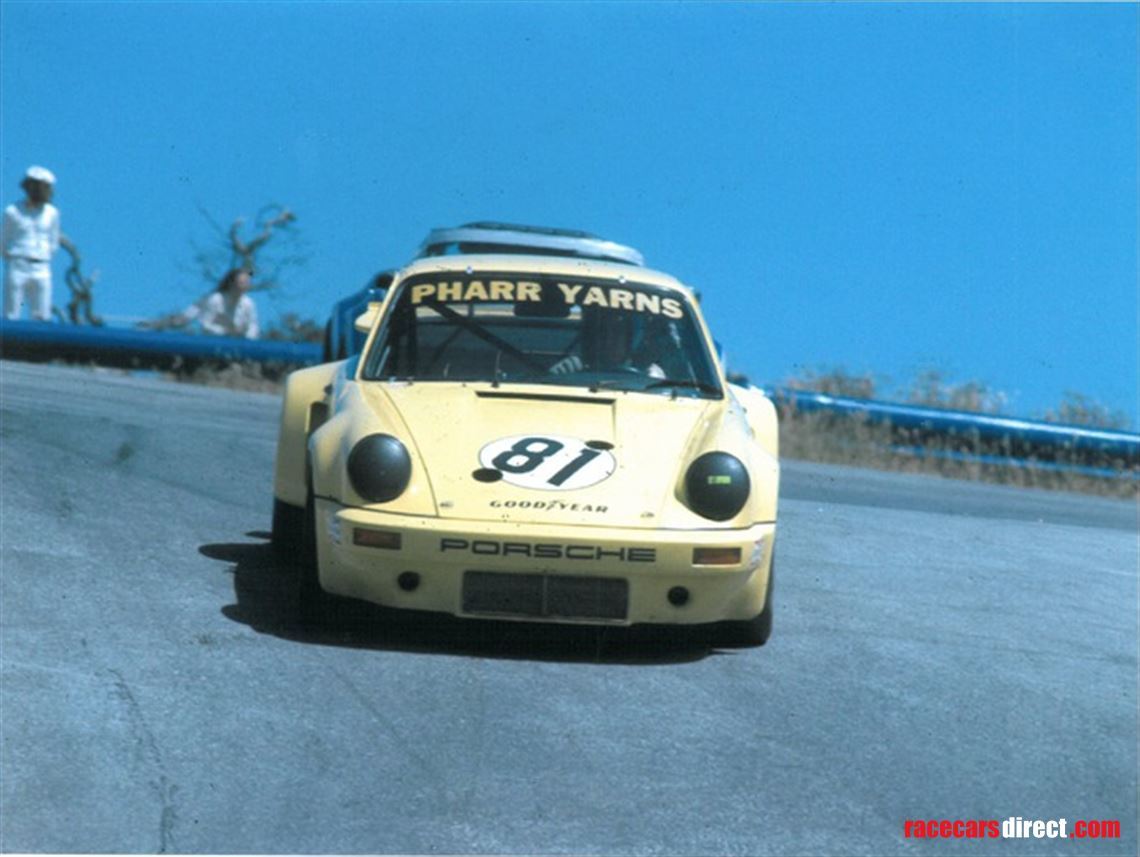 While leading the 1972 European GT Championship with its Porsche 911 S(T), Porsche decided to develop a new race car for long-distance GT racing in the 1973 season. For this, they took a select few cars – 55 in total - from the Carrera RS 2.7 production line and turned them into full M-491 optioned “Renn Sport Rennen” (RSR) configuration. Despite already being “lightweight”, a further 80 kg was trimmed from the 2.7 RS, the engine capacity was enlarged by 119cc to 2.8 liter with bigger valves, twin-plug ignition, raised compression ratio, and extensive lightening of internal components contributed to an impressive performance of over 300 bhp. Wider Fuchs wheels and wheel arches, as well as a low-level front air dam with integral oil cooler, gave the RSR a much more aggressive disposition. The suspension refinements and a 917-based braking system greatly enhanced handling and drivability while the RSR’s chassis was strengthened in three key areas at the rear of the car to cope with the demands of high speed racing.

One of just 55 RSRs constructed for the 1973 season, chassis no. 9113600756 was completed in February of that year in a striking yellow color carrying engine nr 6930114 and gearbox nr 7931024. It was immediately entered into the 12 Hours of Sebring in March by new owner Grey Egerton of Costa Mesa, California. Entered by Far West Racing, and with sponsorship from Pharr Yarns, Castrol, and Cibie, Egerton was partnered with SCCA and Trans Am rising star Elliot Forbes-Robinson, who had shown such promise at Le Mans in 1971 after qualifying his 911 S fastest of all the GT class Porsche cars.

Egerton and Forbes-Robinson performed strongly, qualifying 7th overall with a best lap time just over a second slower than the Brumos car. In the race, the two Corvettes led from the start as expected, closely followed by the similar car of veterans Dave Heinz and Jerry Thompson. However, both cars would retire within three laps of each other, allowing the Brumos RSR to take the lead. In their new RSR, Forbes-Robinson and Egerton kept out of trouble with a consistent performance finishing 4th overall at the notoriously hard Floridian track which was an excellent start for their 1st race with the Porsche.

In July 1973, 0756 was entered for the Watkins Glen 6 Hours – then a round of the World Sportscar Championship. Unlike Sebring, the race featured a full complement of Works 3.0-liter sports prototypes, including three Ferrari 312 PBs, two Matra MS670Bs, and two Gulf- Mirage M6s. Pitched against the mildly renamed Pharr West Racing RSR in a strong Group 4 GT field were four Ferrari Daytona competition cars, seven Chevrolet Corvettes, and six other RSRs. In qualifying, it was the Keyser/Minter Toad Hall RSR which took the class pole, with Egerton/Forbes-Robinson 5th in class – albeit within half a second of Al Holbert’s similar car in 4th. During the race, the sonorous Matra of Larousse/Pesarolo took overall race honors ahead of the two Ferraris of Ickx/Redman and Merzario/Pace, while in the GT class the Pharr West crew enjoyed another solid run to finish in 11th place overall and 3rd in class.

After some more races during the 1974 season, Egerton sold the car to longtime Porsche expert Jim Cook, who continued to compete with it in the IMSA GT Championship for some years. As was the case with many 2.8 RSRs, 0756 was uprated with 1974 RSR bodywork and with an ex-IROC RSR 3.0 liter engine.

Following the conclusion of its contemporary racing career in 1979, 0756 was sold to George Eckert of New Orleans, who restored the car but does not appear to have raced it. In 1986, ownership passed to Lloyd Hawkins of Rennsport Racing, also of New Orleans, who returned the car to “as-delivered” 2.8-liter RSR specification. The car was used sparingly by Hawkins and was subsequently sold to Porsche broker David Mohlman, who again preferred to use the car for show purposes. After passing through the hands of two further U.S.-based owners, the RSR returned to Europe in 2013, and since then it has been used only on the road and for concours events, including the prestigious 2015 Salon Prive Concours d’Elegance at the Blenheim Palace and 0756 was subsequently bought by the current owner in 2017.

At the end of 2015, marque expert Andrew Prill of Prill Porsche Classics inspected the car, and a written comprehensive report of his findings is included in the car’s file. The report identified that the car retains is original chassis and production number, as well as the original VIN plate and all the strengthening features particular to RSRs. Furthermore, 0756 was found to be fitted with the correct specification RSR “high butterfly” engine and with its original gearbox, as well as numerous other original RSR features, including the oil tank and oil system, gearbox oil cooler, brake calipers, pedal box, 110-liter fuel tank, trailing arms, and anti-roll bar.

During the last few years the car – in its stunning Pharr Yans race number “81” livery as raced in 1973 - has been used very sparingly and is in excellent condition throughout. Chassis no. 9113600756 is a beautiful example of the exceptionally rare and sought after 911 2.8 RSR variant and is ready for action in any of the prestigious historic race and rally events for which it is highly eligible.