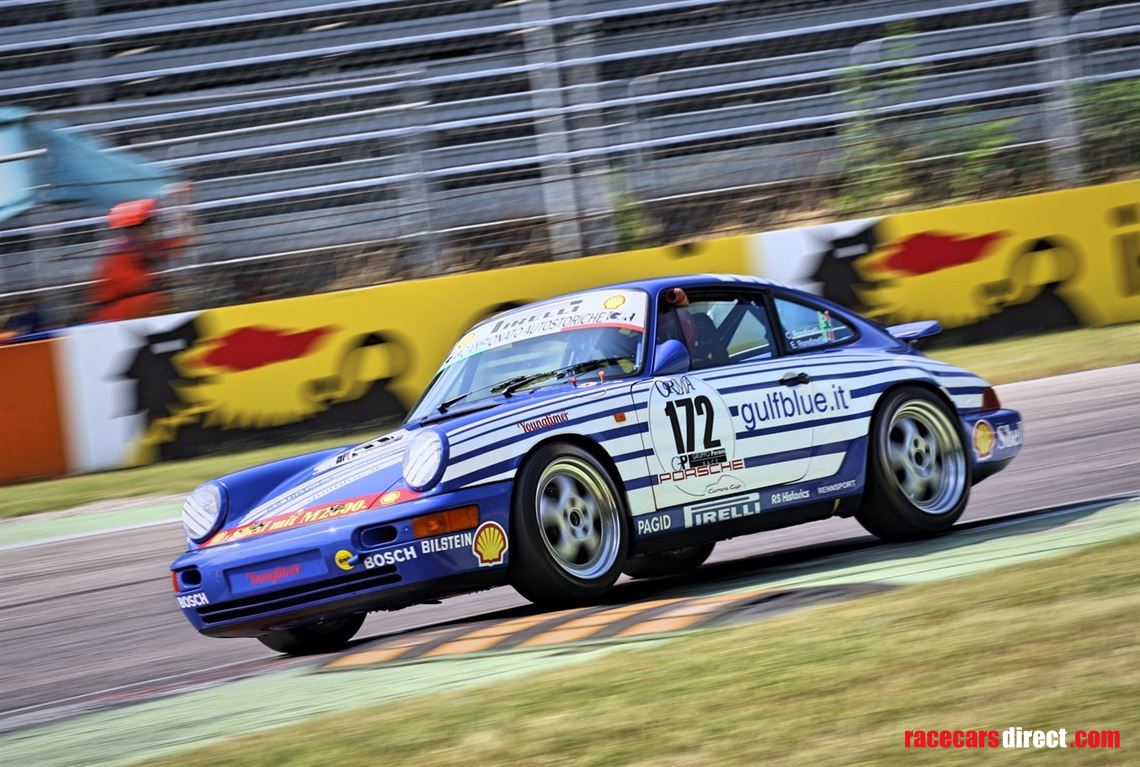 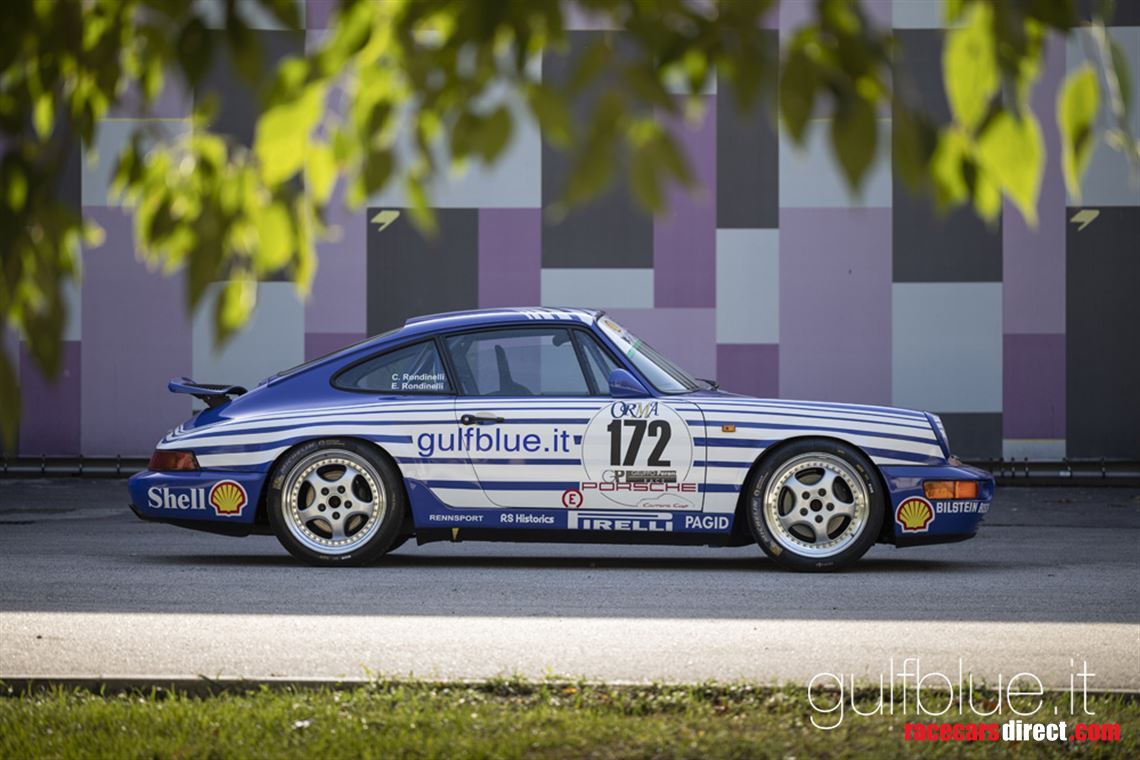 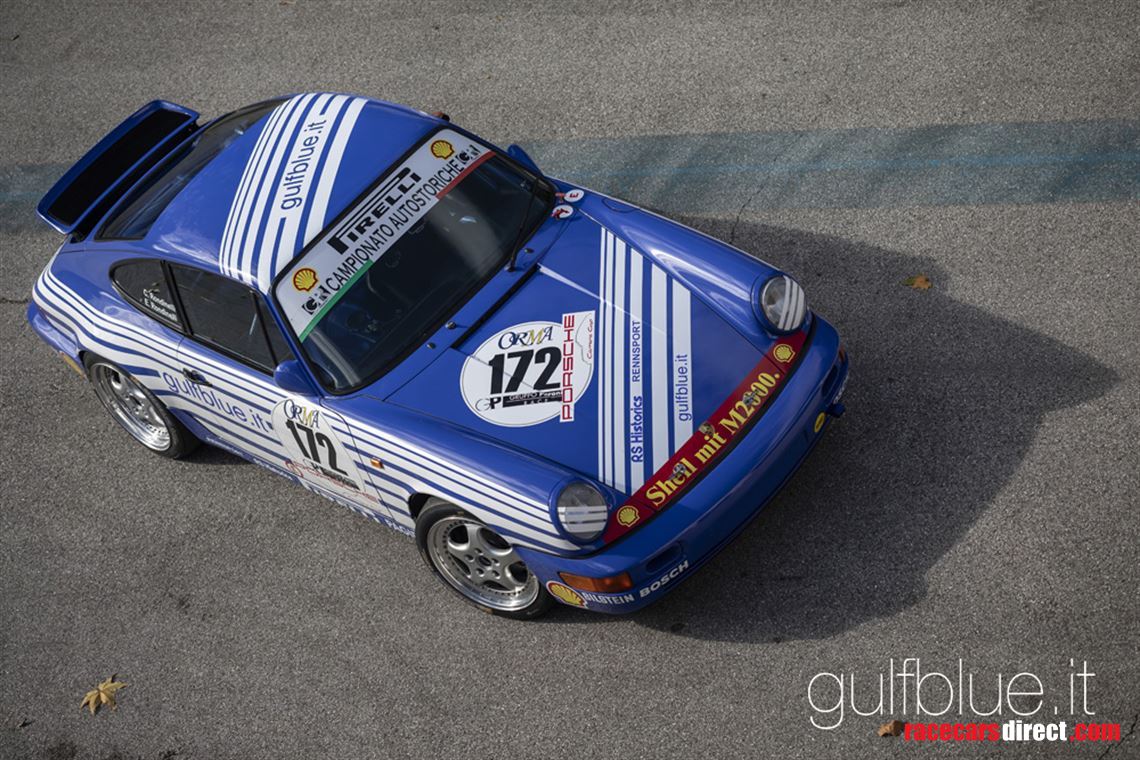 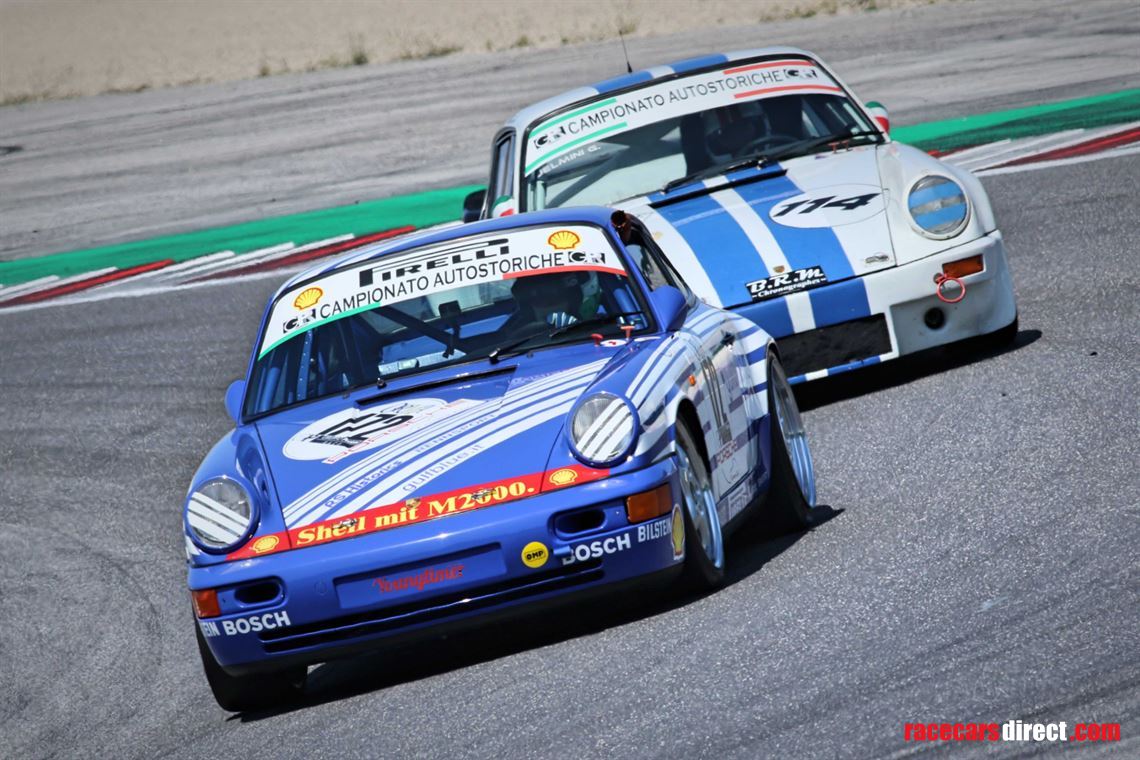 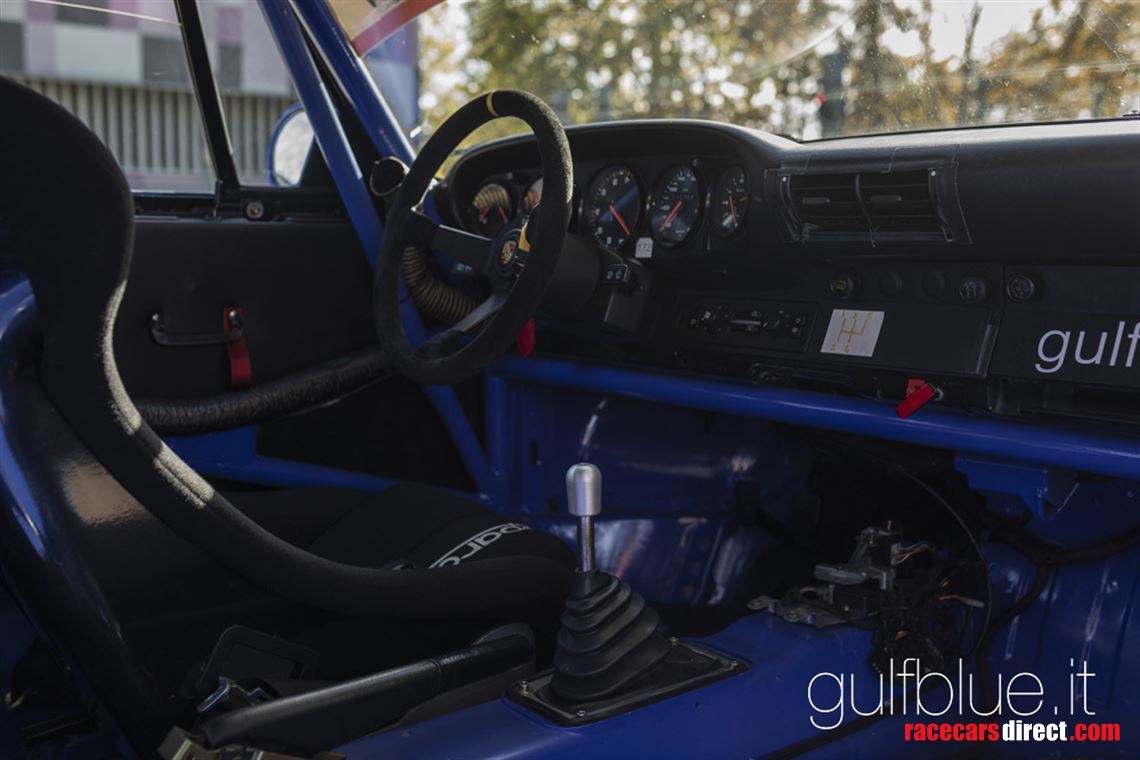 1990 Porsche 911 Carrera 2 (964) with Group B specs, prepared and cared with lot of love, that we drove in 2018 and 2019 Italian Historic Cars Championship, winning our category. It is the youngest 911 elgible on historic races: til now Cup, Trophy and single make championship cars weren’t allowed among historic cars, so our vehicle has been prepared according to Group B specs, pretty similar to the 911 Carrera Cup, which debuted its 29 years old career in 1990 with the 964 model.

We started a “tour de force” on this car in January 2018 in order to be ready for the upcoming seasion, with the fundamental help of Rennsport workshop and RS Historic racing team: rolling chassis to bare metal, reinforced and equipped with the latest specs (T45) welded in Custom Cages rollcage, fully repainted in Maritime Blue, original Porsche paint, and fully remounted to be on the grid of the opening seasion race in April 2018.

This chassis is very very strenght and light: now the car weights 1110 kgs but the minimum admitted by Appendix J is 1180 kgs, reached with ballasts.

The car could be converted to Carrera Cup specs , upgrading the brake system (with drilled discs and larger brake calipers), taking off the ballast and fitting the 17 inches wheels.

FIA HTP expiring in 2028, road registered in Italy with ASI (Auto Moto Club Storico Italiano) certification. During the racing season many magazines and websites dedicated articles and mentioned the car, thanks to the originality of the project.we can send a detailed documentation of the works done.

This 964 Group B has the typical behaviour of the classic 911s, with the engine in the “wrong position” and a lively rear-axle if you don’t drive it with respect: on the contrary, if you can expect its reactions, this 911 can be the ideal mate for fast laps and endurance races, even thanks to the silm silhouette and the flat bottom that can split the air.

The continuous braking together with a good balance at high speed and good torque starting from low revs balance out with the weight of the car. Even at 30 years old, the 964 is still a demanding but pleasant car: no electronic devises – except from the ABS – but a good sensibility is needed to drive fast this car.

The new 964 model entered slowly in motorsport beacuse in late 80s most of the winning race cars were Touring ones; Starting from 1986 Porsche developed the 944 Turbo Cup as the the car designed for customers cars who attended the single make championship.

However drivers still preferred the 911, the one and only sports cars availavle to give tremendous sensations and great race results. So, having been the 3.2 Carrera model never used for racing purpose, instead Porsche with the 964 decided to go back racing.

The 964 represents the first model of the modern hera of the 911: even it seemed to be still the same, underneath it was redesigned in the 87% of its components – compared with the 3.2 – so it had a great potential. In 1990 the single-make championship Porsche passed from the 944 Turbo to the brand new 911 Carrera Cup: these cars for motorsport purpose were Carrera 2 (so two wheel drive), lightened, with 17” wheels, stiffer suspension setup, short gear ratios and many other racing solutions. Behind the wheel of the new Cup tens of race drivers filled the starting grid of the major european racetracks and aimed a memorable season: it has been the first season of the Carrera Cup the after almost 30 years is still raced with the moderns GT3 Cup, but with the same competitive spirit.  Hezemans, Manthey, Alzen, Jarier and Beltoise are some of the famous drivers that raced with the 964 Carrera Cup.

Being the Cup a race car designed uniquely for the Porsche championship it never obtained an FIA homologation form so it never officially entered international competitions. But, thanks to the good performances of the cars in the Carrera Cup Championship, at Porsche headquarters in Zuffenhausen the 1st September 1990 were homologated both version of the 911, the Carrera 2 and Carrera 4 (4WD) in Group B category.

Period FIA regulations allowed the 911 to be homolgated just as a Group B, with deep restrictions and no specific component which wasn’t derived by the standard production (due to the fatal accidents of Gr. B cars in the 1986 World Rally Championship season).

So at the end of 1990 few 911 Carrera 2 raced the 24 hours of Spa-Francorchamps and other national races, not officially supported by Porsche, just as privateers: in Italy these new 964 raced the Targa Tricolore Porsche championship organized by Porsche Club Italy. Someone even decided to use the Carrera 4 in some rallies, where the 4 wheel drive transmission could be helpful, but the weight definetly not!

In September 1991, after 18 years, Porsche introduced a new Carrera RS based on the 964: it was the street legal version of the Carrera Cup which in the meantime was tested for the latest two racing season; the Carrera 2 Group B was so replaced by the new RS, a lucky and performing race car, evolved in 3.8 RS and RSR, as for its ancestor 1973 2.7 Carrera RS.

The car could be seen by appointment in Bologna. (ITALY)